Camping at the Meadows Campground on Rabbit Ears Pass on Monday night enabled me to return to the Yampa River within the town of Steamboat Springs for another day of fly fishing, and my arrival time was much earlier, than when I began on Monday. In retrospect the morning fishing was superior to the afternoon, and this cast my results from Monday in a new favorable light.

Unlike Monday, a storm never developed, so the sky was mostly clear, and the thermometer peaked in the mid-eighties. The river was down in the 600 – 650 CFS range, and this translated to easier although moderately challenging wading. The lower flows also meant that the fish spread out more, and I landed several from mid-river lies behind large boulders that served as current breaks.

Tuesday developed into my best day of the year on the Yampa River. The first seven landed trout were in the thirteen to sixteen inch range, and I was quite pleased with this result. For the entire day eight trout measured in that range, and another was a surprise ten inch brook trout. I fell a cutthroat shy of a traditional grand slam, unless the rules allow a cutbow and rainbow as separate species. In addition to the fish tally my fly supply was not depleted to the same magnitude as Monday, although I managed to break off the one remaining olive ice dub chubby Chernobyl that remained in my possession.

I decided to cover the south bank of the Yampa in town for the second day in a row, but the game plan included more rapid movement in order to reach the river section above the Fifth Street Bridge. I never made it to that point on Monday. 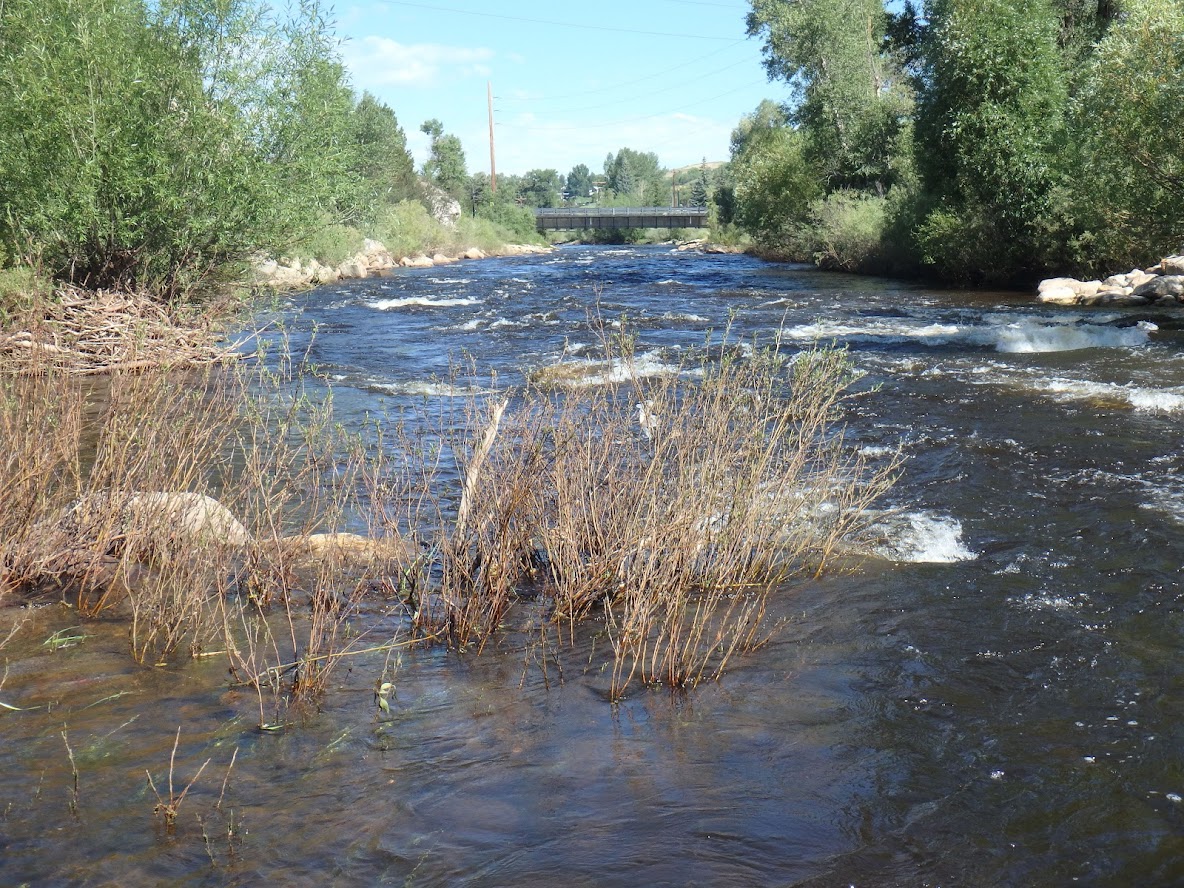 Looking Back Toward the Hot Springs

I began with a Chernobyl ant and trailed a dubbed peacock stonefly and hares ear nymph, and my starting point was above the fast section upstream of the hot springs. Within the first thirty minutes I landed a feisty fourteen inch rainbow and a gorgeous fifteen inch brown trout. The rainbow gobbled the stonefly, and the brown took the hares ear. The brown wrapped the leader around itself in an effort to escape, and at first I thought it was foul hooked, but eventually while resting in the net, it was obvious that the small nymph fooled the wily brown. 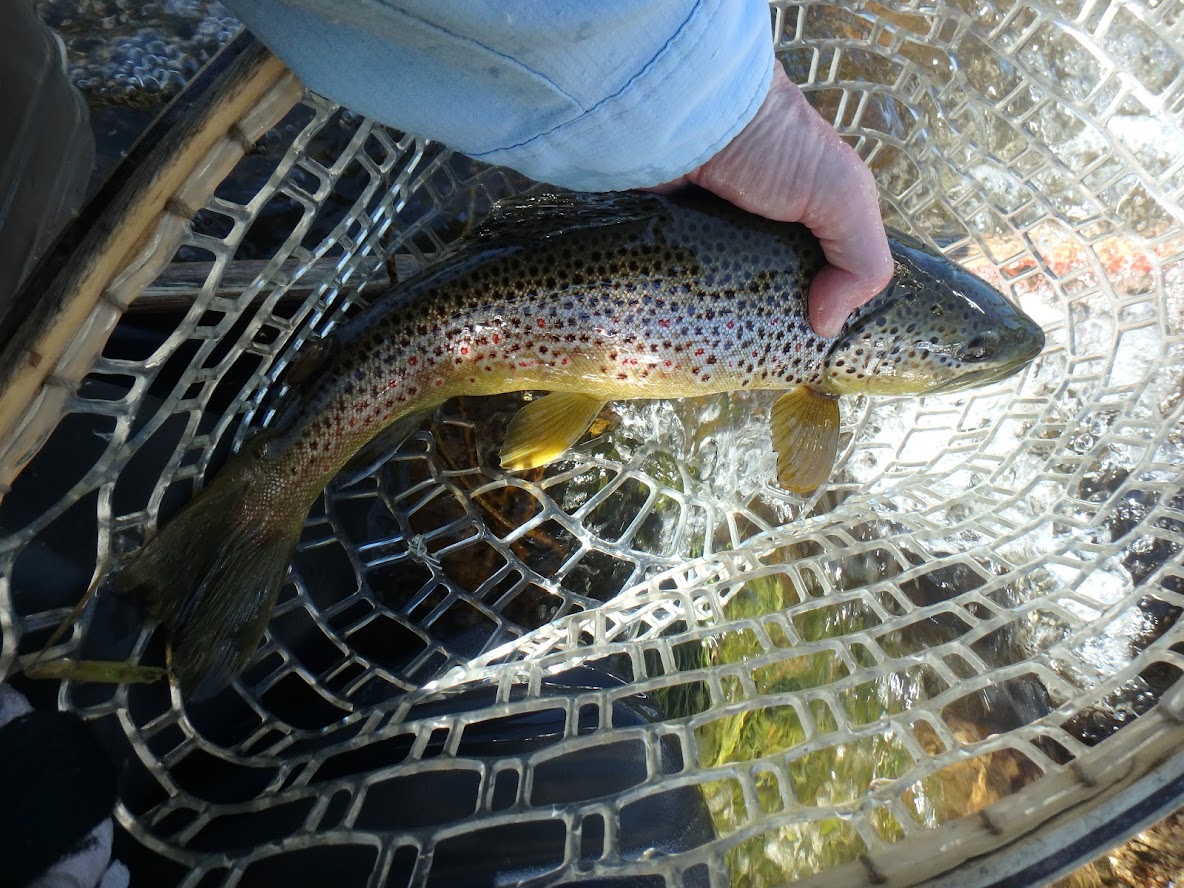 Early on I exchanged the Chernobyl for a yellow fat Albert, as the low riding foam attractor was difficult to track in the glare from the eastern morning sun. After the first two fish I suffered a bit of a lull, so I switched to the olive ice dub chubby Chernobyl that was on fire on Monday. In addition the peacock stonefly was not producing, so I reconfigured with the hares ear placed in the upper position and the salvation in the end spot. This combination clicked in the 11AM to 1PM time frame, and suddenly the salvation was the fly of choice. Initially the chubby served as an indicator, and it was quite adept at that function. The foam made the fly very buoyant, and the double poly wing when coated with floatant rode high above the water. A grab of the nymph caused the wing to slide under the surface in a seductive manner, and this prompted an instant set. During this time I could count on a nice fish in all the obvious holding lies. 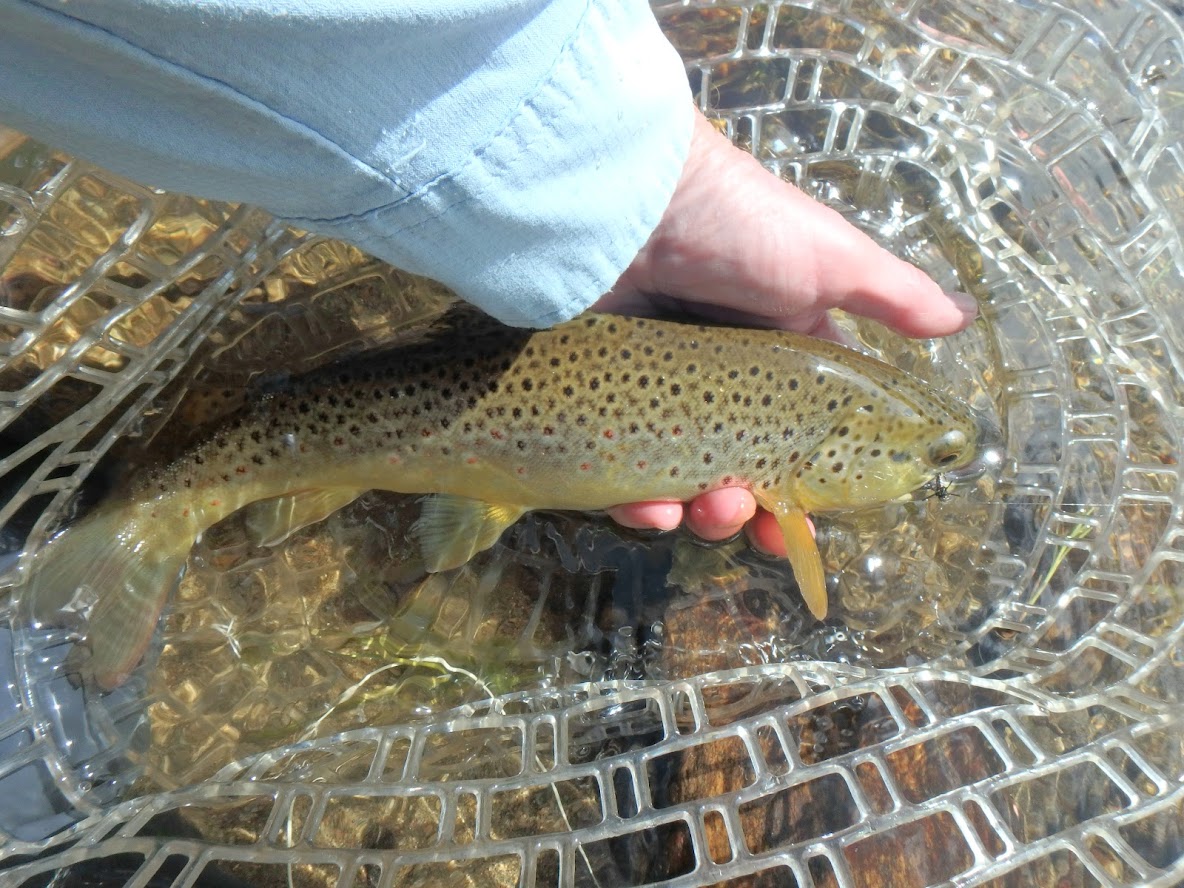 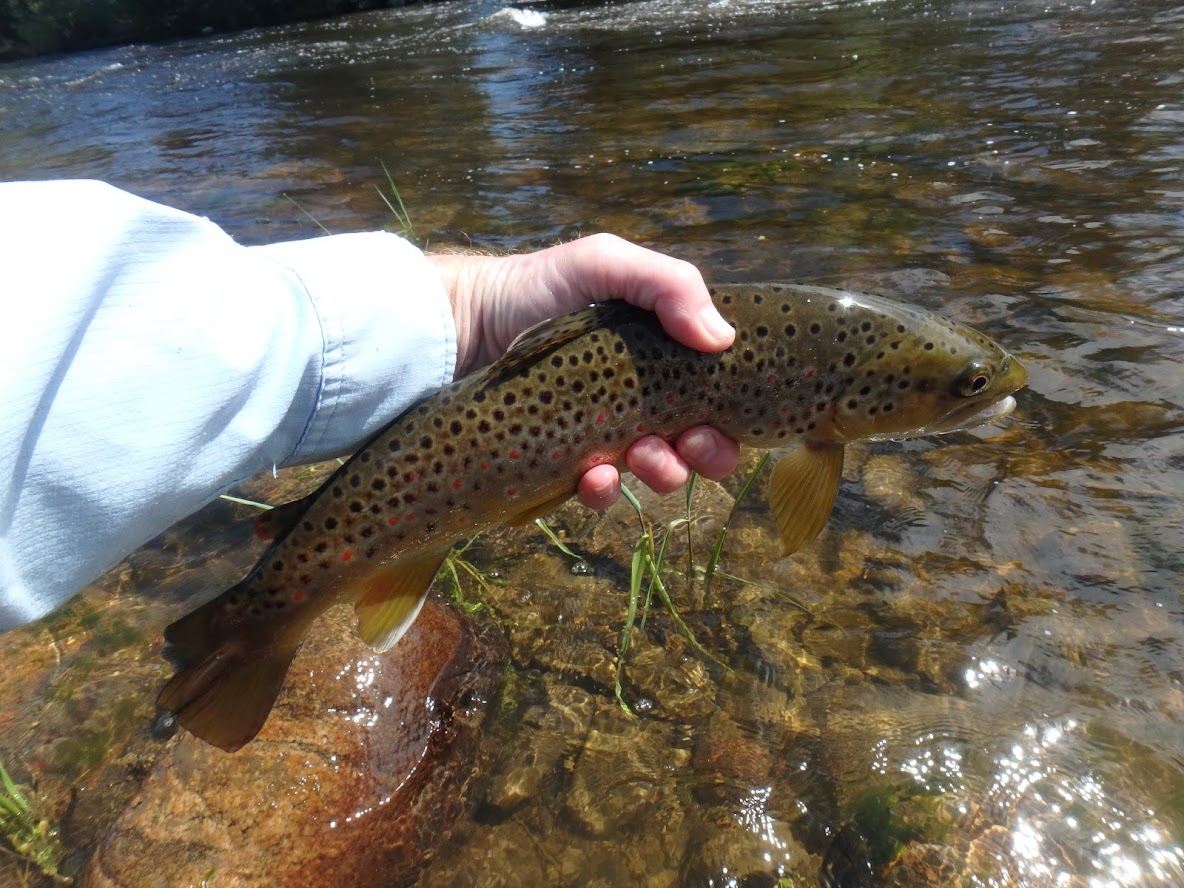 The fish count increased from two to seven, and as mentioned earlier all were very nice strong fish. At the count of seven the fish began to show interest in the chubby, and initially this manifested itself with a pair of refusals, but then an eleven inch rainbow grabbed the salvation, and a respectable brown smashed the chubby. I had visions of another chubby Chernobyl blitz, when I was beset with a dose of misfortune. A nice rainbow or cutbow elevated and nipped the chubby, and I quickly responded with a lift. This action resulted in a momentary connection, but then the fish twisted its mouth and the flies sprung free. The pent up energy in the rod catapulted all three flies into an aspen branch twenty-five feet above the ground. I tried to retrieve the flies with a long dead branch, but the limb was young and stiff, thus preventing me from breaking or bending it to recover my flies. I had no choice but to apply direct pressure, and my precious remaining ice dub chubby remained dangling from a tree along the Yampa River along with two nymphs. 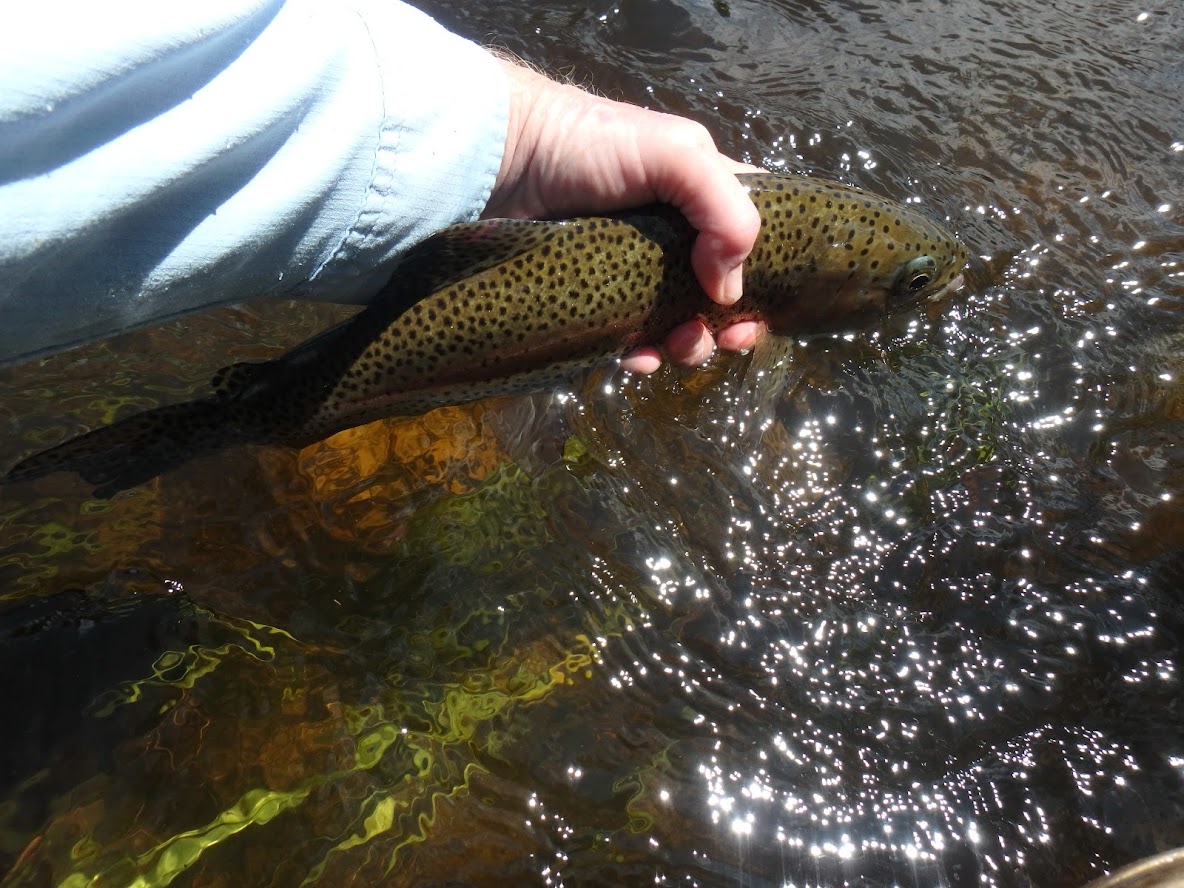 My fly fishing continued, but I could not resurrect the magic. While I ate my lunch next to a small thirty foot run, I spotted several fluttering stoneflies and a rise, so I removed the dry/dropper elements and tested a size twelve yellow stimulator. It immediately generated two refusals, so I downsized to a size fourteen and then a sixteen, but the fish were apparently wise to my trickery. 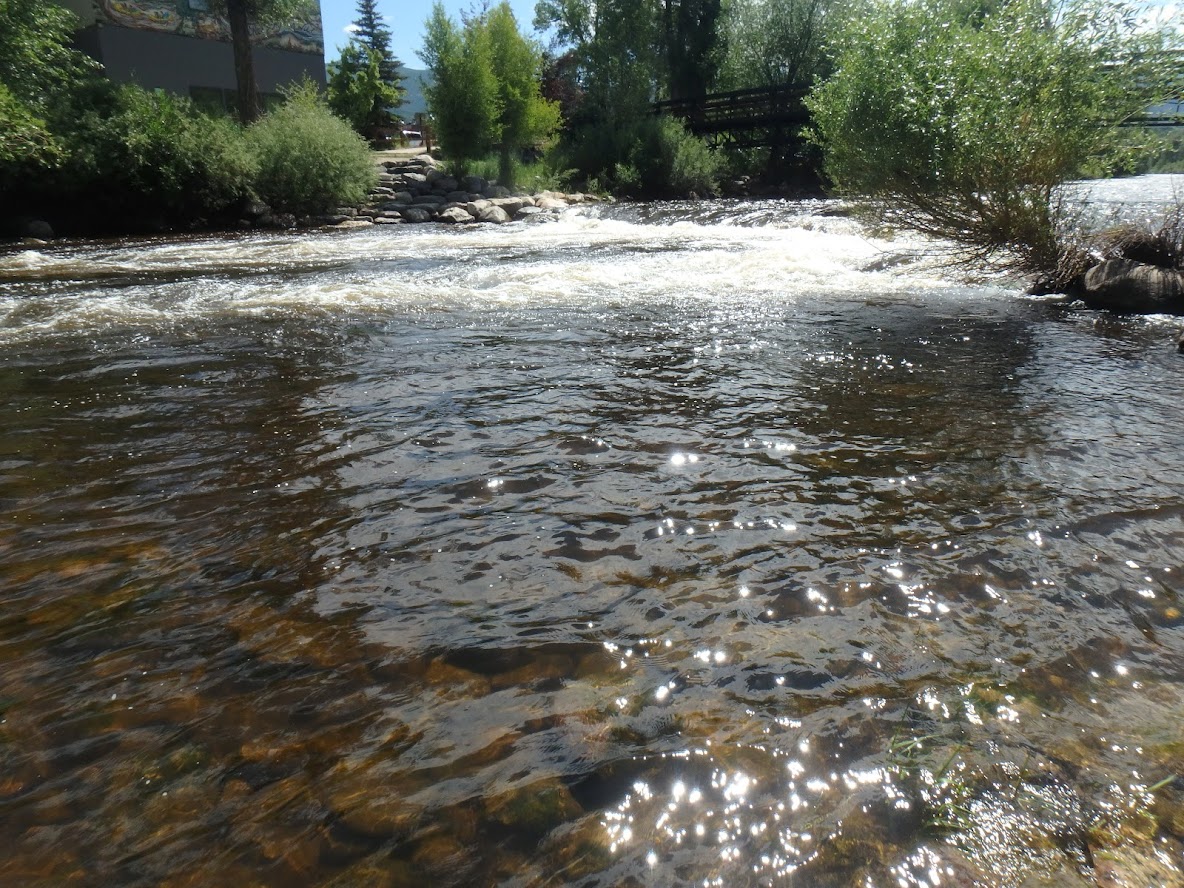 I vacated the troublesome run and returned to the size fourteen stimulator, and this fly produced trout numbers ten through twelve. One was a small rainbow and another was a nice thirteen inch brown. Both these trout slurped the stimulator on downstream drifts in a large midstream pool. Number twelve was a ten inch brookie, and it also fell for the stimulator.

The last hour of the afternoon was spent mostly above the Fifth Street Bridge. It seemed that the middle of the afternoon coincided with increased run off, and this reduced the number of attractive spots. I switched back to a dry/dropper with a standard Chernobyl ant, hares ear, and iron sally; but none of these flies were a hit with Yampa River trout. I finally reached the point where the river splits around a huge island, but after some fruitless casts and drifts below the confluence, I called it quits. 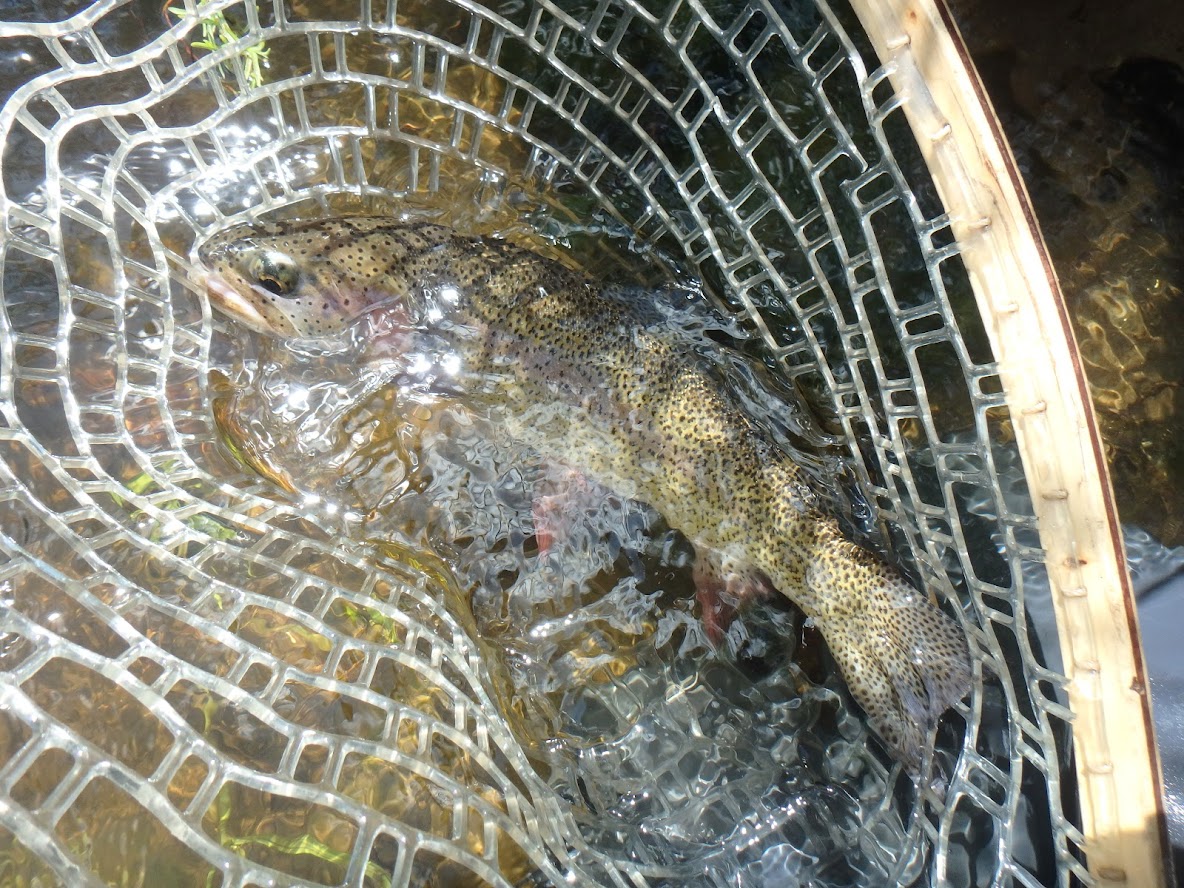 The afternoon was slow, but a twelve fish day including eight in the thirteen to sixteen inch range was a fine outing. I suspect this is the end of my Yampa River visits for the year barring an unexpected return in the fall. I love fly fishing the Yampa during high flows within the city of Steamboat Springs.