Tuesday, October 1, 2019 was a great day for kite flying and sailing. Unfortunately I was not participating in either of those activities. Instead I visited the South Platte River along with my friend, Steve, for a day of fly fishing. We were eager for an encore after our fun outing on 09/25/2019, as we envisioned masses of hungry fish gorging on a dense trico spinner fall. In advance of the scheduled trip I pulled out my canister of trico imitations and counted seven size 24 CDC versions, and I judged this to be a sufficient quantity for a day on the tailwater. In addition I moved three weighted trico spinners to my fleece wallet, in case I decided to experiment with a subsurface approach. The same canister that stored the size 24 trico spinners contained five size 24 midge emergers, and I speculated that these could also serve as trico emergers or crippled spinners. I deemed myself prepared and dreamed of a more successful day than that which entertained us on September 25.

I met Steve at his house in Lone Tree, CO; and I transferred my gear to his Subaru. Our early departure enabled us to arrive at the first bridge below Eleven Mile Dam by 9:40AM, and we quickly pulled on our waders and assembled our rods. I chose my Sage four weight, as it offered a stiffer spine and more length to battle the wind and in case of larger coldwater foes. The air temperature was in the mid-forties, and the wind gusted steadily, so I pulled on my light down coat, and I was quite pleased with the decision.

Several fishermen occupied the area just below the earthen bridge, so Steve and I quickly claimed some real estate on the upriver side. Steve grabbed one of his favorite positions on the left bank, and I ambled up the Spillway Campground Road on the right side, until I reached the shallow weir that spans the waterway. I noted very little surface activity in the early going, but I knotted a size 24 CDC BWO to my line, in case trico duns were making an appearance.

Some downstream drifts along the current seams below the weir produced a temporary hook up with a sub-six inch fish, but that was the extent of my success in the early going. After I thoroughly covered the faster water, I climbed the bank and moved upstream to an area just below a large bend. Some large rocks along the right bank created space for my backcasts, and some nice deep channels suggested the presence of large South Platte River trout. After a short period of observation I spotted several nice river residents, but they ignored my small blue winged olive dun. With the lack of obvious mayfly activity and the gusting wind, I concluded that terrestrials might be in demand, so I replaced the CDC olive with a size 18 black parachute ant. The ant actually generated a few interested looks, but eventually it was treated with the same disdain that was shown toward the BWO imitation. 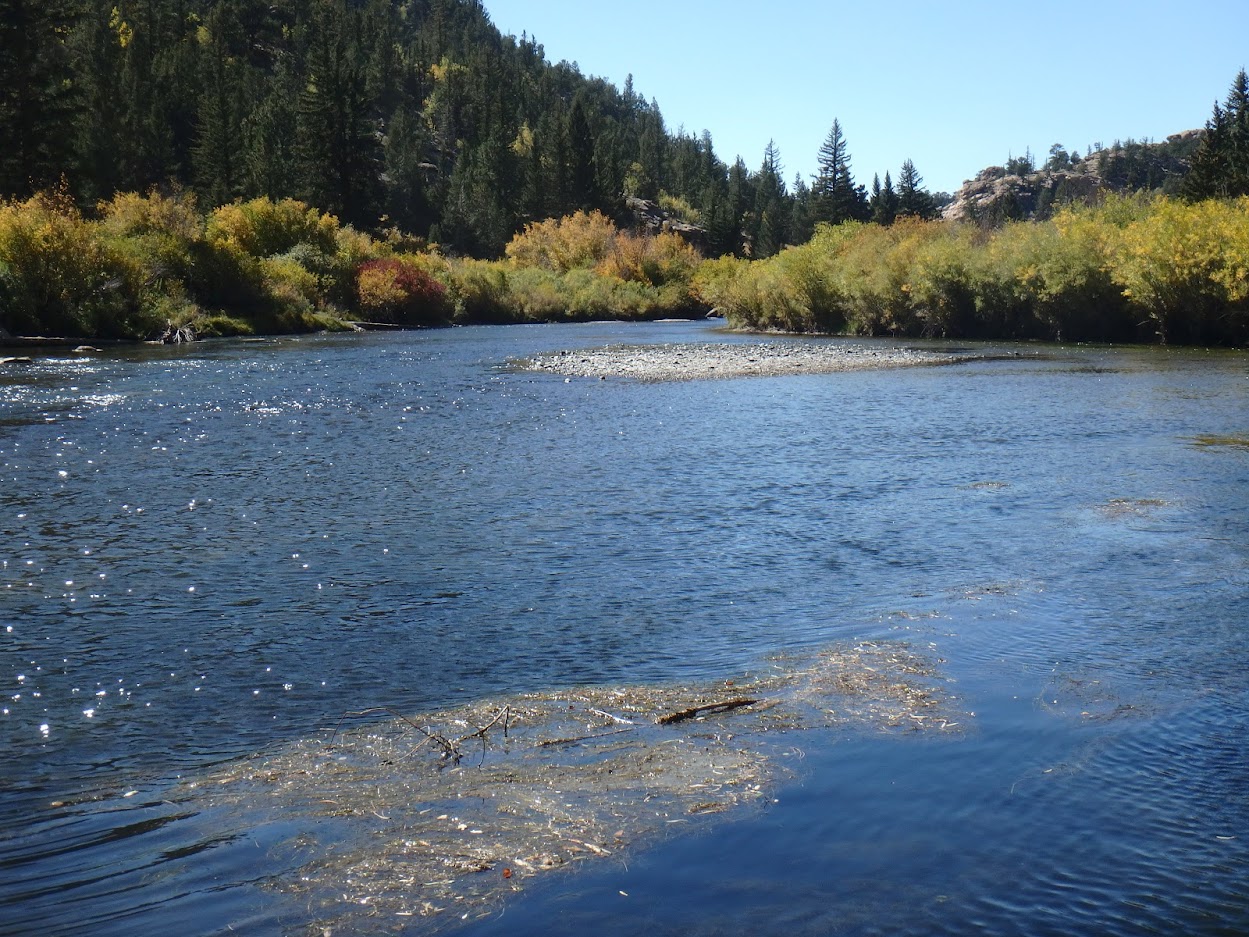 During this late morning time period the wind gusted relentlessly down the canyon, and I was very thankful for the retainer that was clipped to my hat. I was forced to reposition it five times, when the blasts of air directed it to Kansas. I paused my casting and turned my back to the wind on numerous occasions, and I was convinced that the tiny tricos would delay their mating ritual until calmer atmospheric conditions prevailed.

My confidence was quite low, when I decided to test a subsurface approach. Surely the underwater space was a sanctuary from the adverse weather above, and the trout were consuming abundant quantities of nymphs, emergers and drowned terrestrials. I knotted a size 14 Jake’s gulp beetle to my line and trailed a sparkle wing RS2 and sunken trico below it. My optimism elevated slightly, but after thirty casts and a couple refusals to the beetle, my mental state returned to despair. 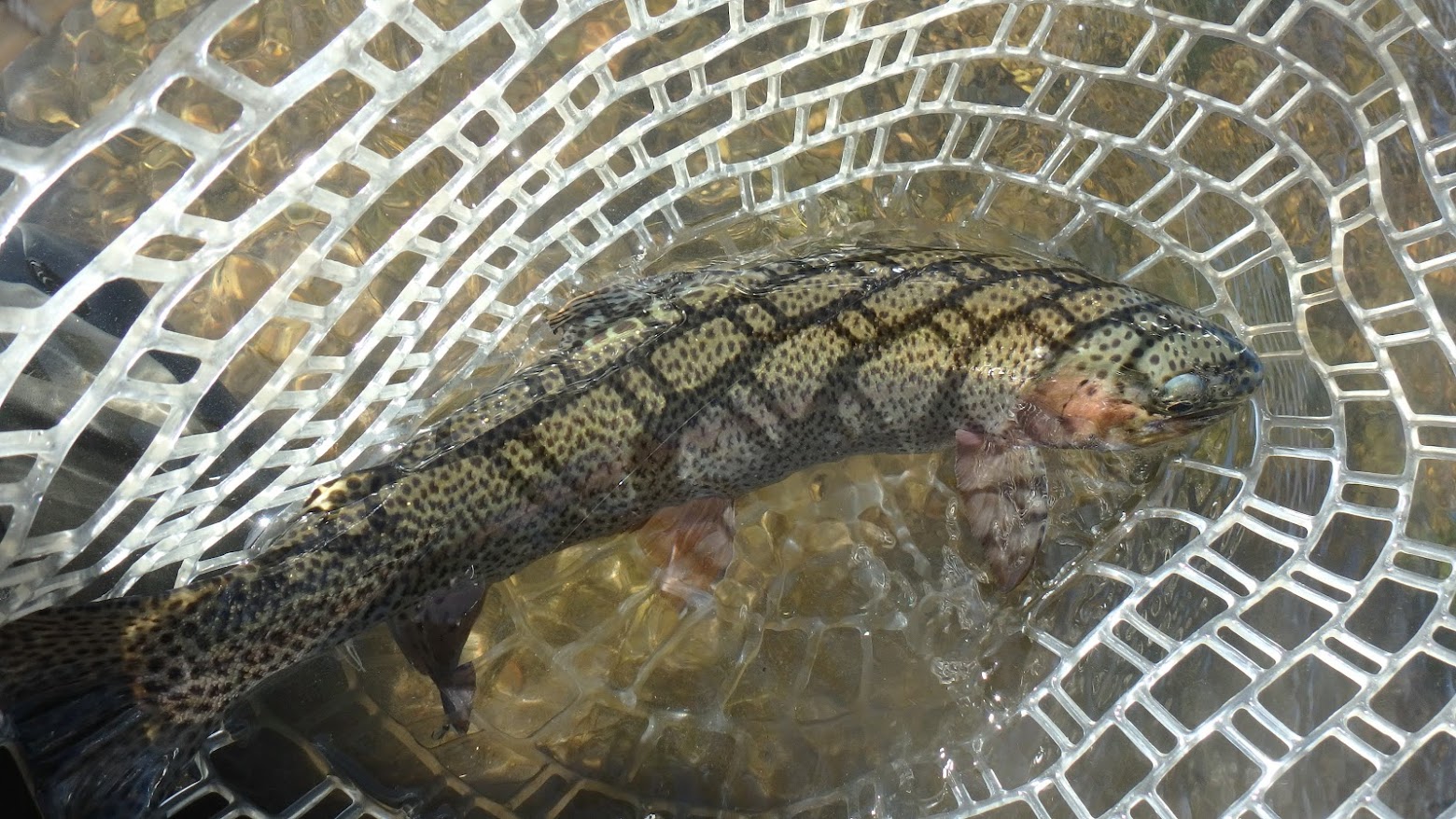 In a state of renewed frustration I retreated to the weir area. I speculated that the dry/dropper approach might be more appropriate for the deep seams and channels at the top of the riffles, and I began to lob casts to the frothy water created by the small dam. On the eighth drift the beetle sank, and I raised my rod tip and found myself attached to a very respectable fourteen inch rainbow trout. We battled back and forth, before I gained the upper hand and slid the sleek ‘bow into my net. A skunking was averted, and I was quite pleased with my dry/dropper change over.

After another five minutes of probing the fast water I decided to check out the water on the downstream side of the bridge. This was the section that Steve and I fished relatively successfully on September 25. As I stood on the bridge, I discovered a young bearded fisherman flicking long casts with a spinning rod. Steve remained above the bridge, and I did not want to infringe on the young man’s domain, so I waited for ten minutes and rested with my back to the wind. 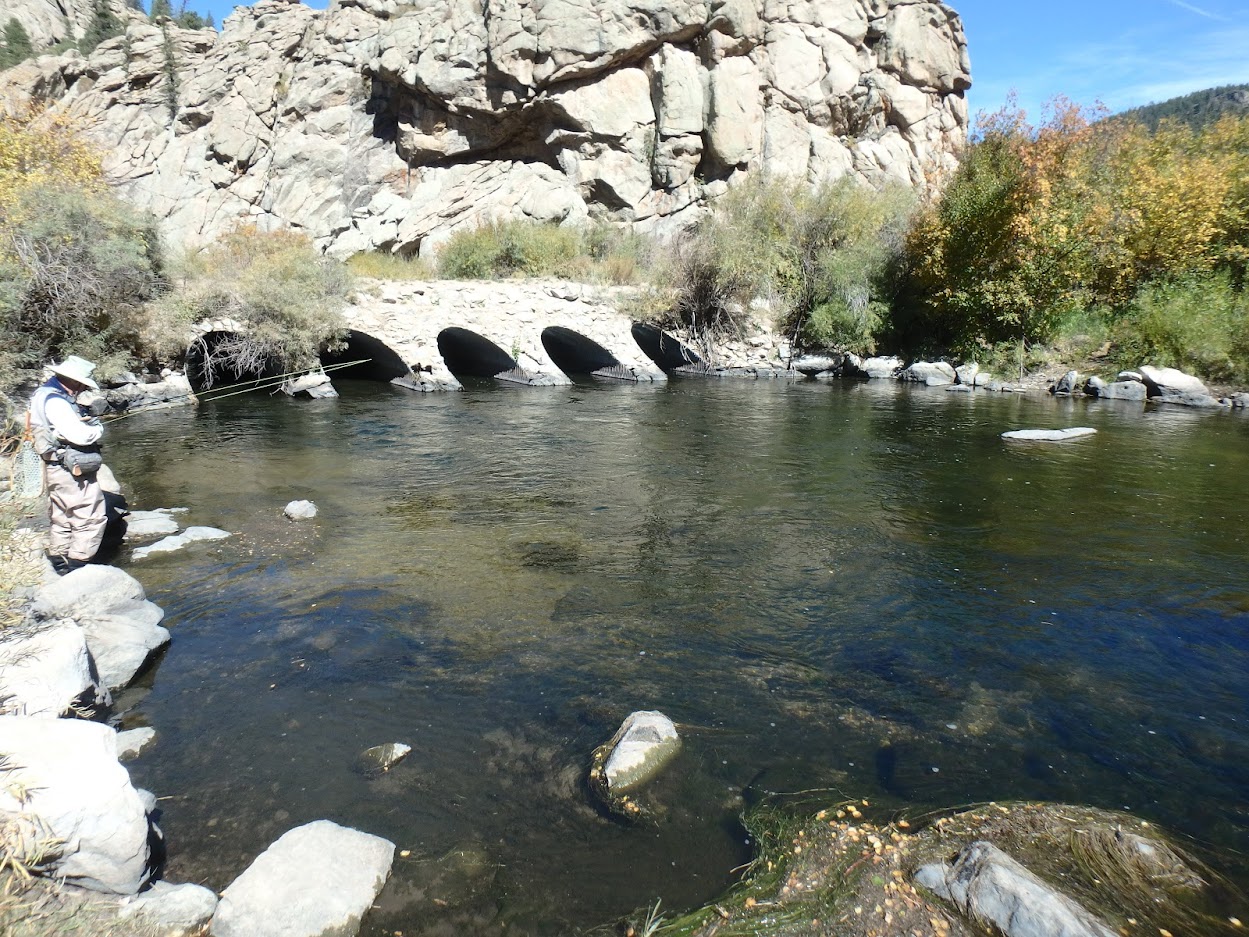 Our Space After Lunch

Eventually the downstream angler migrated away from the bridge far enough, that I felt I could claim the upper right corner. I hunched down and parted the willows and gained a position twenty yards below the bridge next to a large flat exposed rock, and I began to toss the beetle and nymph combo to the nice runs above me. Once again the beetle exacted a couple looks and refusals, and a very subtle pause may have indicated a very brief connection with one of the nymphs, but the bottom line results were disappointing.

At approximately twelve o’clock I noticed increased surface activity, as quite a few trout went into a steady feeding rhythm. I saw little evidence of food on the surface of the water, but I was able to observe a few small blue winged olives, so I resurrected the size 24 CDC BWO. Surely this fly would reverse my fortunes and yield some action on the South Platte River. I am sad to report that the finicky fish of the popular tailwater were immune to all my best efforts to fool them. I cycled through several CDC olives, a Klinkhammer emerger, a Craven soft hackle emerger that was fished as a dry fly, an ant, a hippie stomper, and a midge emerger. The net result of my efforts after lunch was intense casting practice and extensive arm exercise. Knot tying was another element of the skill development session. 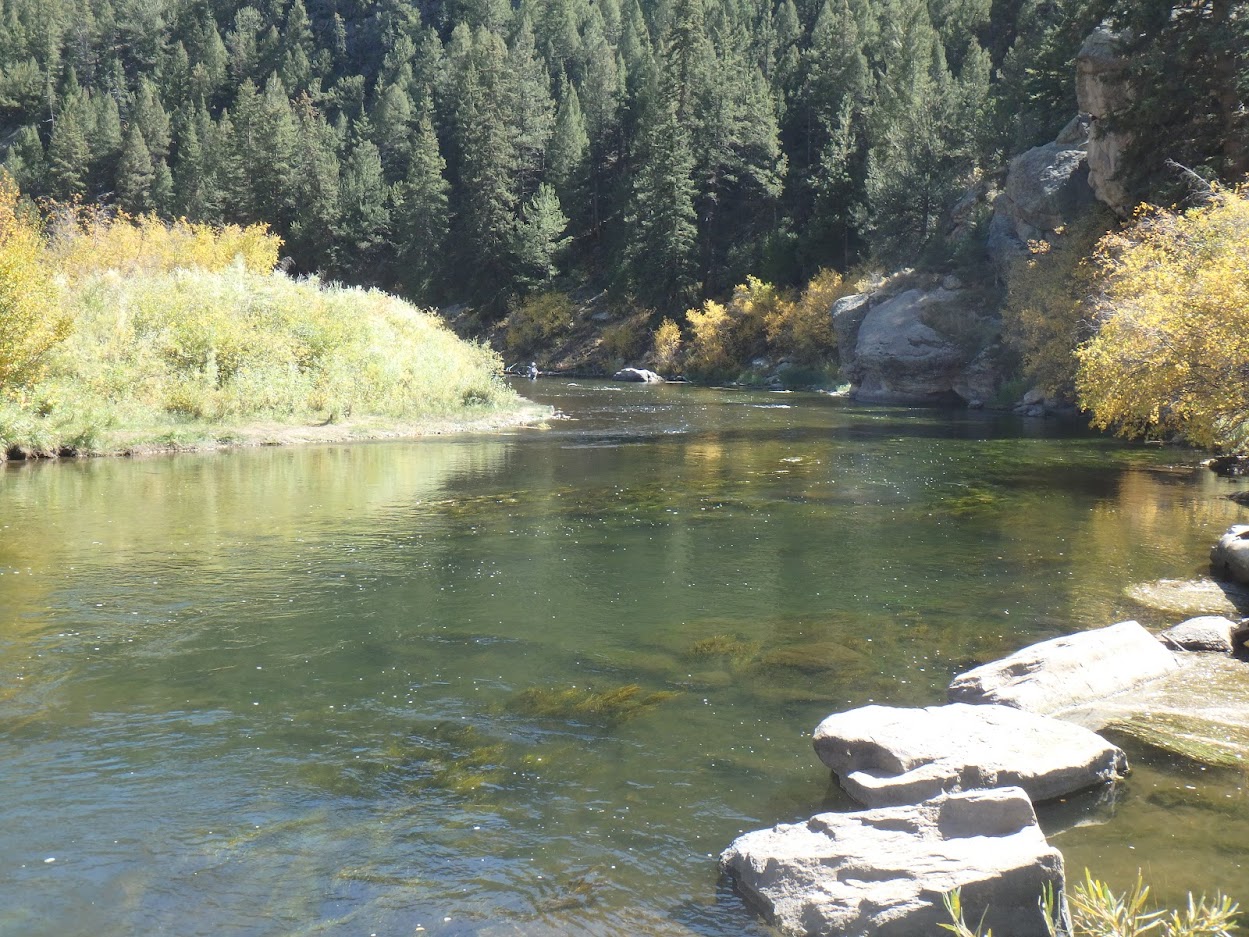 Steve was greeted with similar results. In a last ditch effort to rebuild my confidence I reverted to one of my mainstay approaches. I tied a tan pool toy hopper to my line along with a beadhead hares ear nymph and soft hackle emerger, and I flicked repeated casts to the seams and narrow channels that parted the aquatic vegetation. Surely an opportunistic trout would snatch one of the dead drifting morsels for an easy meal. Alas, my thinking was off base, and none of my changes of approaches or flies could tempt the South Platte River trout on September 25.

By 3PM Steve and I were bored, and our confidence reached new depths, so we agreed to surrender to the wind and adverse conditions. Sourdough specials and a Red Bull occupied my thoughts, and I was anxious to forget the humiliation handed to me by the Eleven Mile Canyon coldwater trout.