My last eight outings consisted of trips to high elevation headwater streams, and I landed a few trout in the fifteen inch range, but I hungered for the opportunity to tangle with some larger fish, as the night temperatures of late September heralded the onset of autumn. I checked the flows on the South Platte River in Eleven Mile Canyon, and I was pleased to learn that the popular tailwater was tumbling through the canyon at 77 CFS. During a trip on September 6, 2018 my friend, Steve, and I encountered a spectacular trico hatch, but our attempts to land trout on the minuscule mayfly spinners was largely stifled. I concluded that my size 22 imitations were too large, so I devoted several tying sessions to producing new size 24 patterns, and I yearned for a return engagement with the Eleven Mile residents. I contacted Steve, and he agreed to accompany me on Wednesday, September 25.

I arrived at Steve’s house in Lone Tree by 7AM, and after transferring his gear, we departed and arrived near the dam in Eleven Mile Canyon by 9:15AM. We were a bit surprised by the number of fishermen that occupied prime parking spaces in the special regulation area, and we were forced to park at a picnic area downstream from the first bridge below the dam. The dashboard thermometer displayed a crisp 44 degrees, and this prompted me to dig out my light down coat from the bottom of my Fishpond fishing bag. I rigged my Sage four weight, and Steve selected his Orvis Helios five weight, and we ambled up the road to the bridge in search of a vacant spot to begin our day of fly fishing. 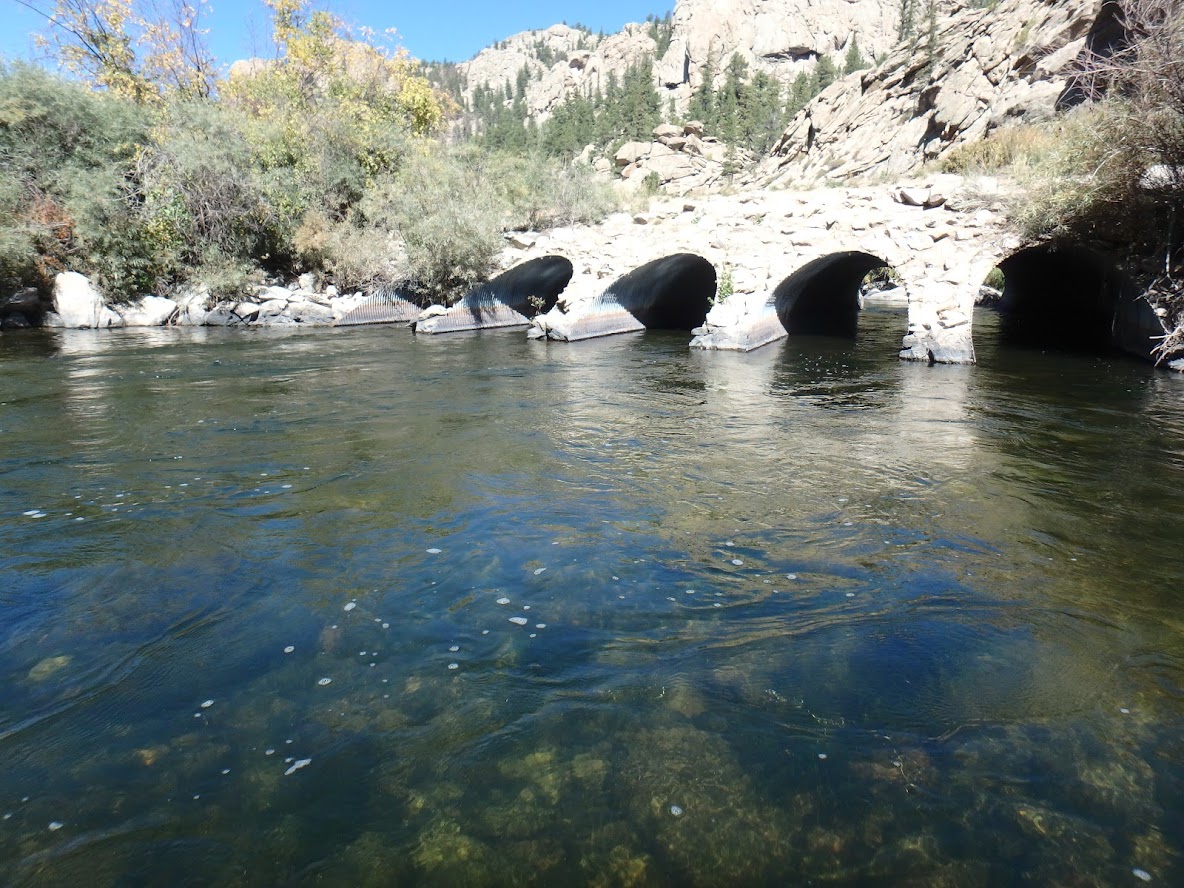 During past visits we favored the section upstream from the bridge to a sharp bend in the river, but two anglers occupied this territory, and when we hiked through the willows to investigate the section around the bend, we met two additional fishermen. This short scouting trip forced us to retreat, and we were about to cut across the brush to a position downstream, when the two anglers below the bridge invited us to jump into thirty yards of vacant water below the culverts. Steve and I thanked them for their kindness, and I carefully made my way to the right bank facing upstream and Steve occupied the left.

The young men below us suggested that fish were rising below the bridge, but I surveyed the area for a few minutes and saw one sporadic rise. I considered my options and settled on a peacock hippie stomper and a size 22 RS2, and I began to spray casts upstream, across and down. Two trout rose to inspect the hippie stomper, but they immediately dropped back to their holding positions near the stream bottom. Steve informed me that he spotted occasional trico spinners, so I extracted a sunken trico and positioned it below the RS2, but the three fly arrangement was as ineffective as the two fly approach. Finally after twenty minutes of futility, I concluded that the dry/dropper method was not popular on Wednesday, September 25. 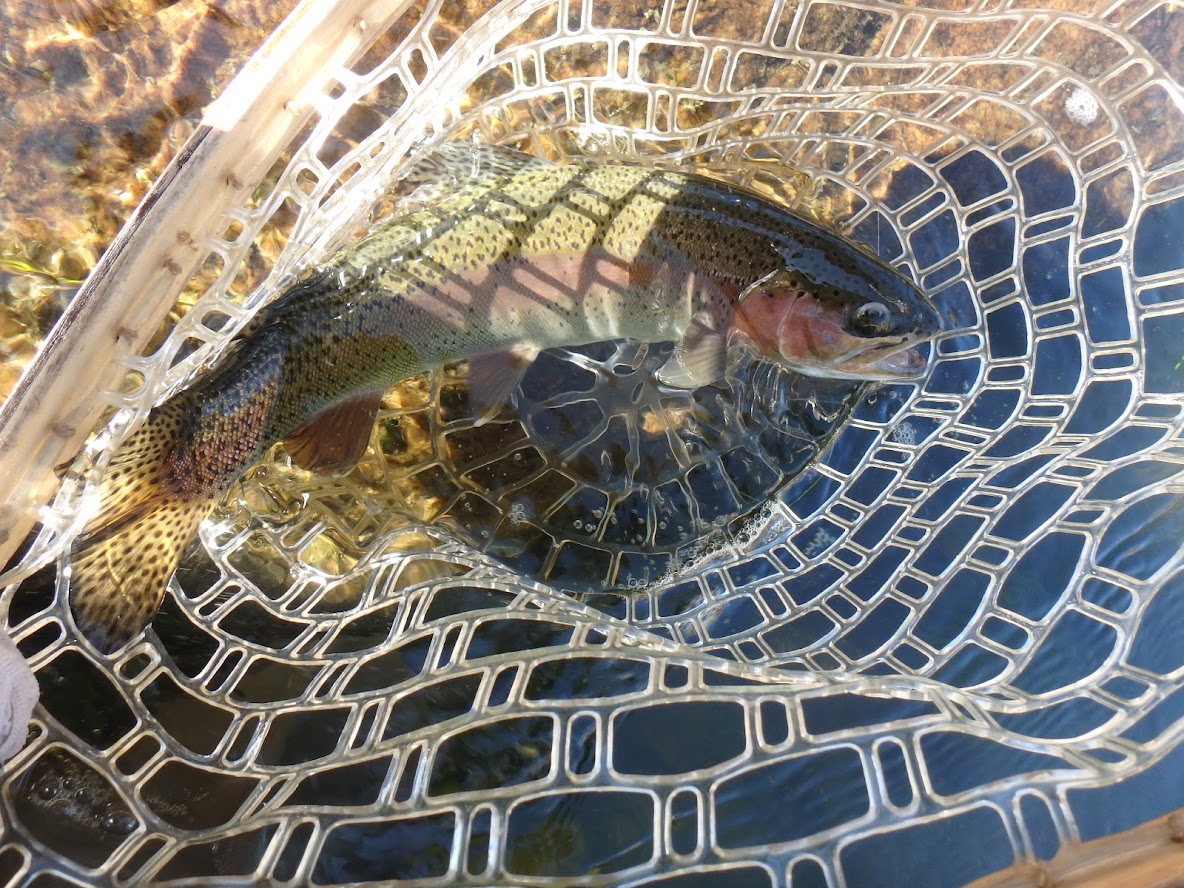 I stripped in my flies and removed them and resorted to a size 24 CDC BWO. Blue winged olives were not present, but I surmised that the tiny mayfly would do double duty as a trico dun imitation. The theory proved somewhat accurate, when I landed a small eight inch rainbow and then a gorgeous rainbow trout that confidently sipped the dun imitation on a downstream drift through the center of the pool. Just as I was feeling new confidence with the CDC olive, the feeding pattern shifted to spinners. The number of rising fish increased, and I continued with the olive for another fifteen minutes with no response, before I paused to consider my options. 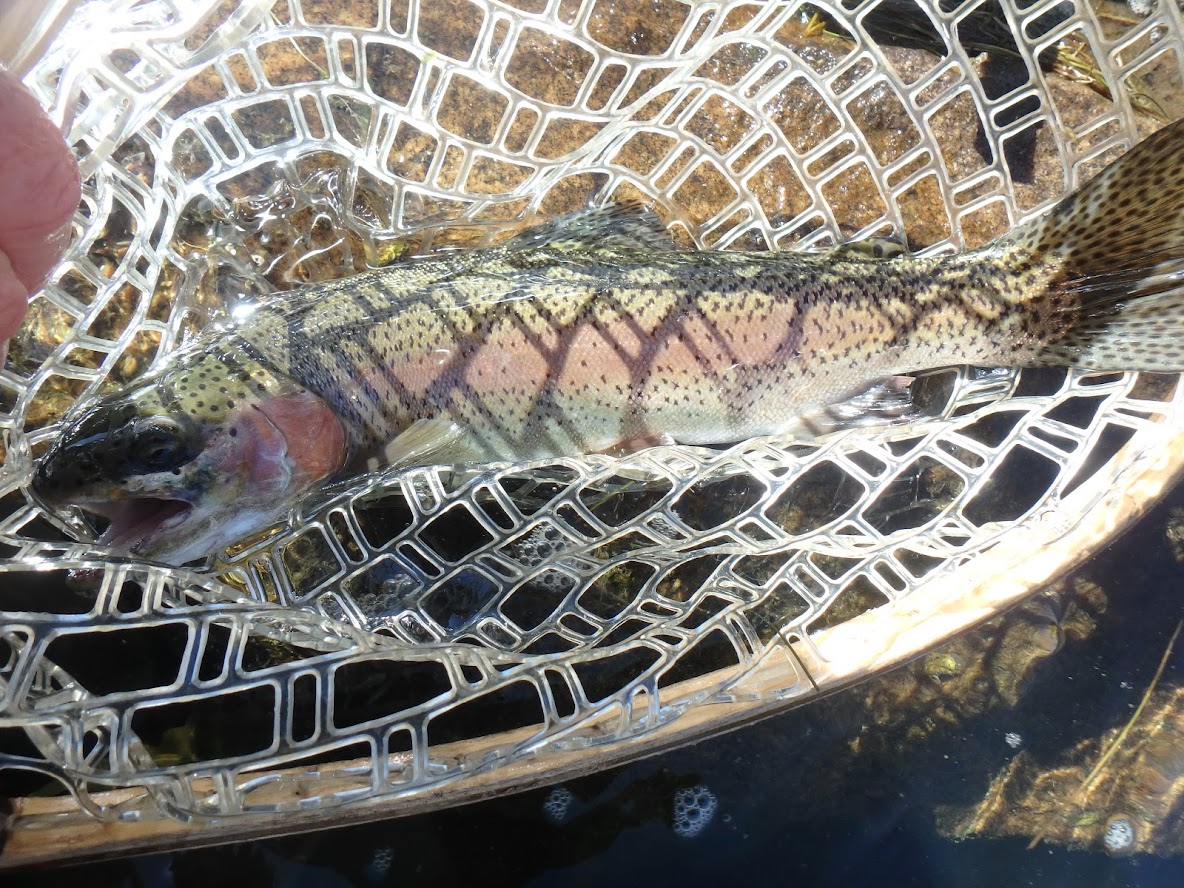 I was unable to see spent spinners on the surface of the river, but by 10:30AM small sparse mating swarms of tiny mayflies began to form over the riffles, and Steve insisted that he noticed the presence of spinners in the film. I conceded to the obvious and dug out one of the CDC trico spinners, that I tied over the winter. The fly was extremely simple with a pair of split microfibbet tails, a black thread abdomen and thorax, and a tuft of CDC tied in at the thorax in a spent wing position. I began spraying casts to the various sites of rising fish, and after an enormous number of drifts, a very fine fourteen inch cutbow sipped the fake spinner. The miniscule fly pierced the corner of the cutbow’s mouth, and I struggled to remove it while keeping the precious trout in the water. After several attempts, the line broke at the eye of the hook, and the teeny trico remained in the hard lip of the fish. Every time I gripped the strong river resident, it squirmed and splashed and showered me with water droplets, but eventually I utilized my hemostats to grip the fly and plucked it free. I was pleased to recover my productive trico spinner, and I allowed the cutbow to return to its watery home. 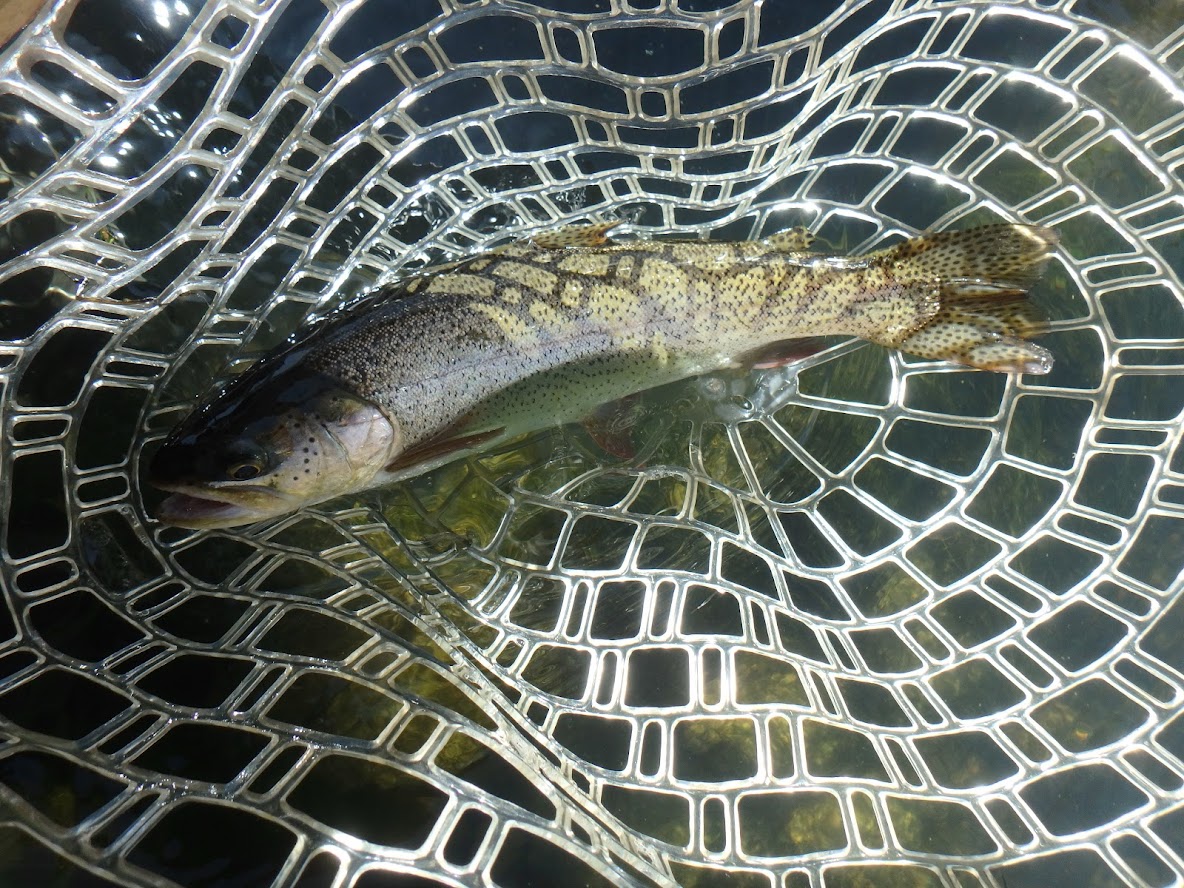 I was certain that the new CDC trico would be a hit with the South Platte trout, but as the intensity of the spinner fall increased, the CDC fraud was ignored. The process of removing the fly from the cutbow soaked the CDC wings, and I was unable to dry them to a fluffy state, and consequently I struggled to track the spinner especially in the swirling currents, where the deep runs curled into smooth water to my left. Continuing to do the same thing and expecting different results is the definition of insanity, so I swapped the saturated trico spinner for a fresh version. The wing on the second model was slightly more dense than the first, and apparently this was a turn off for the trout in my vicinity. By noon the fish count plateaued at three, and the trout displayed their gluttony on the dense supply of naturals that blanketed the river. What was a frustrated fly fisherman to do? 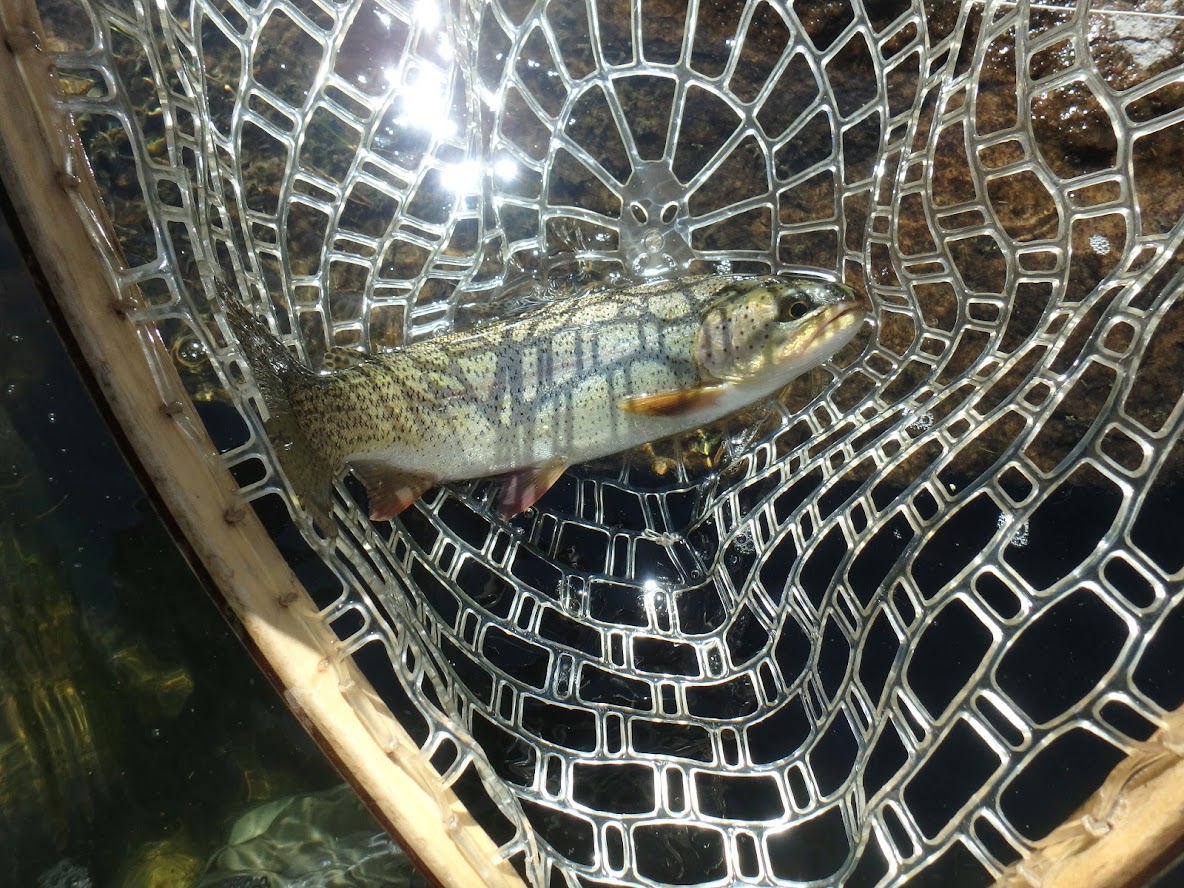 I decided to deploy a contrarian strategy and knotted a size 18 black parachute ant to my line. The frequency of rises declined during a lull in the hatch, and the wind kicked up a bit, so I flicked the ant to some feeding lanes above me. In the next twenty minutes two muscular thirteen inch rainbows streaked from two feet away to inhale the ant. Needless to say this was a pleasant surprise, and my confidence surged, as I photographed and released the two ant eaters. 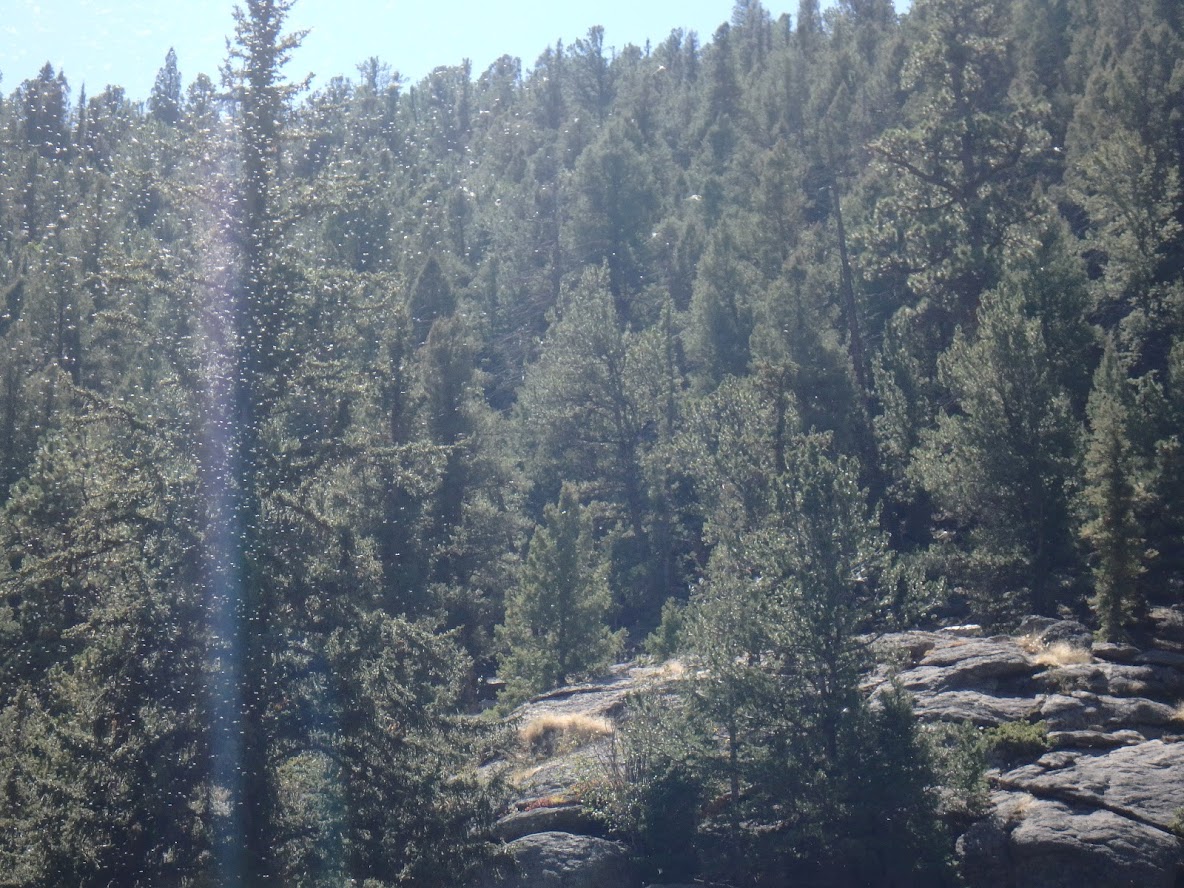 Thick Cloud of Tricos on the Left

Alas, the tenure of the ant feeding fad was brief, and I sprayed casts around the area to other likely feeders with no response. Another wave of rapid fire feeding ensued, and I returned to the original albeit somewhat mangled trico spinner. The workhorse fly once again proved its worth, as I landed three additional trout before we broke for lunch at 1PM. All three fish were respectable rainbows, and a fourteen inch fighter leaped three feet above the surface of the river in an attempt to gain its freedom prematurely. In addition to the three netted ‘bows, I temporarily hooked up with two other battlers, but they shed the hook before I could gain control. 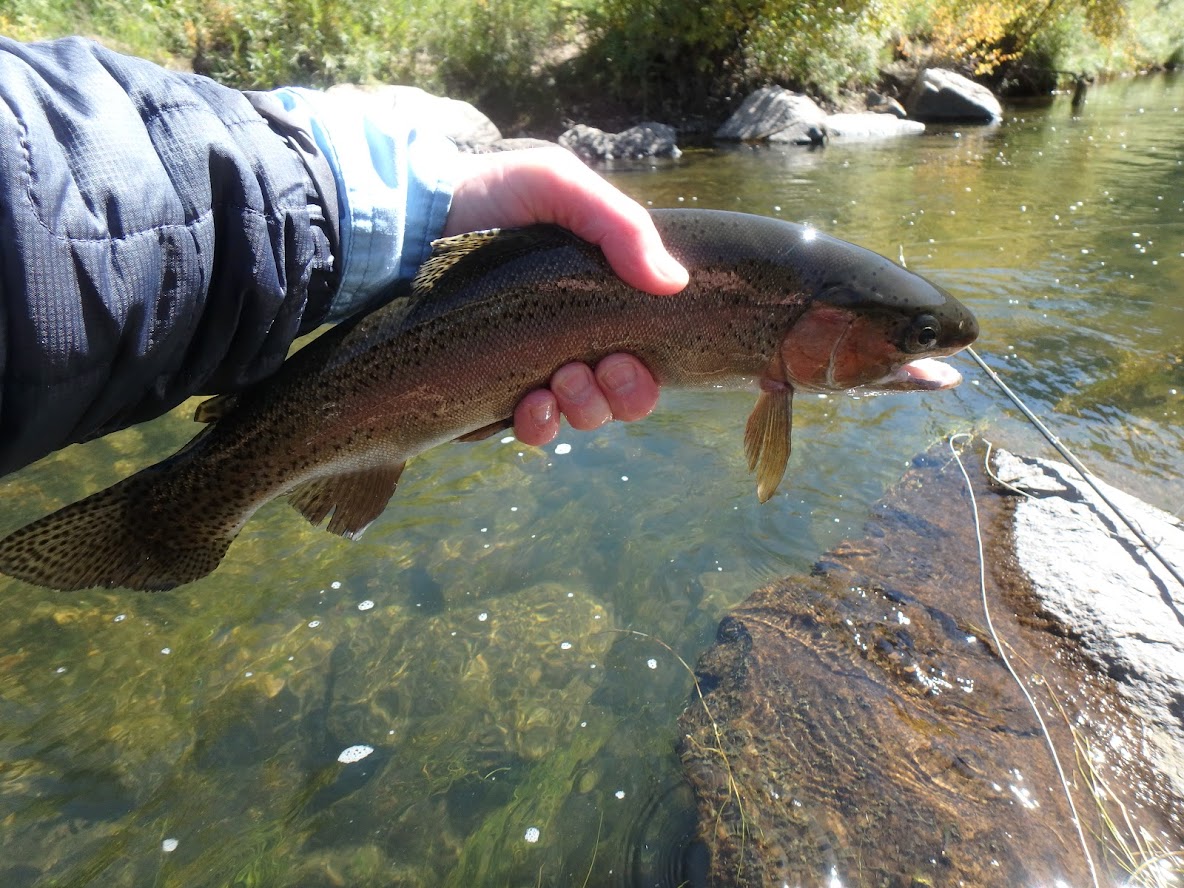 After lunch Steve returned to the same area fished during the morning, while I waded along the left bank just above the earthen bridge. Within minutes of resuming my quest for fish, a brief flurry of feeding commenced in the center of the pool. I tempted one trout to refuse the trico twice, but otherwise the morsel was ignored. Toward the end of this brief bit of action I observed a couple small blue winged olives, so I quickly replaced the trico with a size 24 CDC olive. Unfortunately as I began to lob the olive into the area, the feeding party ended, and my casts were fruitless. 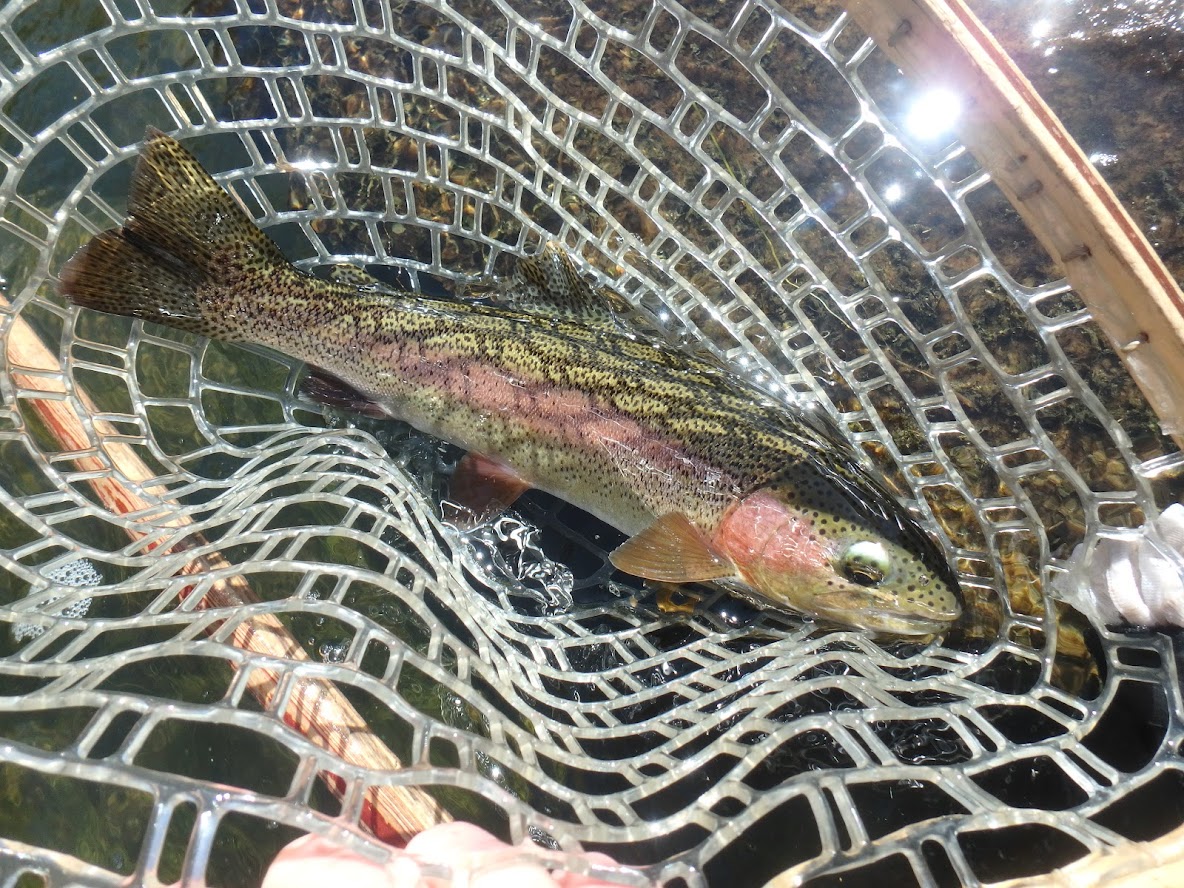 Since a breeze continued to whistle down the river, I once again switched to the parachute ant, but the terrestrial failed to have an impact. The top of the pool presented a shallow riffle, so I transformed my line into a dry/dropper rig with the peacock hippie stomper on top followed by a beadhead pheasant tail and RS2. I ran the nymphs through the riffles and feeding lanes at the top of the pool, but the ploy was ignored. My confidence sank, but I circled back to the downstream side of the bridge to Steve’s position, and I prospected the faster channels and seams just below the culverts with the three fly set up, but again the fish were wise to my ruse and ignored my flies. At 2:50PM I created a nasty tangle with the three flies that ultimately resulted in an annoying wind knot, so I clipped them off, and Steve and I returned to the car and called it a day. 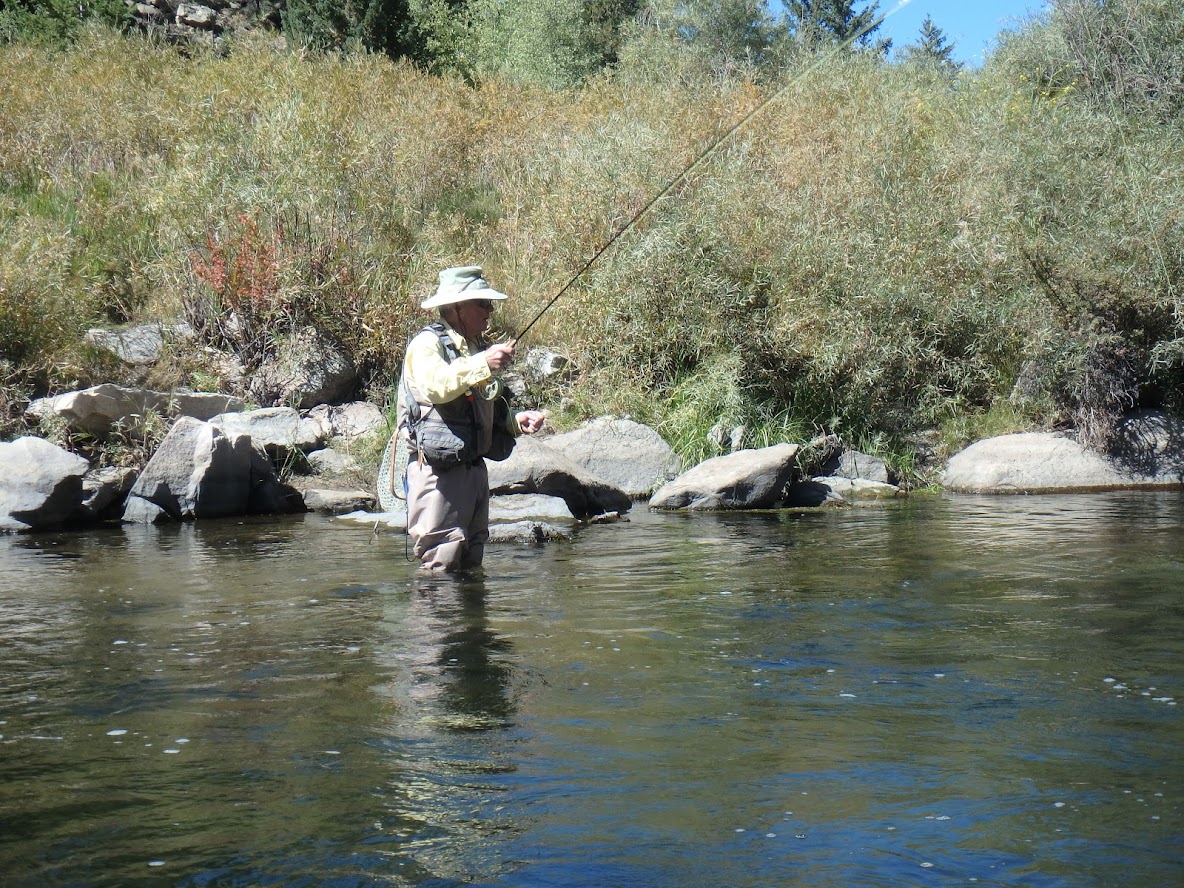 Eight trout may not seem like a highlight, but it surpassed the two fish day that resulted from our September 6, 2018 visit. Including long distance releases, I had the opportunity to enjoy a double digit day, so I was pleased with my results. My fly was competing with thousands of naturals, so a low catch rate was not totally unexpected. The size of the fish was excellent, as all except the first were in the thirteen to fifteen inch range. My new CDC trico duped four trout, and it was gratifying to create an effective pattern. All eight trout sipped a dry fly, and seeing the surface take is always my preferred method of fooling fish.