I dipped my toes, actually my wading boots, in the water at 10AM on Friday, June 14. The river that I entered was the South Platte River below Eleven Mile Reservoir, and the flows were around 140 CFS, and the clarity was off colored. The pools exhibited a dense olive murkiness; however, more visibility was evident in the faster sections. This fact gave me hope that Friday could be a decent day. The air temperature was around sixty degrees, as I embarked on another fishing adventure.

Although the flows were higher, than what I was accustomed to on this section of the South Platte, I decided to persist with my tried and true dry/dropper approach. A deep nymphing rig may have been more appropriate, but the South Platte contains an ample amount of aquatic weeds and moss, and constantly picking scum from my flies is not my idea of fun. Even with the dry/dropper technique I performed this ritual more than I cared to. 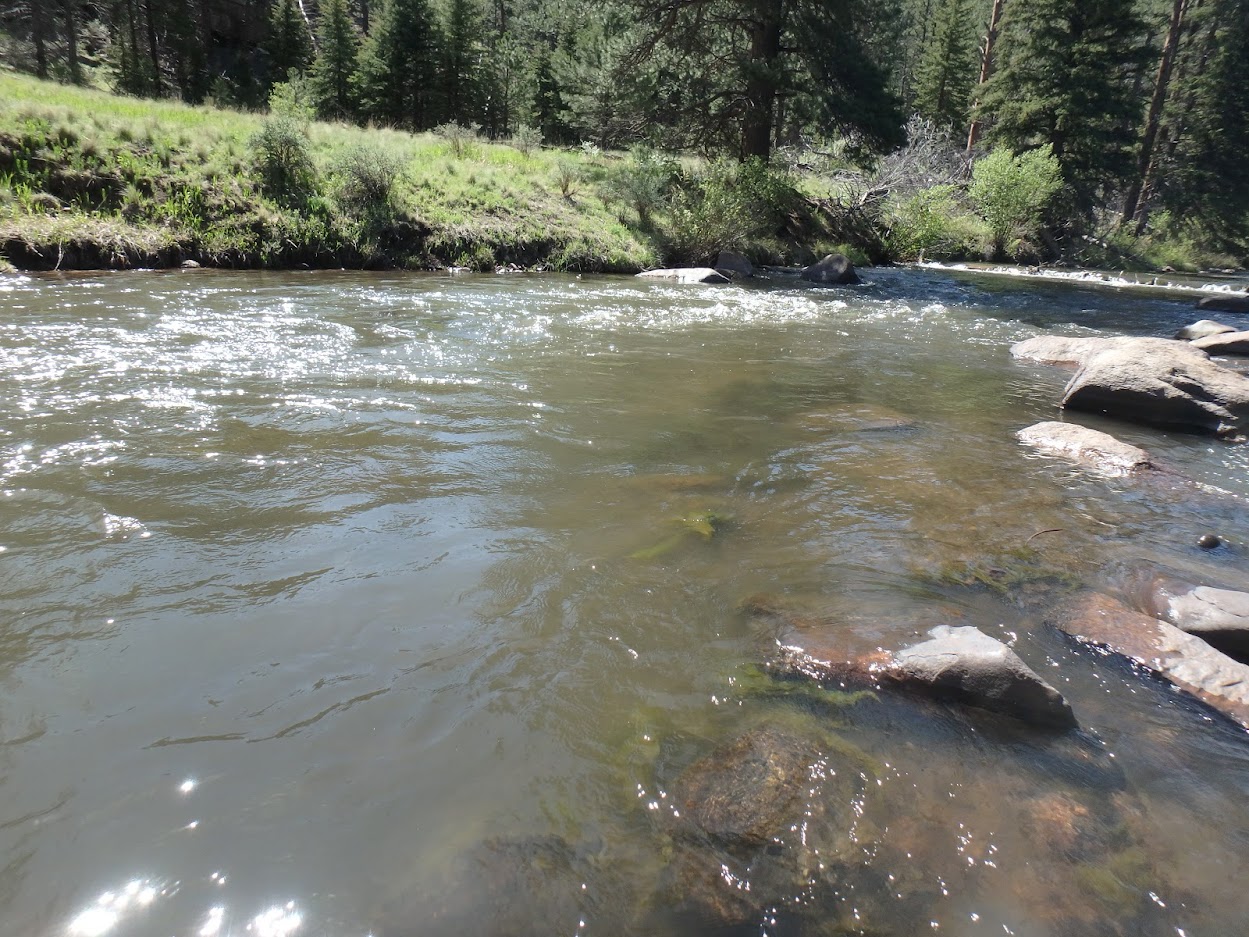 My choice of flies was not very creative. I varied my large foam top fly from a fat Albert to a tan pool toy, but the subsurface offerings were a beadhead hares ear nymph and a salvation nymph. I persevered with these flies through the first hour, and landed two medium size trout on the salvation, but I was very disappointed with my success rate. I began to doubt my stream choice, and my thoughts turned to lake options. I was convinced that the elevating flows and off colored conditions were impacting my fishing success. 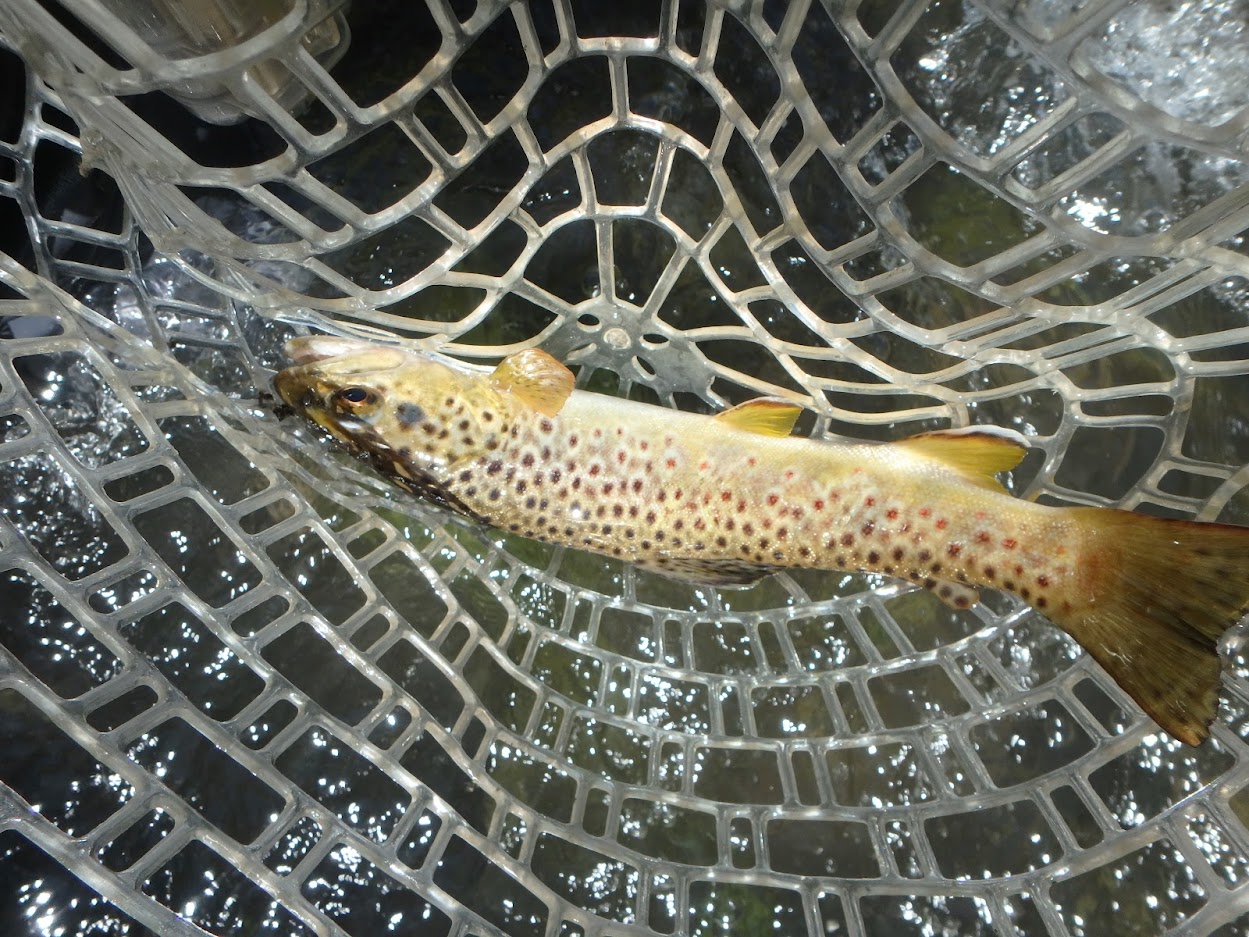 By eleven o’clock I began to experiment with different fly options. The elevated releases from the dam were kicking up significant quantities of aquatic debris, and on one occasion while picking it off my fly, I discovered an olive scud. Why did I not think of this earlier? Surely massive quantities of scuds were being dislodged, and the trout were chowing down on this windfall. I replaced the salvation nymph (the only fly that produced so far) with an orange scud. Why orange? I had an abundant quantity of orange in my fleece wallet, but only a couple gray and olive. The scud did account for one trout after a lengthy trial period, but it was not the answer to my slow catch rate, that I hypothesized it would be. 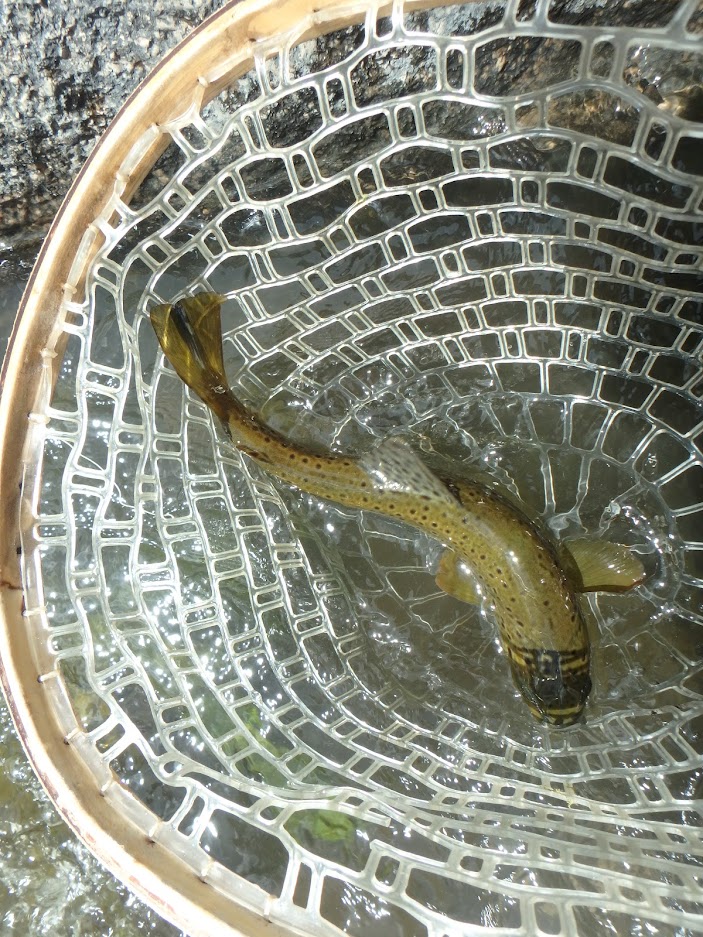 During a brief effort on Thursday night I noted quite a few caddis buzzing about. Perhaps a go2 sparkle pupa with a bright green body would be more to the trout’s liking. It worked quite well on a May trip to Eleven Mile, so perhaps it could jump start my day on Friday. I removed the scud and replaced it with a bright green go2 pupa. This move seemed to be the catalyst to improved results. 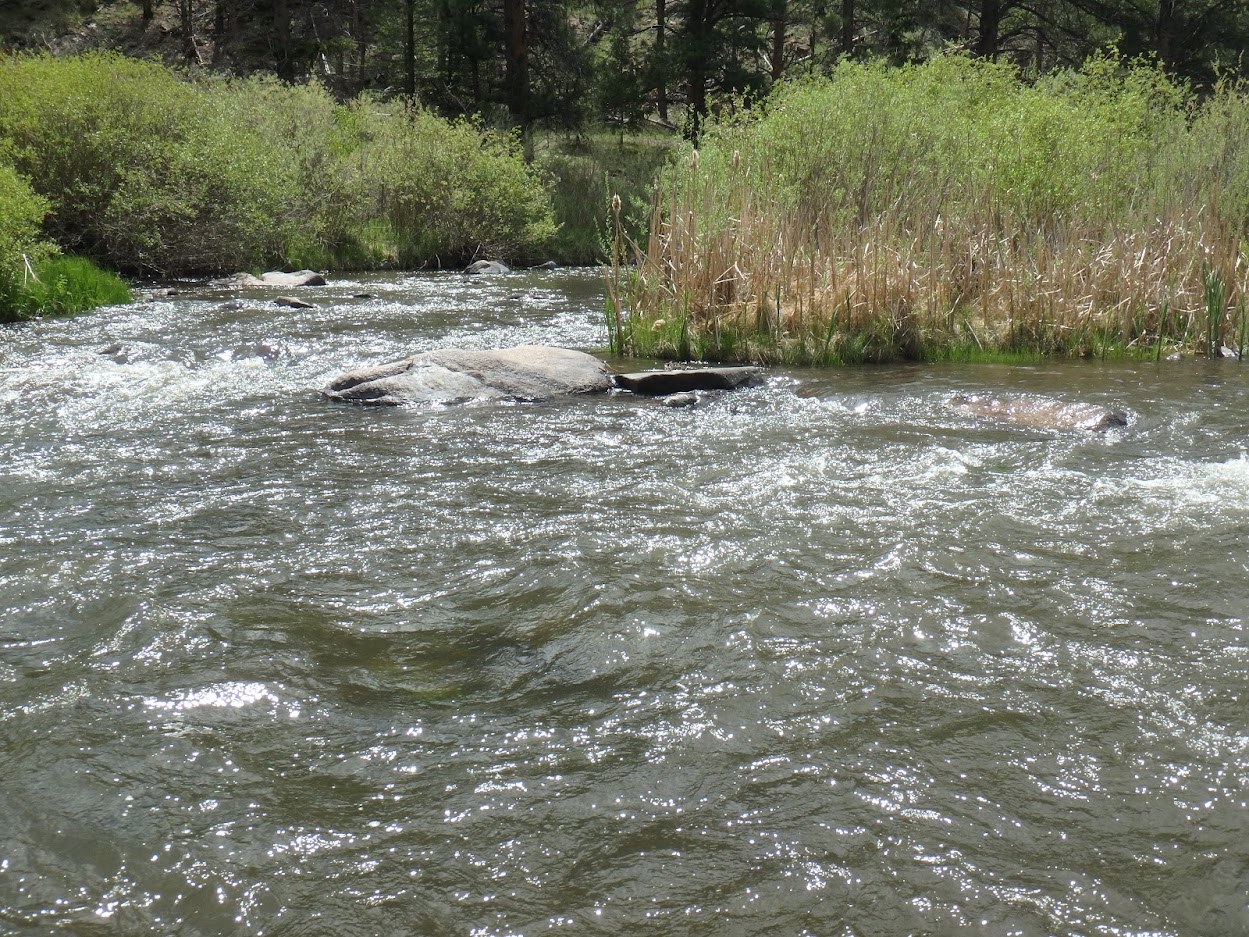 The fish count steadily moved to eight, as I arrived at the downstream tip of a very long narrow island, and all the landed fish snatched the cadds pupa, particularly at the end of the drift or on a swing away from the bank. I chose to explore the smaller left braid around the island first, but my plan was to circle back and progress up the right side later, if the quality of fishing merited such a move. 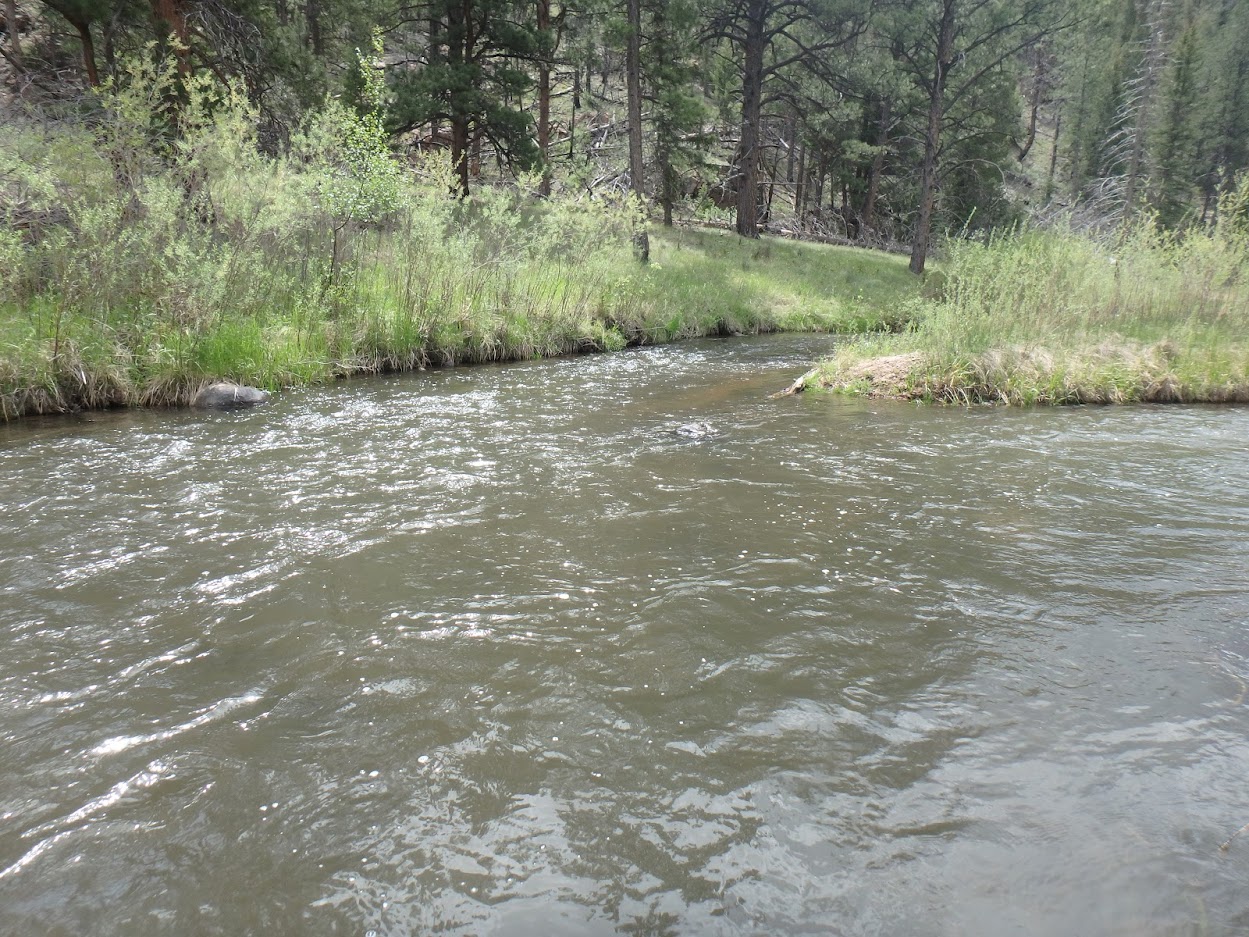 At the very bottom of the left channel I flipped a cast to a slack water V just above the merger of two currents, and I was astonished, when a thirteen inch brown crushed the pool toy. This brown trout was deeply colored with deep yellow and orange sides, and I was very excited to snap some photos. 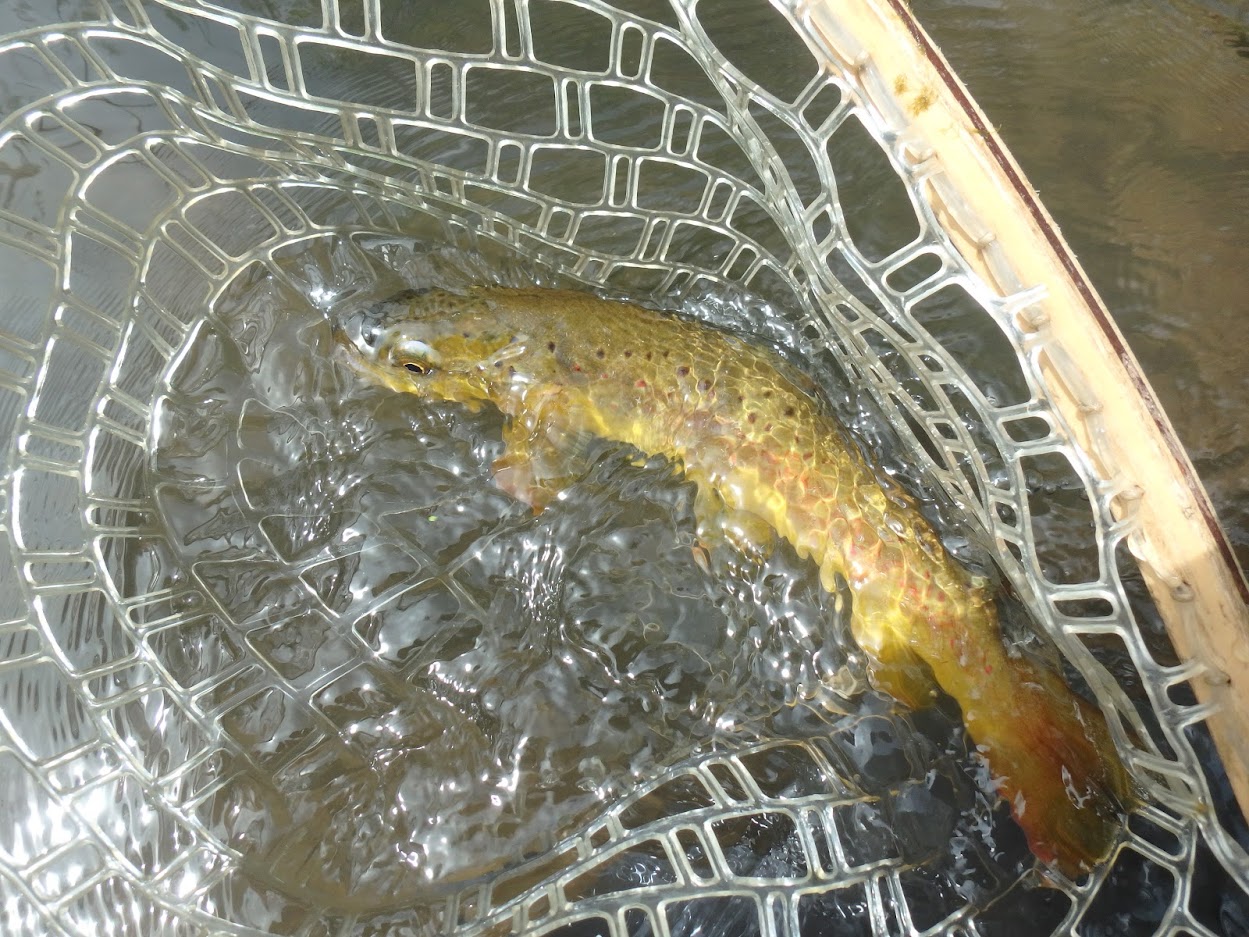 Amazing Color on This Brown Trout

Upon the release of this highlight catch, I progressed along the left branch of the river to the tip of the island. Along the way I paused for lunch, and the fish count rested at thirteen. As I sat on a grassy beach by the river, some dark clouds rolled in, and a few drops of rain spurred me to withdraw my raincoat from the backpack. I performed this act in haste, and it was a prudent move, as a very brief shower ensued.

After I reached to tip of the island, I climbed the east bank and hiked back through some trees and bushes, until I returned to the downstream end. For the remainder of the day I progressed upstream along the right braid, and then I continued for a decent distance through the full combined flow of the river. During this time I raised the fish count from thirteen at lunch to twenty-eight by the end of the day. 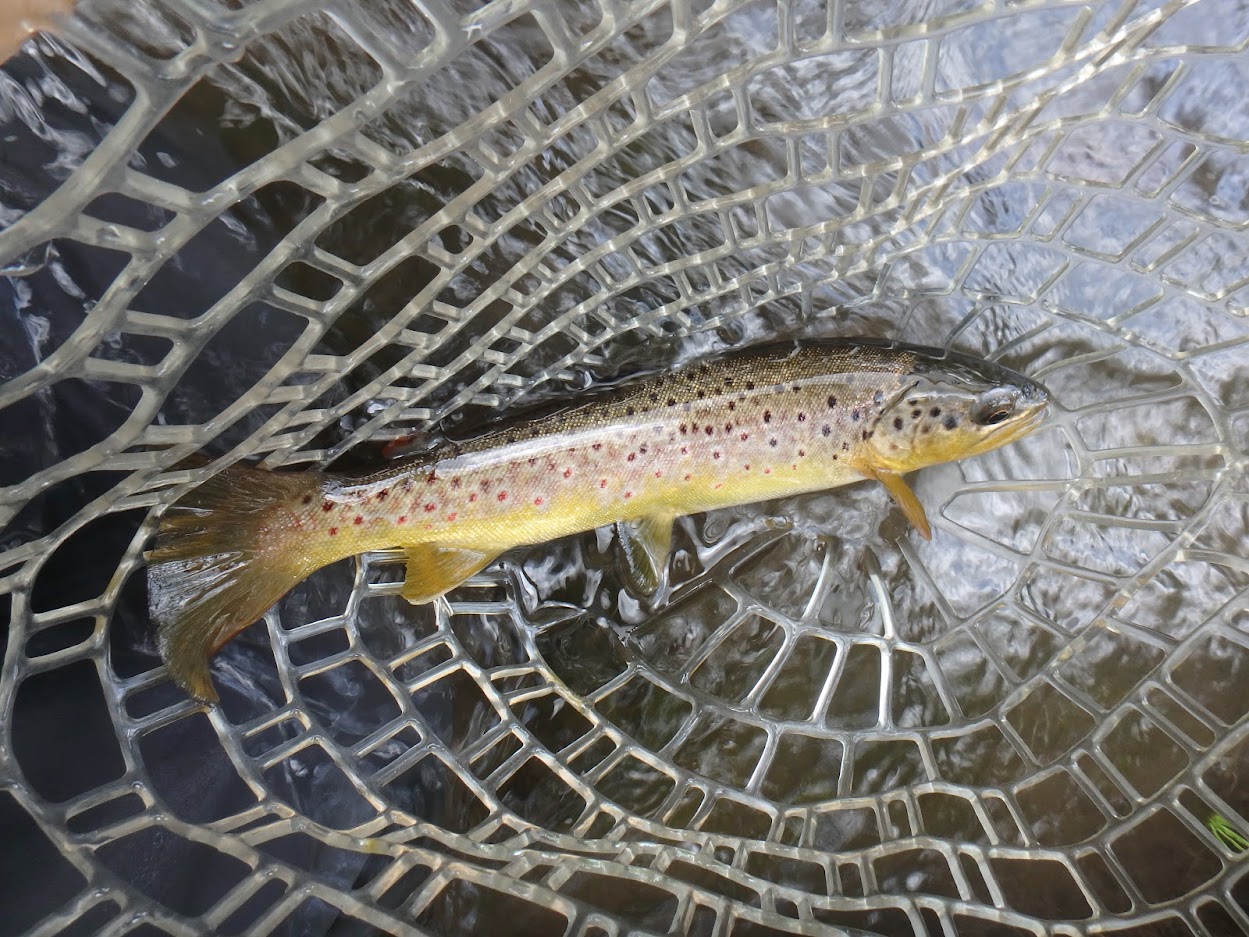 Between 1PM and 3PM the fly fishing transformed from excellent to exceptional. During this time I noticed a sparse number of size 16 mayflies in addition to the ever present caddis. The fishing gods must have been looking out for me, as I made a cast and noticed that only the pool toy remained on my line. Before I threw my usual tantrum for stupid moves, I decided to scan the willows along the bank behind me, and I was pleasantly shocked to see the g02 caddis dangling from a branch. I eagerly retrieved the two snapped off flies, and at this point I decided to make a small alteration to my fly lineup. The hares ear was simply providing extra weight, and it rarely resulted in a landed fish, so I tied a salvation nymph to the top nymph position and then retained the go2 sparkle pupa on the end. Typical for the Day

What a prescient move this turned out to be! I suspect the size 16 mayflies were early pale morning duns, and the salvation has historically proven to be an effective imitation of the PMD nymph. The fish certainly found the dark reddish brown nymph to be a tasty treat. The go2 caddis occasionally fooled a coldwater finned eater, but suddenly the salvation was the favored delectable morsel. After I landed three in succession, I switched the position of the two flies and lengthened the leader a bit. The move was timely, as the trout began to crush the salvation at a torrid rate. There was a period, when it seemed I hooked and landed a fish on nearly every cast. I even landed a very nice brown that grabbed the salvation, as it dangled behind me, while I waded upstream to a new position. Another indicator of hot action was the almost instantaneous grab of the nymph, as it entered the water. This phenomenon never ceases to amaze me.

By three o’clock the action slowed significantly, and I was not certain whether this signified the end of the nymphal activity or whether it was attributable to the type of water I encountered. The two braids around the island contained lots of pockets and deep runs; whereas, the full river could be described as more of a riffle and pool structure. 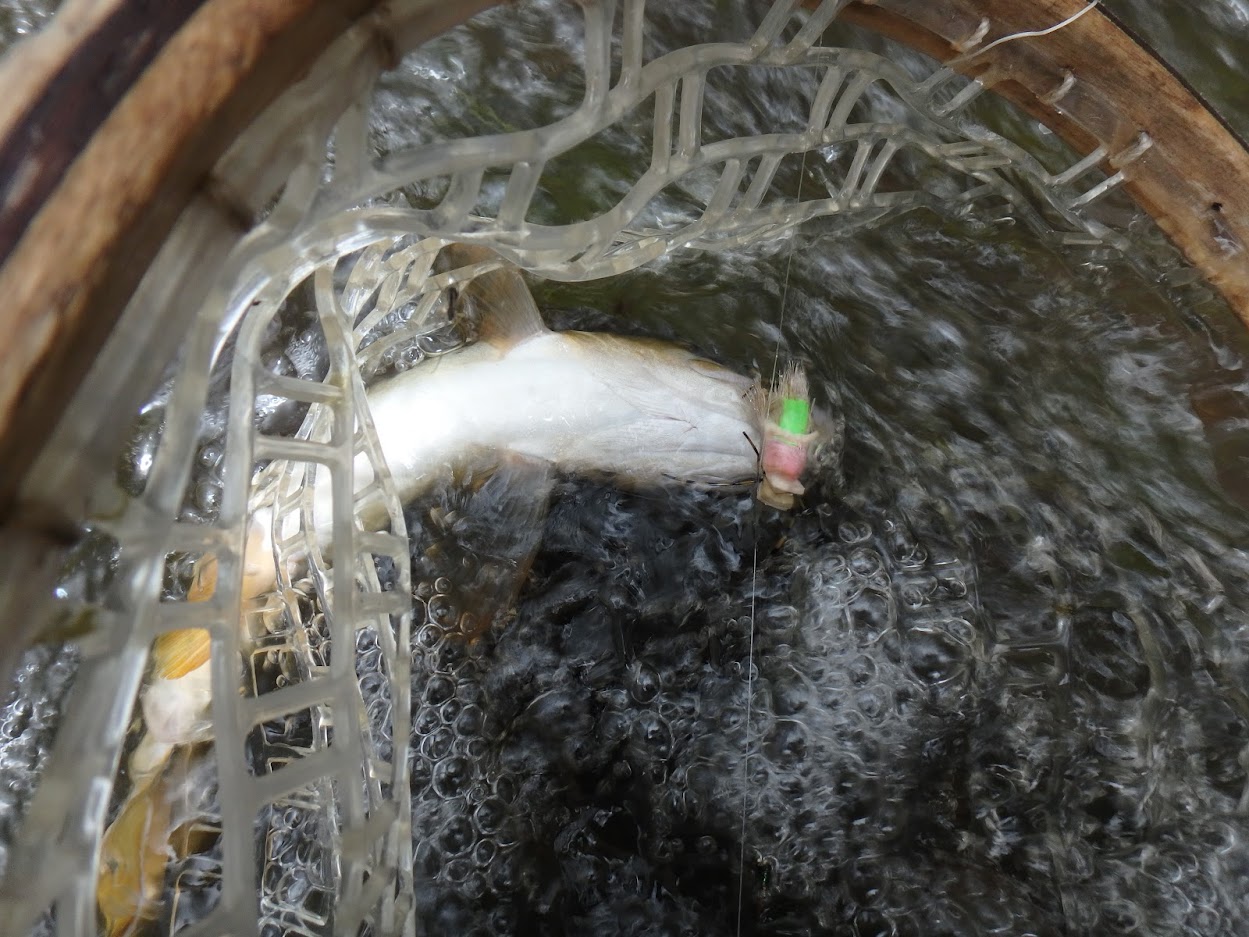 The slowing action was an excuse to call it a day, so I could depart early and make the Friday afternoon drive back to Denver in time for dinner with Jane. Once again the South Platte River delivered an exceptional day for this fisherman. A few of the trout extended to thirteen inches, but twelve inches was the norm. Only two were rainbows, but the brown trout were in excellent condition with bright coloring and vivid spots. Hot action such as that enjoyed during the early afternoon is a rarity, and I was very thankful for the opportunity. I was about to write off the day to experience at noon, so persistence and confidence in my methods paid huge dividends.