The story line on Thursday, May 16 paralleled that of Tuesday, May 14 on the Arkansas River, as persistence proved to be a significant contributor to success. Warmer temperatures accelerated snow melt, and this reduced the number of freestone options in Colorado. I was forced to narrow my choice of fishing destinations to tailwaters, and the South Platte River in Eleven Mile Canyon was an obvious choice. The flows held at a steady 93 CFS, and the meteorologists projected a high of 69 degrees with clouds all day in Lake George. I signed up for another trip to Eleven Mile Canyon. 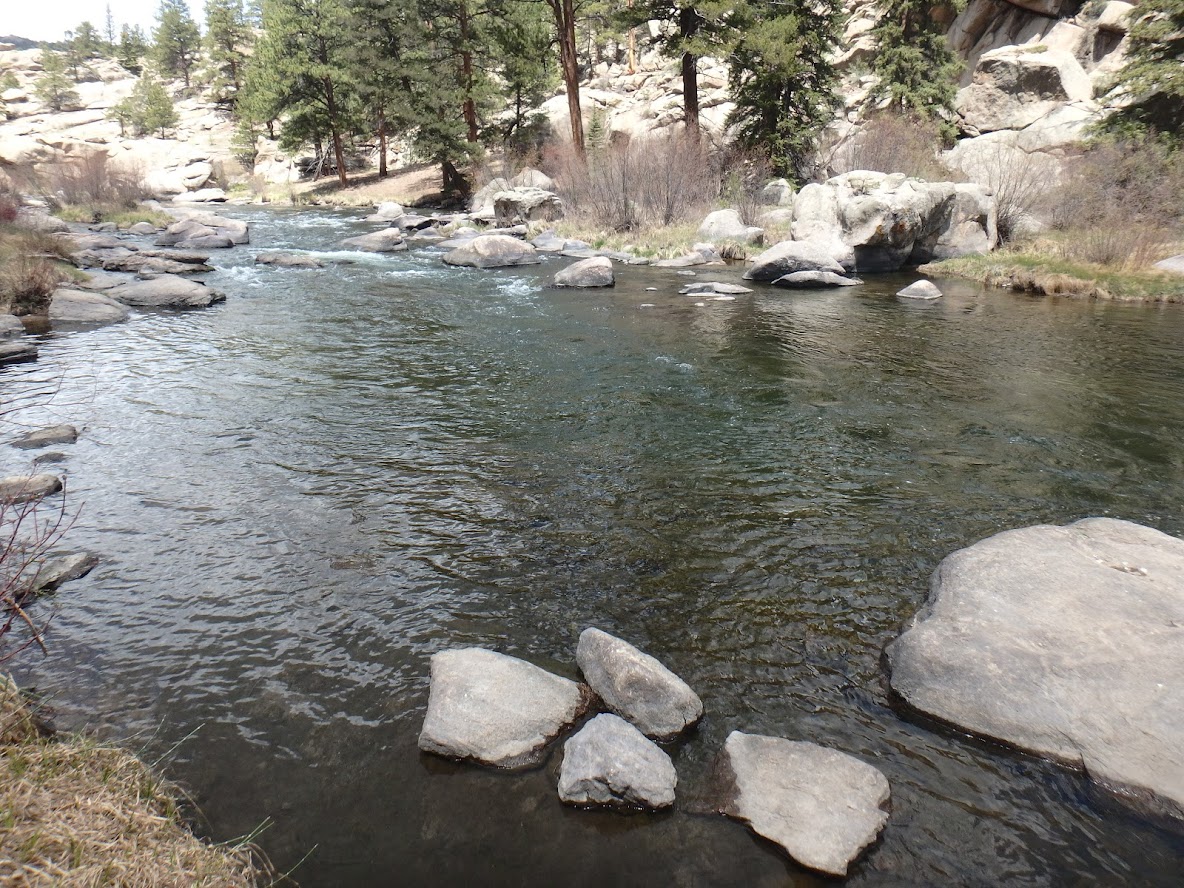 When I paid my day use fee at the entrance gate to Eleven Mile, I asked the attendant if a lot of cars preceded me. She nodded in the affirmative and informed me that I was the the twenty-third. I counted cars, as I drove to my favorite spot, and I tallied twenty-two, before I parked next to a silver pickup truck at my favorite pullout on the east side of the road. The temperature at 10:30AM was 51 degrees, and high gray clouds blocked most of the sun’s warming rays. I climbed into my waders and wore my long sleeved Columbia undershirt and a light fleece, and then I pulled on my raincoat as a windbreaker. I assembled my Sage four weight and promptly embarked on a short hike along the dirt road to my favorite angled trail. I descended quickly and then ambled along the fisherman path, until I was next to an attractive pool just above a series of narrow deep plunge pools. This was my intended starting point, and I was surprised that I did not encounter other anglers given the number of parked vehicles along the road. 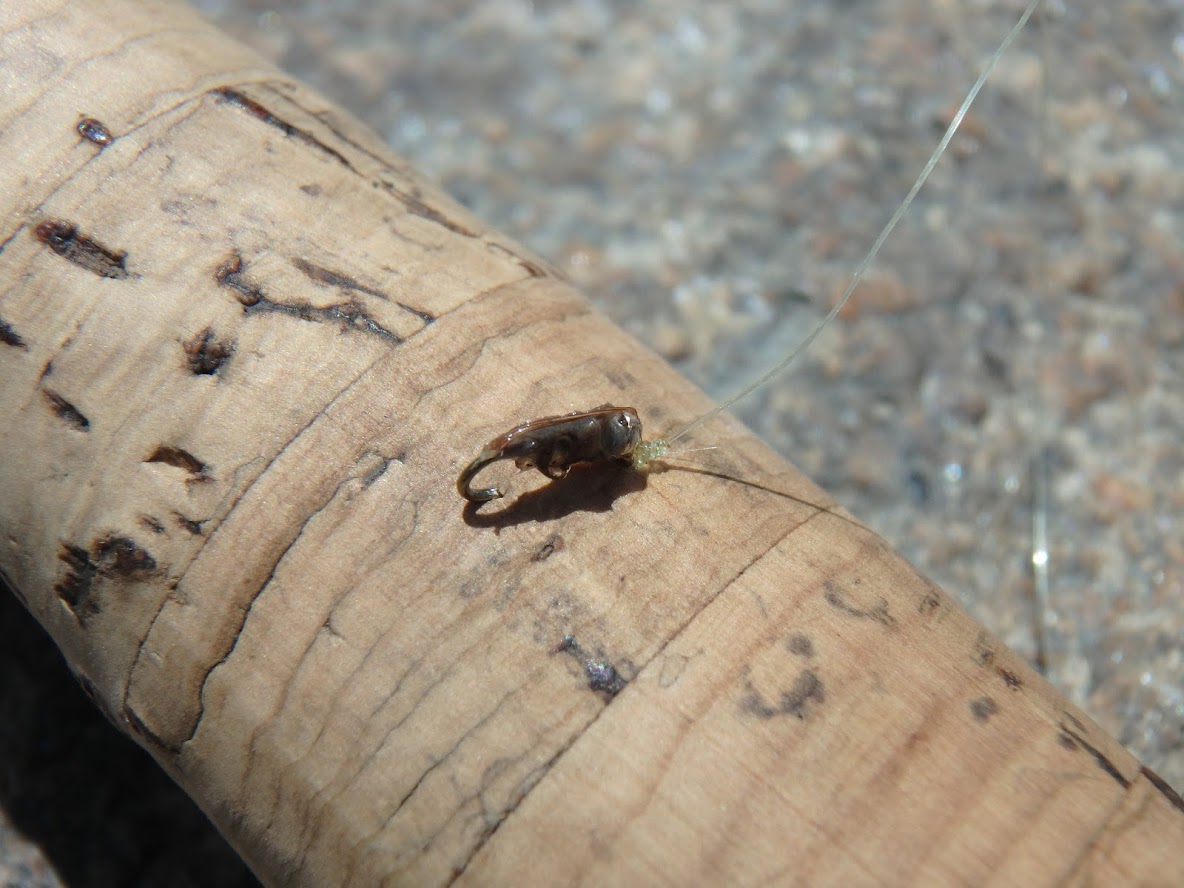 RS2 Worked Before the Hatch 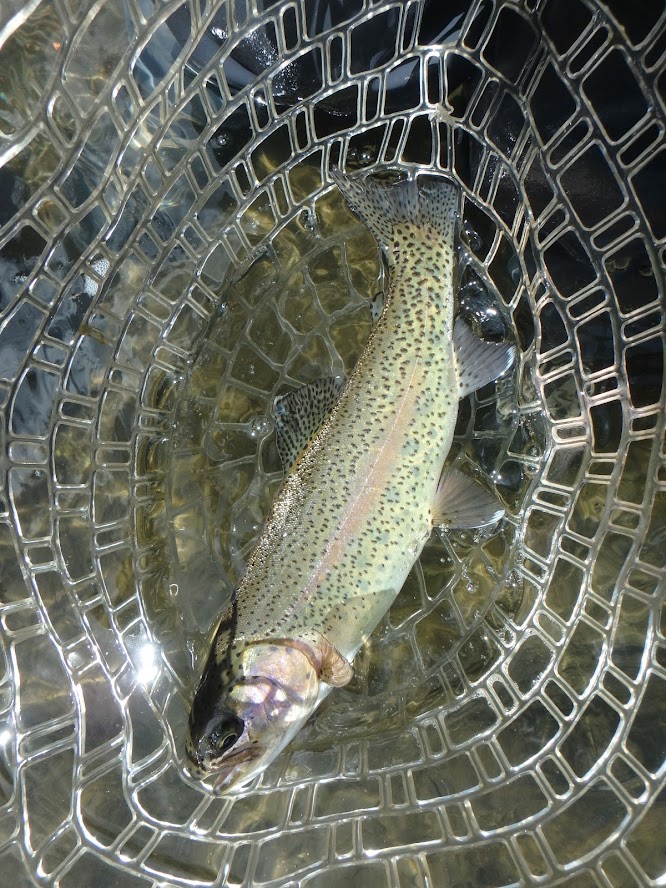 An Early Catch on RS2

I quickly surveyed the water and failed to observe any insect activity, so I decided to prospect the faster seams, pockets and runs with a dry/dropper method. I knotted a yellow fat Albert to my line and then added an ultra zug bug and beadhead hares ear nymph. I covered some attractive pockets and runs with no response, so I stripped in my line and replaced the ultra zug bug with a classic RS2. This move proved advantageous, when I hooked and landed a fine rainbow trout and a brown trout. Both of the feisty trout were thirteen inches or greater, and they confidently snatched the RS2, as it drifted behind the fat Albert. I actually landed another rainbow first, but the fly was embedded along the side of the head, and not in the mouth, and my rules dictated that it was not part of the fish count. 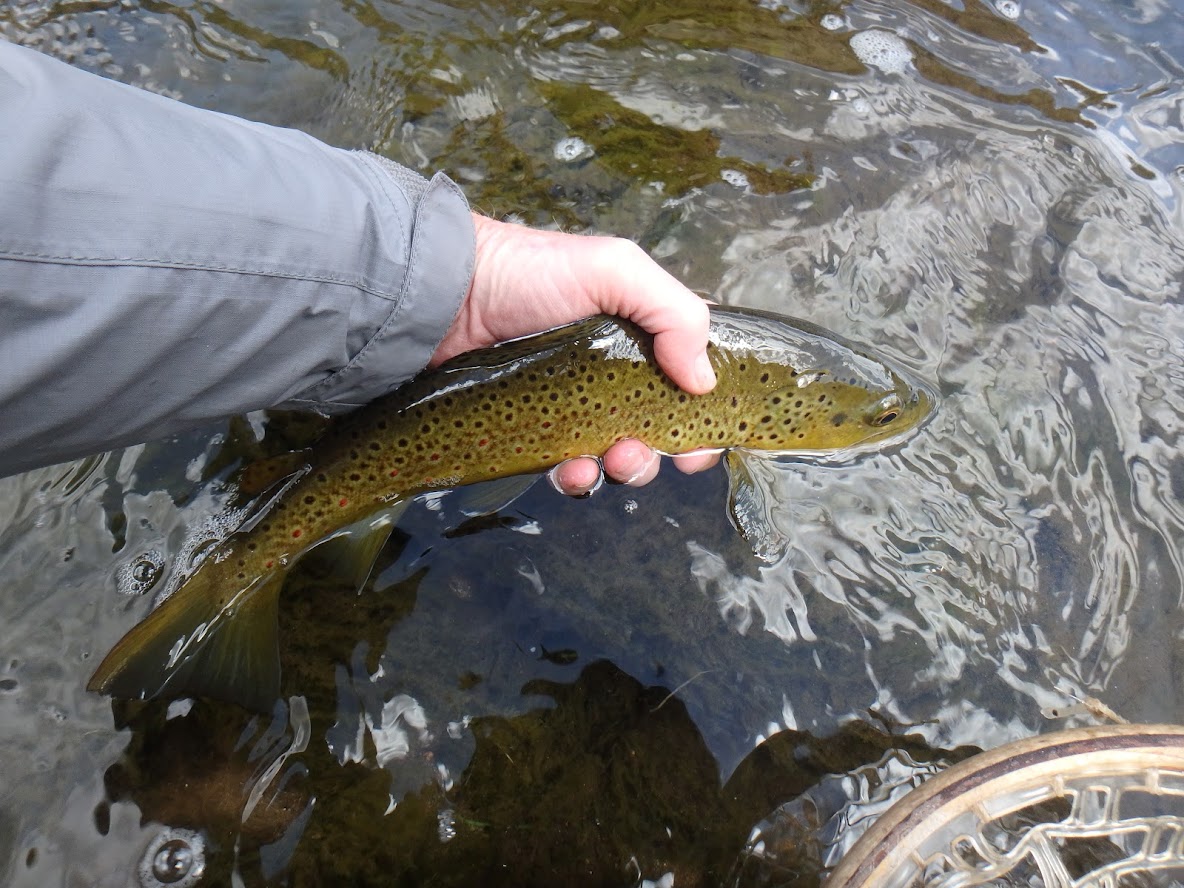 As the first hour elapsed, I passed by an attractive pool, and with noon approaching I spotted two fishermen in the faster water below the pool. It was lunch time, so I chose to retreat to the edge of the pool in order to claim it, before the downstream anglers arrived. The ploy worked nicely; as I munched my sandwich, carrots and yogurt and observed the pool, while the unknowing intruders trudged up the path to the road high above. By 12:15 a series of surface disturbances caught my attention, and the cadence of rises accelerated. This circumstance in turn caused me to consume my lunch rapidly, and my heart rate elevated a few notches in anticipation of some dry fly action.

I snipped off the dry/dropper paraphernalia and knotted a single CDC blue winged olive to my line. By now I could see quite a few little olives floating on the surface, and the number of feeding fish approximated five. The main current on my side of the river ran along an exposed boulder and then flowed downstream for ten feet, before it curled toward the bank and eddied back to the large rock. The fish were spread out across the area, where the current began to curl, and several were spaced on the downstream edge of the eddy circle. I cautiously navigated along the bank, until I was below the eddy and positioned myself to drop casts to the area of the rises.

The hatch continued for an hour, as some dark clouds blocked the sun and the wind periodically gusted. I cast the CDC BWO and a Klinkhammer BWO to the rising fish during this period, and I am embarrassed to report, that I flunked the dry fly fishing exam. I was unable to encourage a sip from any of the steady feeders within twenty feet of my position. As the emergence waned at one o’clock, I surrendered to the nervous river residents and moved on. The wind and glare made it very difficult to track the small CDC tuft, and consequently drag was probably present more than I realized. Compounding the difficulty was the eddy and the related irregular currents that impacted the drift.

When I finally moved on, I was quite disappointed with the lack of dry fly success, but I consoled myself with the thought that cloudy conditions would prevail in the afternoon, and this would likely spur additional waves of blue winged olives. In the meantime the sun peeked out sporadically, and the hatch ended, so I reverted to the dry/dropper technique. I once again chose the yellow fat Albert and continued with the hares ear and a sparkle wing RS2. I reasoned that baetis nymphs were still prevalent in the drift and likely active with additional emergences expected. 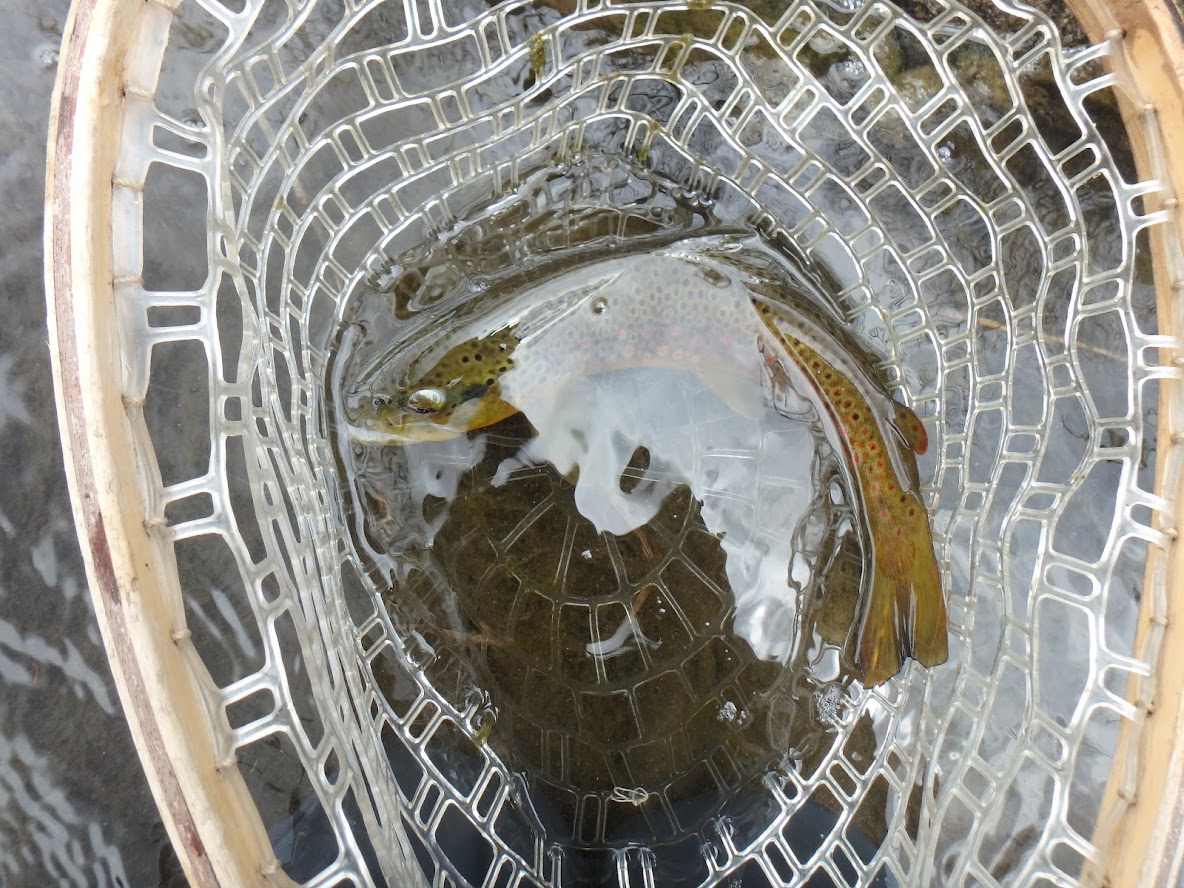 The thinking was somewhat accurate, as a very healthy brown trout stopped the fat Albert, when it nabbed the RS2 in a narrow ribbon of slow water along the left bank. I was surprised and quite pleased with this good fortune, but then a significant amount of time elapsed with no action in spite of casting to some quality spots. I stripped in my flies and made another change. I flipped open my fleece wallet and scanned the contents and elected to try a bright green go2 sparkle pupa. I speculated that the green flashy body might attract the attention of the rainbow trout. I retained the hares ear as the top fly and continued prospecting to pockets, riffles  and pools of moderate depth. 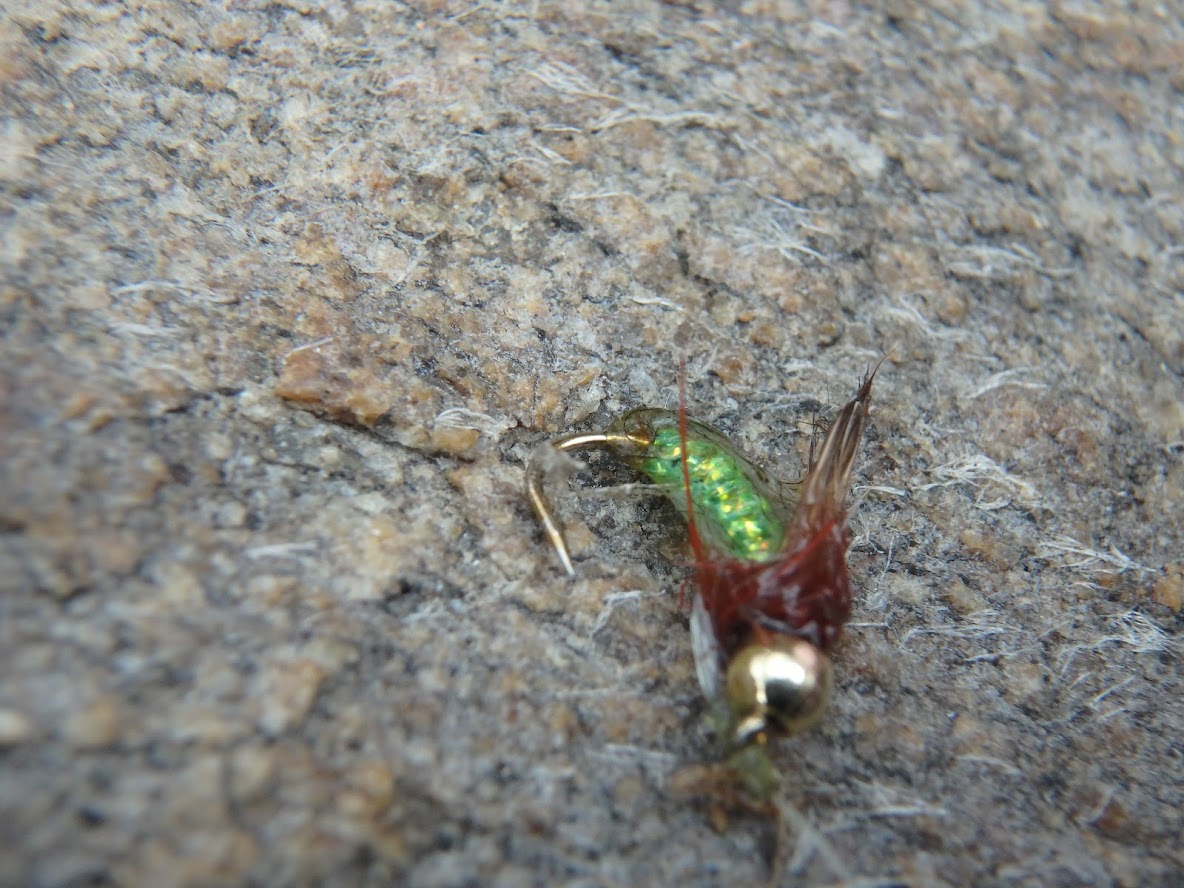 Amazingly the bright green caddis became a desired commodity. The catch rate was not torrid, but it was more than satisfactory, as the fish counter climbed from three to nine by the time I quit at 4PM. At 2PM clouds once again rolled in, and a sparse baetis hatch made an encore. This prompted me to replace the hares ear with a sparkle pupa, and I stayed with this combination for a fair amount of time. The caddis pupa continued to fool a fish or two, but the RS2 was ignored, and it seemed that some very appealing areas failed to deliver. I concluded that the caddis pupa worked better when combined with a larger heavier nymph, so I matched it with an ultra zug bug for the last hour. 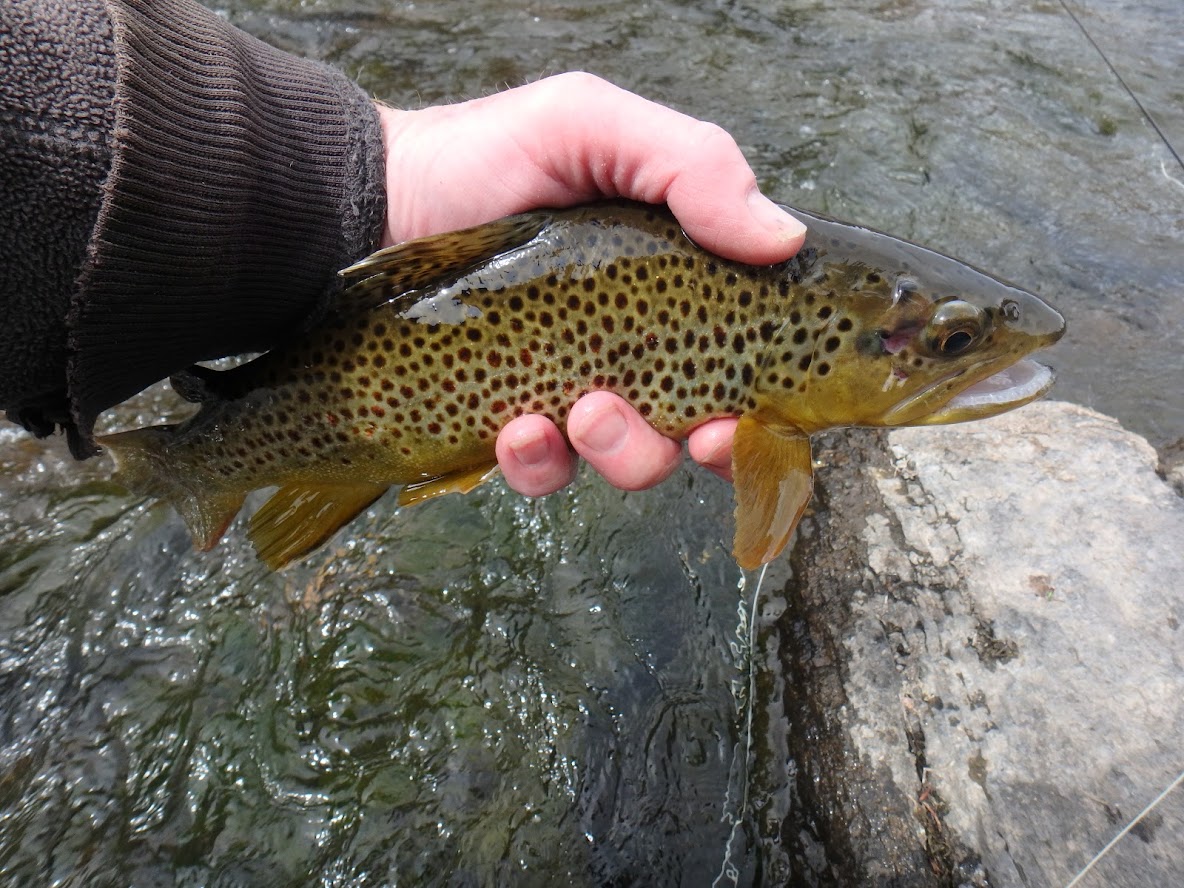 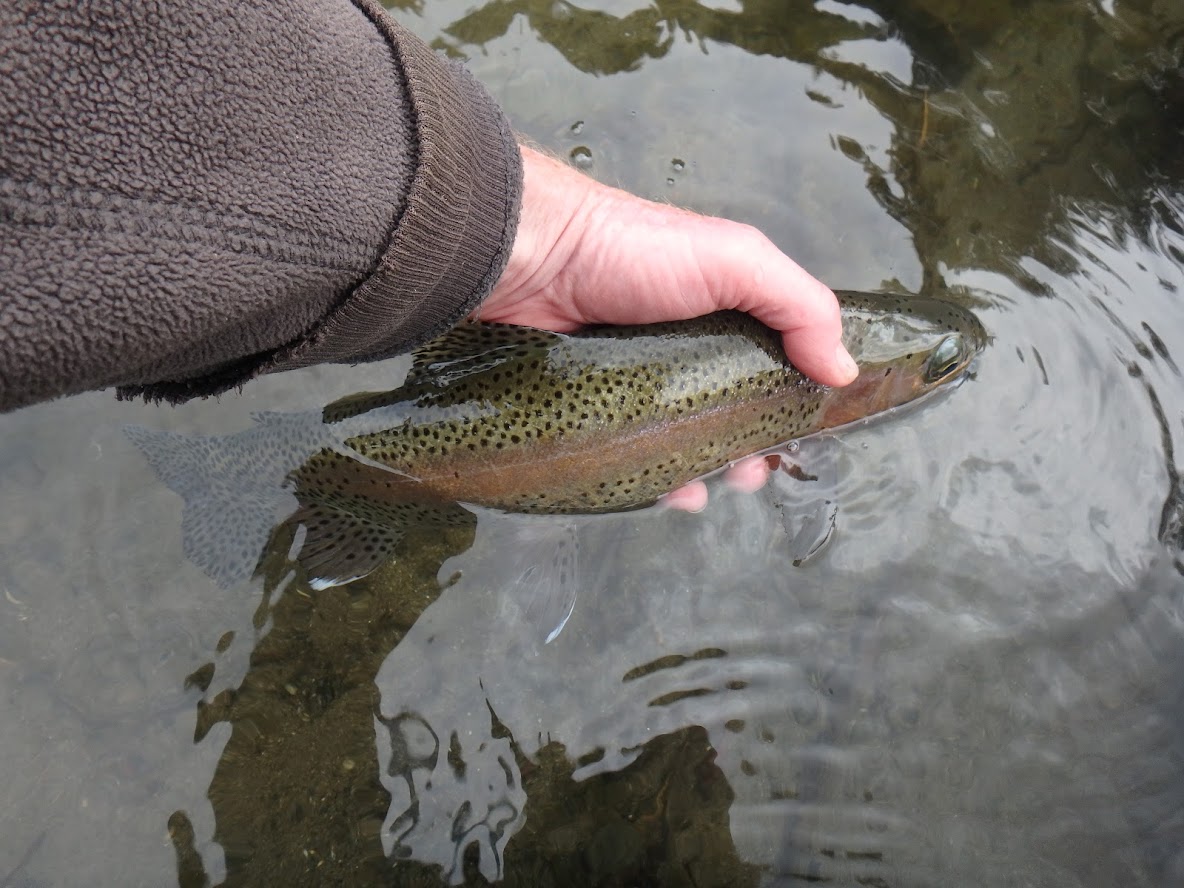 I encountered four anglers during the afternoon upstream migration, but these gentlemen focused on pools, and I was more interested in the pockets and runs among the many exposed boulders. My preference was very complementary with the other fishermen, and I enjoyed the steady prospecting and the surprise created when a trout suddenly intercepted the caddis pupa, which generated an intuitive hook set. My approach required an abundant amount of wading over slimy rocks and repetitive casting, but the quality of the fish justified the energy sapping method. As I stated at the outset of this narrative, persistence was the main key to my success. 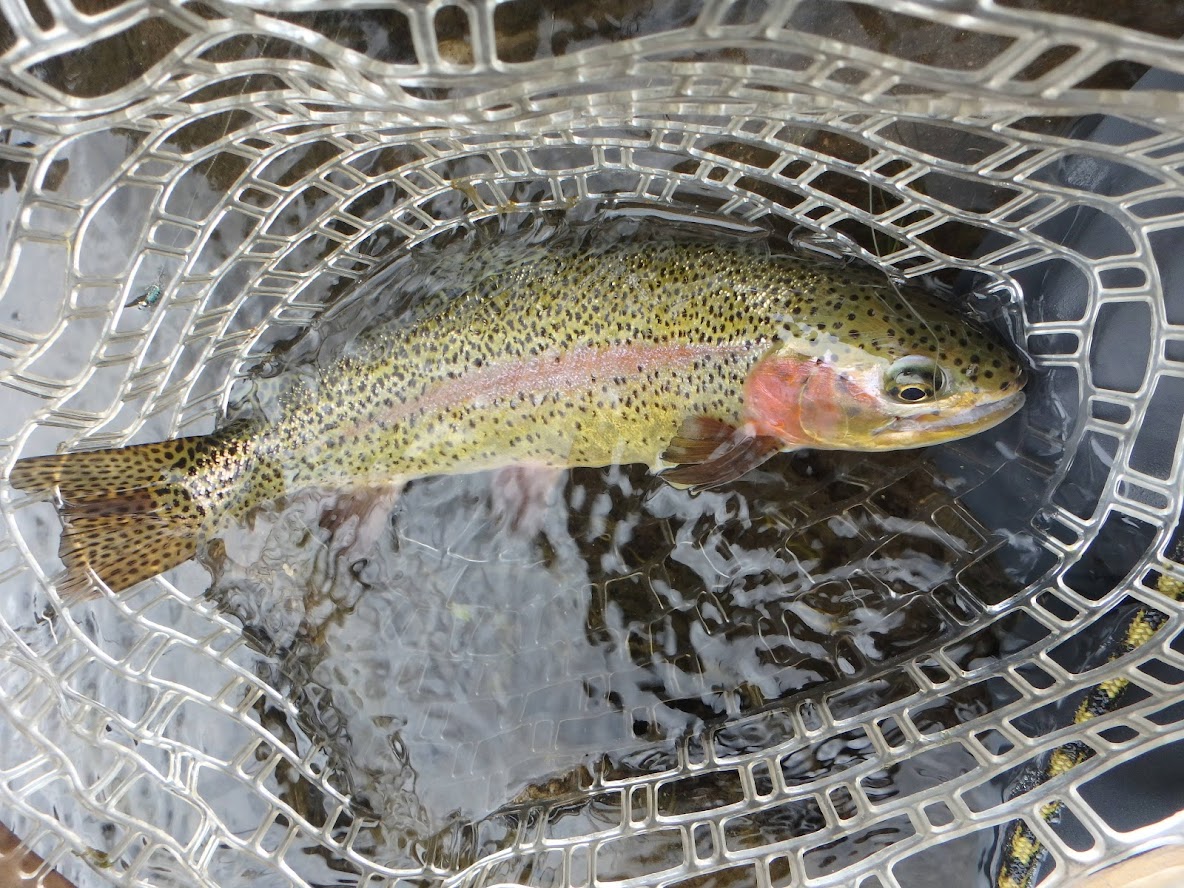 The Catch of the Day

In summary I landed nine quality trout on Thursday, May 16 in Eleven Mile Canyon. Four were muscular brown trout and four were streaking rainbow trout. The ninth and best fish of the day was a husky seventeen inch cutbow, and it served as the exclamation point on a superlative day of fly fishing. Every one of the nine fish that rested in my net were thirteen inches or greater. I suspect that I will revisit the South Platte River again, as run off prevails on Colorado freestone rivers.