My trip to the Arkansas River on May 3 was perplexing and frustrating. The caddis hatch was in reality an egg laying and dapping event, but I was unable to crack the code. I continued to follow the ArkAnglers’ web reports, and I even began exchanging emails with the person in the shop who updates the information. His name is Braden, and he suggested that I try moving upstream to the leading edge of the hatch, in the event that I face similar circumstances in the future. 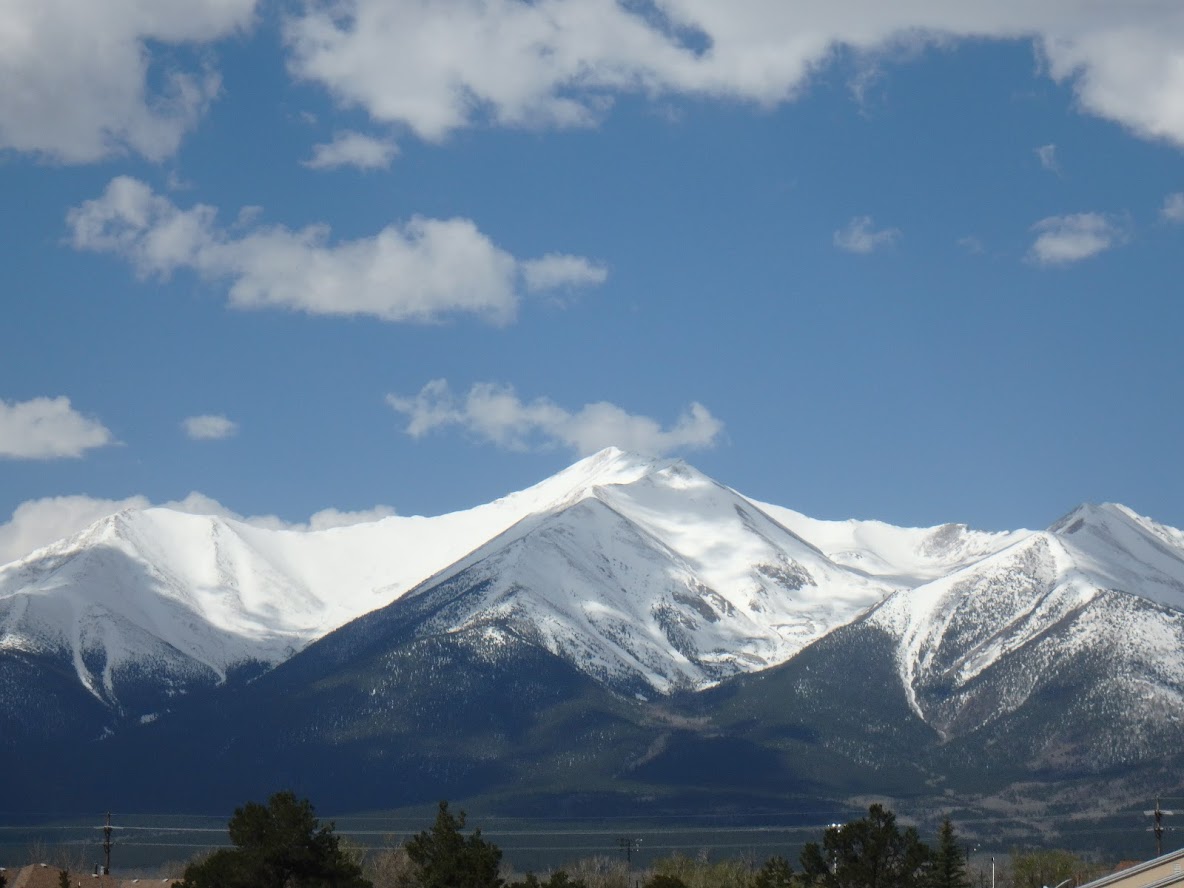 The cool weather toward the end of the previous week halted the caddis hatch and its upstream advancement, but ArkAnglers advised that a warming trend over the weekend and during the early part of the new week would renew its progression. On Tuesday morning May 14 I decided to test their advice, since the forecast predicted sunny skies and  highs in the seventies. I launched my excursion at 7AM and arrived at a dirt parking lot at South Main in Buena Vista by ten o’clock. The last ArkAnglers report cited caddis as far upstream as Brown’s Canyon, so I theorized that they might make an appearance in Buena Vista with the advent of warm temperatures on Tuesday.

The dashboard thermometer displayed sixty degrees, as I donned my waders and assembled my Sage four weight for a day of fishing. When I was prepared, I found a gravel path and traced it along the rim of the canyon, until I arrived at a bridge. The trail continued across the bridge and then linked to BLM land on the other side, but the properties on both sides of the river downstream were private. I reversed direction on the path, until I found a viable, although steep and rocky route to the river. Once I was on the shoreline I moved downstream a short distance, and then I rigged my line with a strike indicator, split shot, beadhead ultra zug bug and beadhead bright green go2 caddis pupa. 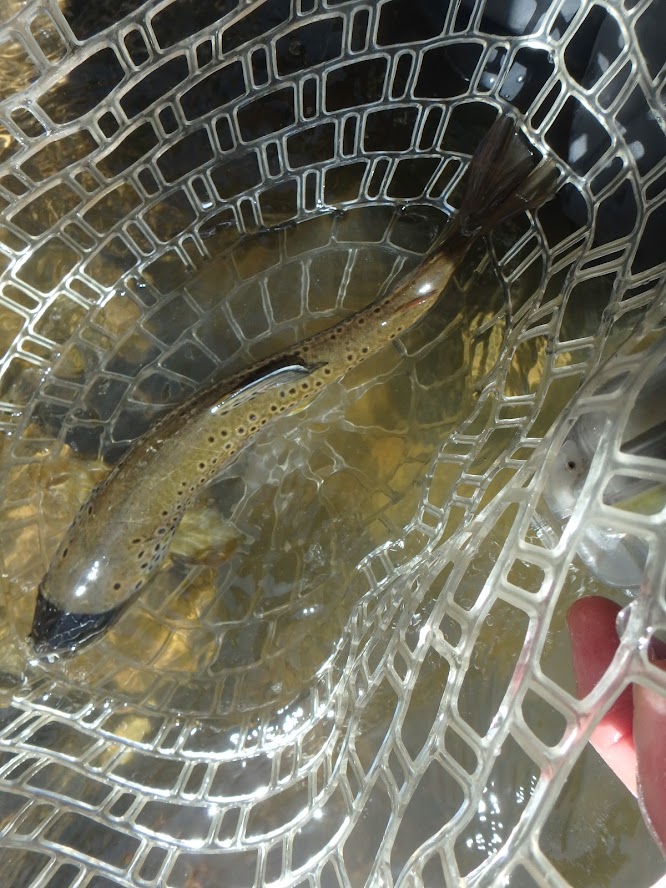 The river was dirtier than I expected, but visibility along the edge was likely acceptable. I advanced upstream and probed the deep pockets and runs next to the bank with the nymphing system, and after thirty minutes I finally connected with a twelve inch brown trout that grabbed the ultra zug bug on a lift at the tail of the drift. 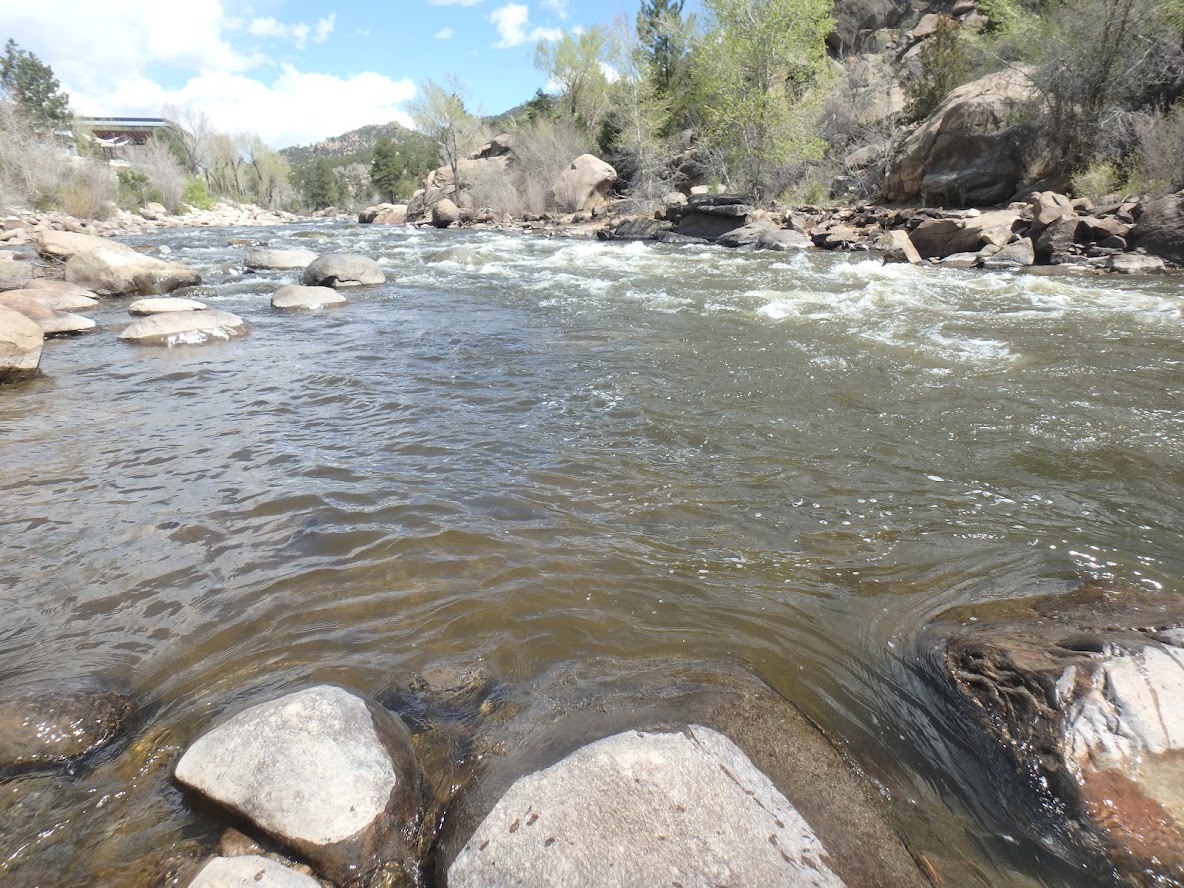 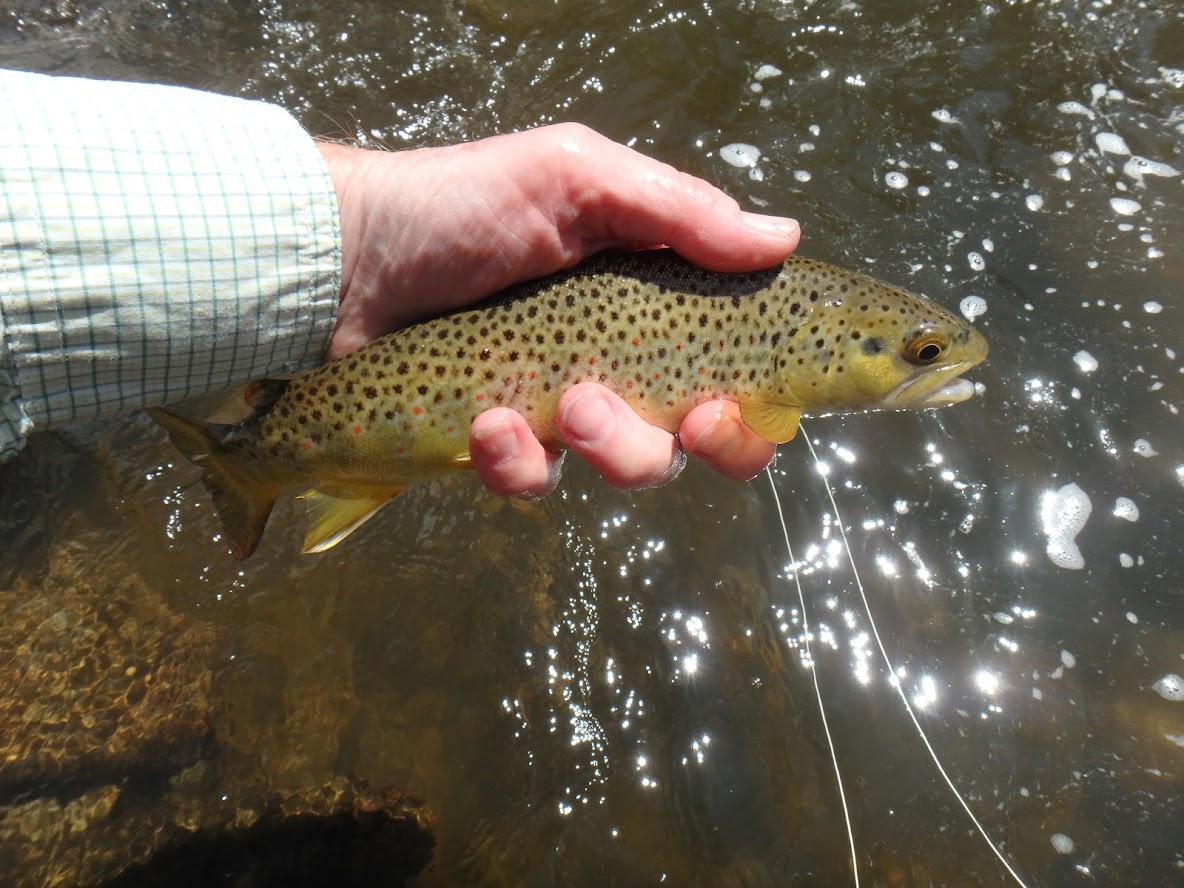 I continued with this method until the stream bed widened, and this created more riffles and runs of moderate depth. I modified my approach with the change in river structure by switching to a dry/dropper configuration. A yellow fat Albert occupied the indicator position, and the go2 caddis and ultra zug bug were retained as droppers. Shortly after the conversion another fine twelve inch brown found my net, and my fish count rested at two, when I paused for lunch.

After lunch I skipped around the whitewater park, as it consisted of huge deep pools between man-made dams, and this type of water was not conducive to the dry/dropper technique. Above the whitewater park the river once again grew wider, and this created a section of pockets and moderate riffles. I managed to hook and land two small brown trout between the whitewater park and the footbridge that accesses the Midland Trail. During this early afternoon time frame I spotted three blue winged olives, when some clouds blocked the sun, and I responded by swapping the ultra zug bug for a soft hackle emerger. The move had no impact on my meager fishing success, and I climbed the bank, before I reached the footbridge and hiked back to the car. It was 1:30PM, and I pondered my next move.

My main purpose was to interact with the famous caddis hatch, but I saw no evidence of caddis in the South Main section of the Arkansas River. One option was to cross the footbridge and follow the Midland Trail downstream to the whitewater park and then fish back up to the bridge on the opposite side. Hopping in the car for an early return to Denver actually seemed more appealing than fishing the other side of the river in Buena Vista. I also considered driving upriver to the section bordered by some tunnels, but this was even less likely to place me in caddis activity. Finally I decided to drive back toward Salida, since the heaviest reported hatches were in that area.

I threw my gear in the car and drove to the place where CO 291 crosses the Arkansas River. I noted that the sign designated this section as the Pridemore Lease, and previously it was named the Smythe Lease. I shouldered my backpack and snapped in my front pack and grabbed my rod and climbed the wooden steps over the fence and hiked along a crude cattle path for .3 mile, until I angled down a rough bank populated with prickly pears and thorny shrubs to the edge of the river. I was embarking on a last ditch effort to salvage my day. 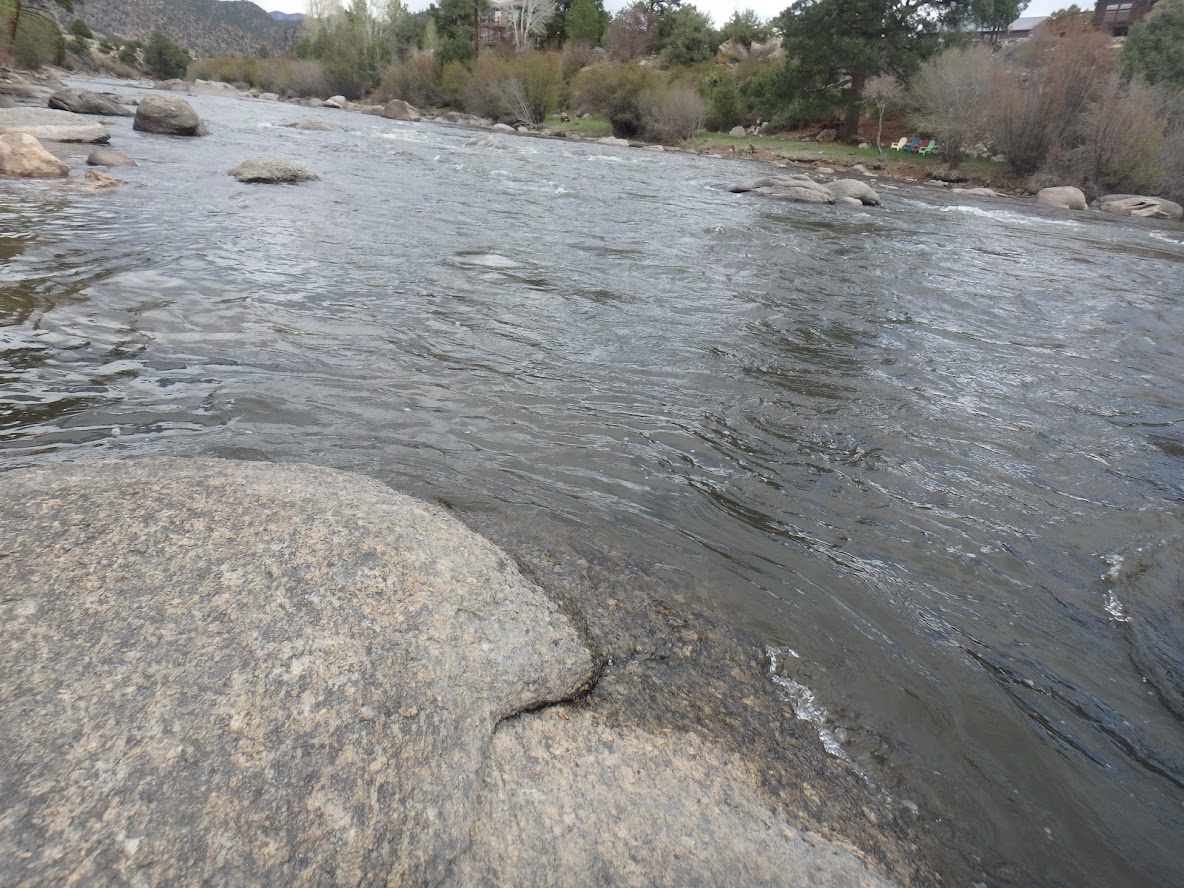 The fat Albert generated several refusals during the earlier session in Buena Vista, so I decided to exchange it for a peacock hippy stomper. Perhaps the smaller foam pattern would actually create some eats. I retained the go2 caddis and ultra zug bug for a bit, but after prospecting some fairly attractive deep runs among large submerged boulders with no response, I replaced the unproductive go2 caddis with an iron sally. The iron sally has become a go to favorite for the Arkansas River.

The hippy stomper was difficult to accurately cast with the two large weighted flies, and the wind exasperated the situation, so I once again switched the top fly. This time I chose a size 8 Chernobyl ant from my fly box. The Chernobyl, iron sally and ultra zug bug remained on my line for the last two hours of my time at the Pridemore Lease. 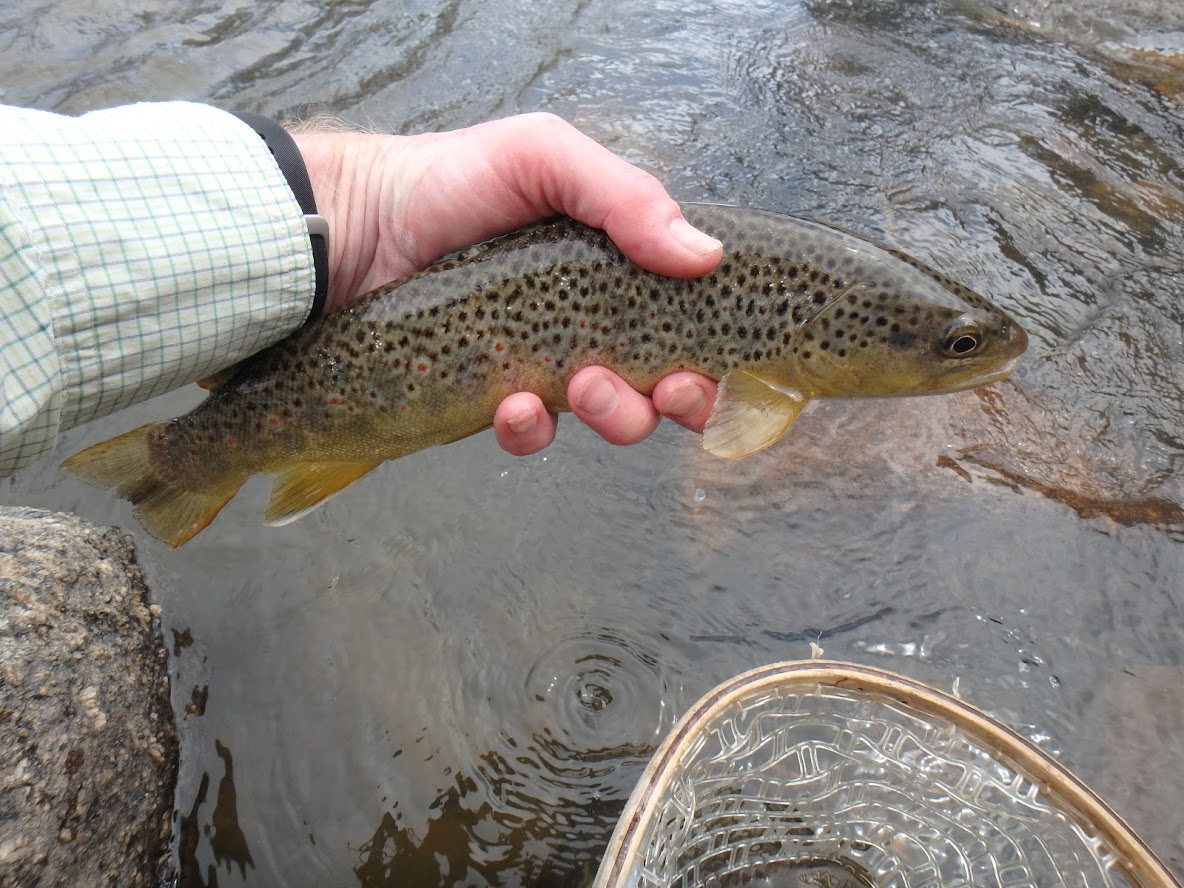 Did my luck change? Was I engulfed by swarms of emerging or mating caddis? Yes and no. I steadily worked my way upstream to the CO 291 bridge and landed six additional brown trout before I retired at 4PM. All the afternoon trout were twelve inches or greater and included a very handsome ink spotted fifteen incher. Several muscular thirteen and fourteen inch browns also occupied my net. 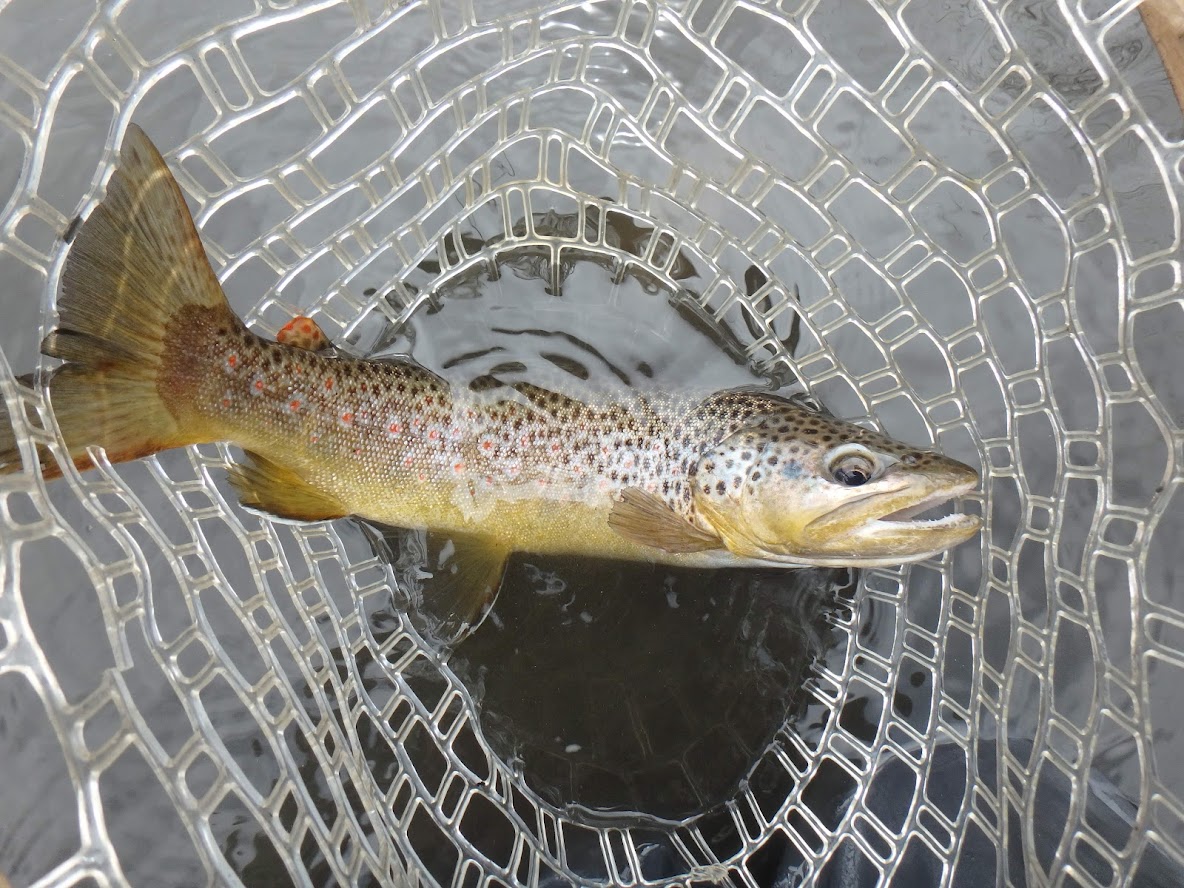 I observed six dapping caddis during this time, so I never found the mythical caddis hatch. All the brown trout came from runs of three to four feet in depth next to large boulders. Several responded to a lift at the end of the drift. Once I determined the type of water that produced results, I moved quickly and skipped huge pools and marginal pockets.

Once again the blanket caddis hatch evaded my search, but I did manage to salvage Tuesday on the Arkansas River with six very respectable brown trout from the Pridemore Lease section. Along with the morning results I ended the day with double digits, and given the absence of caddis and blue winged olive activity, that was a victory for this fisherman.