Jane and I returned from four fabulous days in Moab on Saturday, November 11, and I noted that the weather forecast predicted a high of 69 in Denver on Monday, November 13. I thoroughly enjoyed four days of hiking and cycling in the Utah canyons, but I also missed my frequent weekly fly fishing adventures. An abnormally warm day in the middle of November in Colorado was too much to pass up.

The time changed on November 5, and consequently I planned an earlier start to my fishing day. Prior to the time change, the prime period for fly fishing was 11AM until 3PM, so with a one hour fall back, the ideal time shifted to 10AM until 2PM. I departed the house at 7:45AM, and this enabled me to arrive at the kayak parking lot below Gross Reservoir by 9AM. I quickly assembled my Orvis Access four weight and pulled on my waders. The temperature was around fifty degrees, so I tied my fleece cardigan around my waist and under my waders. I knew I would overheat on the hike to the stream, if I wore the fleece, but I desired the insurance of an extra layer in case I fished in the shadows of the canyon walls.

Two cars were already parked in the lot, but I never encountered another fisherman during my entry walk. After a decent hike from the parking lot I cut down to the stream and began my quest for South Boulder Creek trout. I knotted a size 12 Jake’s gulp beetle to my line for the trek to the creek, and it remained on my line for the first three hours of fishing. The section that served as my entry point was mostly in sunshine with only five feet along the left bank covered by shadows. 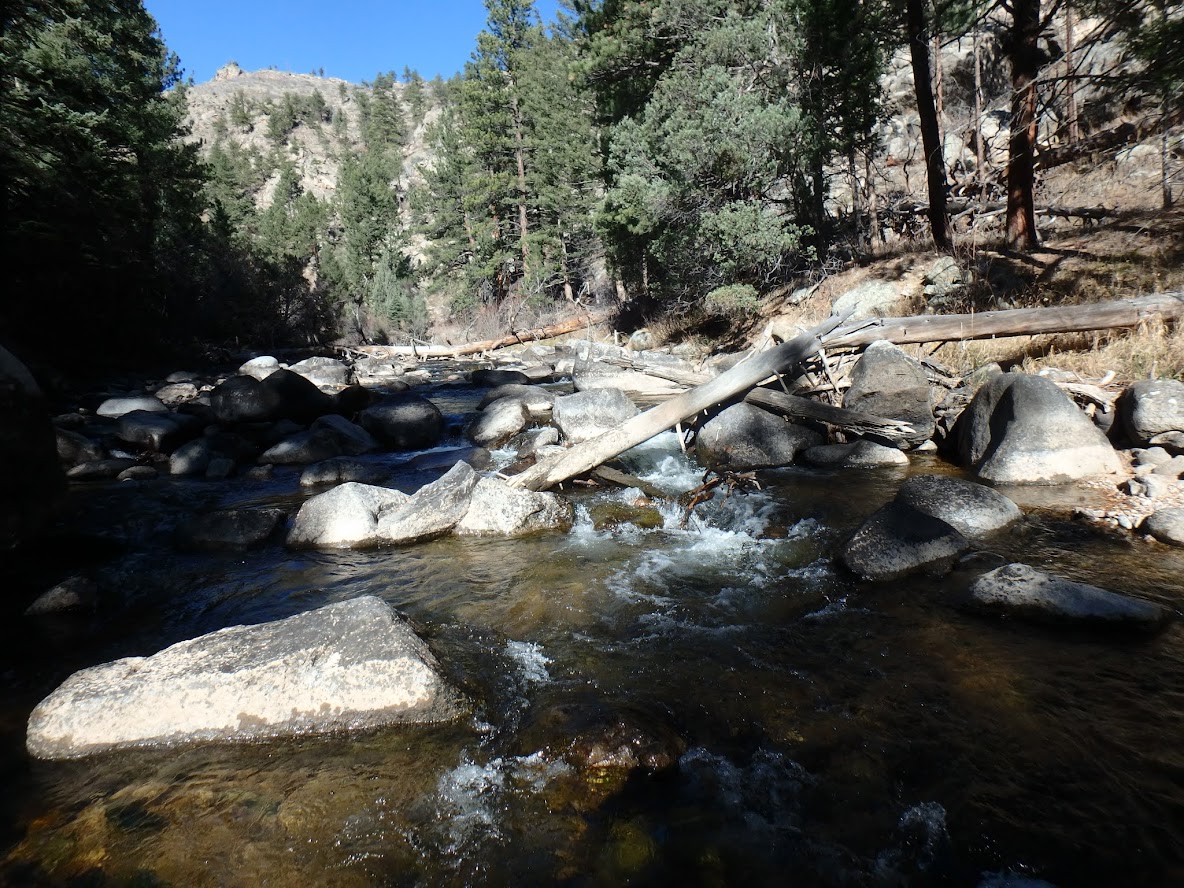 Quite a Jumble of Rocks and Logs

The stream flows were 15.8 CFS, and this level is below ideal, but adequate for enjoyable fly fishing. My outing on 10/17/2017 was strong testimony that excellent fly fishing was available on South Boulder Creek at low flows. I prospected some very attractive water in the first fifteen minutes with no reward for my efforts, but then I lobbed a cast in the shadows in a deep run along the left bank. I was unable to follow the beetle, but a sudden swirl where I estimated my fly to be evoked a quick hook set, and after a short battle I guided a deep olive-colored eleven inch brown trout into my net. I was pleased to register my first fish of the day. 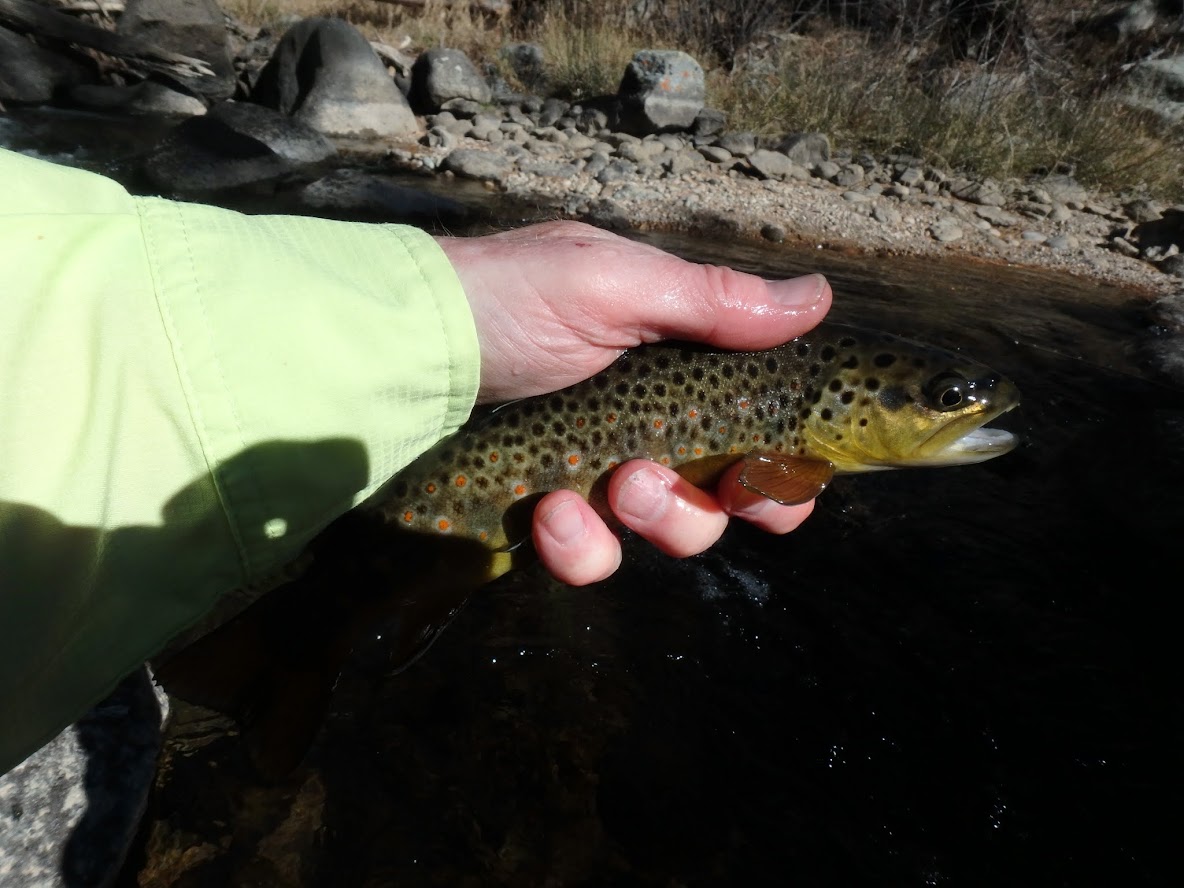 I moved on and landed a second brown, but the catch rate lagged my expectations, so I made an adjustment and added a size 20 RS2 on a two foot dropper. The addition was a solid move, and when I stopped for lunch, the fish count paused at eight including one rainbow and the remainder browns. Two of the netted fish favored the RS2, and six savored Jake’s gulp beetle.

While eating lunch on a large rock bathed in sunlight high above the creek, I observed quite a few small stoneflies, as they fluttered in the streaming beams of sun next to two large evergreen trees. After lunch I persisted with the foam beetle and RS2 combination for a bit, and the RS2 delivered a third trout to my net. My results were decent, but I approached a nice pool and observed several fish rising, so I decided to once again change my tactics. I swapped the RS2 for a size 20 soft hackle emerger with no bead. I applied a thick coat of Gink floatant to the body and fished the emerger in the surface film. I was hoping that the small emerger would cover two bases; blue winged olives and small gray stoneflies. 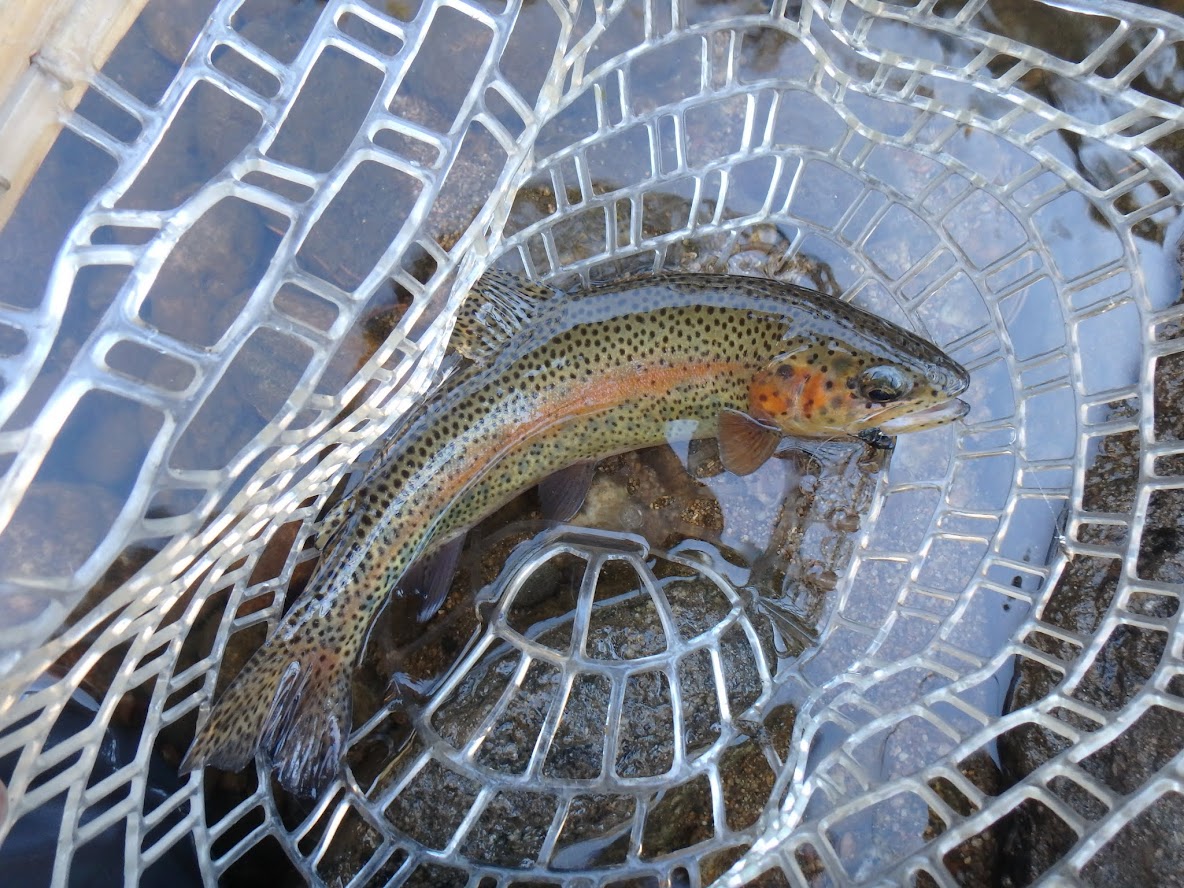 The foam beetle and bwo emerger tandem enabled the fish count to elevate to twelve by 1:30, and two landed trout devoured the emerger. It was gratifying to receive some positive feedback on my greased emerger ploy. At the twelve fish milestone I could attribute three to the RS2, two to the soft hackle emerger, and the remaining seven slurped the beetle. I was rather pleased with my twelve fish day in the middle of November, and I settled on a two o’clock quit time, as the shadows lengthened over the stream.

Just as thoughts of quitting crossed my mind, I noted a pair of fairly large mayflies, as they slowly floated up from the surface of the creek. On my last visit to South Boulder Creek I experienced decent success with a size 16 cinnamon comparadun, so I copied the move and knotted a pale morning dun imitation to my line. I was situated along the right bank above a gorgeous deep run that fanned into a nice deep pool. I began presenting the comparadun on downstream drifts by checking my cast high and fluttered the single dry to the seam at the top of the run. On four successive casts a very respectable rainbow emerged and hovered beneath the mayfly, but on each drift it resisted the temptation to sip the fraud. 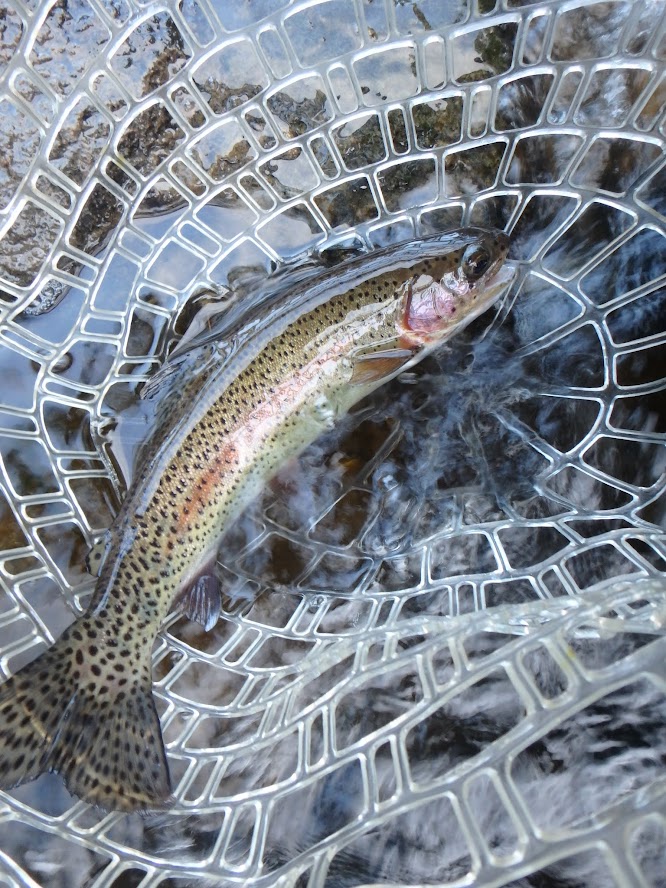 I opted to employ my usual tactic in response to refusals, and I knotted a size 18 cinnamon comparadun to my line. Unfortunately on this occasion, downsizing was not the answer, and the rainbow never budged from its hidden lie to inspect the smaller offering. Perhaps size was not the issue? I pondered the situation and decided to test a size 16 light gray deer hair caddis. A tan body would have been preferable, since the cinnamon color of the comparadun seemed to attract attention, but light gray was the best I could do.

It was one of those situations where making do paid off. During the remainder of my time on the water I added nine trout to the fish count and ended the day at twenty-one. In many cases the first cast to a likely pocket or pool elicited a confident slurp. Several times I watched as a brown trout darted two or three feet to snatch the small drifting caddis adult. I am always amazed by how fast a trout can snatch a piece of food from the surface. 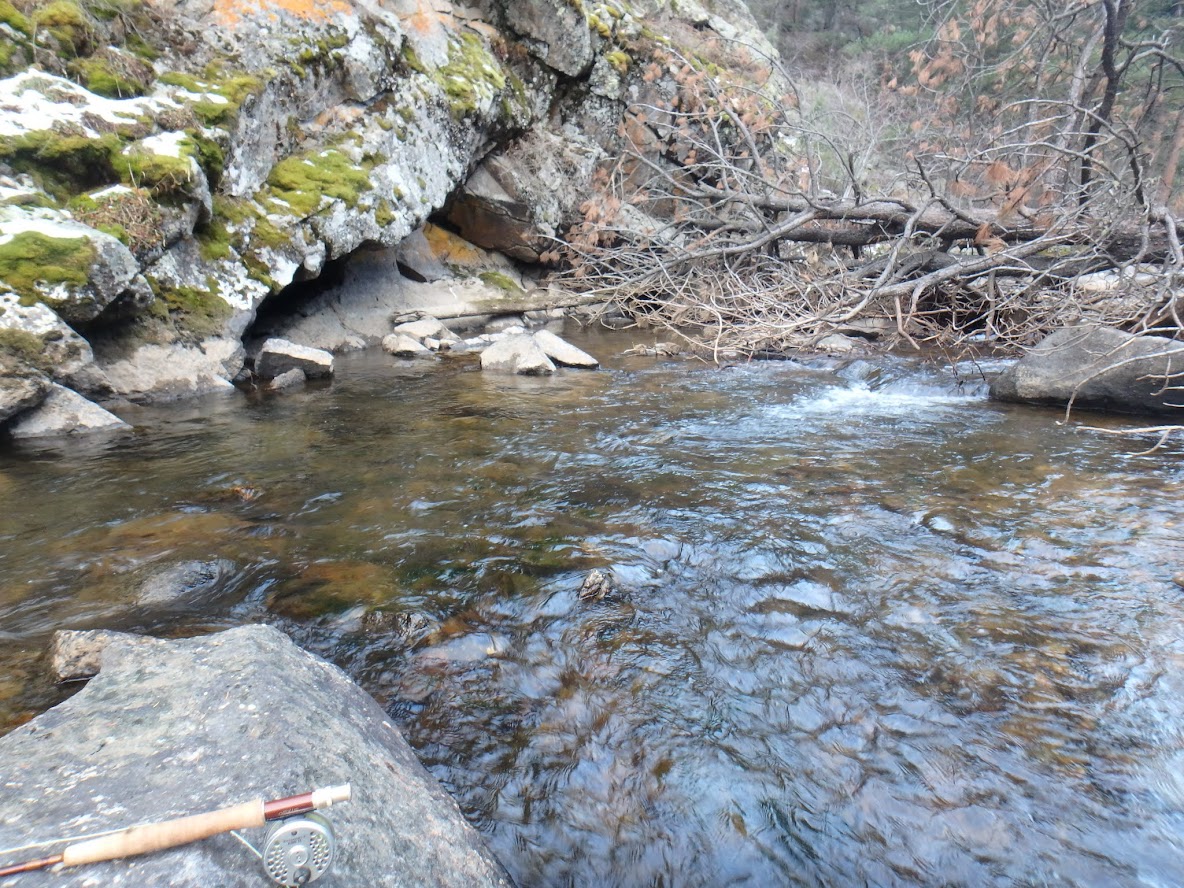 A few minutes before 3PM I reached a convenient point to step out of the water. The path was within a few feet of the bank, so I began the return hike to the car. The sun was now positioned quite low in the western sky, and the entire stream was shrouded in shadows. The temperature dipped noticeably, but my quick strides warmed my body. When I started the car, I checked the dashboard thermometer, and I was surprised to see a reading of 51 degrees.

Monday was a very enjoyable day on South Boulder Creek. I landed twenty-one trout, and sixteen fell for a dry fly. I was quite pleased to experience a twenty fish day on November 13, and I plan to take advantage of any additional unseasonably mild weather breaks.