My son, Dan, and I planned a rare fishing outing for Saturday morning, August 24. Dan is at the stage of his life, where he constantly juggles competing priorities, so a day on the stream with him is time to treasure. I offered Dan several options for fly fishing destinations, and he quickly chose South Boulder Creek. This was music to my ears, since I was itching to return after a fabulous visit on August 15. Green drakes were on the menu, and I was fairly confident that they would remain a significant food source for South Boulder Creek trout.

Dan and I met near the intersection of Coal Creek Canyon Road and CO 93, and we car pooled to the upper kayak lot below Gross Reservoir. We quickly put on our gear and assembled our rods and hit the trail. I chose my Orvis Access four weight to minimize arm and shoulder fatigue. Six other vehicles were parked in the kayak lot, so we knew that we would enjoy the company of other anglers. 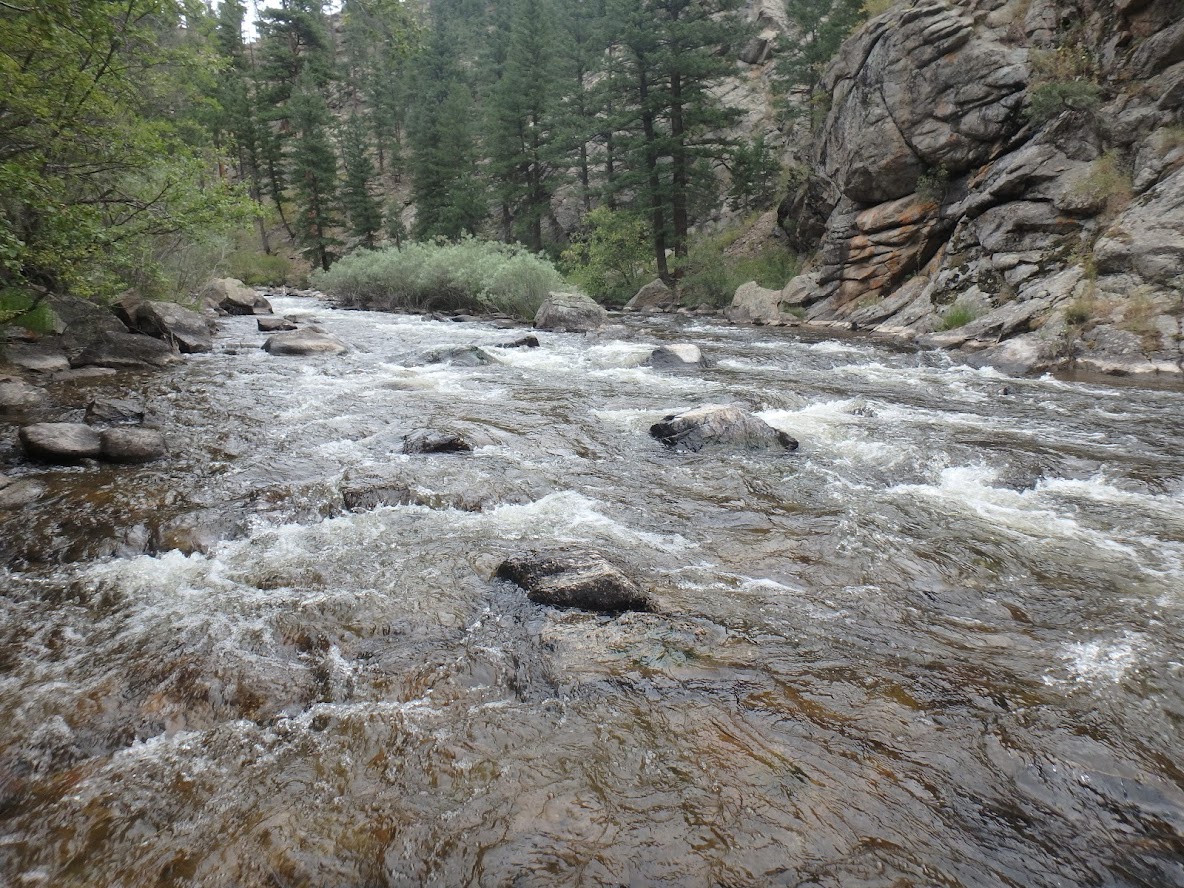 The flows were 117 CFS, and although higher than ideal, they were lower than at any time over the recent months. The sky was overcast, and this resulted in an air temperature in the low sixties, when we departed; however, by noon the sun burned through, and the air temperature soared into the eighty degree range. 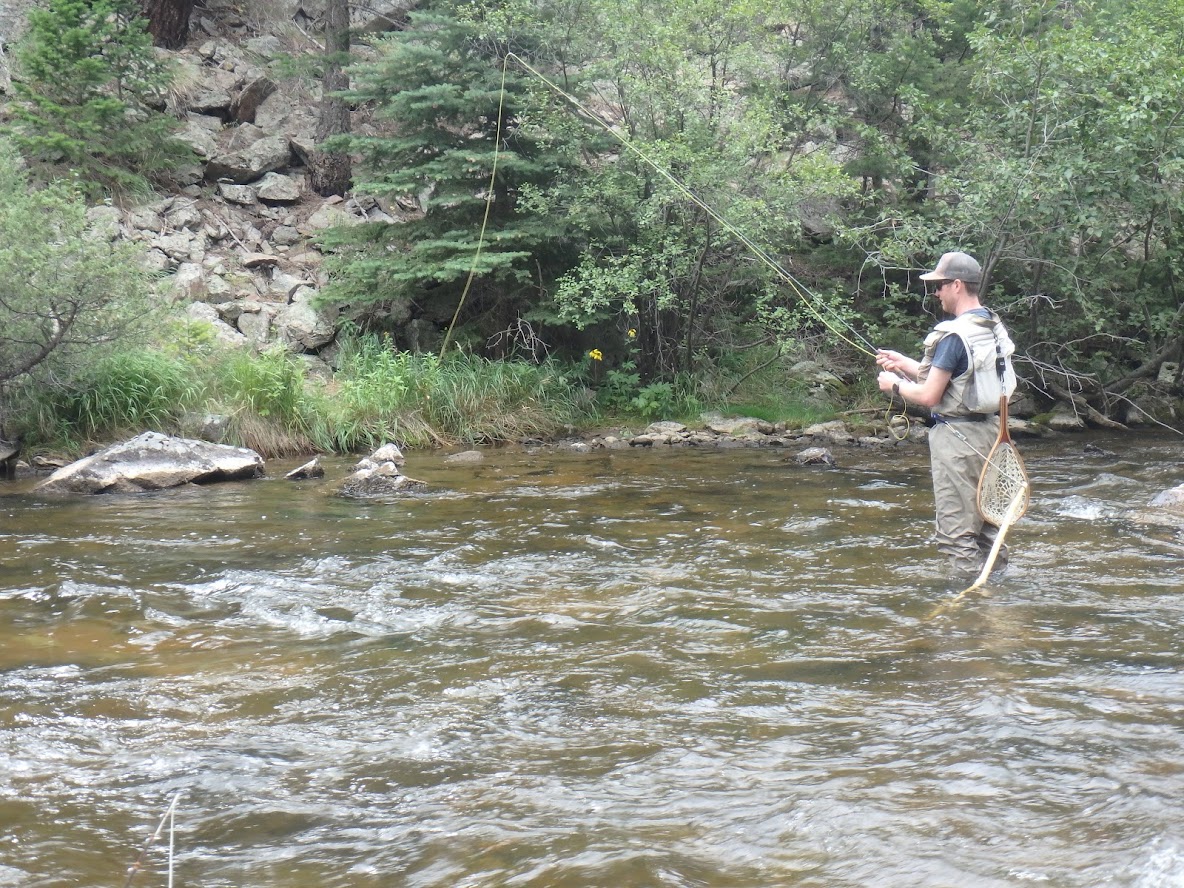 By 10AM Dan and I were situated in the stream and ready to pursue hungry trout. Dan progressed along the north bank of the creek, while I cast to the left side. I suggested that Dan begin with a parachute green drake, and I provided him with three of my winter ties. I watched as he hooked and landed a pair of small browns, but the drake failed to generate interest in some very attractive runs, so I opted for a dry/dropper approach. I knotted a tan pool toy hopper to my line for excellent visibility, and beneath the large foam fly I added a prince nymph and a salvation nymph. These two flies were intended to imitate the nymphal stage of green drakes and pale morning duns. 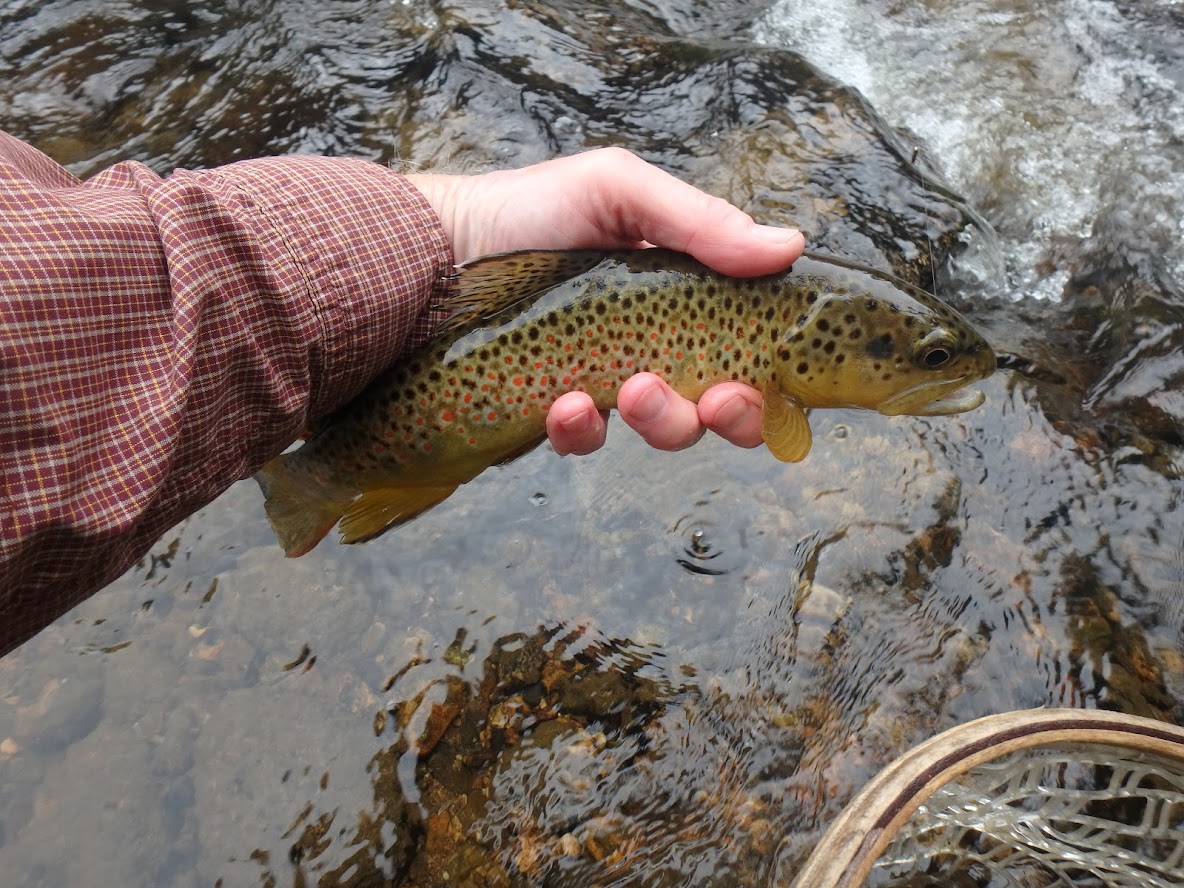 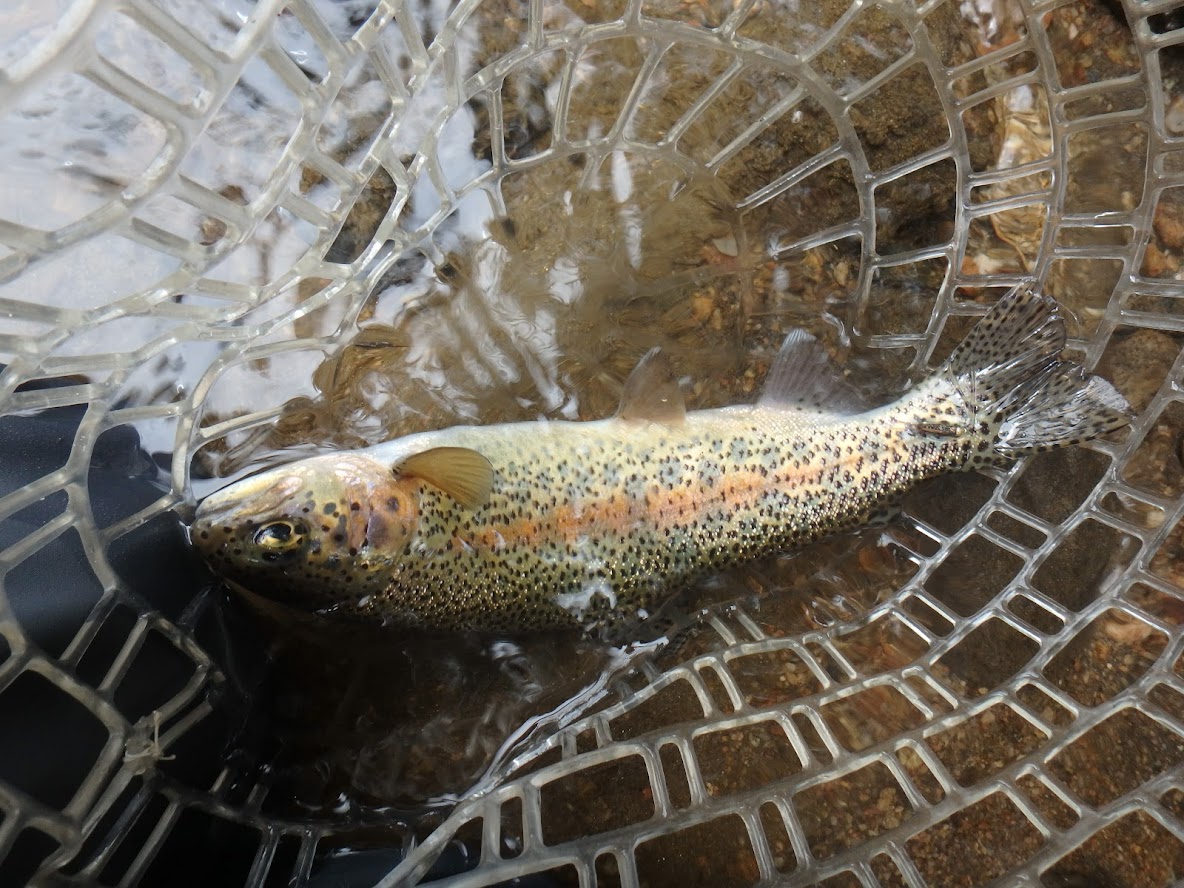 By 11:45 I recorded eleven landed trout, and Dan was in the five range. The action was decent but not as intense, as that which I experienced during the morning on August 15. The prince nymph and salvation accounted for all my fish in roughly equal proportions. Unfortunately our lunch break occurred on a stretch of the stream, where it was narrow and high velocity, and this prevented us from crossing to eat together. Dan found a nice perch high above the creek, while I occupied a 5′ X 5′ flat rock along the south bank. 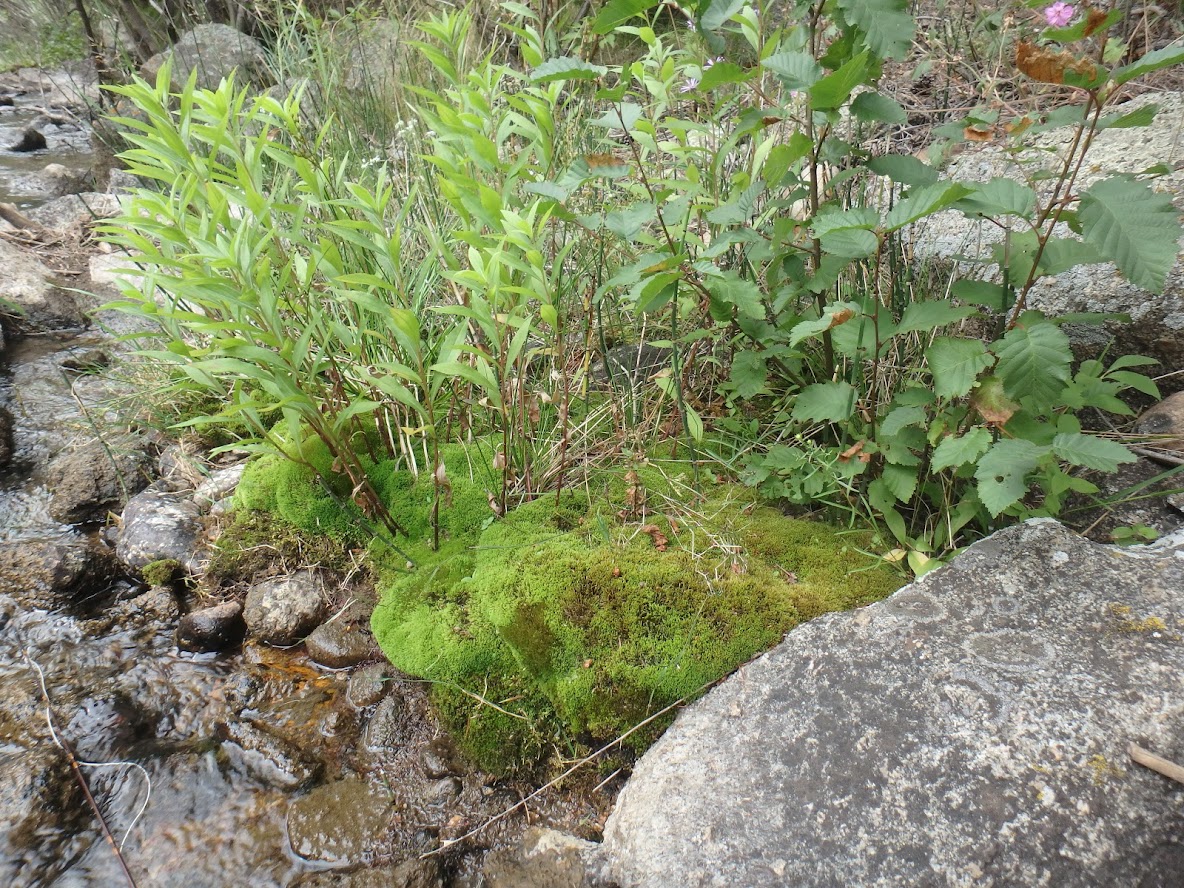 Green drakes had not made an appearance by the time I finished munching my lunch, but I decided to join Dan in prospecting the large mayflies with the hope that the trout possessed long memories. Ironically Dan observed my higher paced action before lunch, and he converted to a dry dropper with a fat Albert and prince nymph! I suppose this is an example of the “grass is always greener” adage. I landed a few trout on the parachute green drake in the early afternoon, but Dan went on a tear and jumped his fish count to nine. 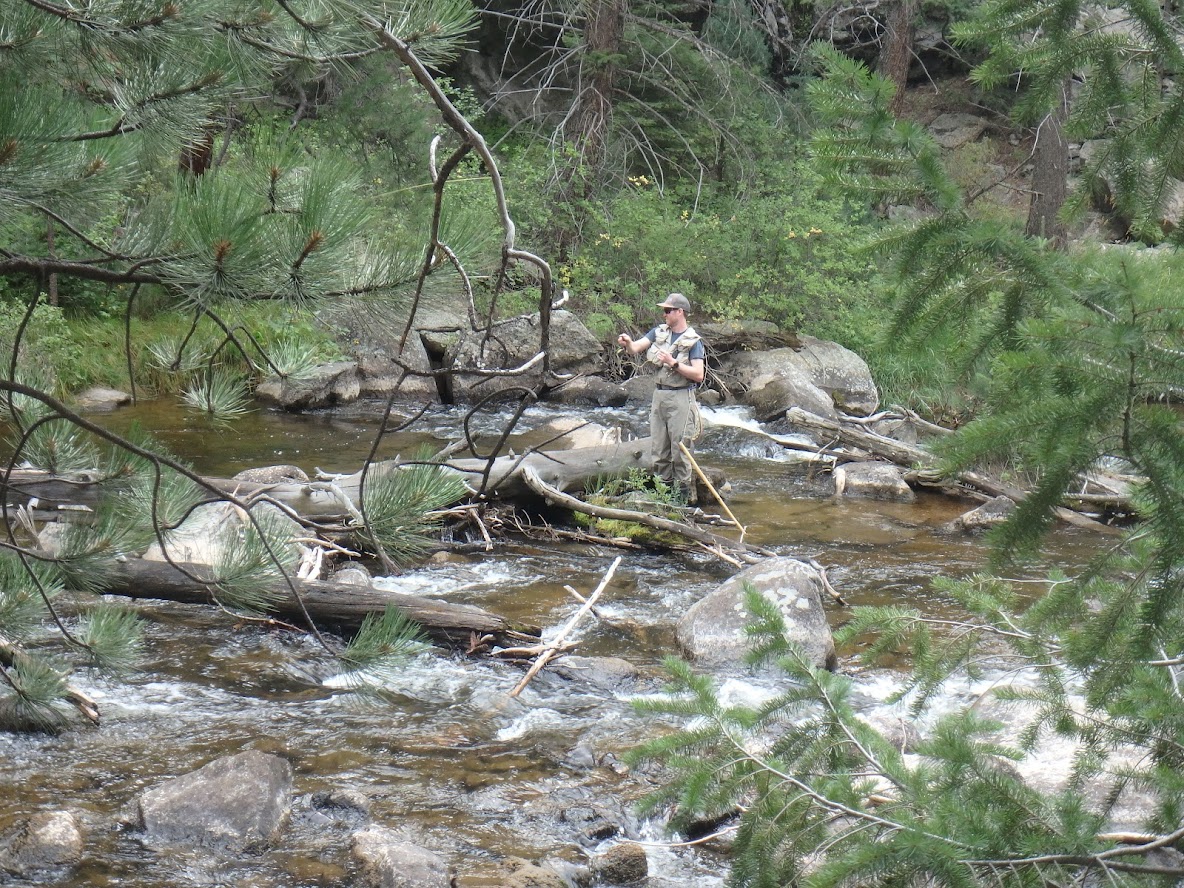 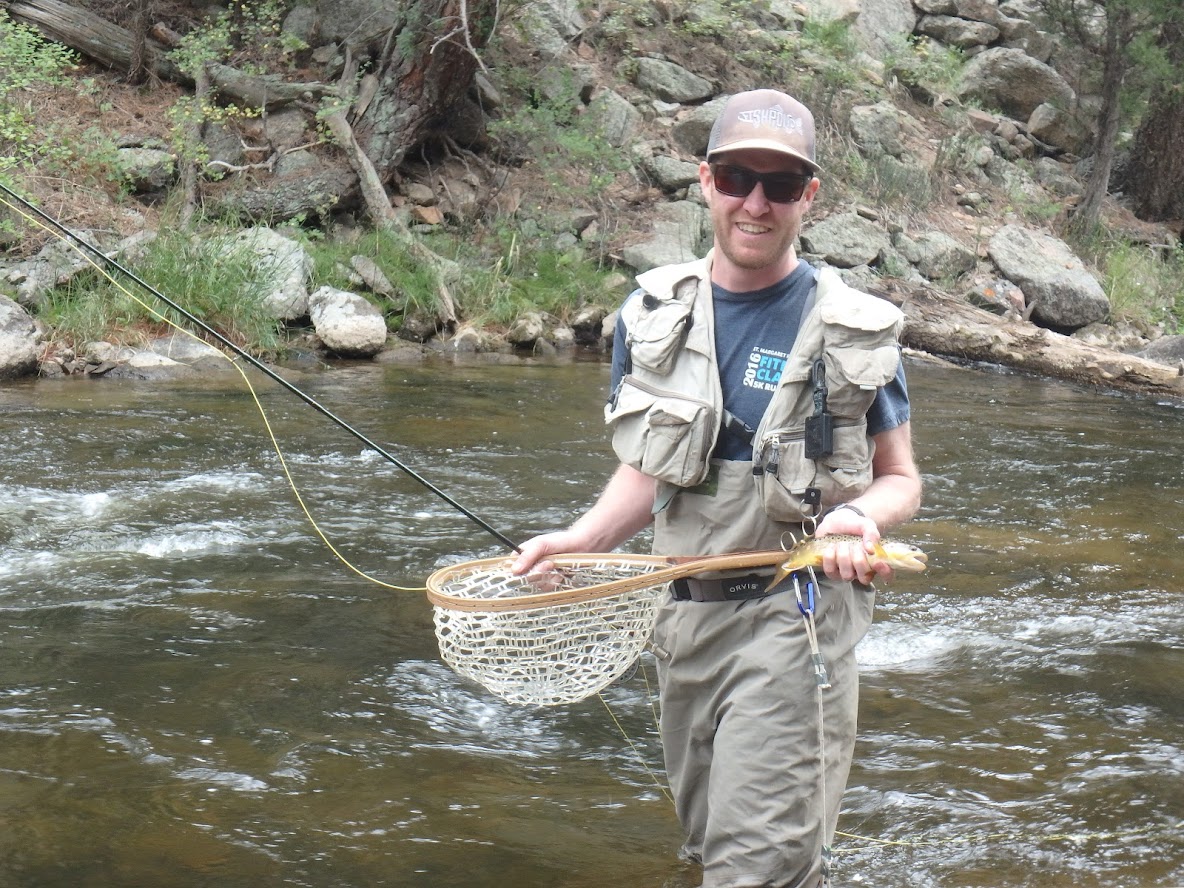 I was disappointed in the performance of the green drake, and naturals were absent, so I reverted to the dry/dropper technique. Unlike the morning, however, I switched the pool toy to a peacock hippie stomper, and I substituted a hares ear for the prince nymph. I hedged my bets a bit with the peacock hippie stomper, as it is a reasonable approximation of a green drake. Only the width of the body and the peacock color represent a slight deviation from the user friendly green drakes, that I tied over the winter. 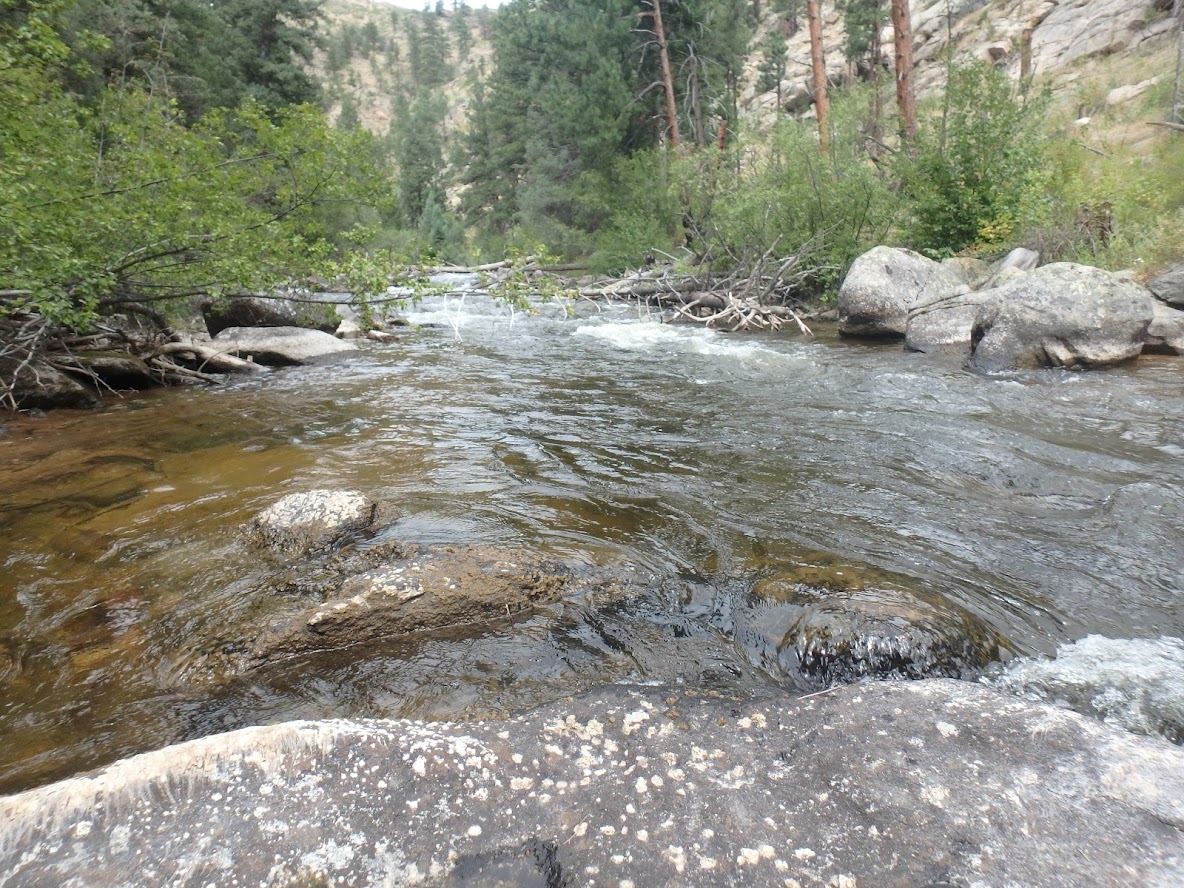 Salivating for a Shot at This Pool

Between 12:30PM and 3:00PM Dan and I migrated upstream, and we each enjoyed steady success. Most of Dan’s landed fish snatched the prince nymph, so perhaps my relegation of that fly to my fleece wallet was premature. I, on the other hand, incremented my fish count to twenty-five, and the hippie stomper and salvation nymph were equally effective. I was particularly pleased with several chunky twelve and thirteen inch rainbows, that slashed the stomper; but some deep butter-colored brown trout were also appreciated. 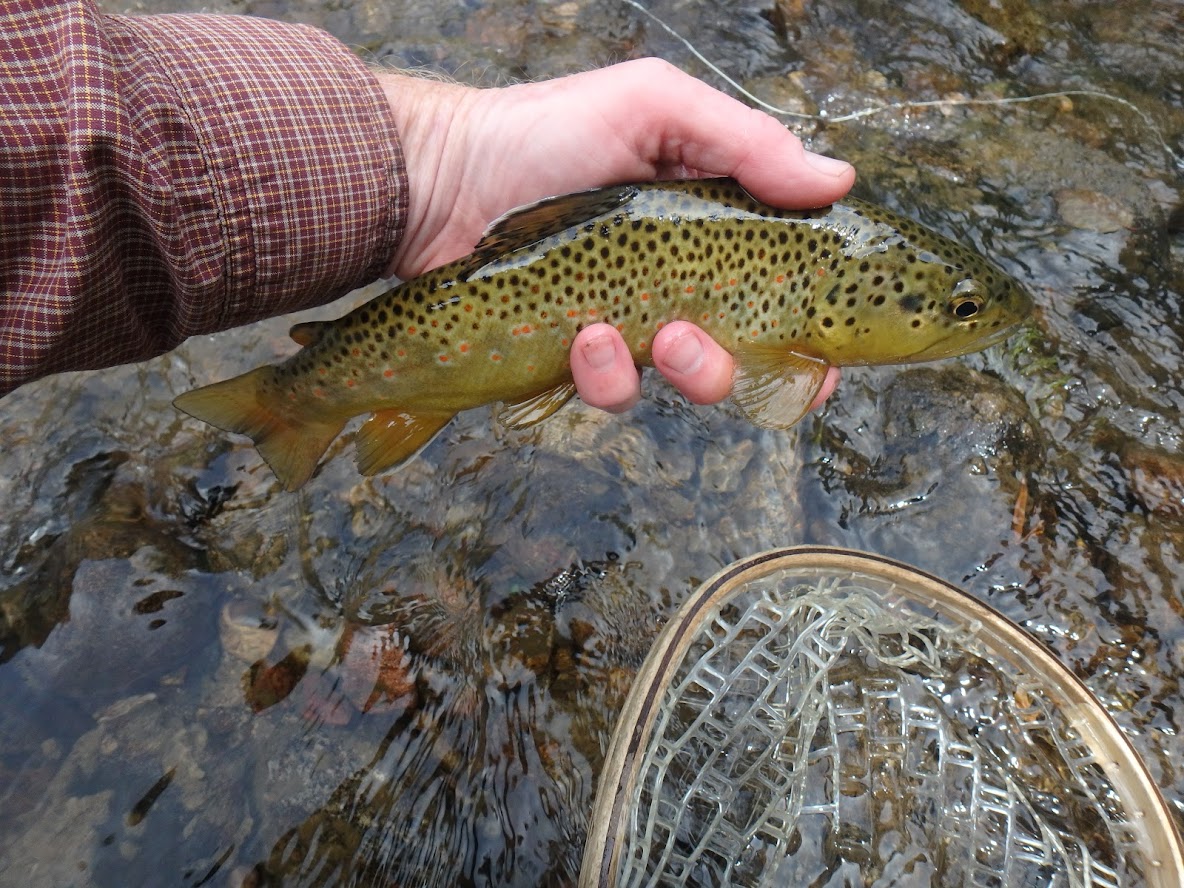 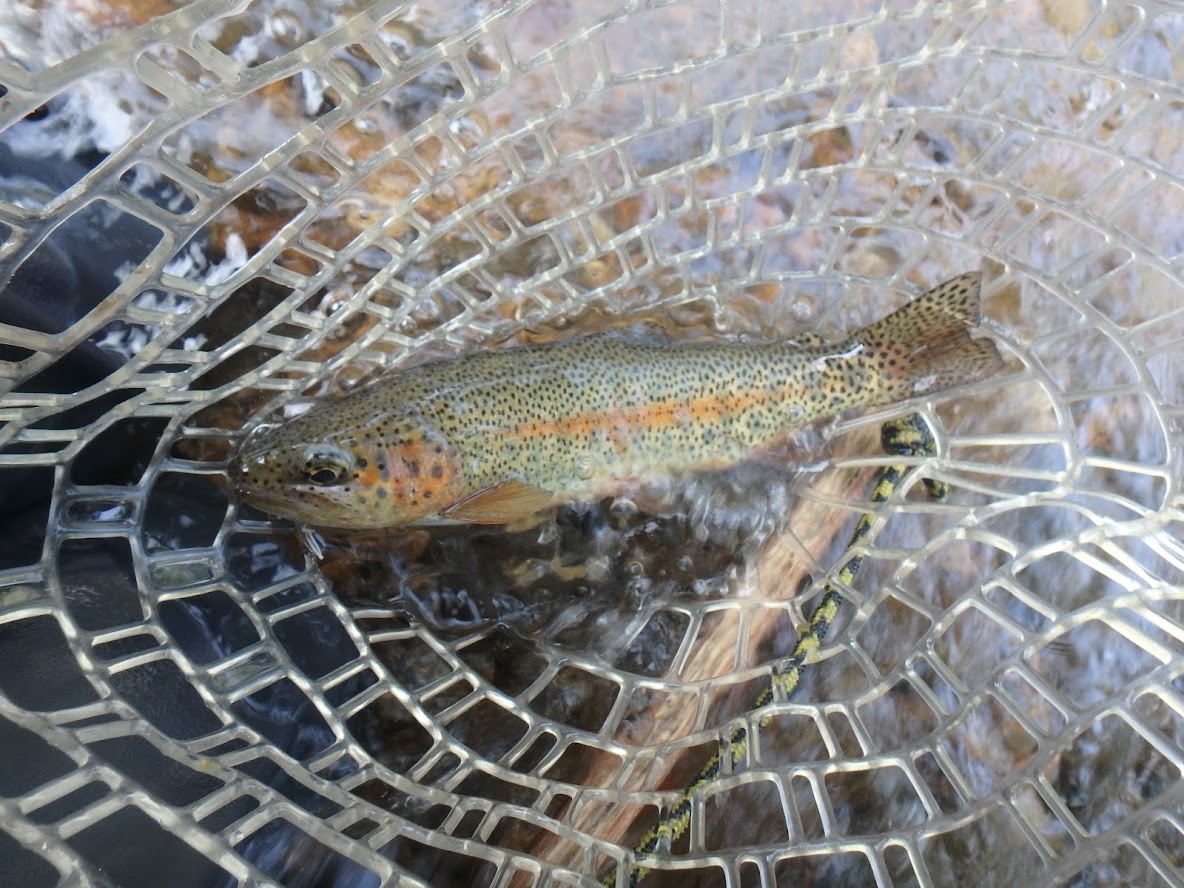 By three o’clock we approached an area where the creek narrowed between large boulders, and the character of the stream converted into deep pockets and large plunge pools. By now a few natural green drakes made an appearance, but we only noted a random rise or two. We decided to circle around the narrows, and we quickly moved upstream to a gorgeous pool. The main current divided the pool in half, and very attractive shelf pools beckoned our flies on each side. As I gazed upon the alluring pool in front of us, several lumbering olive mayflies elevated skyward, and this observation was accompanied by a burst of splashy rises along the main current seam as well as within the side pools. Needless to say our heart rates elevated, as this scene unfolded. Dan and I each began with parachute green drakes, but the fish continued to feed with no regard for our low riding slender imitations. 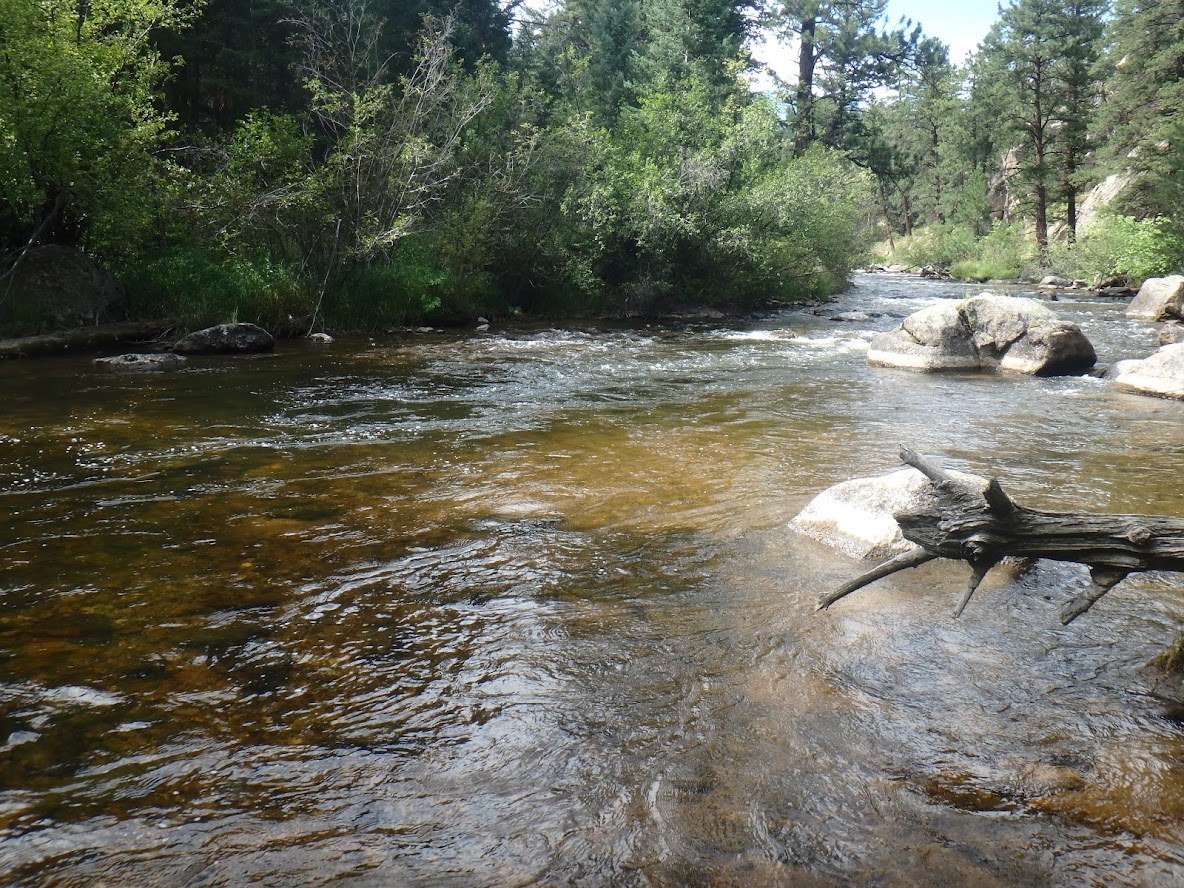 I decided to switch to a more robust green drake model and chose a size 14 comparadun with a maroon thread ribbing. This fly possesses a very full deer hair upright wing, and I speculated that it might be a key triggering characteristic. Once the comparadun was on my line and amply dabbed with floatant, I lobbed a cast to the shelf pool on the left. Thwack! A thirteen inch rainbow trout gulped it like candy. I was very pumped at this turn of events. I quickly sopped the moisture from the body of the comparadun, dipped it in dry shake and flicked off the white residue. My fly was back in floating condition, and I dropped a second cast to the left side of the main current seam. Wham! The second thirteen inch rainbow actually raised its head above the water and ate the fly on its way down. What a visual! I managed to guide another thrashing pink striped fighter into my net.

Dan was a keen observer of these developments, and he switched to a comparadun as quickly as he could. I ceded the left side of the stream to him and moved to the right. The right side contained a large exposed boulder, and a portion of the creek curled around the large rock and then flowed into a shallow pool, before it merged once again with the main channel. I focused on the trout in the shallow right pool section, but these fish were more educated or more than likely obtained a better look at my fly due to the slower and smoother water. 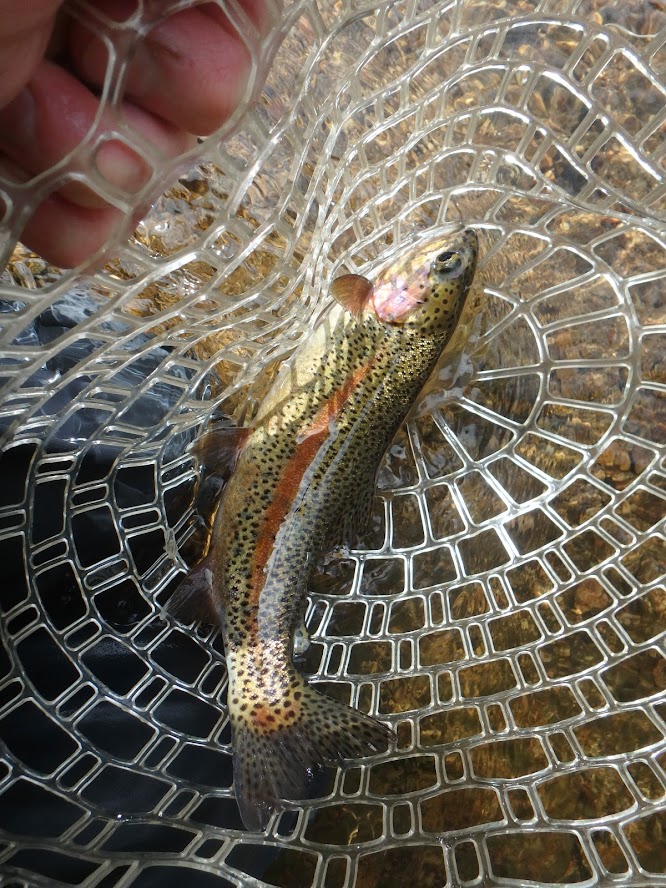 As I suffered through some ignominious refusals, Dan’s comparadun caught fire, and he landed a batch of eager feeders from the full length of the shelf pool on the left. I surrendered to the picky eaters in the shallow pool and turned my attention to the faster current to the right of the center run. This ploy paid off, and I landed two more trout to jump the fish count to twenty-nine. The rises ceased on my side of the stream, and Dan had more prime water to cover, so I waded to shore and circled around to two nice pockets above the main pool. In these locations I was able to net two additional trout, while Dan concluded his assault of the left shelf pool. By 4:15PM we encountered less attractive water, and we realized that time rushed by, so we resumed our return hike to the car. 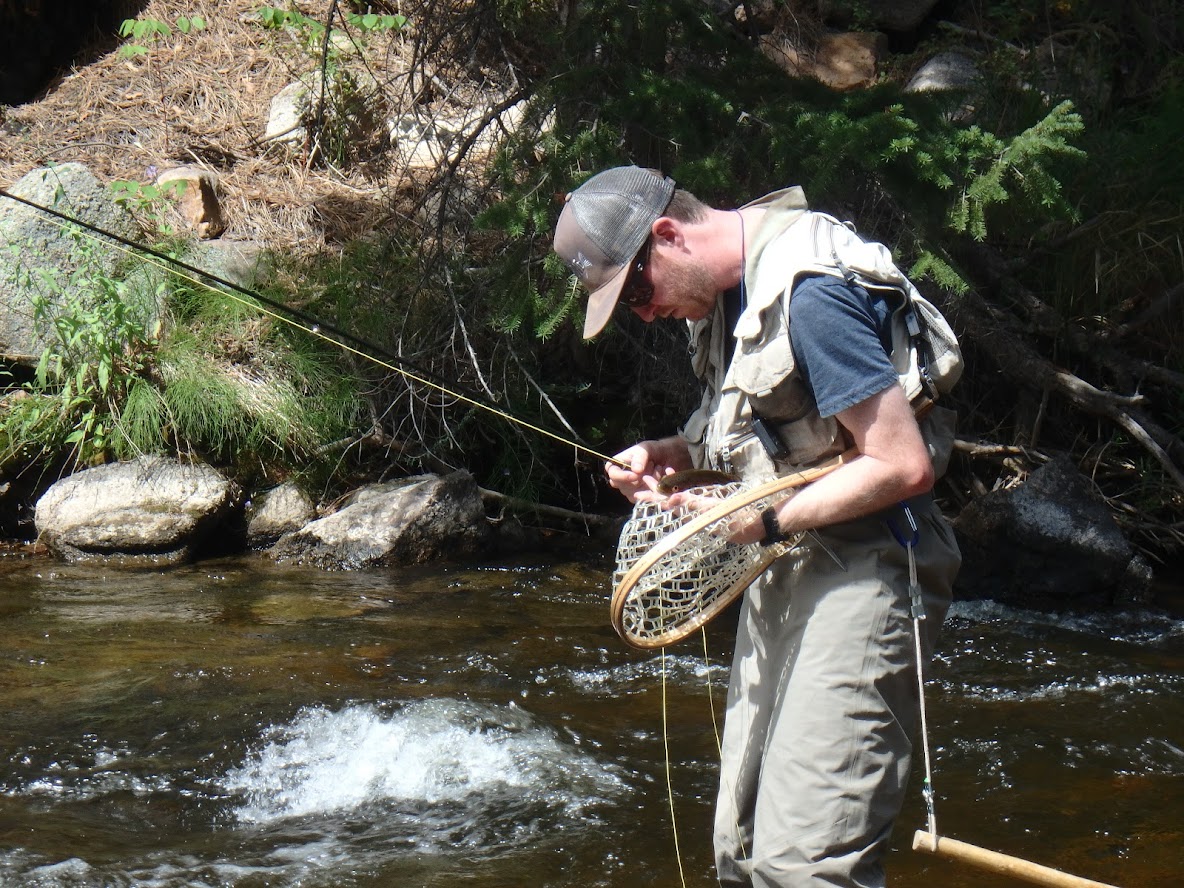 Wow, what a flurry of action at the main pool between 3:15PM and 4:15PM! This was exactly the scenario that I hoped for but never dared to expect. Dan experienced the excitement of casting large mayfly imitations to ravenously feeding fish, and he loved it. It is hard to adequately describe the intensity and adrenaline rush that accompanies a scene headlined by large hatching insects, eagerly feeding trout, and an angler with the correct imitation. In my mind it is the zenith of fly fishing, and the scenario that keeps bringing me back.