Green drakes and South Boulder Creek were on my mind, as I planned another day trip for Thursday, August 15. I searched this blog using the key words, “south boulder creek green drakes August”, and I quickly found my post for August 9, 2018, and sure enough green drakes emerged with relative regularity between 3PM and 5PM on that date. During 2019 South Boulder Creek was steadily flowing in the 150 – 166 CFS range for most of July and August, and this level was higher than I prefer, but I reasoned that a green drake hatch would prompt the stream residents to move to the surface for their meal. I could not resist the urge to fish to the large western mayflies and decided to give South Boulder Creek a try at higher than preferred flows.

I got off to a reasonably early start, and after pulling on my waders and assembling my Sage four weight, I hit the trail at a steady pace, and I was able to arrive at the streamside by 10AM. Thursday was a warm summer day with clear blue skies throughout and very little cloud cover. I suspect the air temperature peaked in the low eighties, but I was immune to the heat, and in fact had to exit the stream several times to allow my frozen feet to thaw. 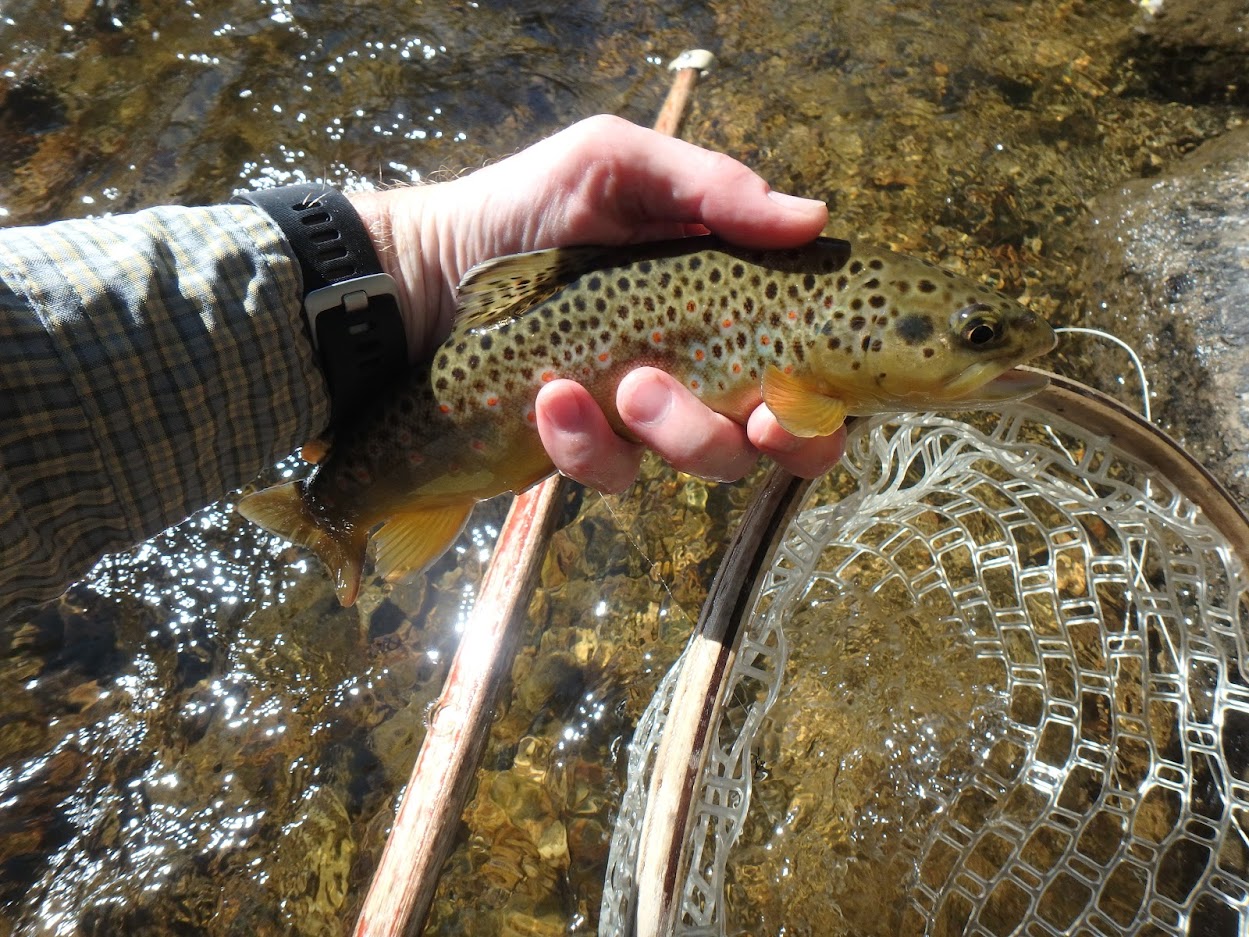 I began my fly fishing exercise with a yellow fat Albert, size 12 prince nymph, and salvation nymph. I reasoned that the prince nymph was a close approximation of the green drake nymph, and the salvation imitated the nymph of pale morning duns. I was hopeful that these two mayfly species were active in the bottom release waters of South Boulder Creek.

Whether my theory was correct or not remains unknown, but I landed fifteen trout between ten o’clock and noon, and 75% grabbed the prince, while the remainder nabbed the salvation. I had an enjoyable two hours of solid action, as I popped the dry/dropper configuration to all the likely spots. Runs and pockets of moderate depth were the most productive; however, some very respectable brown trout emerged from some fairly shallow riffles. I am always amazed by the brown trouts’ ability to camouflage in these situations. 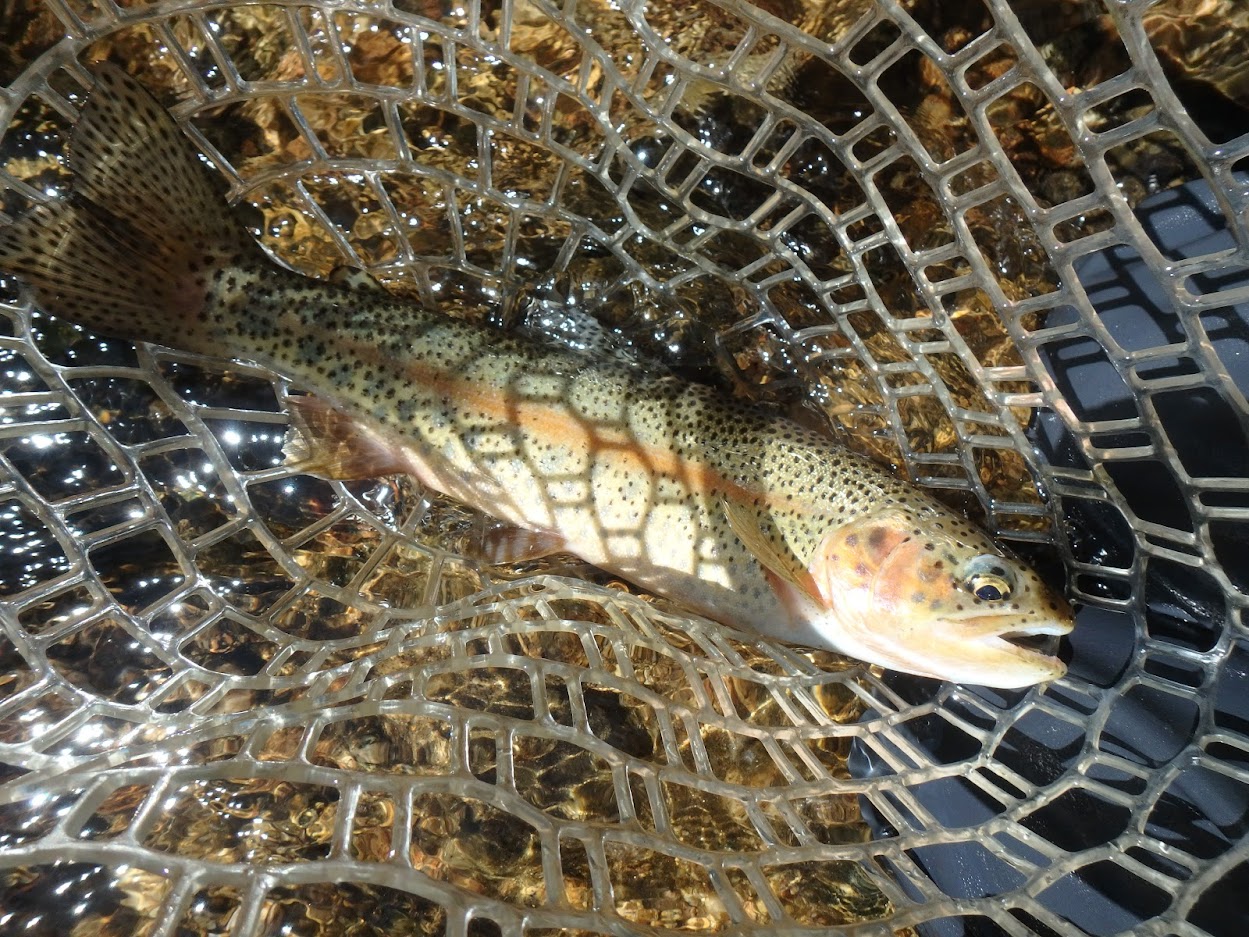 I casually consumed my light lunch and pondered my next move. I spotted very little insect activity besides some tiny midges during the morning hours, and I wondered if the green drakes had made their seasonal appearance. I decided to experiment with one. I could always return to the dry/dropper should my test prove premature. I began with a size 14 2XL parachute green drake with a white turkey flat wing. I tied some of these over the winter and used the turkey instead of white poly to take advantage of the lighter weight. 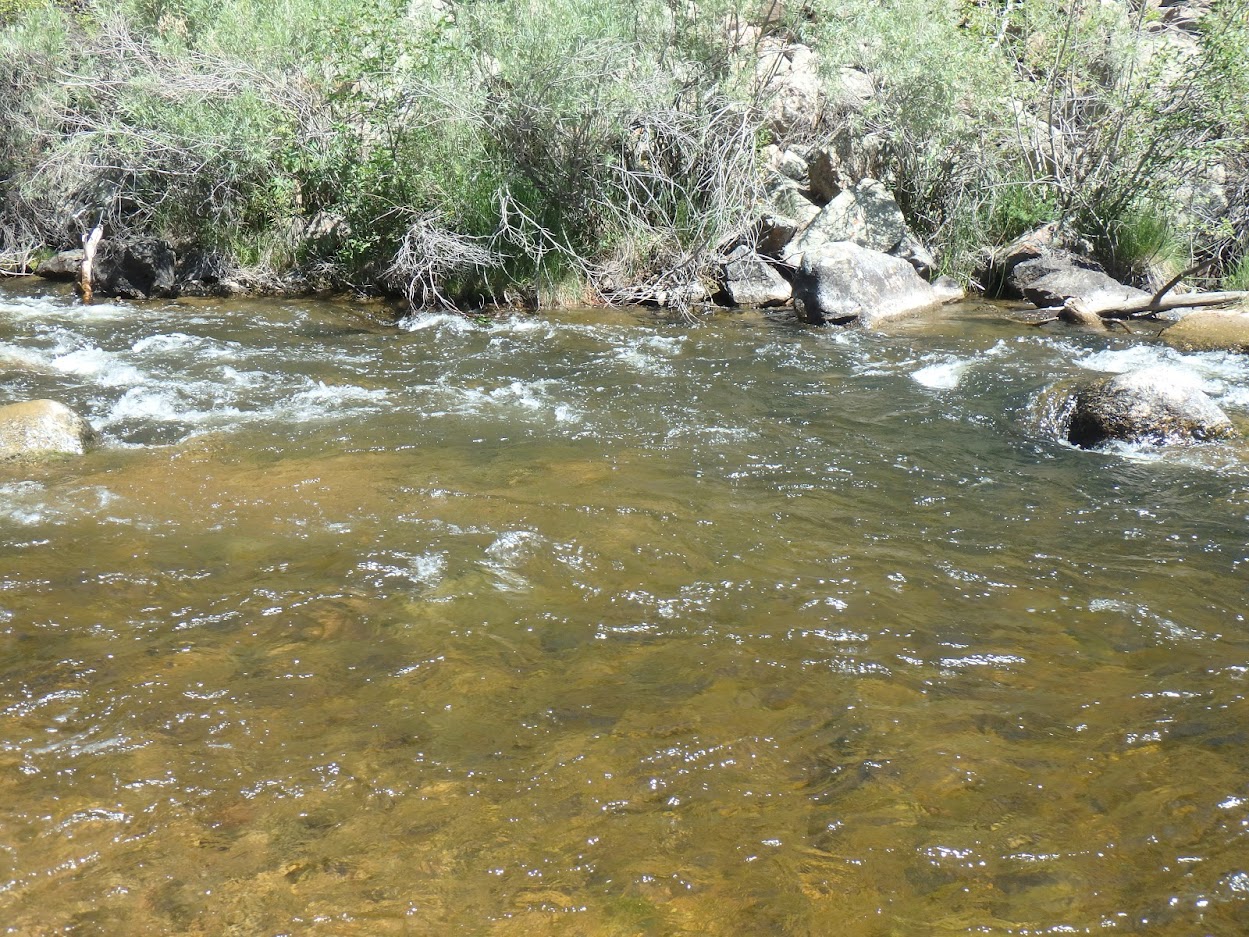 My bold decision proved to be a winner. After a refusal on the first cast, the other stream residents inhaled the low floating drake with confidence. Between 12:15 and 4:00PM the fish counter soared from fifteen to forty. I frankly could not believe my good fortune. All twenty-five of the afternoon fish except for one gulped a green drake imitation, but the parachute version was not the only style used. It was the most popular, as fifteen were fooled by it, but six craved the user friendly version, and three mauled a comparadun. One aberrant trout slammed a size 14 yellow stimulator. 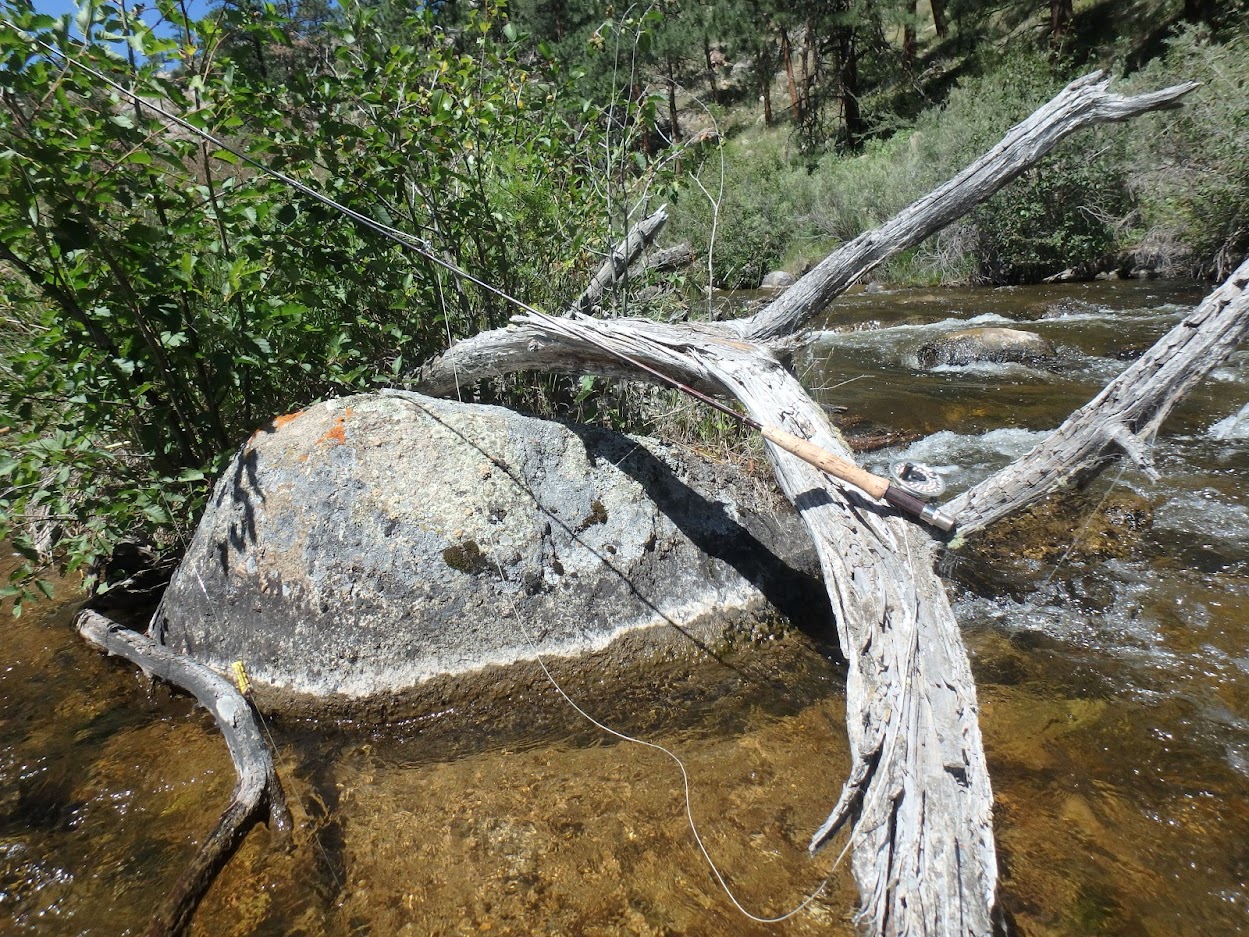 Convenient Rod Holder While I Release a Fish

By 2:30PM I began to observe quite a few golden stoneflies and yellow sallies, and I switched briefly to a size 14 yellow stimulator. One small brown trout crushed the heavily hackled dry fly to affirm my move, but then almost immediately I noted a flurry of rises. I placed casts of the stimulator in the vicinity of the rises, but it was totally ignored. In concert with the sudden surface feeding I noticed several large natural green drakes, as they fluttered up from the stream. A few pale morning duns also made an appearance to further confuse the situation. I concluded that the rises were attributable to the green drakes and returned to my dependable parachute style, but surprisingly the fish ignored it. How could this fly perform so well in the pre-hatch time period, and now prove ineffective? 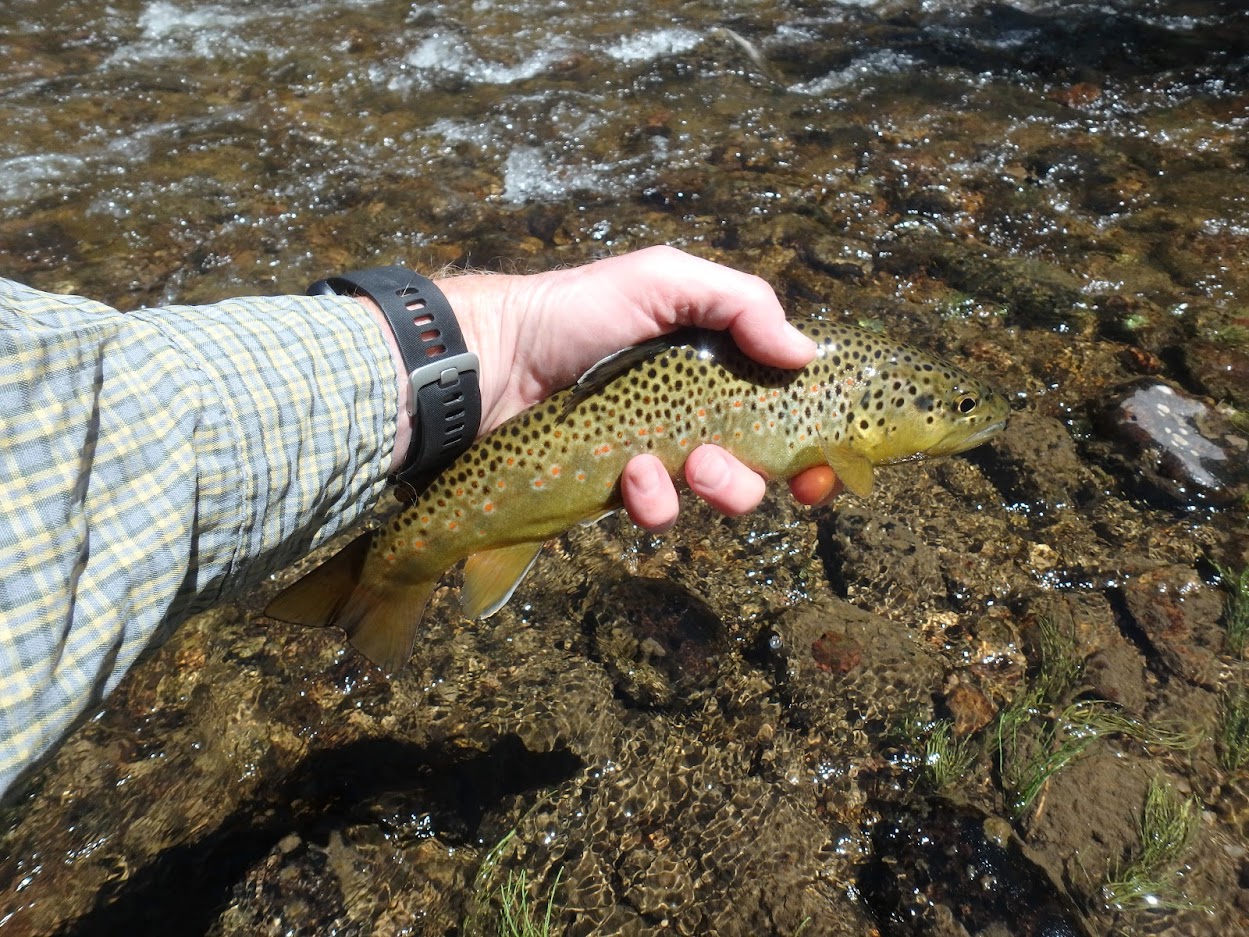 I quickly swapped the parachute for a user friendly, and this fly duped one, but it also was then treated like inert debris. I carry four different styles of green drake in my fly box, so I dug in and plucked a size fourteen comparadun with no ribbing and knotted this variation to my leader. Voila! Three nice trout crushed the low riding comparadun with a prominent wing, and I was pleased to temporarily solve the riddle. 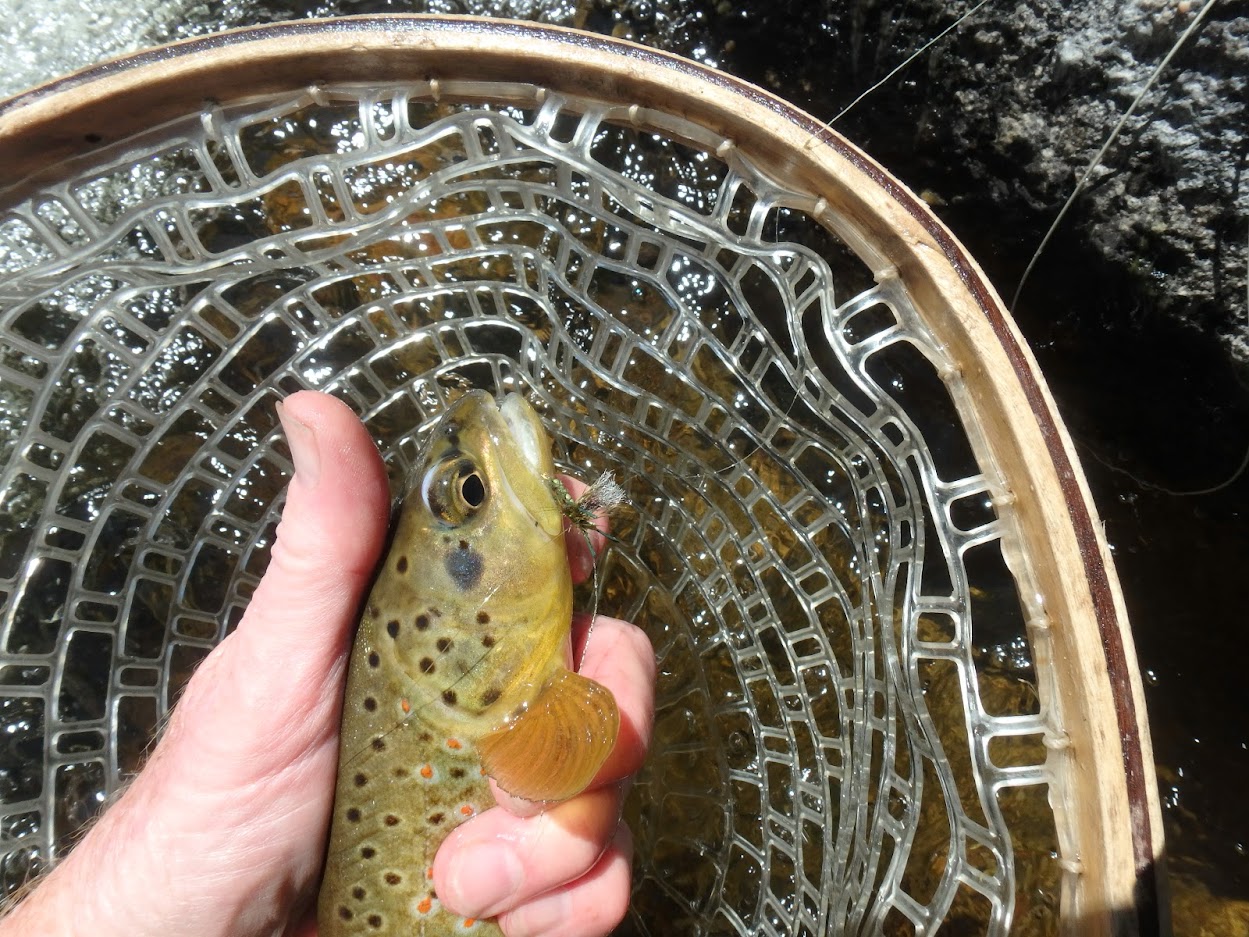 Zoomed on the User Friendly

Temporary was the key word, as the trout once again changed their preferences. I vacated the picky eaters and moved on. The comparadun body became waterlogged, and I reverted to the parachute style, and during my remaining time on the water, it served as my mainstay fly and enabled me to net a few additional trout to move the count to forty. 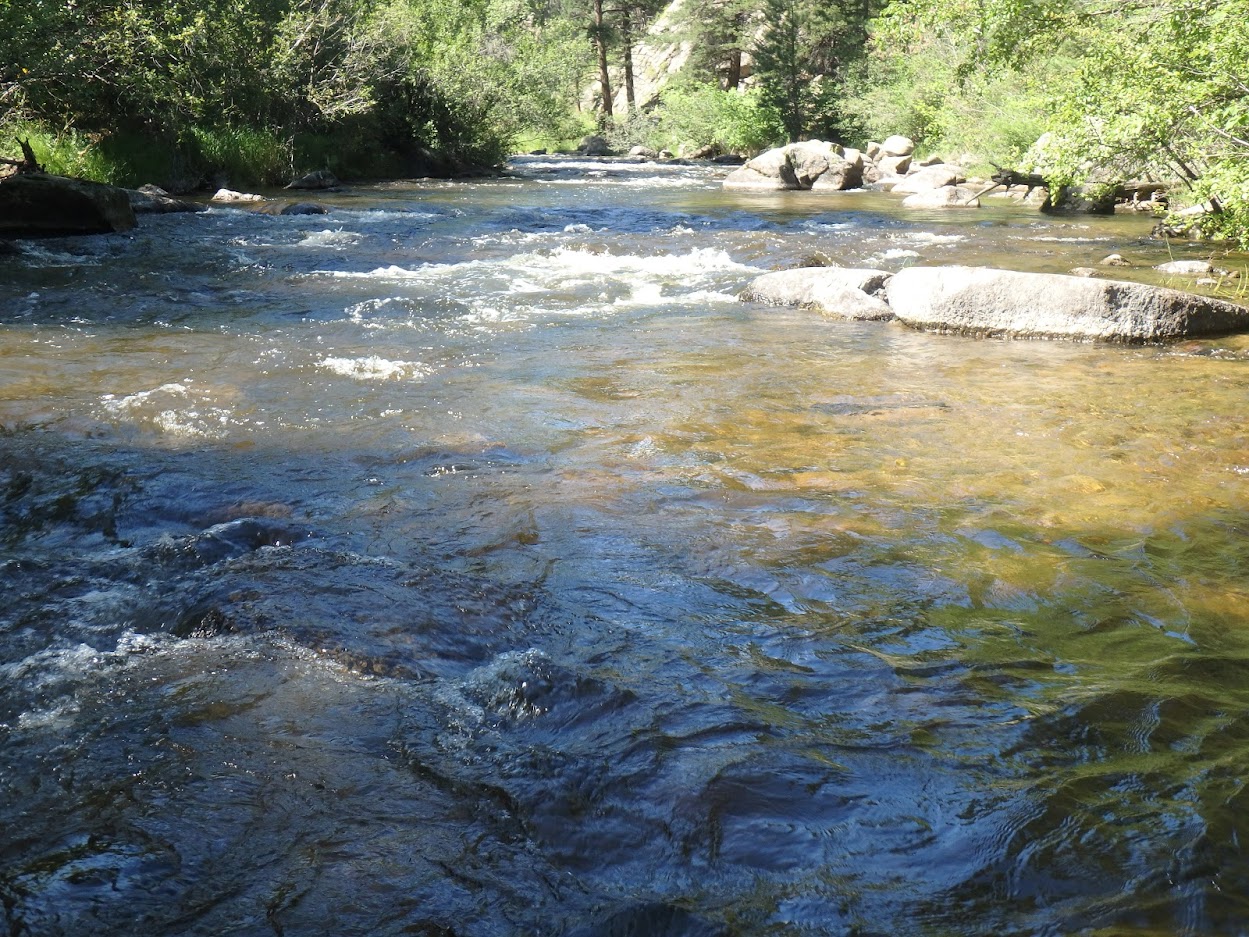 Thursday was a strong testament to the value of this blog, and more importantly to actually utilizing it to recall what was hatching and working at similar times of the season. I landed forty trout, and although many were in the six to nine inch size range, I also slid my net beneath a pair of thirteen inch rainbows and quite a few eleven to twelve inch brown trout. All the trout were extremely healthy, wild fish, and it was a pleasure to spray dry fly casts to the many prime spots and find willing takers. High stream flows are a secondary consideration, when strong hatches activate the appetites of the resident trout.