I was not satisfied with the performance of my green drake comparaduns during my last visit to the Frying Pan River and also on a recent outing on South Boulder Creek. I was able to get only a couple drifts until the fly began to sink and required sponging the moisture with my shirt and dipping in the drying powder. As I planned another trip to the Frying Pan River, I decided to do something about it.

I searched on line for green drake parachute fly and found a link to an Oregon fly shop with a video demonstrating the tying of a paradrake. I liked the style of fly and decided to make some prior to leaving for the Frying Pan on Thursday, September 13. The main feature I gained from the tying demonstration was how much thicker the moose mane tail was. The fly shop pattern used CDC as the wing and goose biots for the body and I didn’t care for these options so I adapted my own materials. 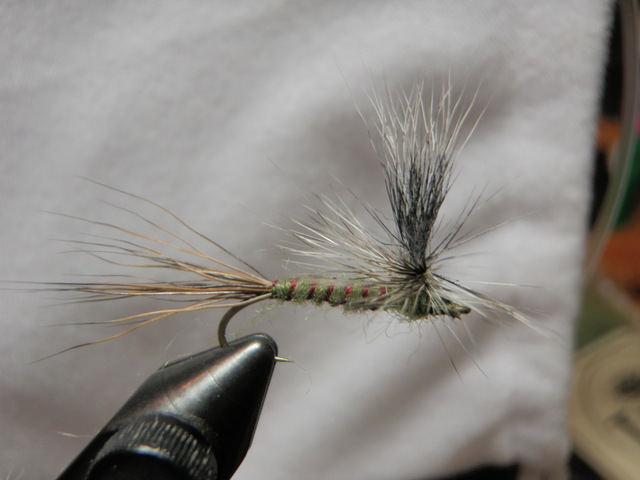 I stayed with the same Tiemco 200R size 12 3XL hook that I was using previously. I feel that this is the correct size other than for the smaller South Boulder Creek version, and I’ll address that later before I visit that stream again. I used olive thread and tied on a white calf tail wing. After I stood the wing up and created a thread base for wrapping the parachute hackle, I used a permanent black marker to color the bottom half of the wing. This resulted in a gray shade, but the top or tip of the wing remained white for better visibility. Hopefully this won’t turn off the fish. Picking up the drab olive/gray green drake is very difficult for my aging eyes. 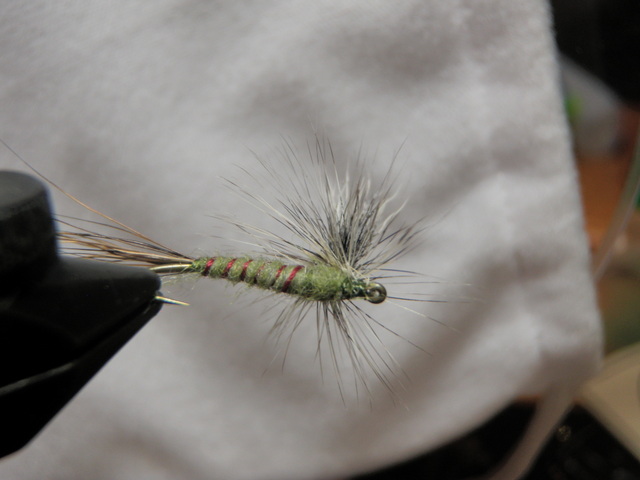 Next I moved to the tail and tied in five or six stacked moose mane fibers. I wrapped the thread up over the butt section of the moose mane almost to the base of the wing. I feel the hollow moose mane fibers will also add buoyancy. Next I returned to the base of the tail and tied in a section of maroon sewing thread for the rib. I dubbed the abdomen with the same light olive material that has proven itself on my comparaduns and then wrapped the ribbing to the base of the wing. Next I tied in a grizzly hackle concave side pointing down. The fly shop video used a grizzly hackle dyed olive, and if I had this material I would have used it. Hopefully my version isn’t a bit too light. I applied the same dubbing that I used for the abdomen to the thread and wrapped the thorax and then wrapped the hackle parachute style around the wing post.

I’m fairly certain this fly will improve over my comparaduns from a flotation perspective. I’m convinced the main features that are important to a trout from its underwater vantage point are the color of the underside of the body and the general size and silhouette of the fly. I think my version of the paradrake clicks on all these factors. Hopefully I’ll find out tomorrow how my paradrake performs on the upper Frying Pan River.