My history with the hippy stomper is well documented in my post of 01/13/2018. This report notes that I experienced a small degree of success during several fall outings in 2017, and these experiences convinced me to produce twenty-five in preparation for the 2018 season. This raises the obvious question, how did the hippy stomper perform during live field tests in 2018? 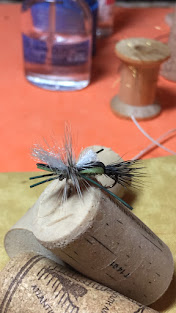 A size 12 peacock hippy stomper joined my stable of prime producers during the spring, summer and fall of the past year. As I suspected, it served as an effective option between the larger foam attractors such as the fat Albert and Chernobyl ant and the smaller Jake’s gulp beetle. The hippy stomper became my first fallback choice when finicky trout rejected the size 8 and 10 terrestrials on my dry/dropper presentations. Although the hippy stomper contains thinner foam and offers a smaller surface area than the larger foam flies, it possesses adequate buoyancy to support two size 14 beadhead nymphs. Jake’s gulp beetle struggles to support two medium size nymphs, and this capability is important, as I love the three fly dry/dropper approach. I believe that the weight of two beadheads places the nymphs within the feeding range of the trout on a more consistent basis. 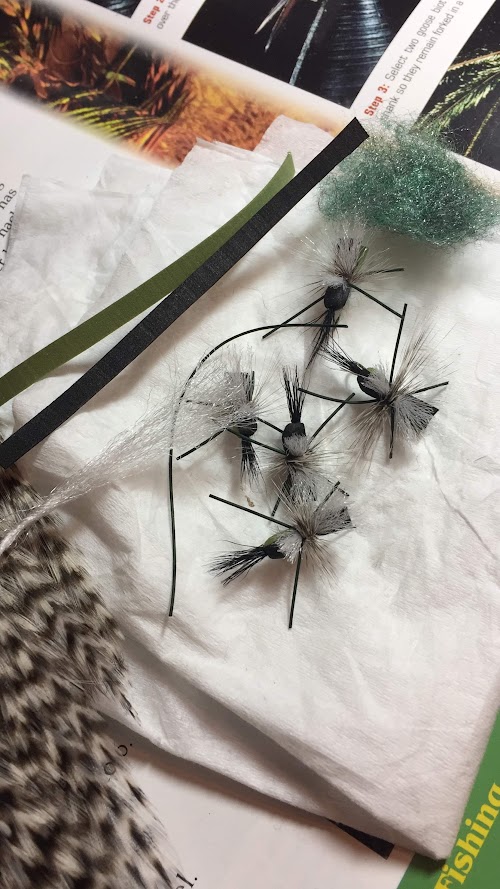 A Batch of Five and Materials

Since my experience with the hippy stomper was minimal, I tied ten with red bodies, ten with peacock bodies and five with silver ice dub bodies last winter. I speculated on effective body colors based on a few successes in the fall time period. During 2018 I deployed the hippy stomper throughout the season, and I learned that the peacock body versions outpaced the others in terms of desirability to the wild trout. This translated to peacocks spending significantly more time on my line, and of course this resulted in the loss of peacock body flies in the heat of battle.

In fact, I used my last hippy stomper during an October trip, and this required an in-season visit to my fly tying station. I generally try to avoid this circumstance, but the hippy stomper secured the status of required in my fly fishing arsenal. During the first in-season tying session I manufactured eleven using peacock dubbing, and these were immediately assigned active status. Once the weather cooled down at the end of October, my fishing outings became infrequent, and I added fourteen additional models to my storage container to reach a beginning inventory of twenty-five. I suspect the hippy stomper will continue to excel as the surface fly in a dry/dropper rig while serving as a superb fish attractor in solo dry fly mode. 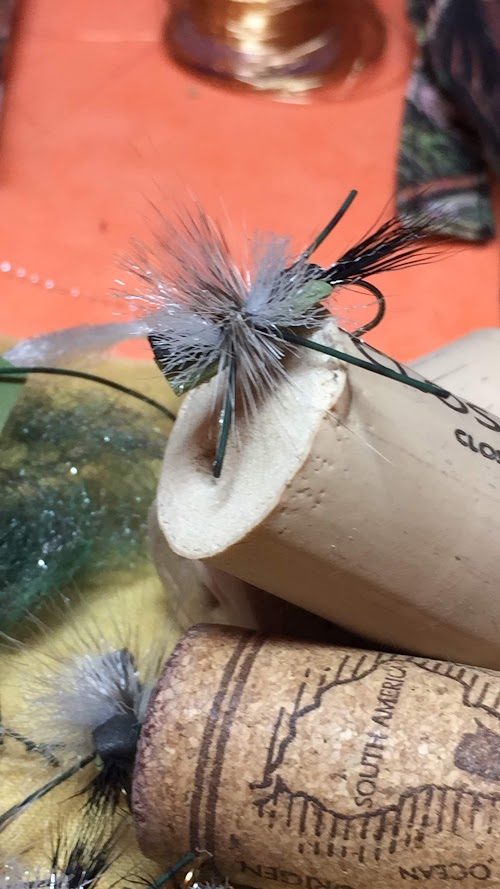 One of 25 Hippy Stompers

I settled on the Anglers All tying demonstration on YouTube for my guidance on tying hippy stompers. I also discovered that Andrew Grillos is the designer of this relatively new fly, and I was already an enthusiastic adopter of his pool toy hopper pattern. I am very anxious to continue the hippy stomper experiment in 2019.