The western green drake hatch has been a roller coaster ride for this avid fisherman. I’ve encountered them on the Big Thompson River, St. Vrain Creek, Roaring River, Clear Creek and South Boulder Creek along the front range in the state of Colorado. One year not long after I moved to Colorado I chanced upon a decent hatch on the Fraser River near Tabernash. In the south central part of the state I was fortunate to meet large green drakes on the upper Conejos River one July. These fish were not the least bit picky, and they smashed my large bushy green drakes with reckless abandon.

Moving west my best green drake experiences have been on the Taylor River and Frying Pan River. I remember one fine day on the Eagle River when I spotted one or two in the air during my lunch break, and I then switched to a green drake imitation and enjoyed a great afternoon attracting fish to the surface.

The most dependable source of green drake activity remains the Frying Pan River. Nearly every afternoon that I visited this reliable tailwater after mid-July resulted in some level of green drake emergence, and this continues into October. I have enjoyed spectacular days when the feisty residents relished my flies like no other, but I have also had days of frustration when large dark olive mayflies blanket the river, and yet my various offerings went ignored. This is the roller coaster ride that I alluded to at the beginning.

The worst scenario is when I have a very successful outing on my last trip to the Frying Pan, and this leads me to believe I solved the puzzle. I make a note of the type of fly that produced success, and when I sit down at my vice during the winter, I churn out five to ten specimens with the misplaced notion that these flies will yield many more days of double digit fish counts. Typically when I return to the Pan and tie on my fresh killer pattern, I experience disappointment. This cycle repeats itself from season to season. Last winter I did some online research and discovered there are two if not three species of western green drakes on the Frying Pan River. 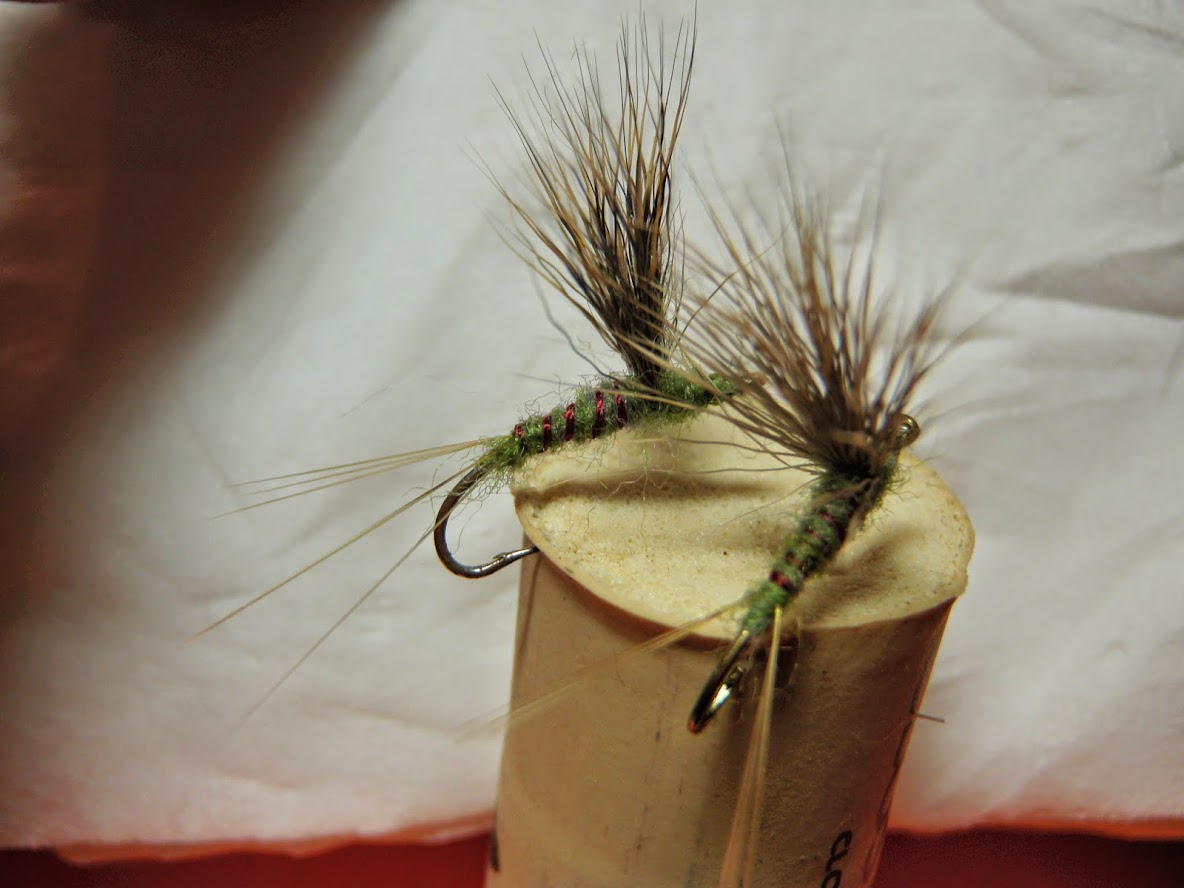 According to my findings, the early green drake is larger in size and darker in color, and a later species is a hook size smaller and possesses a lighter olive body color. Armed with this information, I tied some size 14 comparaduns with a lighter olive body. On my trips to the Frying Pan in 2014 I met with mixed success. During two memorable days I had decent success in the early stages of the hatch, but once the density of adult flies peaked, the fish ignored my offering. 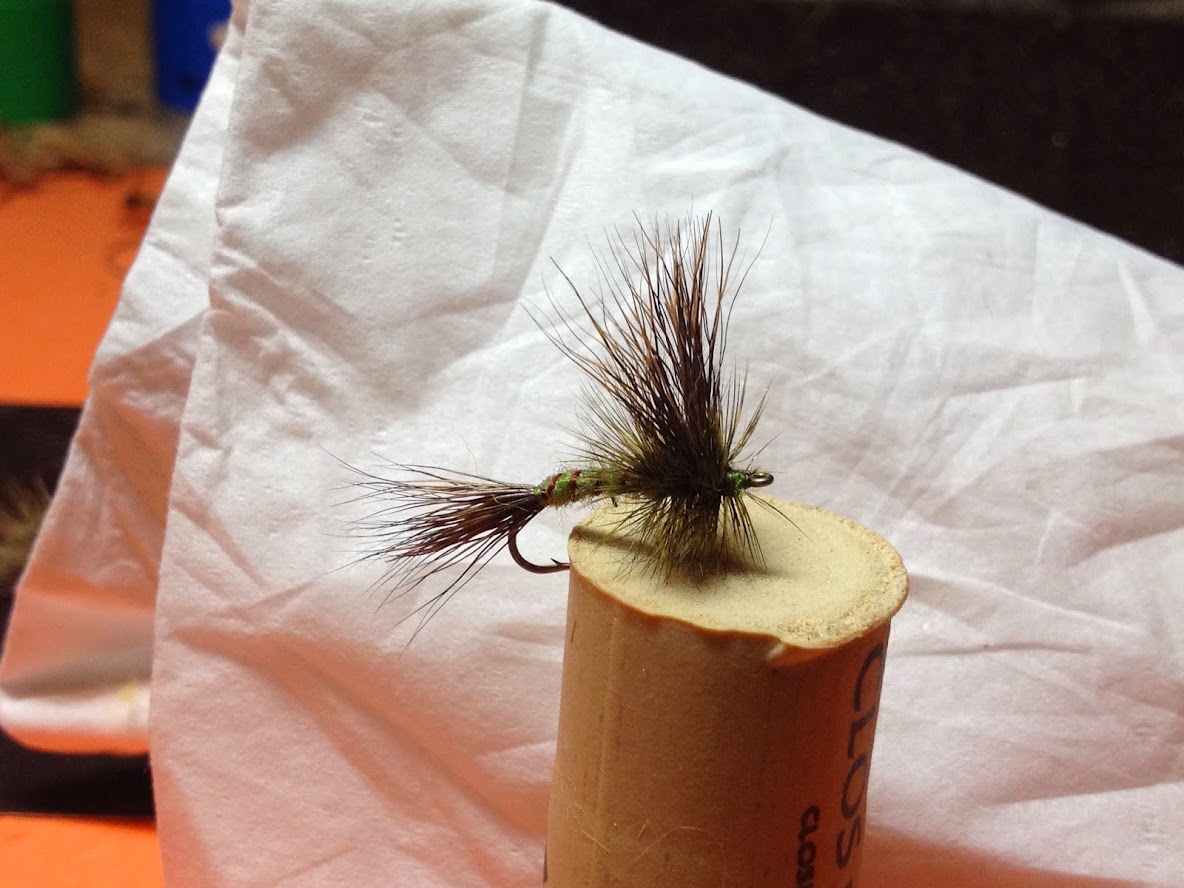 So what is a fly fisherman and fly tier supposed to do? I’ve reached a point where I tie three different styles of fly in two sizes with two types of abdomen. The three styles are a bushy version that is a heavily hackled Catskill style. This fly is quite buoyant, rides high on the surface and seems to work well when the emerging green drakes create a frenzied commotion as they try to become airborne. I usually tie these flies with a fairly dark olive dubbing and rib with a maroon section of thread. I make these flies mostly in size 12 with a few size 14’s to cover my bases.

The second style is a parachute green drake, and I tie these in both size 12 and 14. These flies have a moose mane tail and white calf tail wing post that I color black, but I keep the tip white for visibility. I wind a dyed olive grizzly parachute hackle around the wing post, and the body is the same color as I described previously for the Catskill style. These flies float quite well and are very visible, and they seem to work quite well early in the hatch. In the two hour period before the expected hatch time I like to prospect with the paradrake because it is quite visible in fast riffles and pockets. If green drakes are present, the fish will generally hammer a paradrake opportunistically. The final style that I carry in my fly box is a comparadun. I’ve had some superb days with the comparadun style, but mostly the smaller size 14 3XL version. I make these flies with a splayed microfibbet tail, and I use three fibers on each side. These stiff tailing materials serve as outriggers to keep the large comparadun afloat. I tie some comparaduns with a very dark wing of coastal deer hair, but I also arm myself with several that utilize a lighter charcoal coastal deer hair wing. For the body I make some with the medium olive/maroon ribbed combination, and then I supplement these with a sampling with olive antron yarn and no rib. Several of my best days developed when I tied the antron yarn size 14 comparadun to my hook. 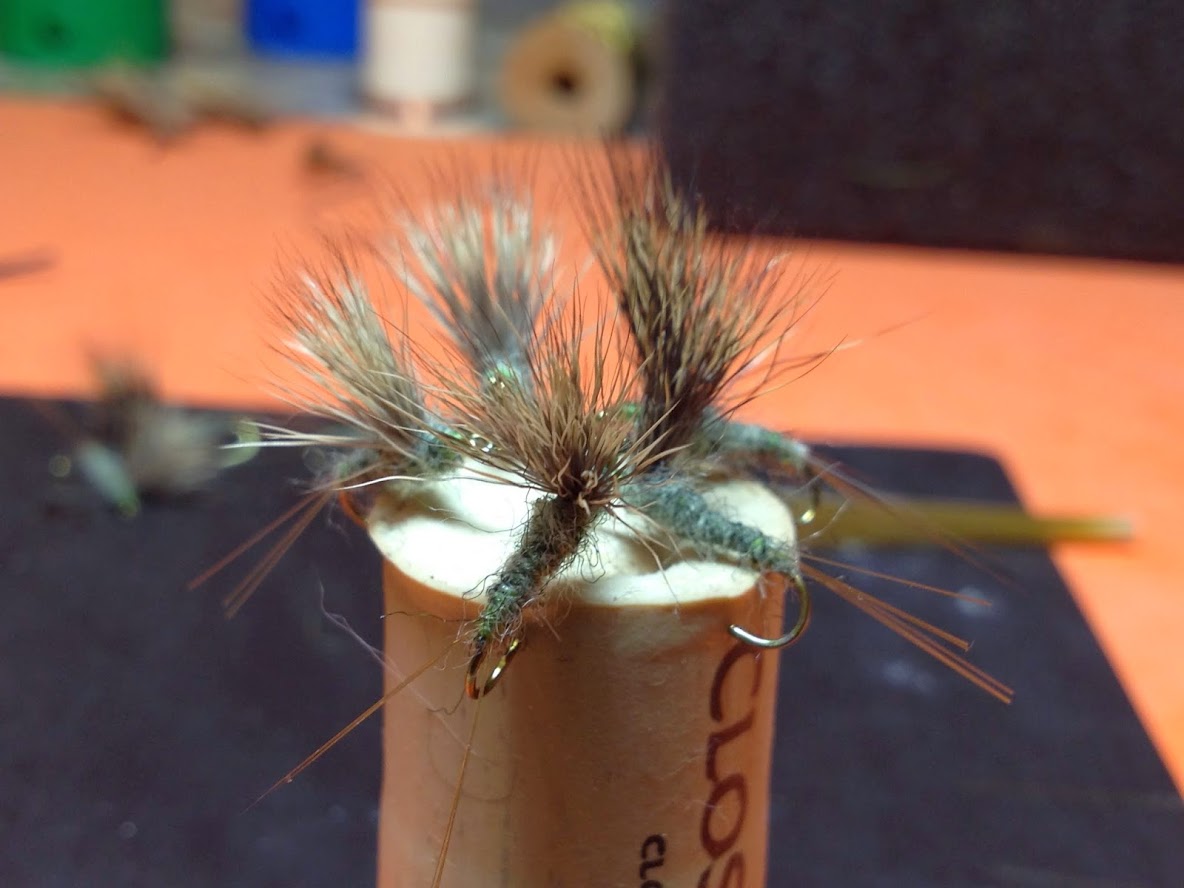 Green Drake Comparaduns with Antron and No Rib

I am sure the reader’s head is spinning my now, but at least you understand the complex nature of finding success on the Frying Pan River during a western green drake hatch. Of course I have not even mentioned the simultaneous hatch of red quills, pale morning duns and blue wing olives. What are the chances of selecting the correct fly during these frenzied feeding orgies on the Frying Pan River? It is fun to continue attempt to solve the puzzle, so I have tied a bunch of the above versions, and I anxiously await the opportunity to continue the experiment in the outdoor lab.