I can remember numerous frustrating outings on the South Platte River during fairly dense blue wing olive hatches when I was unable to catch a single fish. At the time I was probably using a parachute adams or a small comparadun. The comparadun served me well in larger sizes, but it was next to impossible to produce a size 20 or smaller imitation with a slender body due to the density of the deer hair wing.

This frustration caused me to evaluate other wing materials, and when I read about CDC and its water repellent qualities, I decided to try using it as a replacement for deer hair. CDC is very light and compresses well at the tie in point to enable a slender body, yet it looks fluffy and bulkier when dry for a visible wing. In addition its water repellent qualities allow it to help float the body of the fly, and the sihouette of the fly remains in line with the comparadun style. 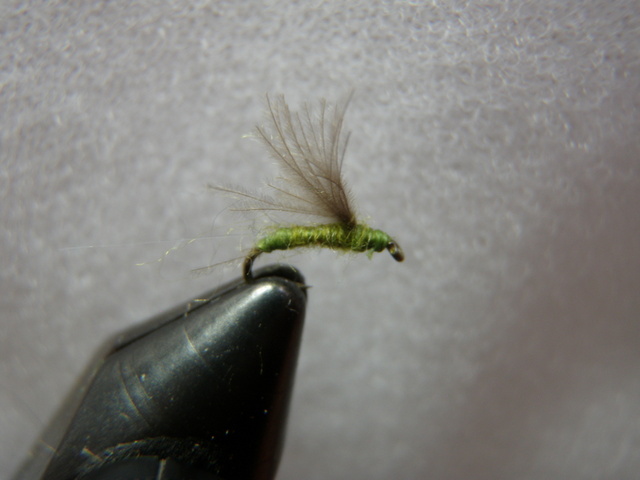 I tied some one winter, and the first memorable success with these flies occurred on the Williams Fork tailwater above its junction with the Colorado River. A friend and I chanced upon a very dense blue wing olive hatch during August late in the afternoon, and I pulled a CDC olive from my fly box and tied it to my 5X tippet. This fly produced some sensational results over a two hour period in a large pool on the Williams Fork, and ever since then it has become a mainstay in my flybox. My partner during this outing was using a parachute style BWO, and his results did not come close to the success that I enjoyed. I’ve enjoyed numerous additional successful experiences using the CDC olive during intense BWO hatches on the Frying Pan River, Colorado River, South Platte River, Arkansas River and Big Thompson River.

The only downside to the CDC blue wing olive is the difficulty encountered in refreshing the wing after catching a fish. Once the CDC wing gets wet it has a limp narrow profile so I typically dip the fly in dry shake several times, blow on it, and continually fluff it with my finger until it gets back to a reasonable wing appearance. If it is raining as is often the case during a strong BWO hatch, the task of drying the wing becomes even more problematic. I put up with this extra effort and the extended fluff time because the fly is so effective. 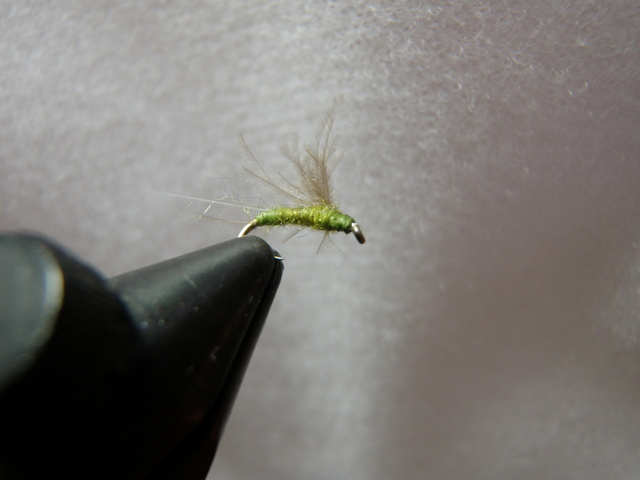 I’ve recently considered substituting snowshow rabbit foot hair for the CDC in a comparadun style BWO imitation. Now that I’ve worked with snowshoe rabbit hair in the muggly caddis, I recognize that it might be a nice compromise between deer hair and CDC in terms of being lighter and able to compress to minimize body bulk, while at the same time presenting a stiffer wing that can be dried faster after being submerged.

For now I tied 10-15 additional CDC blue wing olives in two different shades of light olive for the upcoming season. One olive carries a more yellowish hue, while the other is more green on the color scale. Hopefully I’ll experience some strong BWO hatches soon on the Arkansas River so I can verify the effectiveness of my recent tying efforts, and maybe I can find some time at the vice to make a few snowshoe olive prototypes to test.