After several days visiting our friends the Gaboury’s in Eagle Ranch with limited fishing options, Jane and I spent a hot weekend in Denver. I am proud to announce, however, that I placed first in my age group in the Sand Creek 10K. The downside to this accomplishment was the onset of a very sore heel, and I decided to take a break from running for a couple weeks, while I waited for new shoes to arrive.

The readers of this blog can probably predict the outcome of this near hiatus from fly fishing in July. I had a strong itch to cast a line in a moving river or stream. As in past seasons I eagerly tracked the declining flows on three large Colorado freestone rivers: the Arkansas River, the Eagle River and the Yampa River. I visited the Yampa on July 9 with reasonable success, and the DWR chart depicted steady declines with flows in the 700 – 750 likely for Monday, July 15. The Eagle River finally crashed beneath the 2000 CFS range, and the Arkansas River at Salida flattened out between 2200 and 2500. The top of my range for edge fishing the Eagle River is 1200 CFS and for the Arkansas 1500 CFS.

I planned to capture a couple days on the Yampa, while the flows remained elevated. I hoped that the flows on the Eagle or Arkansas would drop to the upper range of my edge fishing window by Wednesday, and I would move my camping gear to the new destination. 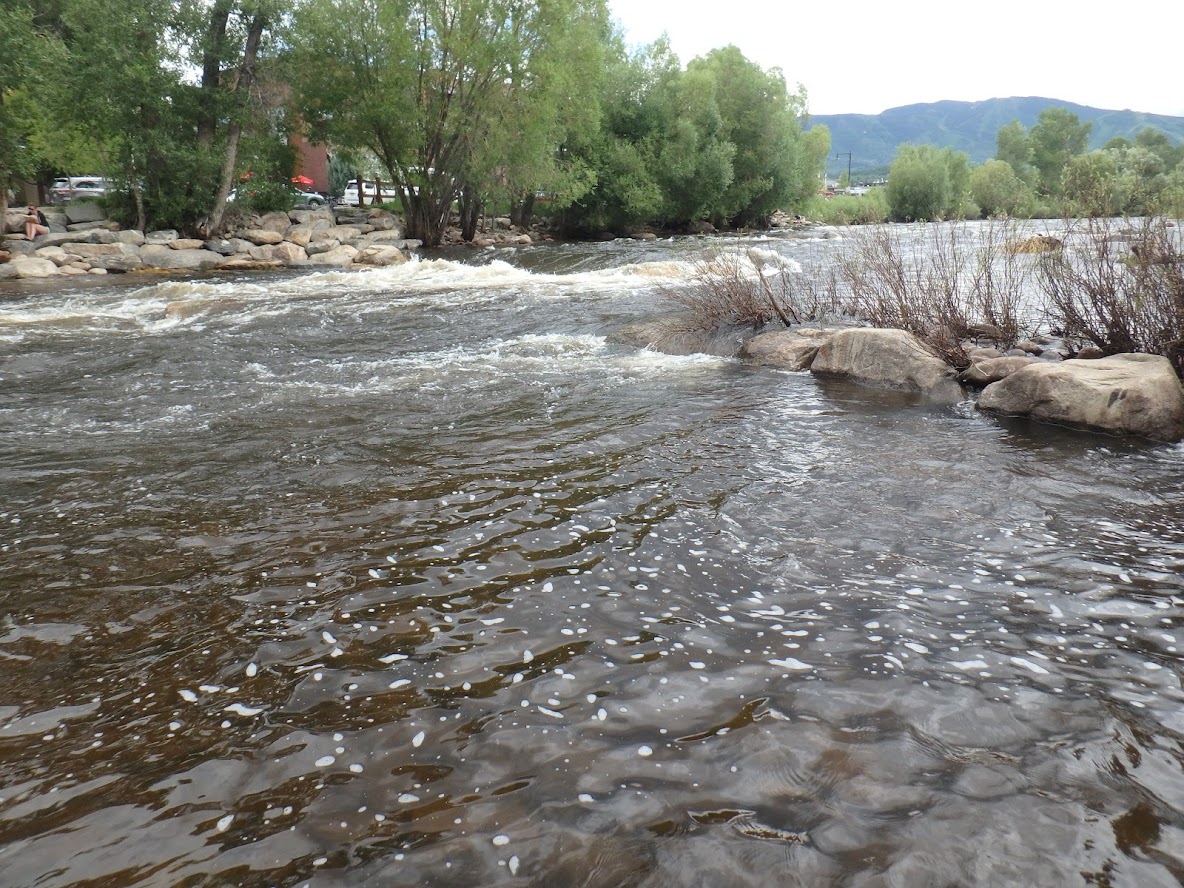 One of the Prime Spots at Elevated Flows

I departed Denver by 8:15 on Monday morning and arrived at the Howelsen Hill parking lot by 11AM. The sky was cloudy and overcast much of the day, and the temperature peaked in the low eighties. This development was a nice break from the nineties that blanketed the city of Denver. The flows, as suggested by the DWR graph, were in the 650 CFS range, and this allowed for much easier wading compared to the conditions I endured on July 9.

Once I pulled on my waders and assembled my Sage four weight, I hiked along the railroad tracks, until I reached the hot springs. The pungent smell of sulfur dried my throat, and numerous trickles of hot water cascaded from the rocks and entered the high flowing river. 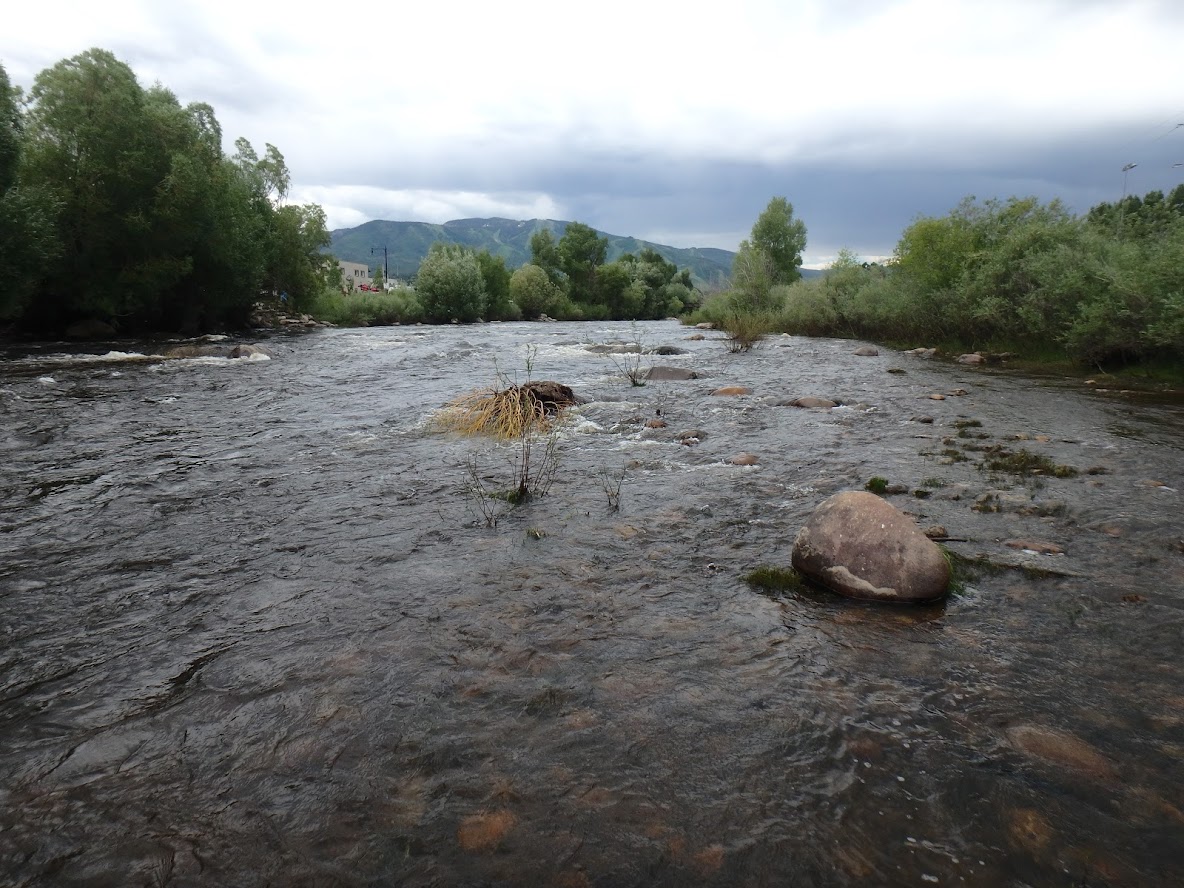 The Run on the Left Usually Produces a Fish

My starting lineup included a tan pool toy, iron sally, and salvation nymph; and in the first hour I landed two twelve inch rainbow trout, as they sucked in the salvation. I stopped for lunch on a large rock among some willows at 12:30. Shortly after my early afternoon meal I broke off all my flies, and as part of my new rigging I substituted a fat Albert for the pool toy. 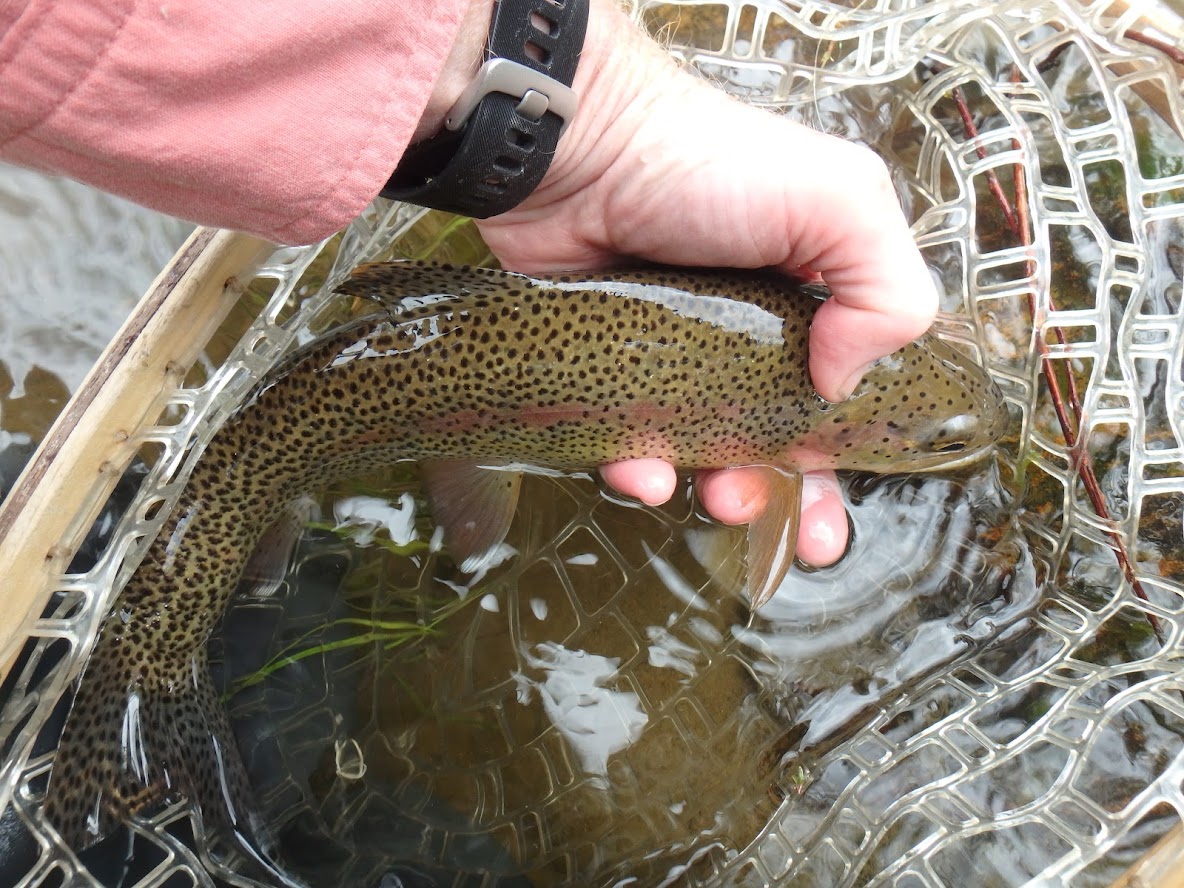 In the first hour after lunch I built the fish count to four, with the salvation nymph accounting for the additional fish. The fat Albert was not generating interest, so I replaced it with an olive ice dub body size 8 chubby Chernobyl, and this fly produced three swirls but no takes. I interpreted this to mean that the trout were seeking golden stoneflies or yellow sallies, so I cycled through a yellow stimulator and yellow Letort hopper, but my theory was apparently off base, as the trout did not respond to these attempts at a more exact imitation of yellow stoneflies. 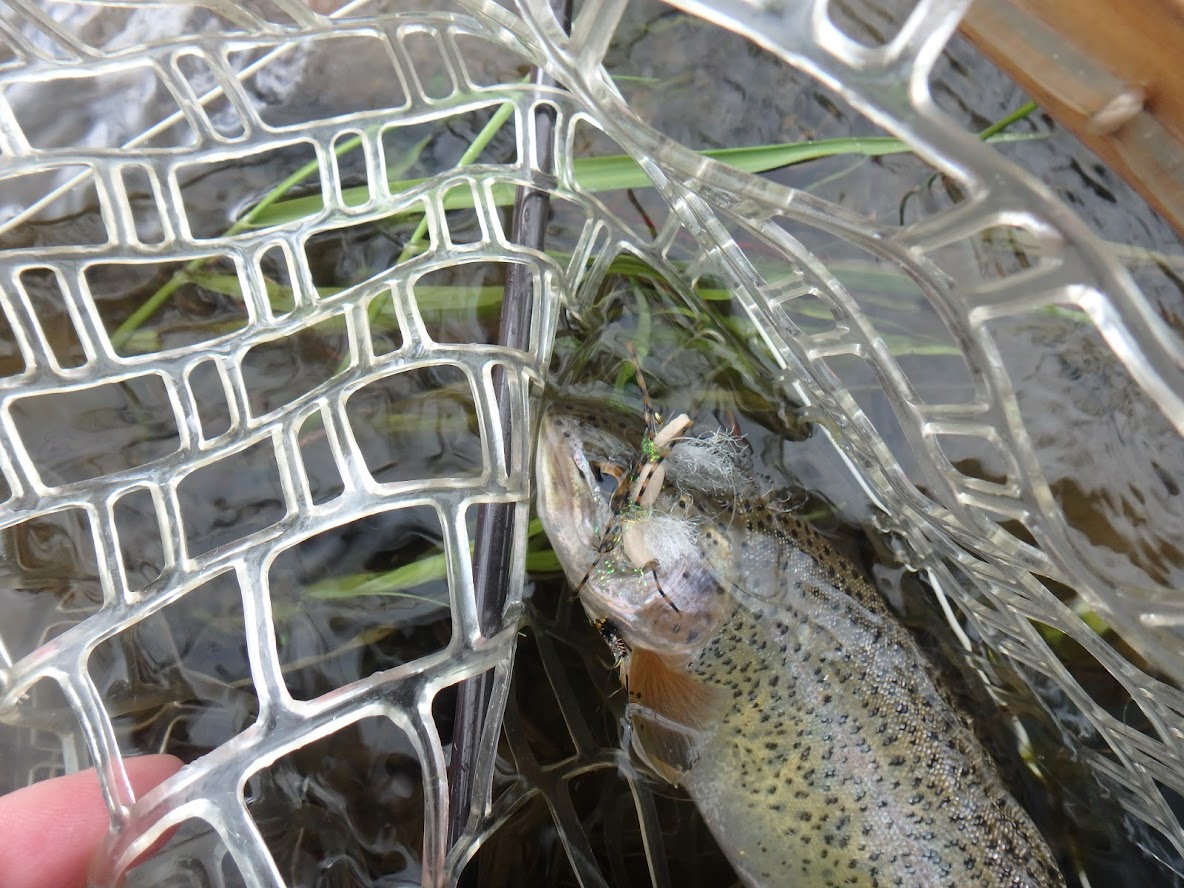 I returned to the dry/dropper for the remainder of the afternoon and committed to an iron sally and salvation nymph as the droppers. Suddenly the olive ice dub chubby started to generate takes, and I elevated the fish count to nine. The ninth fish was a very respectable brown trout that slurped the gaudy foam indicator fly. 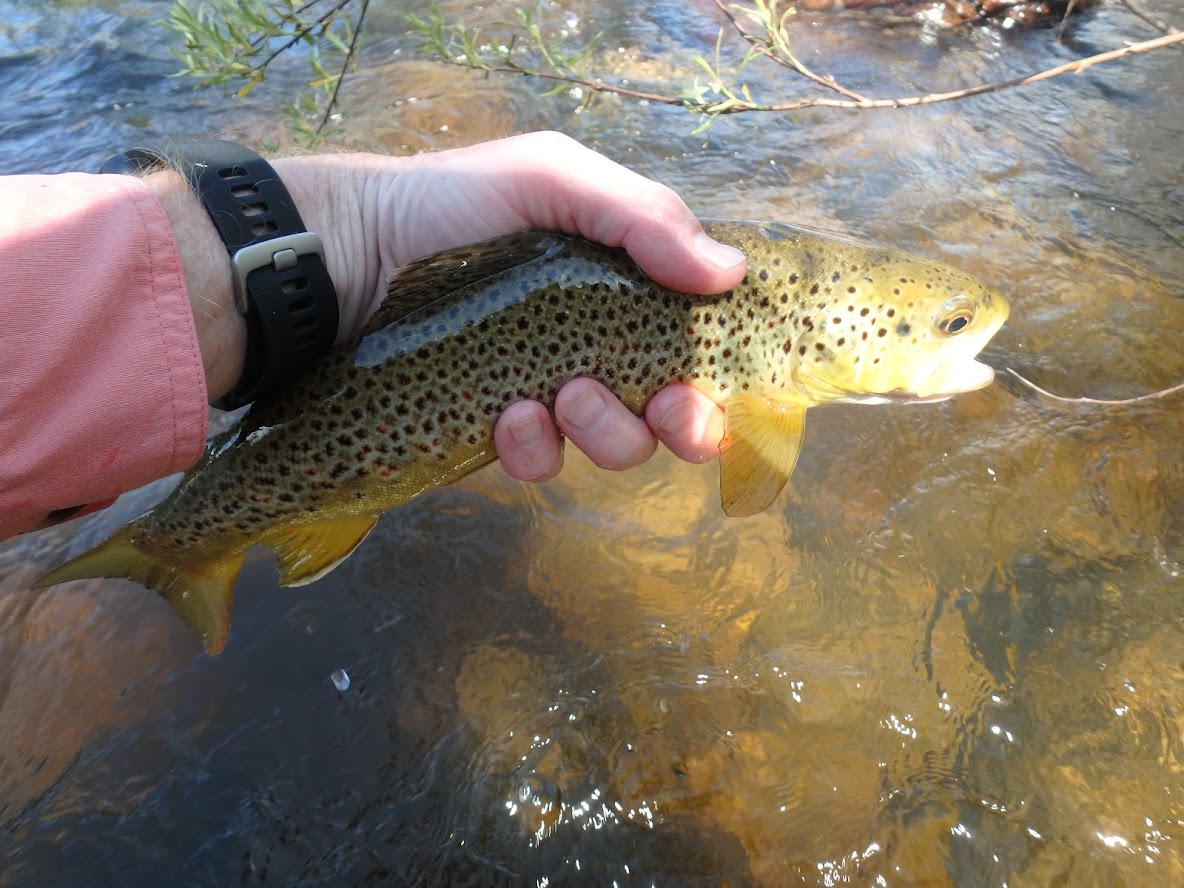 A bit beyond the spot where the brown trout temporarily rested in my net, a nice cutbow hammered the chubby and escaped after a valiant battle. Shortly after this disappointment a brown trout gulped the chubby in the same deep run near the bank, but in the first couple seconds the hook pulled free, and one of the trailing nymphs snagged the tail of the trout. I was unable to follow the fish downstream, and it eventually snapped off all three flies including the highly prized olive ice dub chubby Chernobyl. I rigged anew with a green foam chubby bearing a yellow body, bit it generated only one swirl during its extended tenure in my dry/dropper lineup. It never produced a fish, and I concluded the ice dub body was the key to chubby Chernobyl success on the Yampa River. The last two fish of the day took a trailing hares ear. 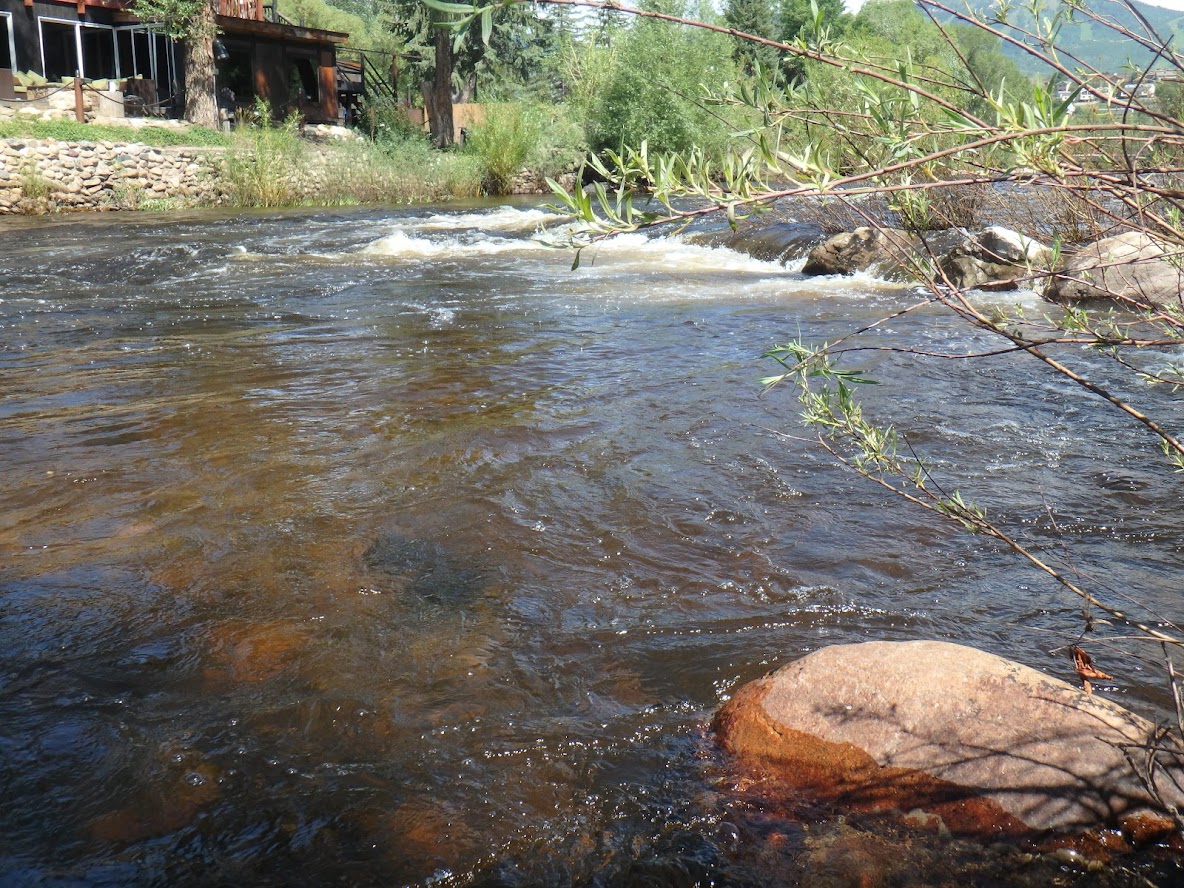 Another Nice Pool Below Man Made Structure

Monday was a so so day of edge fishing. The quantity of fish landed was satisfactory, although size was a bit lacking compared to historical edge fishing experiences on the Yampa River. Putting a damper on the afternoon was the loss of eight flies including the valuable ice dub olive chubby, three iron sallies and three salvation nymphs. I also failed to land the best fish of the day as described in the previous paragraph. I never observed much insect activity, and this circumstance may be attributable to a brief thunderstorm that coincided with the time, when stoneflies normally frequent the river. Stoneflies seem to pop off during warm sunny early afternoons.

I stopped at the Steamboat Flyfisher and purchased five new chubby Chernobyls, but as you might imagine, they did not stock olive ice dub versions. I took stock of my supply in my boat box and stumbled across one more with an olive ice dub body. Needless to say, I moved it to my MFC fly box for Tuesday action. Wading on Monday was improved from the previous week, but fighting the current in the many areas, where the strong velocity bordered the bank, remained taxing. 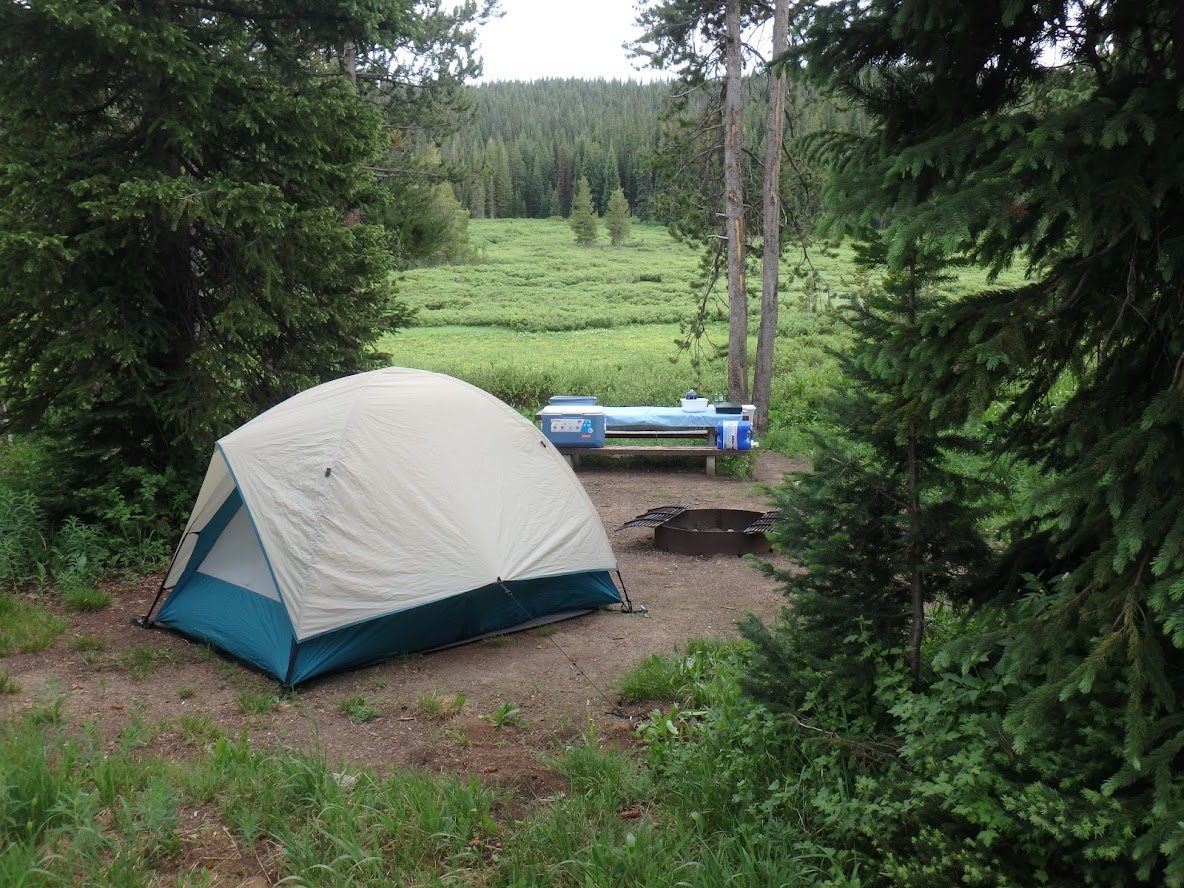 My Home for Two Nights