Location: Between Nighthawk and Scaggy View

Skunked is a term used to describe a day of fishing, when zero fish are caught. I endured my second consecutive skunking today on the South Platte River. I fear the extended run off of 2019 is about to test my patience, as it relates to fly fishing.

On Saturday Jane and I drove to the South Platte River and hiked into Cheesman Canyon on the Gill Trail. On our return a brief thunderstorm stalled our progress, but otherwise we experienced a very enjoyable hike in one of the most beautiful canyons of Colorado. The hike into the canyon also served as a scouting expedition, and I was surprised with the clarity of the South Platte River at this stage of the run off season. The flows were obviously elevated, but sheltered spots along the bank suggested that fly fishing was an option.

Our route to and from Cheesman Canyon followed the South Platte River between Deckers and Nighthawk, and the conditions on this segment of the river appeared to be similar to Cheesman Canyon, with clarity a bit more compromised by the flows from Horse Creek. Originally I planned to visit another lake in Colorado on Monday, but the advanced scouting expedition on Saturday convinced me to modify my plan, and I made the drive to the South Platte River. 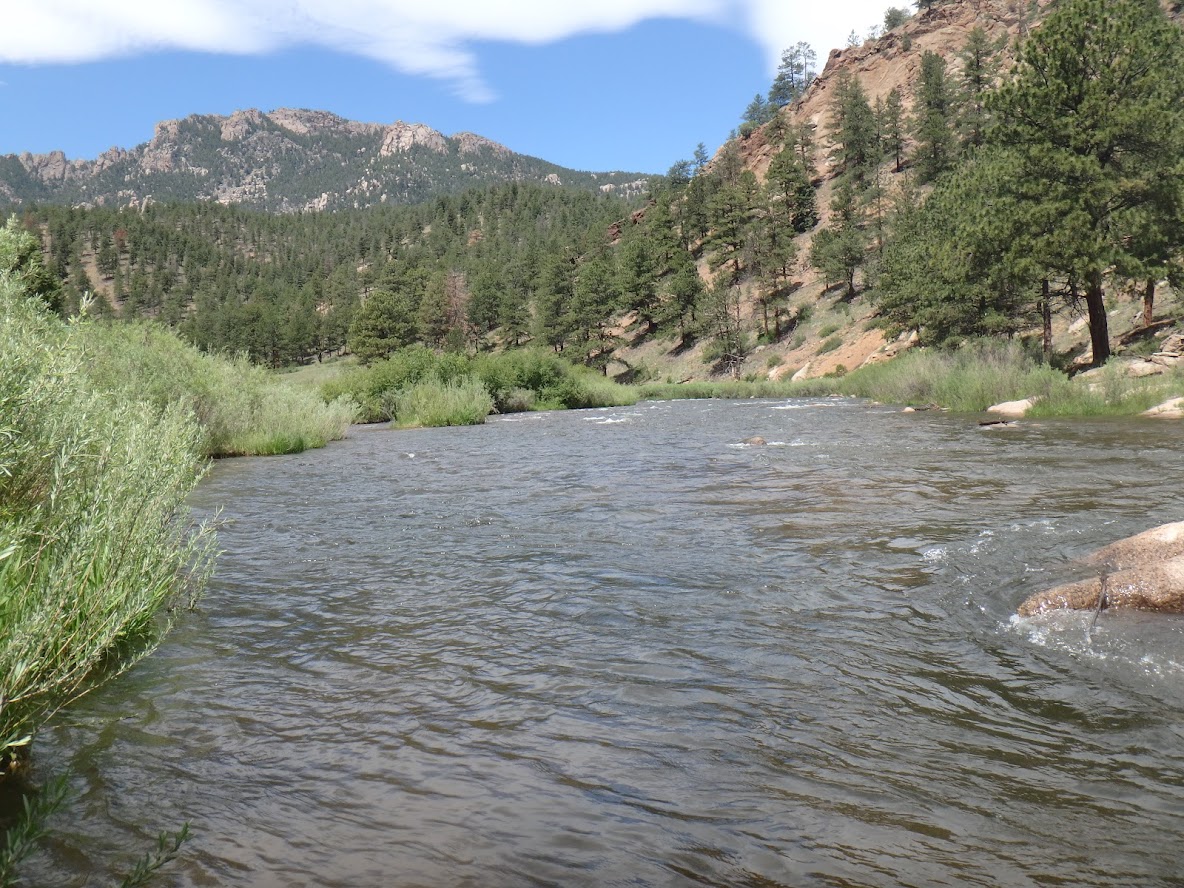 I left the house in Denver by 9:10, and I arrived at the parking lot at the bottom of Nighthawk Hill by 10:30AM. By the time I pulled on my brand new Hodgman waders and rigged my Sage five weight, I began to cast at 11AM. I started fifty yards below the Nighthawk parking lot and worked my way upstream, until I was fifty yards above the Santa Fe. I began fishing with a deep nymphing rig that included a thingamabobber, split shot, flesh colored San Juan worm and copper john. I moved at a fairly rapid clip, and the only fish I saw was a three inch brown trout that escaped my hook, just before I lifted it for a quick release. I focused my casting to the slower moving water along the bank, and I cycled through a series of fly changes that included a salvation nymph, go2 sparkle pupa, hares ear nymph, and orange scud. None of these options resulted in a hint of interest from the resident fish population.

It is rare that I fish in a waterway without seeing evidence of fish in the form of refusals, looks, or foul hooked fish; but that was the case on Monday. I never even saw a fish dart for safety, as I waded along the edge of the river.

At noon I reversed my direction and returned to the parking lot and drove to a new location farther upstream. I was amazed by the number of fishermen on the lower portion of the South Platte River on a Monday, and the lack of space in designated parking areas forced me to drive farther than I originally intended. Eventually, however, I found a small spot large enough for only one vehicle, and I snagged it. I crossed the road and munched my lunch, as I observed the water. A smattering of size 16 caddis dapped the surface next to some willows, and they represented the only insect activity on the river. 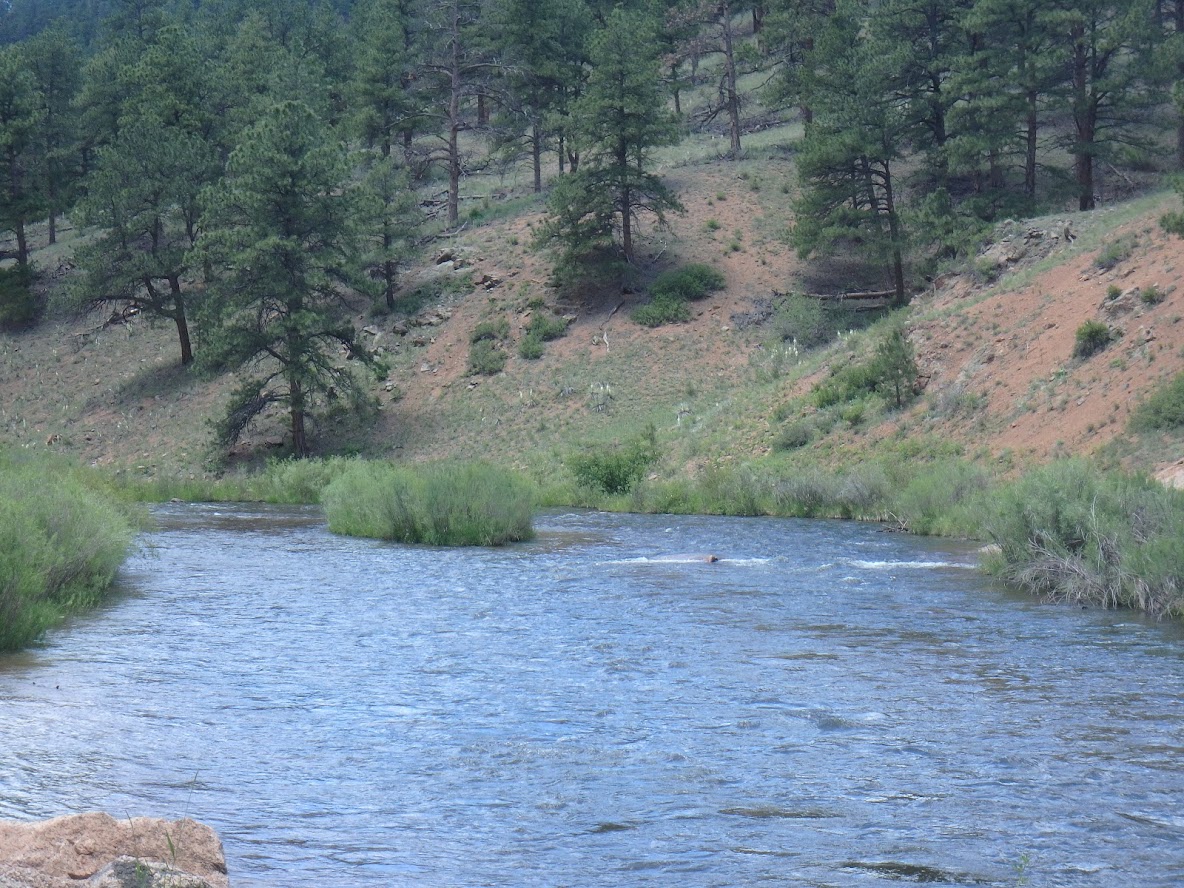 After lunch I walked down the road for .2 mile, and then I dropped down the bank and continued my search for a single landed trout. After another stretch of fruitless casting and drifting, I noticed a small trout, as it elevated to inspect my orange thingamabobber. What was I to make of this? I reasoned that perhaps the fish was attracted to bright colors, so I removed the indicator, split shot, and nymphs; and I switched to a hippie stomper with a red body. I tossed the buoyant attractor to the spot, where the fish elevated, but the stomper went unmolested during ten solid drifts.

Now that I was in single dry fly mode, I decided to experiment with some different offerings, and I swapped the hippie stomper for a size 16 gray deer hair caddis. This was a close match to the natural caddis buzzing about above the river. It was a great attempt at hatch matching, but the trout apparently did not agree. I recalled days in the past, when I experienced success with a yellow Letort hopper and beadhead pheasant tail nymph. I leveraged this memory to replace the caddis with a size 10 yellow Letort hopper, and again fruitless casting was my reward.

I finally abandoned the indicator inspector and moved upstream along the willow lined left bank. Sighting one fish spurred my thoughts, and I paused to consider the clues of the day so far. The deep nymphing technique yielded a three inch brown trout in 2.5 hours of fishing, and a single trout rose to inspect an orange indicator. Perhaps the fish were looking upward, and this explained the total avoidance of my nymphs.

I decided to test the tried and true dry/dropper method. I knotted a tan pool toy to my line and dangled a beadhead hares ear and salvation nymph beneath it. These flies and the dry/dropper method were far and away my most productive method during all seasons, so it deserved a trial on the South Platte River. I cast the trio of flies to some spectacular soft edges and moderate riffles along the left bank for the next 45 minutes, but again the fish were not interested. Of course this assumes that fish were present, and I began to wonder if perhaps that was a bad assumption.

By three o’clock I was totally frustrated and burned out on fly fishing in high water, so I stripped in my flies and hooked them to the rod guide. I was hot and tired and ready to accept a second skunking within the last seven days. I actually contemplated returning to the South Platte River in Cheesman Canyon on Tuesday, but my Monday outing convinced me to consider other options.