My journey into the backcountry of the Flattops along the South Fork Trail qualified as the number one day of fly fishing during 2015. Needless to say I was exceptionally excited about my prospects on Monday September 12, 2016. Originally I planned to have a fishing companion on my 2016 excursion, but John’s participation was quashed by a tennis tournament. My buddy John read about Lost Solar Creek, a tributary of the South Fork, in a Colorado fly fishing guidebook, and fishing in Lost Solar Creek immediately found a place on his bucket list. A five mile hike to Lost Solar Creek was in our plans.

Ironically I had a conversation with a fellow camper on Sunday evening, and he informed me that there was a wild fire in the Lost Solar Creek drainage, and it was closed to fishing and hiking. John’s tennis tournament saved him the disappointment of being denied access to his dream destination. When I woke up on Monday morning, I experienced firsthand confirmation of the wildfire, as the smell of thick sooty smoke smothered the campground. My camping friend warned me that the smoke was the worst in the morning, until the wind picked up and pushed it toward the north and east.

Given my elevated state of eager anticipation to renew my success on the South Fork, I was ready to hike by 8:30. I pulled on my waders, assembled my Sage four weight, stuffed my backpack with a lunch, and set out at a vigorous pace. It was quite chilly at the outset, but I blocked the urge to wear an extra layer, as I knew the exertion from hiking would quickly overheat my body. The trail was worn deeply by the impact of horseshoes, and the lack of rain caused each foot strike to kick up a small dust cloud. After I hiked for two miles I paused to look at a steep vertical ridge to the north, and here I gazed upon several dense clouds of smoke obscuring the gray rock face. I snapped a few photos to forward to John upon my return. 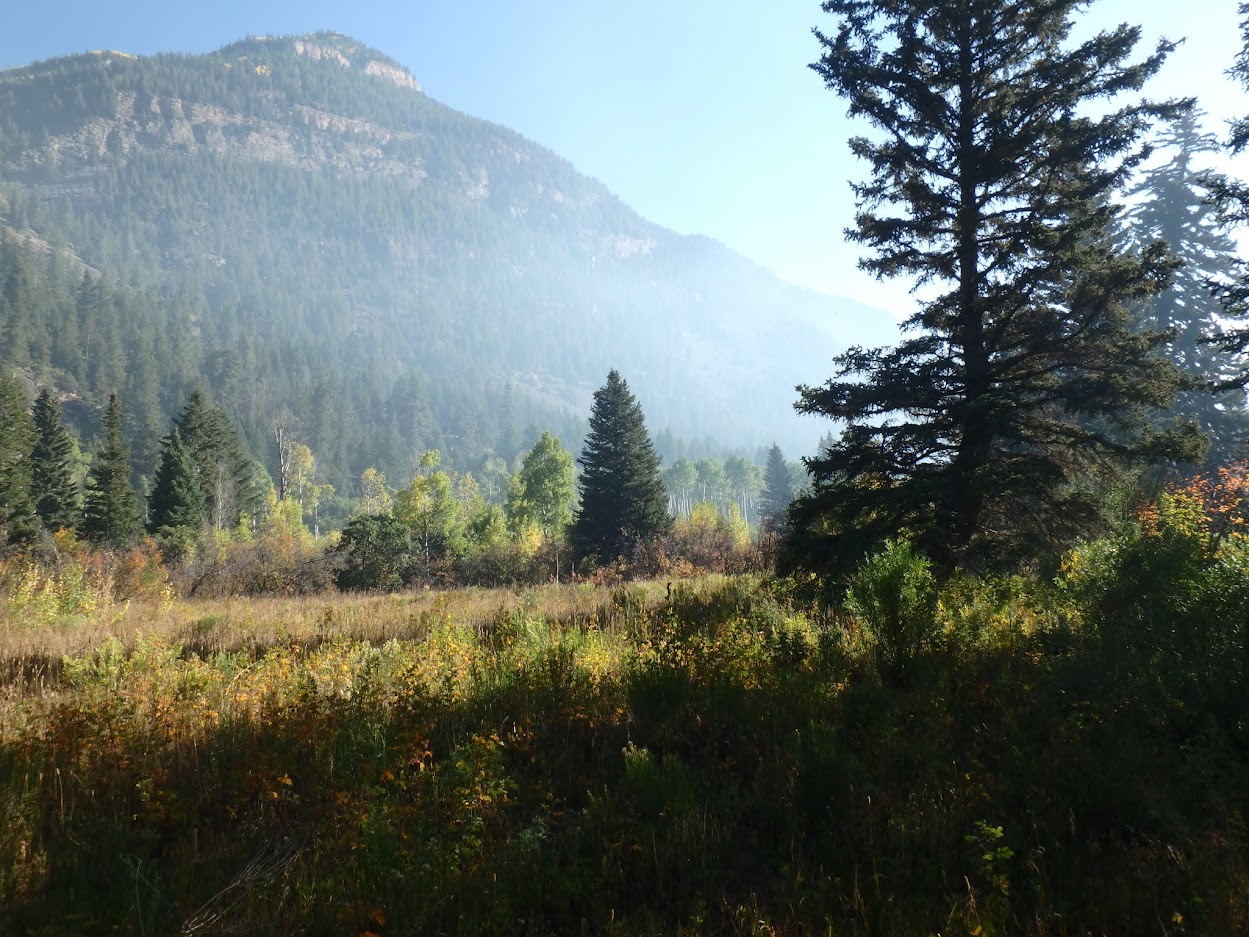 Lots of Smoke to the Northeast

After an hour of hiking at a rapid pace, I veered to the right and approached the edge of the river. Once again I was mesmerized by the clarity of the stream, but I quickly refocused on fly fishing and knotted the same tan pool toy and salvation nymph to my line that I deployed on Sunday, but on Monday I began with a hares ear instead of the ultra zug bug as the middle fly. Between 9:30 and noon I landed four small rainbow trout, and I can assure the readers that it was tough fishing and not even close to my elevated expectations based on my 2015 venture. I limited casts to water at least three feet deep, as I leveraged my Sunday experience near the campground, but even this discretionary approach did not aid my efforts to establish an above average fish count. 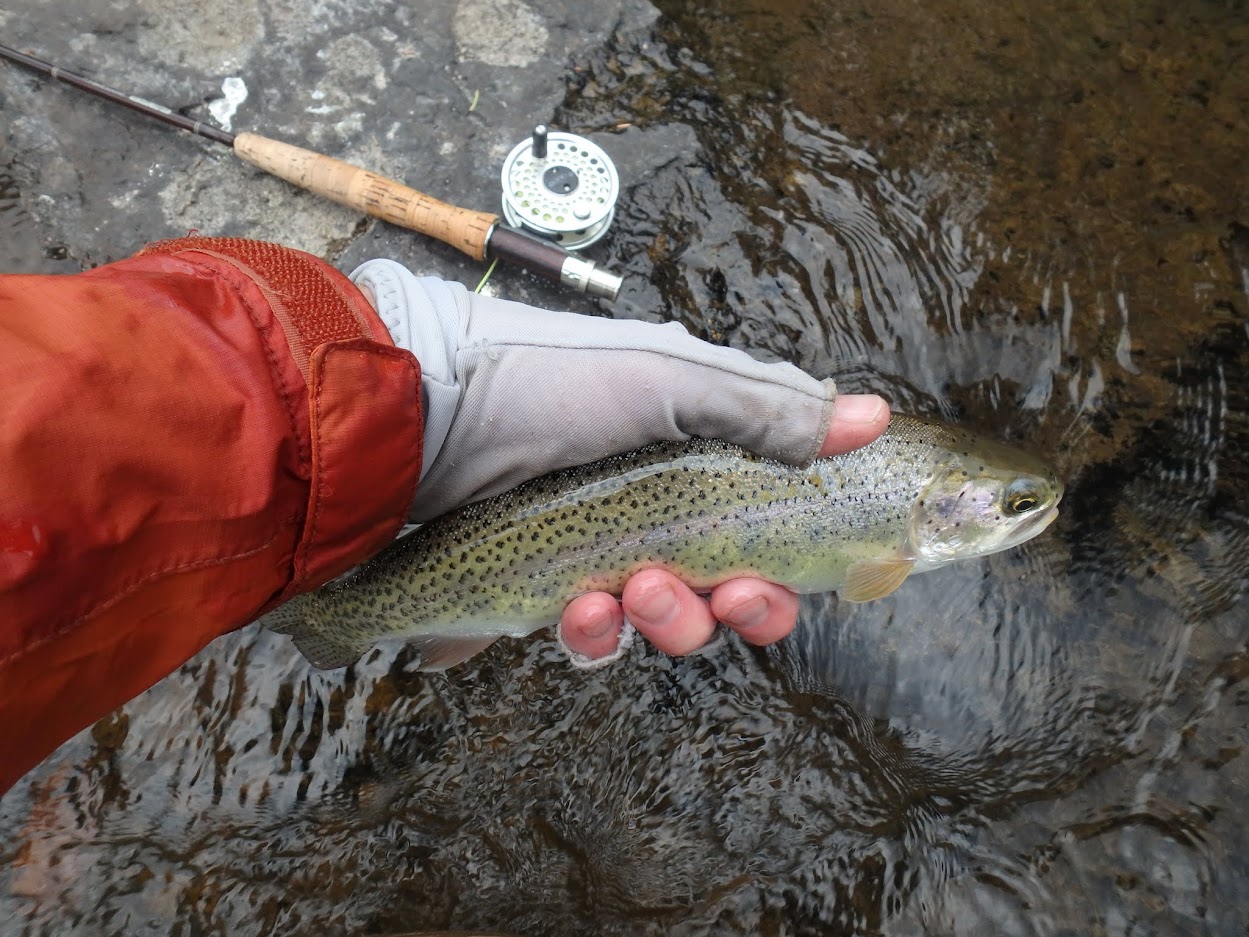 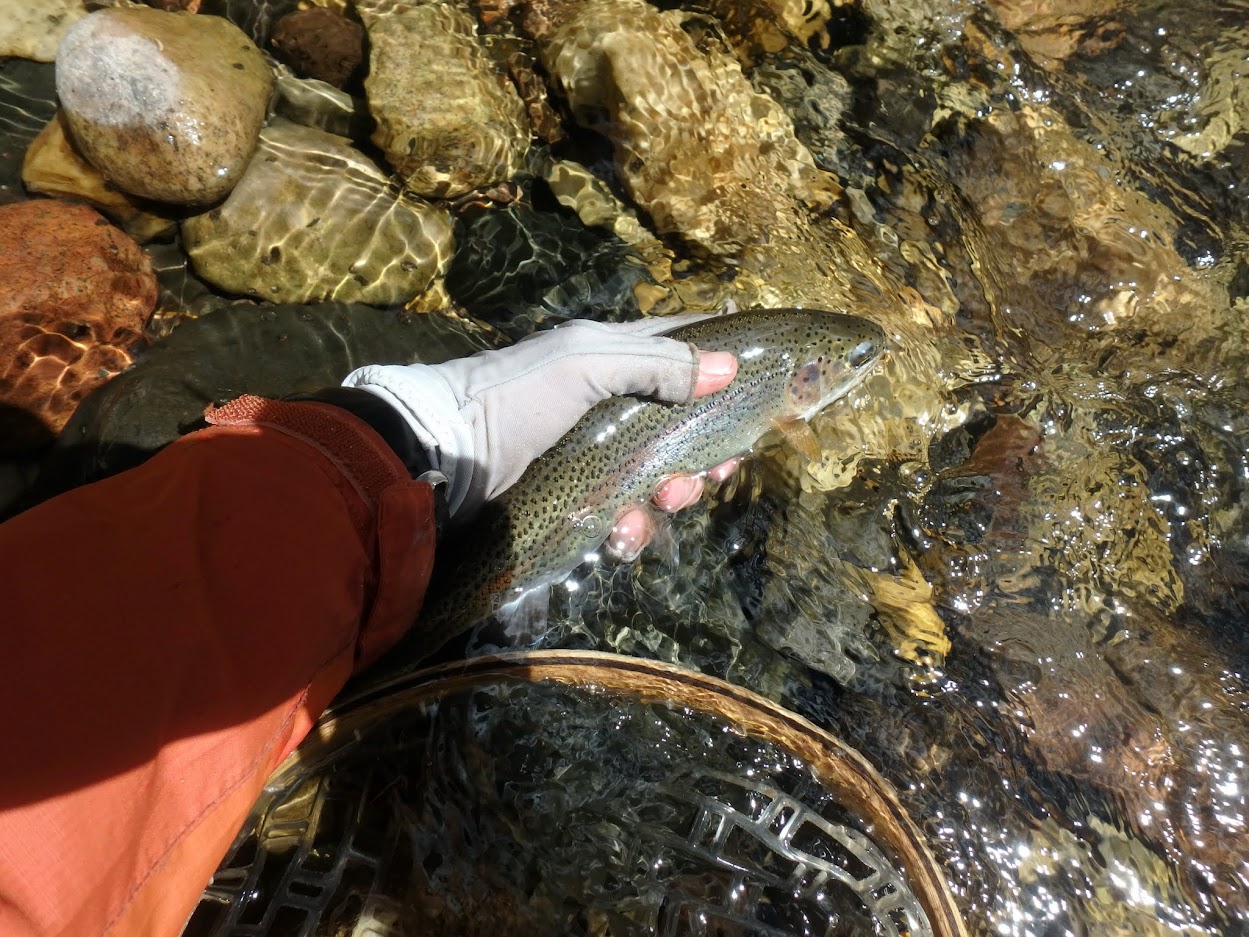 After lunch I began to doubt the dry/dropper strategy, so I experimented with different approaches. First I tried a solitary dry fly in the form of an olive stimulator, but the fish showed no interest, not even a look or refusal. Because the flow was higher than normal, and I was fishing deep spots, I tested a deep nymphing setup with an indicator, split shot, iron sally and beadhead hares ear. This ploy did not last long, as I repeatedly got hung up, and the lack of attention from fish did not justify the hassle. 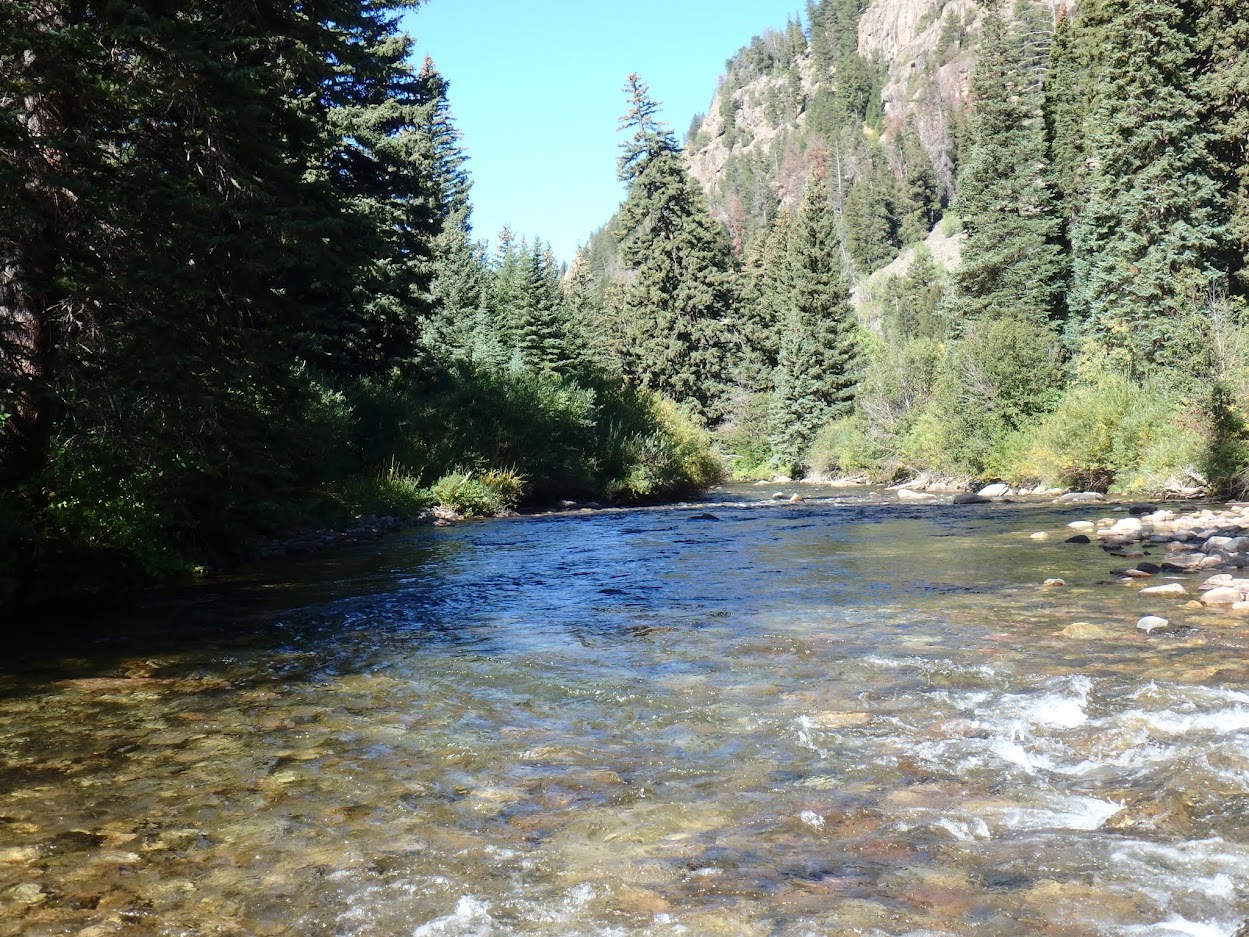 Finally I returned to the dry/dropper method with a yellow fat Albert leading the way, and below that I dangled an ultra zug bug and salvation nymph. When I reviewed my 2015 post I recalled that these two flies were heavy producers. These three flies remained on my line from 1PM until 4PM, and I accumulated seven additional fish to bring my total on the day to eleven. In addition I endured five long distance releases, so the action was better than the morning, although it was never comparable to 2015. From 2 – 3 PM I passed through a very attractive area where the river narrowed and created an abundance of deep runs and pockets among numerous exposed boulders. This segment produced generous quantities of above average trout in 2015, but history did not repeat on September 12. The highlight of the afternoon was a fourteen inch rainbow that grabbed the salvation, and this connection generated a significant test to my fish battling skills. 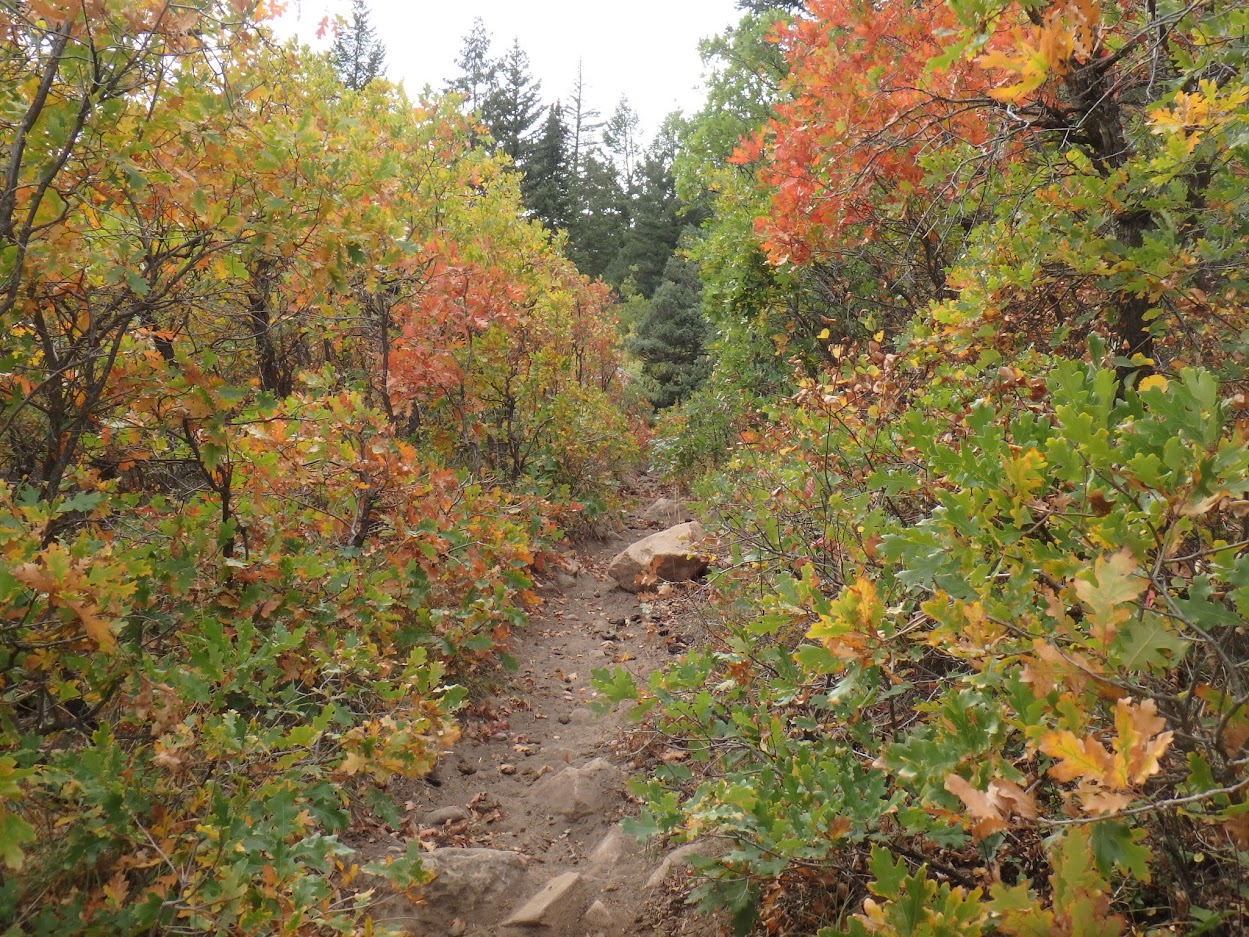 Insect activity was completely absent, unlike 2015 when pale morning duns, blue winged olives and caddis made appearances around mid-afternoon. The wind was quite blustery, and this circumstance made accurate casting quite a challenge. I wore my raincoat as a windbreaker for the duration of the afternoon, and I was never too warm. It was a tough day on the South Fork, and I am baffled for reasons. It felt like the season was more advanced than previous trips, so perhaps the late summer hatches were over, and this explained the lack of activity? The water was higher and colder, so perhaps the metabolism of the trout was already reduced? Should I have persisted with the single dry fly longer, as the presentation of a lighter fly with a soft landing may have been more to the liking of the trout? Did a group of fishermen pass through during the summer and catch their limit of fish repeatedly, thus, reducing the wild population? Perhaps the wind announced the arrival of a cold front, and the weather change put down the fish? 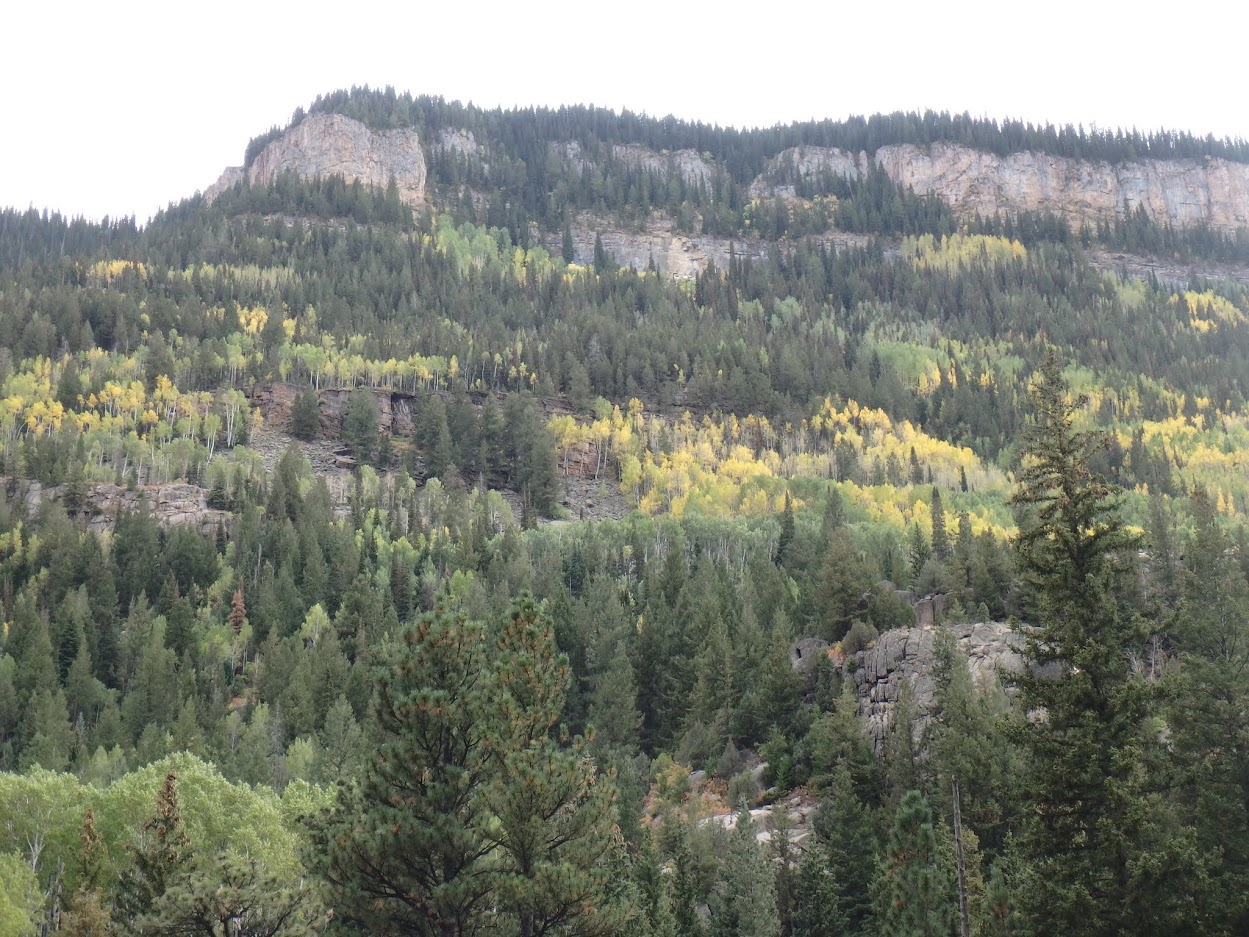 I will never know the answer, but I am not giving up on the South Fork. Historically it has been more temperamental than the North Fork, so I will continue to take my chances. The slow day did make my decision on where to fish on Tuesday easy. I prepared to move on to the North Fork Campground and the North Fork of the White River to fish.