I must confess that you will not find this fly anywhere else if you search the internet. In addition, I have not yet tested it in a live stream scenario. The salad spinner was designed by my young friend Danny Ryan, and although I have not used it, Danny demonstrated to me that it was a fish catching machine on the South Platte River, as he extracted fish after fish from that drainage on an October visit. This day of fishing convinced me that I needed to manufacture some to add to my fly box for the upcoming season. 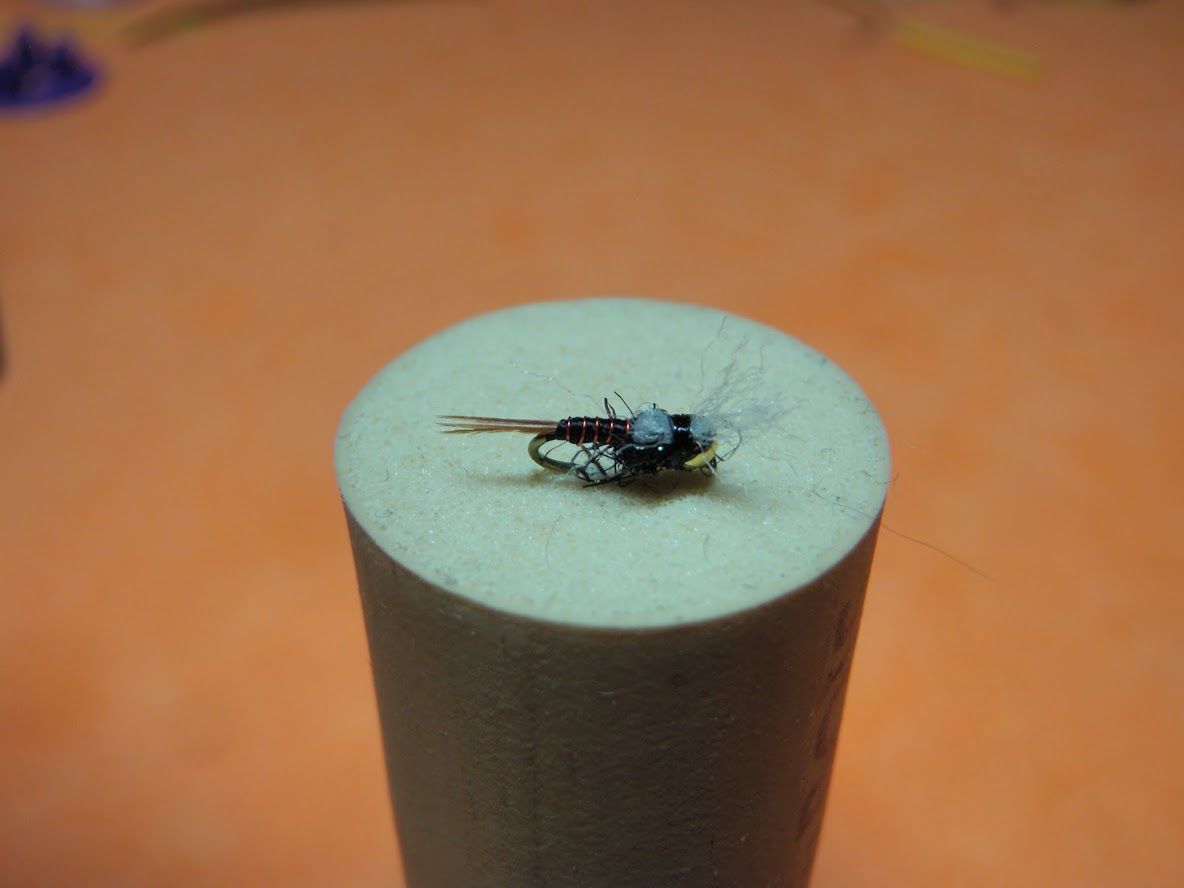 Danny has limited funds to purchase fly tying materials, so he attempts to make the most out of what he has. A friend in Texas gave him a box of materials that her deceased husband accumulated, and Danny stretches this cache of floss and yarn as far as his imagination allows him. This then was the source of the salad spinner. Danny caught quite a few trout during our October day on the South Platte, and when he removed the salad spinner from the jaws of several fish, he noticed that quite a bit of aquatic vegetation accumulated on his fly, thus the name salad spinner. 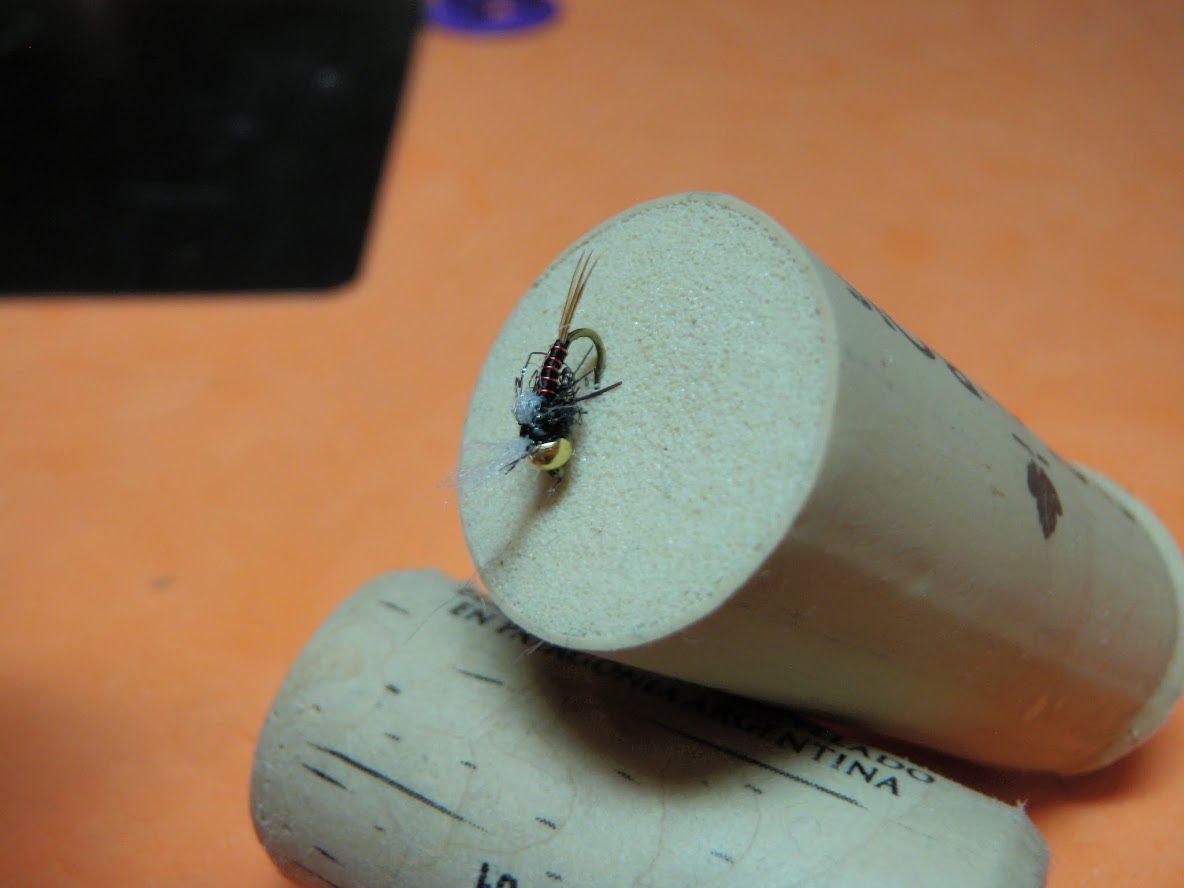 Angled from the Side

Although the fly is not intended to imitate a specific insect, I suspect that it falls into the midge genre, and it is probably taken for an emerging midge pupa. The combination of fish attracting colors makes it stand out in the cold tumbling flows of Colorado rivers and streams. They are a relatively quick tie, so I created ten as my starting inventory. If the fish demonstrate a strong preference for this black attractor, I will quickly produce some more. 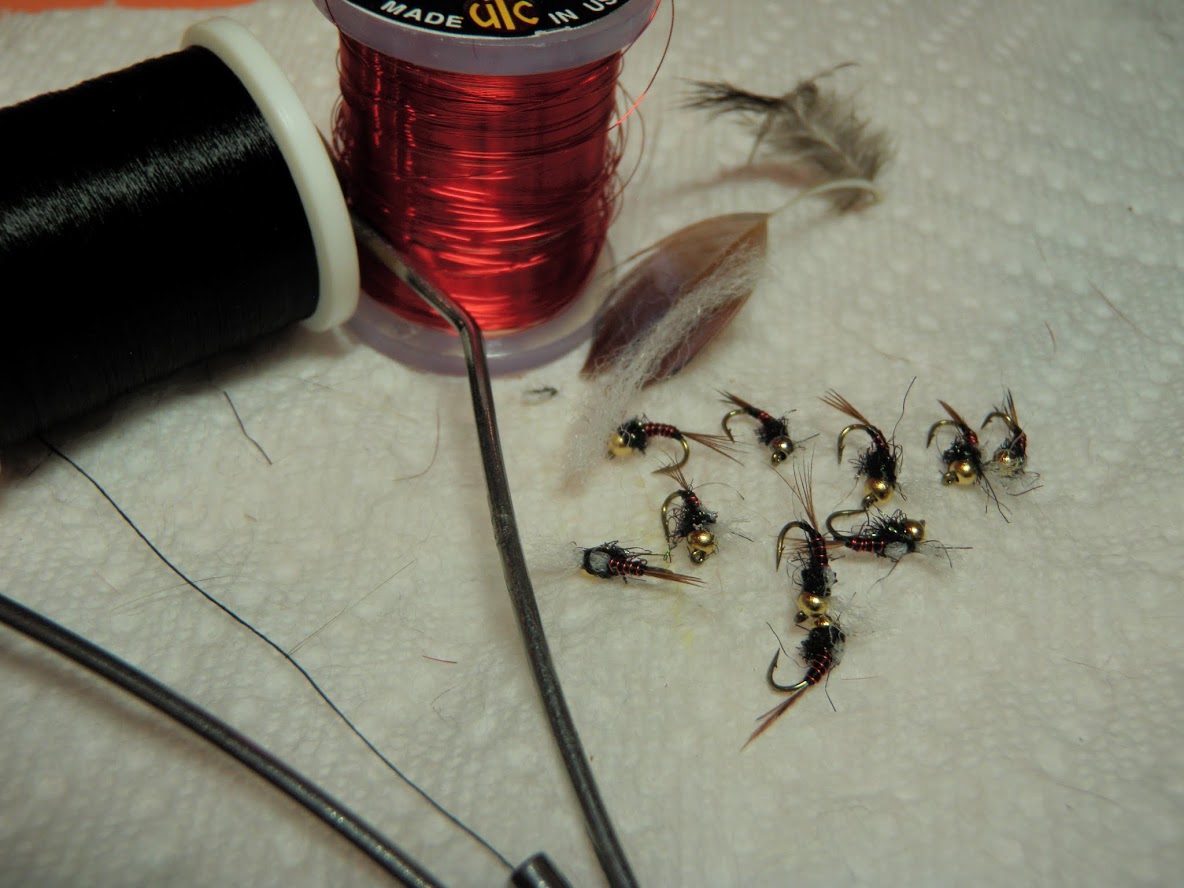 Here are the steps:

2. Place some black thread in your bobbin and attach it to a hook 1/3 of the way behind the hook eye.

3. Attach brown or speckled fibers from a pheasant tail feather as a short tail.

4. Attach a strand of extra small red ultra wire to the shank in front of the tail.

5. Wrap the tread forward  and create a tapered abdomen until you reach the 1/3 point where you attached the thread.

6. Wrap the red wire forward to create a rib and tie off at the end of the abdomen.

7. Tie in a section of white poly. The thickness should match the size of the fly, but for a small hook size probably 8-10 fibers.

8. Tie in two strands of peacock herl and create a thorax. I actually substituted black peacock ice dub for the natural peacock.

9. Fold the poly yarn forward over the thorax and tie it down and then whip finish.

10. Allow the poly yarn to angle forward over the hook eye and cut it off to leave a stub to represent an emerging wing.