After making a four hour drive on Saturday morning, I needed a Flattops destination relatively close to the road, and the North Fork became my choice. I parked at the end of my anticipated exit point and then hiked downstream .6 mile to an easier access path. I needed to make steady progress over roughly four hours to reach my exit point, so I skipped the braided section where I normally begin. 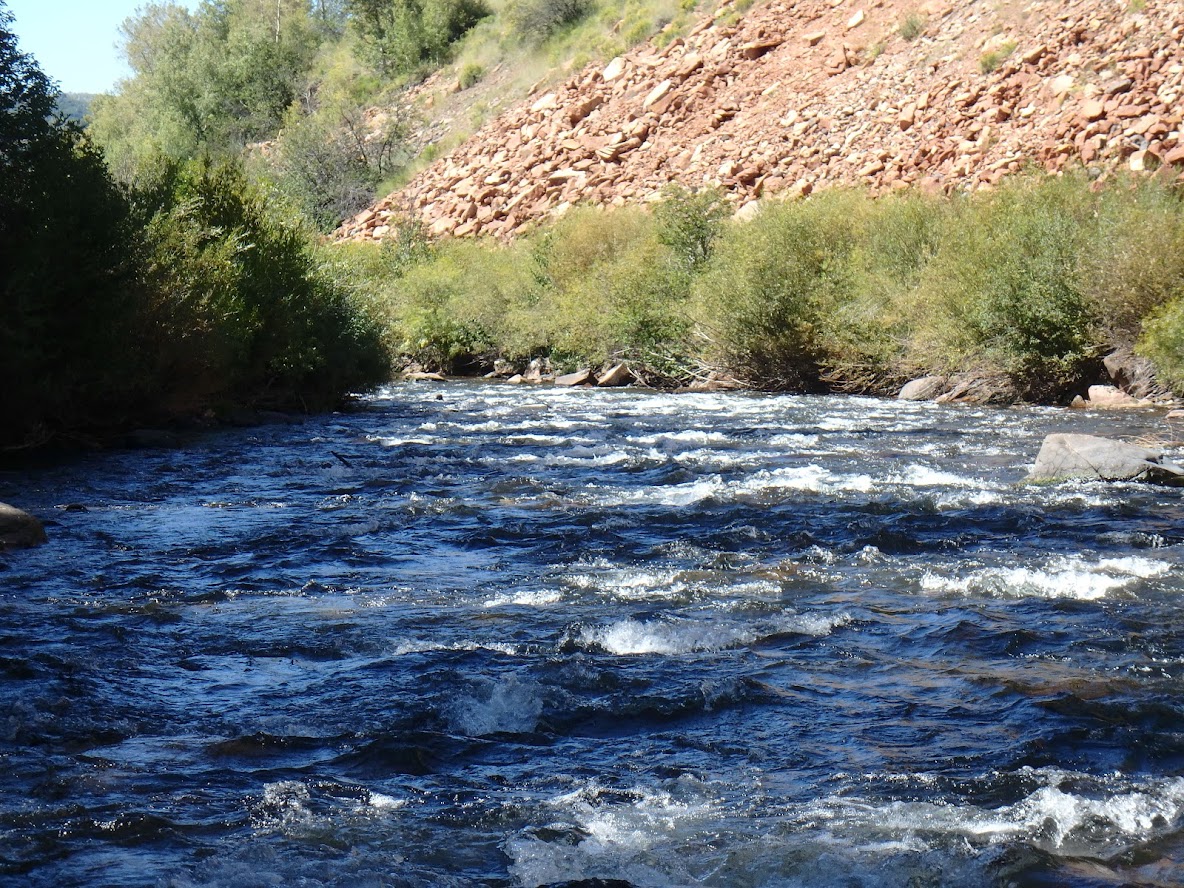 I rigged a dry/dropper that featured a tan pool toy hopper, ultra zug bug, and salvation nymph. I maintained these offerings throughout my 3.5 hours, although I exchanged the ultra zug bug for a hares ear, when I lost my entire leader, but more on that later. I moved in a fairly steady pace and focused on deep runs, pockets, and riffles. The strategy paid off as I boosted the fish counter to thirty-one before I quit at 4:30. 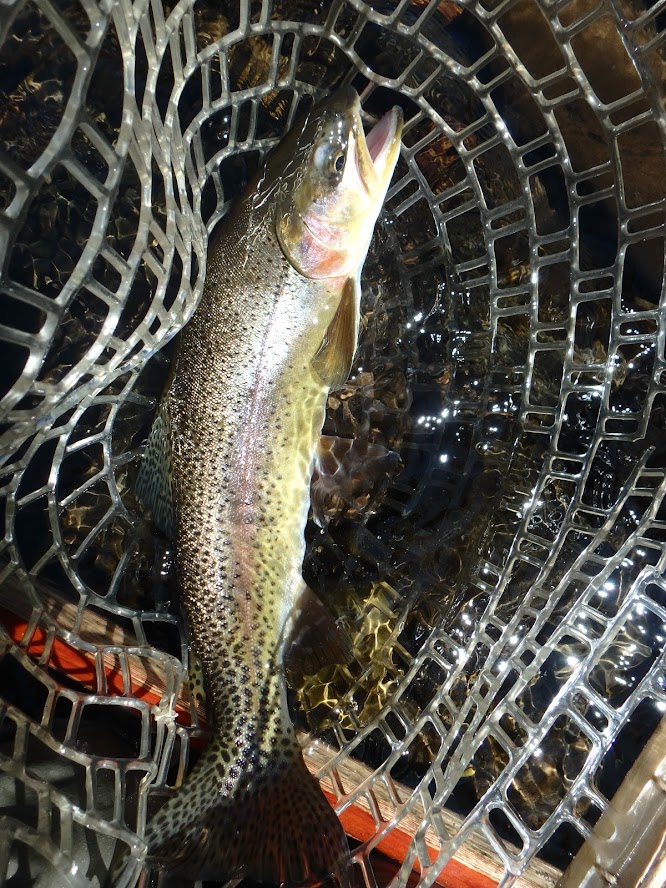 The pool toy hopper attracted the larger rainbows and included a fifteen inch rainbow, a pair of bows in the 13-14 inch range, and a decent number of feisty twelve inch trout. The ultra zug bug produced a couple during its tenure on the line, and the hares ear accounted for a couple late in the afternoon. The remainder of the landed rainbows latched on to the salvation, and a lift or swing at the end of the drift was consistently effective. Three landed trout were of the brook variety, and the remainder were spunky rainbows and cutbows. 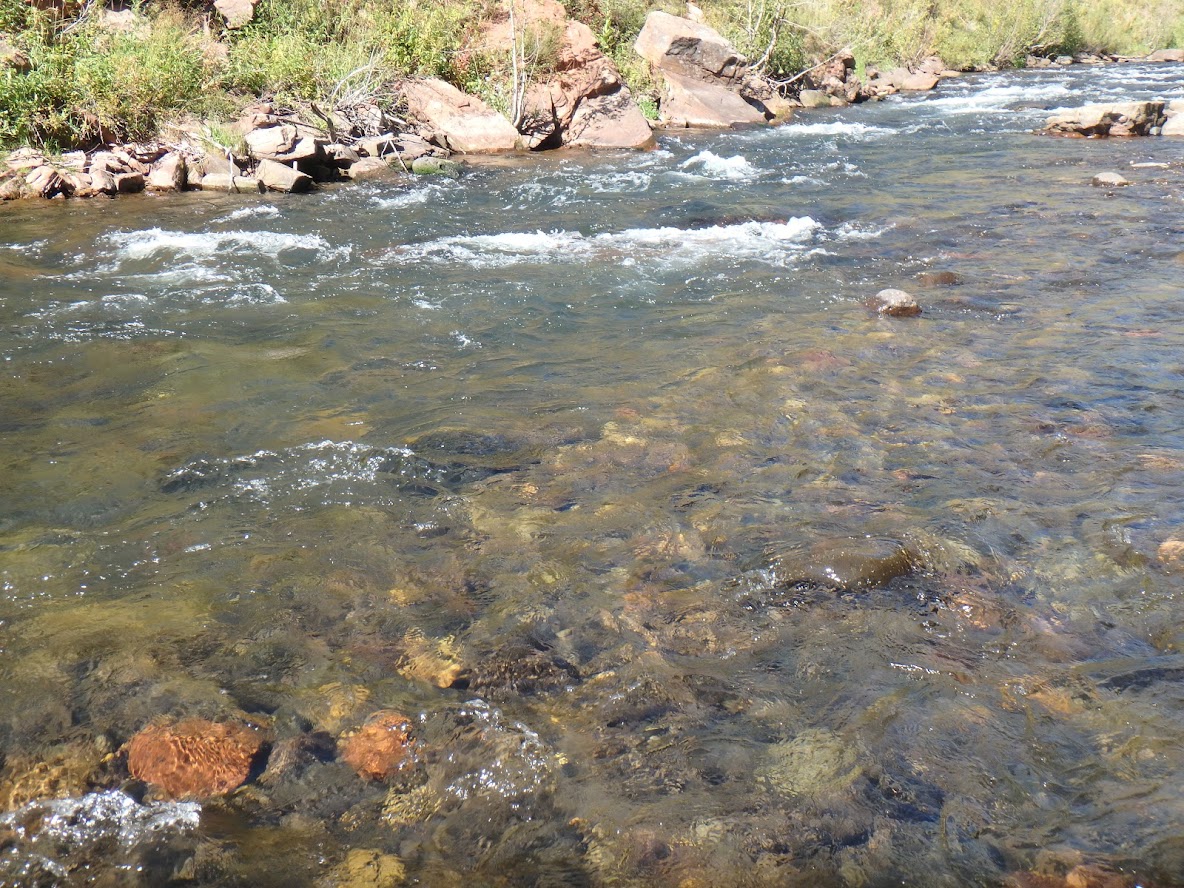 Target for My Flies 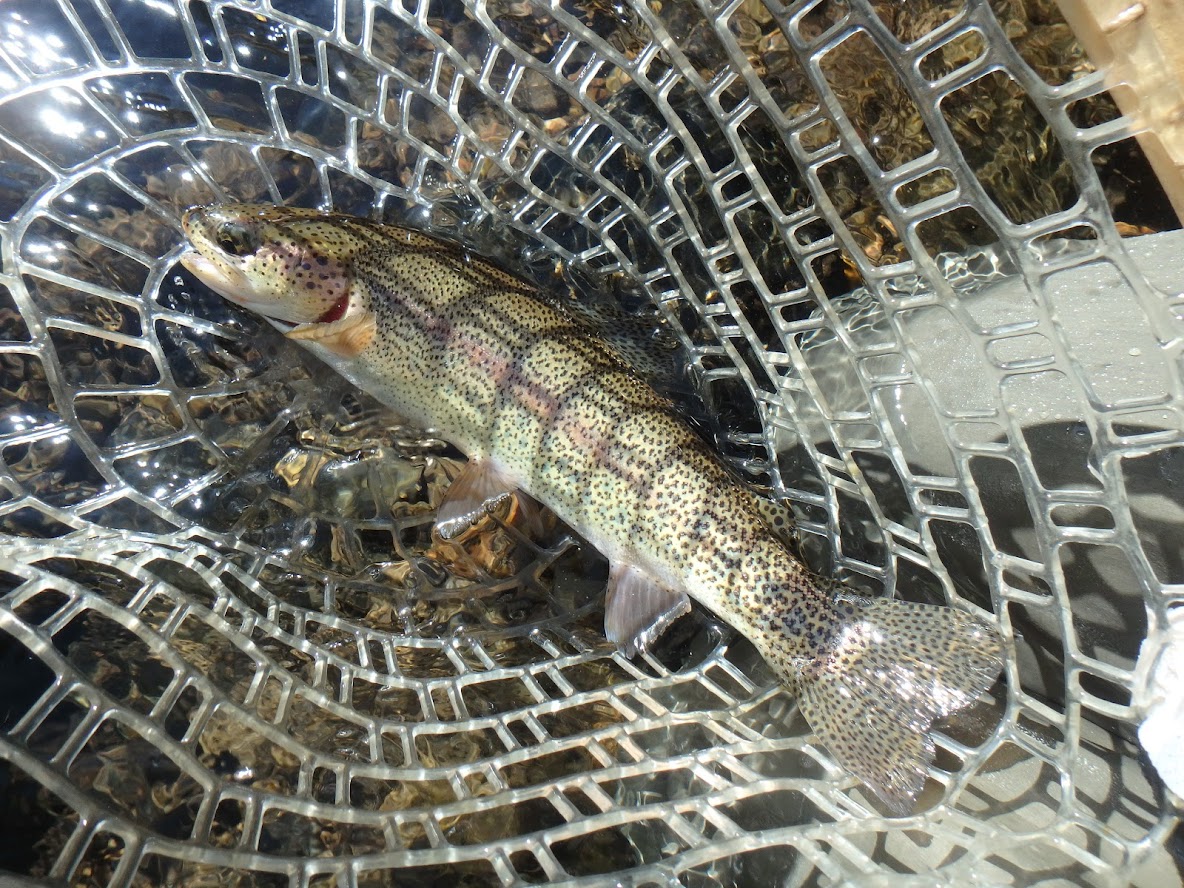 In the very first run of moderate depth along the left bank I connected with a very hot fish, but after a torrid downstream streak, it broke off the salvation. The most notable event occurred in a left channel around a small island. The river tumbled over some rocks and carved out a deep hole, that was twenty feet long and twelve feet wide. A dead tree branch extended downstream along the left side of the small pool. I landed an eleven inch rainbow, as I lifted the salvation at the tail of the pool, and I decided to lob a cast toward a seam left of the center current. As the pool toy tumbled toward the middle of the pool, a large rainbow appeared and swirled around and then down on the foam terrestrial. I reacted with a swift hook set, and the aggressive eater immediately headed toward the branch. I applied steady side pressure to avert a line wrap, and just as I appeared to gain the upper hand, the line popped, and the combatant was free. I cursed my bad luck and expected to learn that the hopper and both nymphs were missing in action. This assumption proved correct, but the news was even worse. The entire tapered leader was absent, and I faced the task of rebuilding my entire leader below the end of the fly line! What happened? I can only conclude that the monofilament loop that was part of the loop to loop connection was cut or abraded, and the weak spot severed from the pressure of the trout. I was rather disappointed, but eventually accepted the separation as part of the game. 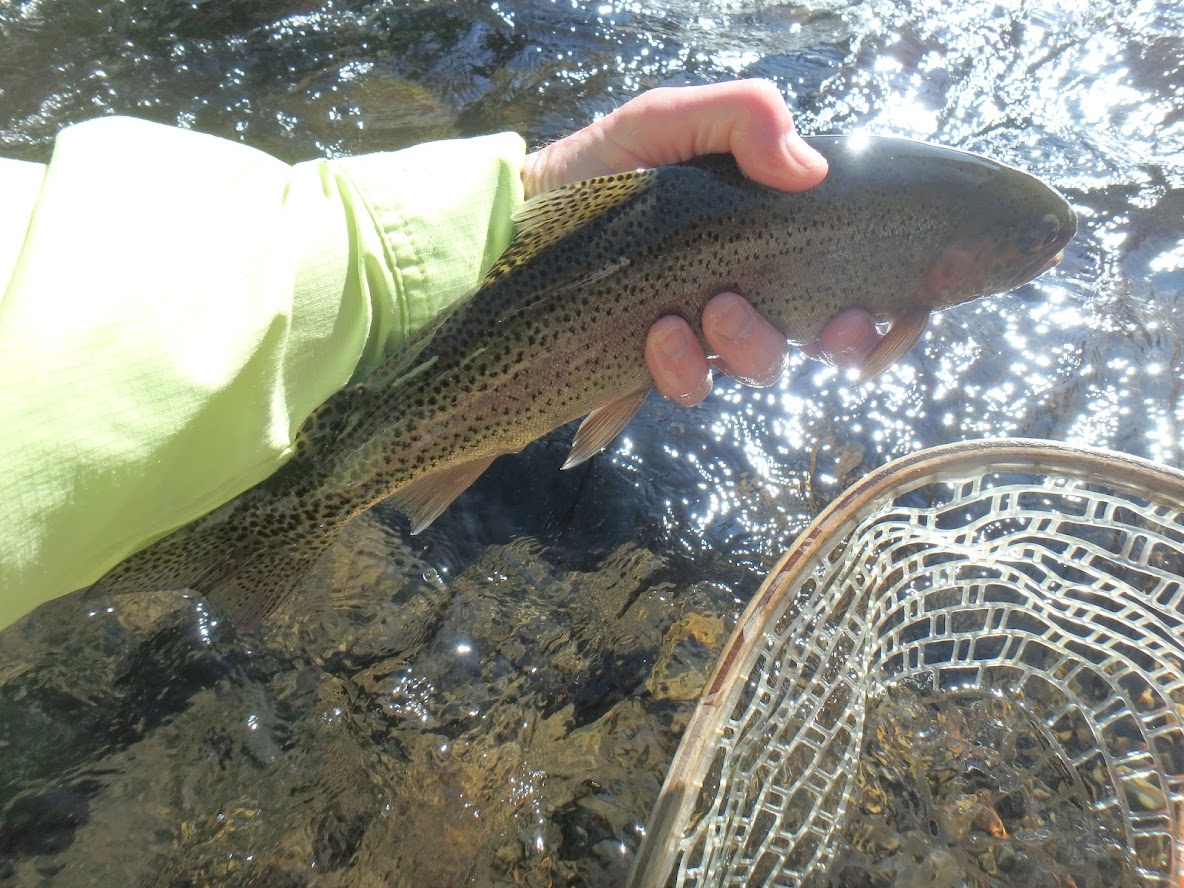 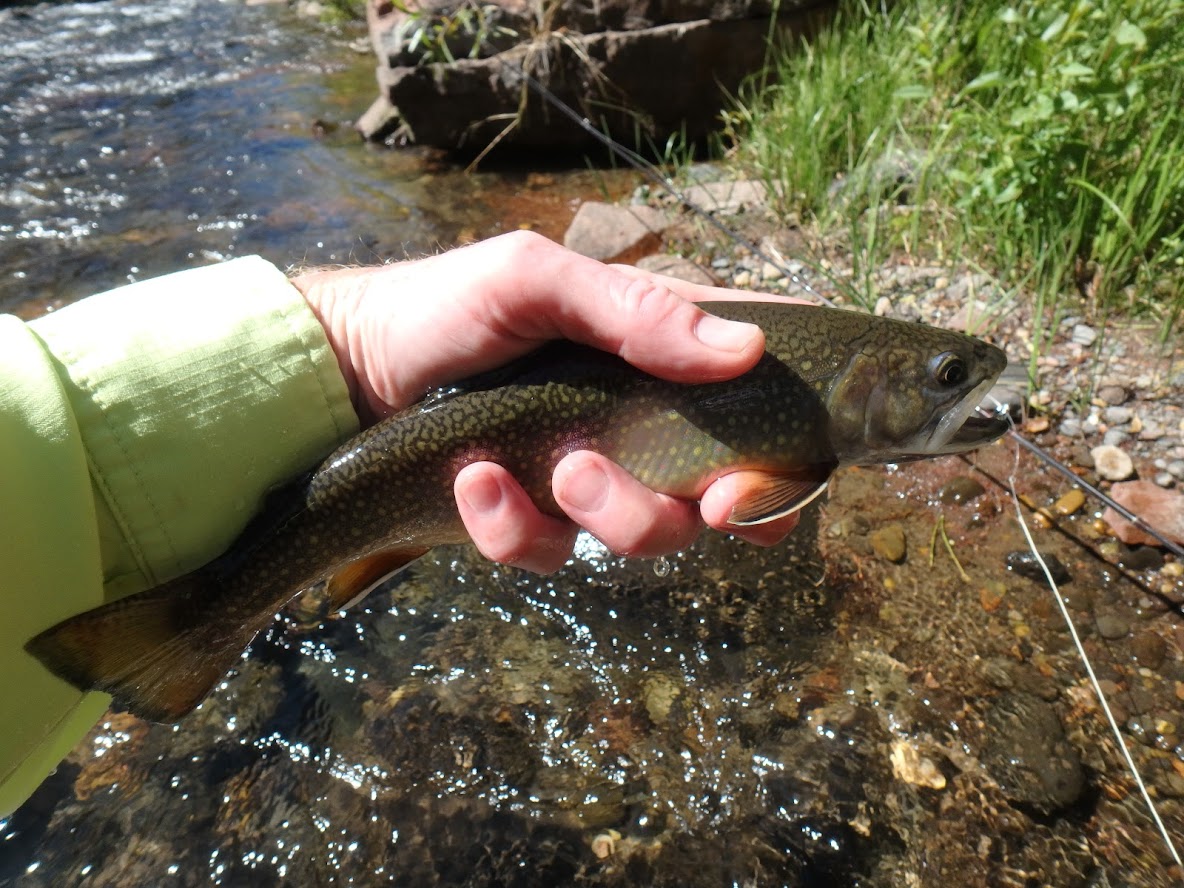 A Brook Trout Joins the Mix

Thirty-one fish landed in 3.5 hours served as salve for my bruised ego, and I was euphoric over my splendid day one. Even more impressive than the fish count was the size of the trout landed, with many trout in the robust twelve to fourteen inch range. My four days in the Flattops was off to an auspicious start, and I continued on to a campsite at the South Fork Campground. Would my good fortune continue on Sunday? Stay tuned. 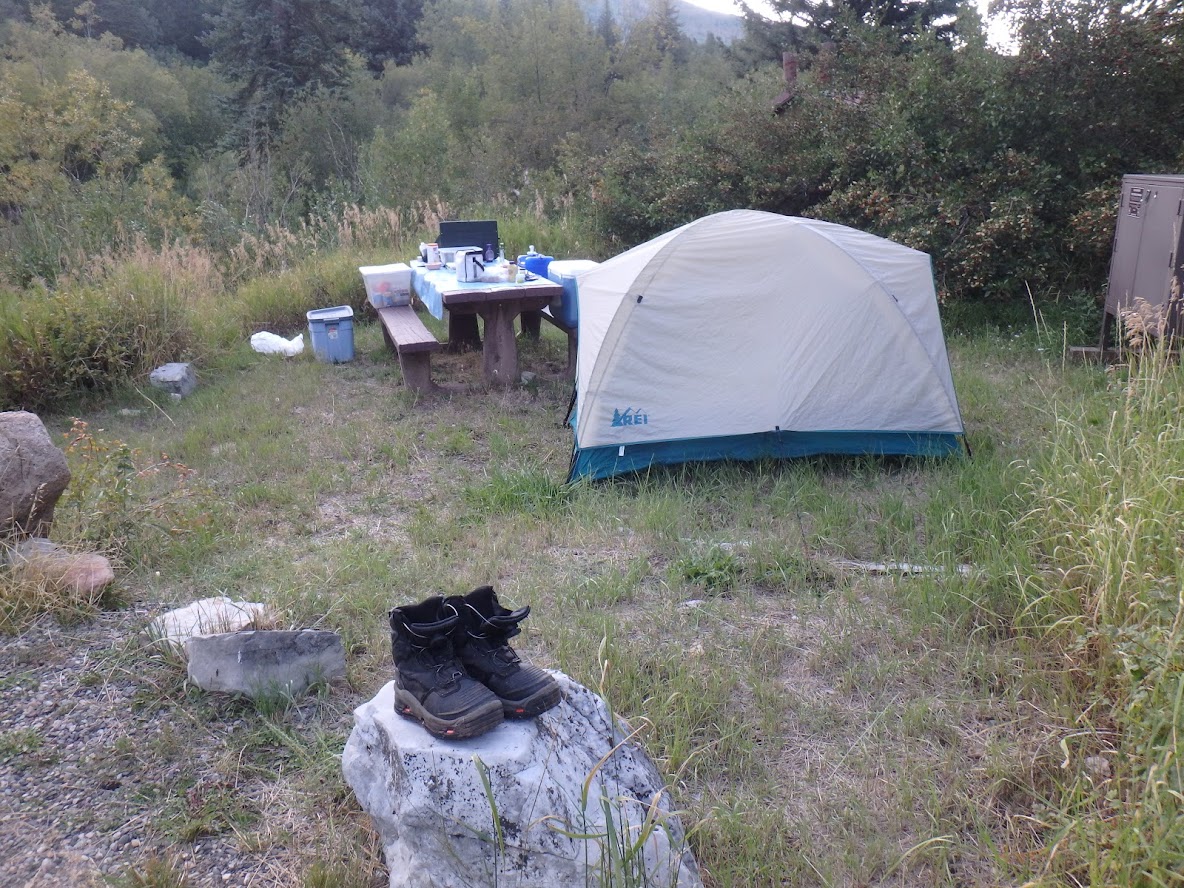 Korkers and Bear Locker in This View