Location: Above the main Elk River

During thirty-seven years of fly fishing I experienced numerous days, where I remained in a state of euphoria for days afterward. As I grow older, however, these occasions are less frequent. Tuesday afternoon, August 4, evolved into one of the increasingly rare times of extreme exhilaration. Normally the circumstances that create such a state of jubilation are a dense hatch, large fish or an abnormally large quantity of fish; but Tuesday’s experience resulted from a different source. 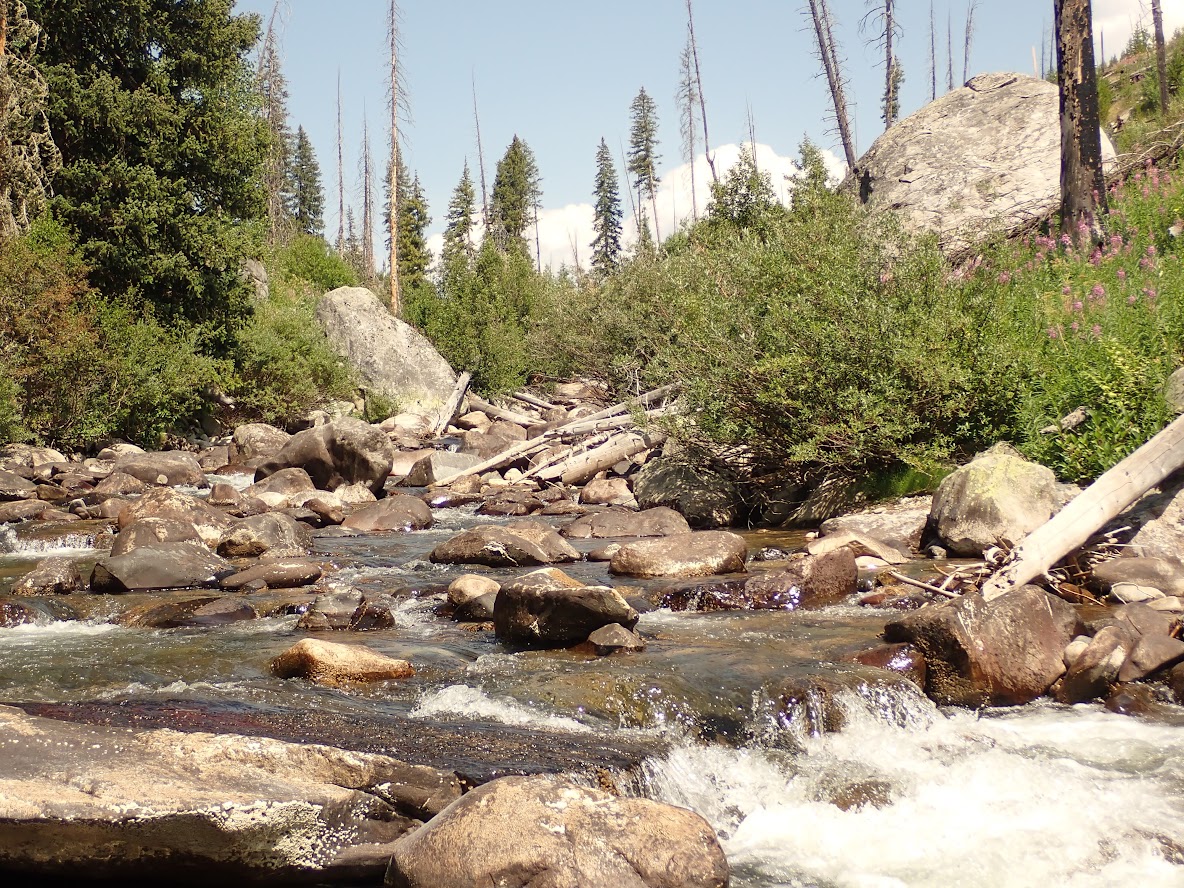 After a disappointing 1.5 AM hours on the Elk River I decided to cut my losses and shifted my attention to the North Fork. I informed Jane that the North Fork was my backup plan should the main Elk fail to deliver on its promise, and at 11:15 I found myself parked at the trailhead parking lot. I hiked the Diamond Park Trail for a considerable distance and then angled to the right at a Y, and a fisherman path delivered me to the river. I suppose the forks are still referred to as rivers, although they approximate a large creek in size. The North Fork was in spectacular shape with cold, clear flows over large boulders and an abundant quantity of deep plunge pools and pockets. The whole scene caused my heart rate to elevate several beats per minute; not a good thing for someone recovering from heart valve surgery. 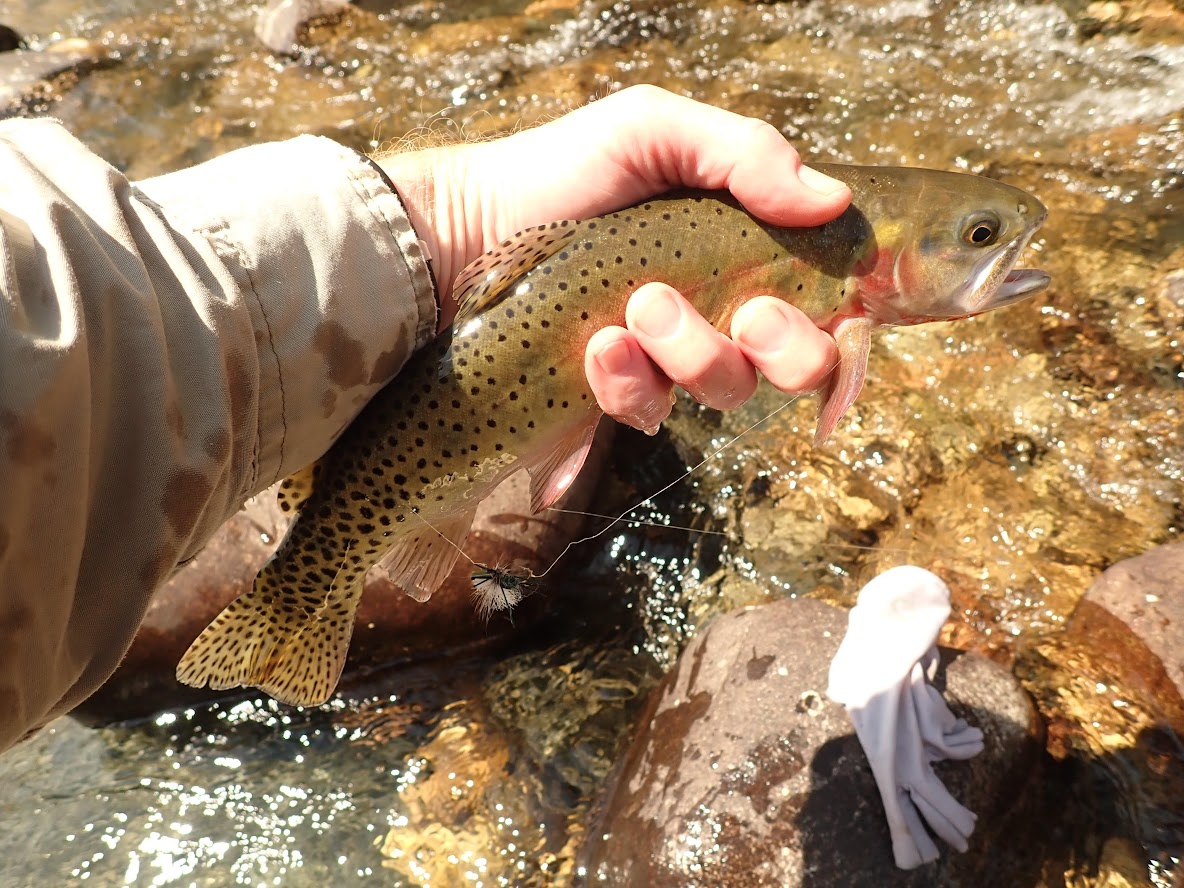 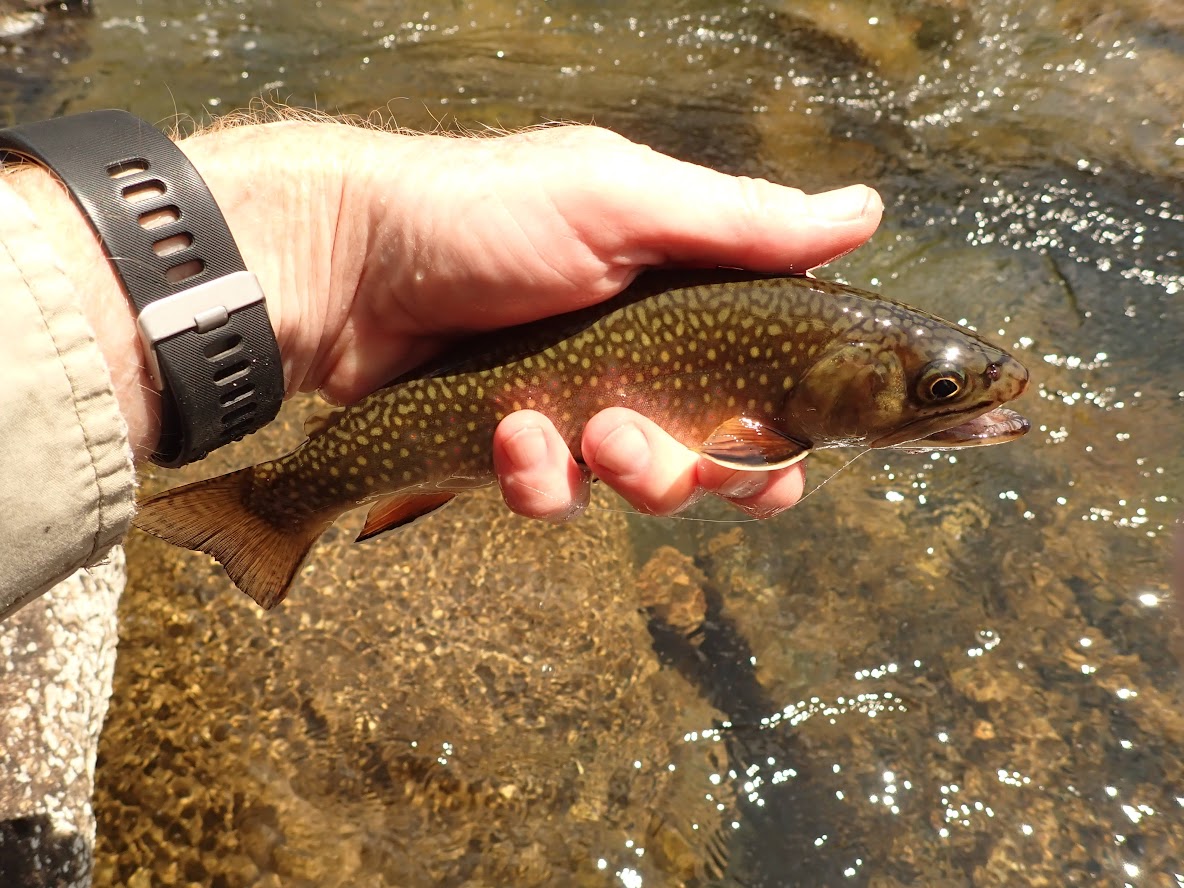 I continued with the double dry fly approach that I initiated on the Elk River, and it included a peacock hippie stomper and olive size 14 stimulator, and I immediately began landing small trout. The fish count surged from one to seven in the thirty minutes before lunch; and my net felt the weight of brook trout, cutbows, and a rainbow trout. I assumed that the North Fork was predominantly a brook trout fishery, so I was pleased with the diversity of species. My optimism soared, as I munched my ham sandwich and observed a tantalizing pool. 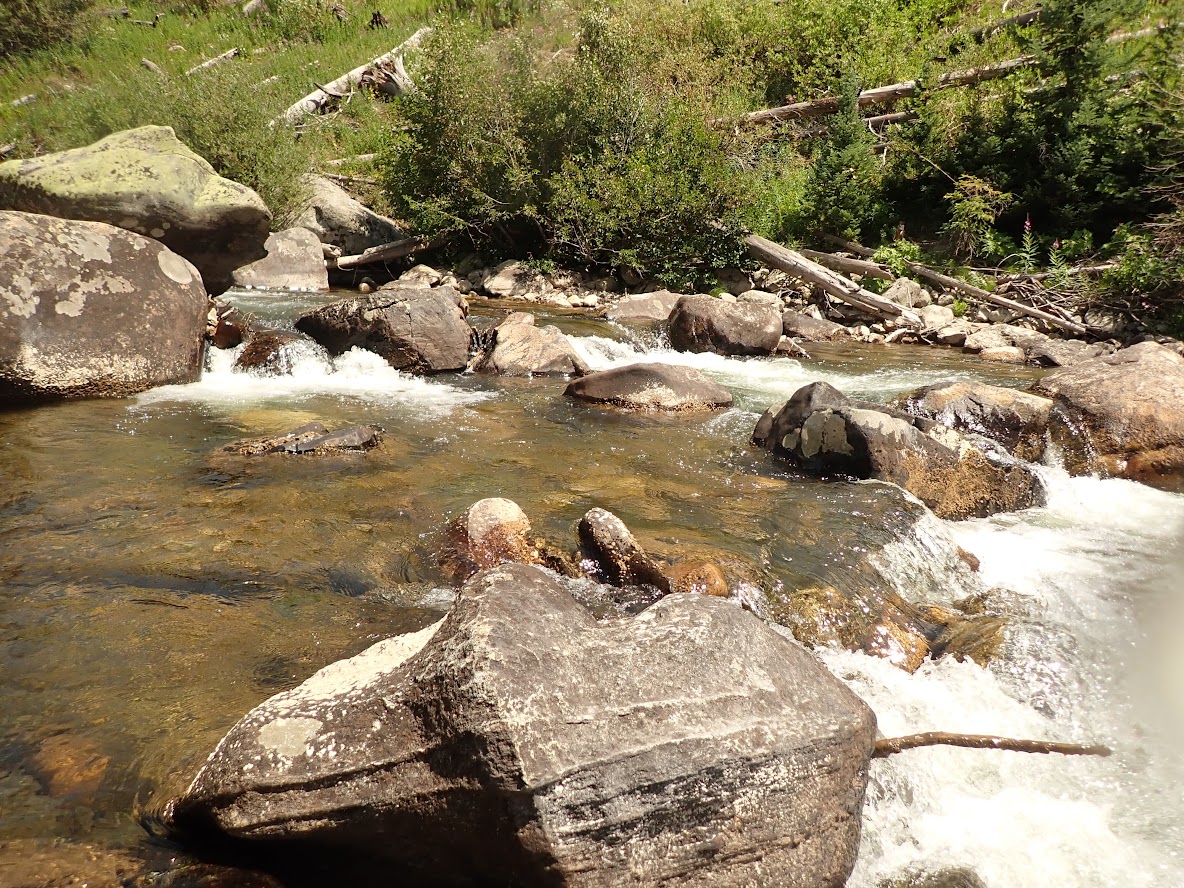 Tail of the Pool 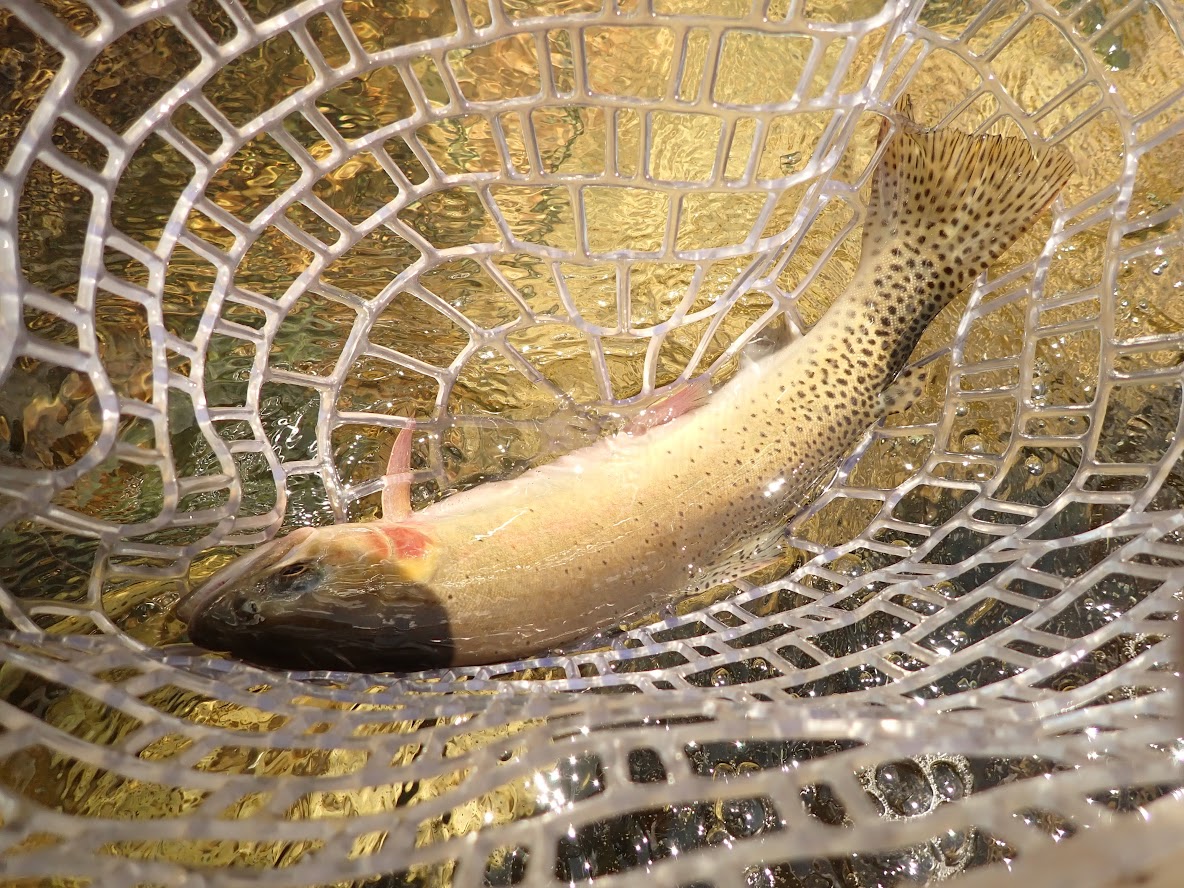 After lunch I progressed upstream for .5 miles and boosted the fish count from seven to twenty-four. I thoroughly enjoyed myself, as I prospected the dry flies through every likely fish holding location. Of the twenty-three fish landed from the North Fork, five were brook trout, three were small brown trout, and the remainder were cutthroats and cutbows plus one or two rainbow trout. I was surprised to realize that I recorded a Colorado trout grand slam. I estimate that sixty percent of the netted trout preferred the olive stimulator, and the remainder favored the hippie stomper. 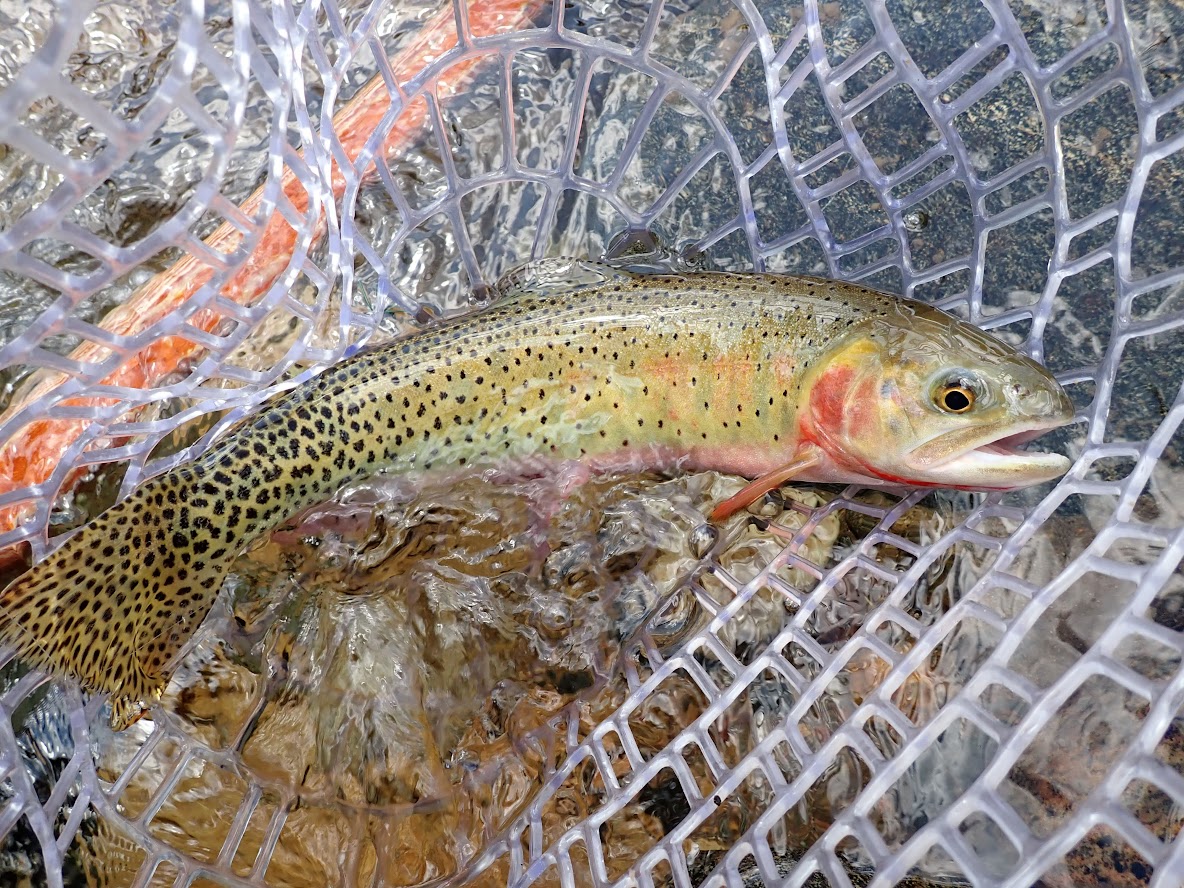 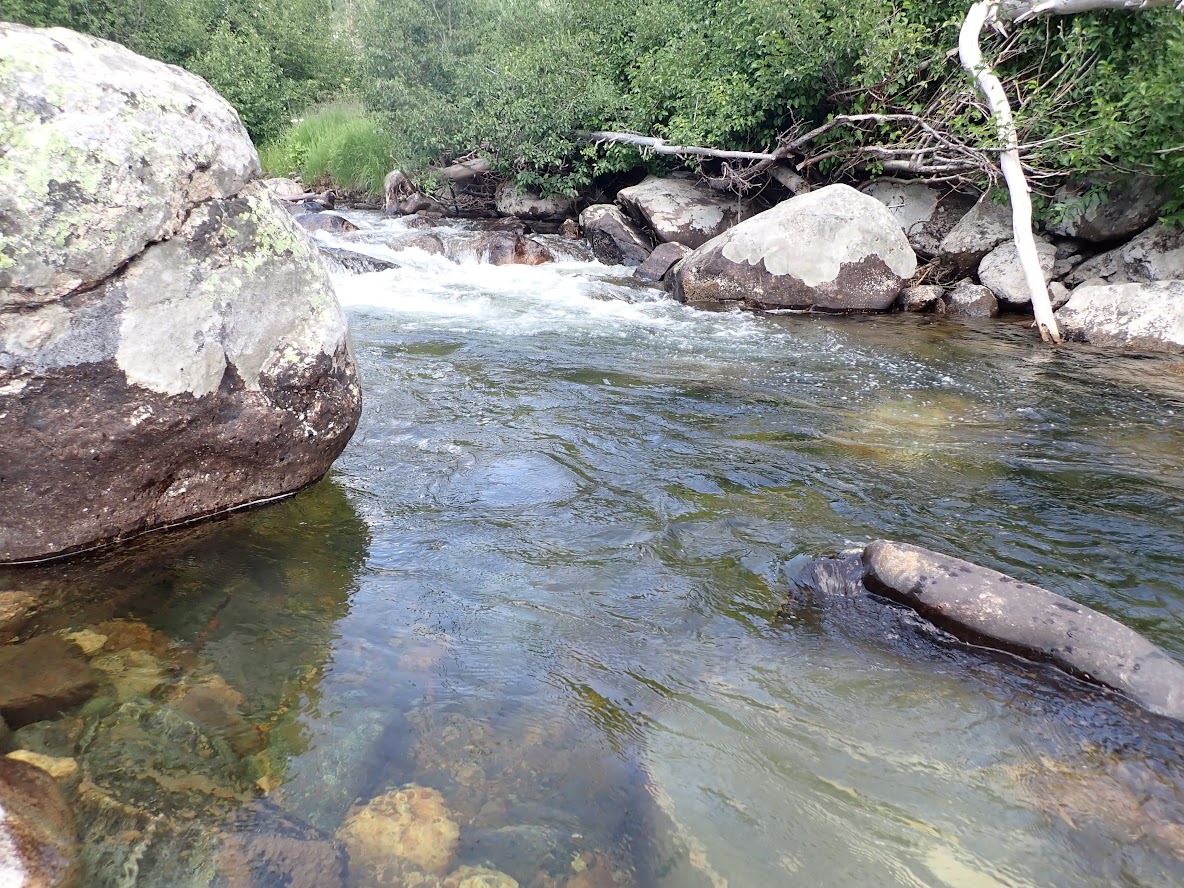 As I migrated farther from my starting point, I began to catch an increasing number of gorgeous cutthroat trout. Quite a few of these prizes were in the twelve to thirteen inch range, and they confidently slashed one of the double dries. I could not have imagined a more perfect scenario than the remote setting, confident rises to large flies, and spectacular native cutthroat trout. I marveled at the coloration of the cutthroats, as they displayed a light olive body with a sparse spot pattern. Bright red cheeks punctuated the subtle beauty, and of course the signature slashes were evident under the jaw. 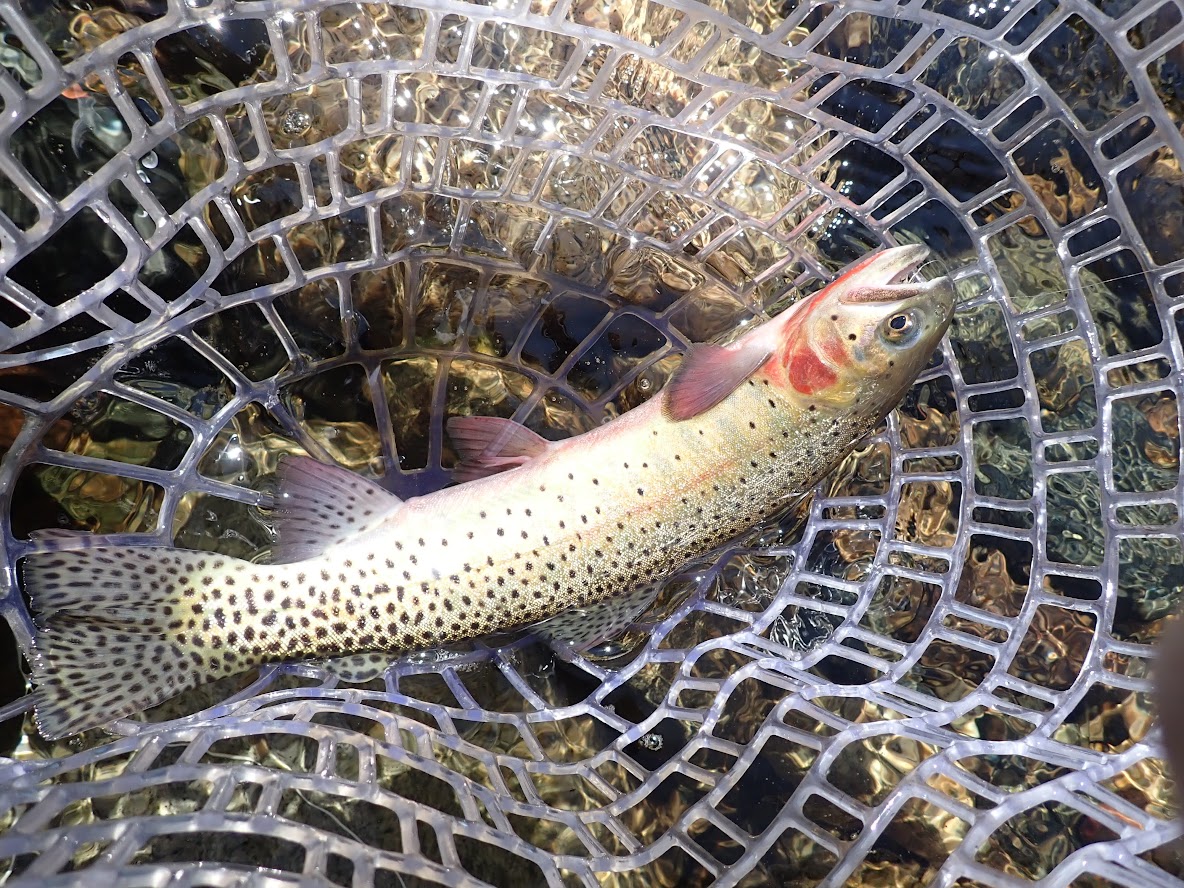 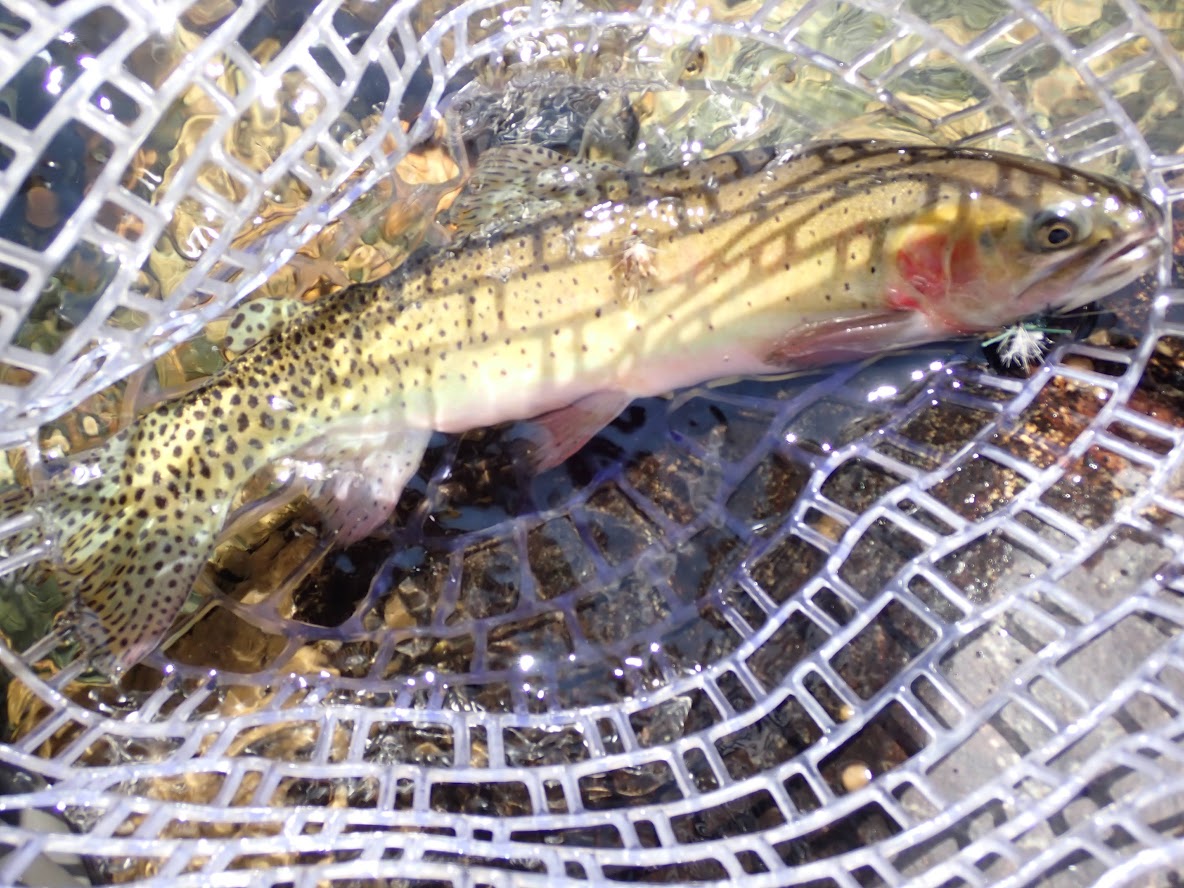 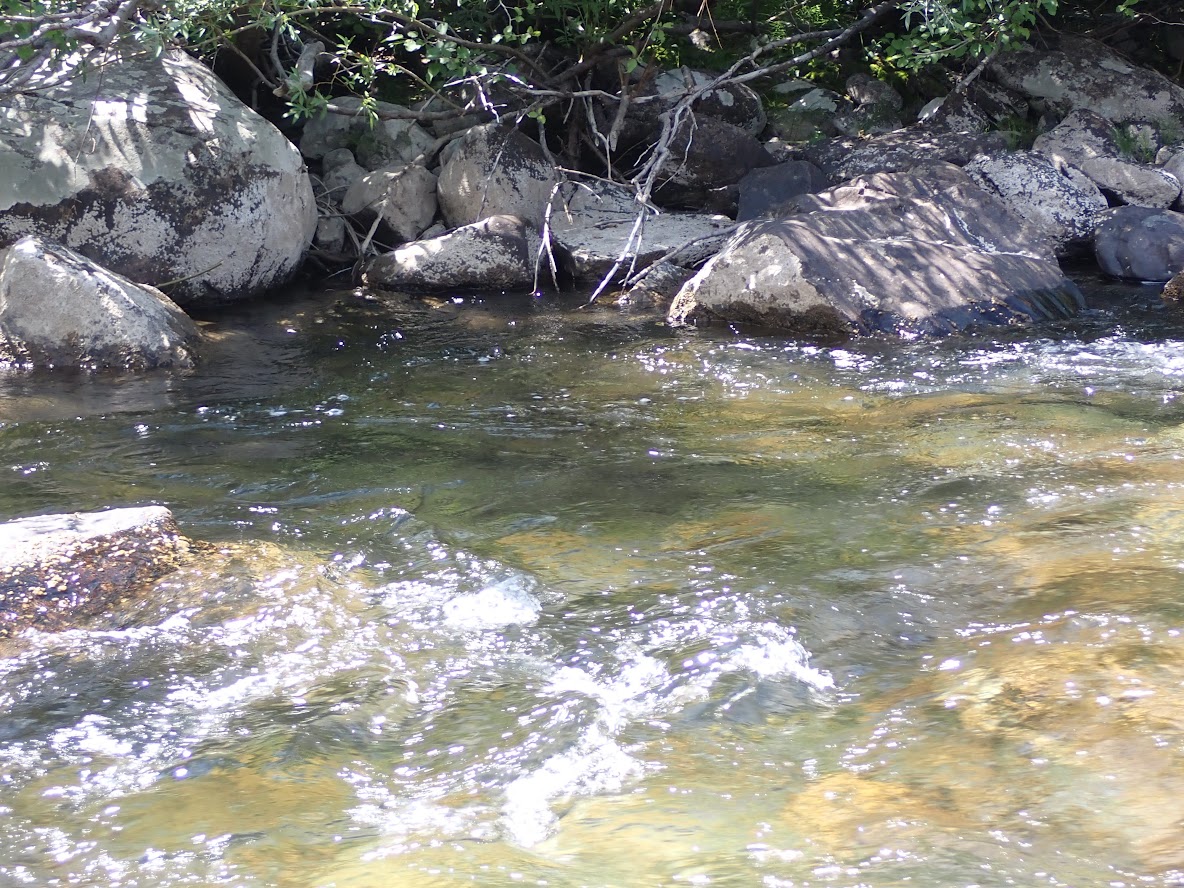 Tuesday afternoon was everything I hoped it would be. I was situated in a remote backcountry stream catching five species of trout. The largest and most impressive fish were the cutthroats, as they displayed their bright yet understated colors. The euphoria that I referred to at the outset stemmed from the rare opportunity to catch native cutthroats. A return visit to the North Fork of the Elk River is a certainty in my mind.