I love fishing green drake dry flies. I’ve encountered them on quite a few streams throughout Colorodao including the St. Vrain Creek, Roaring River, Clear Creek, the Conejos River, Fraser River, South Boulder Creek, Taylor River and the Frying Pan River. The most consistent for me has been the Frying Pan River and it is rare that I don’t encounter them on any trip in August through October. This summer I discovered South Boulder Creek and ran into green drakes on two or three visits to that pretty canyon stream below Gross Reservoir.

I was confident I had the green drake fly puzzle solved until this summer. I locked into making green drake comparaduns using microfibbet tails, medium olive dubbing with a maroon thread rib, and a dark deer hair wing. Mistake number one is locking into something and even worse was convincing myself that I had it figured out.

My problems began in July when I visited the Taylor River below Taylor Reservoir. According to the fly shop fishing report I was catching the tail end of the green drake hatch in the upper river near Lottis Creek Campground. Unfortunately my green drake comparaduns were not fooling the fish and in addition my flies became waterlogged and sank shortly after I tied them on to my tippet. I sorted out my flies at the campground that night and discovered that I had both size 14 and 12 comparaduns. The next day I managed to land a fair number of fish on the comparaduns, but I spent quite a bit of time blotting the abdomen and shaking flies in my dry shake cannister. 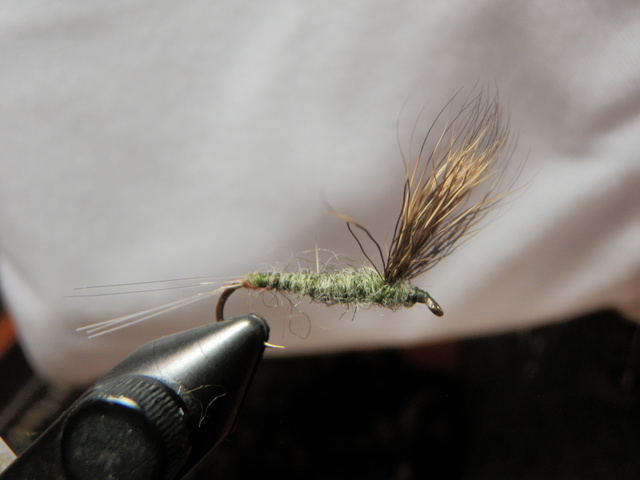 On another outing on South Boulder Creek I ran into the same problem; my flies were too large and they sank too easily. This prompted me to tie a few green drake parachute flies. I tied these on a Tiemco 200R size 12 hook and eagerly transported them along on a trip to the Frying Pan in August. These flies solved the flotation problem, but once again the fish did not show interest in them except for one gullible cutthroat trout. I switched back to the size 14 comparaduns, and these produced nicely during one overcast afternoon near the spring.

I was now at a stage in my winter fly tying where I needed to stock some green drake dry flies. I decided to do some research on the internet before beginning and discovered there are actually three species of western green drakes present in Colorado. One hatches earlier than the others and is imitated with a size 12 fly. The others hatch later in the season and are best matched with a size 14 hook. This probably explains my inconsistent success when I failed to pay close attention to the size of the comparadun I was using. I also watched a YouTube video of a tyer in Oregon making a parachute green drake and noticed that he used five or six moose mane fibers to create a tail that was much thicker than the split microfibbets I was using. 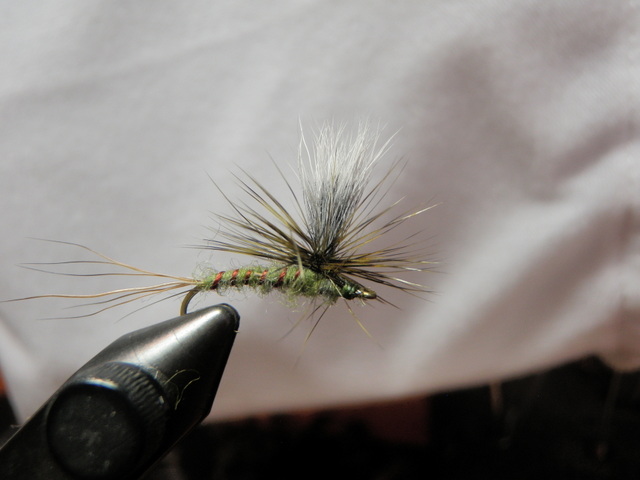 With these observations planted in my brain I sat down and tied eight size 14 parachute green drakes using a moose main bundle for the tail and grizzly saddle hackles dyed dark olive for the hackle. I purchased a nice olive Keough saddle hackle patch at the fly fishing show in January for this very purpose. I’m very pleased with these flies and hope that they will prove effective this summer. Since I already tied three of the larger size 12 paradrakes last year, I plan to produce three additional models so that I have six going into the new season. 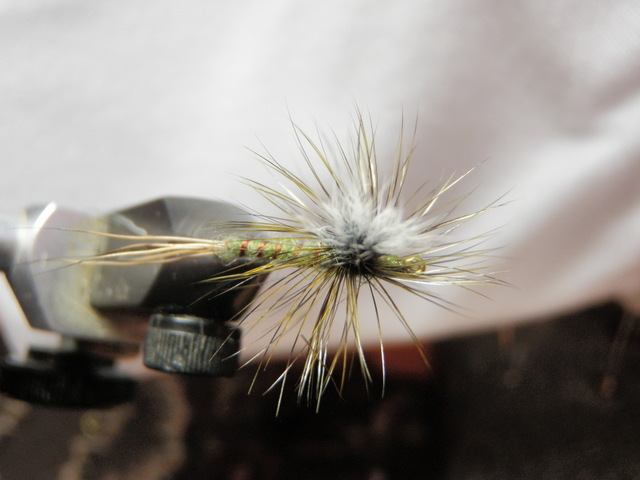 Fishing large dry flies to feeding trout in a cold mountain stream in summer is one of the most enjoyable experiences I can think of. Hopefully I’ll have a few more days like this in my future.