I declared 2016 the year of the green drake, and I made a concerted effort to find green drake hatches. Unfortunately I only met green drakes a few times, and I never made a trip to the Frying Pan River. The Pan is one of my favorite rivers in Colorado, and it produces one of the best green drake hatches, with the added bonus that the emergence spans from July until October. Although I never set a goal to encounter green drake hatches in 2017, good fortune blessed me with a large number of western green drake experiences.

We returned from Canada on Sunday August 27, and various commitments prevented me from resuming my fly fishing wanderings in Colorado. As I reviewed the calendar, I noted a gap on Thursday and Friday just before the Labor Day weekend, so I decided to squeeze in a two day and one night trip to the Frying Pan River. The fishing report on the Taylor Creek website noted that the crowds were down because of the detour around the route 82 bridge in Glenwood Springs. I was skeptical that this annoyance would have an impact on the avid fly fishermen who visit the Frying Pan, but it gave me another reason to commit to the drive.

I left the house at 6:50 on Thursday morning, and in spite of the roundabout detour in Glenwood, I arrived at the Little Maud Campground by 10:30. I cruised the loop and noted that quite a few sites were unoccupied for Thursday night, and I eventually secured site number 5. I removed my water container and deposited it at the campsite, and then I reversed my direction and drove below the dam to a spot in the upper five miles of public water. 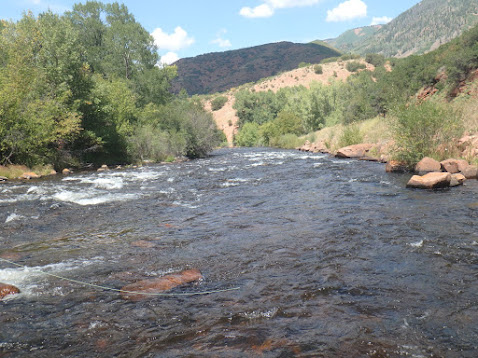 Thursday was a hot day, and the temperature was in the upper seventies when I began fishing at noon. Fortunately a nice cloud cover moved in by 1:30, and this maintained comfortable conditions for the remainder of the afternoon. The flows were 267 CFS, and this proved to be nearly ideal, although crossing the river was a challenge. The number of cars parked along the river, as I drove from the campground to my starting point was lighter than normal, so perhaps the detour was impacting the angler visits to the Frying Pan River.

After I parked, I assembled my Sage One five weight, and then I hiked downstream along the road for .3 mile, until I was just above a no trespassing sign. I entered the river here and began casting with a size eight Chernobyl ant that trailed a salvation nymph and a beadhead pheasant tail. I persisted with this combination for thirty minutes, until I returned to the car for lunch, and the only result of my efforts were a couple empty looks at the Chernobyl.

At the end of lunch I noticed a green drake, so I tried a parachute and ribbed comparadun for a short amount of time with no positive results. Since several fish looked at the Chernobyl earlier, I tested a Jake’s gulp beetle, and this fly placed me on the scoreboard, when a small brown trout in a tiny pocket along the bank snatched it. A couple arrived while I ate lunch, and the male member began fishing one-third of the way between the parking space and the private boundary. Rather than hiking back to the area just above the private water, I cut down to the bank twenty yards below a small island. After the beetle ceased to be productive, I returned to the dry/dropper with a tan pool toy, beadhead salvation, and a beadhead hares ear. These flies began to produce, albeit small fish.

Between 12:30 and 1:30 I tallied eight additional fish to increment the fish counter to nine. A couple ten inch browns crushed the pool toy, and the remainder grabbed the nymphs. Two of the eight fell for the salvation, and the remainder favored the hares ear. The largest of this group was an eleven inch brown that snatched the hares ear, as I began to lift at the end of a deep narrow slot. As usual the elevation of the nymphs at the lip of pockets and the end of deep runs and slots proved to be effective. 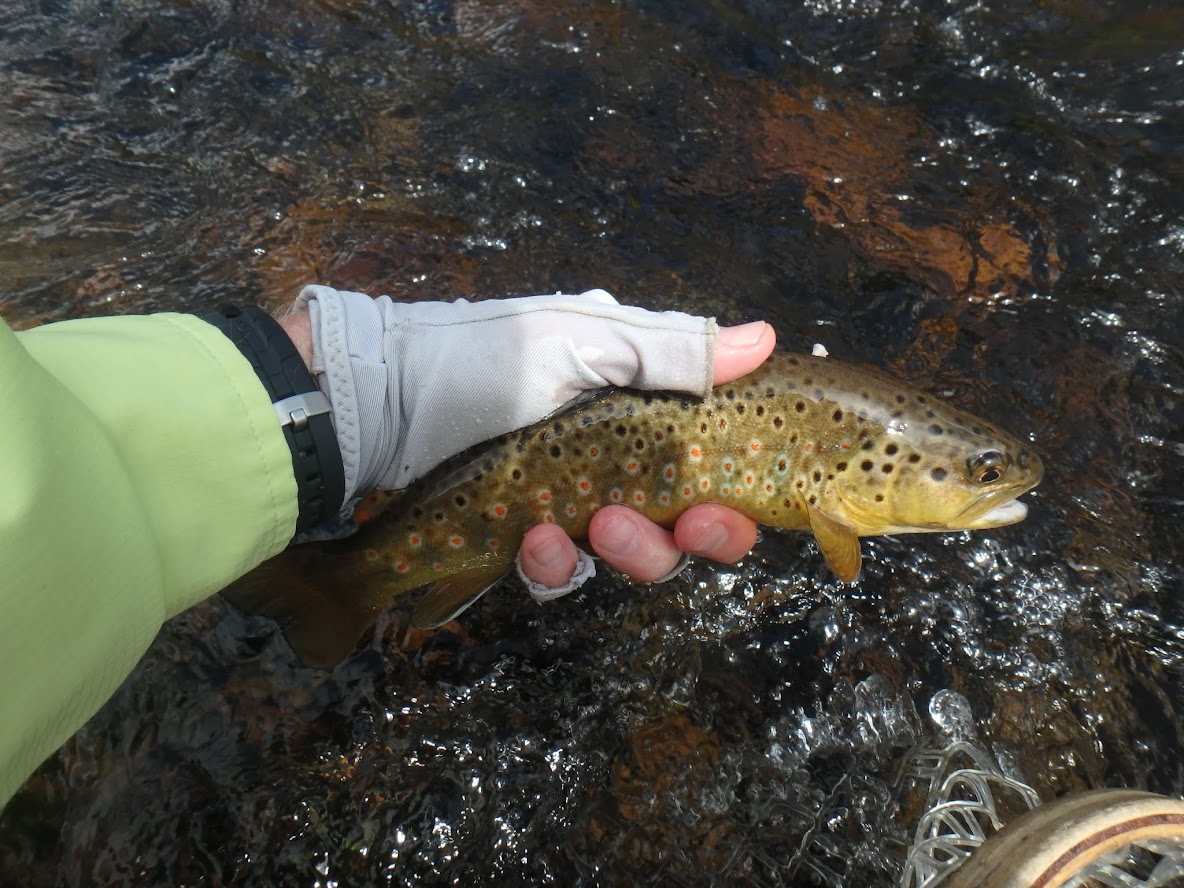 At 1:30 I approached the wide riffle with pockets across from the Santa Fe. This was the position I desired to reach in case green drakes became a factor. Right on cue I spotted two large mayflies, as they floated up from the river. Prior to the Frying Pan trip I loaded my fly box with some size 12 ribbed parachute drakes as well as some Catskill style ties, and I now elected to attach one of the parachutes to my line. Bingo! I began landing fish in rapid fire succession. Initially the small pockets produced small fish, but as I migrated upstream to the prime deep pools and pockets along the right bank, the size increased. Over the course of Thursday I added another twenty-five trout to the fish count to end up at thirty-four. 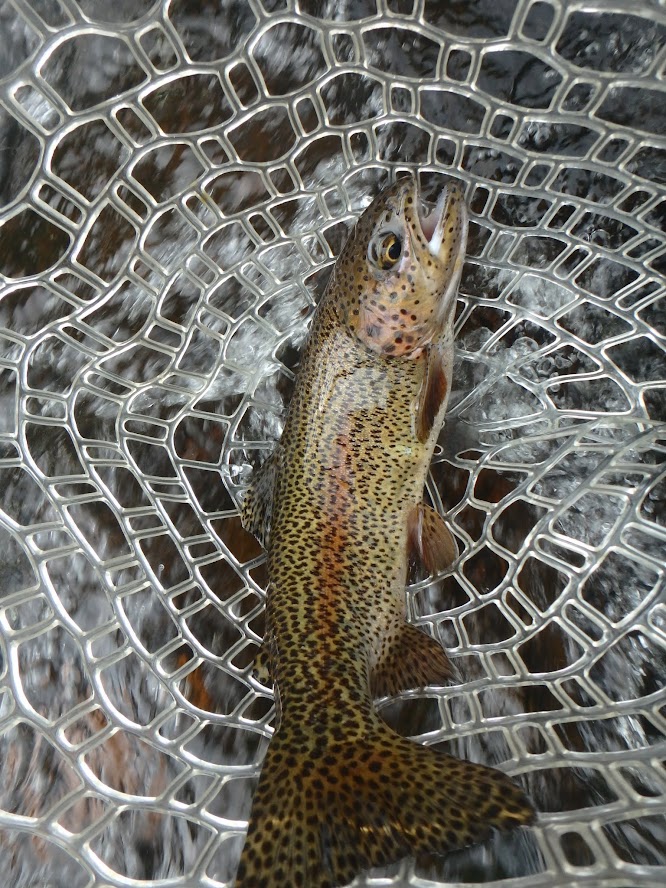 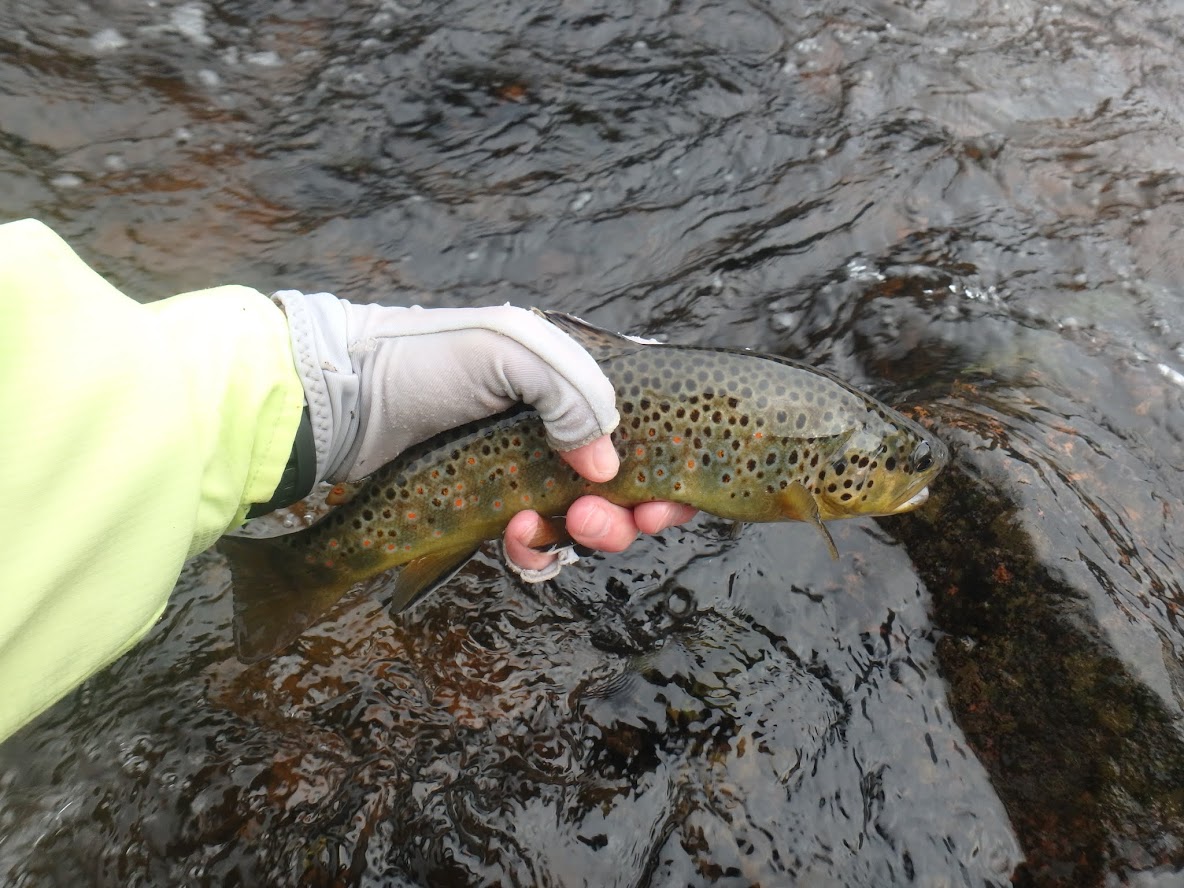 Between 2:00 and 4:00 I was on fire, as nearly every likely spot produced a fish or two. The parachute took me to nineteen, and then I snapped it off on a tree branch. A second parachute continued the streak, until it broke off in a fish. At this point I decided to try a Catskill style, but it produced refusals and a couple foul hooked fish, so I returned to a size 14 parachute. The last parachute was not as effective as the first two, although the hatch waned, and that may have been a contributing factor. The green drake victims included a spunky fourteen inch rainbow and a deeply colored fourteen inch brown trout. A fair number of twelve and thirteen inch browns comprised the afternoon count, but only one additional rainbow rested in my net. 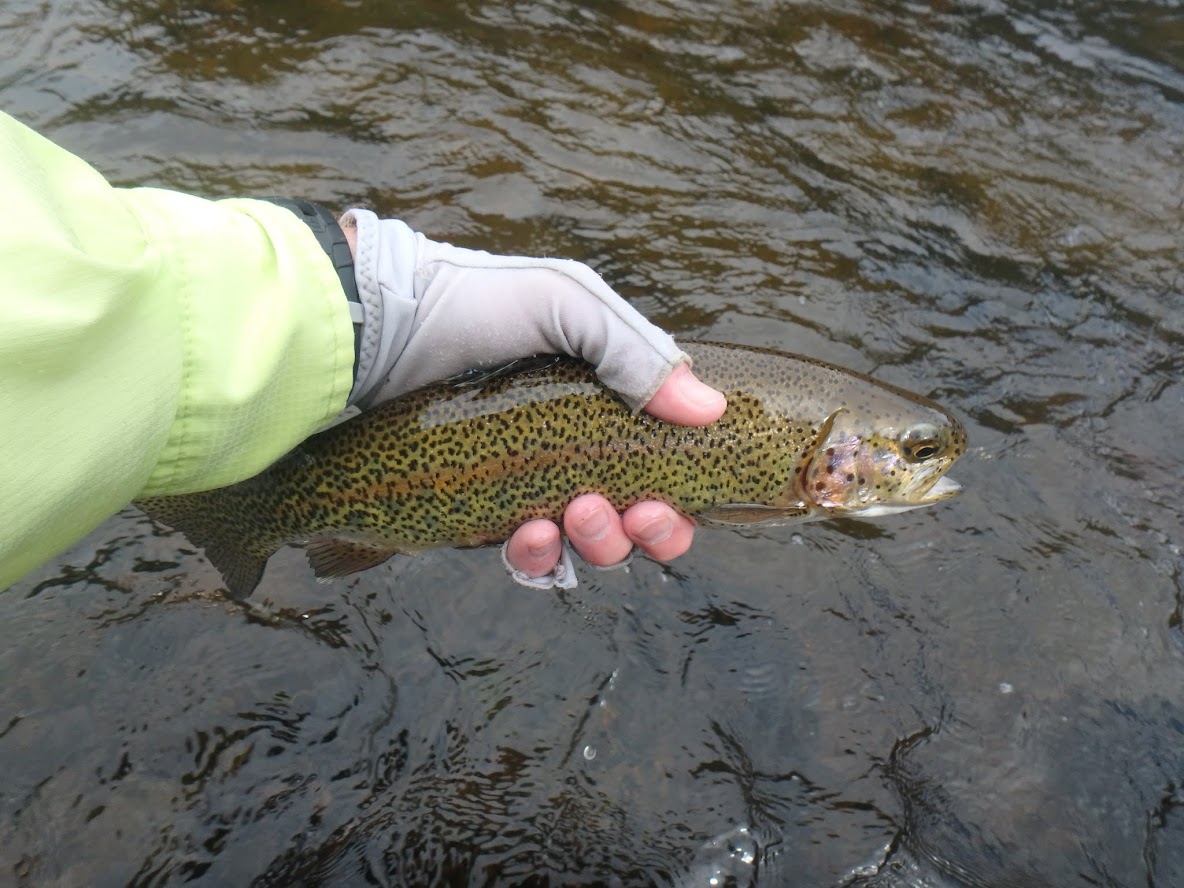 One of the Better Fish on Thursday

Downstream casts were far and away the most productive approach. The trout inhaled the first two parachutes with a great amount of confidence as evidenced by the lack of refusals, temporary hook ups, and foul hooked fish. I was a bit disappointed to not encounter a fifteen inch or greater fish, but it is hard to complain about a thirty-four fish day on the Frying Pan River with nearly constant action on large visible green drakes. Hopefully my boat box contains enough parachute green drakes to get me through tomorrow. The year of the green drake continues into September. 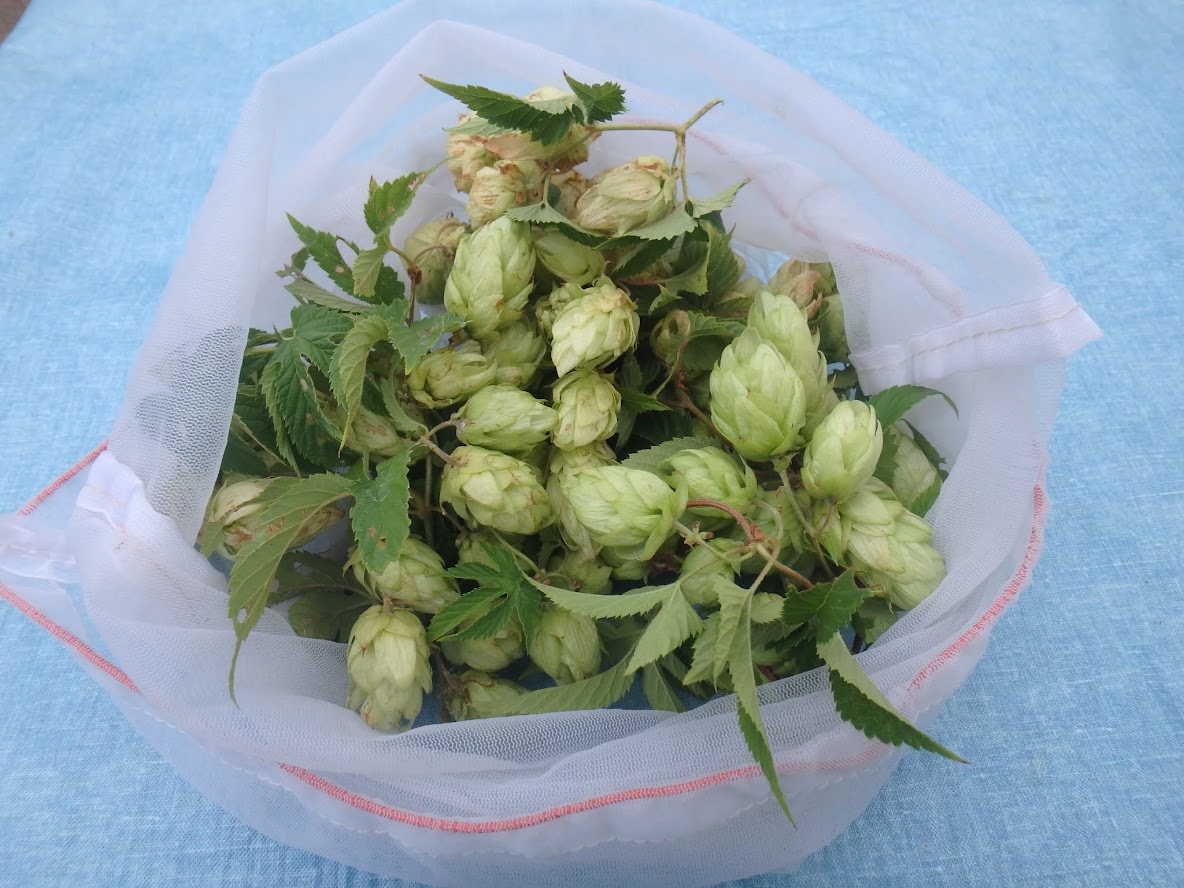