I was on a losing streak having endured two consecutive fishless days in June. The first was on June 20 at Pine Valley Ranch Lake, and the subsequent humbling transpired on the South Platte River on Monday. All the river and stream options continued to post flows that were off the charts, and my attempt to beat the odds with a trip to the South Platte River tailwater was a bust on Monday. My schedule was filled with appointments for the remainder of the week, and I felt a strong desire to fit in one more day of fly fishing. My thoughts again turned to stillwater options reasonably close to Denver. Lakes offered dependability in the form of clear water and the absence of dangerous high currents.

I made a list of recently stocked lakes within a convenient range of Denver, CO prior to my trip to Pine Valley Ranch Lake, and I referred to it once again, as I researched options for Tuesday. Flatiron Reservoir stood out as a place of interest. It is located northwest of Bethoud, CO and is part of the Larimer County Parks system. Carter Lake and Pinewood Reservoir are part of the same system. I decided to personally explore Flatiron Reservoir on Tuesday, June 25.

I arrived at the pay station by 10:30AM, and I was pleased to discover, that I could use my credit card to purchase a one day use permit for $9. The fee seemed a bit high compared to other Colorado recreation areas, but I was willing to gamble once to determine what Flatirons had to offer. After I paid my fee, I turned right on a rough gravel road and proceeded to a crude parking lot, where I spotted a sign that pointed to fishing access. I knew from studying the online map, that fishing was permitted along the southeastern shoreline as well as the opposite shoreline next to the campground. I owned the only vehicle in the parking lot, and I was pleased with this circumstance, although I also feared that this was an indicator of poor fishing. 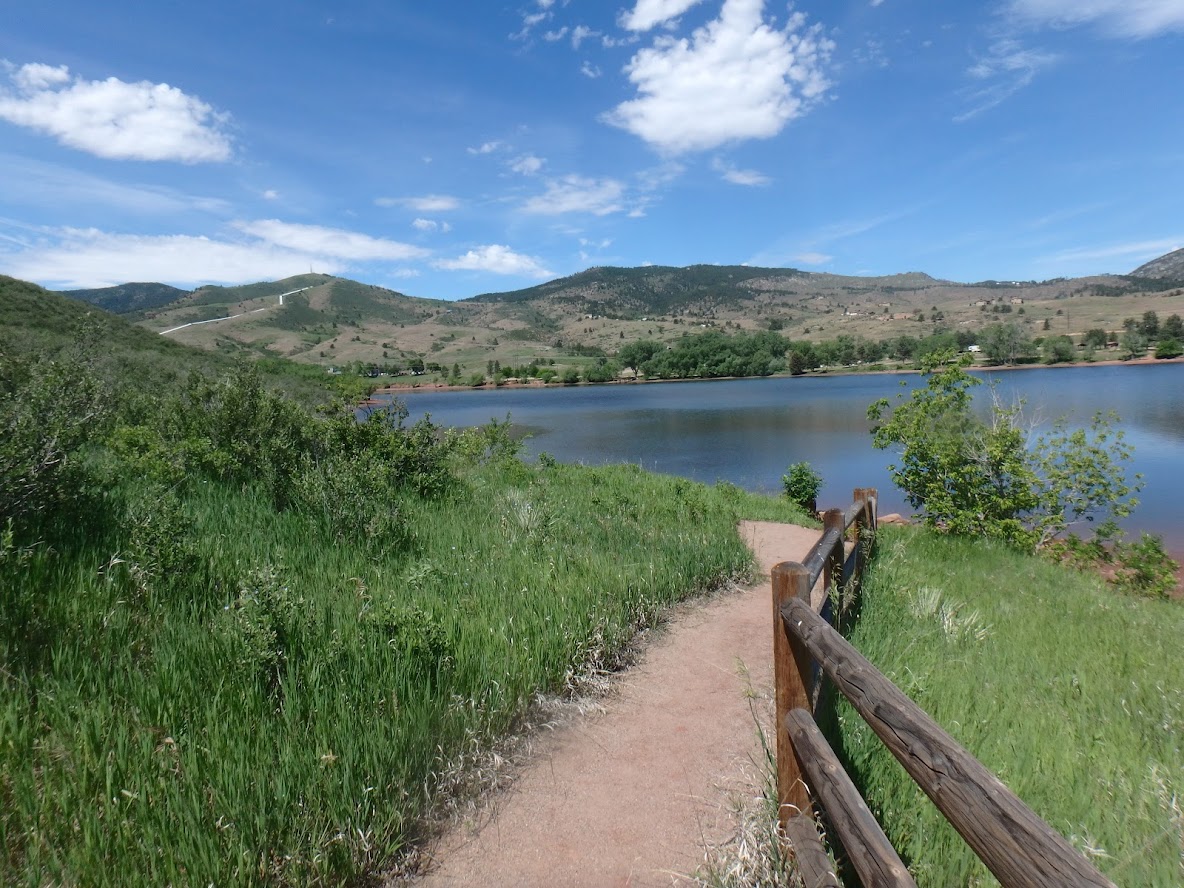 I pulled on my brand new warranty replacement waders and rigged my Sage four weight and walked up the worn path, until I was next to the earthen dam. Fishing from the dam was off limits, so I descended a packed red earthen path and approached the lake in the extreme northeastern corner. Several clusters of fishermen occupied places on the opposite shore, but I had the entire “fishing access” beach to myself. My stillwater fishing skills are still under development, and I pondered where to begin fishing in this large body of water. 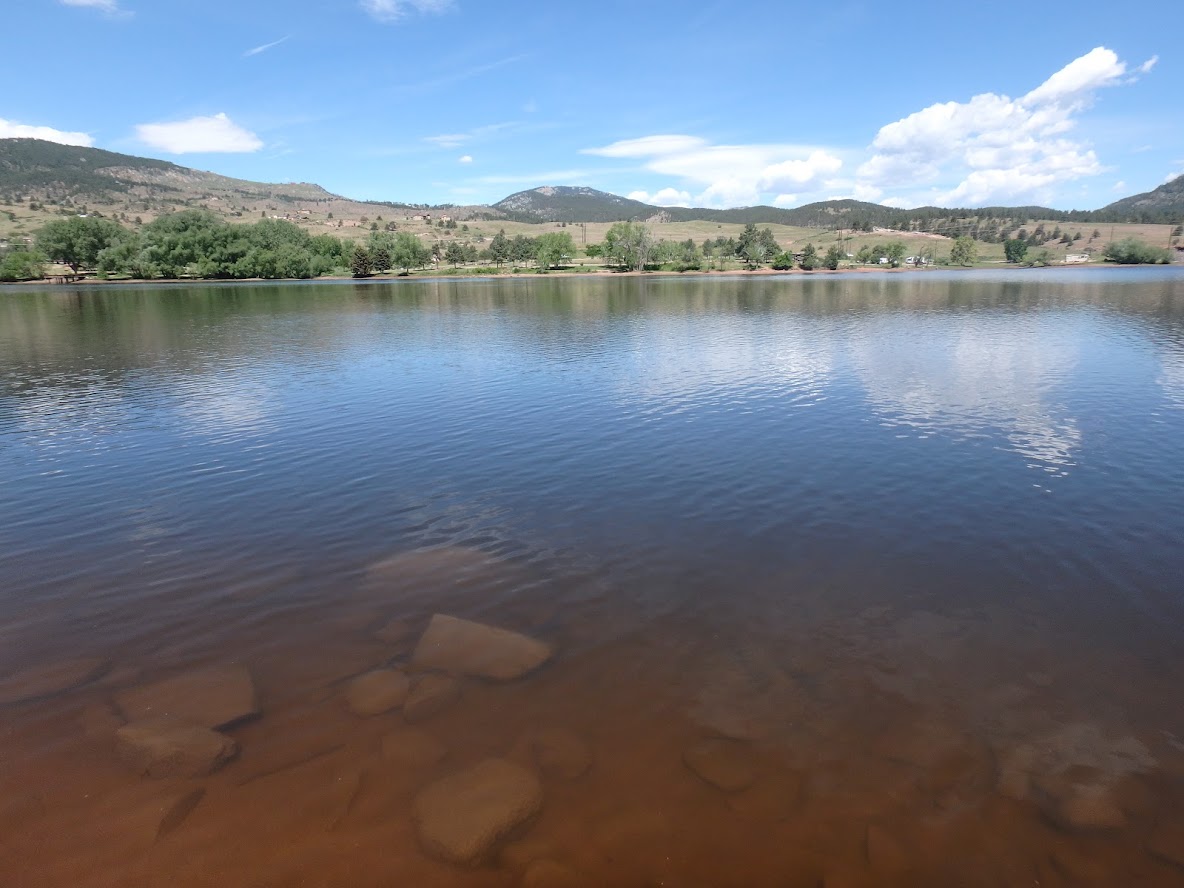 Mirror Near the Start

I observed for a short time, and the lake was relatively smooth, so I gambled that a few rises would reveal the whereabouts of fish. I tied a size 16 gray deer hair caddis to my tippet and hooked it to the rod guide, and then I ambled along the red sand beach for forty yards, while I scanned the water for signs of fish. Eventually a pair of rings on the surface caught my attention, and I flicked a few casts to the areas of feeding activity. This lasted for fifteen minutes, before some clouds blocked the sun, and this in turn prompted successive breezes that ruffled the surface of the lake.

Rather than wait out the clouds and the air movement, I changed tactics and tied a beadhead black woolly bugger to my line followed by a size 12 beadhead prince on an eight inch dropper. I cast and stripped this two fly combination for the next forty-five minutes, until I paused for lunch, and I managed a temporary connection with one fish and then guided a ten inch rainbow trout into my next. I celebrated the end of my losing streak and snapped a photo or two as proof of my stillwater breakthrough. The landed rainbow trout snatched the woolly bugger twenty feet from my position on the beach. 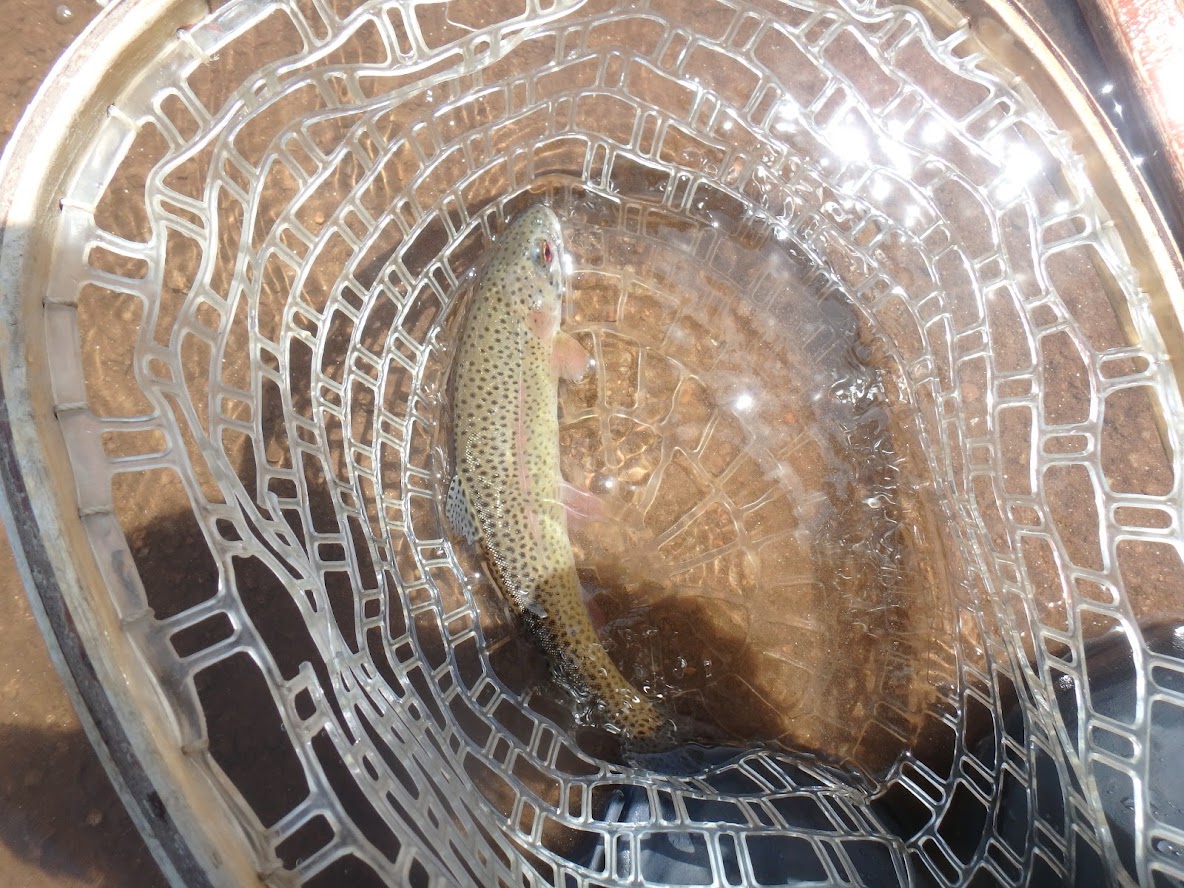 During the morning session I snapped off the prince nymph on an underwater obstruction, and I replaced it with a go2 sparkle pupa. Between 12:15PM and 2:45PM I progressed in a southerly direction along the shoreline and repeatedly cast the two fly combination into the depths of the lake. Some trees, bushes and rocks behind me dictated cautious backcasts, and I adopted the practice of casting at a forty-five degree angle. I plunked fifty foot casts on an angle and then took three lateral footsteps, while I counted off twenty seconds to allow the flies to sink, and then I stripped the flies with rapid twelve inch pulls. I repeated this cycle time after time, until I reached the southeastern corner of the lake. 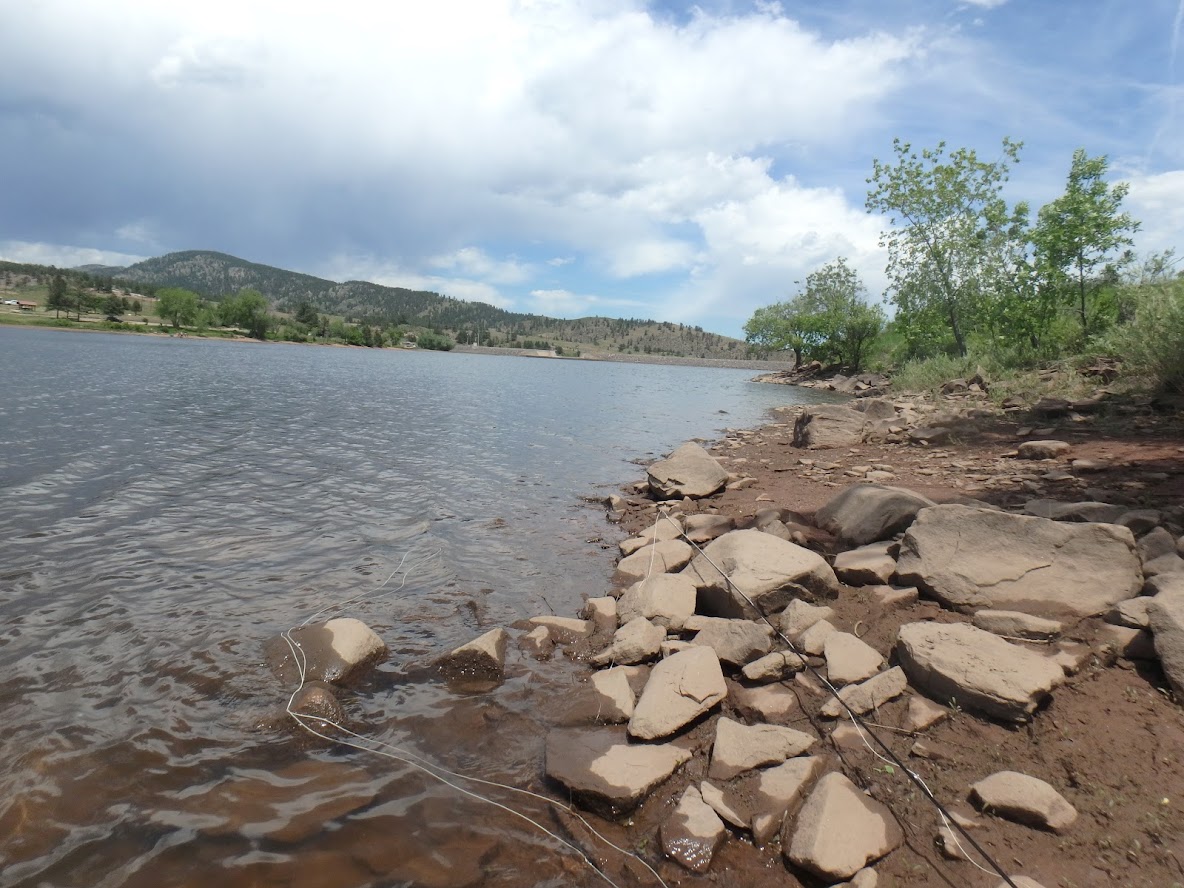 I Covered This Shoreline

Shortly after lunch I inspected my flies and noted that the go2 sparkle pupa hook was missing its point. Just prior to this I noted a blue damsel fly, as it fluttered over the water, so I used this as justification to tie a Charlie Craven wiggle damsel to my line. The wiggle damsel proved effective on the lakes in Patagonia, so why not test it in Flatiron Reservoir? My hunch was a winner, and I moved the fish count from one to six during the early afternoon, as the rainbow trout slashed the damsel nymph. I would not describe this as white hot action, but the takes were consistent enough to support the repetitive cast, step and strip game. All the landed trout during Tuesday’s outing were rainbows in the nine to thirteen inch range. 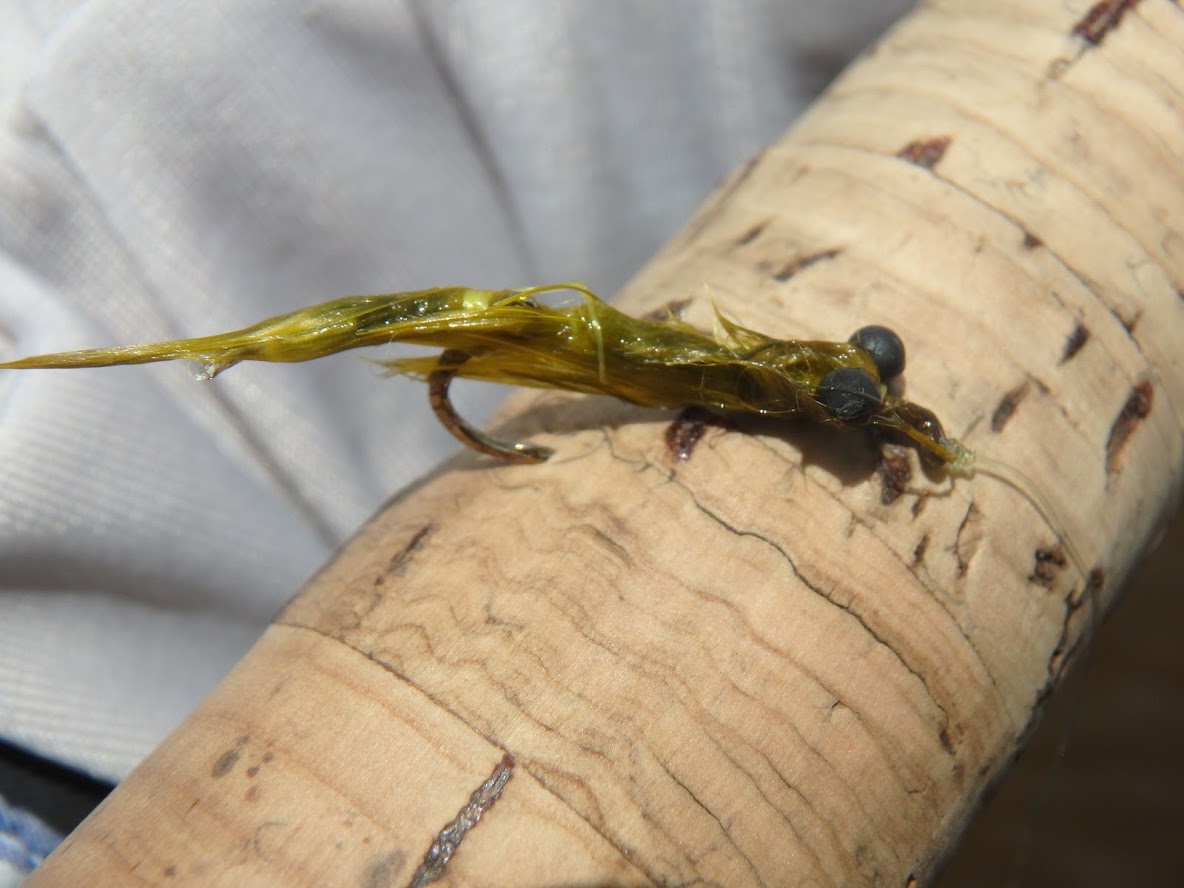 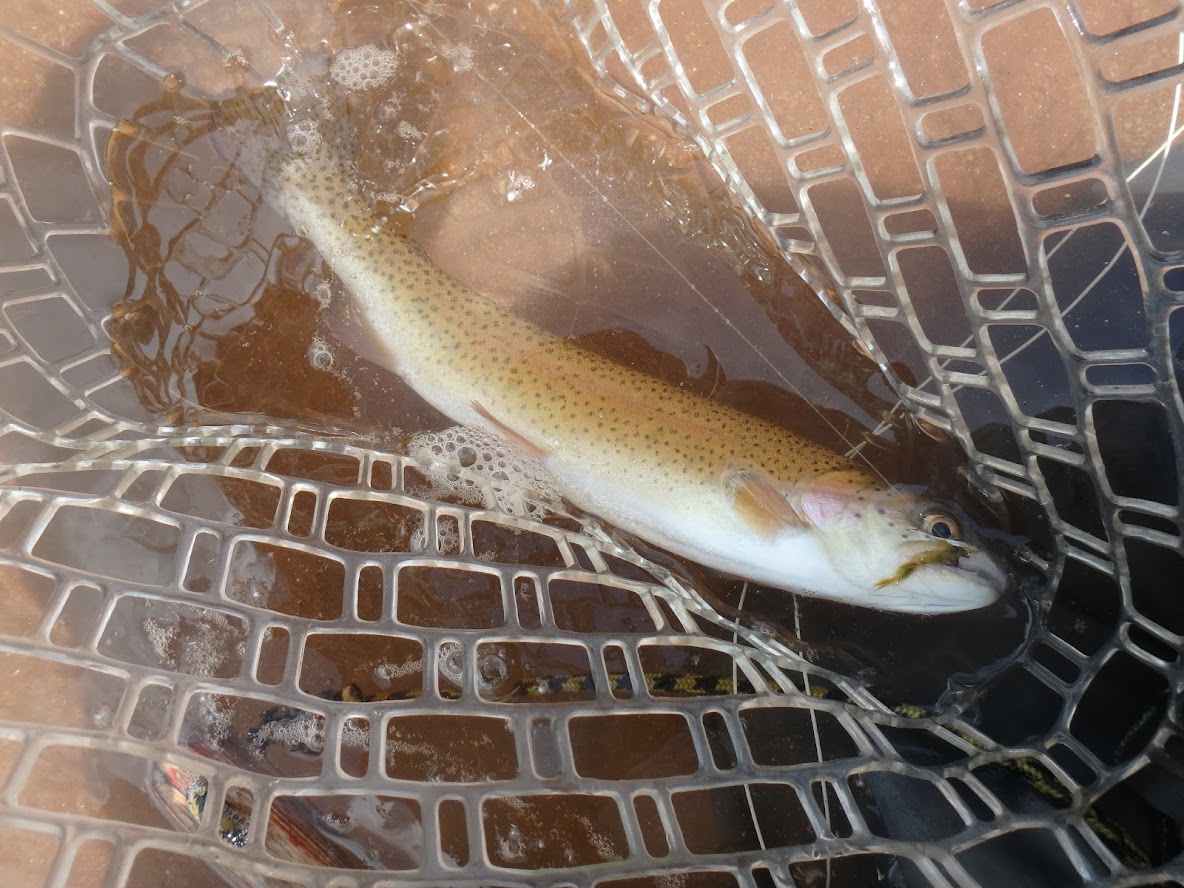 Damsel in the Lip

When I reached the southwest corner of the lake, I climbed a short path to a two track lane that had not been used for awhile as evidenced by the overgrown weeds. I hiked back to the dam and decided to cover the section that I skipped, when I first arrived. I was surprised to encounter a young couple, as they inflated their kayak, and this puzzled me, since I read that no boating or swimming was permitted. I decided not to pry into their affairs and walked a courteous distance beyond them to resume my casting.

I repeated the cast, step, count and strip routine and landed the sixth trout of the day by 2:45PM. At this point the intermittent clouds disappeared, and the sky was pure blue, and this in turn created a very still atmosphere. The smooth surface of the lake in these conditions assumed the appearance of a mirror, and random surface dimples began to appear along the shoreline. My arm was very tired from chucking the streamers and lead, and I was bored by the repetitive routine, so I decided to try a dry fly during my remaining time on the lake. 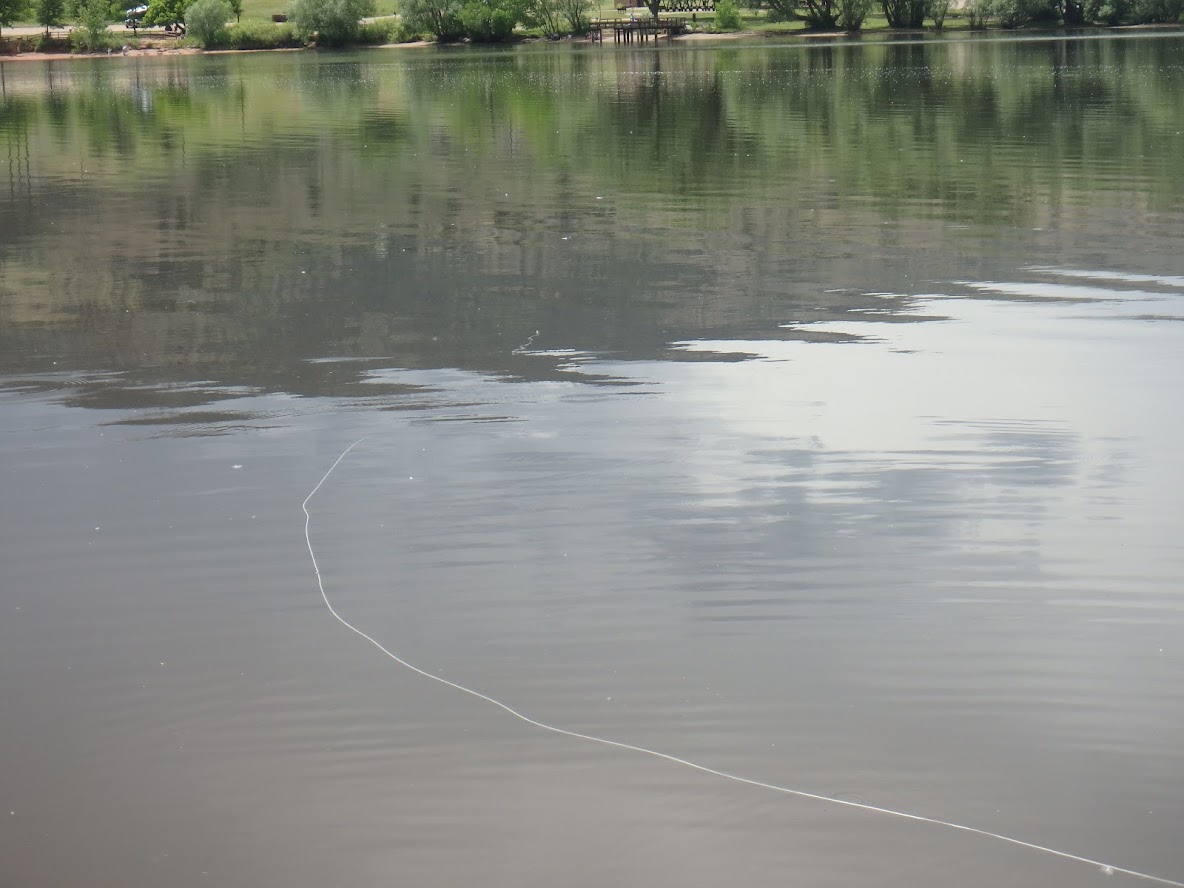 Parachute Adams Out There

I removed the split shot, woolly bugger, and damsel nymph and dug a size 22 parachute Adams from one of the cylindrical canisters that I carry in the zippered pocket in my wader bib. I added some 5X for a finer more supple tippet and then knotted the Adams to the line. Fly fishing on Flatirons Reservoir now became a game of cast and wait. When I spotted a dimple and ring on the surface, I fluttered a cast to the vicinity, and then waited in hopes that the underwater eater would find my offering. Sometimes the wait extended for three or five minutes, before the slight drift caused me to recast.

On one of these interminable waits I was shocked when a trout darted to the surface and consumed the Adams. I was attentive enough to respond with a lift, and I connected for a split second, before the feisty feeder escaped. Despite my disappointment over the lost opportunity, I scanned the shoreline farther south, and I was pleased to notice another series of random rises. I moved fifteen yards, and renewed my quest for dry fly success. 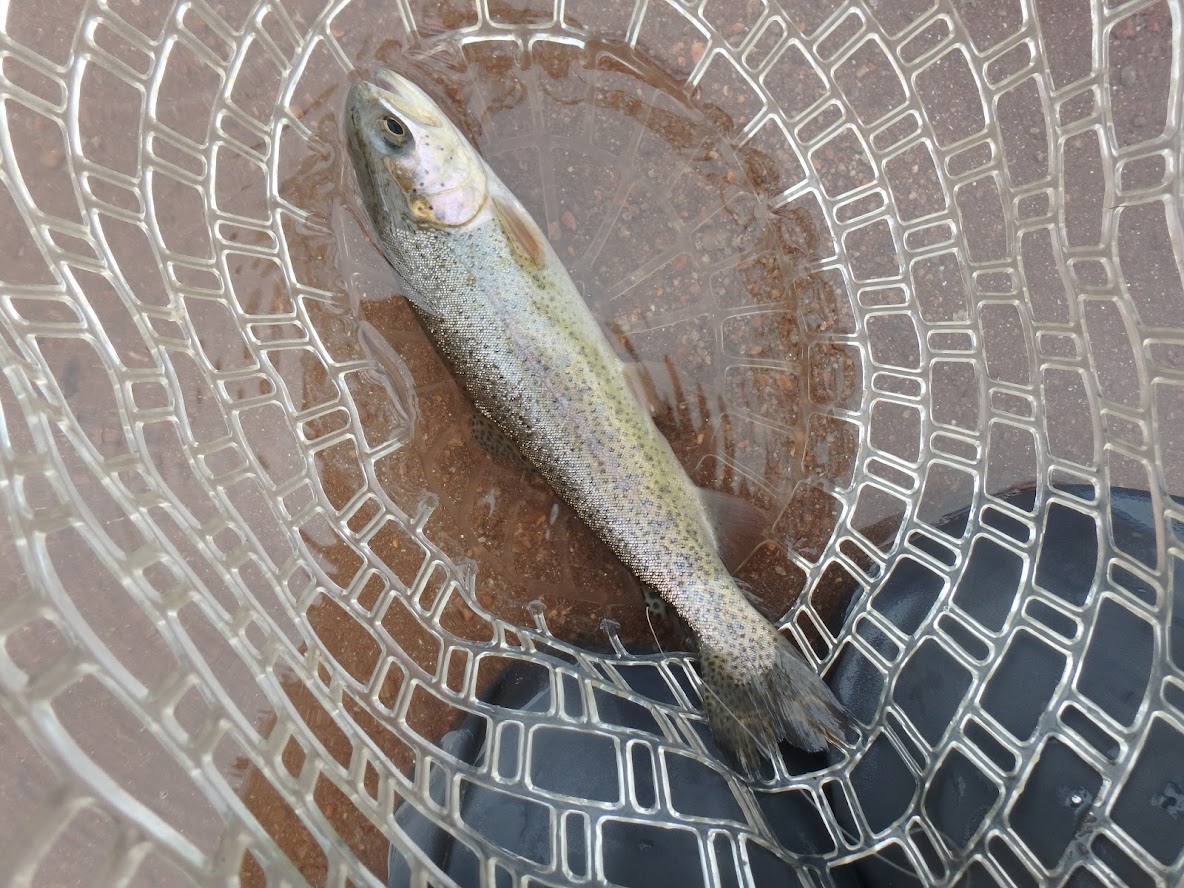 Finally around three o’clock another lake resident created a bulge under my small dry fly, and this time I set the hook and battled a twelve inch rainbow into my net. A brief celebration with myself ensued, and then I released number seven to return to its normal life. With this small victory in hand, I hooked the fly to my rod guide and returned to the car and ended my exploration of Flatirons Reservoir. 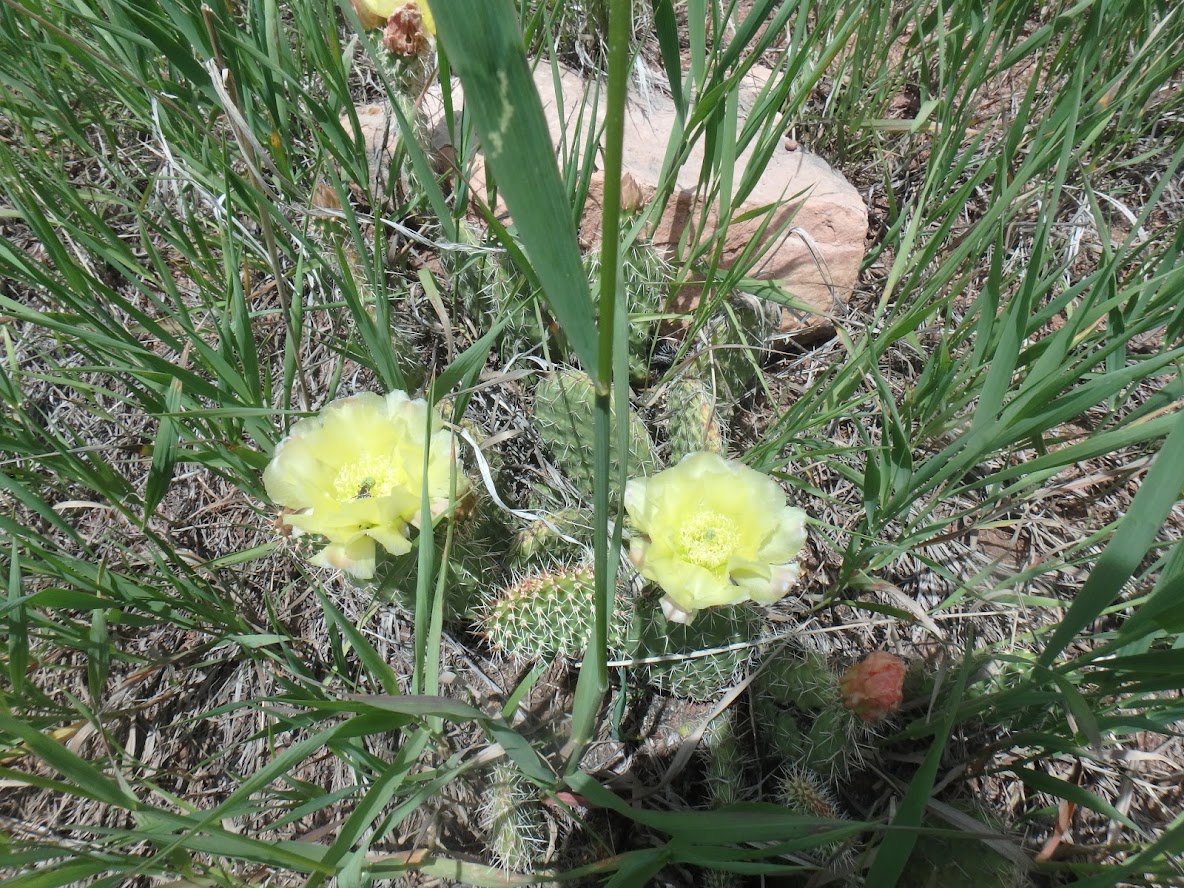 All in all Tuesday was a nice day. I broke my losing streak and landed seven rainbow trout in four hours of fishing. I managed to fool one on a dry fly, and I rediscovered the effectiveness of the wiggle damsel. Lake fishing will likely be my only option for the next week or two, as I wait for the rivers and streams to drop to manageable levels.