After an average day on Clear Creek on Wednesday, I yearned to fish some bigger water with the opportunity to land some larger fish. The Arkansas River near Salida jumped into consideration, and I spent an hour reading posts on this blog from trips to the Arkansas during the late September and early October time period. The description of a trip last autumn sealed the decision, and I made plans to travel to the Arkansas River on Friday, September 27. I even formulated a strategy that capitalized on knowledge gained from previous trips. The plan incorporated line configuration and a sequence of flies that took advantage of the time of year.

After I completed my research on this blog, I decided to check the stream flows and fly shop reports. Streamflows were ideal with cubic feet per second consistently in the 280 range. When I checked the ArkAnglers river report, however, I was disappointed to learn that Bighorn Sheep Canyon was dirty near Salida and downstream to Rincon Campground. The sedimentation resulted from in-stream work on the Salida river park. This was the exact area, that I targeted for my fall fishing trip, and I did not wish to undertake a three hour drive only to encounter off-color water. Many other options existed without the risk of murky conditions.

I reconsidered my options and decided to return to a backcountry creek that rewarded me with hours of excellent fishing in two trips this summer and one last year. I was certain that the flows were near seasonal levels, and that clarity would not be an issue.

I arrived at the trailhead on Friday morning at 9:30, and I climbed into my waders and assembled my Orvis Access four weight, since I was fishing a relatively small mountain creek with plentiful brush and overhanging branches. The air temperature in the parking lot was around sixty degrees, so I passed on an extra layer and relied on my raincoat should temperatures remain on the cool side. A 1.1 mile hike positioned me in the cold clear flows of the mountain creek, and I began my day with a peacock hippie stomper trailing an iron sally. 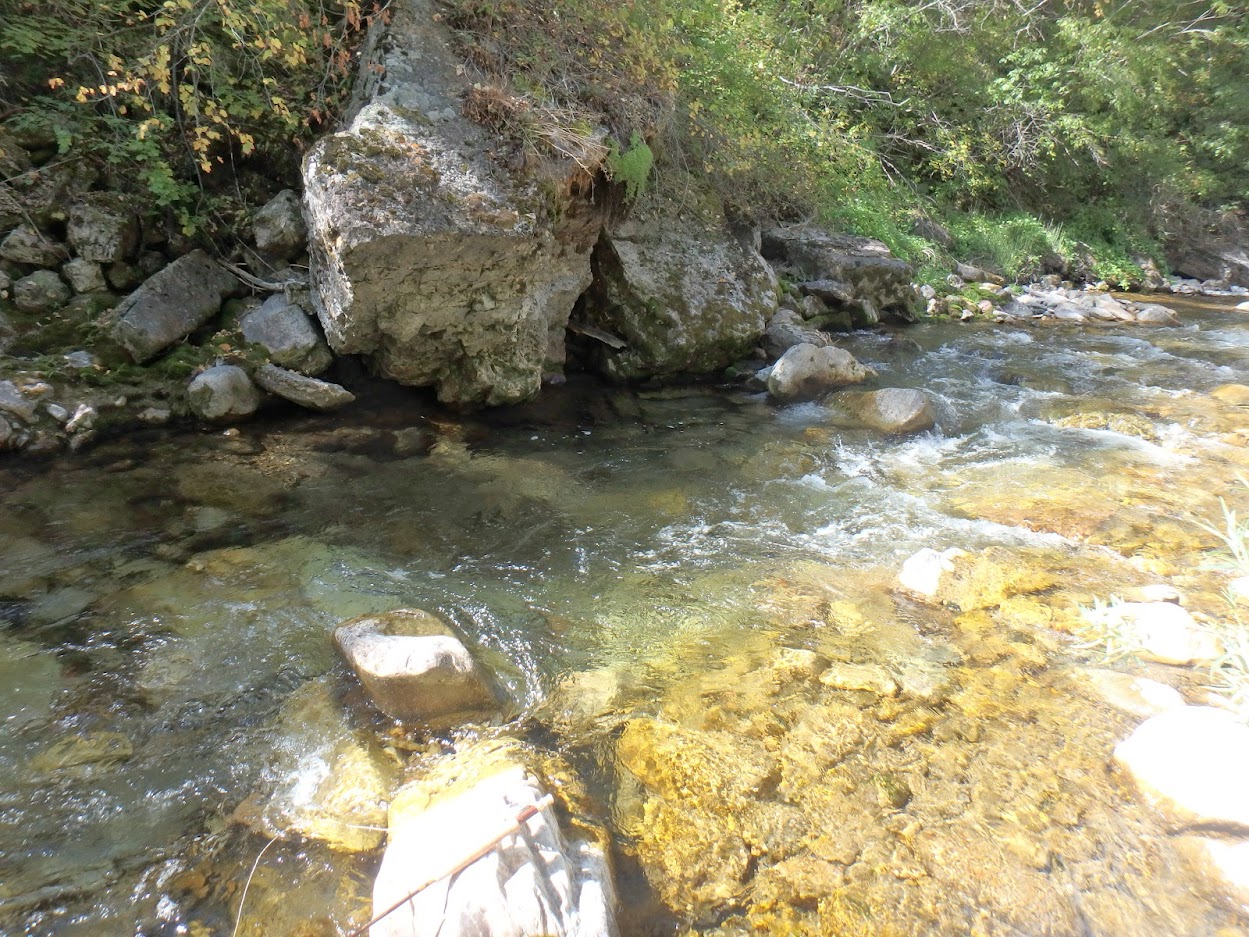 The early going evolved into thirty minutes of frustration, as I endured six temporary hook ups in some prime pools. Several of the fish nipped the hippie stomper, and I felt weight for only a split second, but the more discouraging scenarios were the connections with decent fish on the nymph that resulted in escapes. Several refusals to the hippie stomper only served further to foil my quest for small stream success. I decided to check the hook points on my flies, and I concluded that the iron sally was dull, so I swapped it for a newer version of the same fly that displayed a narrower, sharper point. 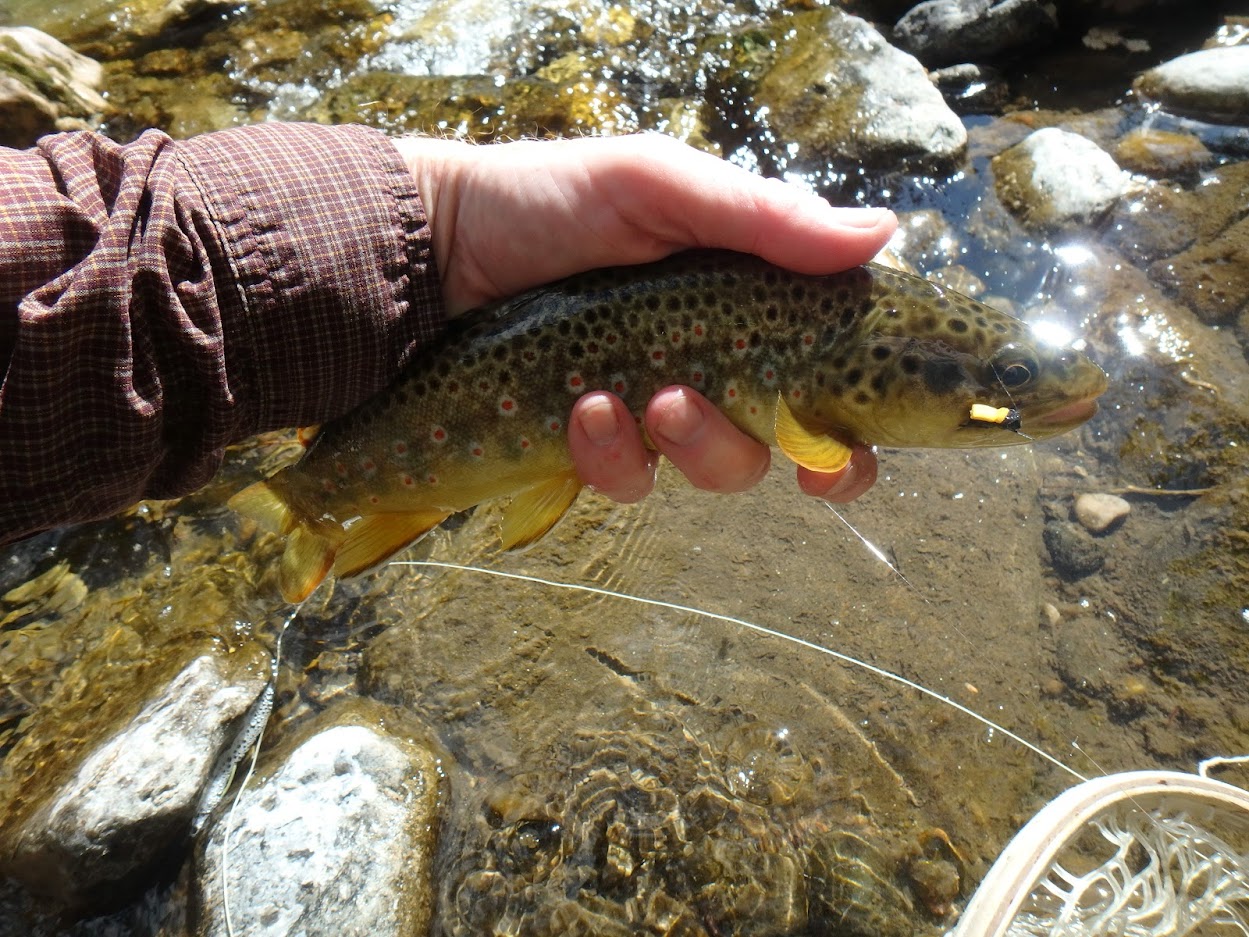 The move paid off somewhat, when I landed a small brown trout on the iron sally and then a somewhat larger cousin on the hippie stomper. I knew the string of long distance releases could not continue, and my fortunes finally turned, as I added four more trout to the count, and the hippie stomper was responsible for most of them. I focused on solid and swift hook sets, and this seemed to thwart the evasive tactics of the resident trout. 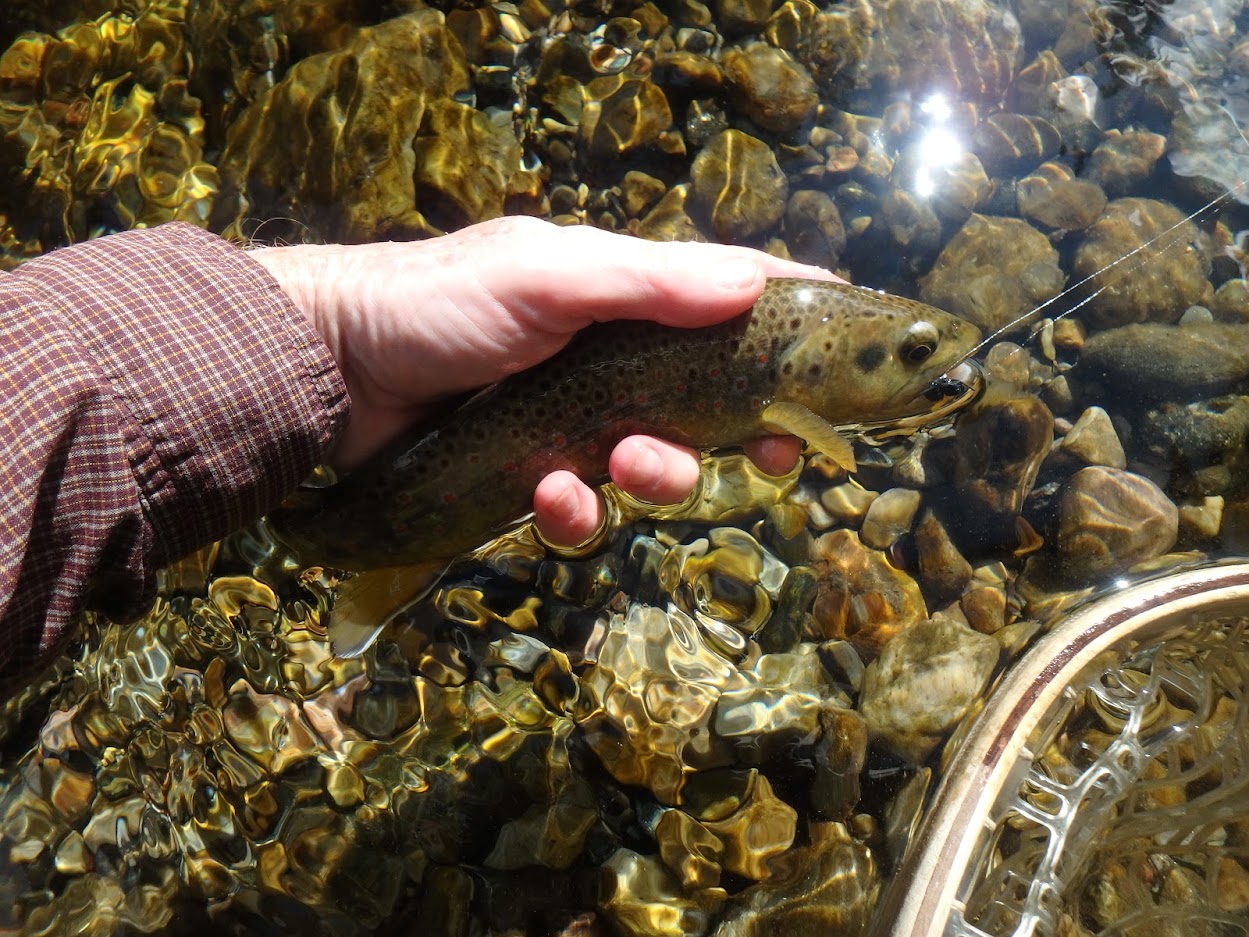 Just before lunch I approached a jewel of a pool, but an errant cast along the left bank snagged the iron sally in a cluster of flower stalks. I did not wish to disturb the pool by wading to unhook the nymph, so I executed a series of quick lifts in an attempt to free the fly. In a short amount of time the hippie stomper released and hurtled back toward me, but when I inspected the line, I discovered that the iron sally was no longer attached. Apparently it remained snagged to a stem or leaf, but I decided to defer the search, until after I fully explored the attractive pool in front of me. I was dissatisfied with the escalating number of refusals to the hippy stomper, so I exchanged it for a tan pool toy hopper, and I added a beadhead hares ear nymph and salvation nymph. 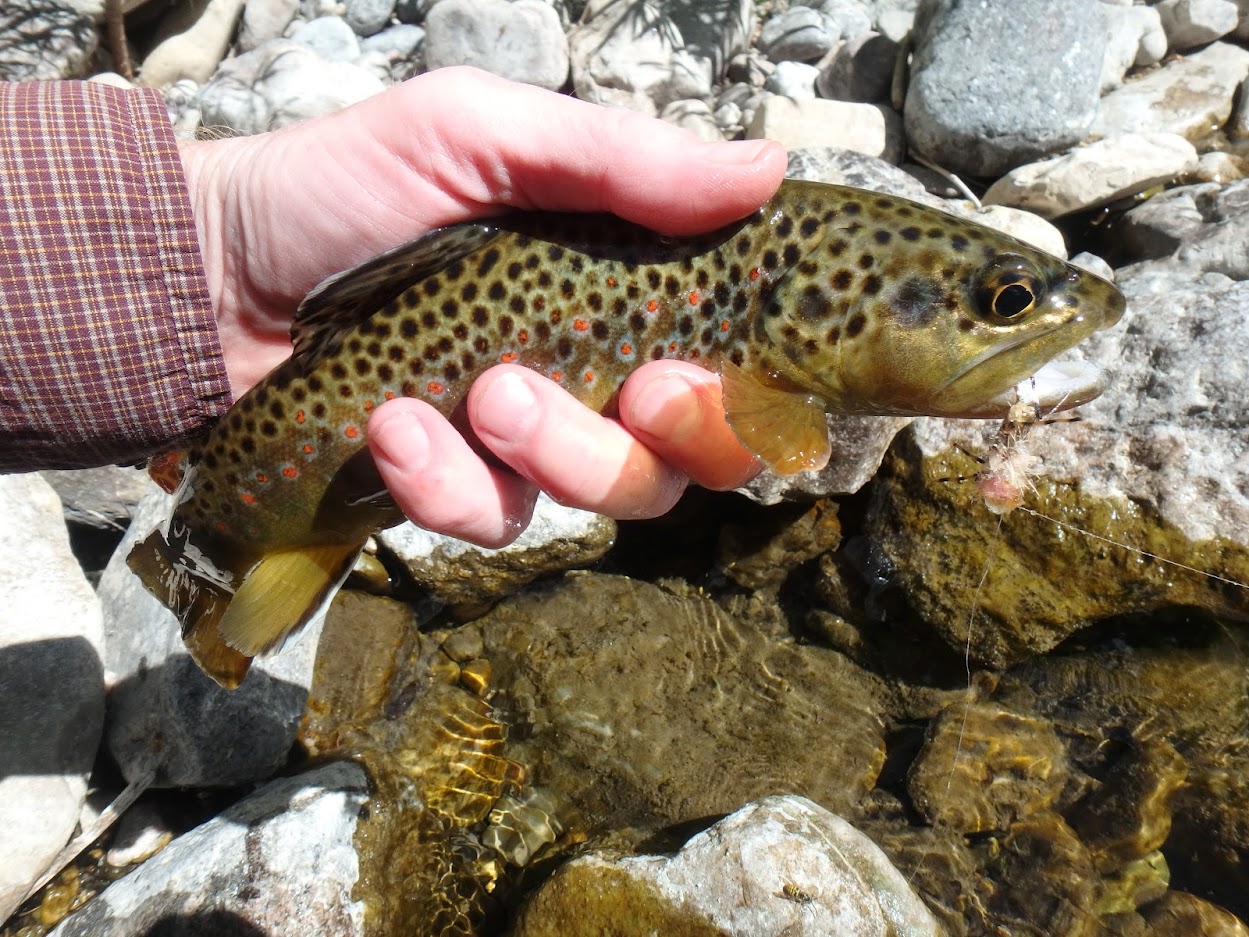 What a choice this proved to be! On the first cast of the pool toy it drifted along the current seam, and a gorgeous thirteen inch brown trout streaked upward and crushed the foam terrestrial. It was a visual display to behold. After I photographed and released the surprise brown, I paused on a rock to consume my lunch. Seven fish by lunch was a reasonable total, and this was accomplished in spite of an abundant quantity of refusals and long distance releases. 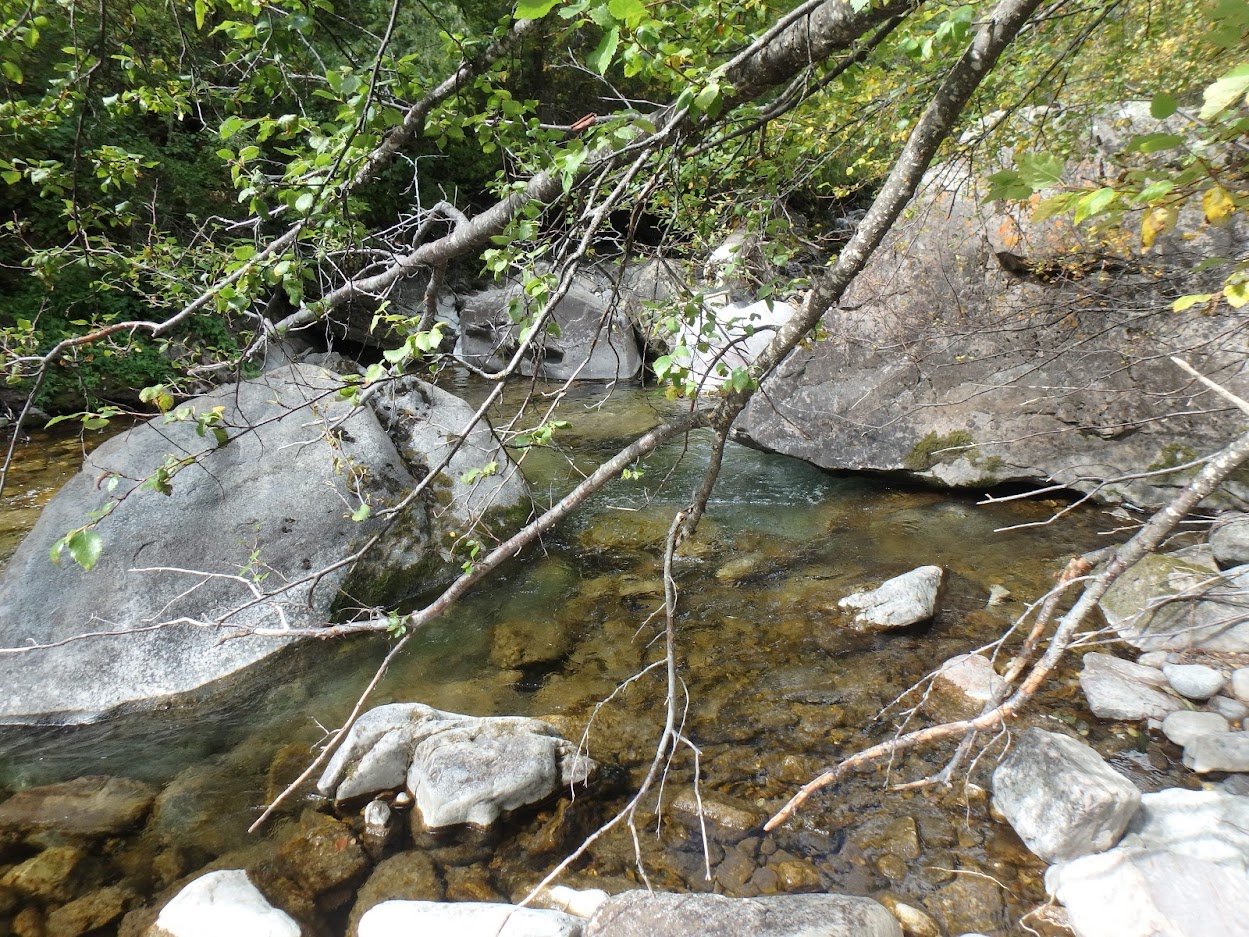 After lunch I continued with the hopper for a bit, and it produced a few additional trout, but then it seemed to fall out of favor. I wondered whether a beetle might be popular with the wild stream residents, so I tested it for a bit, and it added several trout to my net. Very slow moving pools seemed to be the favored locations for the beetle, but these places were scarce on the high gradient mountain stream, so I once again changed and tied a size 12 gray stimulator to my line. 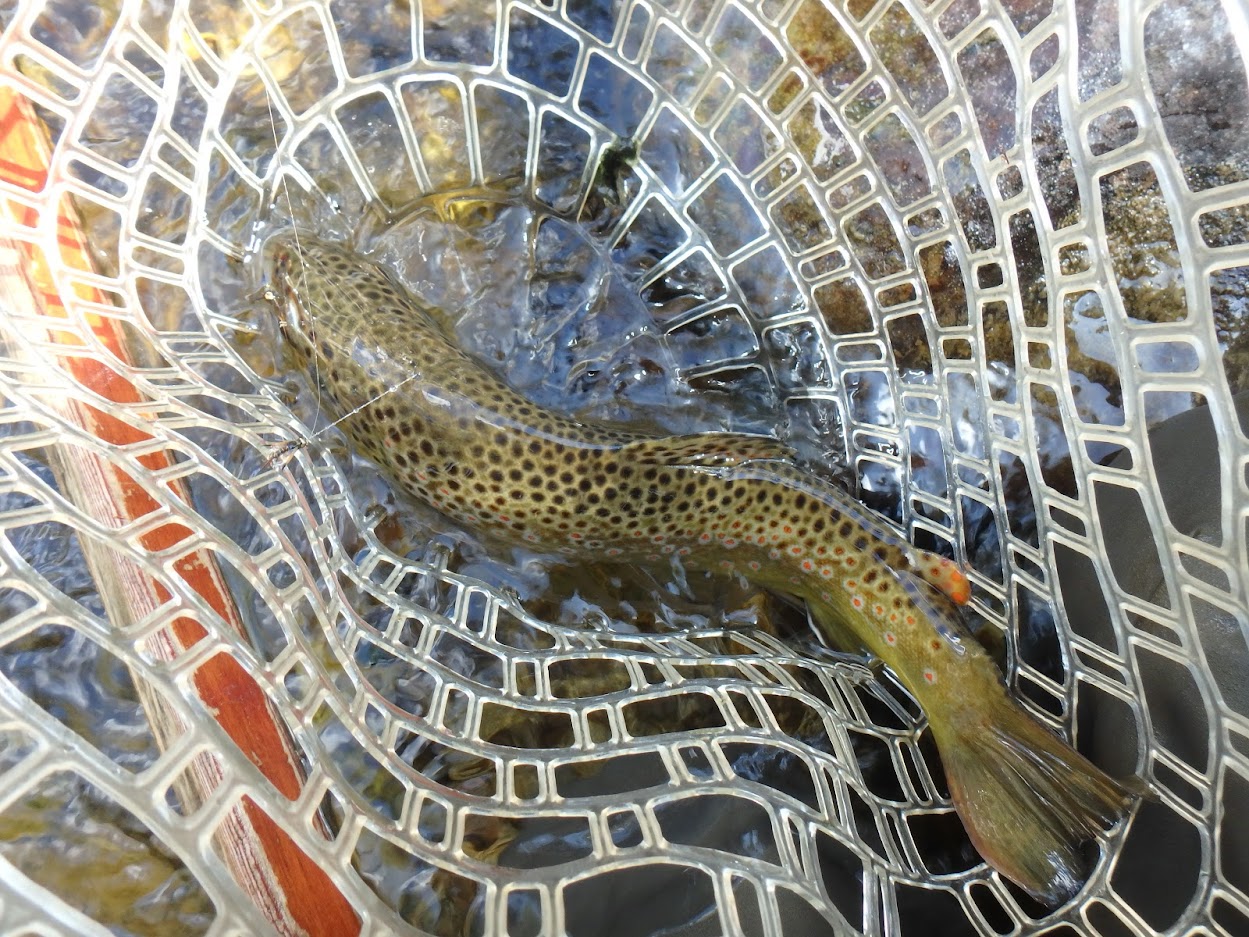 The stimulator was a bit more effective than the beetle, and it accounted for four medium sized fish, before I entered an area, where the stream narrowed, and some trees on the west bank shaded the creek for quite a distance. The stimulator absorbed water and became increasingly soggy, and I struggled to maintain a high profile that I could track. Suddenly I remembered some classic Letort hoppers and parachute hoppers that gathered dust in my fly box, so I gambled that the small and narrow profile might appeal to the small stream trout. My foam hoppers always seem bulkier and less realistic than the naturals observed in the local environment. 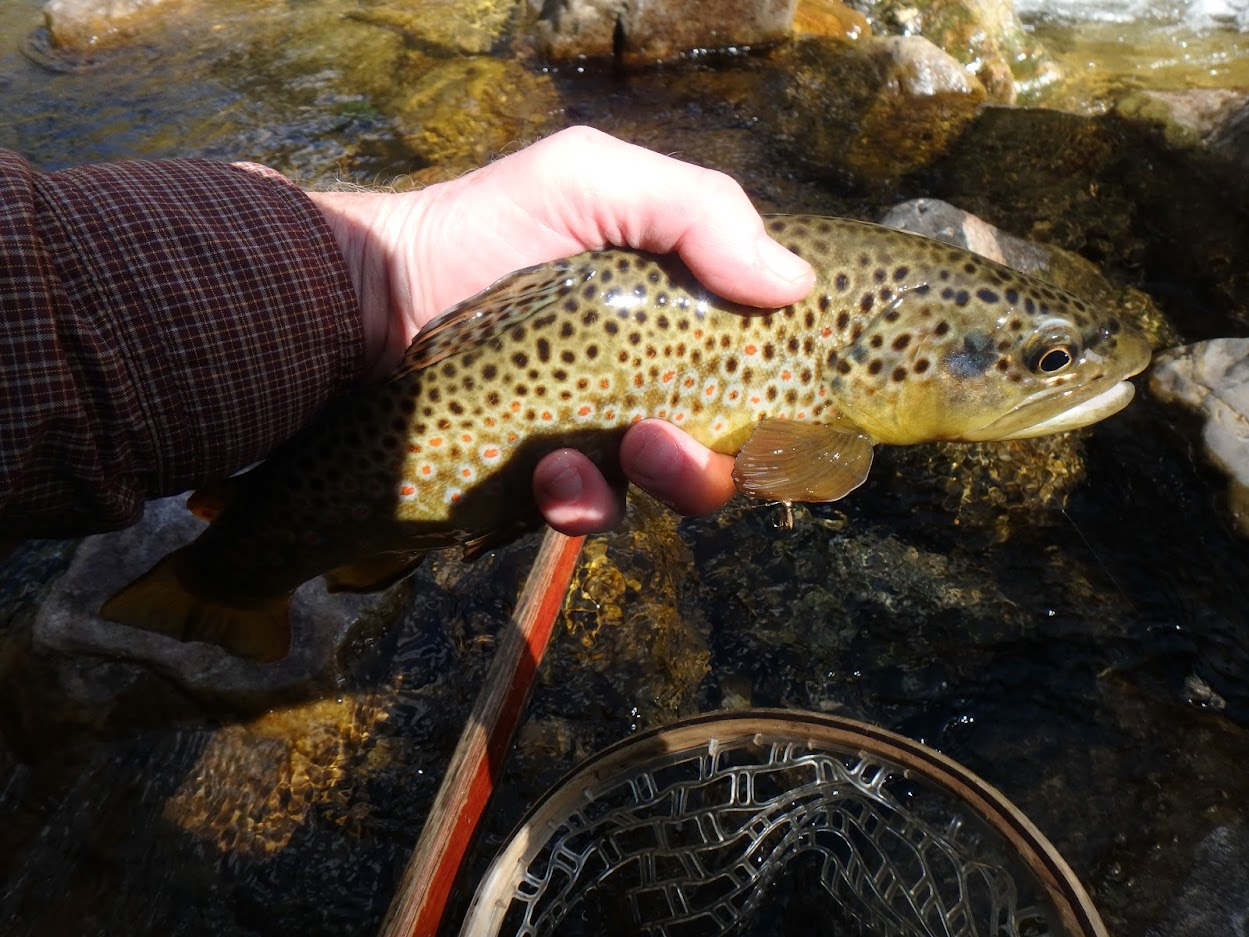 Beast of a Brown Trout

The change over to a yellow size 10 Letort hopper was a short term success, as I quickly landed two very respectable brown trout to elevate the fish count to nineteen. Refusals ceased, and the size of the willing takers improved. Unfortunately I remembered why the Letort hopper was relegated to a secondary role in my grasshopper imitation lineup. The body became saturated, and my ability to track it through the dense shadows and alternating light pattern was contingent on frequent trips to the dry shake canister and repeated fluffing of the deer hair wing to force it to angle high for visibility. 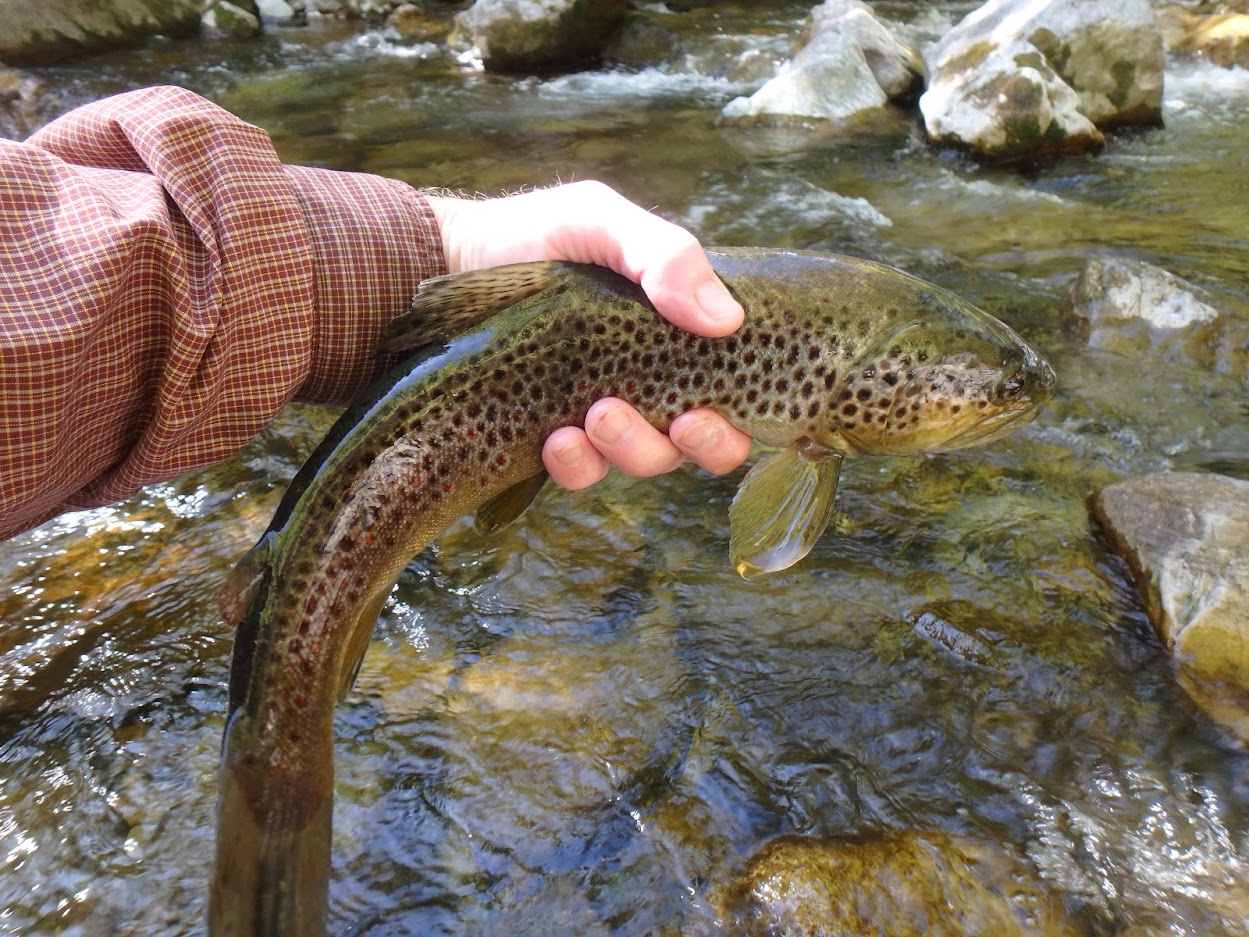 Beast of the Day

I was contemplating another change, when I approached a very large plunge pool with a relatively slow moving shelf on the right. I dried the hopper as best as I could and primped the hair to splay and poke upward and then plopped the classic terrestrial in the middle of the side pool. The sparse fly sat motionless for a second, as the ring from the landing disappeared, when suddenly a large shadowy figure emerged and moved upward at a steady pace, whereby it sipped the hopper from the pool. I was transfixed by the development but maintained my senses enough to raise the rod tip and set the hook, and this provoked a brief battle, before I slid my net beneath a small stream Goliath that easily measured sixteen inches. The brown trout was long and possessed an ample amount of body fat, and I was stunned by the sudden dose of good fortune. 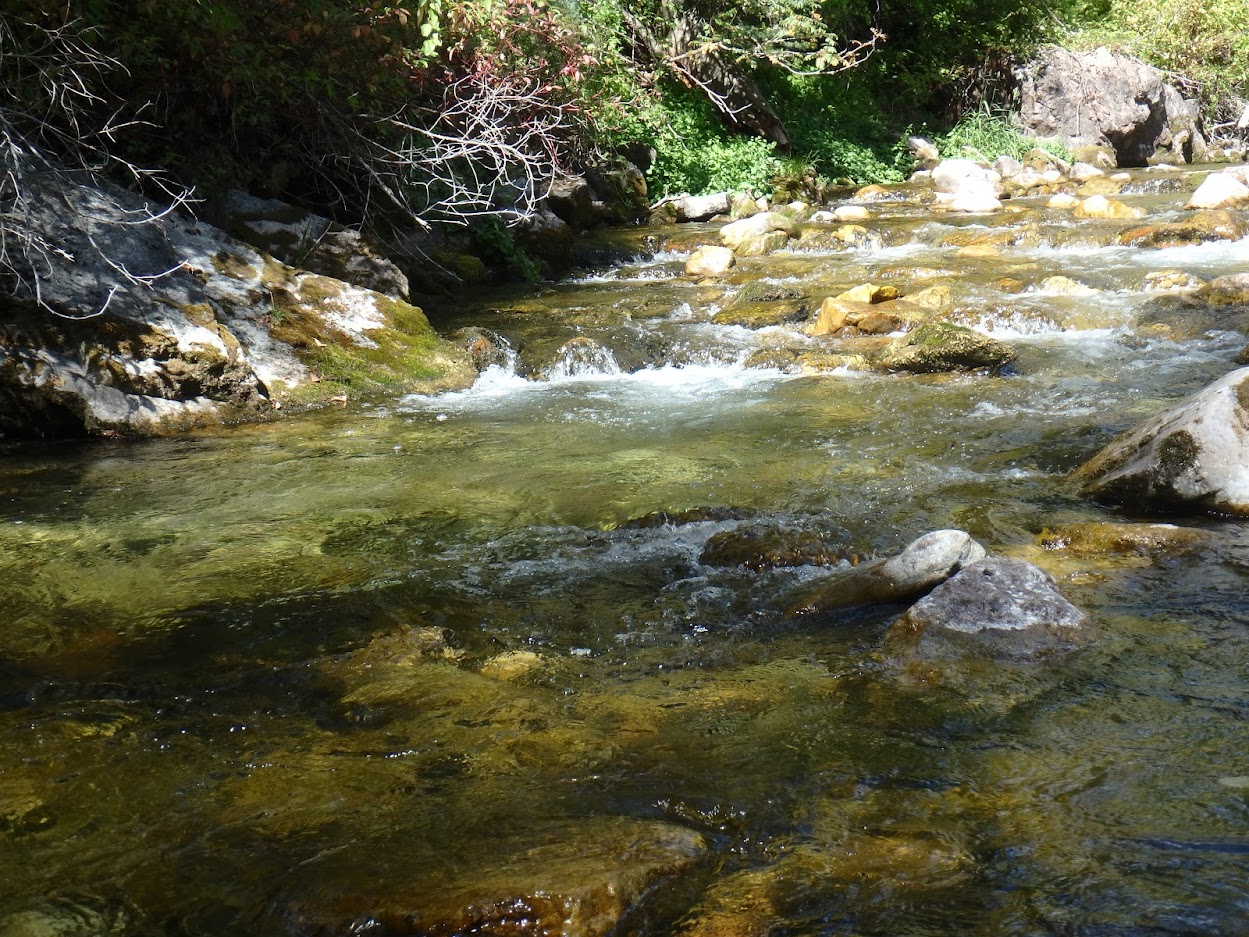 My optimism skied with the twentieth fish added to the count, and I proceeded upstream with the solo Letort hopper, but stream structure became steeper, and my frustration with the lack of buoyancy with the hopper escalated. I decided to return to foam, even if it meant fewer fish or more refusals. By now it was 2PM, and some clouds marred the perfectly blue sky, and this development in turn created some strong breezes. Surely the wind was dislodging ants and beetles, and the local trout were aware of these windfalls. I tried a Jake’s gulp beetle earlier with less than glowing results, but what about a classic black Chernobyl ant? It was larger, and the bright yellow indicator spot made it easier to follow, and it could support a pair of nymphs, if I chose to go in that direction. 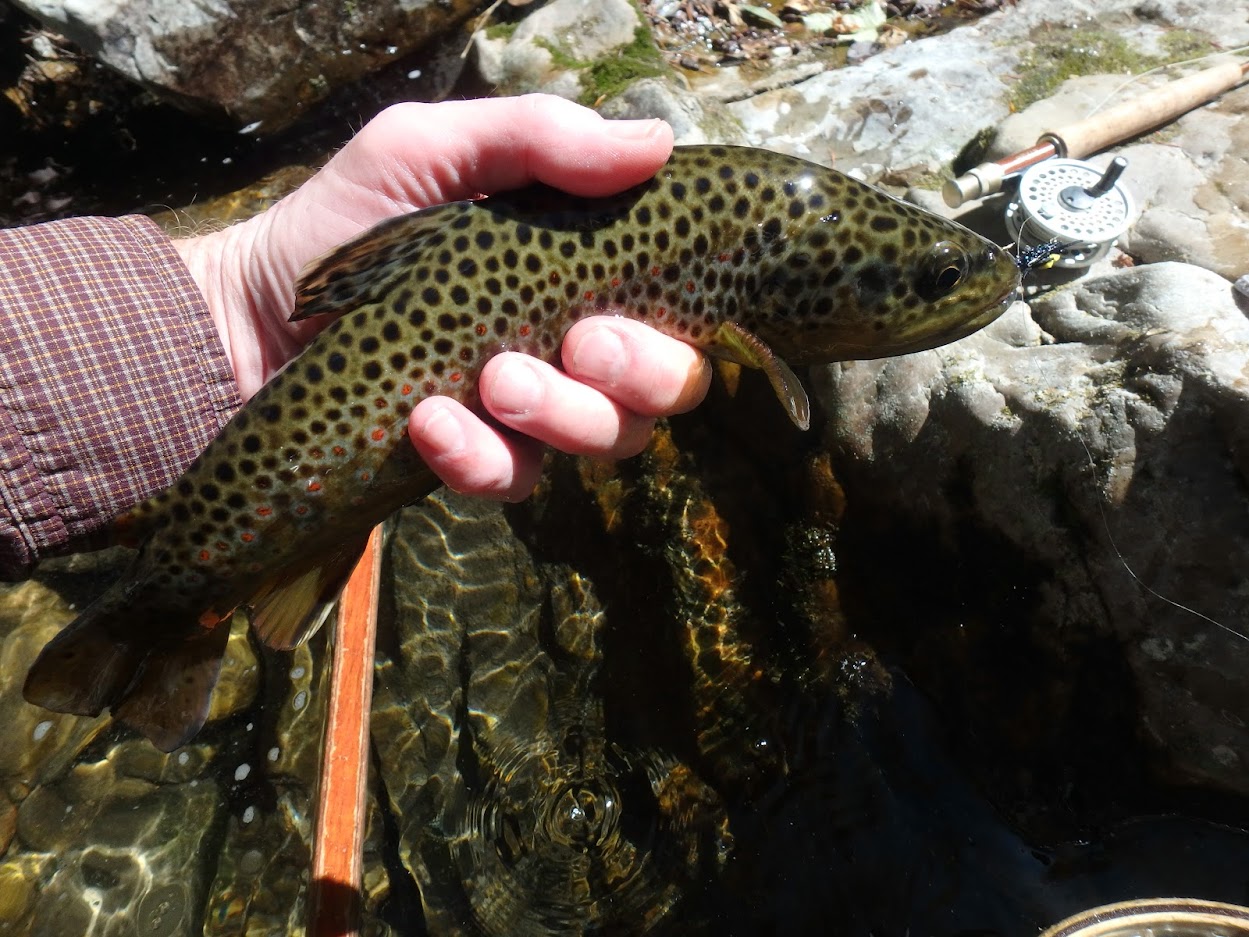 I made the change to a size 10 Chernobyl ant, and it proved to be the most effective fly of the day. In fact the first fish to respond to the over-sized ant was in a smaller slow moving side pool. I flicked the Chernobyl to the middle of the creek pond and allowed it to rest for a second, and a fifteen inch black spotted brown trout crunched the terrestrial impostor. What a thrill! I carefully played the hard fighting weight on my line and guided it into my net. At close range it rolled over the line at least five times in an attempt to shed the large foam beetle-like creature, that it recently desired as a meal.

The Chernobyl campaign continued for the remainder of the afternoon, until I retired at 3:30 and returned to the car. The radioactive ant enabled the fish count to rise from twenty to twenty-eight, and very few refusals accompanied its deployment. 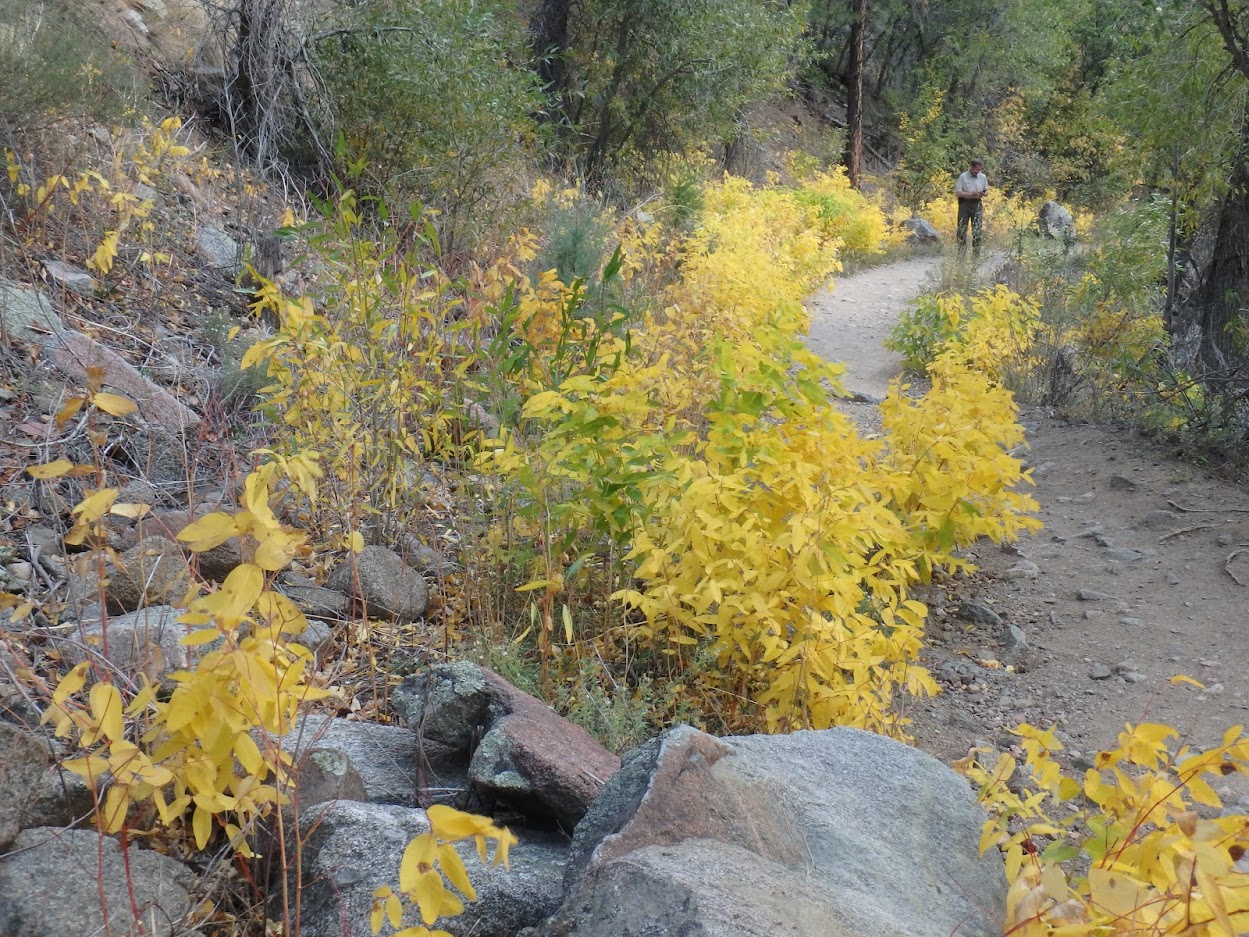 Friday was not a perfect day, as I lost five flies, and achieving a solid fish count required fairly regular fly changes. Frequent sopping, dry shake immersion, and fluffing were associated with the stimulator and Letort hopper; and I grew weary of these steps. In spite of these drawbacks I managed to land twenty-eight trout in five hours on a gorgeous backcountry stream. The weather was spectacular for late September with a high temperature around seventy degrees. Brown trout of fifteen inches are rare, but I managed to land two on a small backcountry creek. In addition I netted five healthy residents that stretched to twelve inches. Hopefully I can manage one more outing on this gem of a stream, before winter brings cold and ice to Colorado.