Tuesday was another gorgeous August day in Colorado with a high temperature around eighty degrees. A night of camping in the high country at a national forest campground enabled me to get an early start to my chosen mountain stream fishing destination. A DWR water gauge was nonexistent for the headwater stream, and I gambled that flows were down to reasonable levels for fly fishing.

When I arrived at the trailhead parking lot, I quickly surveyed the creek and noted that it was very clear and a bit high, but my assessment suggested nearly ideal conditions. In short I was very excited for a day of high country fly fishing. I climbed into my waders and rigged my Sage four weight and departed on a hike to escape the parking area. 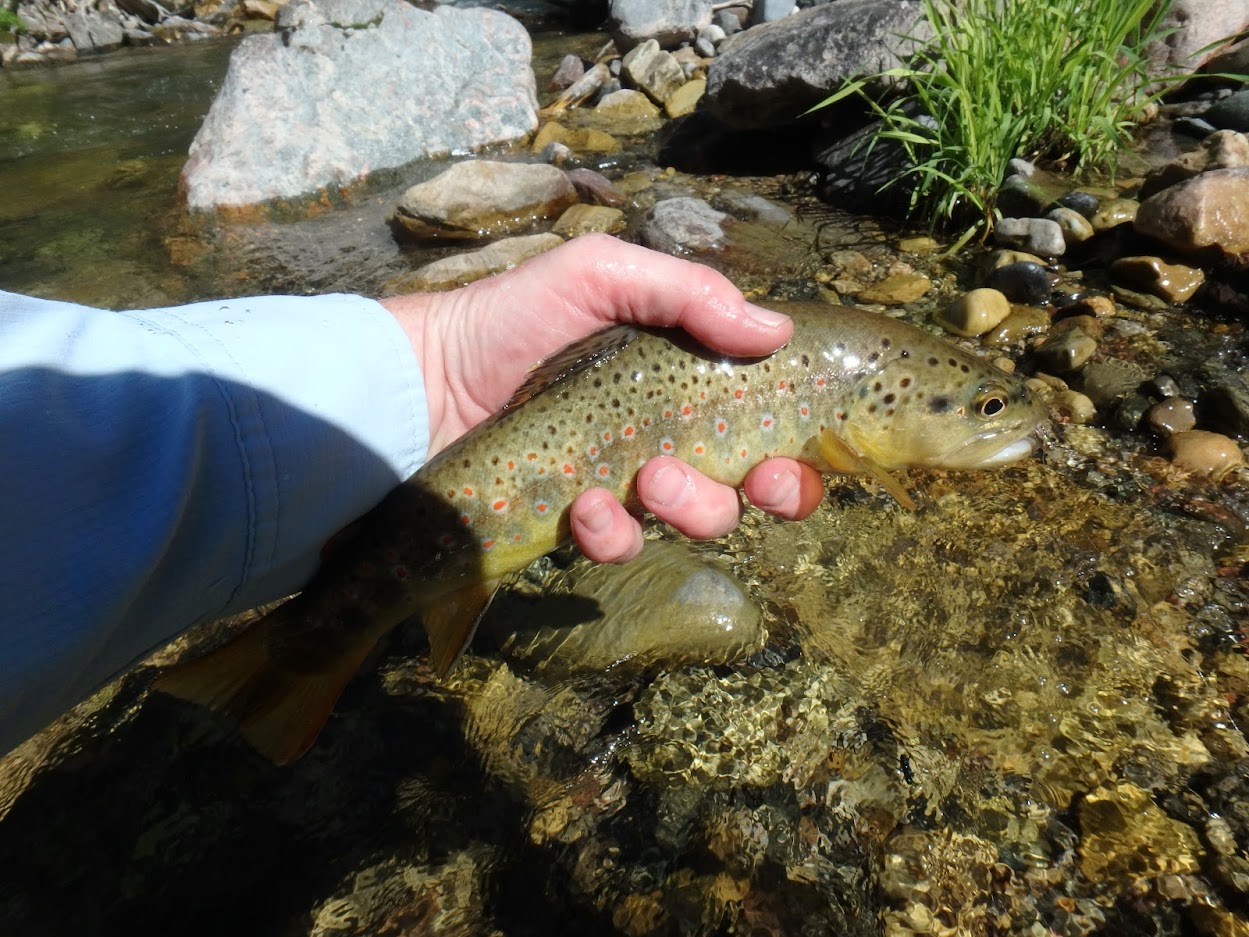 After a reasonable trek to distance myself from presumably the more pressured stream section near the parking area, I picked a path down a short steep bank and prepared to fly fish. I began with a size 10 Chernobyl ant and a beadhead hares ear, and almost instantly I was attached to three decent brown trout. Was I living a dream? This pattern of wading and prospecting with a dry/dropper continued throughout the day, and it was rare that I went more than ten minutes without a fish. 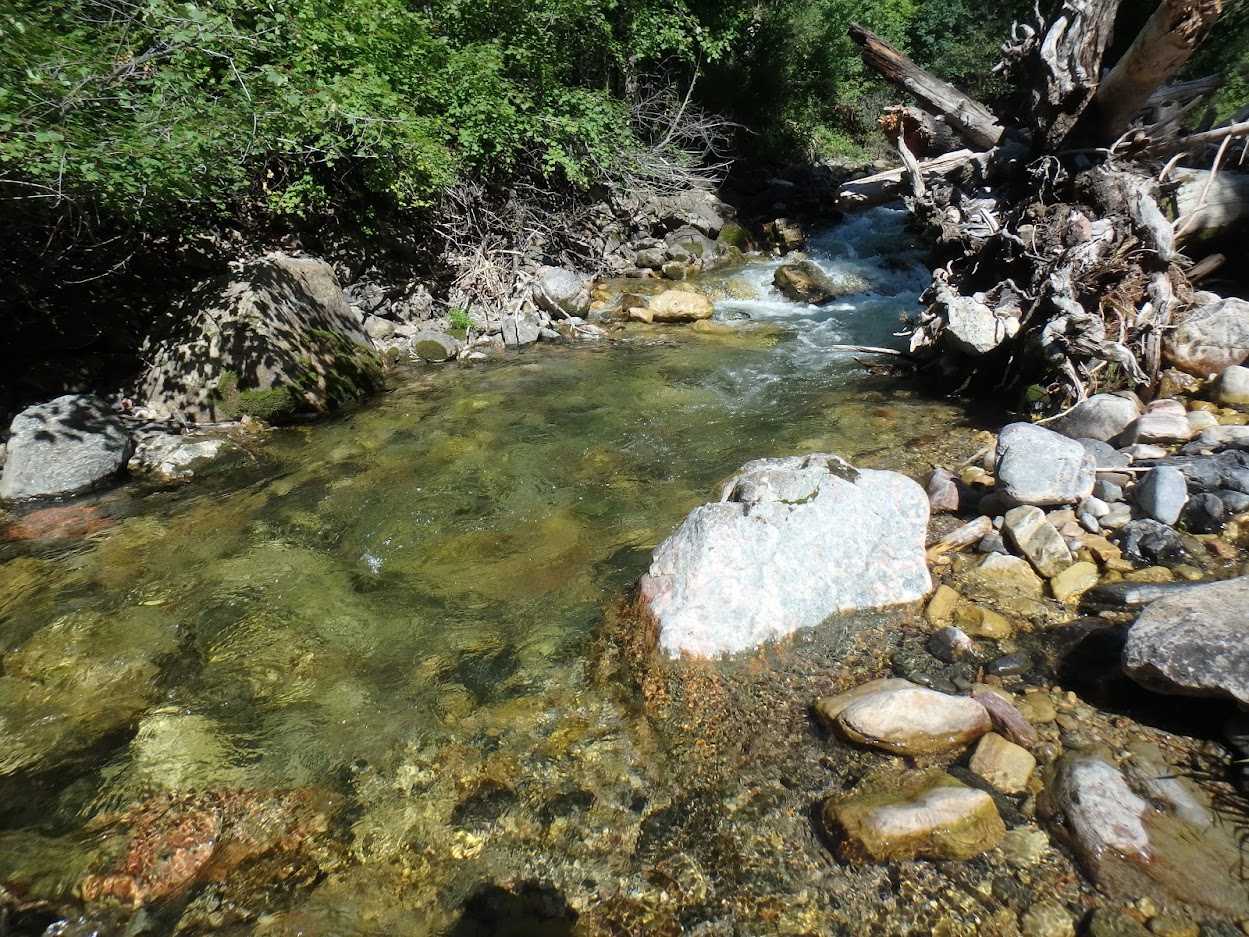 Eventually the Chernobyl ant segued to a peacock body hippie stomper, and the stream residents quickly registered their satisfaction with the size 14 attractor pattern. The hares ear dominated the subsurface position on my line, but I also allocated time to an ultra zug bug and bright green sparkle caddis pupa. None of the alternatives performed up to the level of the hares ear. During the heat of battle I lost two peacock stompers and one silver to presumably bad knots, but sixty percent of the landed fish smashed the trendy surface attractor designed by Andrew Grillos. 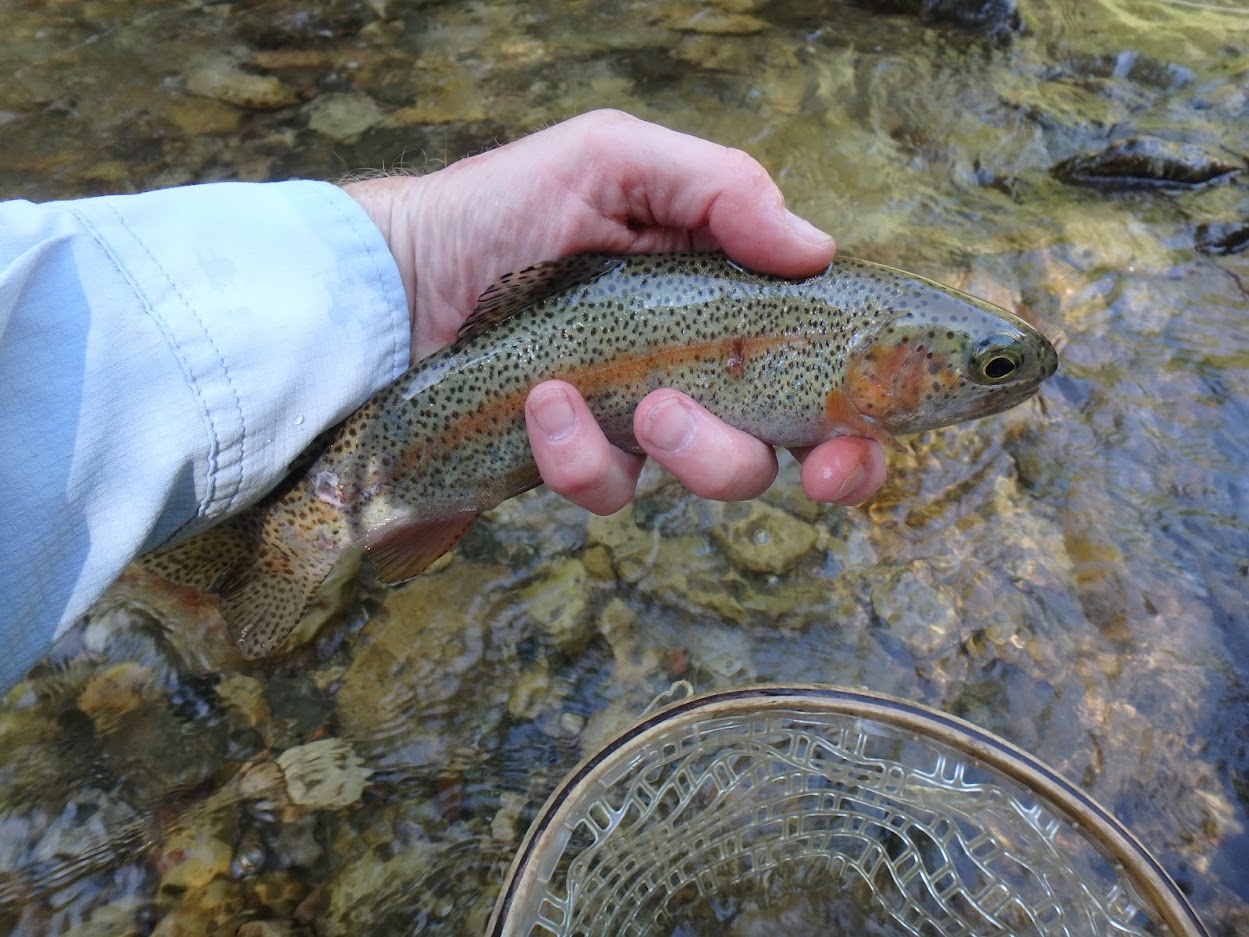 The day progressed as expected and registered high on my satisfaction meter. I methodically waded upstream and dropped casts in all the likely fish holding locales. While the peacock hippie stomper and hares ear nymph were in place, nearly every probable fish lair delivered positive results. I stopped for lunch, and the fish count rested on fourteen. 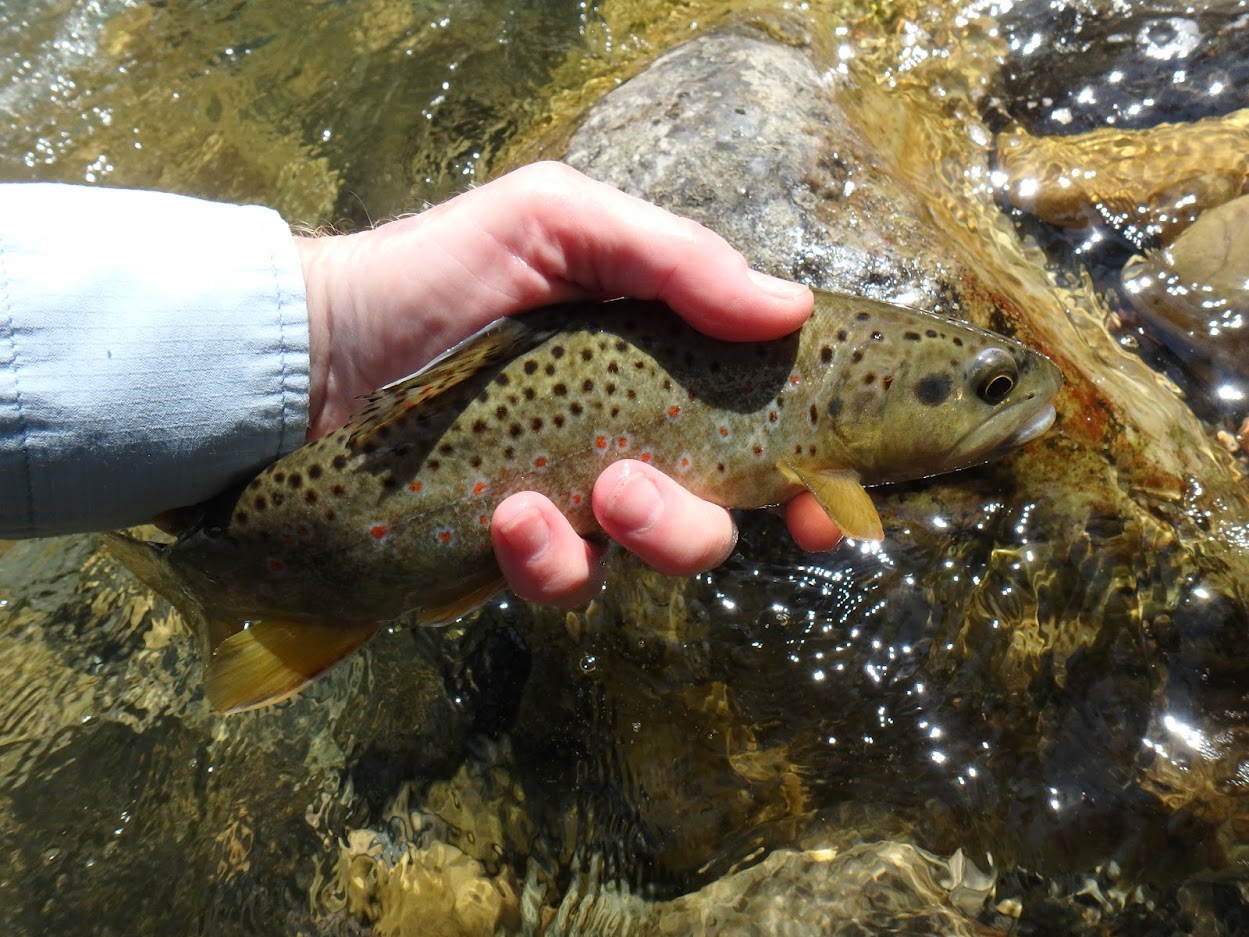 From 12:15 until 1:30 the creek was on fire. Nearly every cast resulted in a temporary or permanent hook up. I was frankly astonished by the trout density in the small mountain creek and more importantly their willingness to attack my flies. Brown trout predominated, but a decent number of rainbows surprised me with their presence. The ratio of browns to bows was probably 65/35. 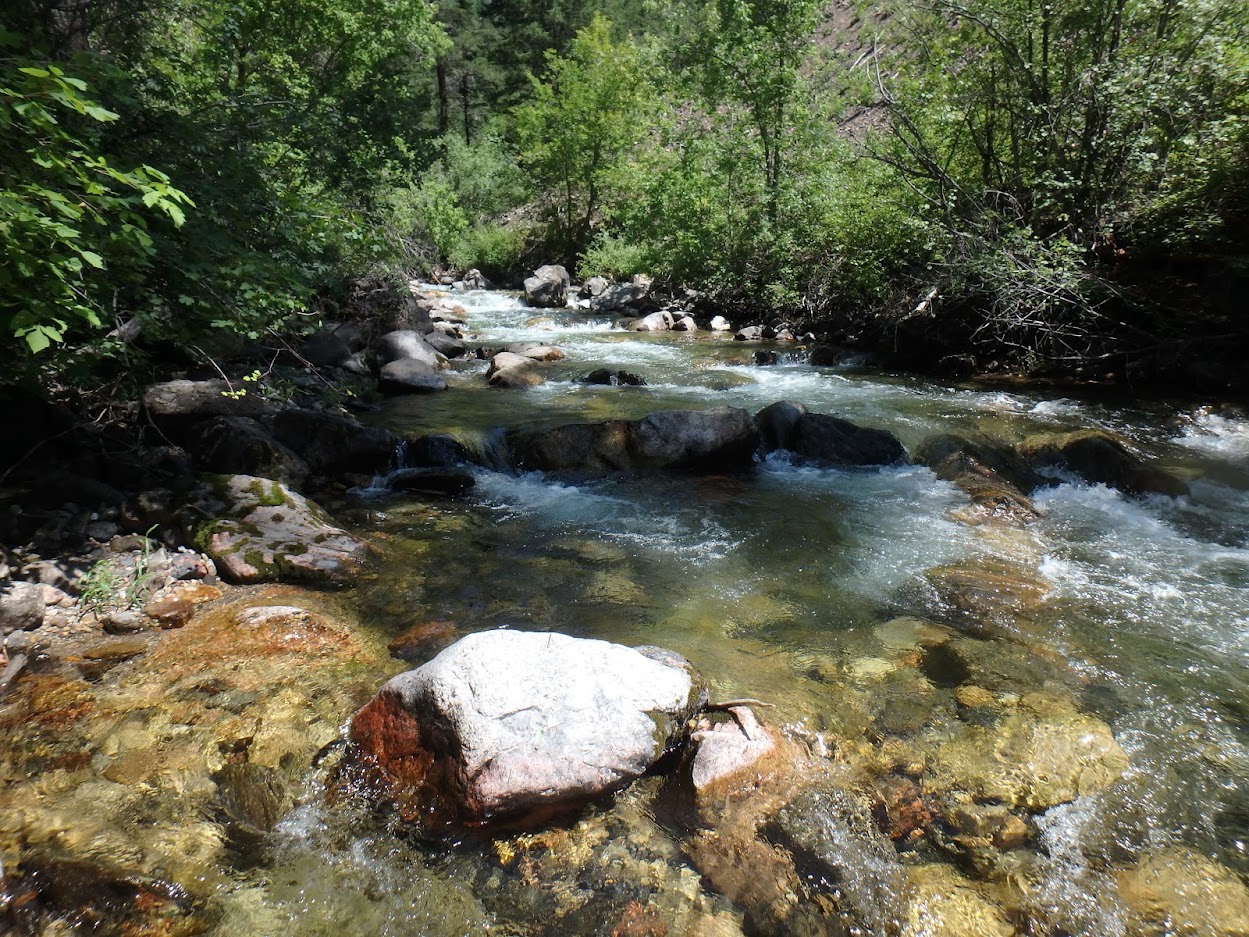 At 2PM I lost a third hippie stomper, and in an effort to preserve my supply for the remainder of the season, I cycled through a Jake’s gulp beetle and Chernobyl ant. Jake’s gulp beetle was treated with total disdain, and the Chernobyl accounted for a couple of additional trout. The catch rate lagged what I was accustomed to, so I revisited the hippie stomper with a red body color. It also contributed a few trout, but either the prime feeding period ended, or the red version was not as desirable, because I could not recreate the magic of the early afternoon. 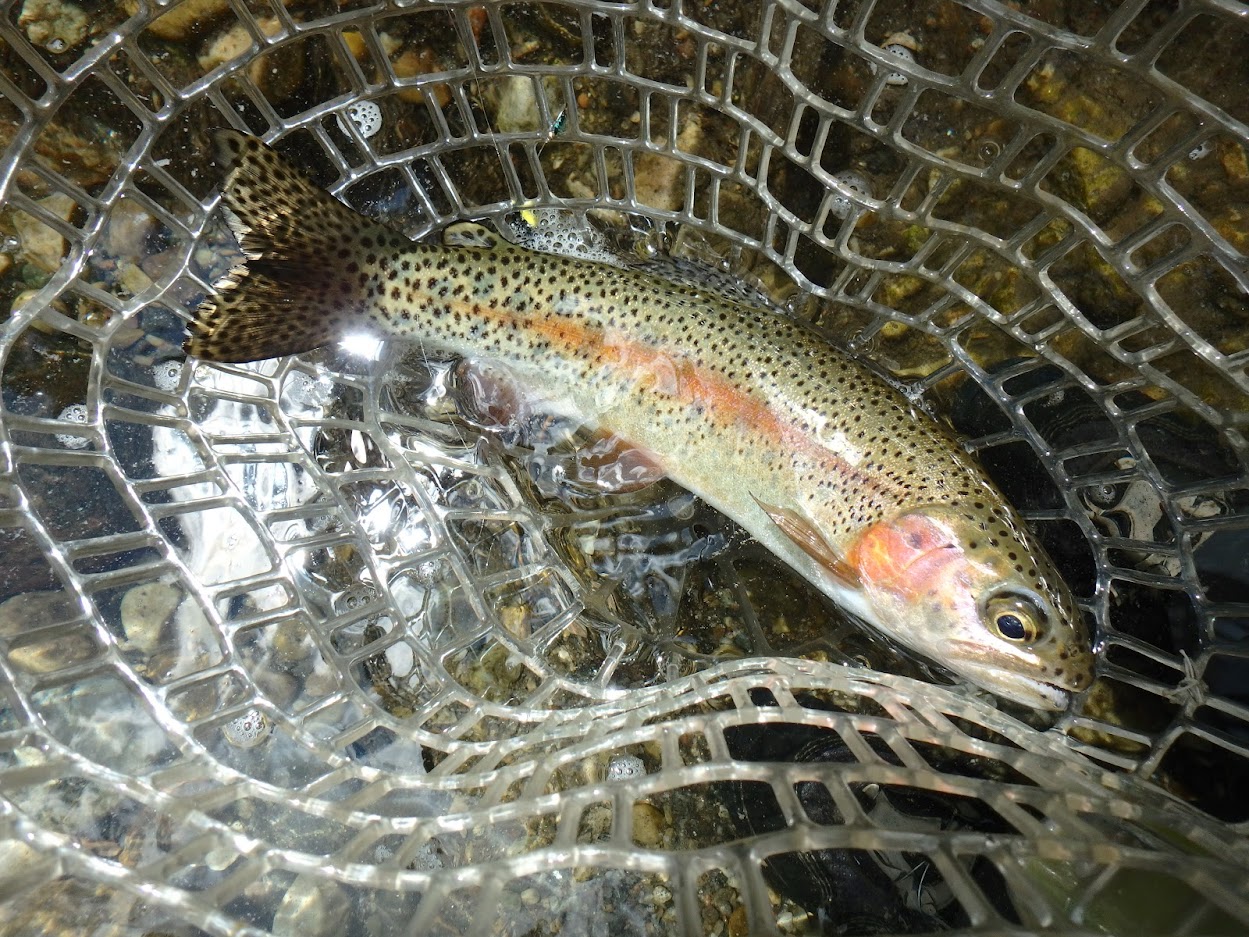 Of course the day was not perfect. I lost seven flies and suffered an inordinate number of long distance releases. Several wrestling matches with trees were also part of the program, but that is an expected byproduct of small stream fly fishing. 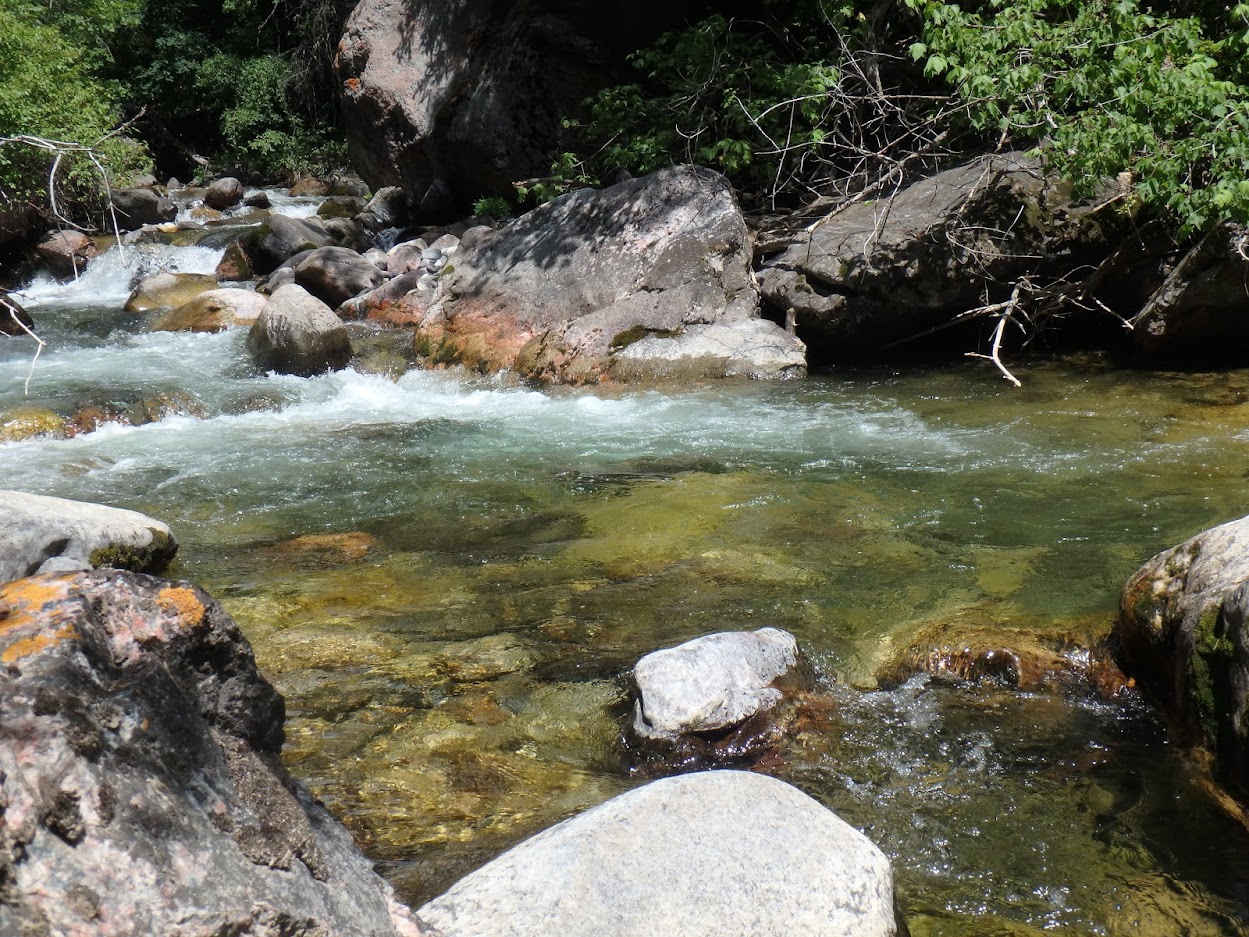 Overall, however, the adversity remained at a lower level than that which I suffered on Monday and was more than offset by the fast paced action. The size of the fish was also a plus with many brown and rainbow trout in the eleven to thirteen inch range. I will accept wild trout of that size in a small high elevation stream all day long. A return this season is a certainty.