I could not resist the temptation to fish again on Monday October 16, since the weather prognosticators projected high temperatures in the seventies. Perfect autumn days do not appear often in October, so Jane and I resolved to take advantage. We ate lunch at home and then packed our gear in the car and departed for Clear Creek Canyon. A forty-five minute drive delivered us to the parking lot just west of Tunnel No. 5, and this became my destination for Monday. I gathered my gear and assembled my Orvis Access four weight, while Jane added some layers and prepared to hike the Peak to Plains Trail. The temperature at our home in Stapleton was 75 degrees when we departed, and the dashboard display registered 64 at the parking lot. A huge cloud hovered above us, and I swapped my short sleeve T-shirt for my Columbia long sleeve undershirt in response to the drop in temperature and lack of sunshine. I also added a fleece layer for added comfort.

Clear Creek was flowing at 60 CFS with exceptional clarity, and my optimism rose, as Jane and I hiked along the trail downstream from the parking lot. We followed the oxbow that circles around the tunnel, until we were opposite US 6 below a very steep rocky embankment. At this point I said goodbye to Jane and scrambled down a rocky path of moderate difficulty to the creek. I was downstream from a narrow white water chute, and the stream was characterized by deep pockets and runs. During October in previous years the trout of Clear Creek responded favorably to a Jake’s gulp beetle, so that is what occupied my line, as I made my first cast. 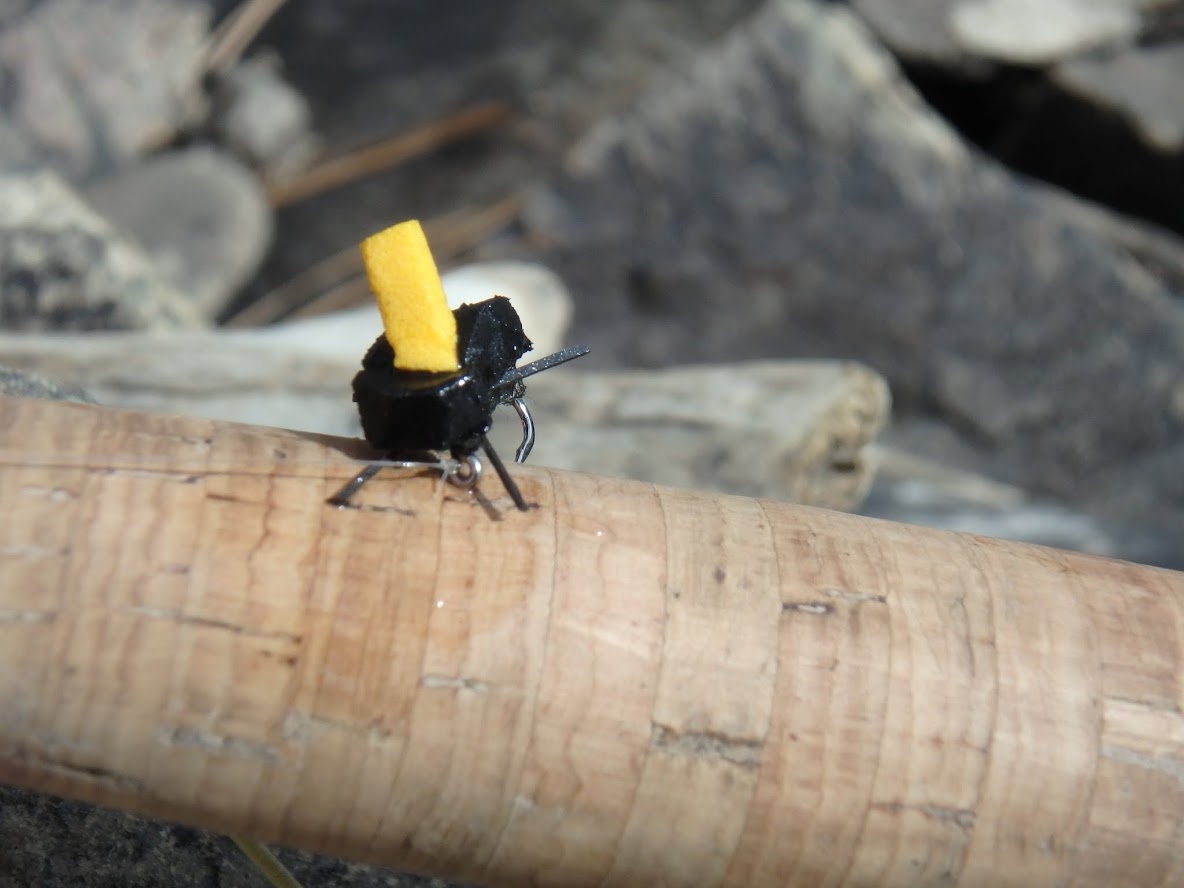 After ten minutes of unproductive fishing, I reached a place where some nice slow shelf pools presented themselves along the opposite shoreline. Once again history suggested that Clear Creek trout would respond to downstream drifts, so I lobbed some casts across the stream and commenced some rapid fire mending to allow the beetle to float without drag along the rocky bank. The technique worked, and an eleven inch rainbow trout nipped the low floating beetle just before it began to drag at the end of the slow water. I was quite pleased to land my first fish in uncharted water on Clear Creek. 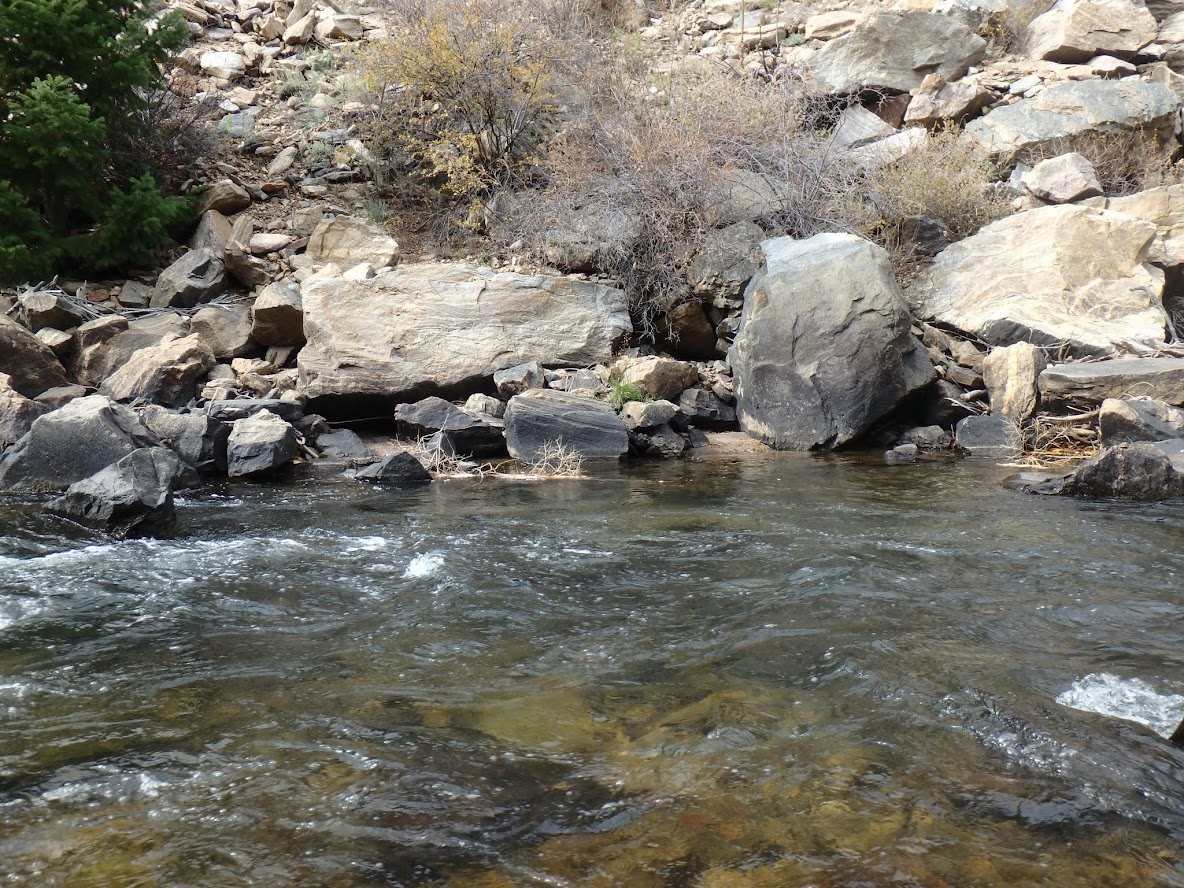 The Home of the Rainbow

Another shorter shelf pool existed above the home of fish number one, so I employed the same across and down approach, and miraculously a second rainbow grabbed the foam beetle at the lip. This spunky fish put up a nice battle and measured out at twelve inches. The afternoon was off to a superb start, and my outlook on the remainder of the day brightened.

I continued upstream, and while I made upstream casts on my side of the stream, I also searched for slack water along the far bank, since the across and down tactic yielded two early rainbows. After twenty minutes with no action, I encountered a nice midstream pocket and eddy behind a large exposed rock. The depth was moderate, and I popped the beetle in the middle of the small pool. The terrestrial crept a foot upstream toward the epicenter of the eddy, and suddenly a ten inch brown trout appeared and chomped the beetle. Prior to this success I was concerned about the absence of brown trout, and now I was reassured that they continued to inhabit Clear Creek. 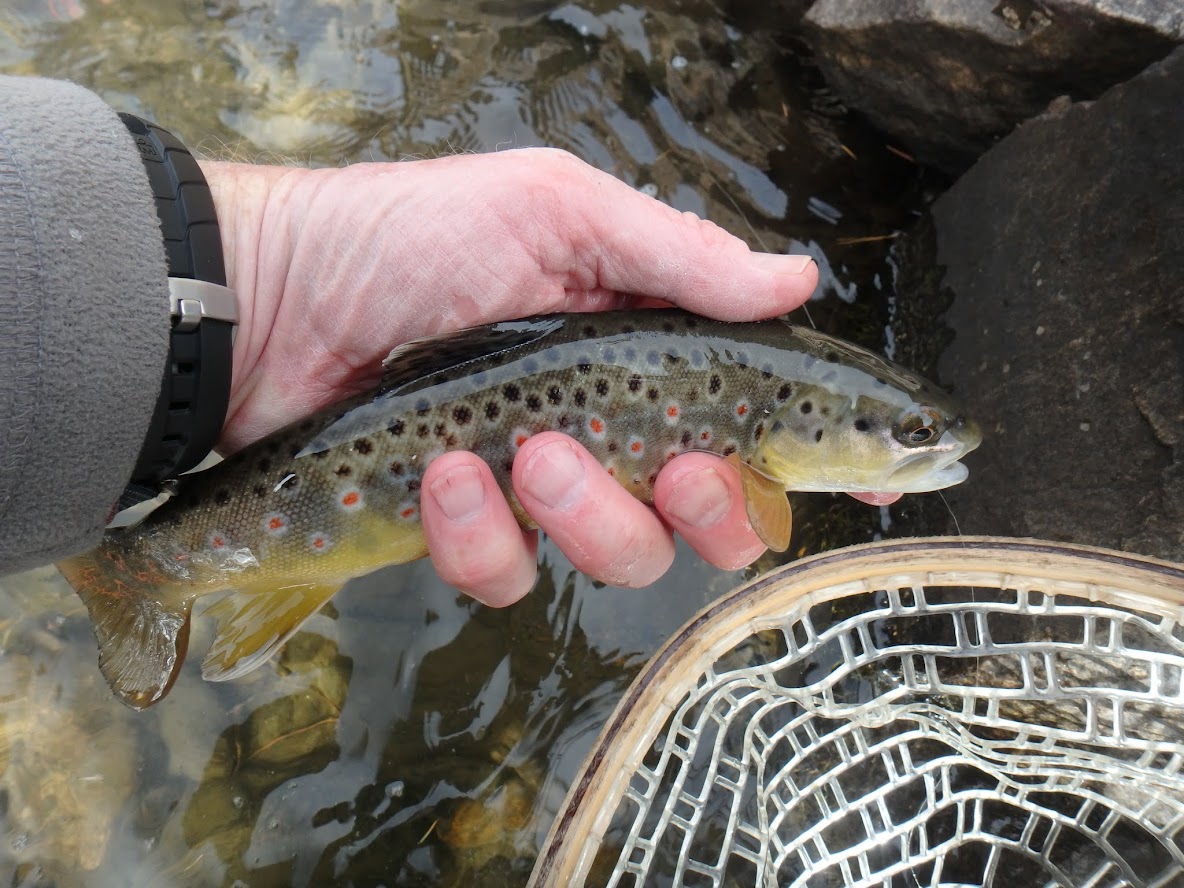 After releasing the brown I decided to plop the beetle in the pool a few more times in case relatives were present. On one of these casts the beetle floated tight to the exposed rock, and just as it curled along the faster current seam, a dark form elevated for a closer look. I suspected that it was a rainbow trout, but I was unable to entice a strike, so I paused and exchanged the beetle for a parachute ant. On the second cast of the ant a small six inch brown trout darted to the surface and snatched the black morsel. I was not able to tempt the larger fish that inspected the beetle, so I surrendered to its selectivity and moved on.

The remainder of my time on Clear Creek mimicked my description of the first hour. I landed three additional trout including two more brown trout and a third rainbow. The last bow slurped the beetle in a shelf pool along the left bank, and it measured a length that was similar to the first two. In addition to the seven fish landed, I coaxed two or three additional brief hook ups by applying the across and down ploy. I cannot explain why this presentation is effective other than the fact that the fish see the fly before the leader. 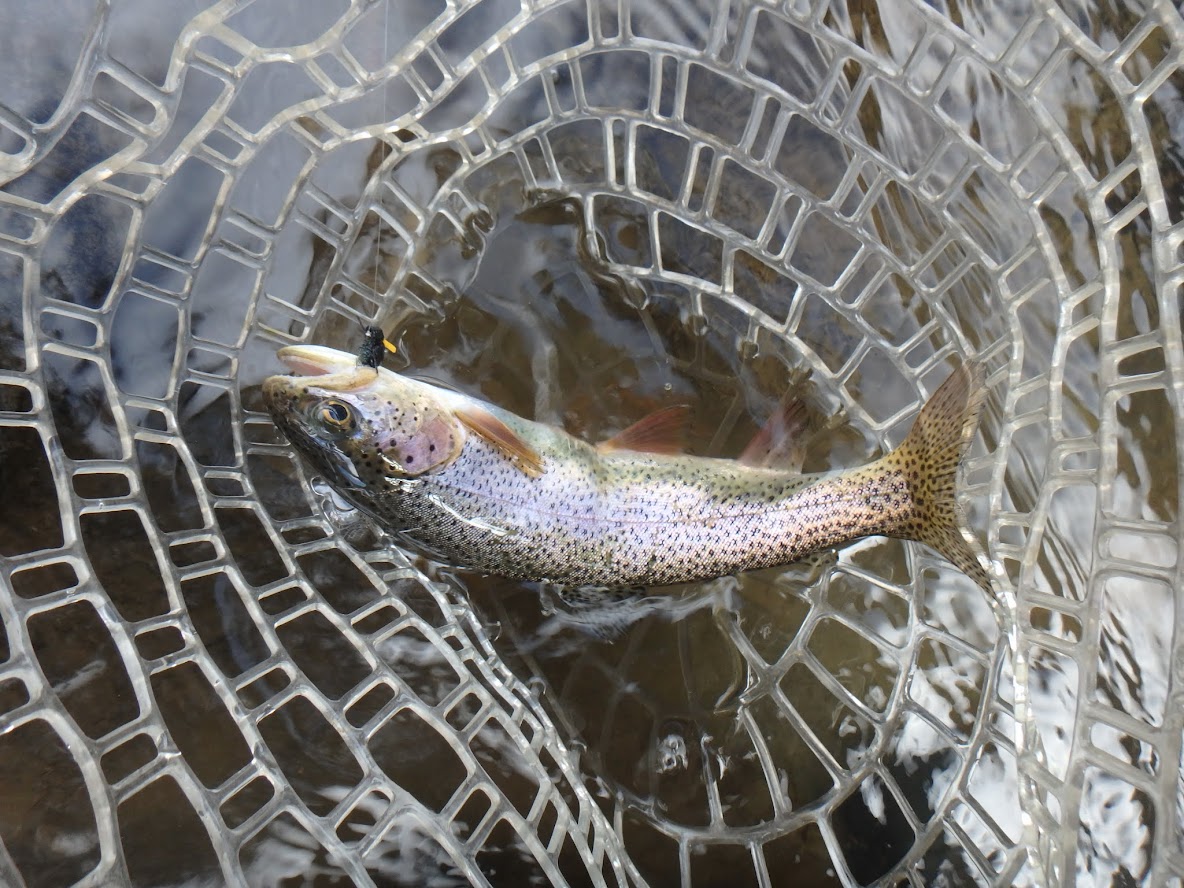 Monday evolved into a nice bonus day of fishing on Clear Creek, as I discovered a new section and reversed the bad karma of 9/18 and 8/29. The weather was unseasonably warm for October 16, and I landed seven decent trout by Clear Creek standards in two hours of fishing. All the netted fish succumbed to surface flies with Jake’s gulp beetle attracting the most interest. Quite a bit of interesting water remained between my exit point and the parking lot, and I plan to revisit in the near future if the weather cooperates.