Location: Bottom of hill just before RV campground and then just above Grandpa’s Retreat

After a slow hot day on the Colorado River on Wednesday I had another day available to fish since the office manager didn’t have June ready for my attention so I decided to make a trip to the Big Thompson River below Lake Estes. Flows have been at 125 cfs for several months now and fish tend to love consistency. The other option was the North Fork of the St. Vrain, and that was tempting, but I’d been there twice recently and I was looking for something different. I checked out the various fly shop reports on the Big Thompson before I departed at 7:30AM and all suggested that the fishing was reasonably good.

I arrived along the stream at around 9AM and parked on the right shoulder just above the RV park at a large bend. Quite a few of the pullouts upstream were already occupied and I continue to be amazed by the pressure this relatively small stream receives. I suspect Rocky Mountain National Park attracts a lot of tourists and they decide to hire a guide for the day and the Big Thompson in the canyon is the best local fishery.

It was already quite warm for 9:30AM as I waded into the Big Thompson just above the last RV. As is my custom I began with a Chernobyl ant and a beadhead hares ear and it didn’t take long before I landed an eleven inch brown as I lifted to recast, but then I began noticing refusals to the Chernobyl ant so I clipped off the two fly combo and began experimenting with different dries that the fish might be willing to eat. I tried a light gray caddis and a small stimulator with a green body but this didn’t even prompt refusals. Eventually I went back to the dry/dropper with a yellow Letort hopper and a salvation nymph, and the nymph produced a nine inch rainbow. After an hour of fishing I’d landed two fish, but I was covering a lot of territory in order to land a few fish and the air was getting warmer.

I worked my way up along the roadside bank prospecting all the decent pockets and slots and landed another small six inch rainbow on the salvation nymph, but I experienced a long dry spell so I decided to replace the salvation nymph with a bright green caddis pupa under the theory that the reports mentioned caddis and a pupa with some movement might create some interest. Sure enough as I was climbing over some rocks to move upstream I allowed my flies to dangle behind me and a rainbow nailed the caddis. I played it for a bit and could see it was a rainbow when it leaped from the water, but then it turned in some faster water and the fly came free.

It was now 11:15 so I decided to return to the car and eat my lunch and exchange my Loomis five weight for my Sage four weight as this is a stiffer rod and better for deep nymphing. After lunch I returned to a nice deep slot and began working the nymphs deep with a lot of movement. You don’t know until you try, and in this case I tried  with no results.  I grew bored with nymphing and hadn’t the fish at least been looking toward the surface and refusing the Chernobyl ant? I removed all the nymphing gear and returned to a gray parachute hopper with the beadhead hares ear below and returned to popping the dry/dropper into the likely pockets. 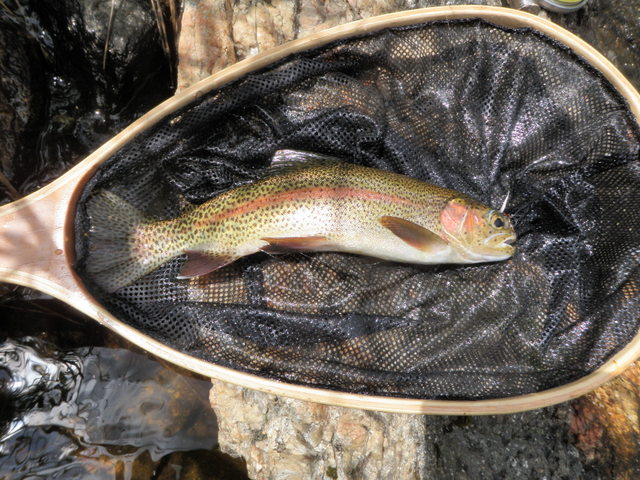 Sure enough in one nice pocket a rainbow tipped up and confidently slurped the parachute hopper, but the success did not repeat as several refusals ensued. By now the sky was getting dark and some large gray clouds were building to the west and I could hear distant thunder. I didn’t think it would rain much so I ignored the weather for awhile, but then the rain intensified so I waded to shore and pulled my raincoat from my backpack and slid it on under my wader straps. I pondered the success on the parachute hopper and then the refusals and remembered that one of the fishing reports mentioned drakes as a hatch that was present. I’d seen them on the Big Thompson quite a few years ago. Fish have a long memory for green drakes, so could they be mistaking the gray parachute hopper for a green drake? 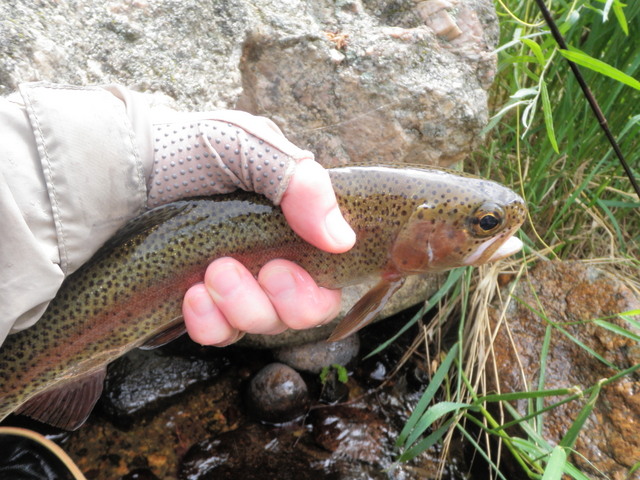 Another Nice Rainbow from Big T

I had nothing to lose so I pulled out one of the brand new parachute green drakes I’d tied this winter and tied it to my line. It looked great with a clump of long moose mane fibers for the tail and a white calf body wing that I colored gray with a marker and left the tip white for visibility. I applied floatant and flicked it upstream in a nice pocket and, wham, it disappeared in a confident swirl. Was this a tease like previous single hit flies? I continued casting the green drake and landed two more rainbows in the process, and I was quite excited by this discovery. Unfortunately the water wasn’t offering many good holding spots so I progressed quite rapidly to an area where another fisherman had just been so I decided to exit, return to the car, and drive to another location. 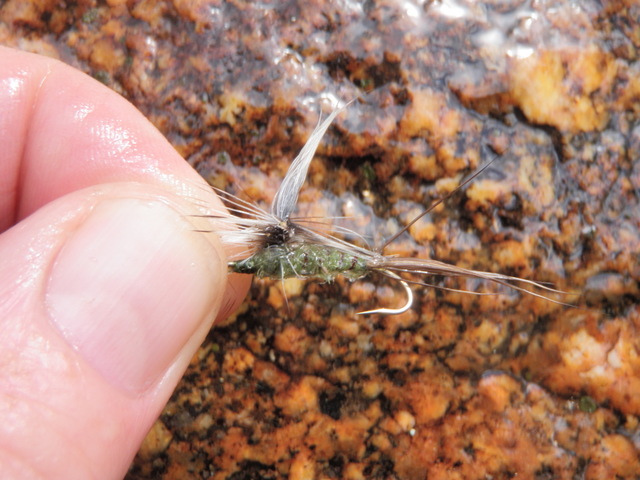 It continued to rain lightly as I drove further east on the highway and stopped at the small pullout just before the dirt road that leads to Grandpa’s Retreat. I jumped out of the car and grabbed my rod and gear and walkded down the dirt road until I spotted an RV parked along the shoulder. I wasn’t sure if this was a fisherman, so I decided to cut down to the water ten yards above the RV. I began casting the green drake but now the thunder grew louder and some flashes of lightning lit up the sky. The wind and rain picked up a bit, but I continued on and two more rainbows rose to the green drake. Unfortunately an increasing number of refusals were also occuring and it seemed I was covered more juicy spots with no reaction.

I had now landed nine fish so I focused extra hard to try and net number ten and this led me to an extremely juicy hole just down from the Santa Fe. I flicked the green drake to the foam line in the center of the hole and allowed it to drift right along the current seam to the tail. With my polaroid sunglasses I could see one, then two and then three rainbows rise to within six inches of the fly and then drop back down. I witnessed a triple refusal! It was clear that these fish were not going to be duped by the green drake so I ran through some fly changes….a light gray caddis, a lime green trude and an ant. They were having none of them and I was beginning to feel a bit chilled and it was approaching 3PM with no sign of let up in the weather so I called it a day and returned to the car.

In summary it was a slow day on the Big Thompson, but I at least unlocked the secret to some decent surface action in the afternoon. It was gratifying to see the success created by my parachute green drake invention. I was surprsed that the overcast and light rain didn’t initiate more hatching activity.