Location: Between Salida and Wellsville

A series of cold snaps passed through Colorado, and the unfavorable weather caused me to forego fishing for eight days, while I waited for warmer temperatures. I was certain that warm fall conditions would return, and I was prepared to take advantage. Although the high temperature in Denver was projected to reach only forty-six degrees on Thursday, October 11; I noted that the Arkansas River valley was warmer. A high of fifty-six in the Salida area encouraged me to make the long drive on Thursday.

In order to allow the air to warm up I departed Denver by 8:15, and this enabled me to arrive at a pullout along the Arkansas River below Salida by 11AM. I wore my long sleeved Under Armour shirt, fishing shirt, fleece and down vest and chose my New Zealand billed hat with ear flaps to keep my ears warm in the forty-two degree cold that was accompanied by brisk wind. I retained these layers until 3PM, when I returned to the car to move to another location, and I never overheated. I assembled my Sage four weight rod, since it offered length and stiffness to counter the wind. 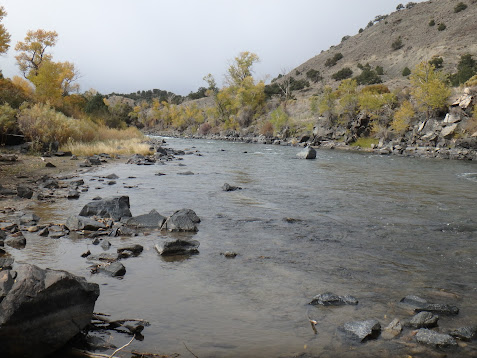 I followed a nice angled trail to the river and then hiked downstream for another two hundred yards, before I began casting at 11:30AM. I began my quest for trout with a dry/dropper configuration consisting of a tan pool toy hopper, 20 incher, and ultra zug bug. My first bit of action was a refusal to the pool toy, and then I connected with a small brown trout that grabbed the ultra zug bug and a small rainbow that snatched the 20 incher. I continued on my path upstream and added another small rainbow and brown trout to my count, before I adjourned for lunch in an area with large flat rocks. Numbers three and four nabbed the 20 incher. 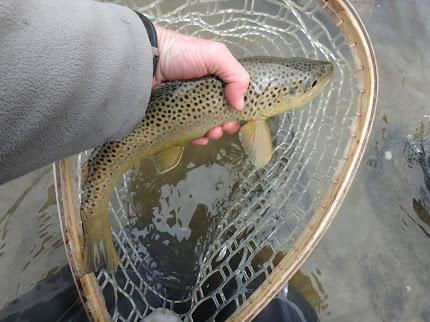 After lunch the slow catch rate continued, and the cloudy sky suggested that blue winged olive nymphs were active. I replaced the ultra zug bug with a RS2 to match the baetis nymphs, but after the change I speculated that I was drifting my flies over fish that ignored my offerings. Finally after an extended lull, I stripped in my line and converted to a deep nymphing approach with a split shot and indicator. During the changeover I elected to replace the 20 incher with an iron sally, and I tied the RS2 on the point. 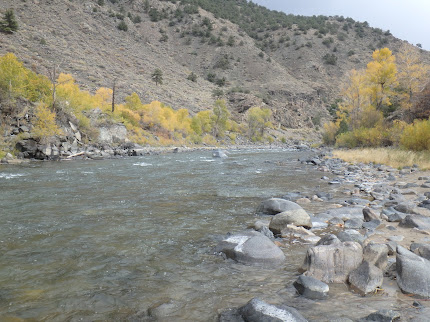 Immediately my fortunes improved. In a nice long riffle section of moderate depth an aggressive feeder latched on to the iron sally. The hungry aggressor went into battle mode, but eventually I dipped my net beneath a gorgeous fifteen inch brown trout. I was very pleased with this sudden dose of success. Between 1PM and 3PM I progressed upstream with the two fly nymphing rig, and the angling gods smiled upon me. I increased the fish count to eighteen by the time I reached the bridge, where US 50 crossed a small tributary stream. 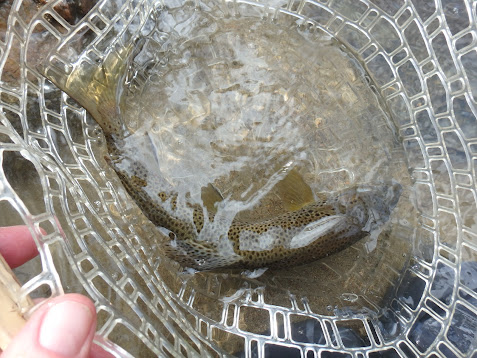 The most productive section was a fifty yard stretch that consisted of many pockets scattered among fast whitewater chutes. I prospected the deepest spots between the bank and the midpoint of the river, and quite often a brown or rainbow trout snatched one of the nynmhs, as they tumbled toward the tail of the target area. Fifteen and sixteen inch browns were the prizes during this time frame, and both favored the iron sally in relatively marginal pockets. Midway through this period of fast action, I broke off both flies, so I replaced the iron sally with another and swapped the RS2 for a sparkle wing version. Roughly half of the afternoon fish ate the iron sally, and the others were fooled by the RS2 or sparkle wing. It seemed that the bigger trout were attracted to the stonefly imitation, and smaller fish pounced on the size 22 baetis nymph. During my time on the Arkansas River six of the landed fish were small rainbow trout, and the rest were brown trout. 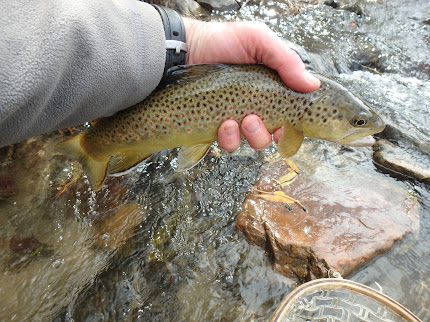 At 3PM I reached the bridge, so I passed beneath it and then circled back to the highway and crossed to the Santa Fe. The air temperature was now in the low fifties, but the wind velocity kicked up a notch. I was curious whether my nymph alignment might attract fish in another section of the river, so I drove downstream for an additional mile. I found a gradual path to the river and spent the next hour casting the nymphs to pockets and seams in a manner similar to the method that yielded fourteen trout in the early afternoon.

The shadows now covered the south side of the river, where I was positioned, and the wind accelerated appreciably. I skipped a long pool and covered the pocket water above and below. The catch rate slowed significantly, but I managed to add two small brown trout to the count, before I hooked the bottom nymph to the rod guide and returned to the car at 4PM. I am not sure whether to blame the slow action on the time of day, less desirable river structure, or a higher degree of angling pressure due to the ease of access. 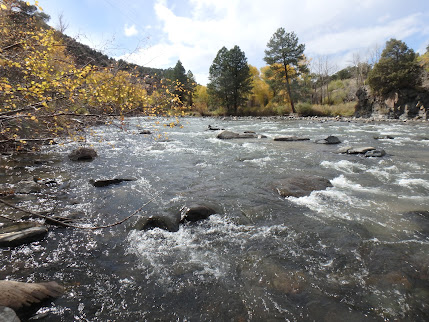 At any rate I enjoyed a very successful day on Thursday, October 11, 2018. Over the last two years I suffered through some fairly lean outings on the Arkansas River, and I was beginning to doubt my proficiency on the large body of water in Bighorn Sheep Canyon. A twenty fish day under fairly challenging conditions restored my interest in undertaking future drives to the Arkansas. The flows at Salida were 233 CFS, and this level was very low compared to average, but it translated into nearly optimal wading conditions. I was able to access parts of the river that normally can only be fished from a raft or driftboat. Three brown trout in the fifteen inch range certainly influenced my assessment of my day of fishing on October 11.