Day one in the Flattops exceeded my expectations, and after a night of camping at the South Fork Campground, I was poised to explore another piece of the White River system on Sunday. Historically the South Fork has proven to be more challenging than the North Fork, and I was unsure which face it would show me in 2019. The more remote and slightly larger South Fork is normally more temperamental and requires adherence to a defined strategy in order to achieve consistent success. Could I attain above average results during my one day visit to the South Fork in 2019? Read on. 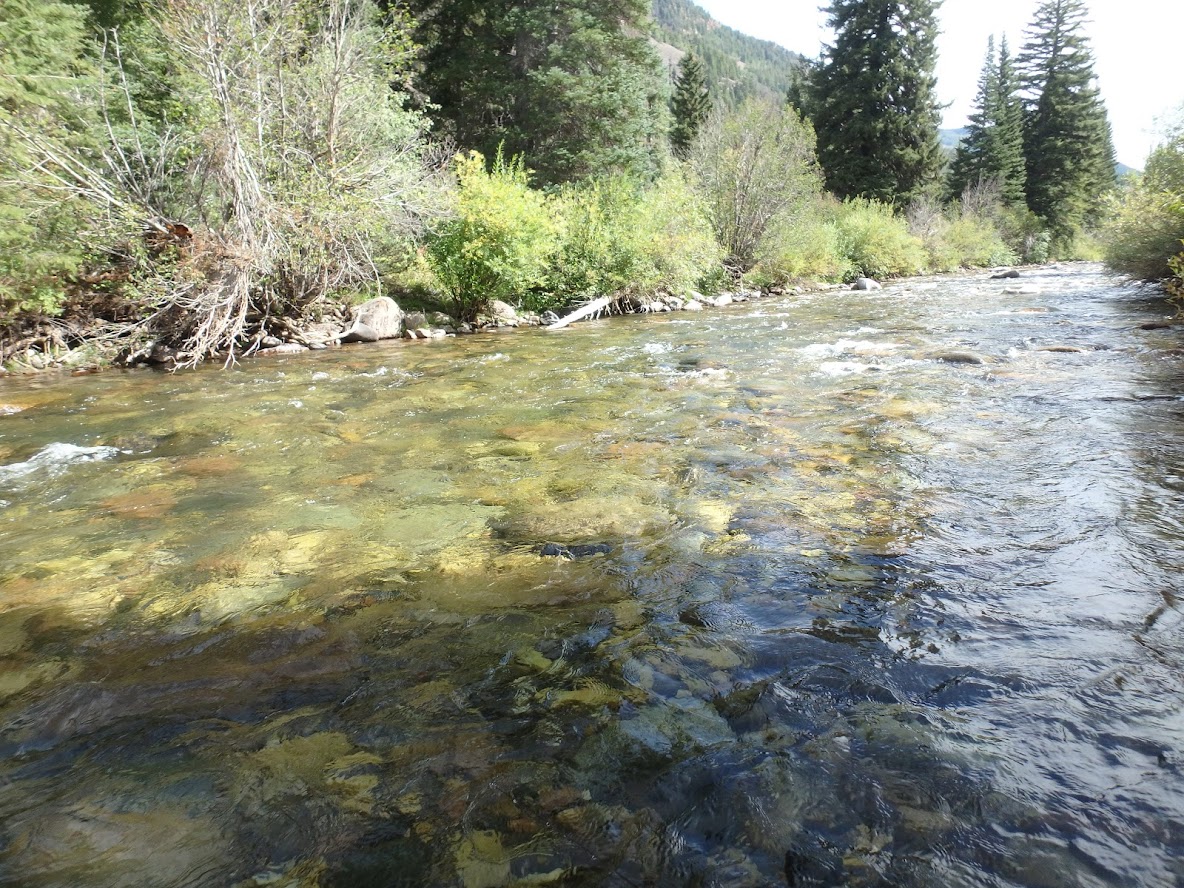 Since my retirement four years ago, I usually confine my fishing and camping adventures to weekdays, but I violated my policy with this Flattops trip over the weekend. I had a commitment for the end of the next week, and desired to fit in four days of fishing before then, thus I began on Saturday. That choice backfired somewhat when a couple of campers in a RV played loud country and western music into the early hours of the morning, and I woke up three or four times to the sound of deep throbbing bass. I considered accosting them on the matter, but sadly in this day and age I feared a violent reaction and sacrificed sleep for personal safety. I remain appalled by how inconsiderate people can be. 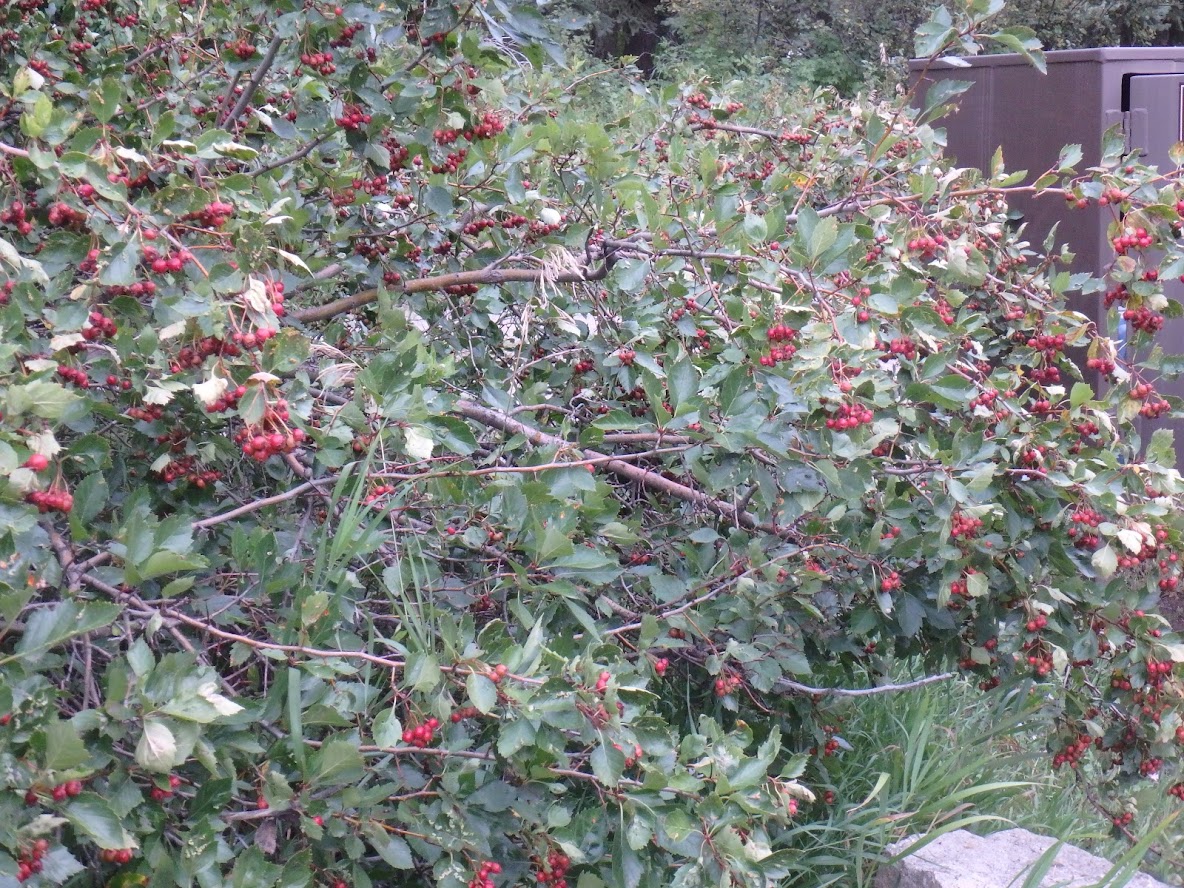 Do Bears Eat These?

Sunday was a gorgeous day, although it was quite chilly, when I woke up at 7:15AM. The air temperature was around forty, until the sun rose above the hill to the east. The high for the day was in the mid-seventies. As a result of camping near my destination I was in the stream and prepared to fish by 10AM. 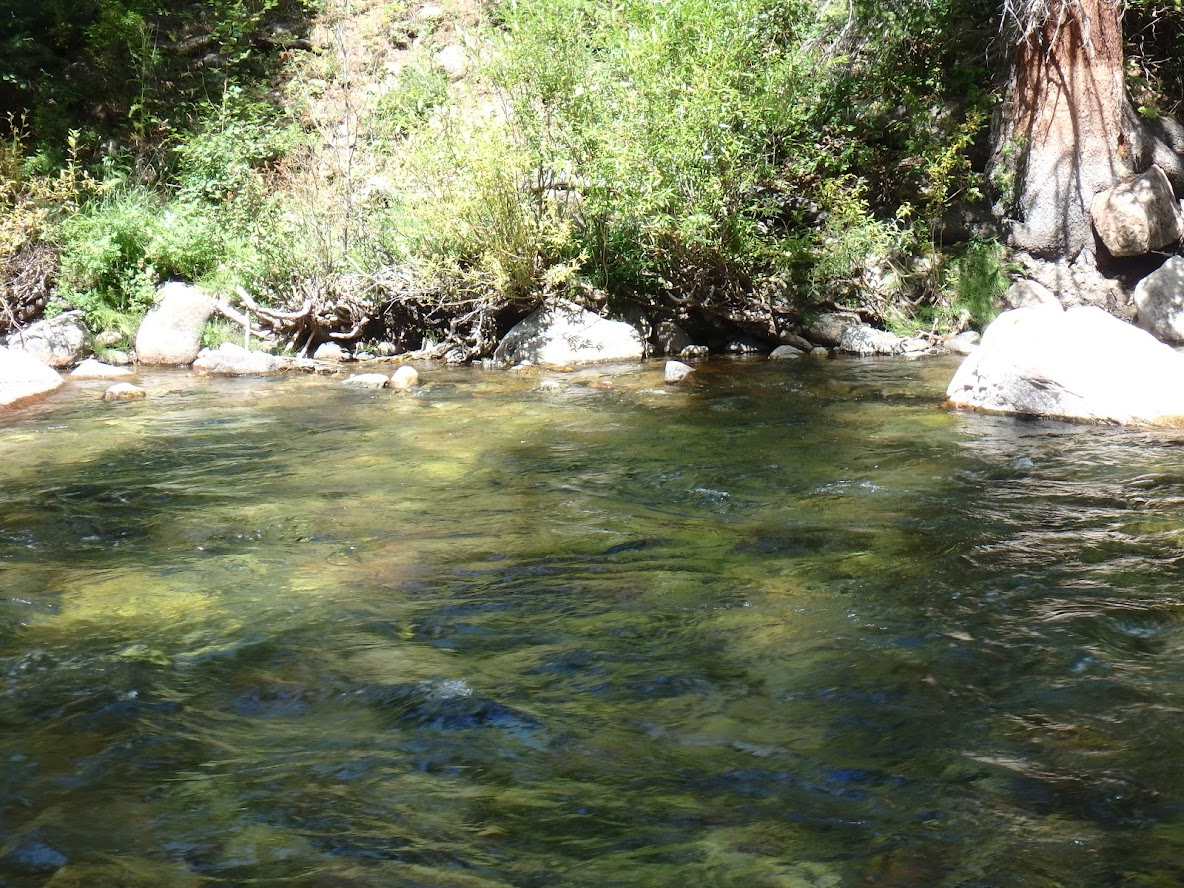 I used my Sage four weight in case of wind and big fish, and I began with the alignment that produced excellent results on Saturday; a tan pool toy hopper, ultra zug bug, and salvation nymph. I landed eight rainbow trout by the time I stopped for lunch, and I only managed three in the first hour, and all were relatively small fish in the eight inch range. One of the five between eleven and twelve o’clock was a feisty specimen that measured twelve inches. 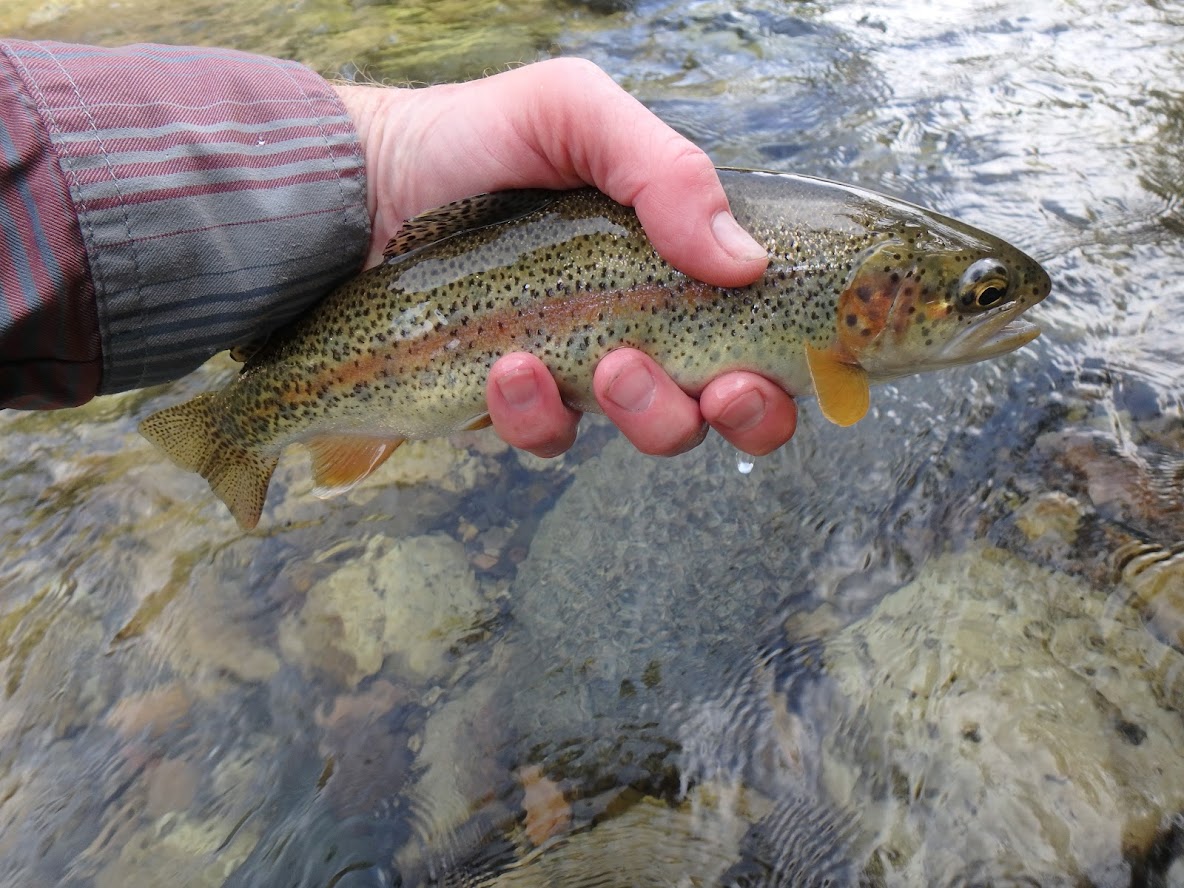 I Love the Orange Fins

After lunch I began to experiment with different flies in the upper nymph position. Flies positioned above the salvation were a dark Cahill wet fly, a pheasant tail nymph, an iron sally, and a prince nymph. The dark Cahill produced a nine inch rainbow and the prince nymph accounted for a pair of thirteen inch ‘bows. Over the course of the day the ultra zug bug delivered two trout to the net, and the pool toy hopper generated two, and this left the salvation responsible for seventeen trout. It was without a doubt the most popular fly on the South Fork. 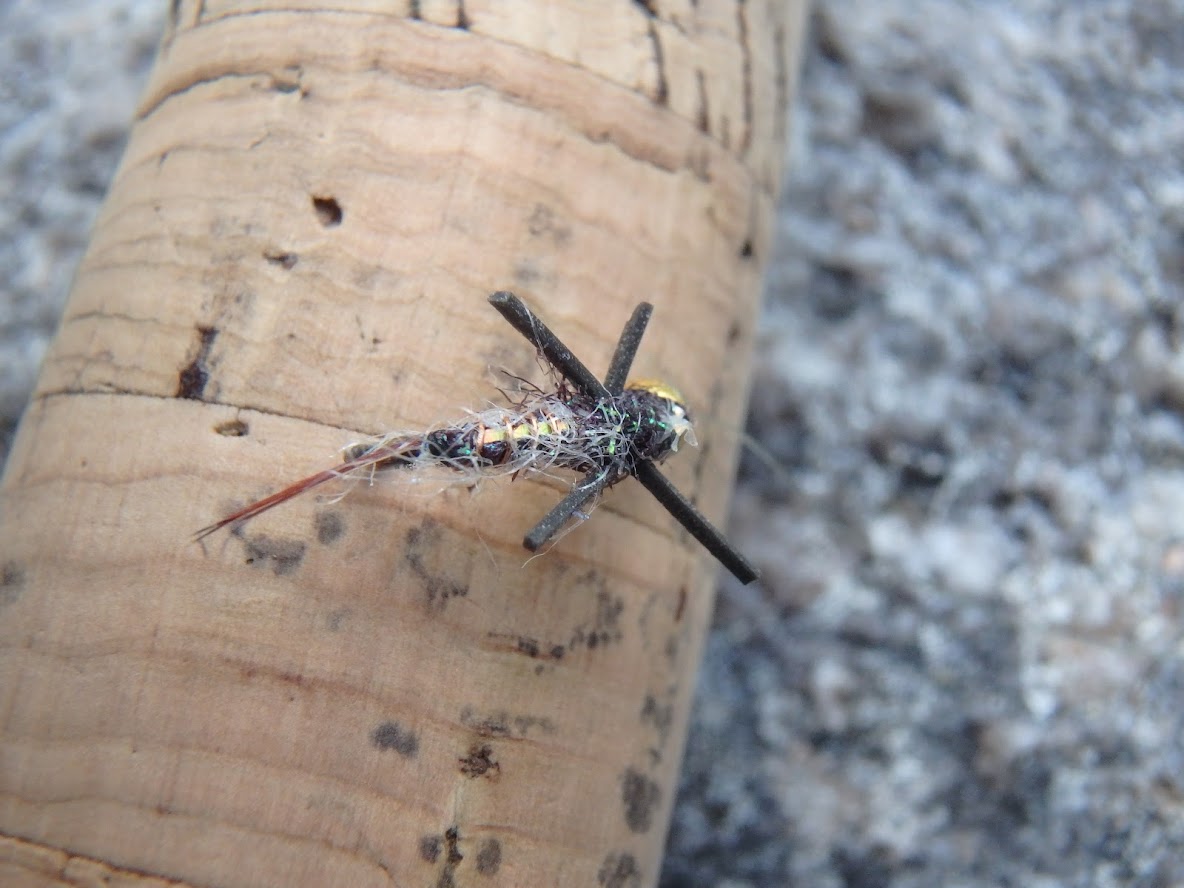 The Most Productive Fly on Sunday, a Salvation Nymph 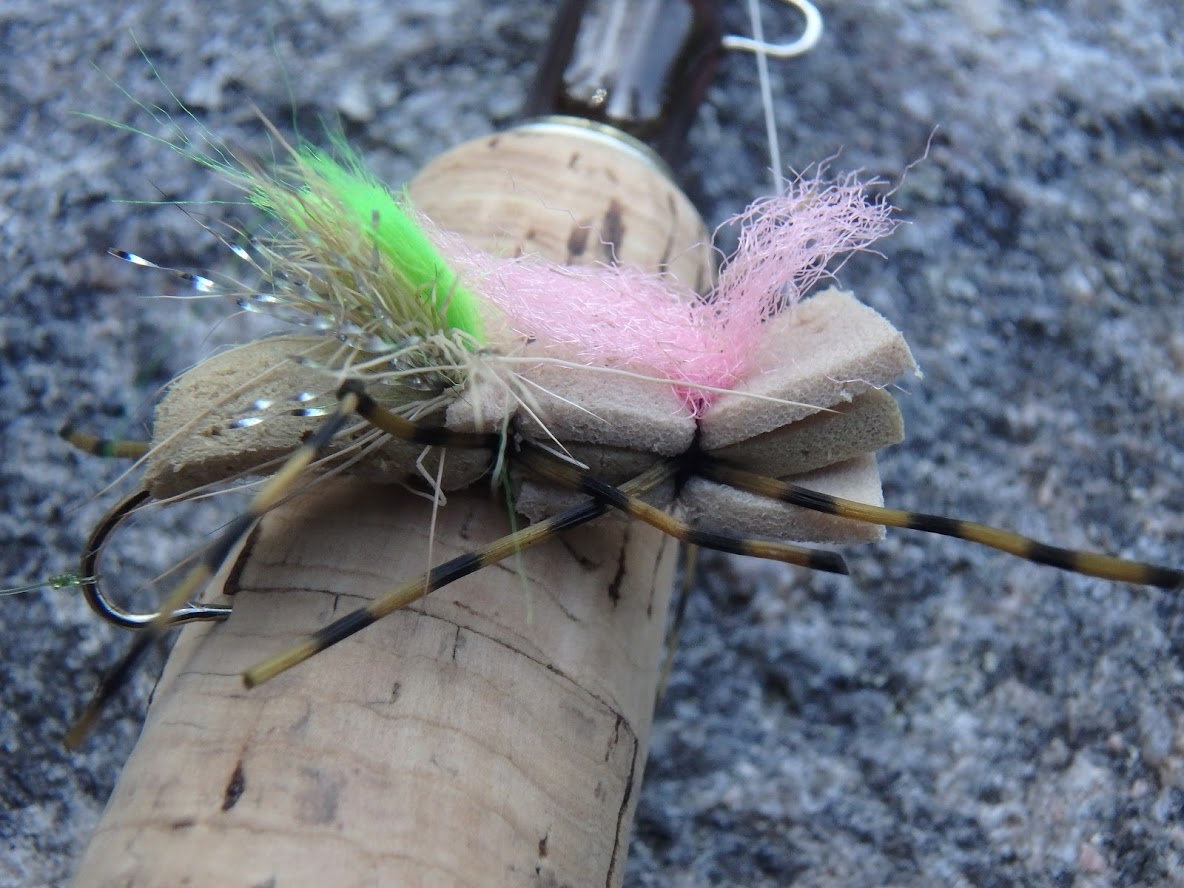 The South Fork stayed true to form, as I covered a ton of water in my pursuit of twenty-four fish. Wide shallow riffles were obvious time wasters, and I waded around several long sections that met this definition. I sought stretches, where the stream bed narrowed; and this created deep troughs, long pockets, and riffles of moderate depth. These were the places that fish preferred, and success hinged on disciplining oneself to focus on spots, that matched these descriptions. I landed my best fish in narrow deep slots near the bank, and the rainbows attacked the salvation as it began to swing or lift. 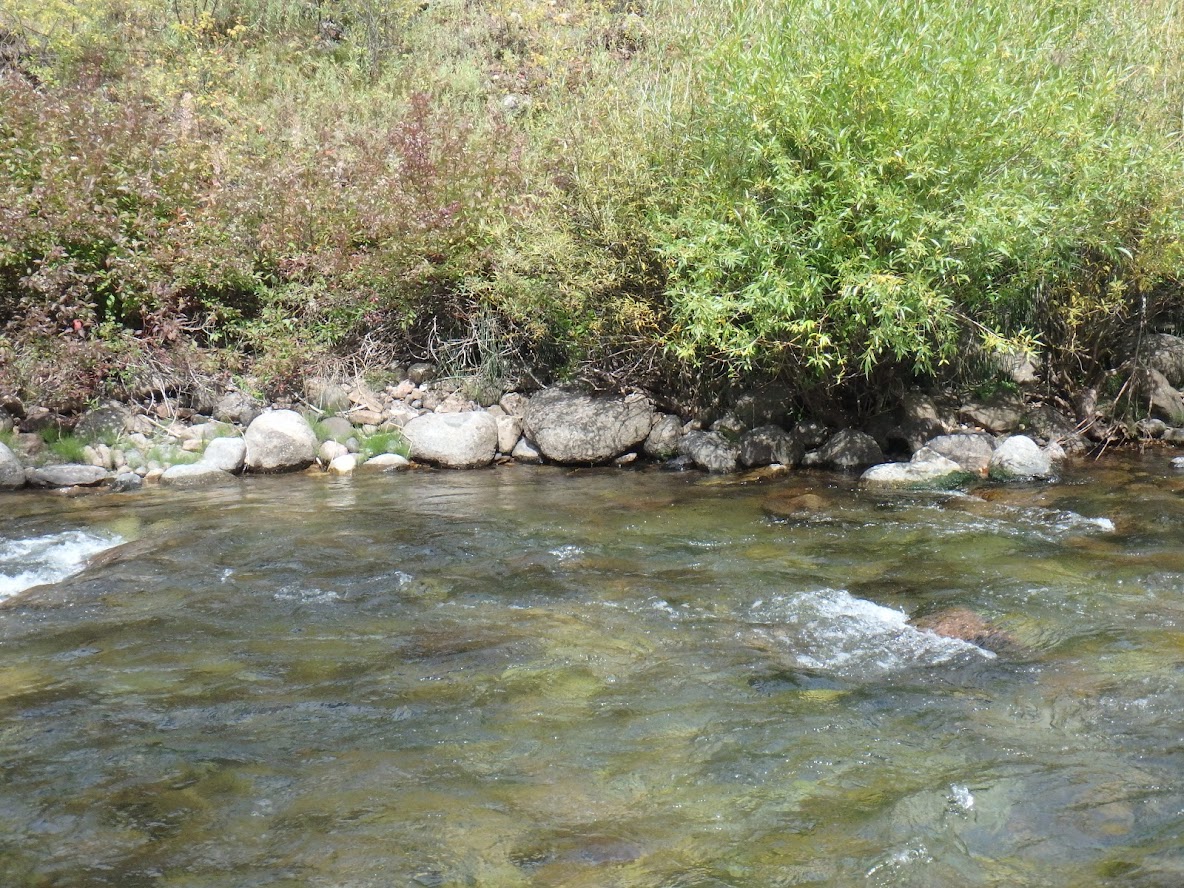 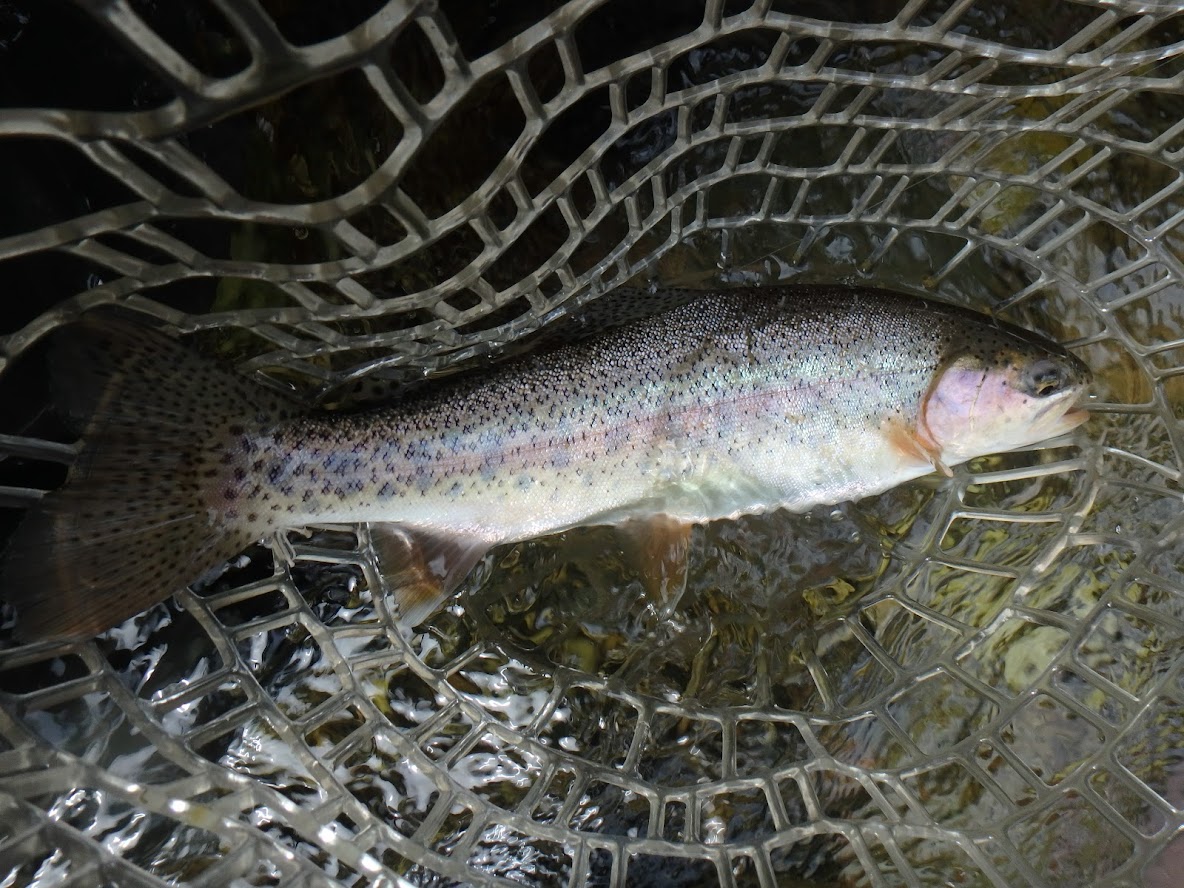 No End to Rainbows

The disciplined approach did not always yield success, as I cast to numerous attractive areas that met the definition of productive with no results, and I never totally solved the puzzle of where to concentrate my efforts. 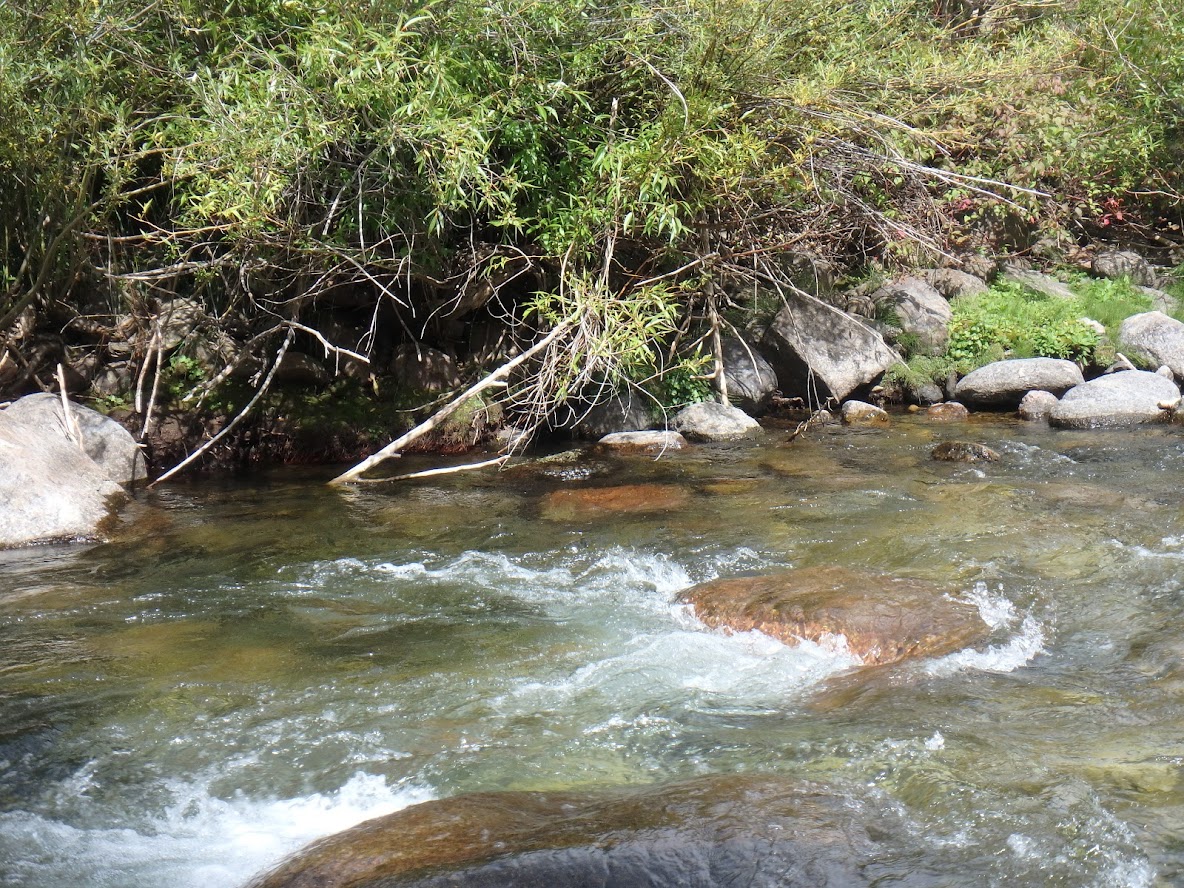 Deep Along the Edge 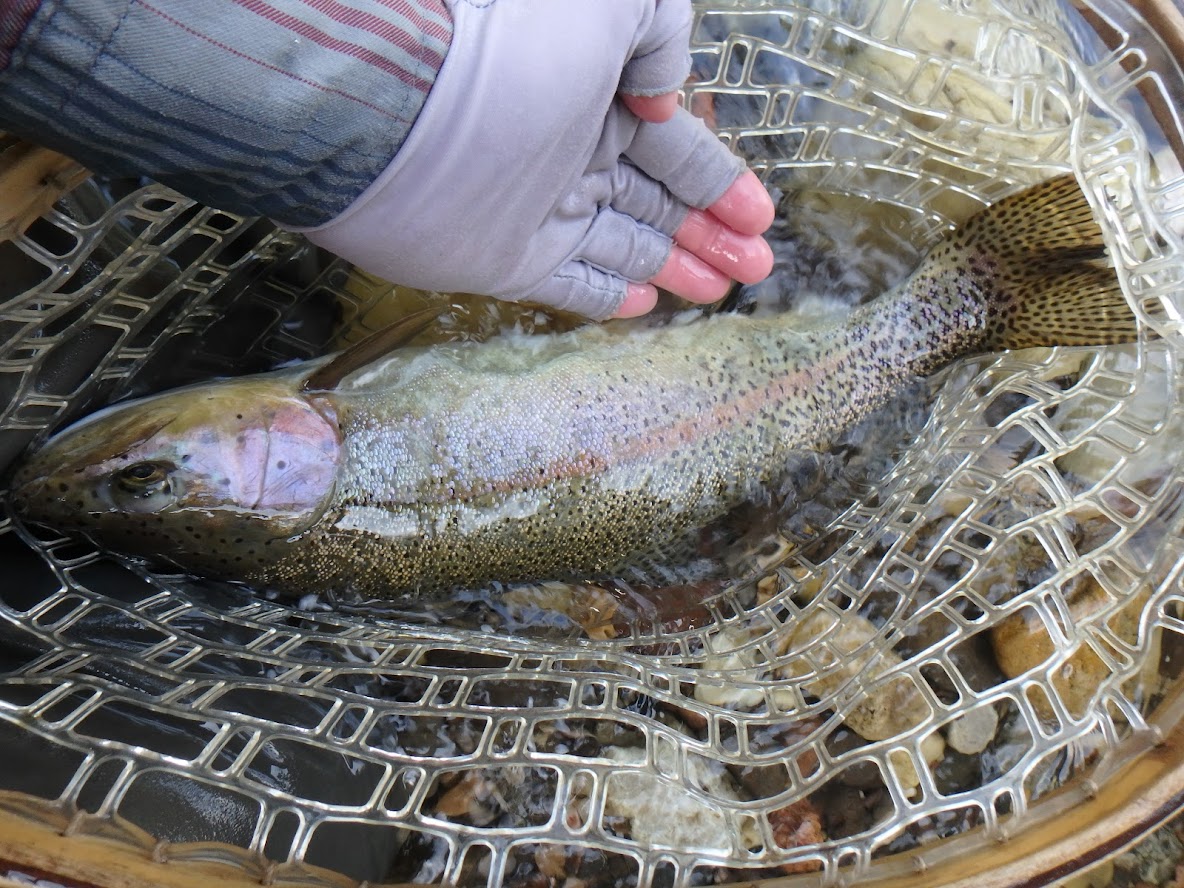 At 2:30PM I noticed a fairly marginal slot along the north bank. I lobbed a cast into some fairly fast water, and as the pool toy bobbed along the narrow and deep channel, it came to an abrupt stop. I was certain that one of the nymphs snagged a branch, but I lifted just in case and felt some movement through my fly rod. Was it a fish, or was I moving the stick in the current? After a few seconds it was clear that the object on my line was alive, as my rod tip was tugged upstream at a slow rate. Unlike most rainbows, this fish was moving slowly and staying deep, and I was convinced that a massive whitefish inhaled one of my nymphs. After a ten foot upstream move at a relatively slow pace, I managed to turn the fish, and I caught a glimpse of my largest fish of the day. With extra side pressure applied, the fish accelerated its pace and initiated escape tactics. First, it swam downstream to the edge of some faster water. I applied steady and strong pressure and prohibited it from reaching the spill over below me. Next the wide body executed a series of rolls on the line, but I countered this by lifting the head out of the water, and I gradually guided the striped prize into my net. There before me rested a sixteen inch wild rainbow, but the width and girth were the most impressive aspect of the fish. The muscular rainbow was easily the largest fish of the trip so far, and fighting it was a strenuous test of my rehabilitated elbow. 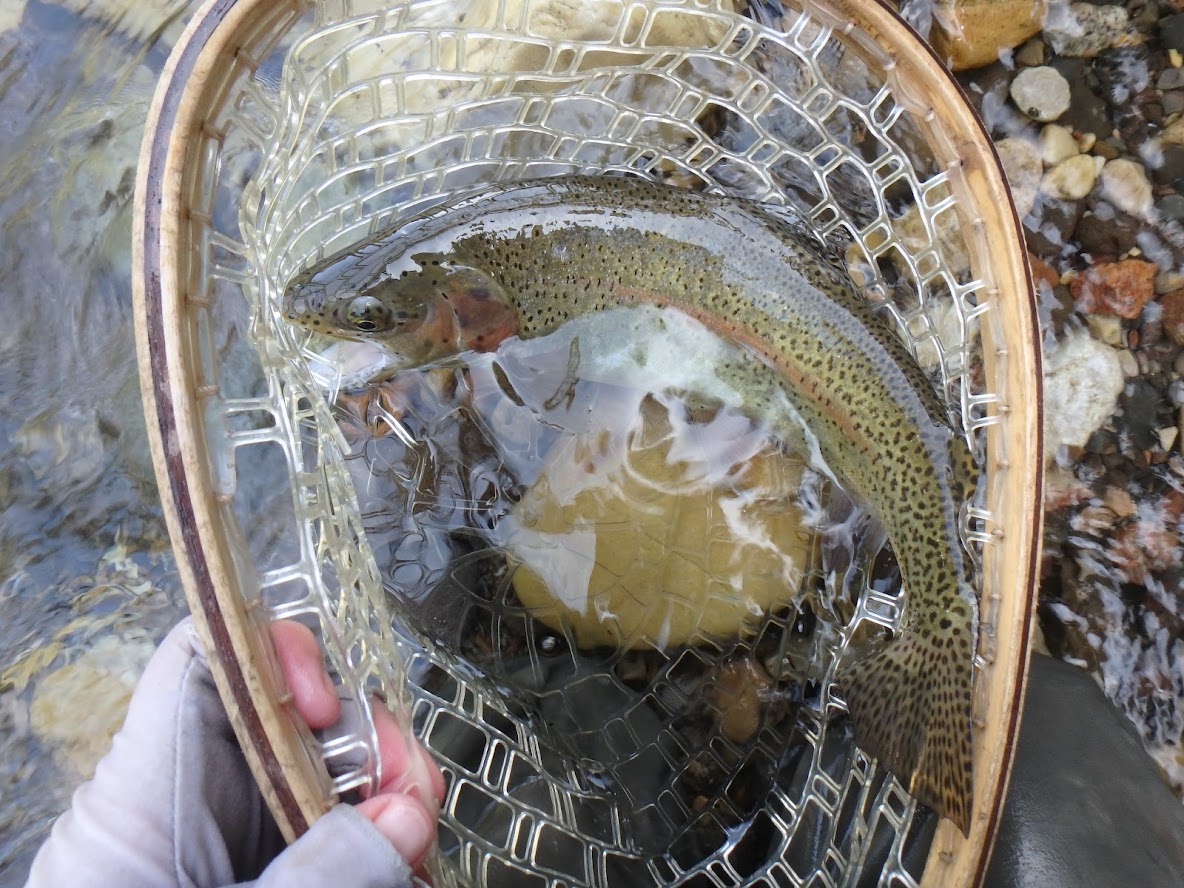 Sunday was a fun day on the South Fork of the White River. Twenty-four trout in six hours of fishing is respectable, but I continued to struggle with my ability to identify productive water on the large backcountry enigma. 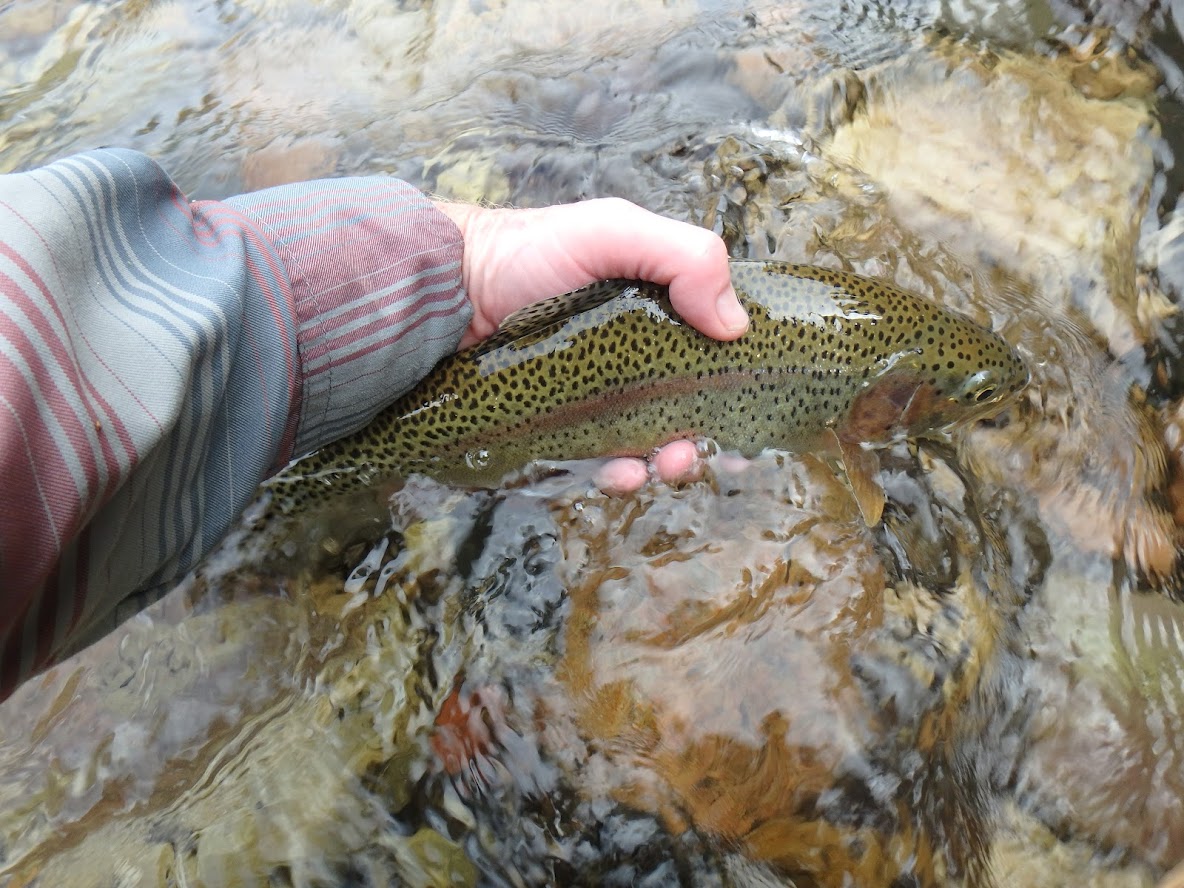 In addition to the sixteen inch battler that I described above, I landed a pair of thirteen inch beauties and quite a few spunky twelve inchers. The remainder were wild ‘bows in the seven to eleven inch range. A double digit day on the South Fork requires on abundant amount of wading and casting, but nice fish are there, if you are willing to work. 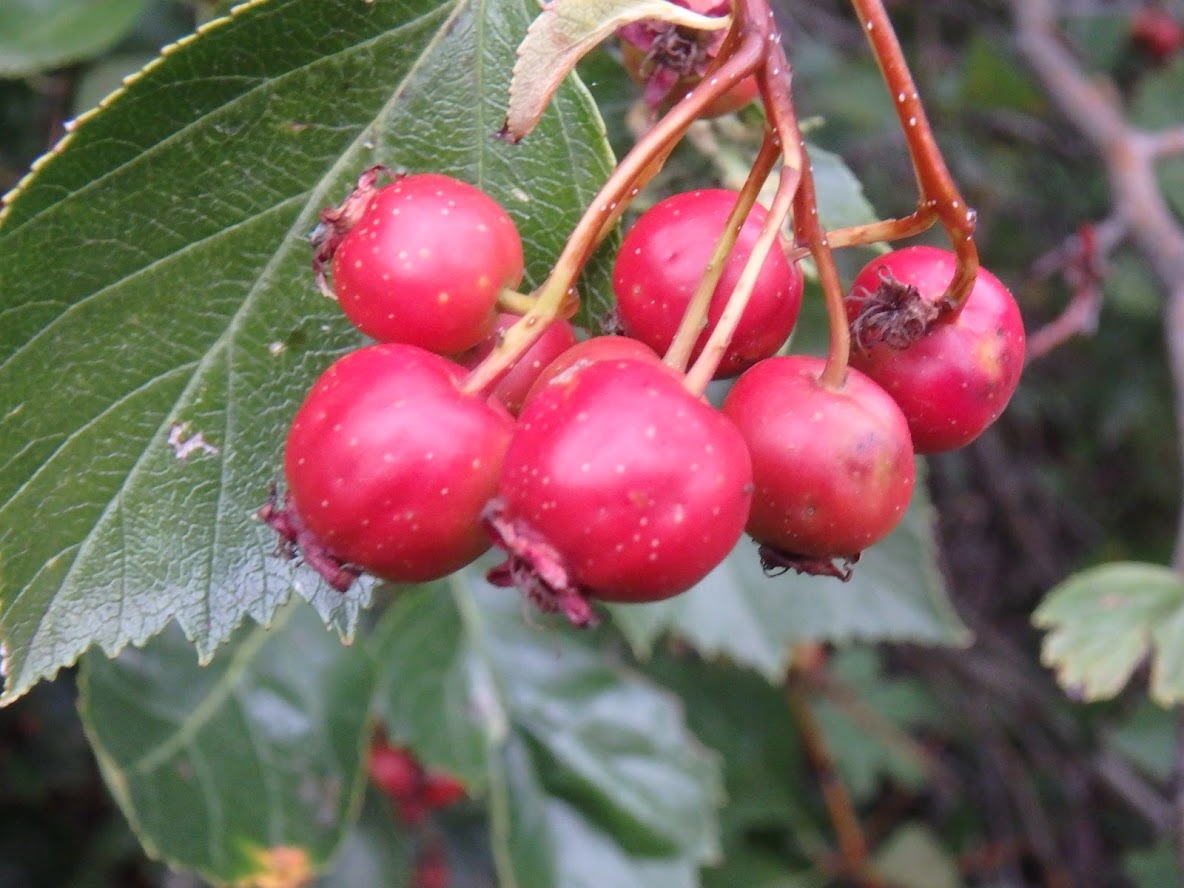 Berries Next to Campsite