I fished this remote backcountry stream twice previously with the most recent visit on 08/06/2019. During that trip I hiked 2.1 miles from the trailhead, and after fishing for .4 miles I entered a canyon with very steep sides. In order to return I was forced to wade along the edge of the stream, until I reached my original entry point. Upon my return home I pulled out a topographical map and researched the area, and I noticed that the trail veered away from the creek at my starting point, and then after approximately .5 miles it made a big bend and merged back with the blue line that represented the creek. I concluded that I should have pressed on, and in doing so I would have intersected with the trail, and this would have enabled an easier return hike.

Since I was camping within a reasonable distance of Elk Creek, I concluded that this allowed for an early start, and if I moved at a steady pace, I could achieve my goal of fishing through the canyon to a point, where access to the trail made my return hike a relatively reasonable proposition. The most interesting aspect of my fly fishing outing on August 28 was the contrast between my plan and the circumstances that actually unfolded. The fishing was superb, and I will get to that later in this post, but first an account of my exit adventure from a remote high country stream.

I began fly fishing at the 2.1 mile mark, just as I did on 08/06/2019. As I planned, I moved at a steady pace, and by 2:30 I advanced beyond my farthest penetration on my last trip. The area that I entered was characterized as a massive boulder-strewn cascade with steep canyon walls on both sides. The only way to advance upstream was to clamber over the huge rocks, and the difficulty of this process was enhanced by the cold water that spilled and sluiced through the gaps in the high gradient setting. 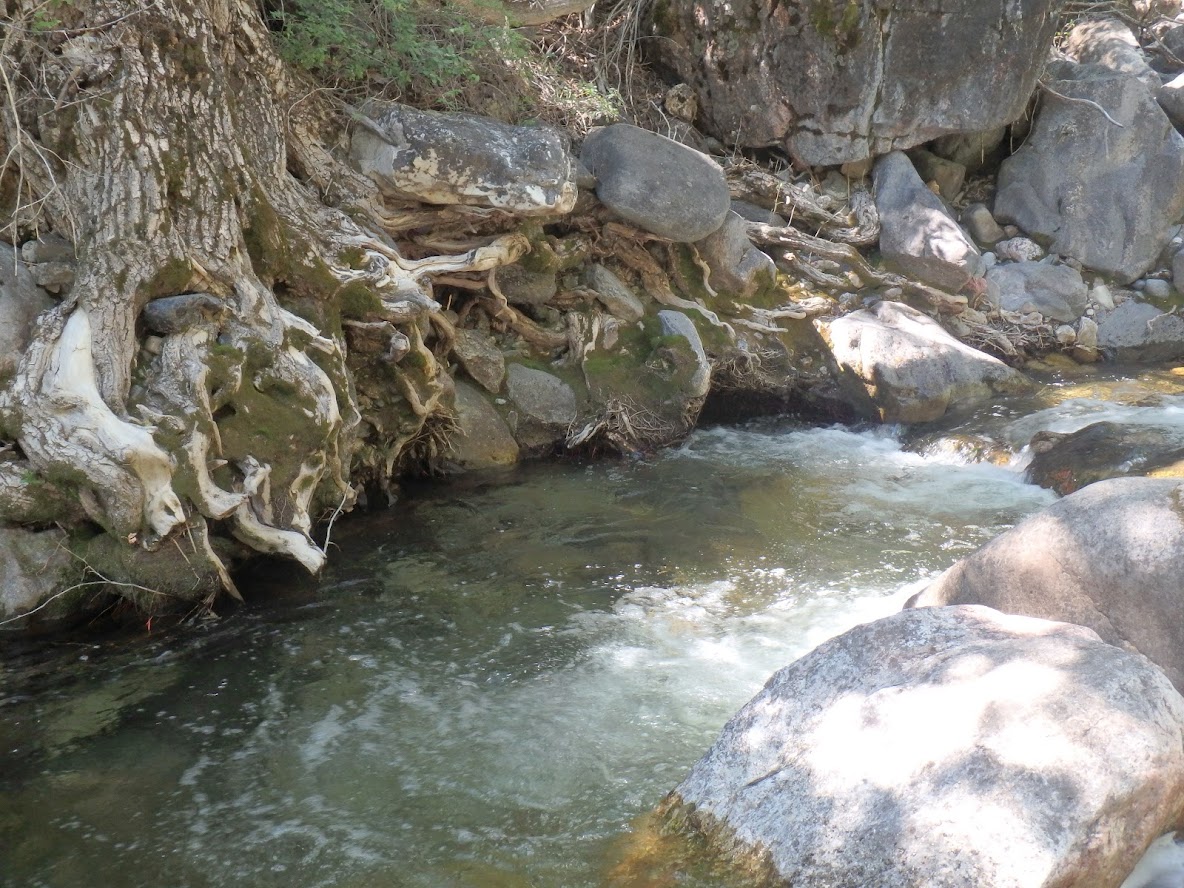 During the early phase of negotiating this terrain I paused at nearly every attractive plunge pool to fish, and the results were impressive; however after an hour of this I glanced at my watch and noticed that it was 3:30, and the boulders were not going away, and the canyon walls were not becoming more gentle. I was faced with attempting to press on to find the trail or reverse direction and wade back down the cascade to my entry point. I tend to be a very goal oriented person, so I opted to press on…for awhile.

The difficulty of this task swelled exponentially. The canyon narrowed, and this topography concentrated the water in the center of the boulder field, and the boulders became larger. I found myself, at times, climbing waterfalls. Fortunately I was wet wading, because my waders would have filled with water during many of my climbing maneuvers. On several occasions I placed my fly rod on top of a large rock, and then I used my arms to pull my body weight up to a point, where I could extend one of my legs to the crest of the rock and pull myself over the top. My net, wading staff and fly rod constantly wedged in crevices or snagged on sticks and branches, and this slowed my progress and added to my frustration. By four o’clock it became apparent that reaching the point where the trail bordered the creek would remain an unfulfilled goal. The cascade and waterfall stream structure was not changing as far as I could see, and the east wall of the valley that bordered the trail was unrelenting in its pitch. I surrendered to the backcountry and decided to reverse direction. 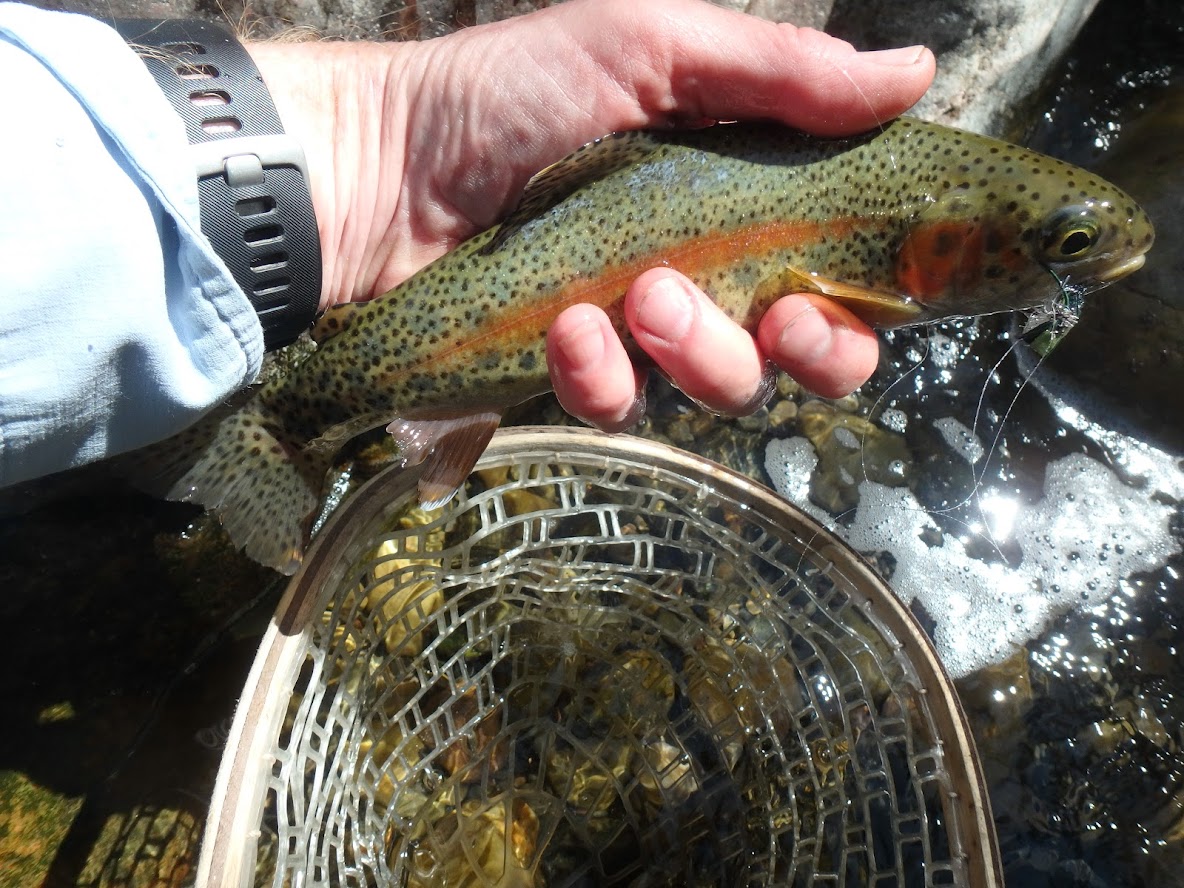 Even this decision was fraught with downside. The waterfalls and cascades that I worked so diligently to climb now posed serious threats to my safety, as I slid down churning chutes and falls. Again I used the technique of lowering my body to within a couple feet of the water and then dropped the final distance to the creek bed, while water gushed against my backside. At one point I thought I found a place, where I could scale the steep angled bank, but after scrambling up the slope for ten feet, I realized that farther progress required me to traverse an extremely narrow ledge above a steep section of loose soil. I wisely came to my senses and gave up on this risky course of action. 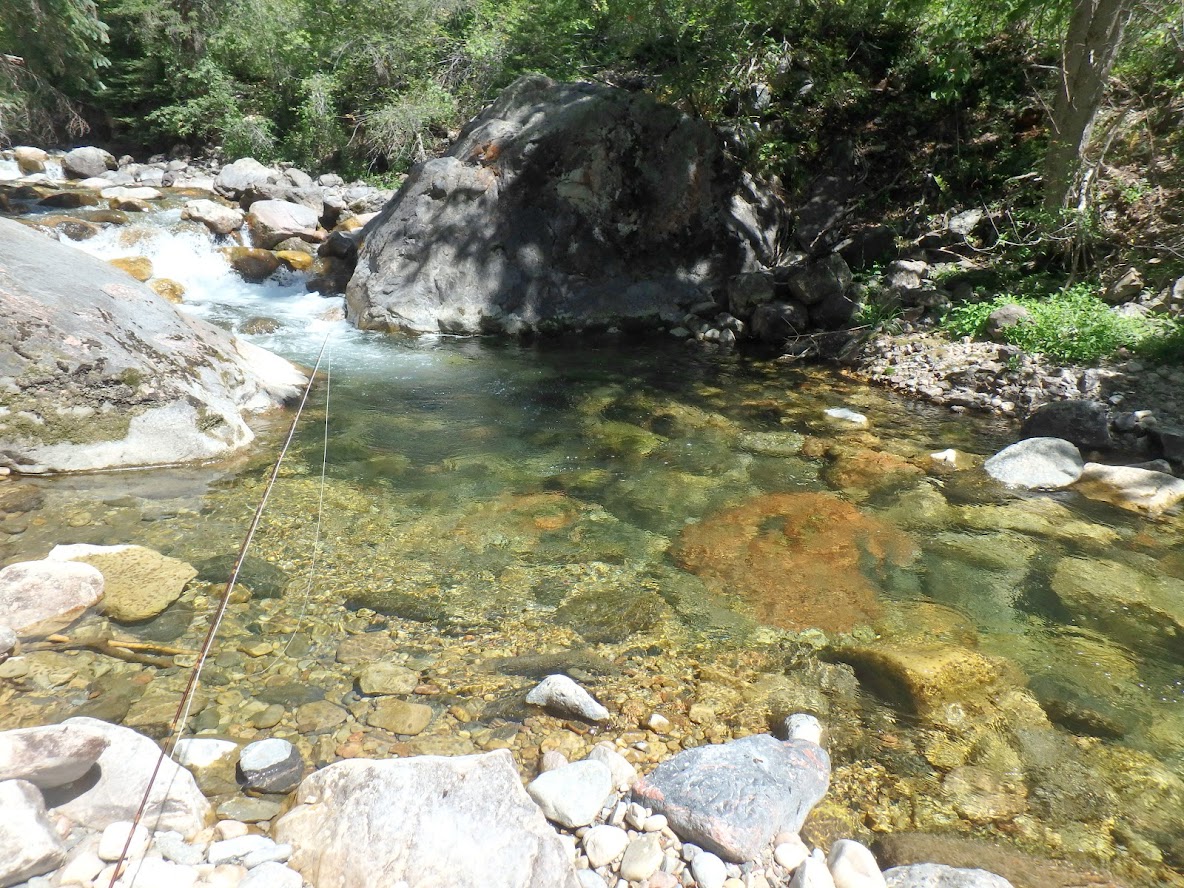 Progress was slow, but I reminded myself that plenty of daylight remained, and I moved on with caution. Once again I stared at the east bank, and I found another place where the angle of the slope was less than other insurmountable places. The impediment to this path was a fifteen foot section that was quite steep, but if I could attain the crest, it appeared that the slope diminished beyond. I decided to give it a try, and I chose a line, where I could grip sturdy saplings and a curved tree stump to pull my weight upward, while I dug my toes into the loose ground. It worked! I crested the bank and anxiously peered upward to assess my next move. I was now committed to continuing the search for the official trail, since sliding back down to the creek was not a safe option. 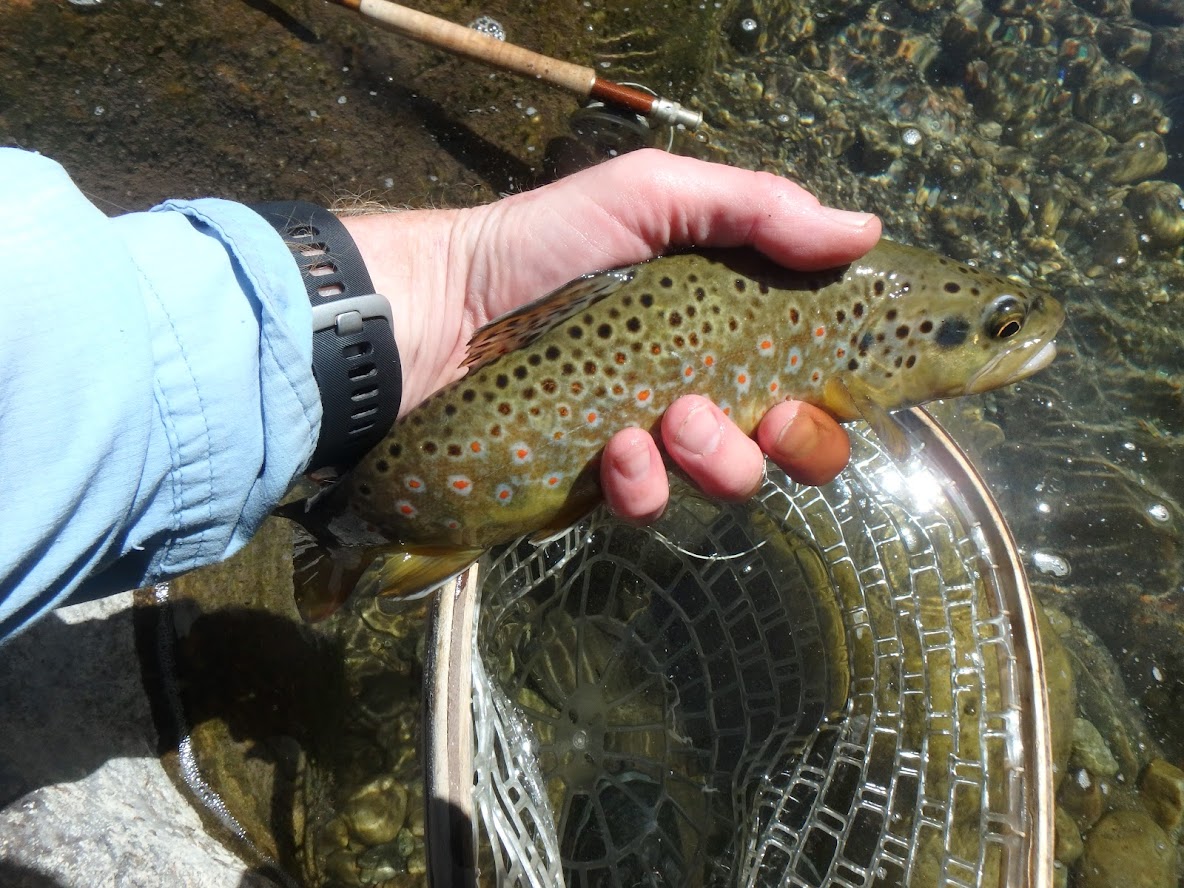 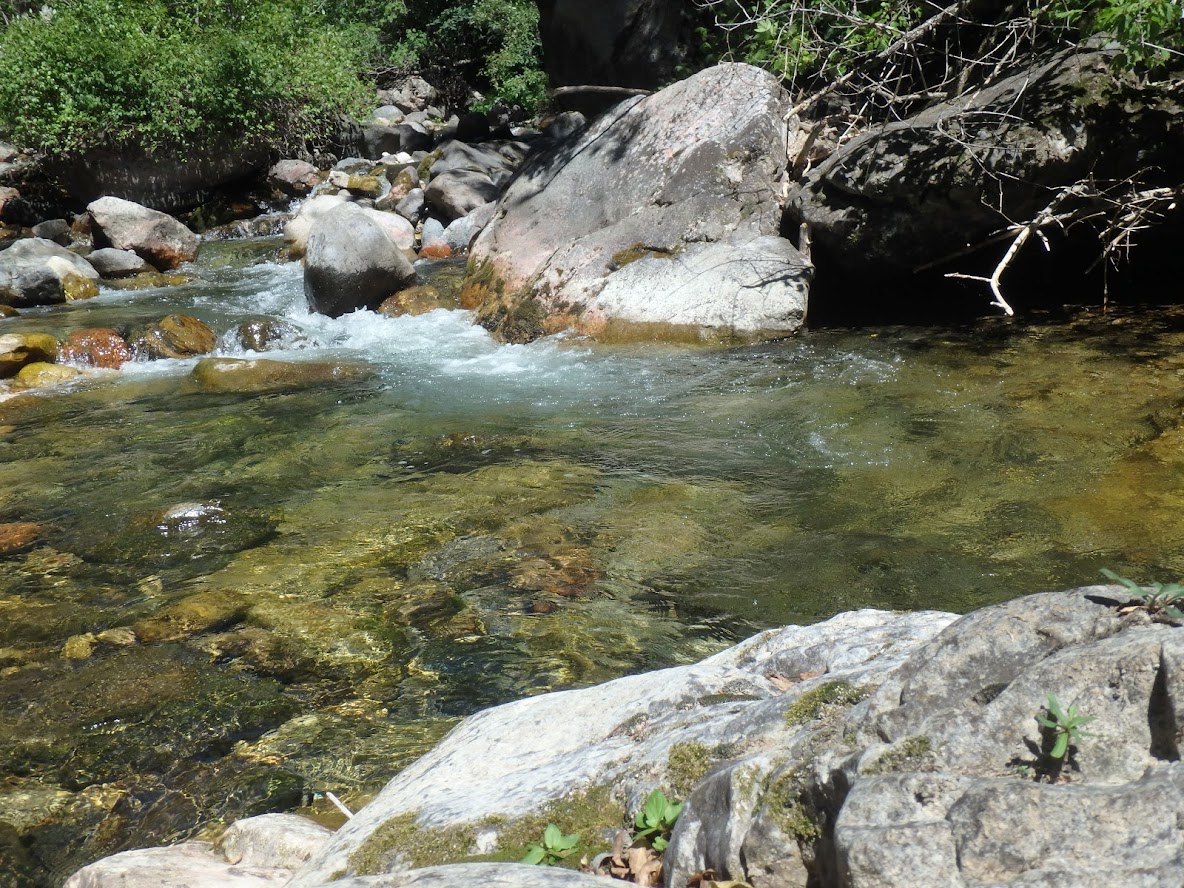 Where to Cast First

My next obstacle was a large area covered with scrub oaks. Scrub oaks are low trees that rarely grow to a height of more that fifteen feet. They spread out and possess very stiff limbs with rough bark, and I began to wend my way through the forest of scratching, grabbing scrub oak trees. The coarse limbs poked me and clutched at my net and fly line, but I gradually found a path through the shortest of the obstinate trees. After fifty yards of strenuous ascent through the thick woods, I spotted some tall evergreens, so I veered to the right and managed my way through some taller oaks by holding my fly rod as high as possible above the branches and foliage. During this entire time I checked my hemostats, nipppers and floatant tube every few seconds to make sure they were not confiscated by the unrelenting brush. 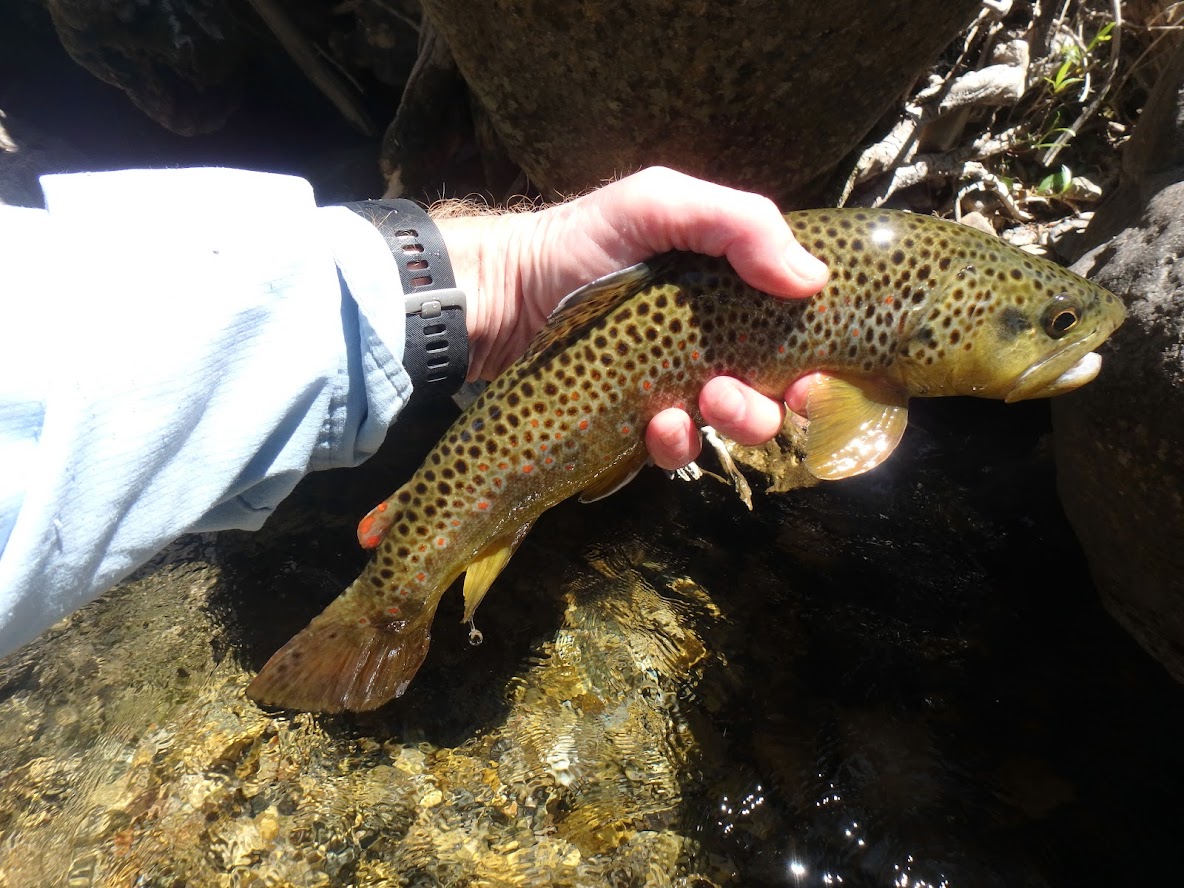 I made it to the tall evergreen trees, and they were situated in a small gully, and the tall trees apparently provided shade, and this reduced the density of the vegetation. I made a sharp left turn and proceeded upward through the depression for thirty yards until I once again crested a short bank and found myself in a clearing, and running through the center of the open space was the trail!

I heaved a sigh of relief and gulped ten swallows from my hydration bladder and began the return hike. I used my Garmin watch to clock the return trek, and I arrived at the trailhead parking lot after 2.5 miles. This meant that I only covered .4 miles during my upstream progression, and I faced a minimum of .2 miles, until I met the trail. I failed to incorporate climbing waterfalls and scrambling over huge boulders into my plan. 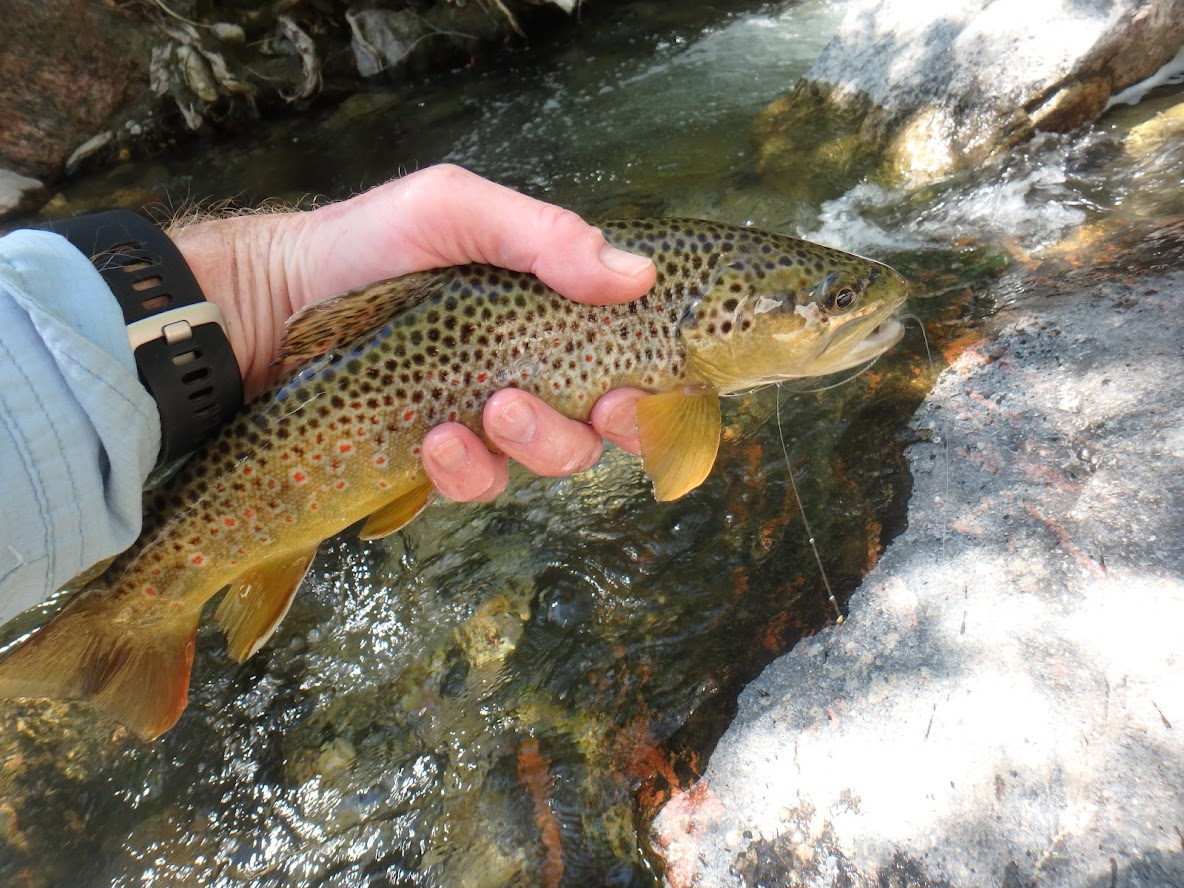 Was the risk and strain of this adventure worth it? Allow me to return to the fishing. When I arrived at the stream after the inbound 2.1 mile hike, I configured my line with a tan pool toy, ultra zug bug, and salvation nymph. I spent twenty minutes prospecting the likely pools with these offerings and managed to land two small brown trout on the salvation nymph. Unfortunately these positive results were overshadowed by the frequent refusals and long distance releases that plagued the first twenty minutes on the creek. I was passing through quality water and had very little to show for my efforts.

I paused and decided to make an adjustment. I swapped the pool toy for a peacock hippie stomper and retained the salvation nymph in a single dropper set up. I hoped that the smaller stomper would be more acceptable to the small stream residents and additionally would not disturb the pools as readily as the size 8 pool toy hopper. The single nymph was a hedge in case the trout opportunistically favored subsurface food items. I am not sure whether my reasoning was sound, but I persisted with this lineup throughout the remainder of the day. I built the fish count to twenty-seven, and the species split was five rainbows and twenty-two brown trout. The hippie stomper and salvation nymph accounted for landed fish in roughly a 50/50 ratio.The catch rate was steady, and enough larger than average trout approached my flies to maintain my vigilant focus. 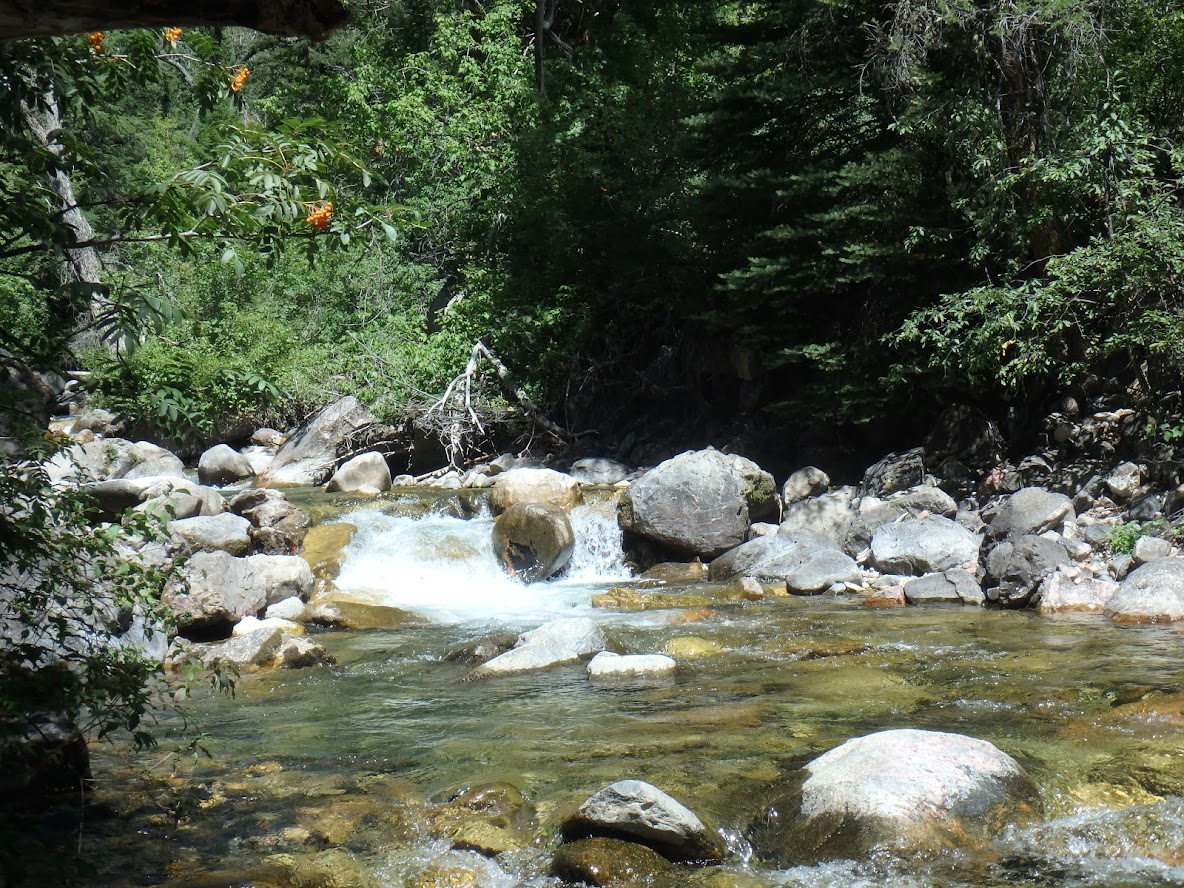 Toward the end of the day I encountered a very deep plunge pool in the center of the boulder field. A large plume of water spilled over some large rocks and cut a deep frothy run through the center of the 15′ X 15′ pool. A small slow moving 4′ X 4′ eddy existed on the side nearest to me, and a more appealing shelf pool spanned out from the center run on the opposite side. I had my eye on that area as the prime fish holding location, but I decided to drop an obligatory short cast to the nearby eddy. The hippie stomper stalled in the eddy, and as I looked on, a huge head and mouth slowly appeared and drifted up to nip the foam attractor. I waited for a split second, and then lifted the rod and connected with the brown trout for a split second. I was certain that this fish was put down for at least a week by my premature hook set, but for some reason I dropped another cast into the tight pocket. No response confirmed my suspicions, but for some inexplicable reason I executed a few false casts and placed the hippie stomper back in the eddy. The same large head reemerged but at a somewhat faster pace, and a seventeen inch brown trout engulfed the size 14 peacock stomper. The large combatant put up a brief tussle within the confines of the small pool, before I hoisted it into my net. The fact that this trout ate a second time after being pricked on the first attempt indicates to me that fishing pressure is nonexistent on this backcountry stream. The image of this large brown trout in the tiny plunge pool still sends chills up my spine. 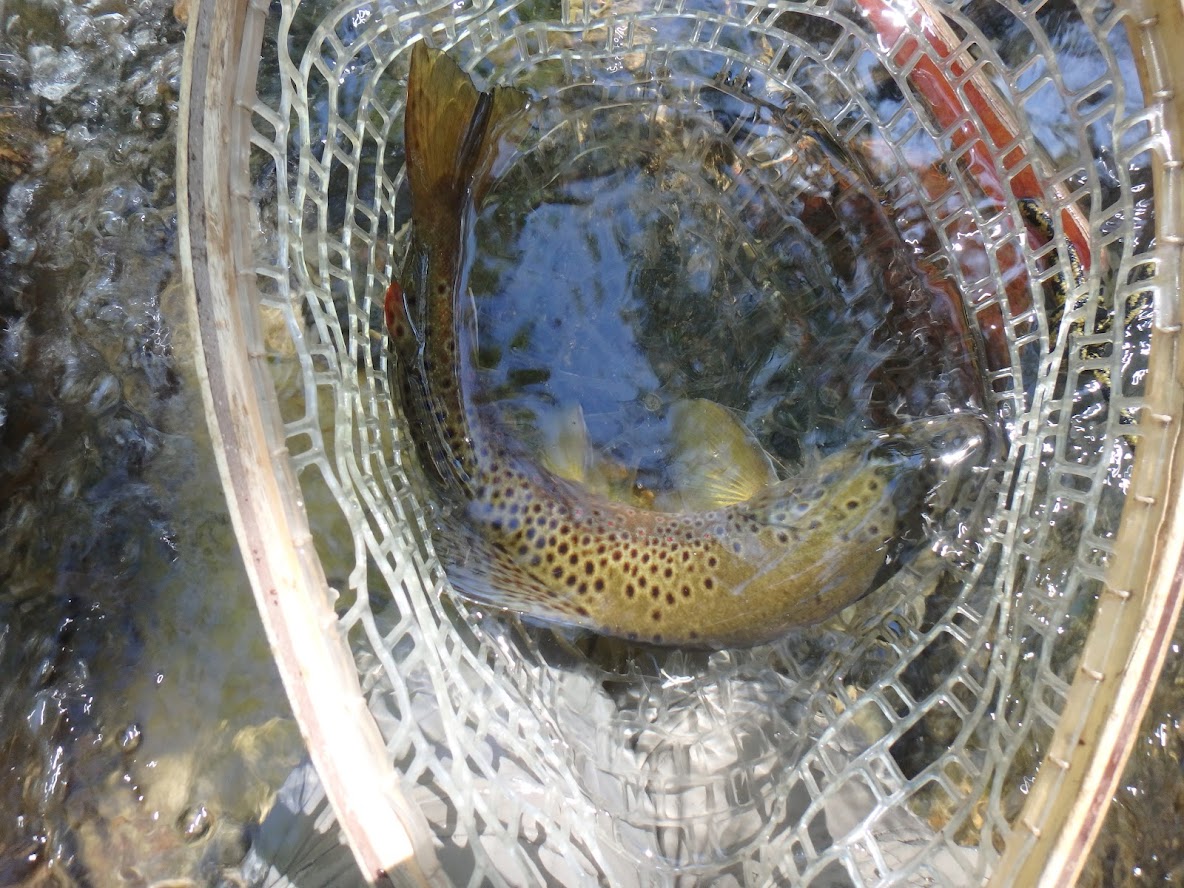 But what about the size of the other landed fish? I landed six fat browns in the thirteen to fifteen inch range in addition to the big boy, and these were also impressive fish in the small stream environment. But what about the plunge pool and large boulder area? I landed nine fish from this type of stream structure, before I quit at 3:30, and this included the beast of a brown trout and most of the other larger browns. I suspect that fish in that area were seeing a fly for the first time. I am not sure if the results were worth the risk and extreme effort, but the fly fishing was superb and one of my best backcountry small stream outings during my many years.