Location: Near Tunnel 5 and 6

In two hours of fishing on Monday on Clear Creek I landed seven trout. A return trip was in order, and temperatures were projected to spike at eighty degrees in Denver on Friday, October 20. This windfall of summer-like weather motivated me to make the short drive to the western end of Clear Creek Canyon. I arrived at the parking lot just west of Tunnel 5 by 10:45AM; however, the lot was full, so I exited and parked along the highway a short distance to the west.

After I assembled my Orvis Access four weight and climbed into my waders, I was on my way, and I followed the Peaks to Plains Trail around the oxbow until I reached the point where I exited on Monday. I had unfinished business, and I began my quest for trout by 11AM. On Monday I enjoyed success with a Jake’s gulp beetle, so I knotted one to my line on Friday and began to prospect the deep pockets that existed mainly along the left bank.

After thirty minutes of fruitless casting and wading I paused to eat my lunch on some sunny rocks, and I lamented my lack of action. It was already obvious that the catch rate would probably lag the pace of my previous visit to Clear Creek. Just prior to my lunch break, I waded across the creek at a wide relatively shallow riffle section, and while casting upstream to a moderate riffle, I spotted two decent fish. I interrupted my pursuit of trout to observe, and I noticed that the two fish were rubbing against each other and generally frolicking about at the tail of the shallow area. I surmised that I was viewing some amorous activity, and the brown trout spawn was in progress. Not wishing to interrupt their procreation, I returned to the bank below the path and consumed my modest lunch.

Shortly after I resumed fishing at 12:15, I plopped the beetle into some moderate riffles directly above my position, and I was surprised when a fish elevated and inspected my fly. Unfortunately the stream inhabitant chose not to eat and only inspected. Sensing that I would not have many opportunities to sight fish on this day, I decided to focus on the fish that revealed its position to my observant eyes. I swapped the beetle for a parachute black ant with a pink wing post. The first cast went unmolested, but the second pass floated directly over the place where the trout inspected the beetle, and this time the rainbow could not resist the black ant. I quickly raised the rod tip and connected with an eleven inch rainbow trout, and I snapped a photo in case it was my first and last fish on the day. 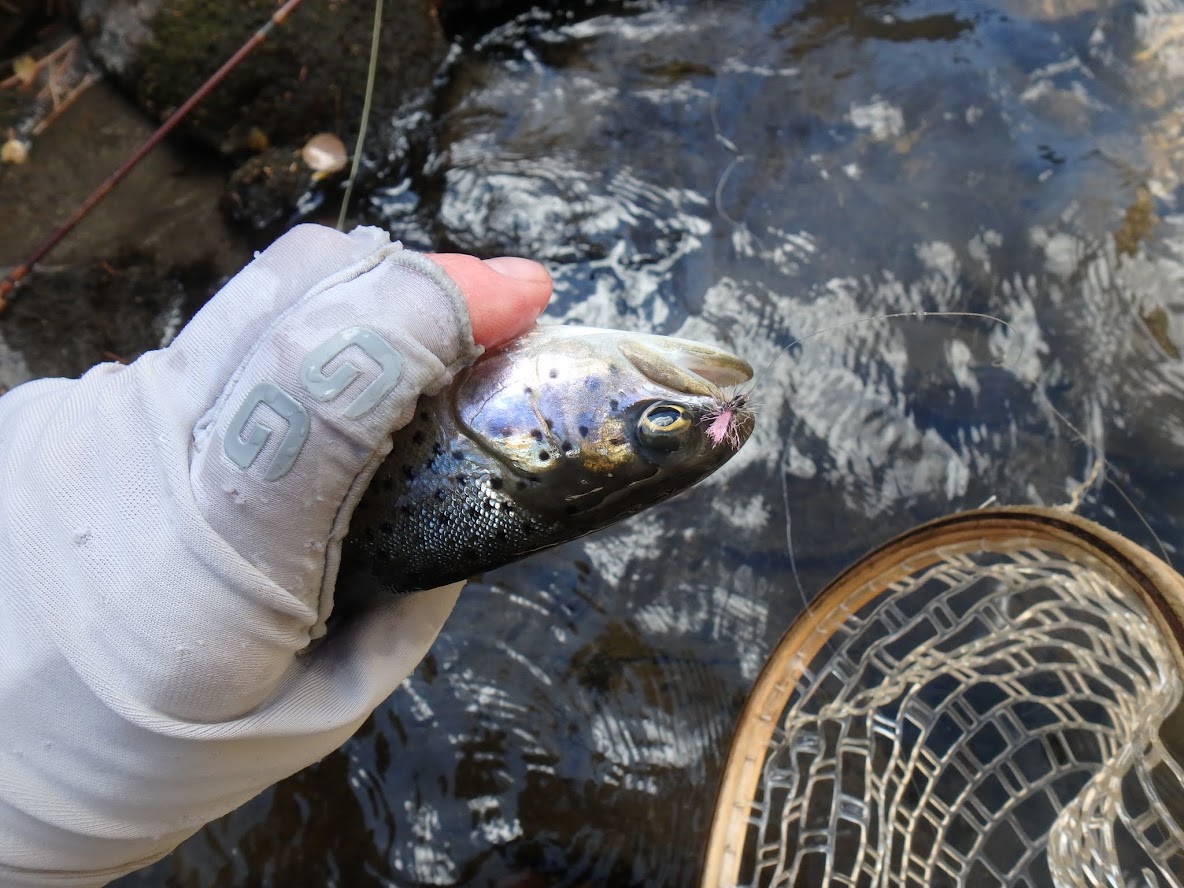 And There Is the Parachute Ant

I settled on the bait and switch routine as my preferred approach on Friday, and I cut off the ant and returned the beetle to the end of my tippet. I prospected with the larger foam attractor fly with the expectation of once again switching to the ant, if I observed another look or refusal. When I reached the bend I encountered some nice wide deep pockets, and I employed the across and down approach that yielded seven trout on Monday. I was very pleased, when I executed a reach cast to a pocket fifteen feet across from me, and just as the beetle was about to accelerate over the lip at the tail, another rainbow trout surface and slurped the foam terrestrial. 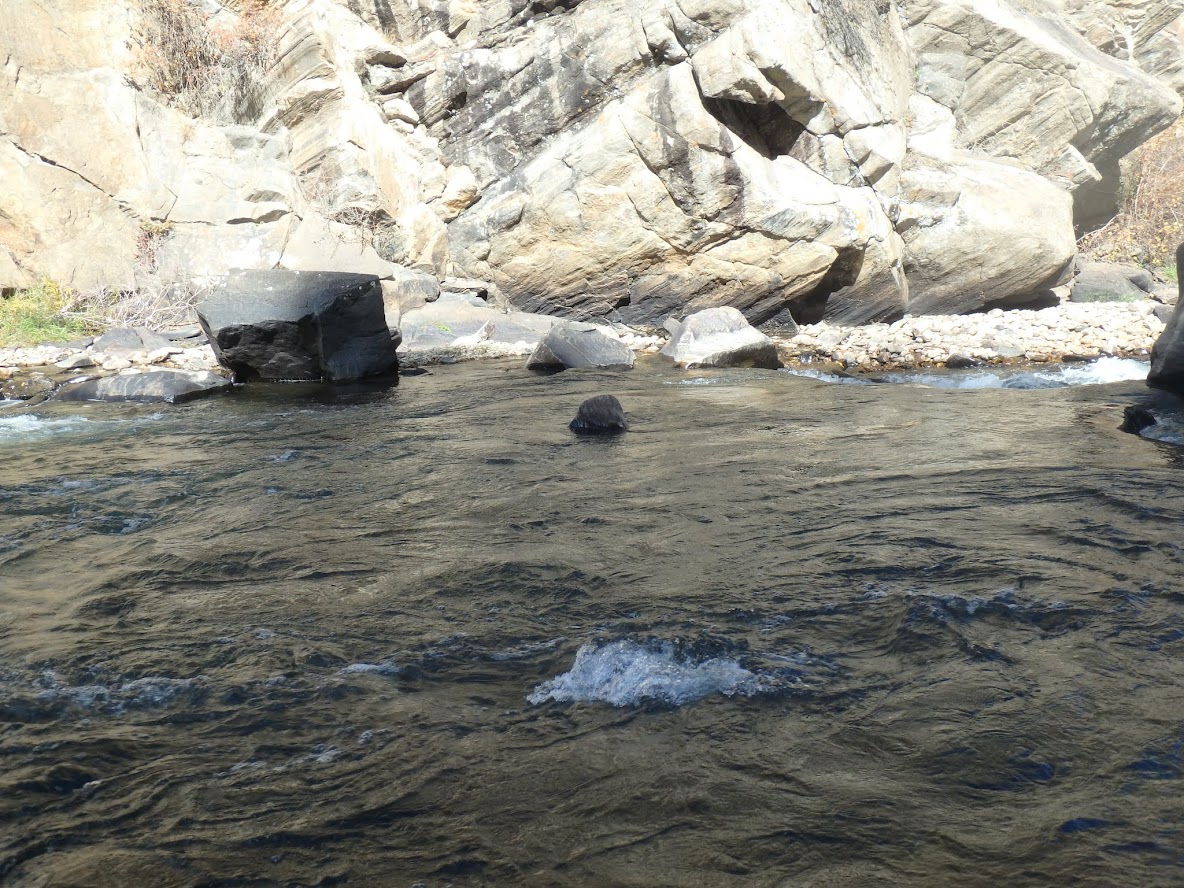 The Rainbow Dwelled in the Slick Along the Far Bank 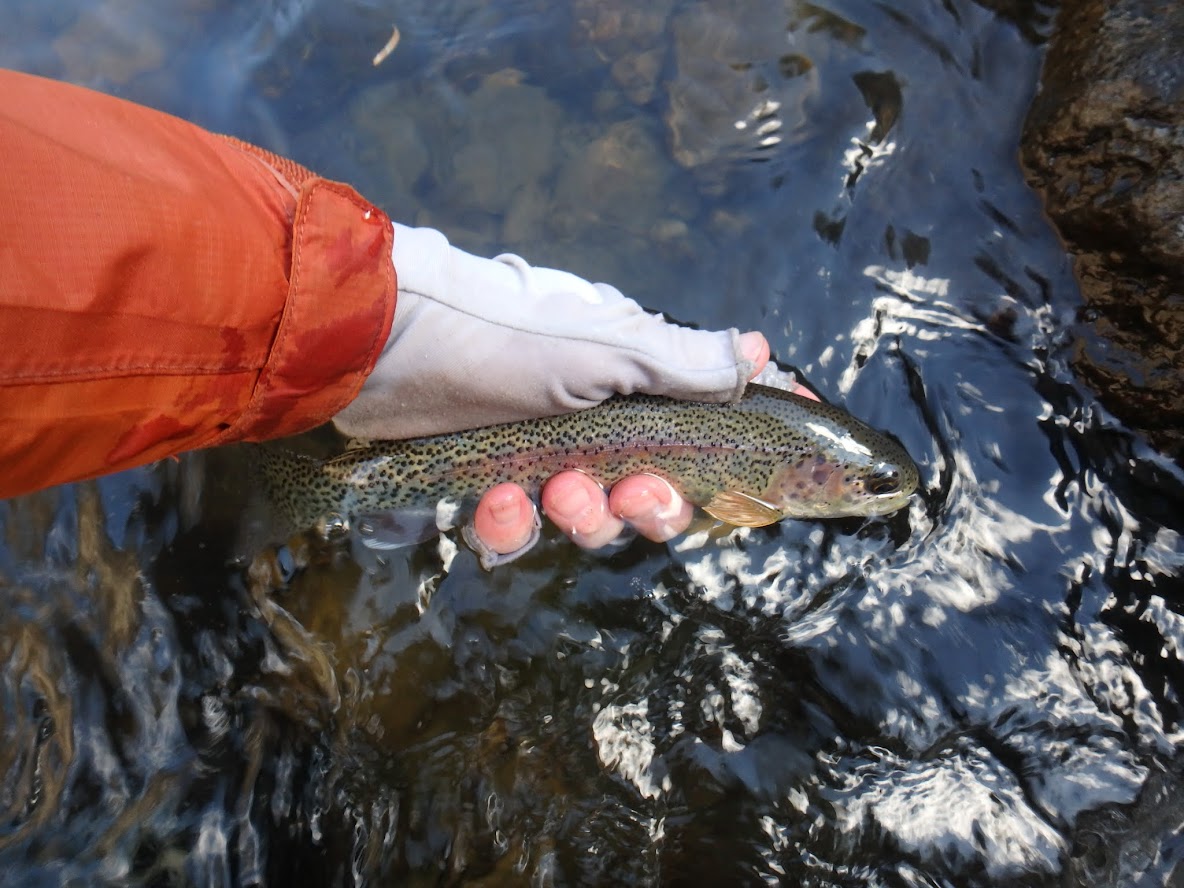 After I released the second rainbow, I continued my upstream progression, and I searched for additional locations suitable for the across and down drift technique. Several appeared, but I was unable to repeat the earlier success, and by 2:30 I was positioned just below the parking lot at the end of the Peak to Plains Trail. I climbed up the steep rocky embankment and tossed my gear in the Santa Fe and drove west beyond Tunnel 6. I chose this spot because I recalled landing a disproportionate number of rainbow trout there in 2016. It was clear to me that the brown trout spawn was in progress, and rainbow trout were more apt to be in a feeding mindset on this warm autumn day.

The move paid off to some degree, as I added three more small trout to the fish count in the last hour of fishing. One of the netted fish sipped the ant on an across and downstream drift, and the other two fell for a similar presentation of Jake’s gulp beetle. Surprisingly two of the victims near Tunnel 6 were brown trout, and one was another eleven inch rainbow trout. I bumped into two other anglers positioned next to prime deep holes, and I was between them and restricted in my movement for my last hour. For this reason I decided to quit at 3:30 rather than drive to yet another location on Clear Creek. 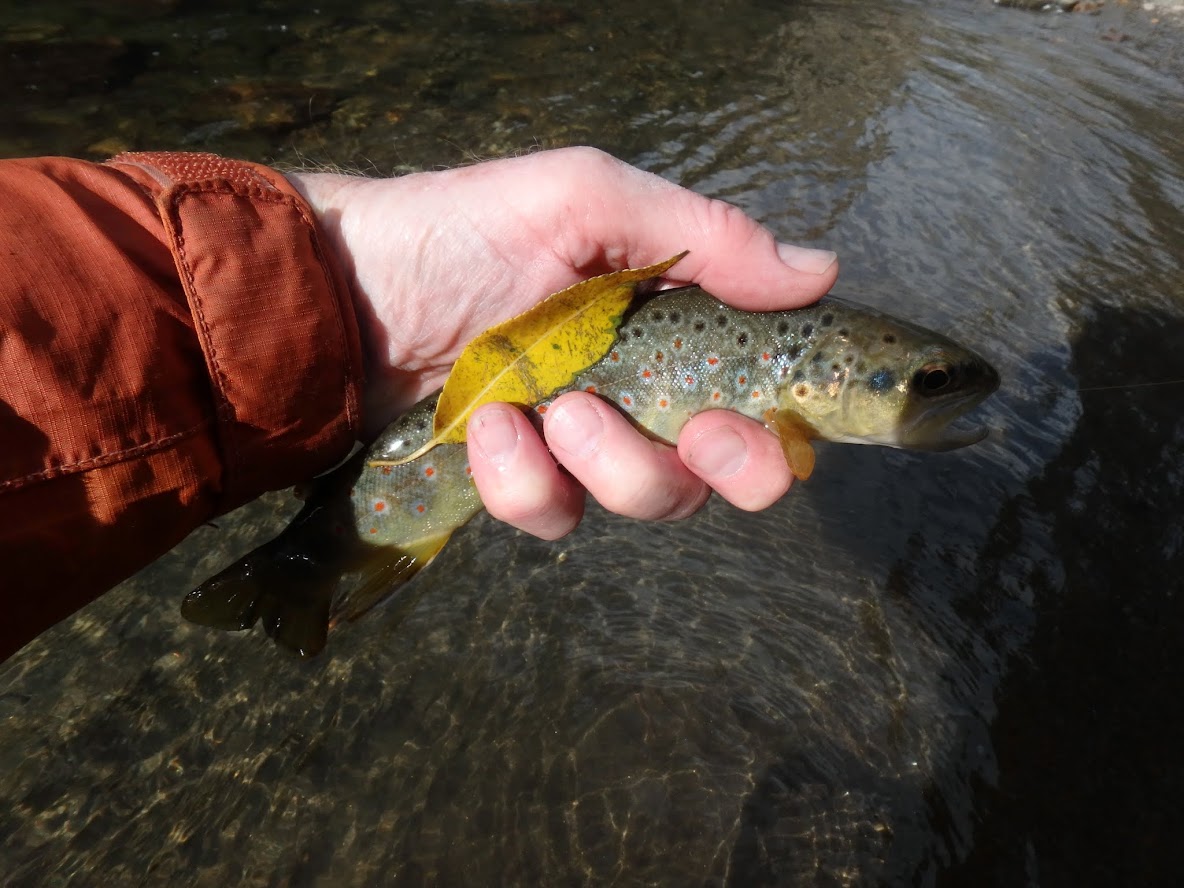 A Rare Brown Trout on October 20

The weather was glorious for October 20, and I managed to fool five trout. I executed the same across and down drifts that yielded success on Monday, and achieved similar success. Jake’s gulp beetle was the leading character in the fly fishing play, but the black parachute ant played a key supporting role. The trout population of Clear Creek is probably ninety percent brown trout, so landing five trout while the spawning ritual was in full swing was a significant accomplishment.