Regular readers of this blog (are there any?) may ask why I fished the Taylor River so much in 2012. The answer lies in the fact that it is a tailwater in this summer of low water flows and it offers an abundance of nice campgrounds. Jane and I wanted to camp again and the Taylor seemed like a nice option for camping, fishing, hiking and biking.

I wrapped up the financial package for the month of June on Thursday early afternoon and rushed from my desk to home so I could pack and be on the road by a reasonable time. I succeeded in my mission and departed at around 3:45. Jane planned to do some fun activities on Friday morning and then depart around 1PM and join me at the campground for Friday evening. I stopped at a King Soopers in Aspen Park to purchase a few items and then made another stop at the Subway in Buena Vista for dinner. I arrived at Lottis Creek at 7:45PM and immediately set up the tent before dark. I grabbed campsite 8 on the Union Park Loop, the same location that I enjoyed during my last visit. 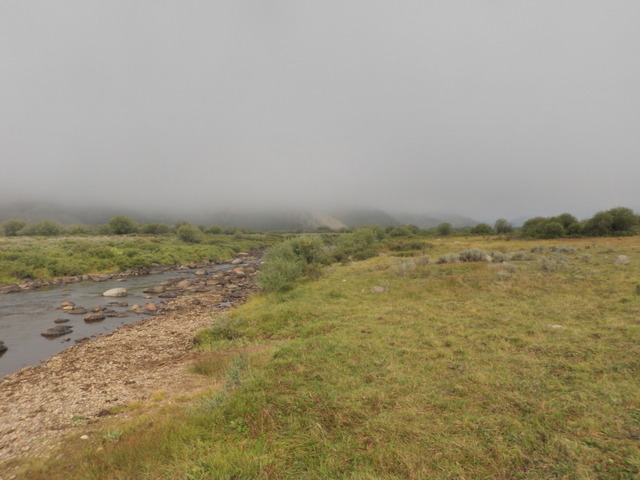 I was up at 7AM on Friday morning and had a quick breakfast and packed a lunch and hit the road by 9. It was quite foggy and misty as a result of a rainstorm that I drove through on my may down Cottonwood Pass. I decided to drive to the Upper Taylor and fish for a couple hours in the morning and then return to the lower Taylor near Lodgepole Campground for the afternoon. I found a pullout between the inlet to the reservoir and Dinner Station Campground and cut down to the river and began fishing by 9:30AM. The Upper Taylor was already crowded with RV’s and ATV’s in the many unofficial camping locations.

I began my fishing with a bushy caddis, but this didn’t produce any fish or looks so I exchanged it for a lime green trude which produced three small browns as I worked my way upstream. The trude was producing sporadically but I was experiencing quite a few refusals as well, and the fly was getting waterlogged and was difficult to see, so I clipped it off and tied on a Chernobyl ant and dropped a beadhead hares ear from the bend of the ant. I’d landed three on the lime green trude when I ran into a barbed wire fence which meant private water, so I exited the small stream and marched back to the car and motored a bit further north where I found a rough lane and parked. I angled through the sagebrush in a southwest direction until I intersected with the stream at a nice location with a small pool spanning the river.

By now the sun had burned off much of the fog and I shed my fleece by wrapping it around my waist under my waders. It was at this second location that I switched to the Chernobyl and beadhead hares ear, and I began prospecting with this combination. The beadhead hares ear began producing with more frequency and I landed another four on this combination with three grabbing the trailing nymph and one falling for the Chernobyl. However as the air and water warmed and the fog disappeared, I began observing many refusals to the Chernobyl with no attention being paid to the nymph. I decided to make another change and replaced the Chernobyl ant with a gray body parachute hopper and kept the BHHE in place. This proved to be a smart move, and I landed another five fish with two slamming the hopper and the others snaring the nymph. 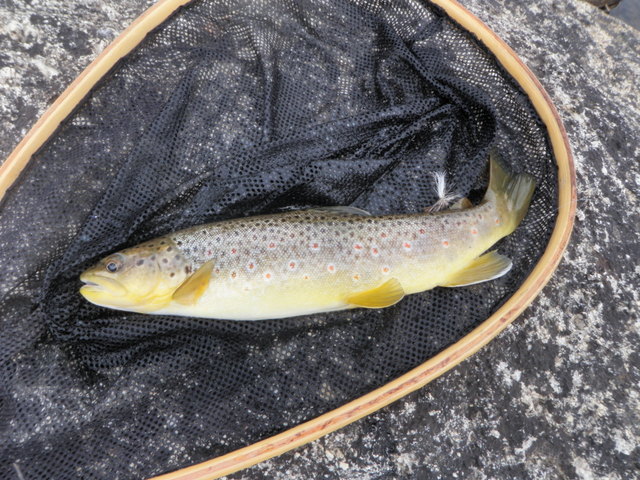 It was now near noon and I’d planned to quit at 11:30, and I was directly opposite the Santa Fe so I reeled up my line and strode back to the car. I drove the twelve miles or so around Taylor Reservoir and past the hog trough and eventually came to the pullout along the Taylor where I’d ended my fishing on the previous trip. I pulled out my lunch bag and ate on a large rock by the river and didn’t observe too much happening from an insect perspective.

After lunch I waded across the river at the wide riffle stretch below a large rectangular rock in the middle of the river. I reached the opposite side of the river across from my car and began working the pockets and runs along the bank with the hopper/dropper combination. Initially I covered a fair amount of water with no action, but within a half hour the fish began reacting to the hares ear nymph. It remained cool with large gray clouds passing overhead and blocking the sun, and I spotted a very sparse emergence of PMD’s. Since I was having success with the hares ear, I did not attempt to change to a beadhead pheasant tail or something closer to the PMD nymph. 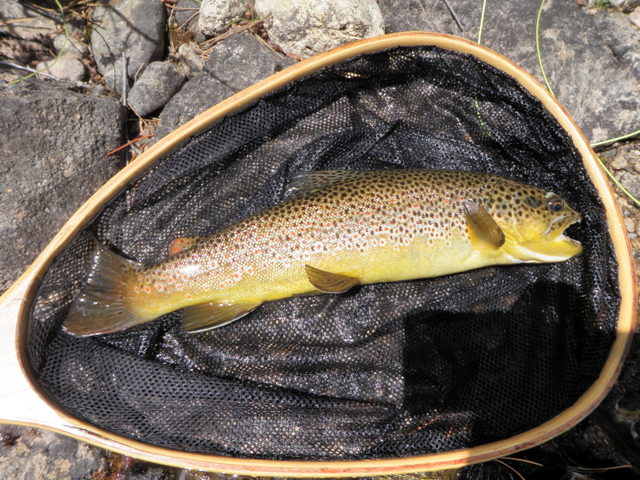 This Guy Is a Good 13 Inches

Between 1 and 3 PM I had a blast. I was simply popping casts into all the likely runs and pockets on the north side of the river and more times than not extracted at least one fish from each likely location. By 2PM the fish count was climbing and more fish began to hammer the hopper. Also, I landed two nice fat fish close to fifteen inches that inhaled the nymph as I drifted the dry/dropper combination along heavy riffle current seams that bordered smoother deeper slots. These fish put up nice battles in the faster current before I scooped them into my net. 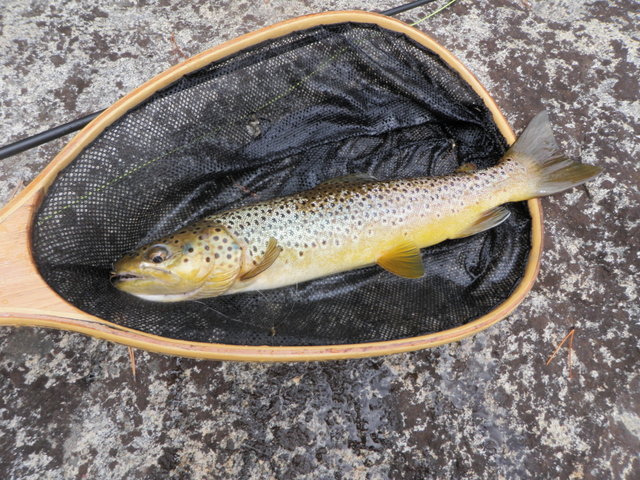 By 3PM some dark clouds moved up from the south and I heard thunder rumbling in the distance. The storm appeared to be heading toward the campground, and I’d left a folding chair out in the open, so I decided to wade back across the river as I was conveniently at another relatively wide riffle section. I hopped in the car and drove the three miles to the campground and put the chair back in the Santa Fe where it would remain dry, and then quickly returned to a pullout where I’d exited the river. I waded back to the far side and resumed my prospecting. As I recall I picked up two more browns in the 9-10 inch range, and then the river went dead so that I simply exercised my arm until quitting at 4PM.