I vowed to return to the Taylor River and this promise was kept. Would I encounter green drakes and PMD’s hatching like I experienced briefly in my two hour teaser session on July  20? Read on.

I worked at a furious pace Mon. – Wed. so I could take off on Wednesday and return to the Taylor River and snag a campsite at Lottis Creek as I completed the May package and left work at 2:30 and hustled home to finish packing the car. After stopping at King Soopers to purchase ice and two propane tanks on my way out of Stapleton,I hit the road by 3:15. I pulled into the Lottis Creek Campground at around 7:30 after stopping in Buena Vista for a dinner of Subway sandwich and had the REI two person tent assembled and up just as darkness descended. I elected to try the new loop at Lottis Creek, Union Park, and found a nice site with sparse trees on the outside of the loop.

On Thursday morning I ate my breakfast and took a brief walk while waiting for the sun to rise higher in the sky and warm things up a bit. It was probably 40 degrees and I wore my ski hat and down vest. Once the sun peaked over the hill east of the campground it warmed quickly and I shed layers just as rapidly. For the first day I decided to fish the stretch below Lottis Creek as I had done on the previous Friday, but I elected to start further downstream. When I reached the Cold Spring Campground, I noticed a wooden stairs that went up and over the fence so I concluded this was public water and chose this spot to begin my fishing.

I was on the river rigged and ready to fish by 9:30 and walked up along the bank away from the well worn path. There was a stretch of very fast water in a narrow chute so I skipped around this to the first point where the river spread out a bit and created some nice pools  and pockets along the right bank. Since it was fairly early I elected a tan Charlie Boy hopper and dangled a beadhead hares ear off the bend. I covered a reasonable amount of water with no success before I decided to switch to nymphs in this stretch of fairly fast turbulent water with periodic short pockets. It screamed out as stonefly water so I tied on an Arkansas rubberlegs and below that a beadhead prince nymph thinking this might imitate a green drake nymph. Nothing. I covered some very juicy runs with no results and then clipped off the rubberlegs and went with two flies plus a split shot and strike indicator. 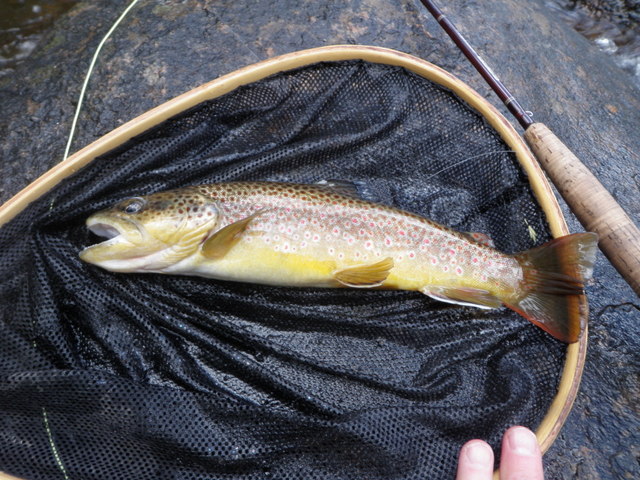 I tried a beadhead bright green caddis, beadhead hares ear, and beadhead pheasant tail in the two fly nymph set up to no avail. I’d now fished for an hour or so with nothing to show for my efforts so I decided to revert to the dry fly tactic that worked for me the previous Friday. I clipped off the nymphs, removed the split shot and strike indicator and tied on one of the bushy green drakes I’d purchased on the Conejos River. Wham! A nice brown rose and sucked in the green drake in a nice run along the bank above me. It was a nice chunky 13 inch fish so I photographed it and moved on. Either the fish were sluggish, or the green drakes had passed, or my fly wasn’t a perfect imitation because I covered quite a bit of additional water with no takers, and I was about to change flies again when a nice chunky 13 inch rainbow rose and slurped in the green drake at the deep tail of a nice run. Again I photographed this fish and moved on. 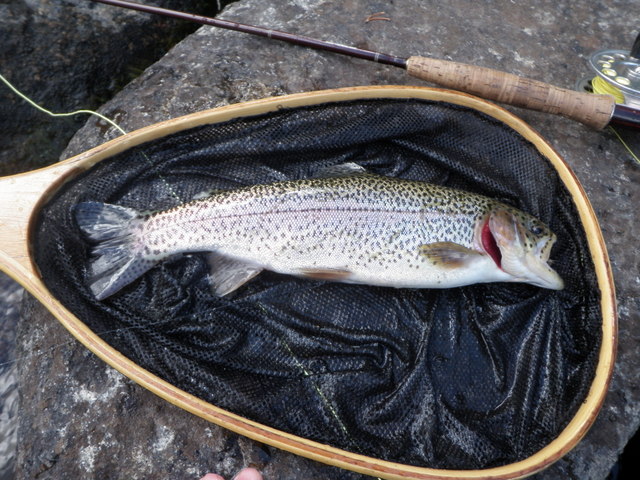 Nice Rainbow Is No. 2

As I worked upstream the bushy green drake became waterlogged and I was spending a lot of time pressing it against my shirt and dipping it in the dry shake to enable decent flotation. I decided to try one of my comparaduns to see if they would float better. They did, and I continued working my way upstream catching seven more before breaking for lunch at 1PM. 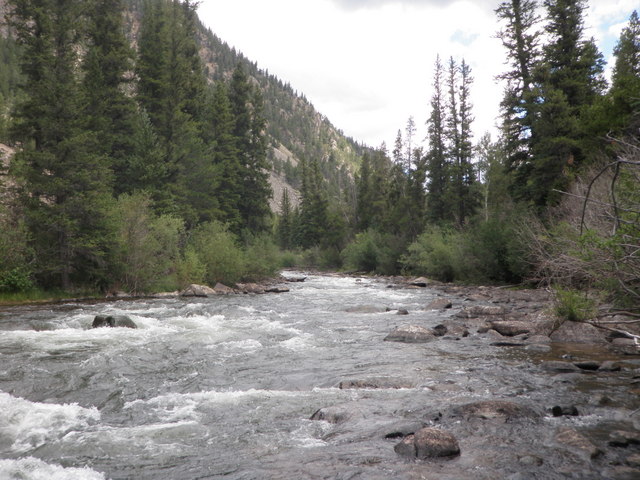 After lunch I landed one more brown on the green drake, and it was starting to require frequent drying as well, so I decided to experiment with something different. I tied on a Chernobyl ant with a beadhead hares ear and then added a beadhead pheasant tail as well. I was covering my bases in case a pale morning dun hatch evolved. A sparse emergence did in fact occur as I spotted several duns fluttering skyward and a rare random rise. I stuck with the dry/dropper strategy believing that the two nymphs would imitate the PMD nymphal stage, but managed to land one small brown on the pheasant tail. I did, however, land a nice colorful rainbow that was duped by the Chernobyl. 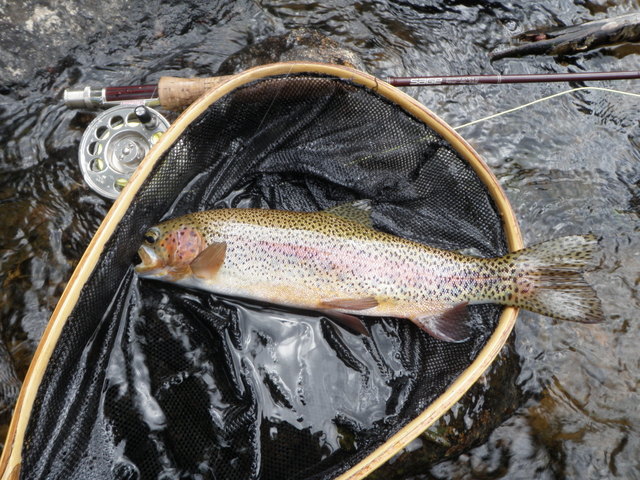 When I no longer noticed PMD’s and hadn’t caught a fish for quite a period of time, I decided to return to the green drake comparadun. I was near the top of the stretch where a wide pullout is present along the paved road and from this location to the private water I landed two more browns on the green drake. I retreated from the no trespassing sign to the wide pullout just as another fisherman who had been working the opposite bank emerged. I asked how he did, and he informed me that he did pretty well with stimulators and caddis. He showed me his caddis and they were quite large with a dark body and light dun palmered hackle.

I decided to call it quits and return to the campground for an early dinner that would hopefully allow some time for evening fishing. After dinner and cleaning up the dishes, I jumped back in the car and drove to the hog trough below the Taylor Reservoir dam. The stretch is only .2 – .3 mile long and constantly crowded with fishermen trying to land one the football size trout that reside there. The trout pig out on mysis shrimp that pass through the dam and reach outlandish proportions. Unfortunately they are extremely educated and this is a very difficult place to catch fish.

I parked in the second unoccupied pullout on the north side of the road and much to my amazement the large wide and long pool near the western border of the public water was open. I decided to tie on a caddis initially and worked my way up along the bank at the tail of the massive pool. I was spraying casts from the bank to the middle of the river which covered a distance of approximately 50 – 60 feet. I wasn’t getting any action, so I decided to tie on one of my royal stimulators that seem to work well in the evening hours. It has a white calf body wing, and that makes it very visible in the evening light. Some blotchy gray rain clouds were blocking the setting sun and making it darker than normal for 7:30.

Since the top of the pool was open I moved pretty quickly to the prime area and made a few casts to the nervous water at the top of the run. While doing this I spotted a rise in an eddy behind a protruding rock. I worked my fly in this area and held the rod tip very high to keep my line off the water and spotted a swirl or refusal to my fly. I continued trying for this fish, but as is usually the case, it didn’t respond after the initial refusal.

Again I noticed a rise further down the pool five feet inside the center current seam toward the bank I was positioned on. I was above this rise, so I began making casts across from me, executing a big mend to put the fly line above the fly, and then performing stack mends to feed out line and let the fly drift downstream toward the area of the rise. I did this perhaps five or six times when I noticed a sip on my fly and set the hook. A rainbow trout immediately jumped from the water and demonstrated a strong fighting spirit before I could contain it and bring the battling rainbow to my net. It was a chunky thirteen inch shiny fish, and I photographed and released the fish. 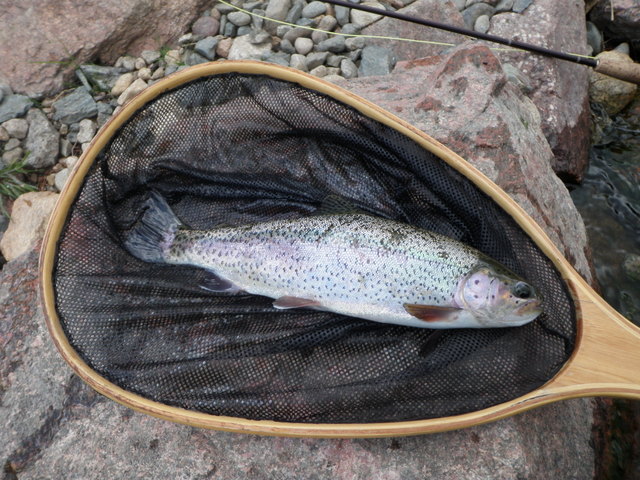 The dark clouds were now overhead and it began to rain lightly so I pulled my raincoat from my backpack and pulled it on under my wader straps. I continued fishing and alternated between the middle section of the pool and the nice pockets and run at the top of the pool. The remaining light was getting quite scarce, and now I saw a cloud of spinners in front of me bobbing up and down. I swiped my net through the cloud of insects and spotted a captured spinner, but before I could examine it closely, it fluttered away. Once again I made a swipe and noticed a spinner clinging to the fine webbing in my net. This mayfly had less energy, and I was able to pinch its wings and inspect the dark rust colored body.

I pulled my fly boxes from my front pack and found a cornuta spinner of a similar size, but it had a dark olive body. Lacking any dark rusty spinners, I tied the cornuta spinner on to the size 14 royal stimulator as a second fly. I figured the leading stimulator with the white wing would allow me to locate the difficult to follow spinner, and this theory largely held true. I later discovered that I had a fly box in my backpack that contained four dark rusty spinners.

By 8:45 it was virtually impossible to see anything and the small amount of rising fish had now subsided so I decided to pack it up for the night. I was pleased to have landed 16 trout on the Taylor River including three or four in the thirteen inch range, and twelve using large green drake dry flies. What would tomorrow yield?