Location: A mile or two downstream from Lottis Creek Campground

Why does it seem that the fishing is best when one has a limited window of time to fish? This was my situation on Friday, July 20, 2012. Amy and Dan were members of the Runny Noses Revival, a running relay team that started in Canon City on Friday morning at 8:30AM. The twelve team members would run 36 legs, three per person, and cover 195 rugged miles until ending in Crested Butte, CO.

The team needed to provide three volunteers so Jane and I provided our services and selected a 7.5 hour stint at exchange 33 near the end of the course. Since we needed to be at our station at 7:30AM on Saturday we decided to drive across Cottonwood Pass on Friday and secure a camp site near the Taylor River. We did a lot of packing on Thursday before hosting the team carbo loading party at our house, so we were able to depart the house by 7:30AM and arrived at Lottis Creek by approximately 11:15. We both wanted to drive back east over the pass and meet up with the Runny Noses, but I convinced Jane to allow me to fish from 11:30 until 1:30. I helped Jane unload much of the camping gear, and then she drove me down the road and dropped me off at a spot near the river.

I’d read on the Willowfly Angler web site that green drakes and pale morning duns were hatching between 10AM and 2PM, so I was anxious to see if this was true. I’d called the fly shop to find out what stretch of the river was most likely to produce hatching mayflies, and the man at the shop suggested the public water between Lodgepole and the dam.

I was right in the middle of the 10AM – 2PM time window as I strung my line through the rod guides and then hiked through the woods to the river. I emerged next to a beautiful deep pool that would actually be the nicest water I’d fish on Friday. As I pushed the loop of my fly line through the rod guides, I kept an eye on the water, and sure enough noticed one or two green drakes slowly fluttering up from the river. Surely the fish would be tuned into these juicy size 12 morsels. I elected to tie on one of the bushy green drakes I’d purchased at the Conejos Angler, but unfortunately the fish didn’t agree with my choice and rudely refused my offering. Two fish darted to the surface but turned away at the last instant.

Meanwhile I also observed some smaller mayflies, probably PMD’s, as I followed my rejected green drake. Could the fish be ignoring the big guys and focusing more on the abundant PMD’s? The only way to find out was to clip off the green drake and tie on a money fly, a light gray comparadun. The comparadun looked very life like to me, but the fish didn’t even refuse this fly. I pulled my fly up and observed the water, and noticed more green drakes and PMD’s emerging. I decided to go back to the green drake comparadun that I tied myself for the Frying Pan River. I plucked the smallest one I had in my patch, probably a size 12 2XL, and knotted it to my leader.

At last I had a winner when at the very tail of the deep run a fine twelve inch rainbow rose and confidently sipped in my green drake. I paused to wade to the bank and photographed the rainbow before releasing. I pressed the green drake against my shirt sleeve to absorb the moisture and then dipped it in the dry shake cannister. I shot some casts higher in the run and picked up a smaller brown. 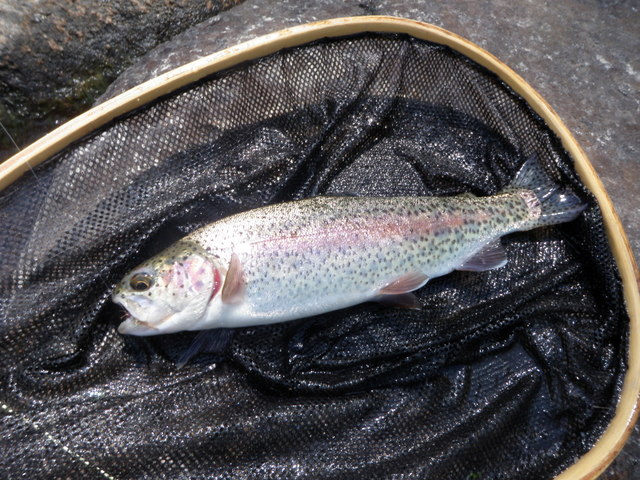 Over the next hour and a half I covered the pockets and runs along the right bank with the green drake comparadun and landed seven more fish, all browns. I also experienced numerous refusals, so my fly wasn’t a perfect imitation, but nine fish in two hours was certainly productive fishing. Of the nice fish landed three including the initial rainbow were in the foot long range with the others being 8-11 inches long. It was fun to flick the large green drake upstream and watch fish rush to snatch it from the surface. Unfortunately I needed to call it quits at 1:30PM and there were still mayflies emerging and fish rising.

I pledged to return at the end of the next week, and climbed up the bank and walked to the pullout where I’d agreed to meet Jane. At least the limited time window forced me to focus on my fishing and be as efficient as possible. If everything came easily, fly fishing wouldn’t be the challenge that keeps me coming back.