What now? I had a few hours available to salvage my fishing trip of Friday, August 4. I surrendered to the Colorado River near Parshall, and I considered options for the remainder of the day. The upper Williams Fork above the reservoir was relatively close, although that choice required a longer return drive. I fished Willow Creek along CO 125 briefly while camping at Denver Creek quite a few years ago, and I recalled landing some brook trout, but my fishing skills were weaker then than now. Two possibilities along the return drive were St. Louis Creek west of Fraser, CO and the North Fork of Clear Creek west of Empire, CO. St. Louis Creek appealed to me because I never fished there, and it was more distant from a main road than Willow Creek or the North Fork of Clear Creek. More distance equals less pressured in my book.

I entered Fraser Experimental Forest in my maps app, and my iPhone directed me to the headquarters located across from St. Louis Creek. The directions were accurate, and I backed into a narrow space between two trees, and I quickly prepared to optimize my remaining time on August 4. I remained in my waders, but I broke down my Sage five weight, and now I chose my Loomis two piece five weight, since it was a shorter rod and better suited to the narrow creek surrounded by trees and bushes. These actions allowed me to wade into the water by 2:30. 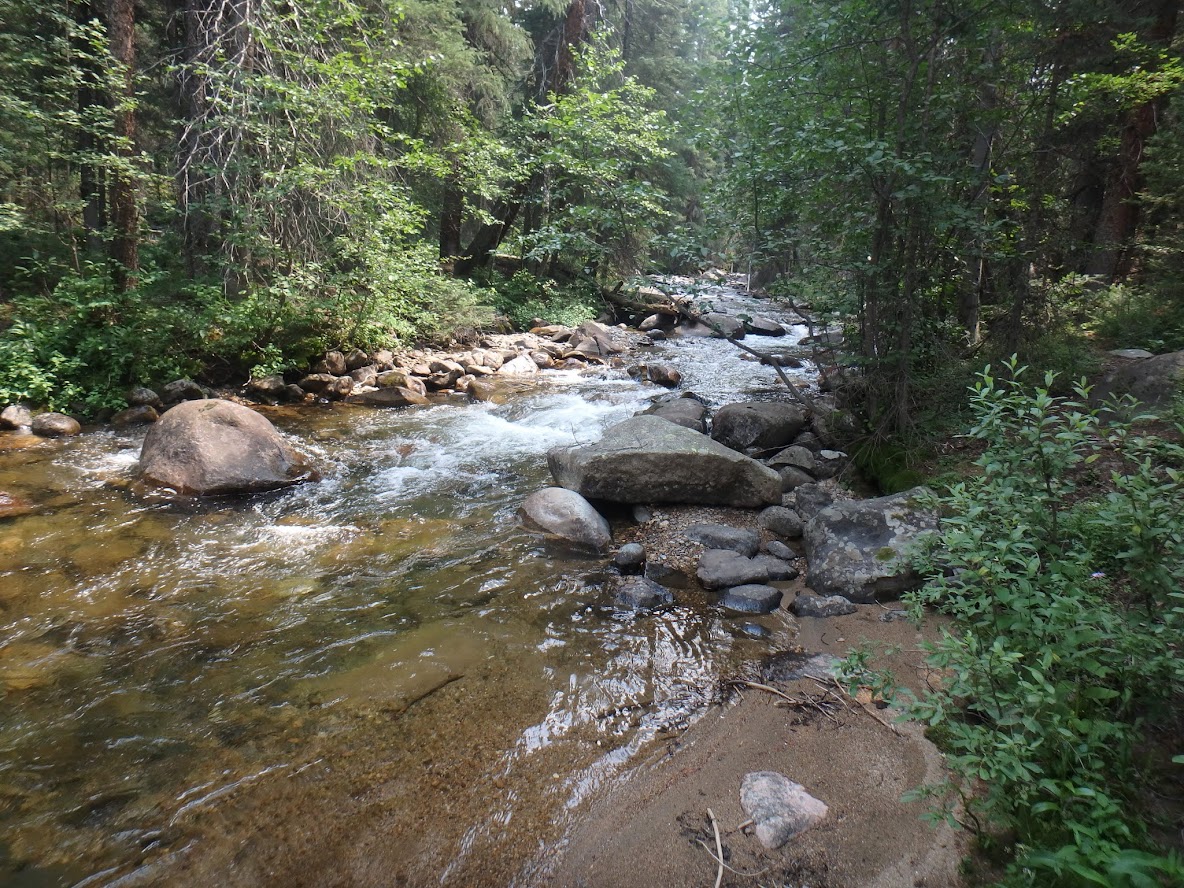 The sky was now cloudy, and consequently the air temperature dropped, although I remained comfortable in my long sleeved Columbia fishing shirt. The flow was strong although not excessively high, but excellent clarity prompted me to begin my day with a medium olive body size 12 stimulator. This fly was light and fluttered down on the surface without creating much disturbance, yet it was buoyant and easy to see. I began prospecting all the likely refuges for trout, and immediately encountered two long distance releases and a couple refusals. I persisted, however, and after ten minutes I landed a tiny four inch brook trout. This scenario unfolded for twenty minutes, and I eventually landed a couple char that were barely over the six inch mark required to increment the fish counter. Every countable fish was matched by twice as many momentary hook ups or fish too small to count. 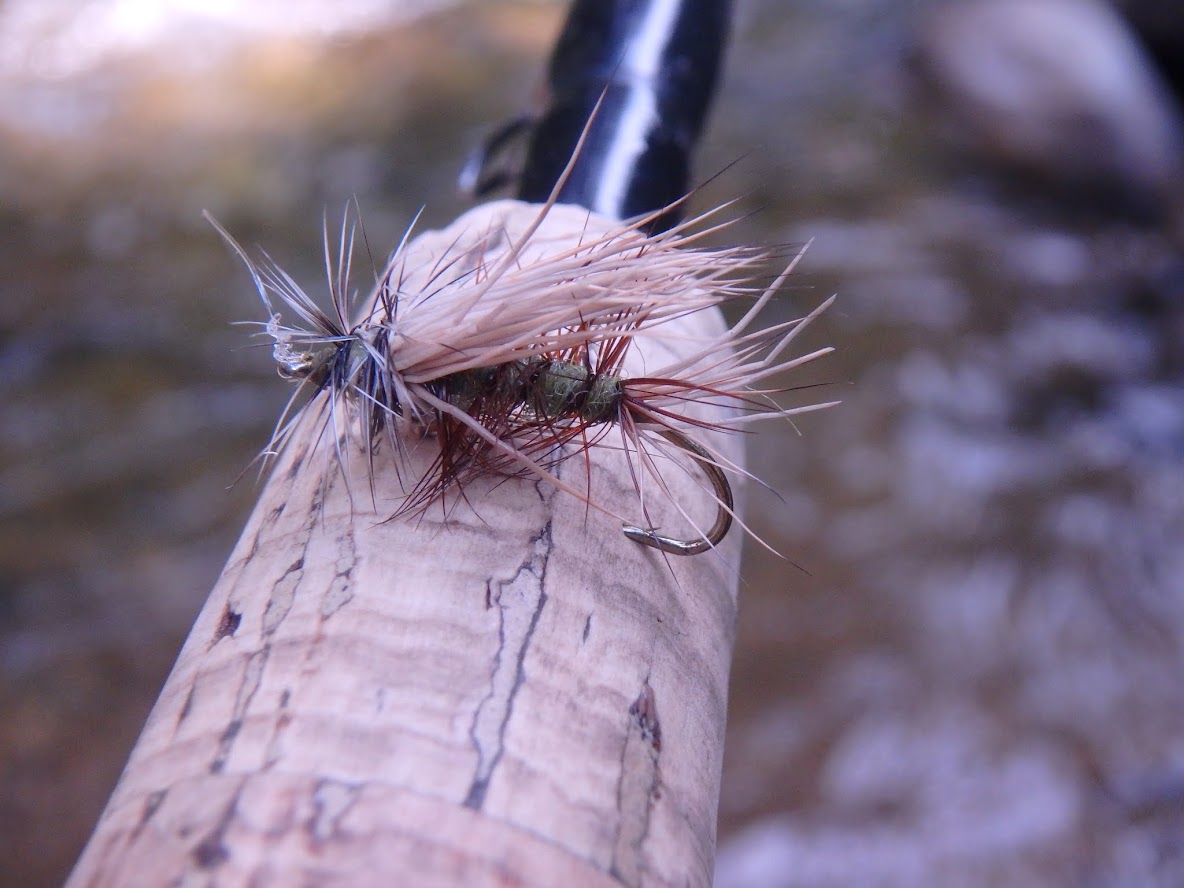 Began with an Olive Stimulator 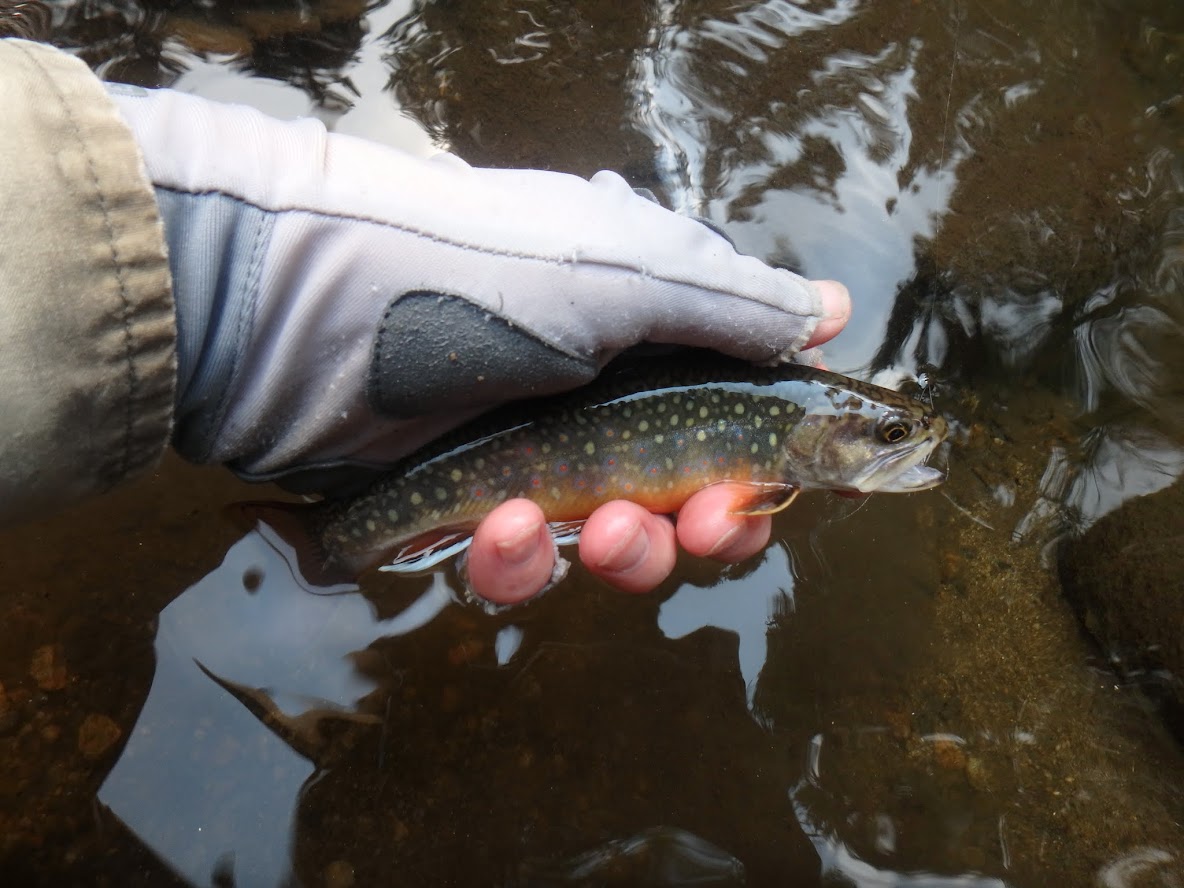 After another series of refusals I decided to downsize, and I tied a size 16 light gray deer hair caddis to my line. This proved to be a solid move, and I landed more fish, although the size of the brookies remained modest. The caddis was quite popular with the fish, however, and the fish tally climbed to seven. I hoped that the larger deeper pools would yield bigger fish, but fantasy did not become reality. By four o’clock some light rain descended, but not enough to get out my raincoat, and I pondered my next move. I was very curious to experiment with a dry/dropper in this small creek, so that is what I did. For the top fly I knotted a Jake’s gulp beetle to my line, and as a single dropper I attached a beadhead pheasant tail. 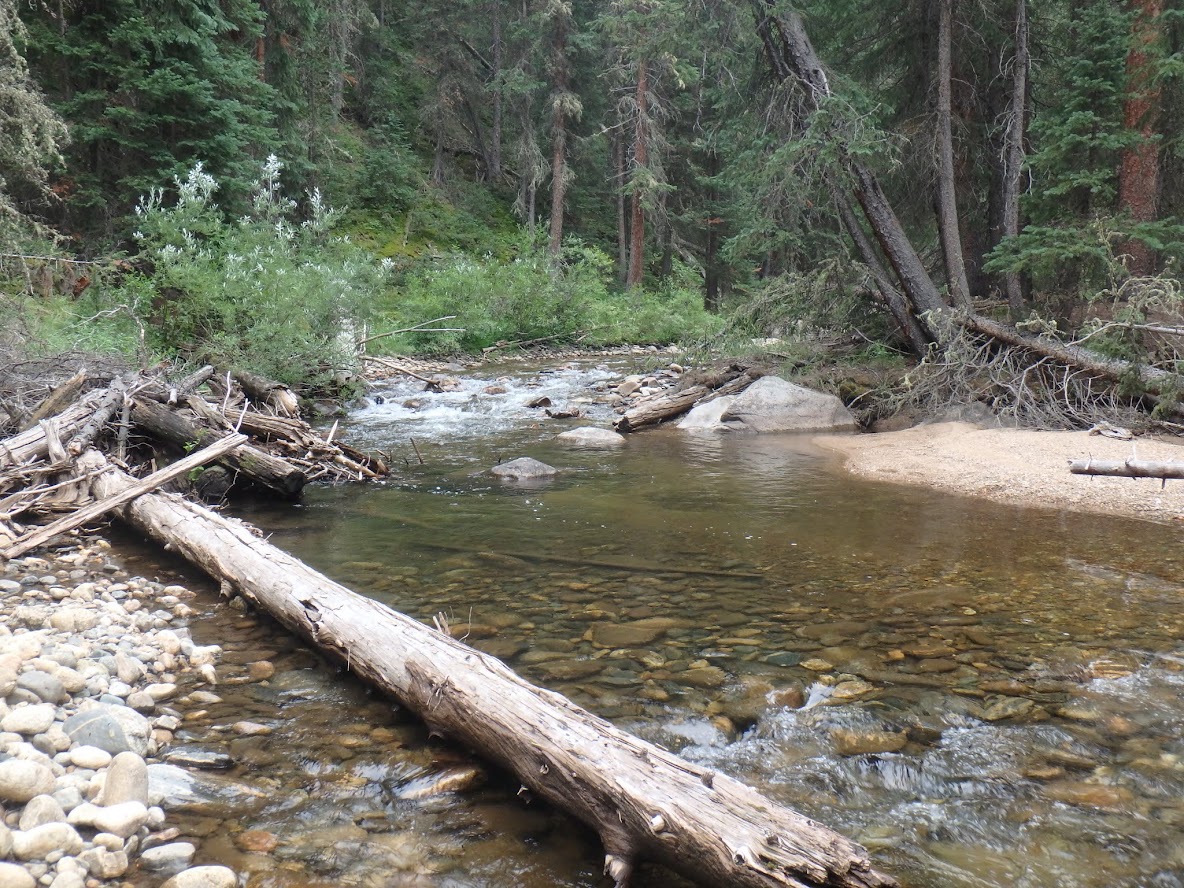 Best Pool on the Creek

The experiment was a success, and I landed eight more brook trout to push the count to fifteen before I retired at 5PM. The last hour was a blast, as I splatted the beetle and pheasant tail in all likely trout holding nooks of St. Louis Creek. Three aggressive brook trout attacked the beetle, and the rest snatched the pheasant tail from the drift. The size of the fish actually improved a tad, as I landed an eight inch battler and a couple seven inch jewels. And they were indeed gems, as the colors sparkled in the sun, and they displayed bright orange blotches along their underside. 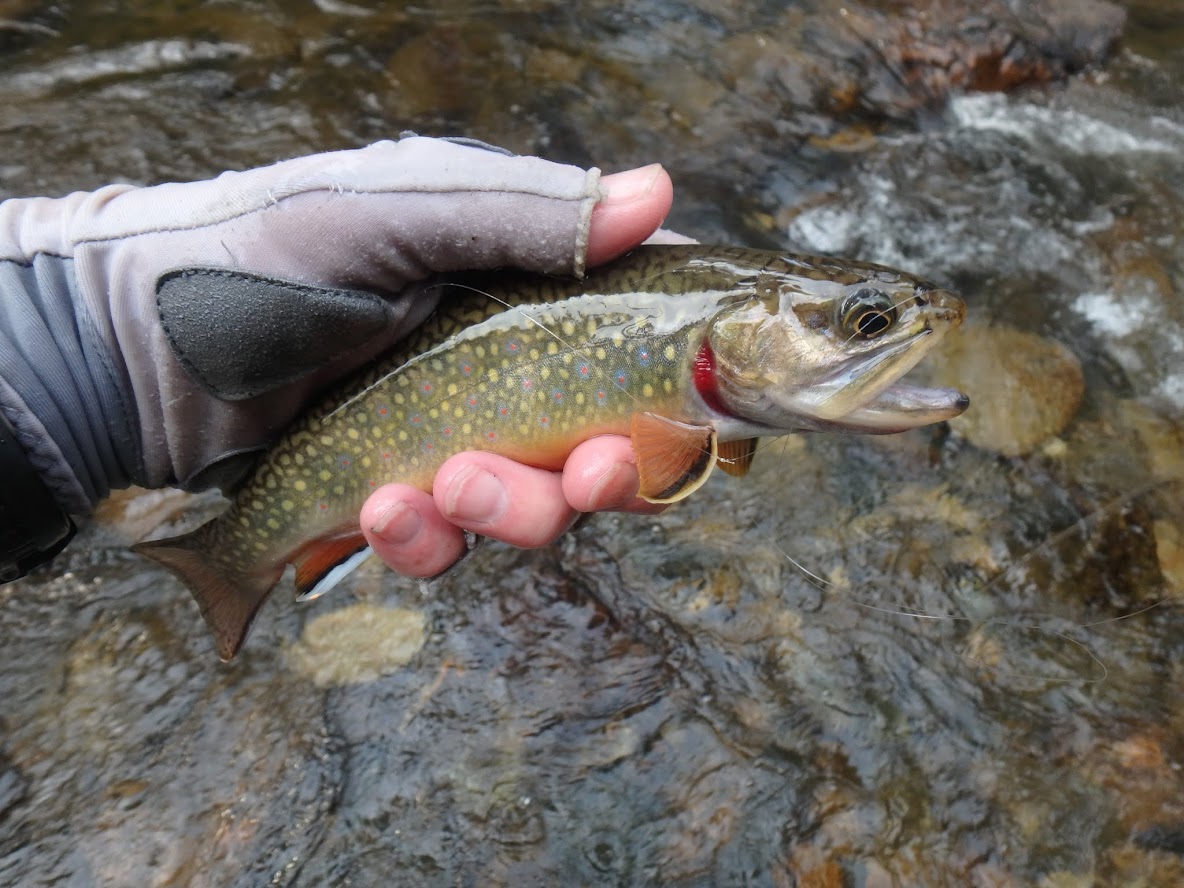 2.5 hours on St. Louis Creek was just what the doctor ordered after a tough outing on the much larger Colorado River. Each cast offered the chance of a pretty surprise. My greatest difficulty was staging the brookies for photos without the aid of a net, as the holes in the my net were too large for the tiny fish.