I continued my pursuit of high elevation trout on Friday with a visit to St. Louis Creek. My last visit to this small headwater stream was on 08/04/2017, when I yearned for some action on my return from a difficult outing on the Colorado River. I was aware that the fish population was comprised mostly of small brook trout, but I was in the mood for a day of exploring and prospecting for small colorful jewels. 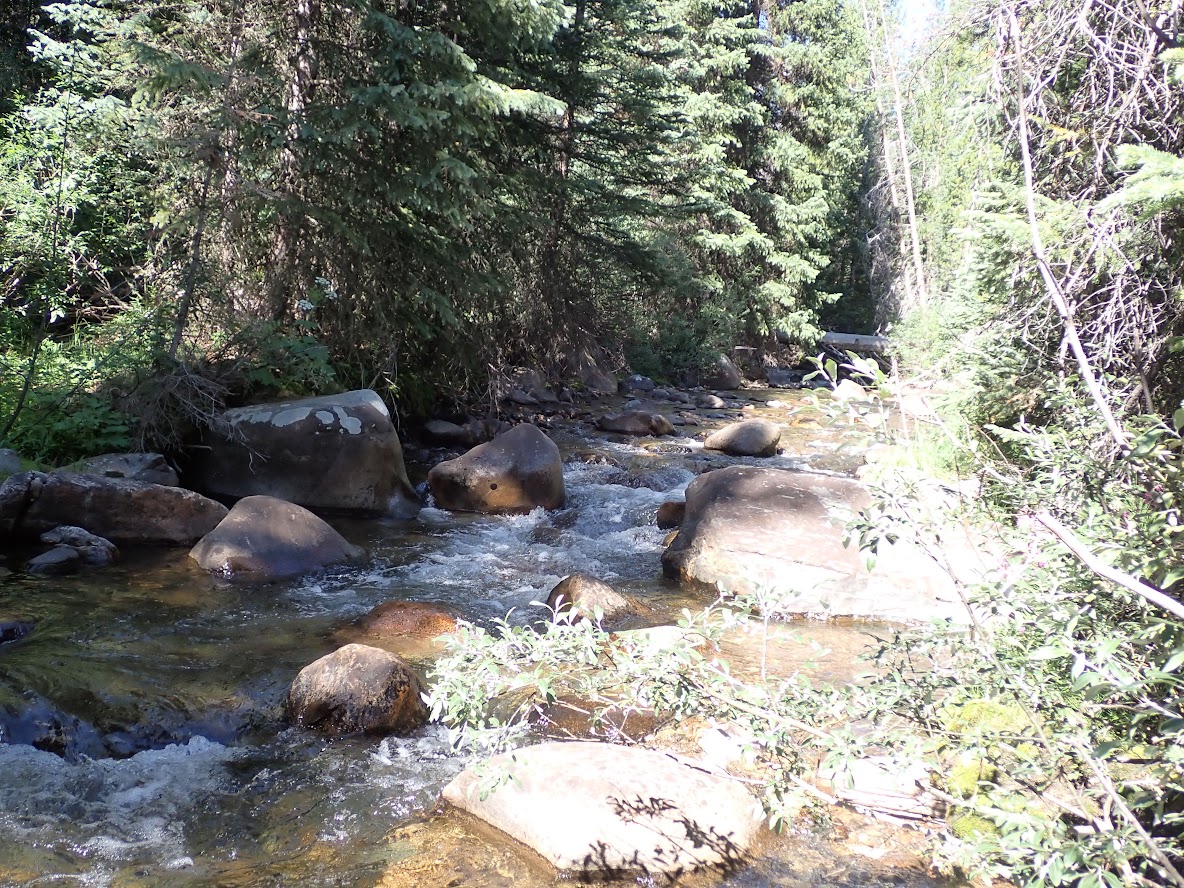 I arrived at a wide shoulder along a dirt road by 9:30AM, and I quickly rigged my Orvis Access four weight in anticipation of tight quarters and small trout. The air temperature hovered around sixty degrees, and I considered wet wading but eventually settled on wearing my waders in the high elevation shaded stream. The decision proved satisfactory, as I was comfortable for my entire five hours on the creek. The air temperature may have spiked to seventy degrees during full sun periods in the afternoon. The stream level seemed a bit low, but sufficient numbers of deep pockets and pools remained and offered hours of entertainment. Longer than usual casts and cautious approaches were a necessity in the clear conditions. 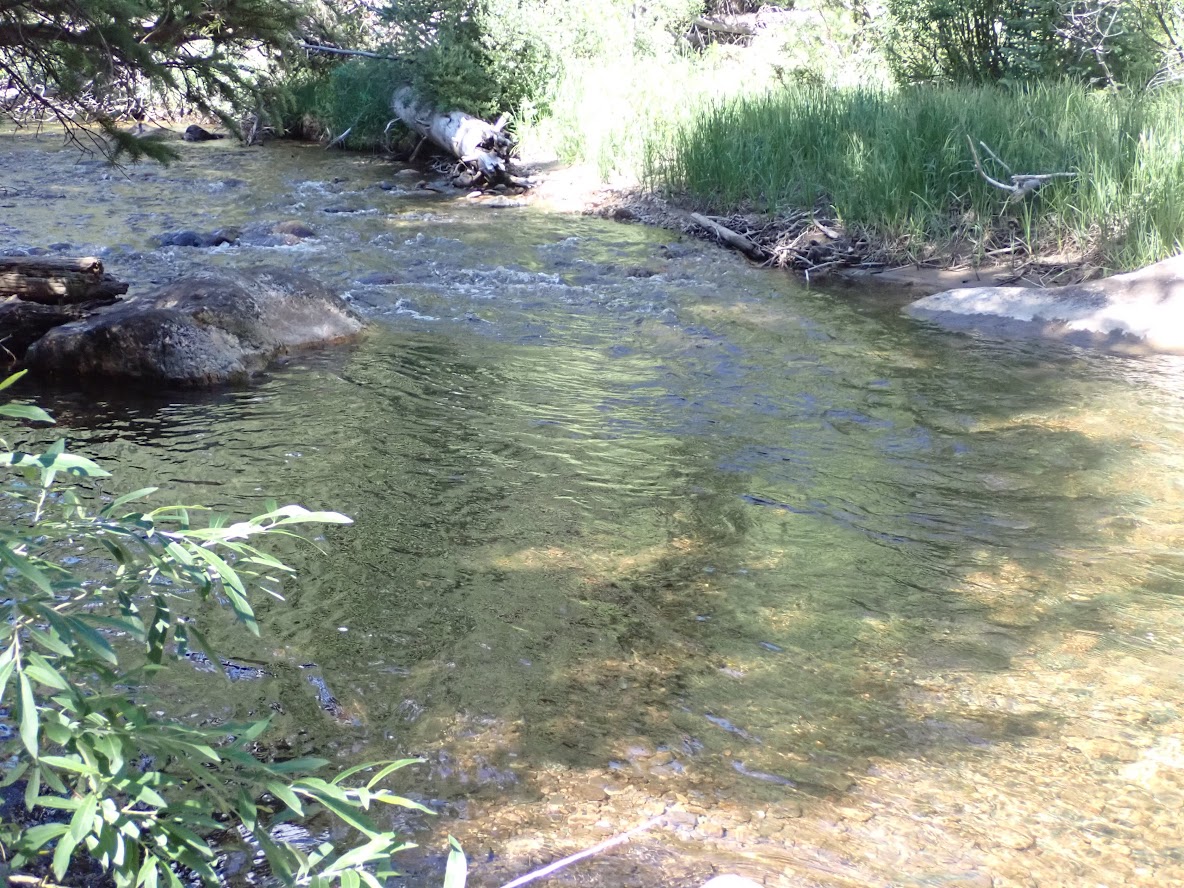 Even the Shadow Cannot Hide This Promising Little Pool 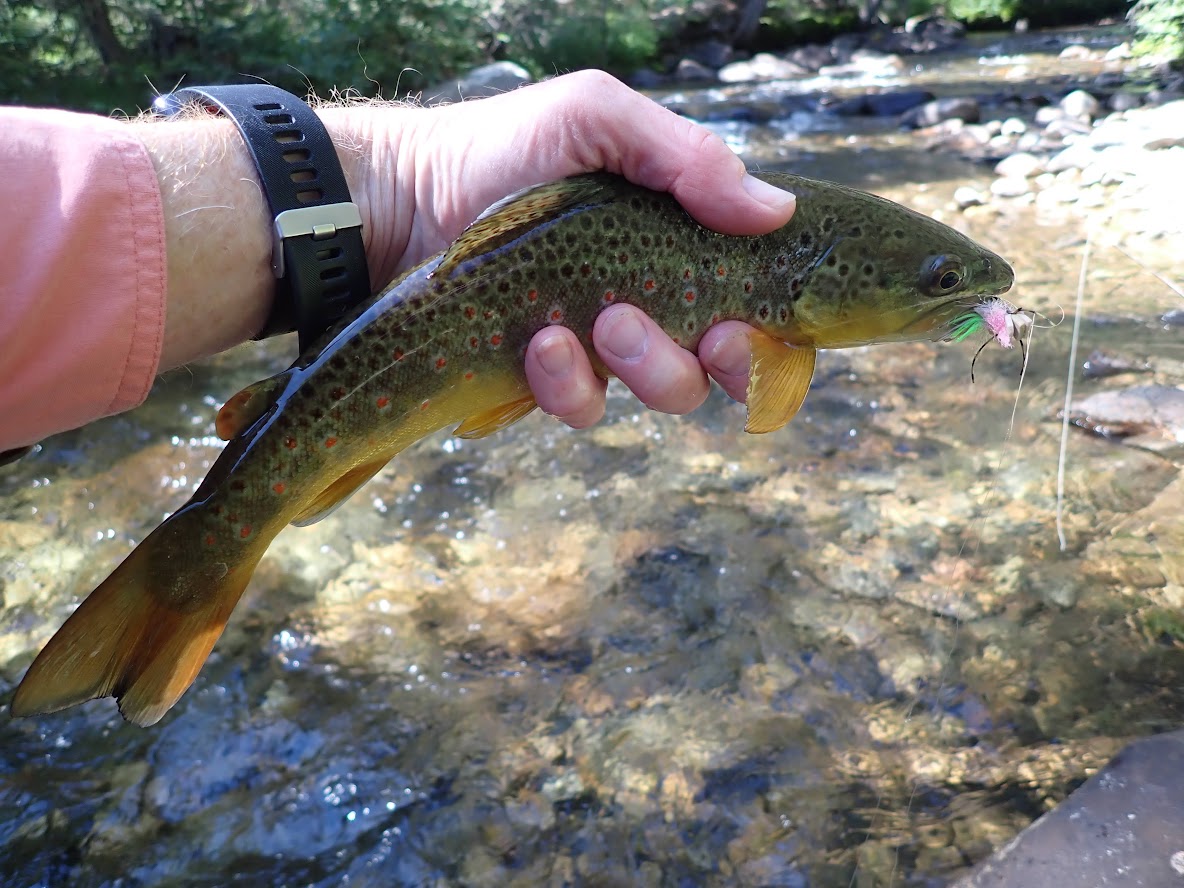 When I reviewed my report on this blog from my previous time on St. Louis Creek, I noted that a Jake’s gulp beetle trailing a beadhead pheasant tail created a fair amount of success, and I was tempted to replicate those same offerings on Friday. However, when I began fishing at 10AM, the creek was mostly covered in shade interspersed with intermittent sunlight, and I was concerned about my ability to track the beetle in the variable light conditions. My uncertainty over the lighting prompted me to tie a tan pool toy hopper to my line as the surface fly, and beneath it I added a beadhead pheasant tail nymph. These two flies maintained their position on my line between 10AM and noon, and they generated twelve landed trout. All the morning fish in my net were brook trout except for one outlier, a twelve inch brown trout that elevated and smashed the pool toy in a deep slot next to a large exposed boulder. 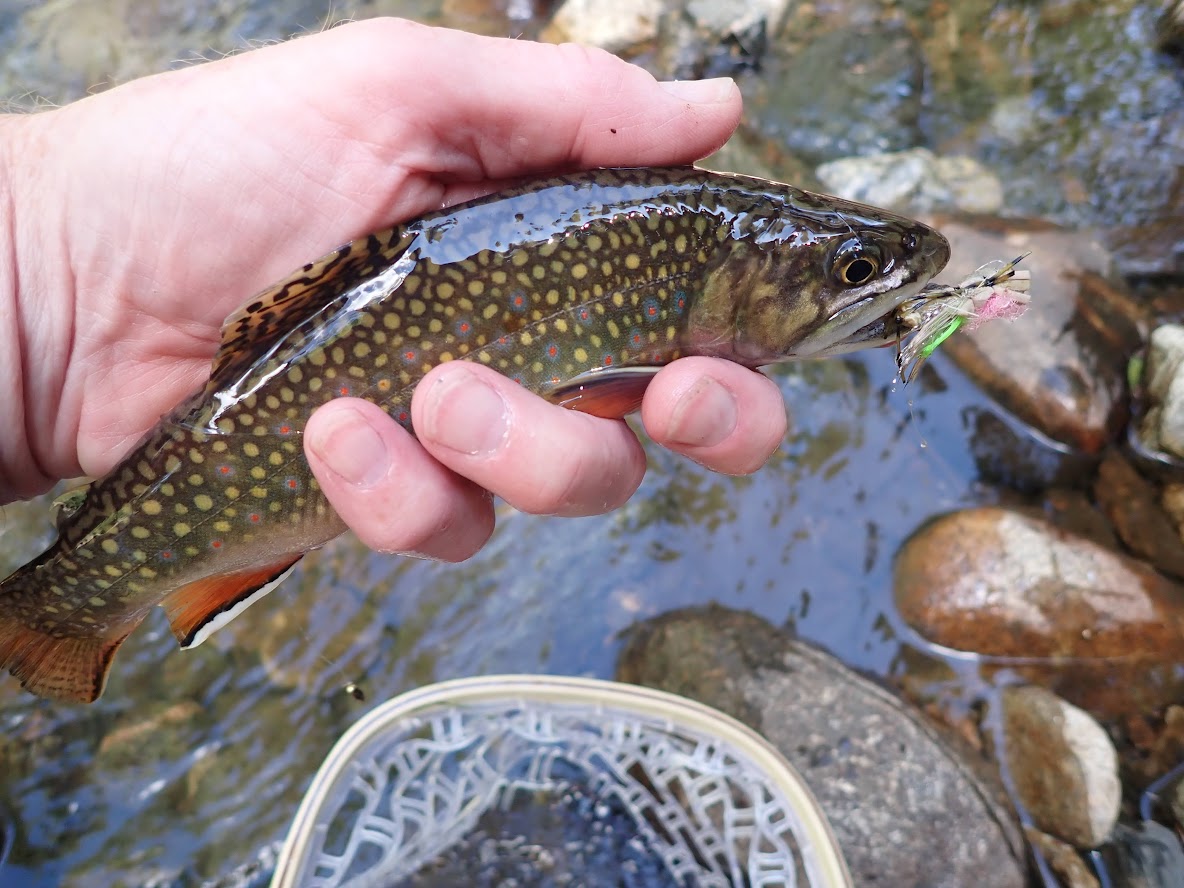 The brook trout measured in the six to nine inch range, but their vivid colors made them extra special in my opinion. I probably endured one temporary hook up or refusal for every fish landed, but many of the escapees were probably undersized char.

After lunch I decided to shift tactics, and I migrated to a size 12 peacock hippie stomper fished solo. The move proved successful, as I boosted the fish counter from twelve to eighteen, and I moved at a fairly swift pace while flinging the stomper to every possible nook and cranny that might contain a trout. Once I attained eighteen netted fish, I approached a very attractive deep pool, and after the hippie stomper failed to generate interest, I decided to once again add a nymph on a dropper. In this instance I chose a beadhead hares ear. as I was seeking something a bit larger and heavier to probe the depths of honey holes. The tactic delivered results, and the hares ear produced four trout, while the hippie stomper contributed a few additional fish. 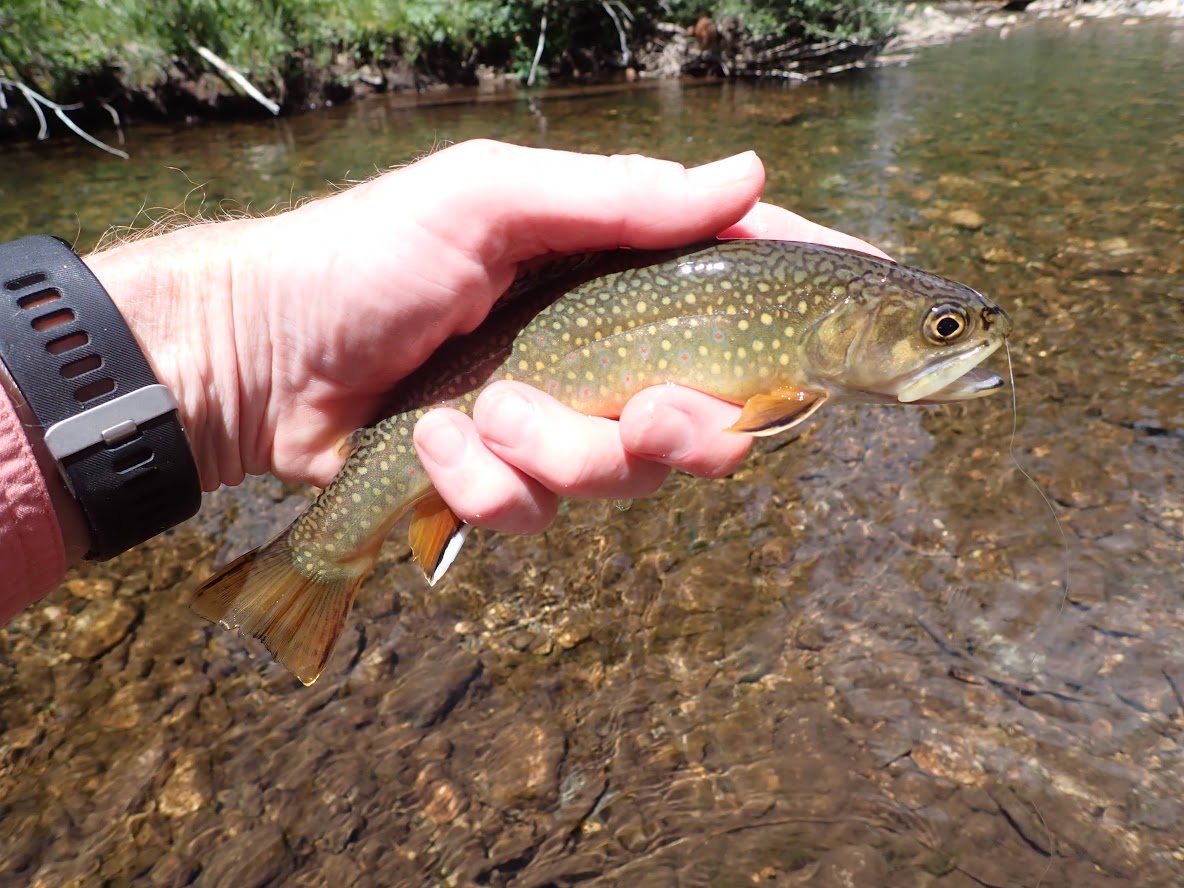 Lighter Color on This One

During the last hour of the day the trout interest subsided noticeably, and my catch rate shrank in a commensurate fashion. I cycled through some changes in the nymph component of my system and tested a bright green caddis pupa, ultra zug bug, and a parachute green drake. The ultra zug bug accounted for one trout, and the parachute green drake delivered the final fish of the day. I spotted one western green drake, as it slowly fluttered toward the sky from the stream, and that sighting caused me to adopt the double dry with a green drake imitation. 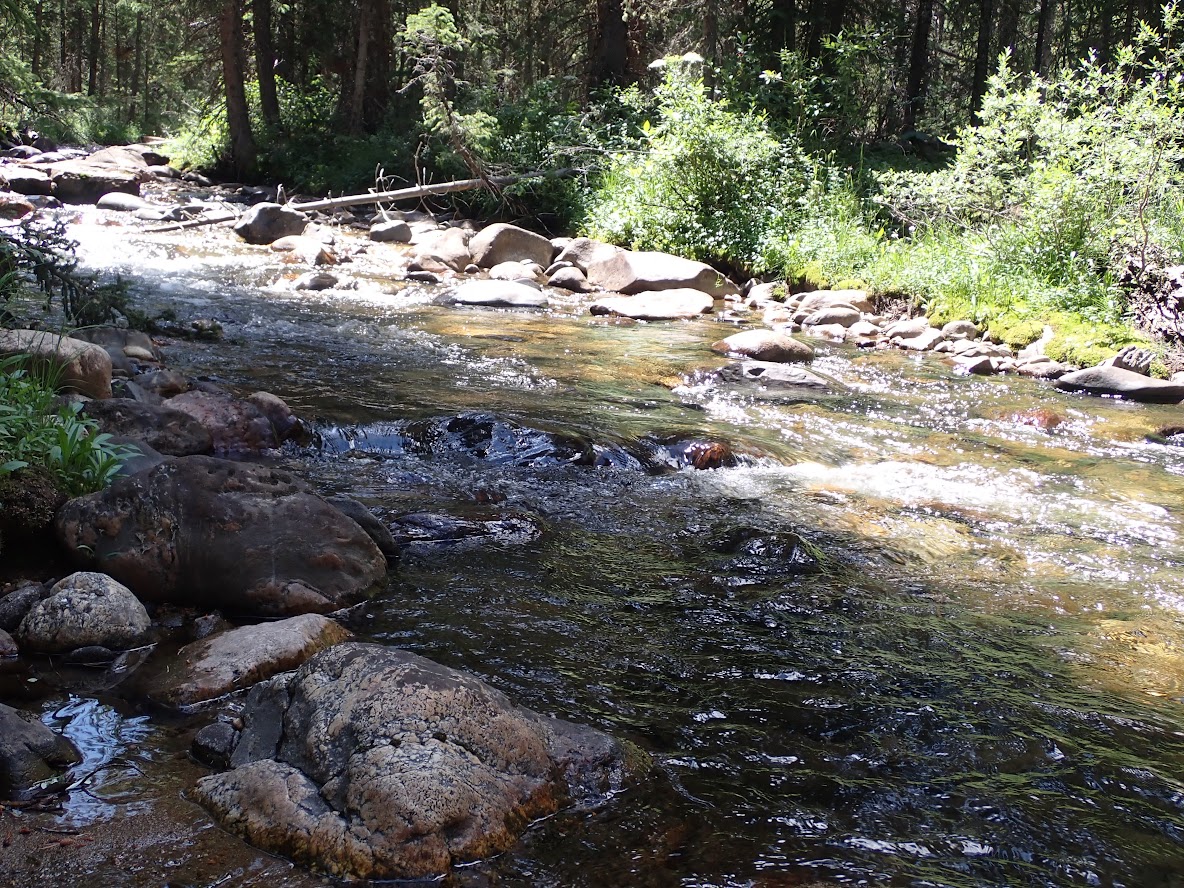 A Couple Spots to Explore

By three o’clock the catch rate slowed noticeably, and I reached a bridge, which forced me to climb a bank to the road. The fish count rested on twenty-seven, and I was quite weary from climbing over slippery rocks to cast to small wild brook trout, so I called it quits and hiked .6 mile back to the car. Friday was a fun day on St. Louis Creek. Sure, the fish were quite small, but they were not that easy, and the low, clear water conditions forced me to approach with stealth and long casts. I witnessed numerous spooked trout, as they darted from beneath a bank or rock upon my careless approach. The brook trout compensated for their lack of length with splendid colors and glistening spots. I had the entire stream section to myself, and I lost myself in the pursuit of trout and enjoyment of solitude. Something can be said for that.