On my second day of back to back fishing I decided to make the trek to Wildcat Canyon on the South Platte River. I did this last year at the end of August with the Costantini’s, and I wanted to see what it was like a bit earlier. The stream flows were at 167 cfs compared to 150 at the time of the Constantini vacation. Would this make fishing too difficult? One expects conditions to be good when committing to a three mile hike to access the river. Realizing that a two hour drive and one hour hike were in my future, I departed the house at 6:30AM. I encountered some minor traffic slow downs, but on the whole the trip was as expected and I arrived at the trailhead at around 9:15. I applied sunscreen and filled my backpack with the essentials for a day of fishing three miles from the car; lunch, raincoat and fishing essentials were included 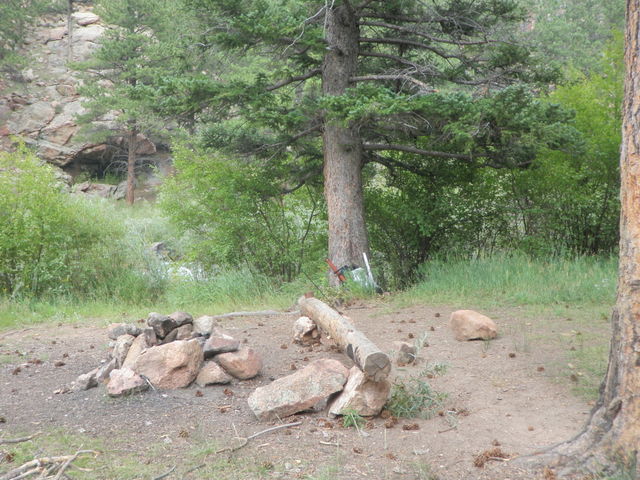 I set off at a strong pace, but it took me an hour to negotiate the gravel trail through the sparse vegetation and ponderosa pines. I established a base camp at the large log bench, the same spot selected on the Constantini trip and on previous trips with Dan and Jane. I put on my waders and prepared to fish and stashed my backpack, lunch and spare rod under a tree by the river. I headed down the path to a spot just above the narrow cascade where the river shoots through some rock canyon walls. The river was higher than any previous visit, but quite clear and there were numerous good holding spots. I didn’t want to risk crossing the swift current in the center of the river, but there was plenty of water to cover. 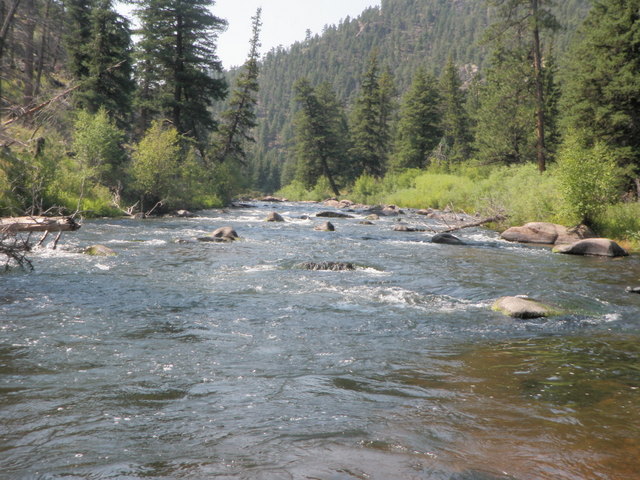 Unlike the previous day, Friday would prove to be a day of minimal fly changes. I began with a yellow Letort hopper and knotted a beadhead hares ear to the bend with a long tippet extension of approximately 2.5 to 3 feet to account for the extra water depth. I began tossing casts at the tail of a nice long pool and stood below where the current spilled over a large rock. On the fifth or sixth cast the hopper dipped as the fly began to drag at the lip and I lifted my rod to make sure I wasn’t snagged. Instantly I felt some weight and the throbbing of a nice thirteen inch brown and brought it to my net and photographed my first fish of the day. After releasing this surprising catch, I landed a second twelve inch brown in virtually the same spot and then a third four or five feet further up in the pool. 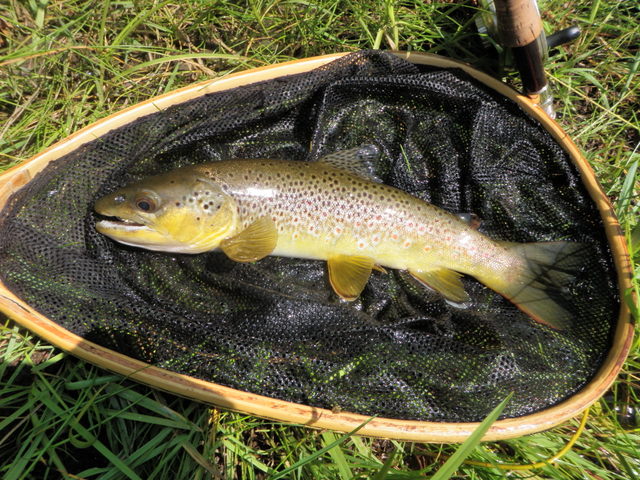 First Fish of the Day

The next hour would continue in roughly the same manner as I hooked and landed nine fish before 11:30. All the fish except one were brown trout and all hammered the beadhead hares ear and all were taken from the pockets and runs in the fifteen feet of water out from the right bank. I did prospect some of the attractive mid-river holding areas, but these casts were not productive. I added a tenth fish to my total in the next half hour as things slowed down a bit and decided to exit the river at the tail of a long smooth pool and return to my base camp.

When I arrived back at the long log, I ran some drifts through the delicious large pool next to the campsite, but this didn’t produce any action. I returned to the log and pulled out my lunch and found a spot next to the large pool and observed while eating. There was little insect activity evident as I watched. 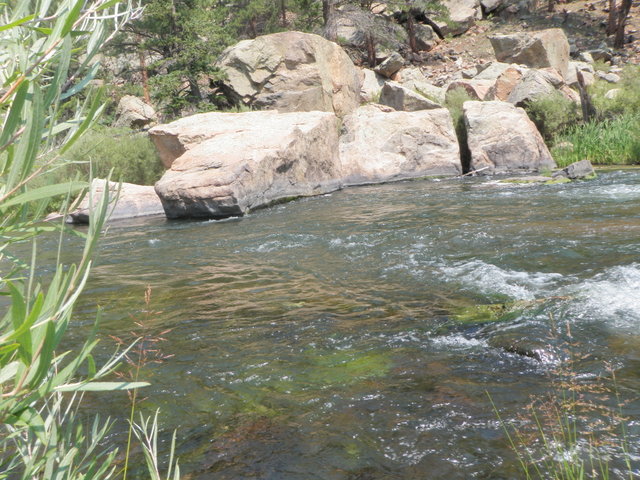 Pool Next to Lunch Spot

After lunch I grabbed my rod and gear and hiked back down the path to the point where I exited the lower end of the long smooth pool where I began working my way upstream. The slow deep water proved to be unproductive, however, when I resumed fishing the faster water above the pool with more rocks and short pockets and runs, I picked up another pair of browns. It was around this point that I decided to forego the Letort hopper which required frequent attention to maintain buoyancy, and substitute a Chernobyl ant. The fish were locked on the beadhead hares ear and ignoring the hopper, so why not use a foam fly as an indicator.

At around 1PM some clouds moved in and blocked the sun for longer periods, and during these intervals I noticed some tiny mayflies rising from the stream like miniature hot air balloons. This prompted me to add a third fly below the hares ear, a RS2 imitating a BWO nymph. This combination would serve me well between 1 and 3 PM as I experienced some of the most ridiculous insane fishing of the season.

I flicked the Chernobyl and trailing nymphs to all the likely pockets and spots within 10-15 feet of the right bank and the fish were all over the nymphs. In addition an occasional brown would slurp the Chernobyl, but the most popular fly to the chunky browns was the hares ear nymph. It was one of those rare occasions where the fish weren’t that selective, and I didn’t have to go through a series of fly changes to figure it out. Most of the time I made casts directly upstream and the Chernobyl would stop or pause and I’d lift the rod and find myself attached to a fish. A few times a fish jumped on the nymph as soon as it hit the water. I’m always amazed by this circumstance as it is almost like the fish was looking for a nymph to fall in the water, a totally unnatural occurrence. 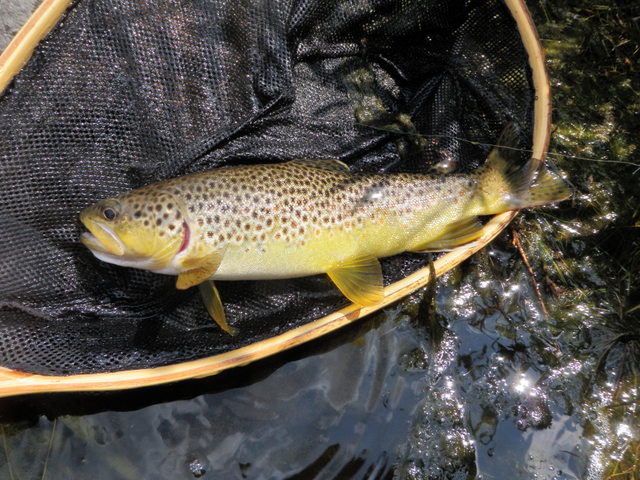 I landed a couple of fish on the RS2, but I concluded it was largely a nuisance and unnecessary as the beadhead hares ear was the main fish attractor. Two or three times I landed a fish with the Chernobyl in its mouth and in the fish’s efforts to escape, it wound the two trailing nymphs in a ridiculous tangle around the top fly. I’d have landed even more fish without these interruptions to untangle a massive monofilament mess. After the third such episode I clipped off the RS2 and the hot fishing continued unabated.

For two to two and half hours I rolled up fish after fish and finally finished with 35 landed. The catch rate did slow a bit over the last half hour, but I’m sure I could have continued landing fish until dark if I didn’t have the prospect of a one hour return hike and two hour drive back to Denver before me. The mystery of Friday is why were the trout so aggressively feeding on my beadhead hares ear nymphs? Why did I catch all browns except for one rainbow when previous trips yielded a majority of rainbows probably in a 60/40 ratio? Why did I catch fish along the edge and not in the middle? 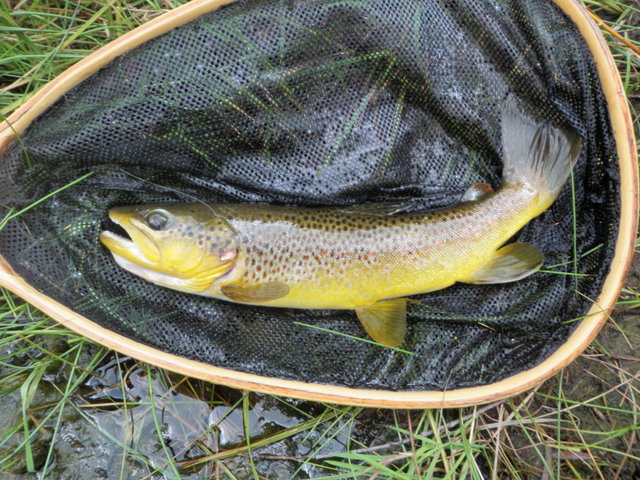 Nice Buttery Color on This 13″ Brown

My theory revolves around the change in stream flows. The chart showed a slow reduction in flows from 200 to 167 so perhaps the fish were forced to the banks by the higher water and found it to their liking. Browns like the rocky margins of a stream so that is why I caught primarily browns. Perhaps the higher flows prevented them from feeding, and my hares ear nymphs were a welcome relatively large treat tumbling along in their feeding lane. The other surprising thing to me was the size of the brown trout. Nearly all the fish were chunky fish in the 12 to 14 inch range. They were brightly colored healthy fat fish that put up strong battles for their size. These fish were clearly larger on average than the rainbow/brown mix I experienced in previous trips.

It was a great day of fishing in a remote environment with no one else present. I passed three backpackers coming in along the trail on my hike back to the car. I’ll certainly figure out a way to return as soon as I recover from the physical exertion.