Location: Whale Rock area and then just past town of Trumbull

Would all you readers agree that a ten fish day on March 13, the first outing of the season, is a great day? Somehow the accomplishment felt cheap, but you’ll have to read on to understand.

High temperatures were forecast to be 75 degrees in Denver so I made a spur of the moment decision to take the day off and head to the South Platte River downstream from Deckers. I checked the flows and they were in the low 200’s, and that is pretty nearly ideal for the South Platte in that area. I checked a report, and it said the water was clear and unaffected by snow melting at the lower elevations. I took my time getting ready in the morning as I knew the air temperatures would be rather chilly until late morning so there was no need to be there early. I created a fishing packing list on my iPhone in hopes that it saves me from forgetting a critical item on future trips.

The Santa Fe was out of the garage by 8:45 and I was on the water fishing by 10:30AM. As I suspected the air temperature was in the low 40’s when I began so I wore my Adidas pullover and a fleece layer on top of that. I parked the car in the Whale Rock area and hiked down the road a bit and then down the steep bank to my traditional first day starting point just above a steep cascade among the many large boulders. I decided to go back to my historical South Platte workhorse combination of a pink San Juan worm and beadhead pheasant tail. I worked the nice deep eddy in front of me, but despite some great drifts didn’t connect with any fish. I clipped off the pheasant tail and replaced it with an orange scud and moved upstream.

It didn’t take long before I snagged on the bottom and in my efforts to extract the flies, I snapped them both off. I only had one more pink worm with me, and it wasn’t producing so I plucked a beadhead hares ear from my patch and below that I tied on a teal baetis nymph. Again I began to work the water upstream to the large bend and eddy just below the parking lot. The river at this point deflects off the far bank and then slowly rolls through a fairly deep hole with a small slow moving eddy and surface foam between the hole and the bank. I spotted a sporadic rise in the foam, but decided to stick with the nymphs before going to a dry. I didn’t see any blue wing olives on the water, but did spot the occasional midge, so I assumed the fish were sipping midges in the surface foam. I clipped off the teal baetis nymph and replaced it with a tiny dark olive midge larva. This fly is about as basic as it gets with dark olive thread for the body and a fine silver rib and a silver bead. 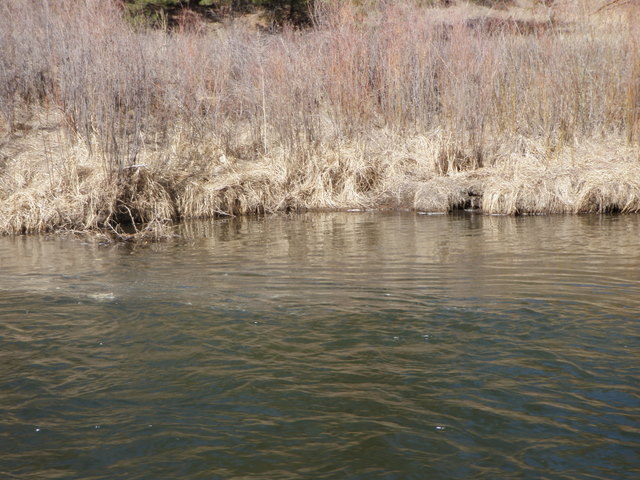 Ten Fish Landed from This Run and Eddy

I drifted the nymphs along the seam and on the fifth drift the indicator made a subtle pause. I thought I was hung up so I lifted the rod and was surprised to feel a tug. I played the fish for a bit before it released itself downstream. I cast again and sure enough saw another pause and set the hook harder this time and landed a small brown. This was the first fish of the season so I snapped a couple photos even though I was too far from the bank to position it on my net as I normally do. 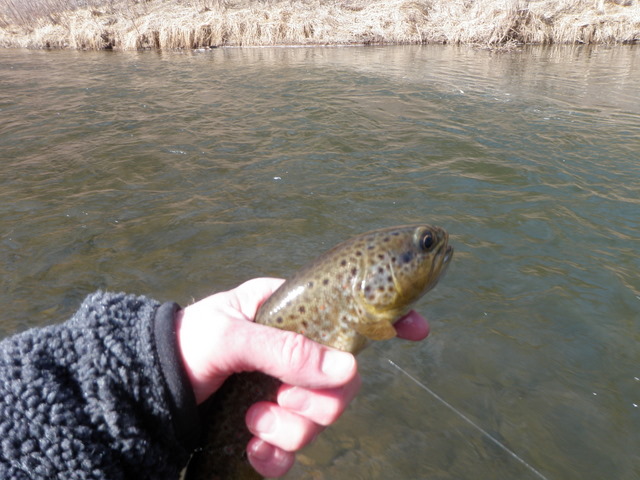 Same Fish Held Out of the Net

The next hour proved to be a great introduction to 2012. I kept running the two fly nymph combination through the deep run and along the seam and landed another nine fish. They were all browns in the 9-11 inch range, and they were mainly taking the tiny midge larva fly.  Perhaps two fell for the beadhead hares ear. One of the last of the ten probably extended to around a foot and I photographed this one on my net on the bank below the parking lot. Meanwhile the cruisers continued to sip something very small in the eddy across from the subsurface action. 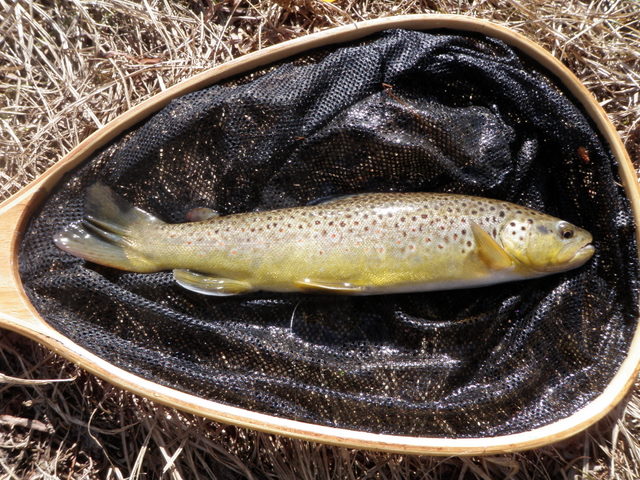 Largest Fish of the Day

At noon the action slowed and by now my feet were numb from the ice cold water. I decided to head back to the car and eat lunch and warm up my feet. After lunch I eagerly anticipated testing the two flies on different stretches of the river, so I wandered upstream a bit to an area with huge boulders and numerous large deep pockets and runs. This water was slightly faster than the bend pool. I managed one temporary hookup, and saw another decent fish follow my flies as they did a swing at the end of the drift, but failed to take. I moved on above the last large boulder and attempted a few casts where the water cut deep in front of the boulder, but again no action. 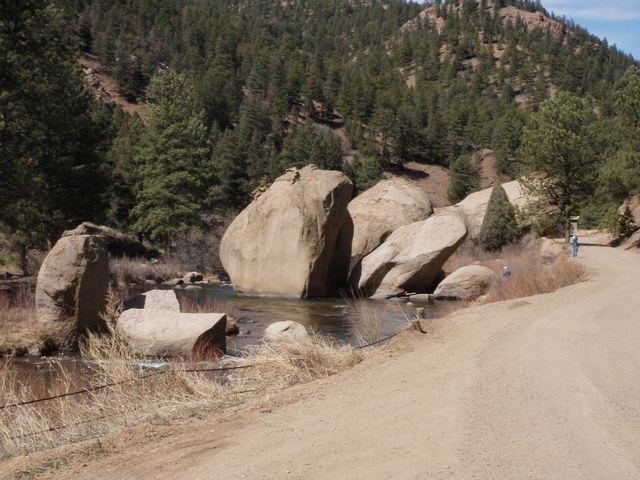 I returned to the car and drove to the next U-shaped parking lot above the large boulder area. From here I hiked up the road to the rock garden area that has always produced for me in past trips. Unfortunately Tuesday was not going to be one of those days. I cast to all the likely areas with no success and didn’t even spot a fish. When I reached the end of this stretch of water, I returned to the car and decided to drive to the upper special regulation water just below Deckers. I parked in a lot just beyond the town of Trumbull and hiked down the path and then fished upstream to the large bend where I encountered another fisherman. I spent an hour in this water and spotted one fish. I worked my nymphs deep through some juicy holes and runs to no avail. When I spotted a small fish and it didn’t respond to my nymphs, I decided to try a dry dropper and tied on a yellow Charlie Boy hopper trailing a beadhead RS2. This didn’t work either and I continued fishing this combination upstream through some nice water for the next 15 minutes.

When I encountered the other fisherman blocking my path upstream I decided to move one more time. I returned to the car and drove up the road around the bend to the next pullout. But it was now 3PM and my heart was no longer in it, so I removed my waders and drove back to Denver.

Ten fish on my opening day is a great story, but I’m disturbed by the fact that I caught them all in the same place over a one hour period and couldn’t land a fish anywhere else. Perhaps the fish are still schooled in ideal winter holding locations, and I didn’t manage to find any more of these spots? The fishless afternoon certainly destroyed the confidence I built up from 11-12.