Weather was the impetus for my rare weekend day of fly fishing on Saturday, October 26, 2019. My daughter, Amy, visited from October 17 through October 20, and I devoted my time to her and put a moratorium on my fly fishing efforts. Cold temperatures and a snowstorm prevented me from pursuing trout between Octoboer 21 and October 24. A glance at the seven day forecast revealed that back to back storms were about to slam Colorado on Sunday. October 27 and extending through Halloween. What recourse did an avid fly fisherman have?

One glimmer of hope filtered through my thoughts of despair. Saturday’s high in Denver was predicted to be seventy degrees, and this translated to the upper fifties in some of the nearby front range streams. The flows on South Boulder Creek were 82 CFS, and that was enough information to encourage a trip to the small tailwater west of Golden, CO.

The temperature registered 50 degrees, as a I pulled into the kayak parking lot, and quite a few vehicles occupied prime spots on the southern half, and as I pulled on my waders and assembled my Orvis Access four weight, several more anglers arrived. I experienced a brief taste of weekend fishing in the Colorado Rockies. 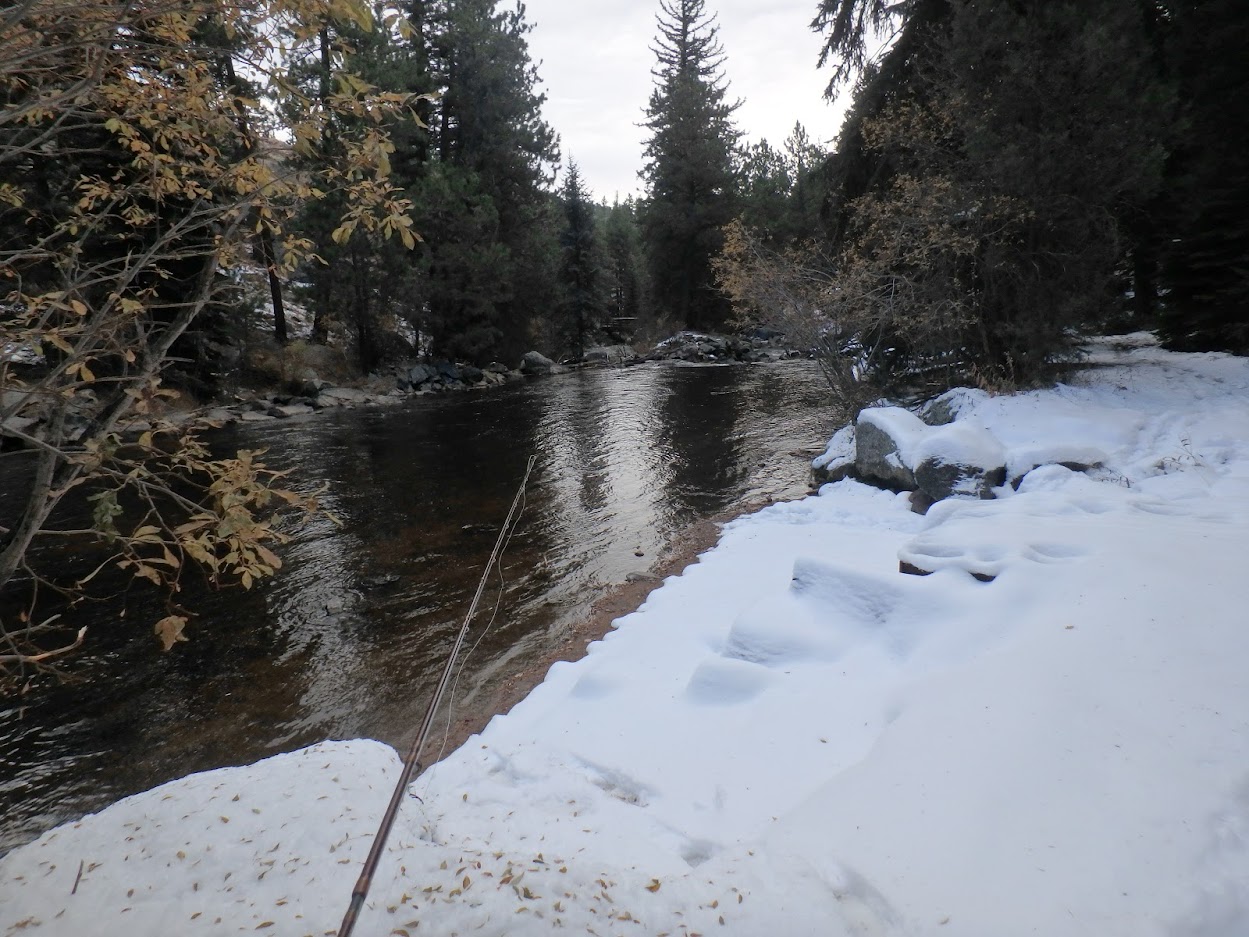 Deep Snow Next to Long Pool

As I trudged along the stream on the way to my chosen starting point, I was surprised to discover five to six inches of snow on the south side of the creek. The deeper than expected snow and the warming temperatures raised concerns over the water clarity as well as the chilling impact on the trout, but these misgivings would eventually prove to be unfounded. 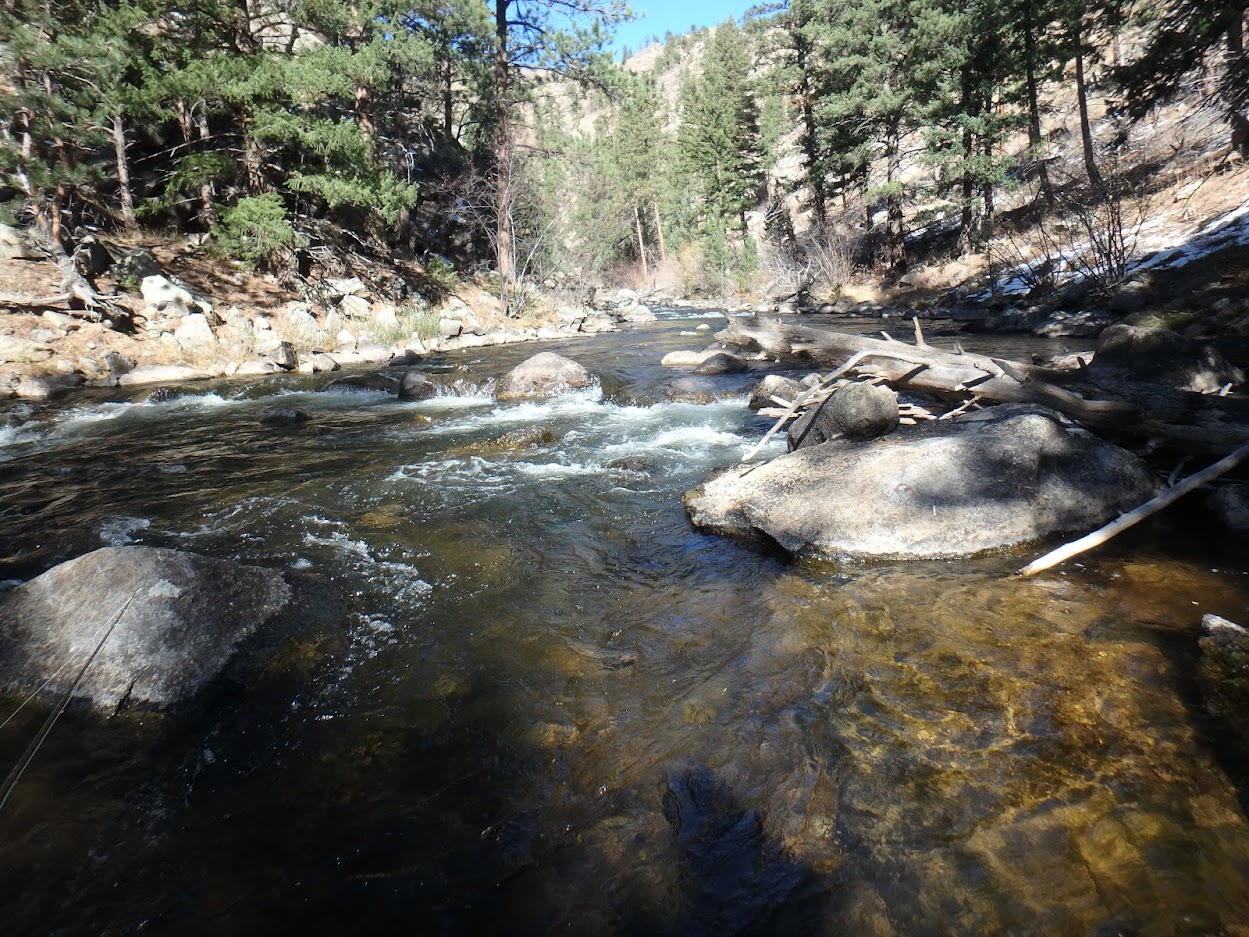 I arrived at my favorite starting location by 11AM, and I configured my line with a size 8 yellow fat Albert, a size 12 20 incher, and a salvation nymph. I viewed the 20 incher as a substitute for weight, because I wanted to get my nymphs to the bottom in the cold 82 CFS flows. Between 11:15AM and 3:30PM I retained the fat Albert and 20 incher as the upper flies in my three fly dry/dropper system. I switched the end fly out after lunch and shifted to a soft hackle emerger, but eventually reverted to the salvation, when I spotted some pale morning dun mayflies in the air. 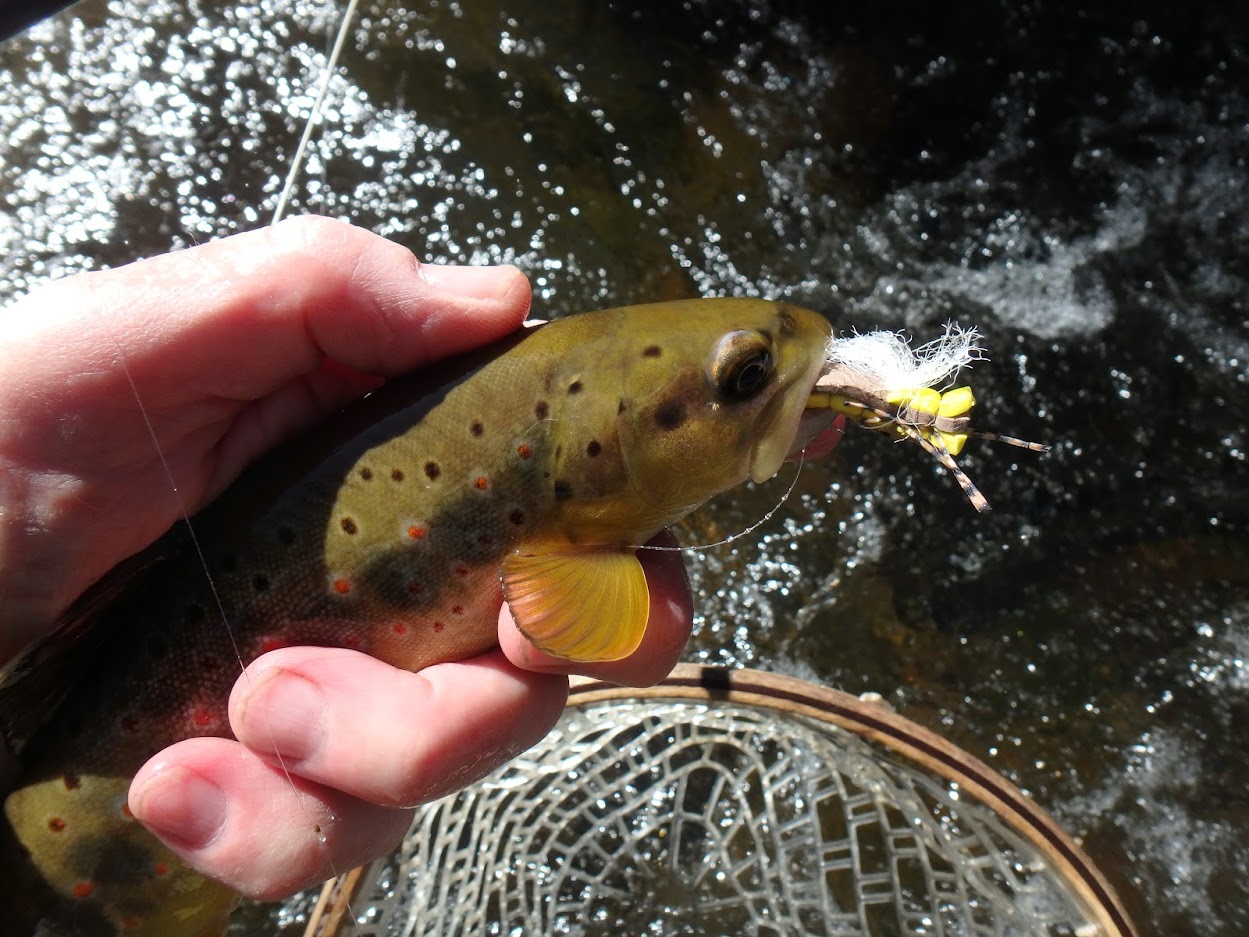 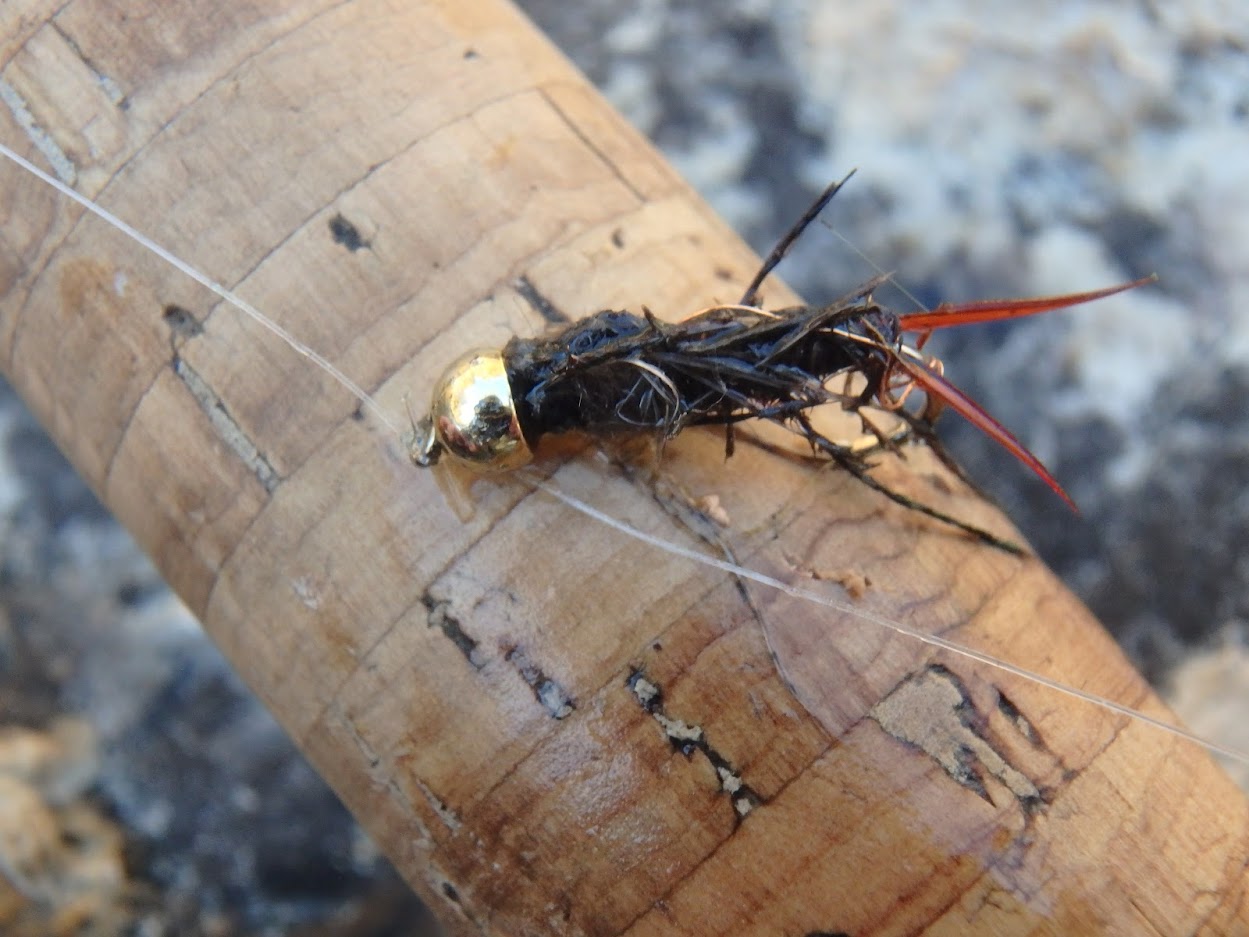 Mangled 20 Incher Was the Number One Fly

During the dry/dropper segment of my day I landed twenty-one trout including two rainbows and nineteen brown trout. One aggressive brown trout slurped the fat Albert, two brown trout nipped the soft hackle emerger, and two additional catches grabbed the salvation. The fourteen remaining netted fish savored the 20 incher, and I was very surprised, that a fly that was merely deployed to provide ballast proved to be the most popular. One rainbow was a respectable and chunky specimen, and a few of the brown trout extended to the twelve and thirteen inch mark. Other than these outliers, most of the fish fell within the nine to eleven inch range. 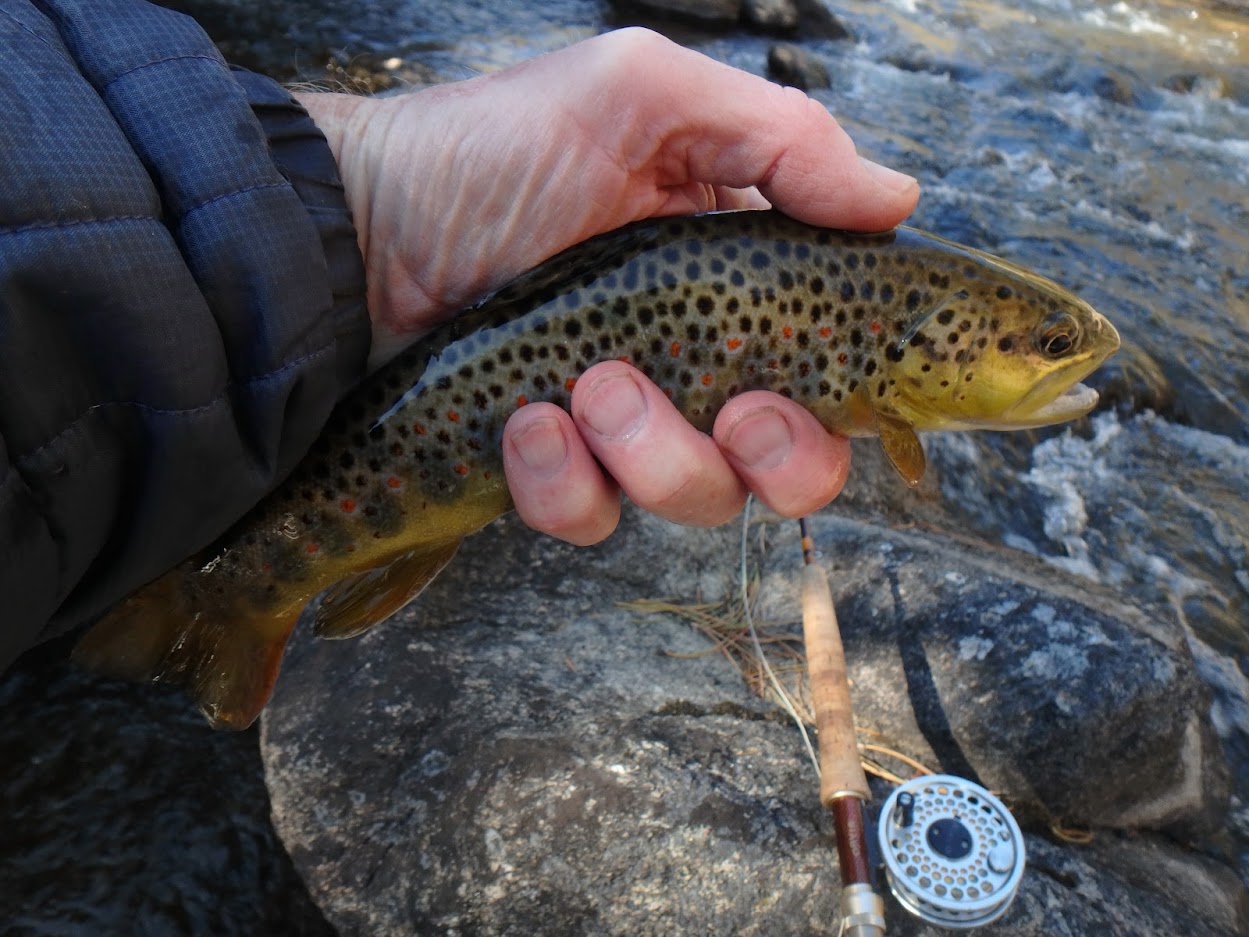 The most productive spots for brown trout were slack water shelf pools next to faster runs. The creek inhabitants conserved energy in these areas and picked off tumbling subsurface food offerings, as they drifted away from the faster current. In addition to the landed rainbows, I also tangled temporarily with some pink striped residents that escaped, and these trout seemed to prefer faster water and deep slots between large boulders. 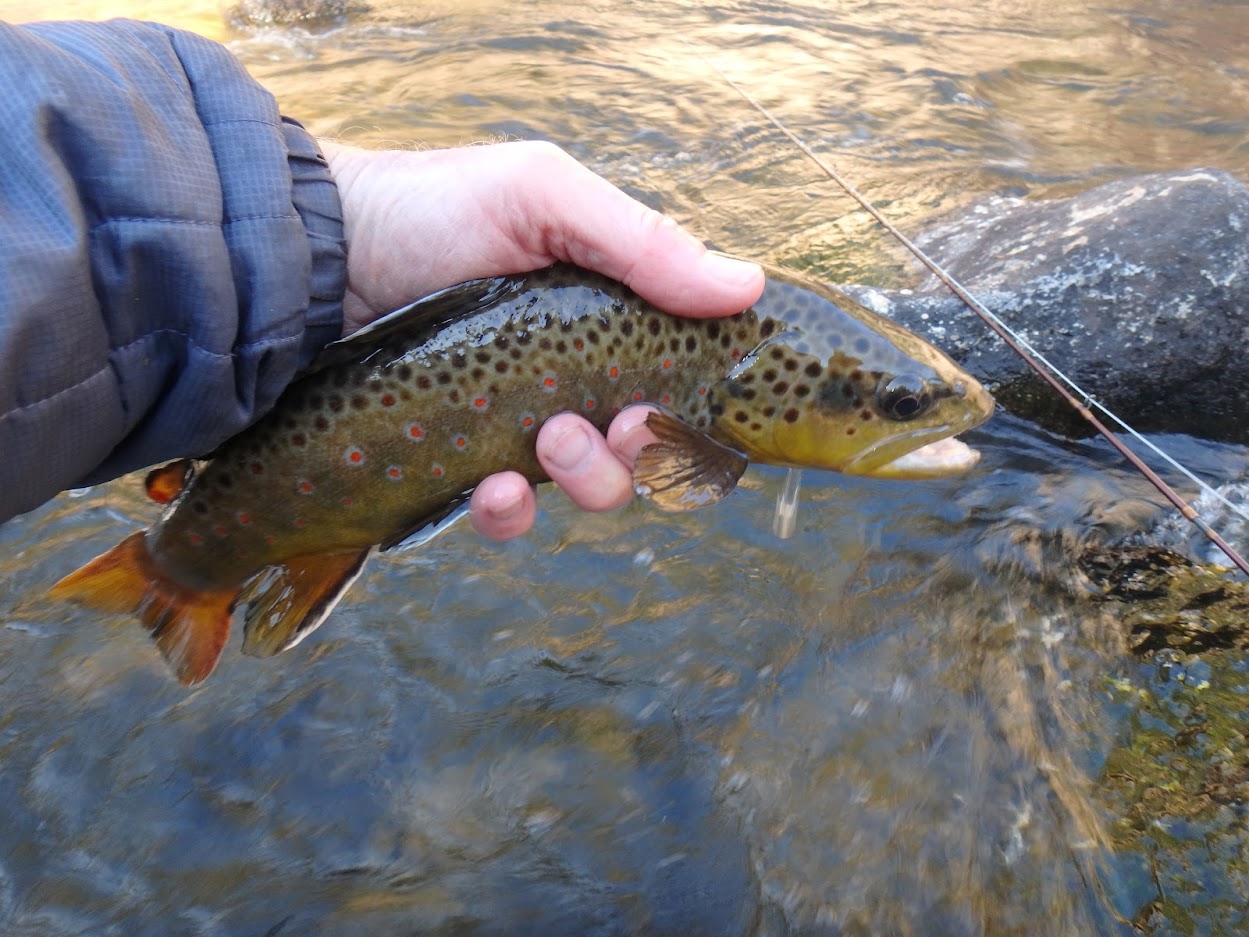 Pleased with This One 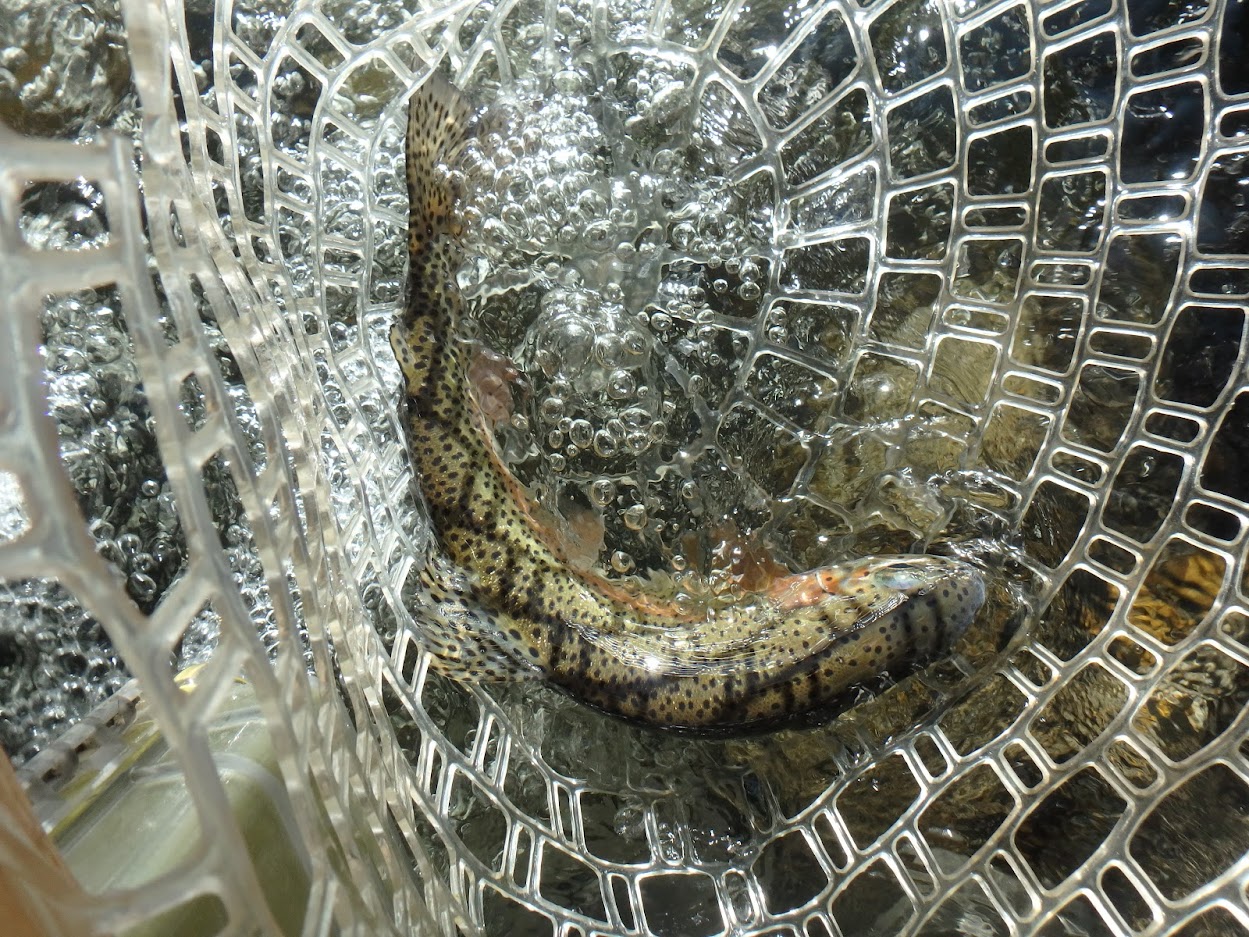 By 3:30PM I reached my usual end point, and I skipped around a narrow whitewater chute and then dropped back down to the creek. I cherry picked some above average spots in this section to no avail, and then I decided to begin my return hike. When I arrived at the pool, that I deemed to be the best on South Boulder Creek, I paused to observe and spotted three very subtle dimples along the main current seam. I could not resist the temptation to log some bonus time, so I clipped off the three flies and tied a size 16 light gray comparadun to my line. Why? It was just a hunch based on success at the same time of day and year on previous trips.

I made some quality drifts along the center seam, and induced a refusal, before I turned my attention to the section on the right, where two smaller runs angled from the bank back toward my position. I lobbed a cast to the right side, and a subtle swirl revealed itself below my fly. I quickly raised my rod tip and felt weight for a split second, and my optimism sank, as I realized that I probably put down a willing feeder. 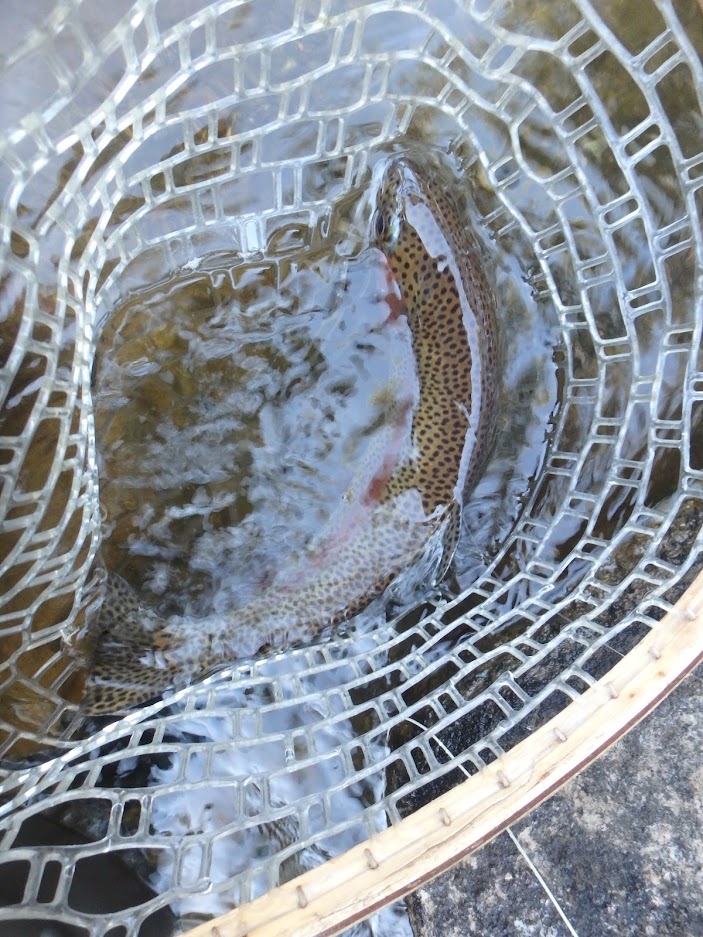 Surprise Rainbow on a Dry Fly

I returned my attention to the left shelf pool and the center current seam, but a series of casts were ignored. The shadows extended across the entire creek, and the lack of sun created a chill, when the breeze whistled through the branches. I entertained thoughts of resuming my trek to the parking lot but decided to lob another cast to the angled run on the right. The choice proved to be fortuitous, when another sucking swirl materialized beneath my fly, and this time I paused a split second and then executed a solid hook set. When the hook pricked the greedy feeder, it performed an acrobatic roll on the surface, and this revealed the brilliant crimson strip of a rainbow trout. The fight was on, and the battler crossed the right shelf pool several times before it relented and slid into my net. Whoa! A husky fourteen inch rainbow nestled in the bottom of my net, and I let out a self congratulatory hoot. 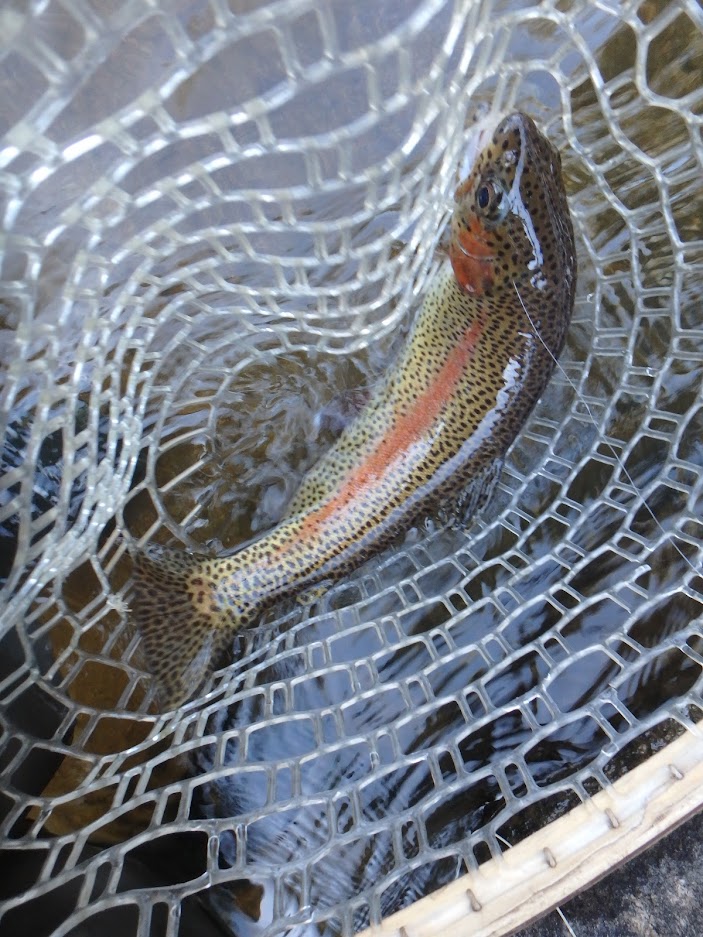 After releasing my prize catch of the day, I moved to the bottom of the left side of the pool, and I shot some relatively long casts to the slow section in the upper left area. Amazingly, despite the absence of rises, I enticed three trout to smack the light gray comparadun. Evidently I stumbled into a fly that matched a food form that was present in South Boulder Creek in late October. When my casts drifted through the pool without molestation, I stripped in the fly and proceeded on my outbound hike. I stopped at one more favorite pool and tempted a small rainbow to eat the comparadun, before I permanently called it a day.

What a surprise Saturday turned out to be! I landed twenty-six trout in total, and this included several in the 12 – 14 inch range. These results accrued despite the presence of snow and snowmelt. Five landed fish on a size 16 comparadun during the late afternoon shadows were icing on the cake. If this was my last outing of 2019, I would be satisfied with the memory.