I experienced a spectacular day on Tuesday, August 11 on South Boulder Creek, so I decided to replicate it on Friday, August 14. Predictably I was a vicitim of high expectations.

Traffic was uncharacteristically light on Friday morning, and this enabled me to arrive at the kayak parking lot by 8:45AM. The air temperature was in the low sixties, and it was obvious that Friday would evolve into another hot day. Based on prior experience I knew that the bottom release flows from the dam were extremely cold, and flows of 168 CFS meant that I would be standing knee deep in water most of the day. I quickly made the decision to wear my waders, and I put together my Sage four weight rod. 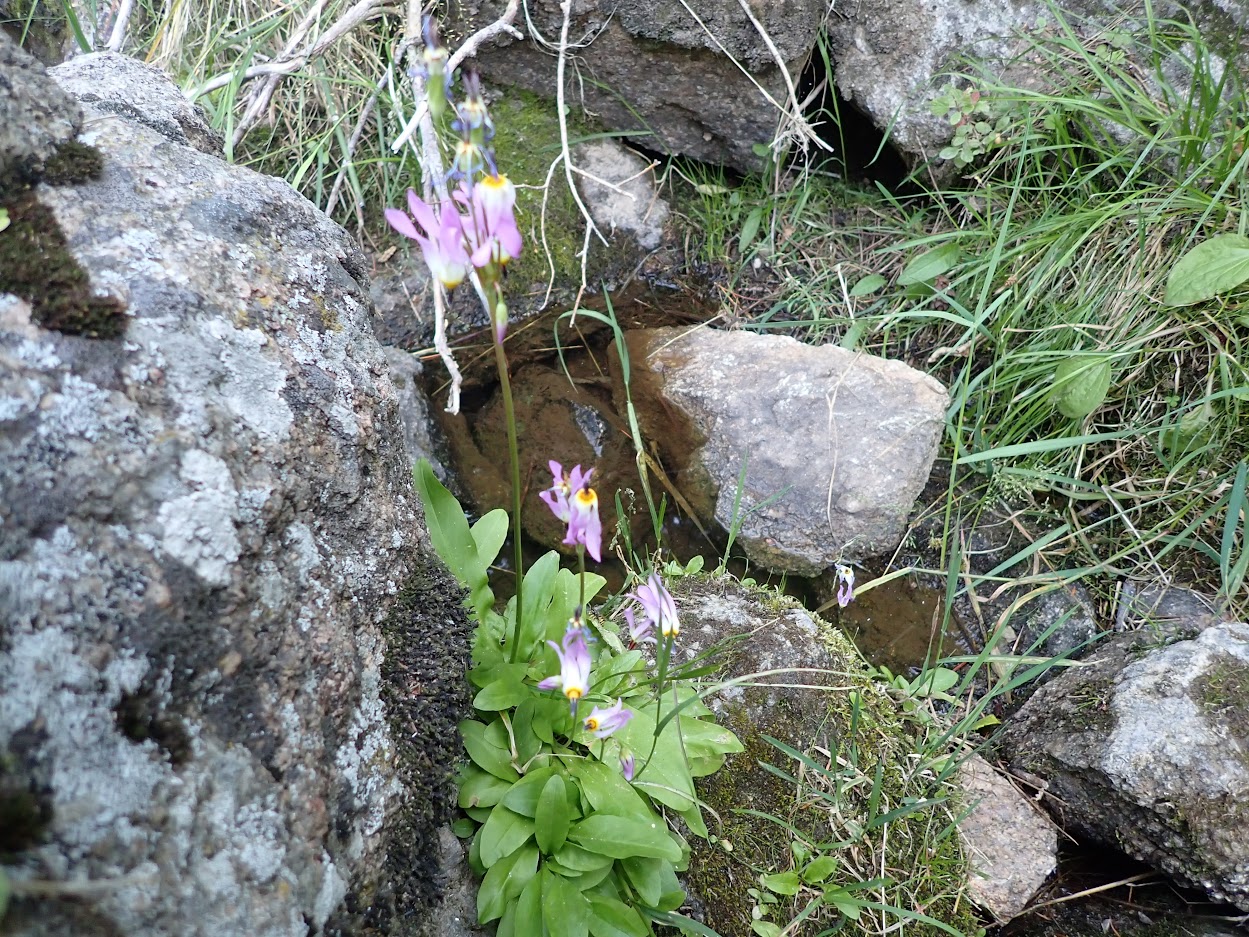 Two vehicles preceded me to the lot, and as I ran through my preparation routine, two additional gentlemen arrived. They were not familiar with the South Boulder Creek area and access points, so they immediately began questioning me about the matter. I explained that there are essentially three access points, and they were currently at the closest to the creek, although I warned them that the short trail to the creek below the dam necessitated a very steep climb out at the end of the day. One of the men appeared to be in his sixties or seventies, so I wanted to make them aware of the stressful climb. As I departed for the trail myself, it sounded like they were inclined to take the plunge. 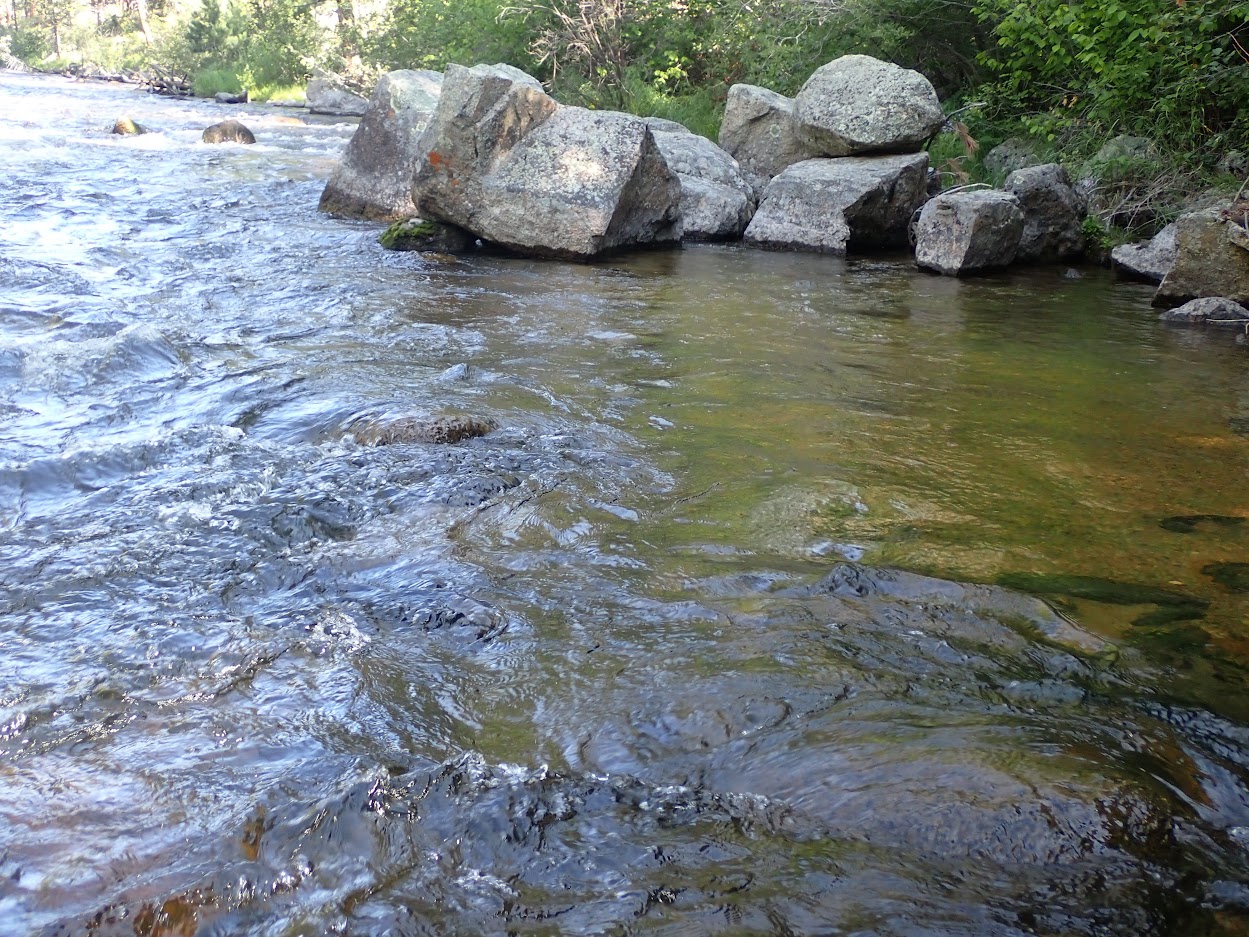 At Least One Trout Must Call This Spot Home

I hiked a reasonable distance from the parking lot and found myself along the edge of the creek ready to cast by 9:30AM. 168 CFS is higher than I prefer; as it reduces the number of attractive fish holding lies, prevents crossing to the opposite bank and mostly confines casting to the area between the right bank and the middle of the creek. The combination of a peacock hippie stomper and parachute green drake performed quite well in the morning on Tuesday, so I copied the strategy on Friday. I began in a gorgeous wide pool that represents one of my favorites on the entire creek, and fifteen minutes of focused casting and prospecting failed to produce one iota of interest from the resident trout. At this point I sensed that Friday was going to be a completely different experience than Tuesday. 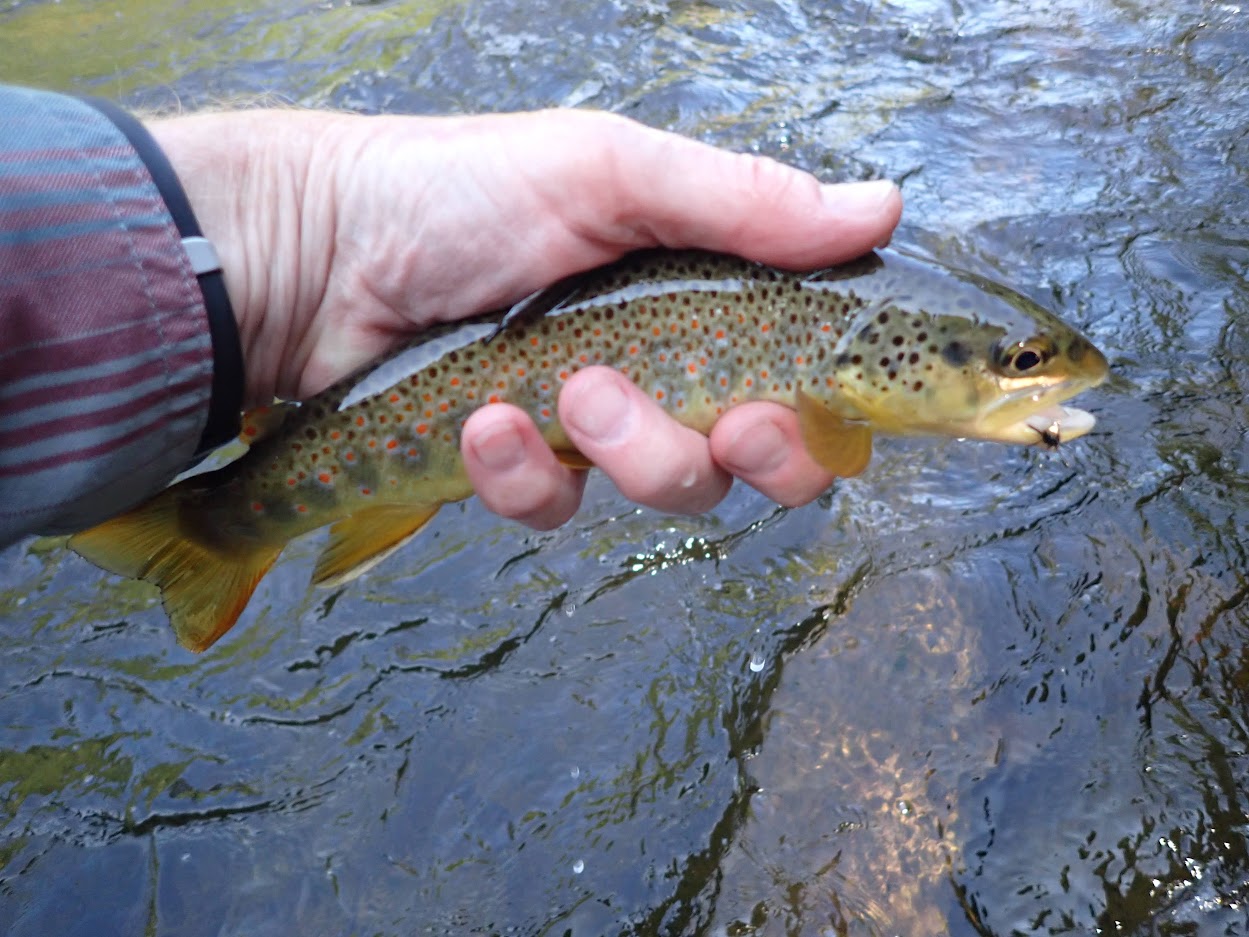 Only Trout Taken on a Nymph

I abandoned the double dry approach and adopted a dry/dropper configuration. In previous years I enjoyed some success with a prince nymph imitating a green drake nymph, so I tested this tactic on Friday morning. I deployed a tan pool toy hopper as the top fly for visibility and buoyancy and then knotted the prince in the top nymph position and then added a salvation nymph below it. The salvation choice was an attempt to imitate pale morning dun nymphs, in case they were present as well. The dry/dropper was allocated a fair share of stream time, and it allowed me to record my first landed fish; a small brown trout that gobbled the salvation, but otherwise I judged the method to be lacking. Fish were not responding to the hopper, and they generally ignored the nymphs as well. 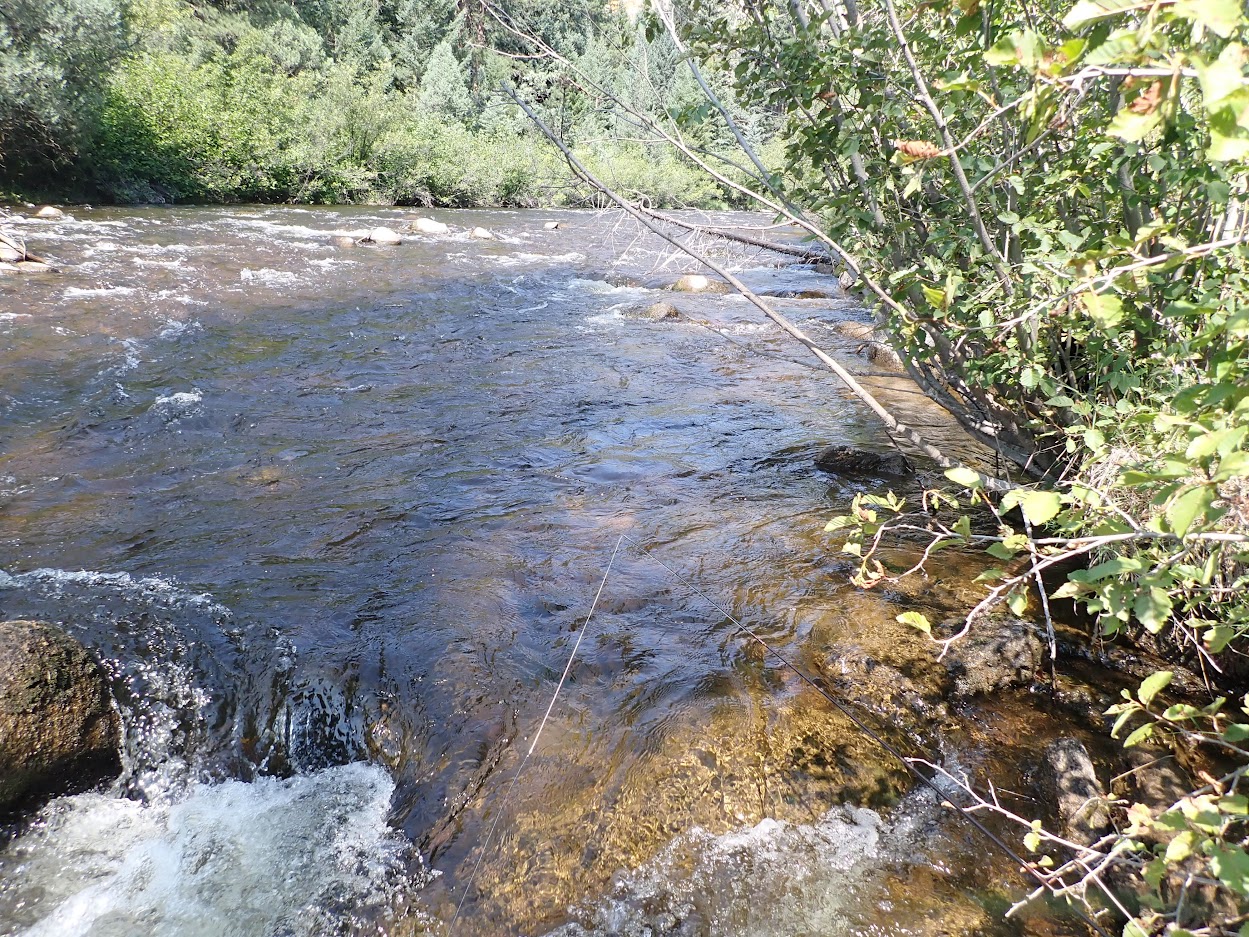 May Require a Left Handed Cast

My earlier than normal start and extra stream time, before the heat materialized, was largely squandered with one trout in 1.5 hours of fishing. I decided to revert to what worked on Tuesday, but to focus on green drake dries, and consequently I retired the hippie stomper. I selected a parachute green drake from my drake fly box, and I began to prospect with the solo dry fly. In short order a feisty eleven inch rainbow snatched the parachute, and my fortunes made a U-turn in a positive direction. Over the next hour I learned that most of the trout willing to eat my dry fly were tucked in slower moving water with some depth near the bank, and I concentrated my energies on these types of stream structure. 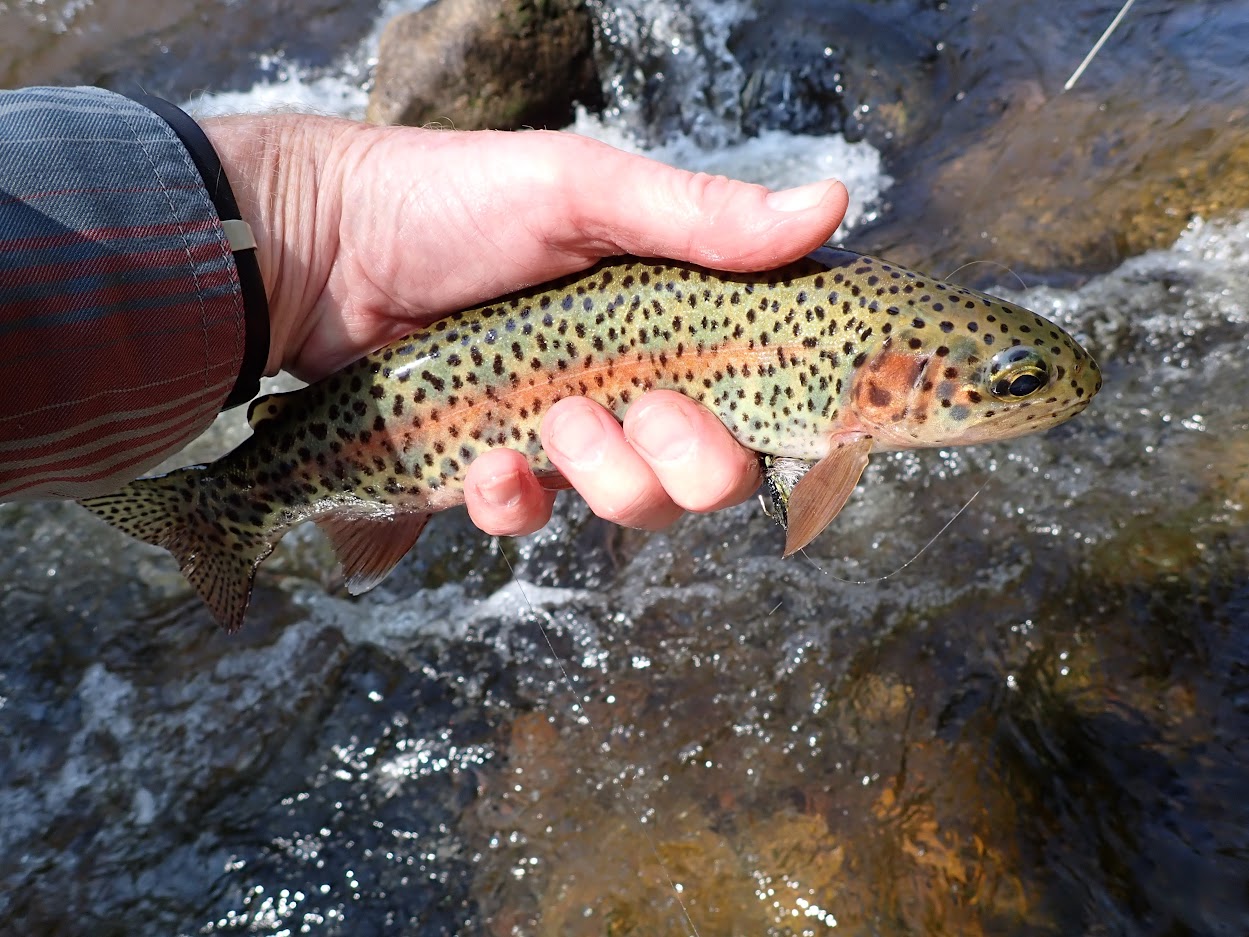 The remainder of my day on South Boulder Creek followed the script. I cast a single dry fly to likely fish holding lies along the right bank, and I steadily boosted the fish count from two to fourteen, before I called it quits. Unlike Tuesday this was not fast and furious action. Instead I worked upstream very methodically, and my persistence was periodically rewarded with a hungry eater. Although the quantity of fish landed lagged August 11, the size was on average superior, although thirteen inches represented the best fish of the day. Brown trout outnumbered rainbow trout by a two to one ratio. I cycled through four styles of green drake imitations including the parachute, comparadun, user friendly and May break cripple. The introductory test of the May break was disappointing, as no trout gave it a look. The user friendly delivered a fish or two, but then it created a streak of refusals and lost its prominent position on my line. 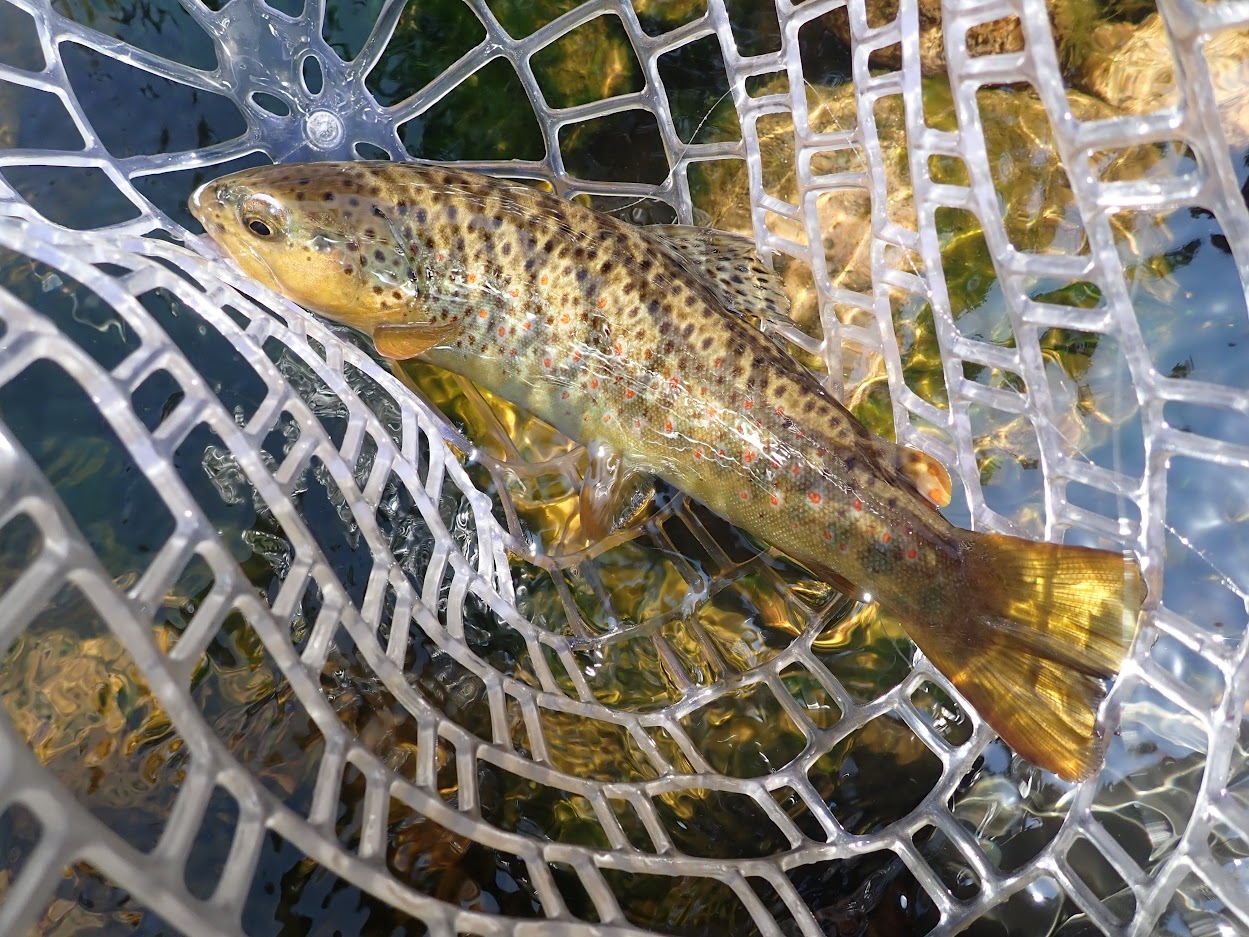 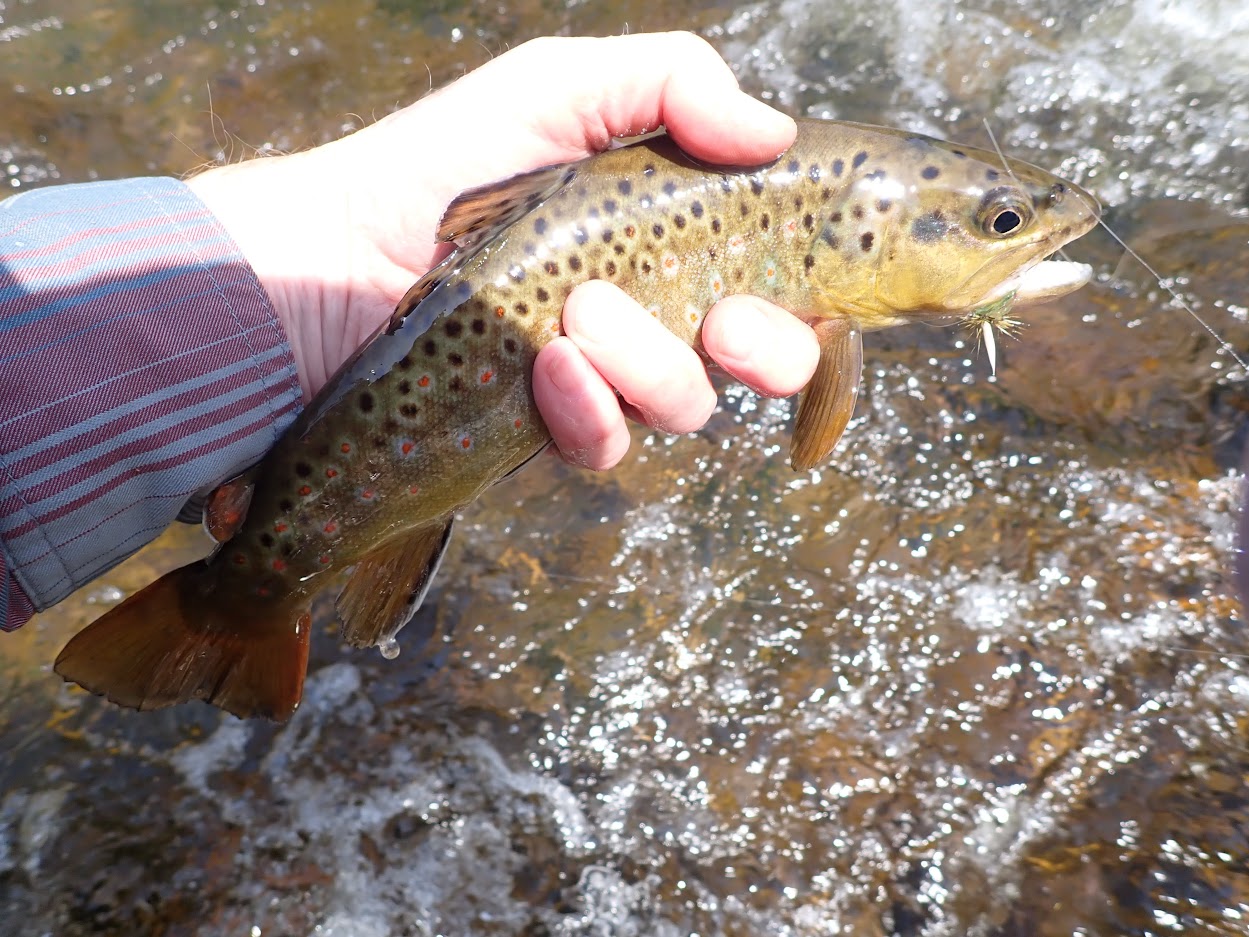 Quite Nice Brown for SBC

The parachute green drake and comparadun were the workhorse flies on Friday, and they accounted for the bulk of the landed fish. In one promising pool I observed some rises to smaller mayflies, which I presumed to be pale morning duns, so I added an eight inch section of tippet to the bend of the green drake and attached a size 16 light gray comparadun. The smaller mayfly proved its worth, as two rainbows nabbed it from the surface. At 2:30PM I observed two natural green drakes, as they fluttered on the surface in an attempt to escape the surface tension. 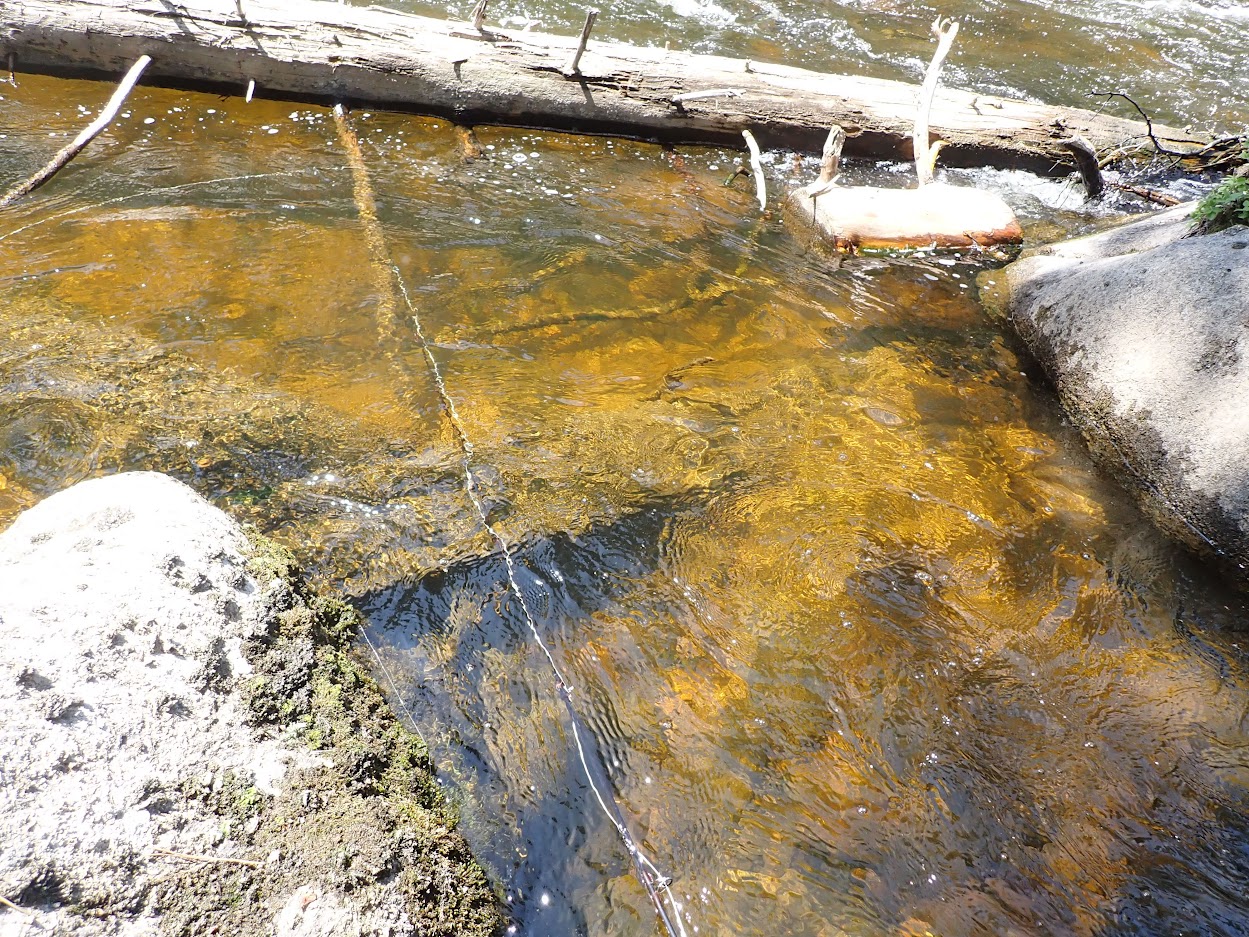 So Close I Nearly Dapped the Cast, but a Fish Materialized

By 3PM I became quite weary from scrambling around branches and over slippery rocks, and the mid-afternoon sun was scorching the creek and its surroundings including me. I reeled up my slack line, hooked my fly to the rod guide and began my hike back up the canyon to the car. Along the way I stopped at three separate shelf pools to test my skills, but a subtle refusal from a small fish was all I could muster, before I ascended the steep trail to the parking lot. I stopped five times during my climb to catch my breath and test for afib. By the time I arrived at the Santa Fe, my body was fatigued, and my layers were saturated with perspiration. The two gentlemen that I advised at the outset of my day were no longer present, and I was pleased to avoid their criticism, if they endured the rigorous climb. 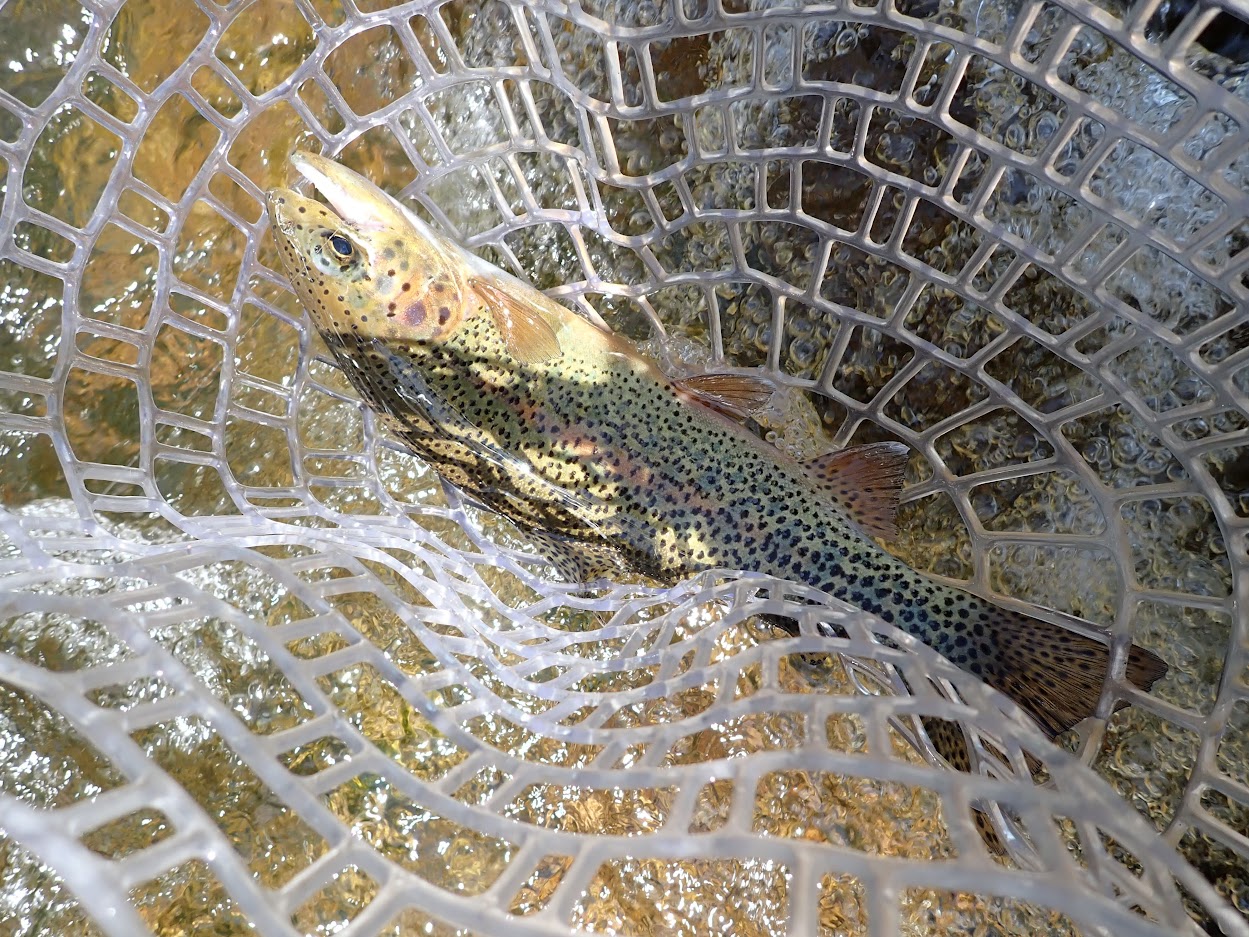 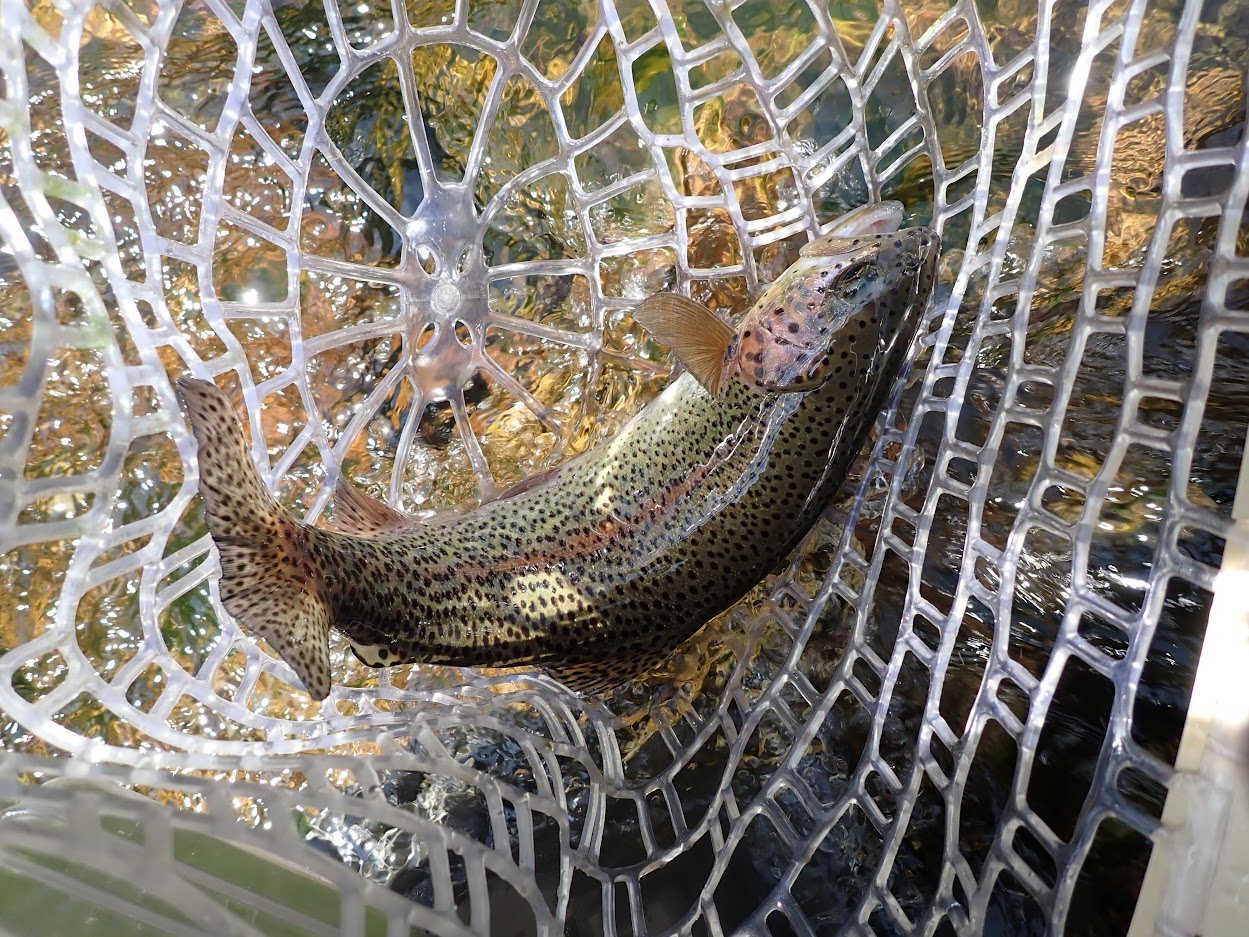 In retrospect Friday was a decent day for mid-August. The air temperature was much hotter, and I encountered many more anglers compared to my visit earlier in the week. The additional fishermen certainly stirred up the water and spooked more fish thus impacting my fish count. But all things considered, fourteen fish was reasonable, and each was a brilliant gem, while the size of the trout was above average for the South Boulder Creek fishery. If I eliminated the forty-one fish day on Tuesday from my mind and re-calibrated my expectations to a normal level, I realized that Friday was another fun experience during the summer of 2020. 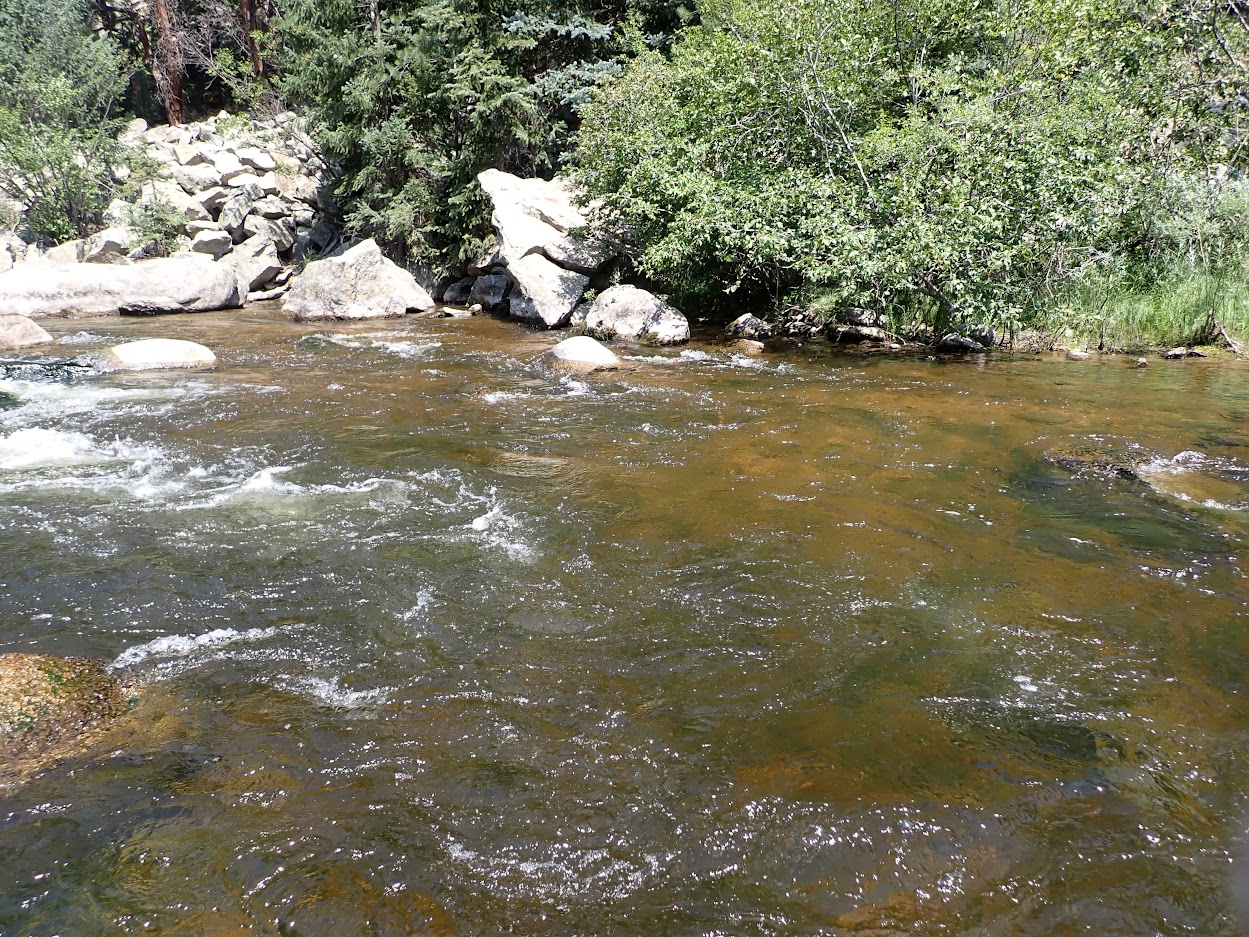 Where to Cast First?