Early August, western green drakes, and South Boulder Creek go together like pretzels and beer. Or at least that is what I thought, as I contemplated another fishing outing on August 13, 2021. The Denver Water managers seemed to have other ideas, as they sustained the flows at 180 CFS and above for all of July and early August. Imagine my excitement, when I checked the DWR graphs and learned that South Boulder Creek below Gross Reservoir was percolating along at 102 CFS. Game on. Were my expectations too high? Read on.

When I arrived at the kayak parking lot four other vehicles occupied spaces. The air temperature was 66 degrees, when I departed, and according to Weather Underground the high never exceeded seventy degrees, although it felt warmer with bright sunshine and very few clouds for most of my time on the water. I put together my Orvis Access four weight and began my descent of the steep trail to the South Boulder Creek canyon. As I ambled along the upper canyon, I passed five fishermen, and this accounted for all the cars. I was pleased with this circumstance, as it meant I would probably have the lower canyon area to myself. At one point another angler met up with me, since he parked at the Walker Ranch trailhead, but he cut to the stream quite a bit upstream of my chosen point of entry. Favorable weather, manageable flows and lack of competition portended a fine day of fly fishing. Would the trout and green drakes cooperate? 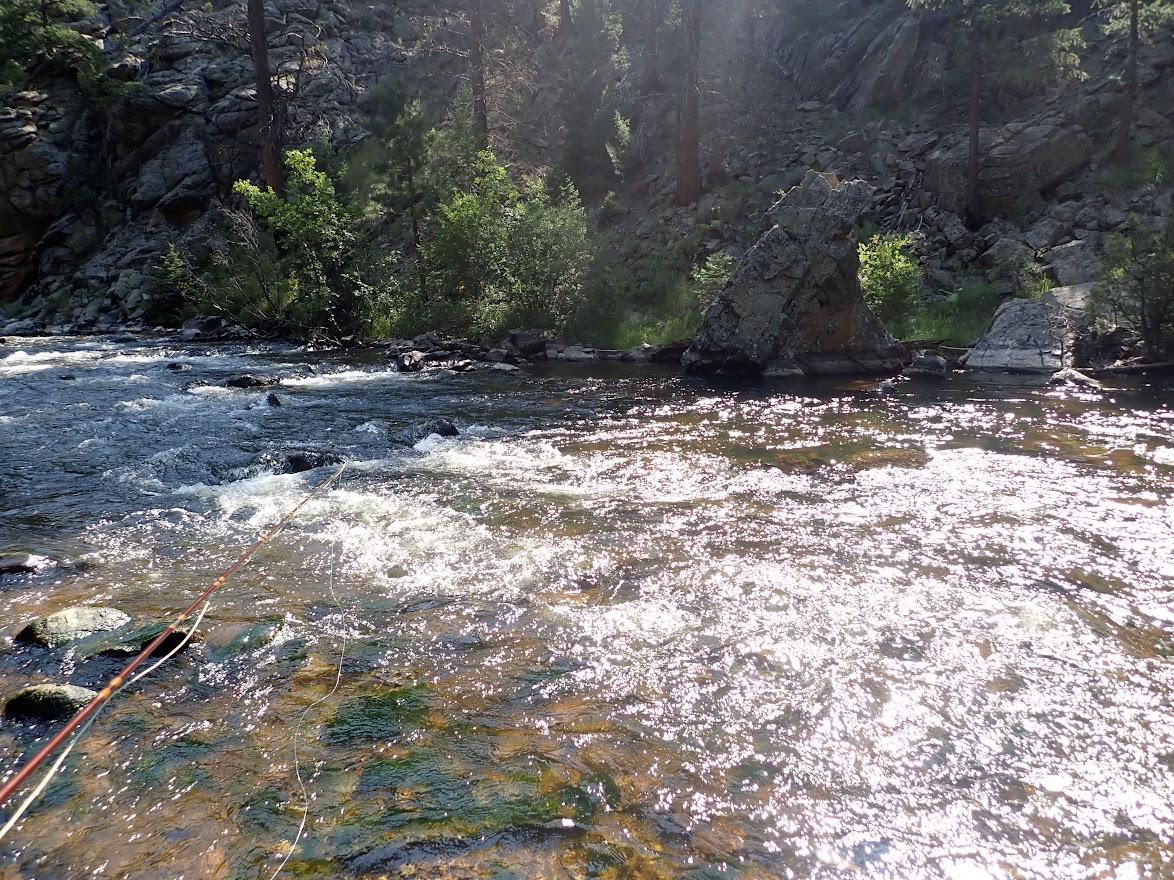 I began my day at 10:00AM with a solo parachute green drake, but after prospecting four or five quality pools, I was forced to acknowledge that there was nary a sign of fish. Apparently green drakes were not present long enough to create the hoped for intuitive response to an imitation outside the emergence period. Or perhaps they were late, and I would not meet them on August 13. My confidence was a bit shaken. I added a hippie stomper as my front fly and followed it with the parachute green drake, but once again I was greeted with no response from the fish. Concern crept into my outlook.

Perhaps the trout were keying on green drake or pale morning dun nymphs? I rigged my line with a buoyant tan pool toy hopper and added a prince nymph on a four foot dropper. Finally I connected with a pair of trout, but the catch rate lagged and refusals to the hopper became a commonplace occurrence. I added a salvation nymph below the prince to gain depth, and the pale morning dun nymph began to click, as I raised the fish count to seven by the time I sat on a rock to consume my standard lunch. I was catching fish at a decent rate, but the results required constant movement, and I was passing over some prime spots with no netted fish to show for my effort. 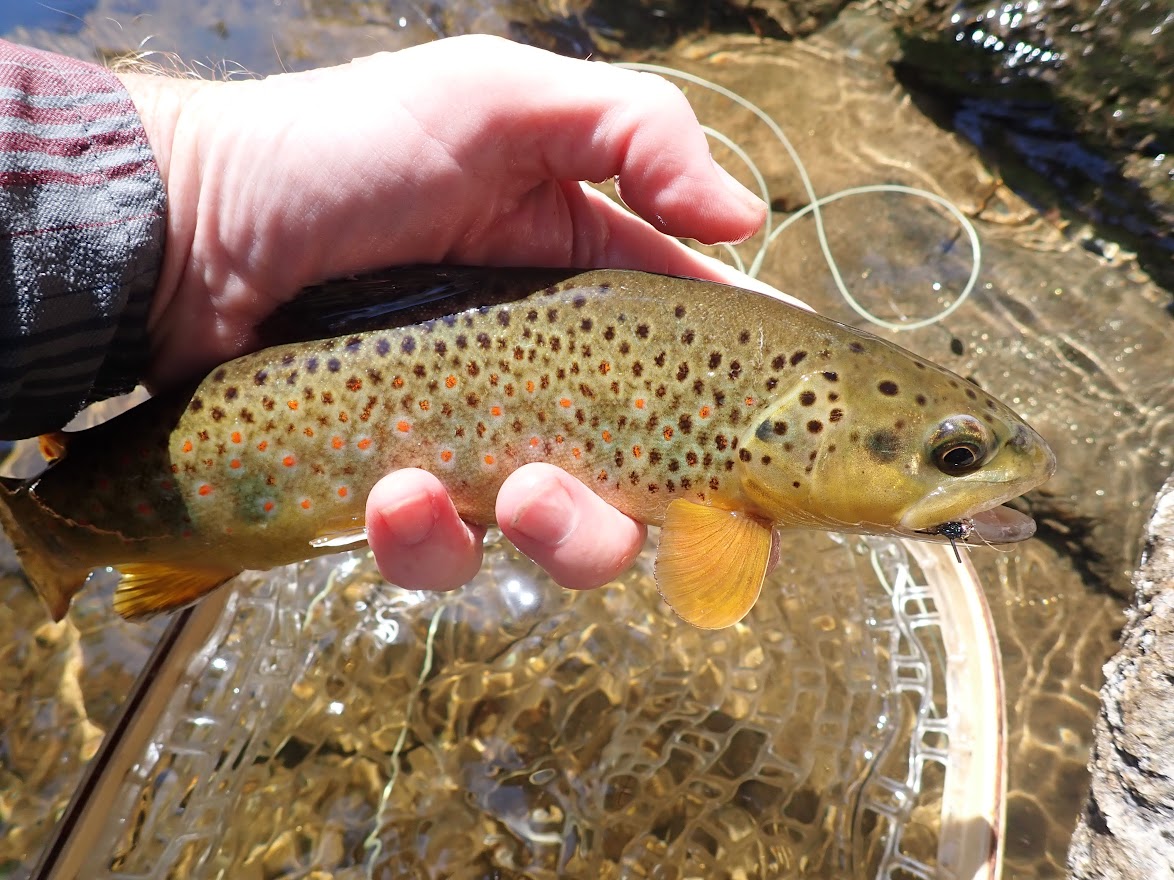 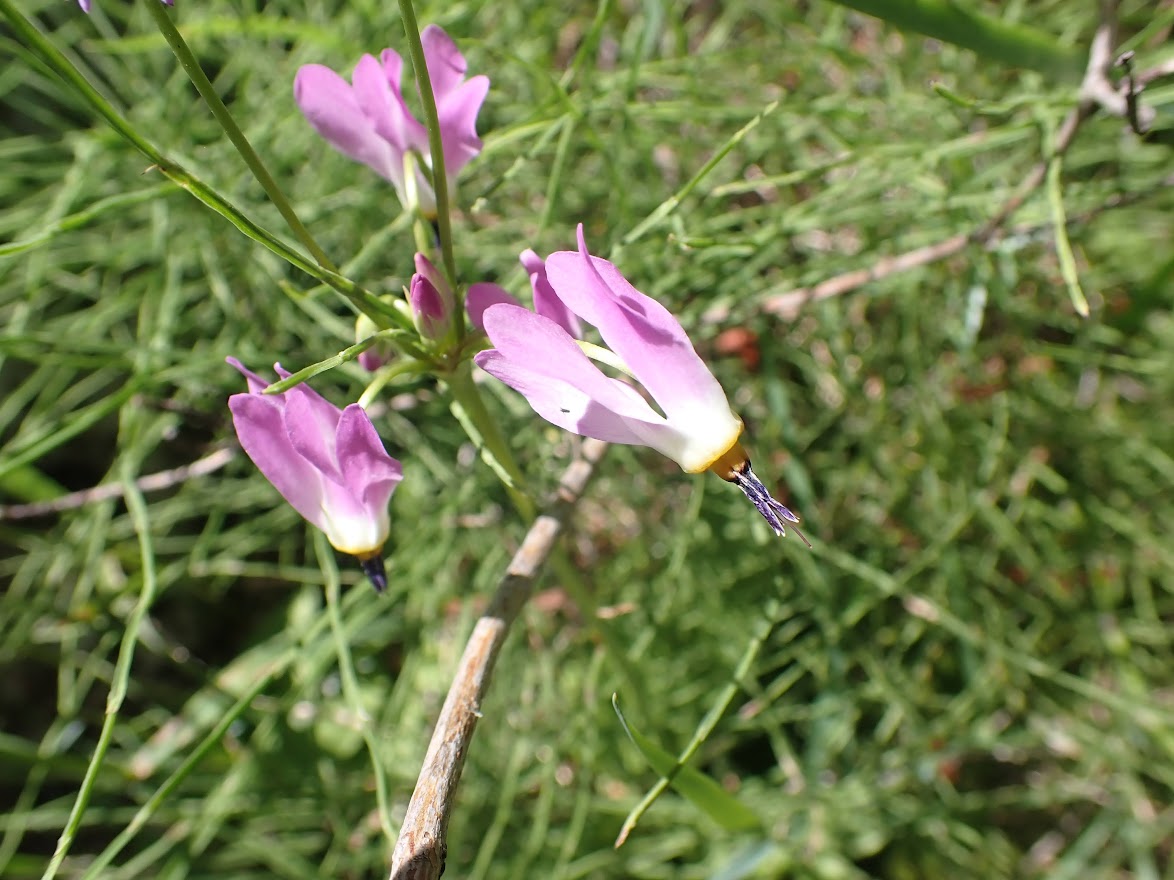 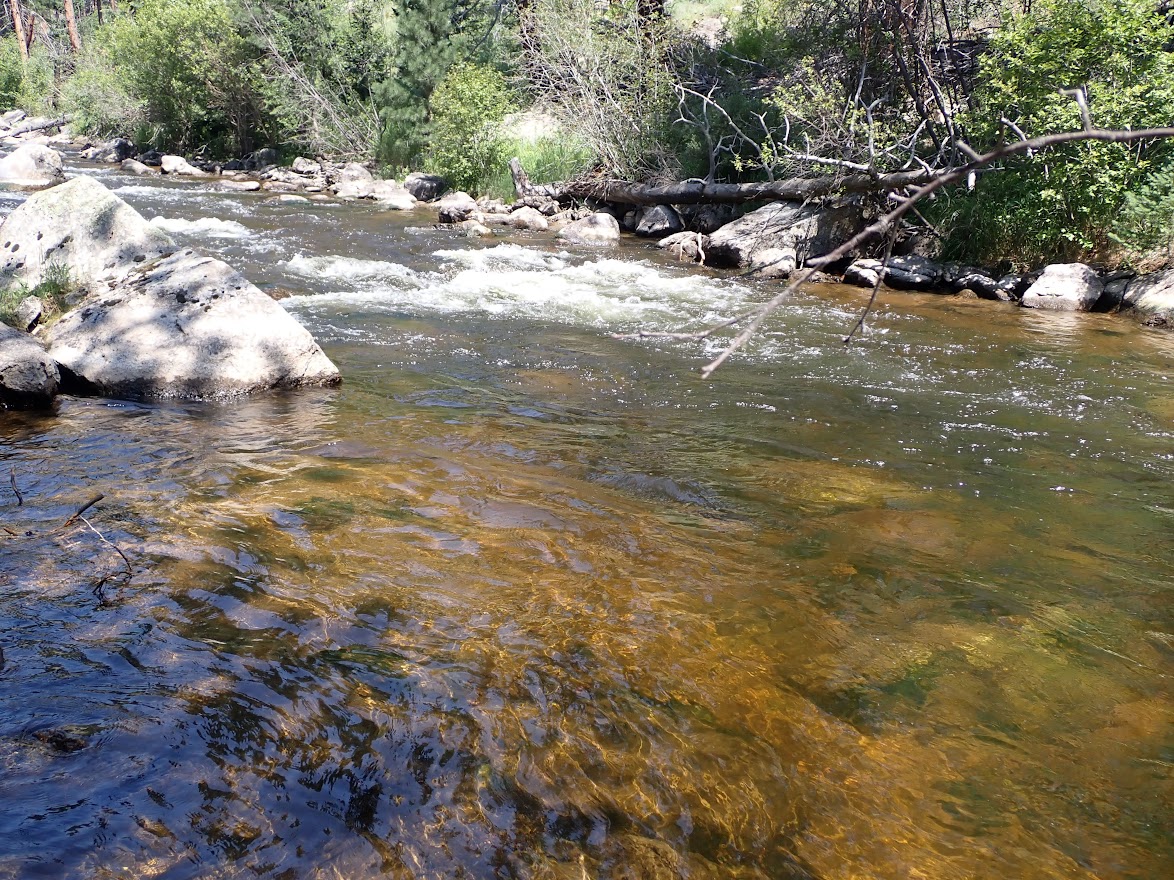 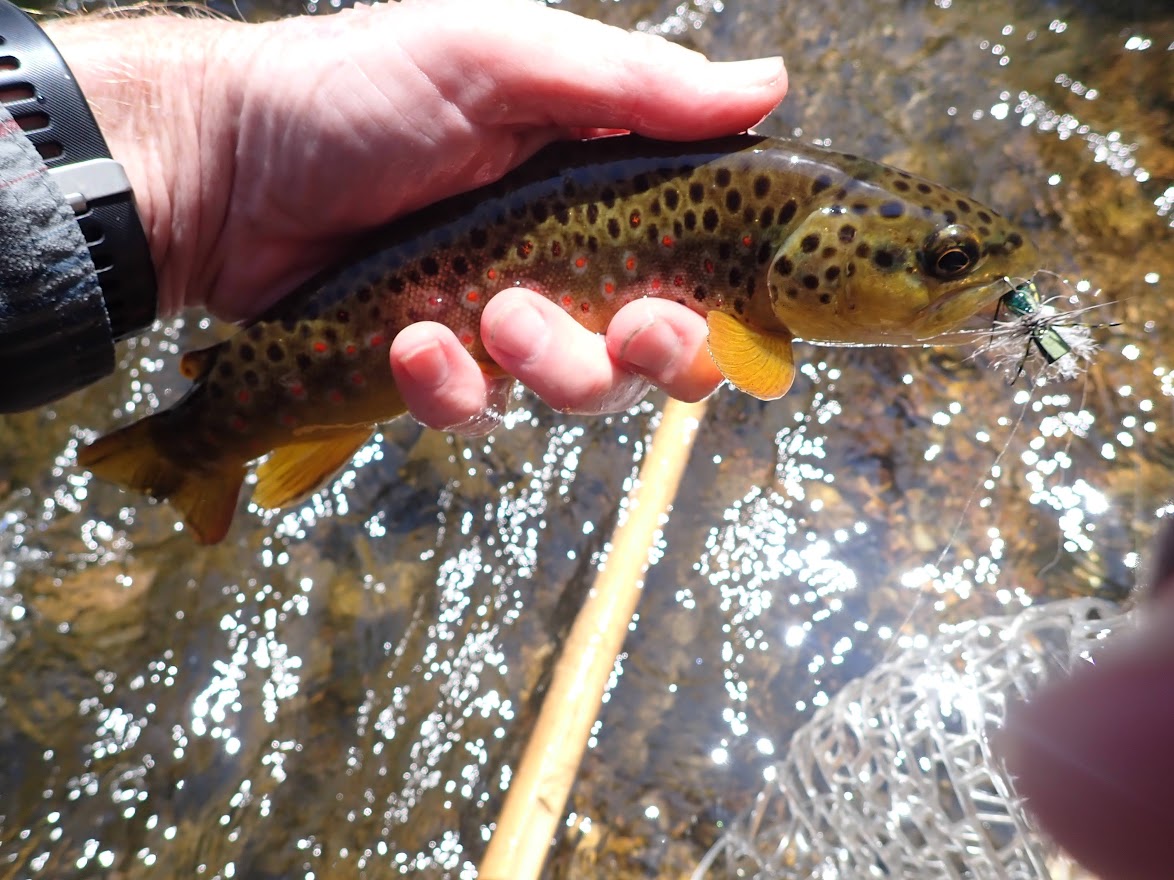 So Dark. Ate the Stomper

By 1:30 I began seeing a few natural green drakes in the air above the creek, and the hippie stomper began to generate an increased number of refusals, and a couple of fish actually ate the attractor dry fly. I decided it was time to convert to a green drake. I knotted a size 14 parachute green drake to my line, and the fun escalated. In a testimony to how durable my fly was, I landed twenty-two trout, before I deemed it too ragged to continue presenting. I replaced it with another paradrake, but this one had brown microfibet tails instead of moose mane, and the catch rate lagged significantly. This change coincided with the end of the hatch, so perhaps it was the insect cycle and not the fly that caused the slow down; however, my observation told me that the moose mane version looked more like a natural. I plan to sort through my inventory of parachute green drakes to preferentially stock the moose mane versions. 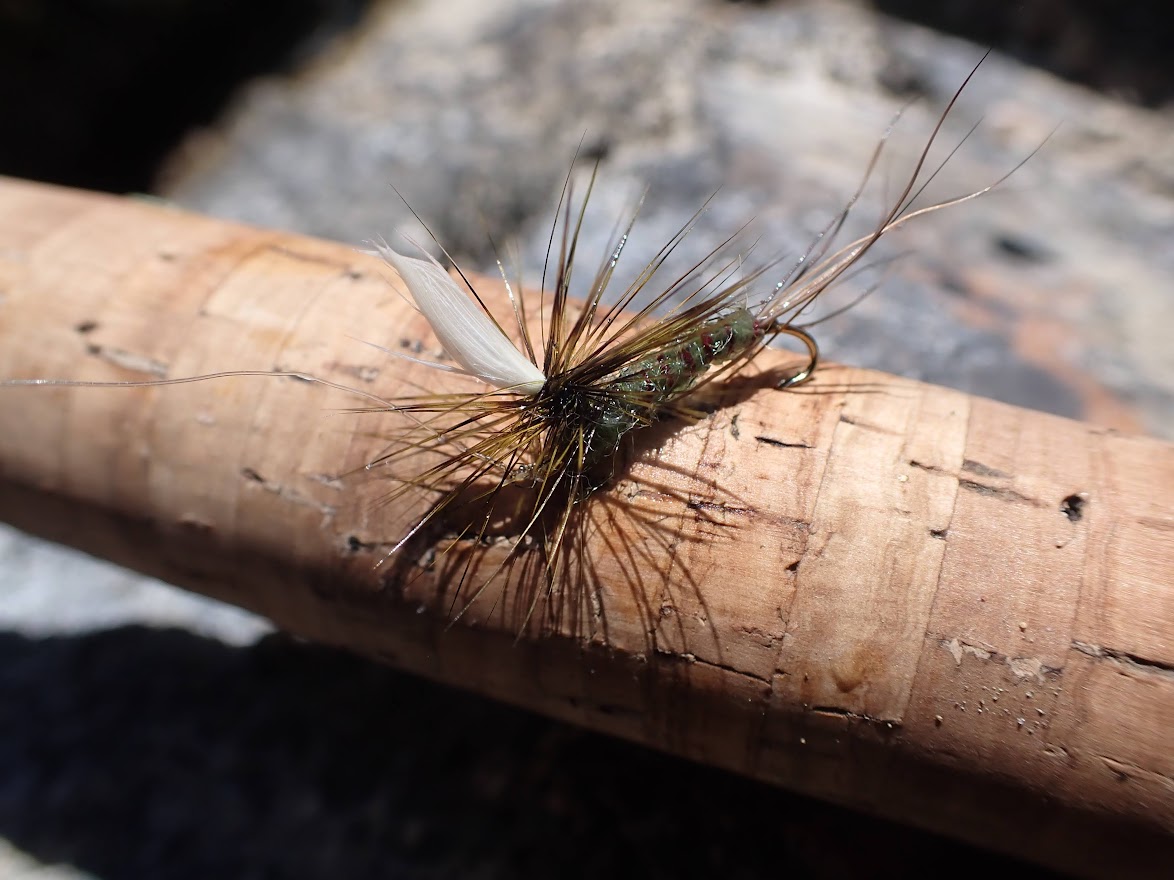 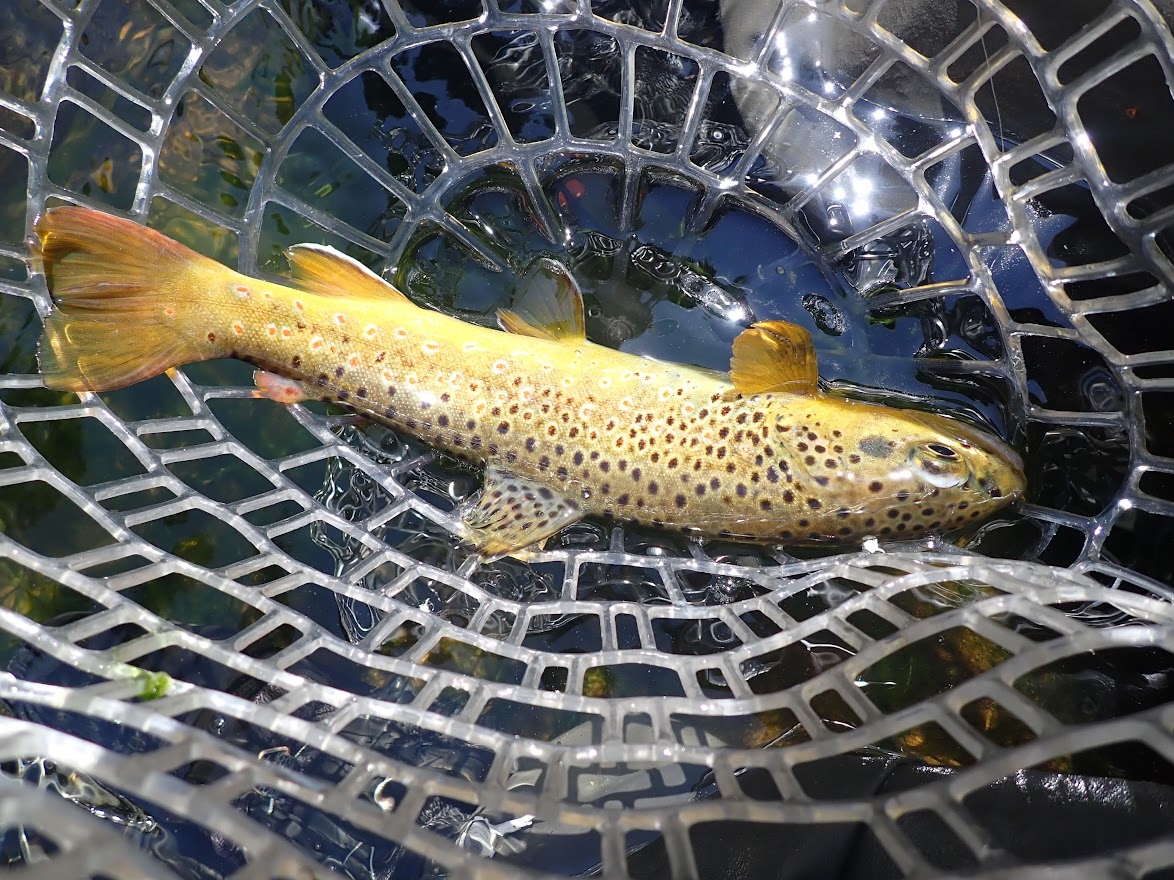 Between 1:30PM and 3:00PM I was supremely confident in the green drake imitation. All the prime locations produced fish, and the browns and infrequent rainbows inhaled the impostor with confidence. This was the torrid green drake fishing that I recalled from previous Augusts, and I was thrilled to be the benefactor of the sparse emergence. 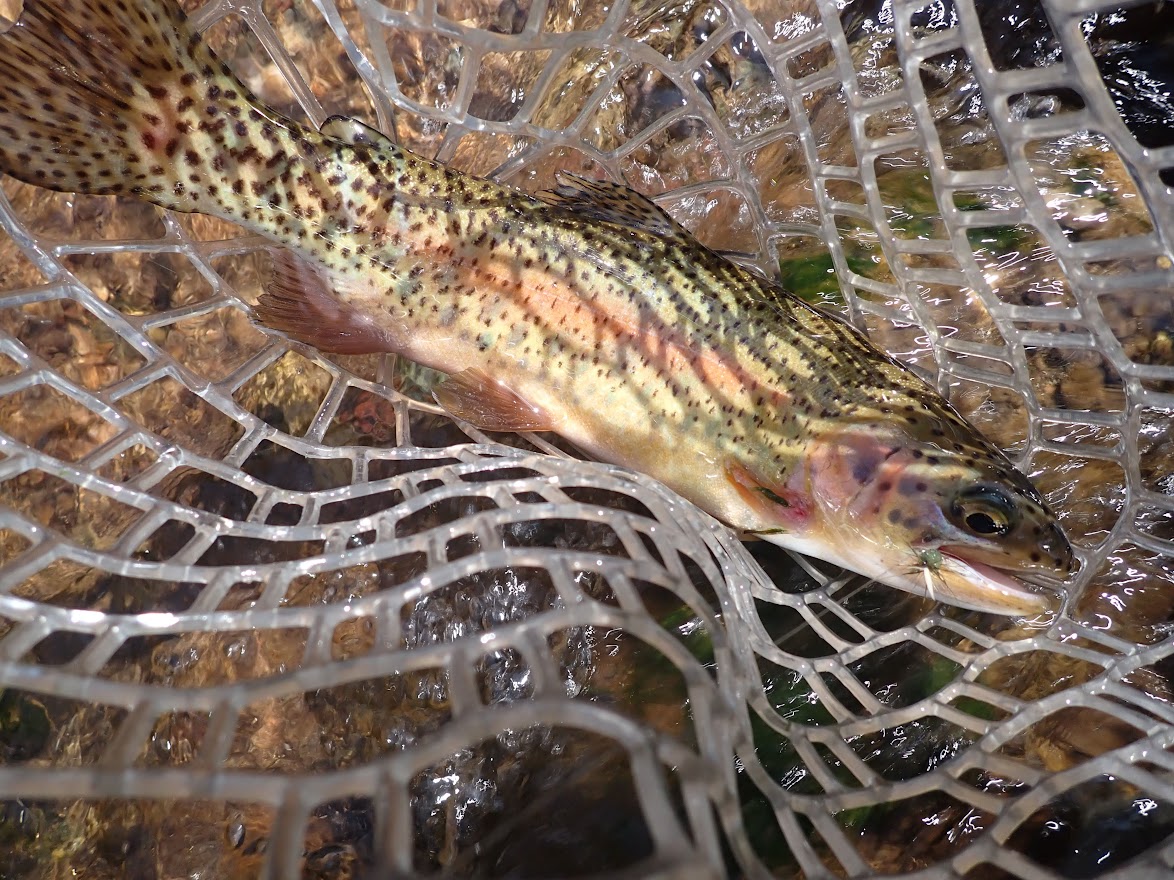 Most of the forty-two landed trout were in the seven to eleven inch range, but I also netted a thirteen inch rainbow and a few twelve inch brown trout. The fish were all wild gems with brilliant and vivid coloration. In short, I had a blast working my way upstream and prospecting with the confidence-building green drake. Hopefully the flows will remain near the current level or slightly lower, and I plan to take advantage with another trip or two next week. I discovered that early August, western green drakes, and South Boulder Creek do, in fact, go together like beer and pretzels. While in a celebratory mood, I munched some pretzels and sipped a Red Bull on my drive home. Beer is taboo while driving.