On the same trip to the Conejos River when I purchased western green drakes I also purchased some dark beadhead nymphs with iridescent backs and small rubber legs. I never asked what they were called so I’ve named them shimmering pheasant tails. These nymphs were quite effective on the upper Conejos River on my first day of fishing there. 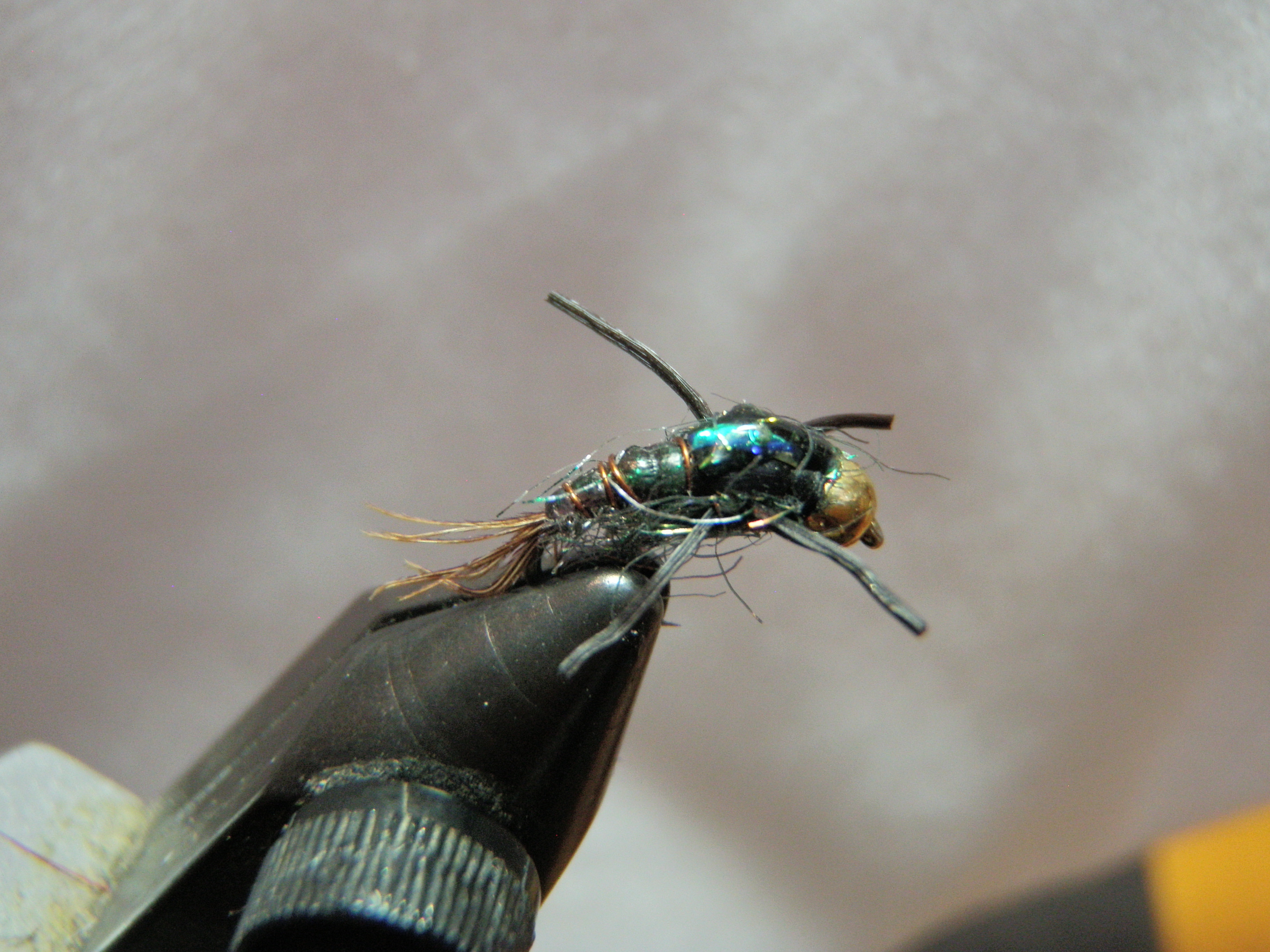 I used the nymphs in a dropper configuration behind a Chernobyl ant and caught a lot of fish along the edge.

I lost quite a few of the purchased flies, so I made sure to maintain at least one in my foam pocket to use as a model when I attempted to replicate. In fact I took the sample version with me on a trip to Charlie’s Fly Box in Old Arvada and asked the store salesperson to help me purchase the materials required to tie a shimmering pheasant tail. He did just that, and I returned home with two colors of ice dub, silly legs and a sheet of flash back black.

I gathered all the materials together and placed the purchased shimmering nymph on the magnet beneath my vise and began my first fly. First I threaded the bead over the hook point and slid it to the eye of the hook. Next I attached thread and wrapped it to just beyond the hook bend. I tied in a short stubby tail using pheasant body feather fibers. This was the only natural material in the entire fly. Next came a section of fine copper wire and then a strand of pearl flashabou followed by a thin strip of the flash back black. I opened the package of silver holographic ice dub next and observed that it appeared to be a massive clump of tinsel. How does one apply this metallic stuff? I took a small amount and twirled it on to the thread and miraculously it adhered just like natural dubbing. 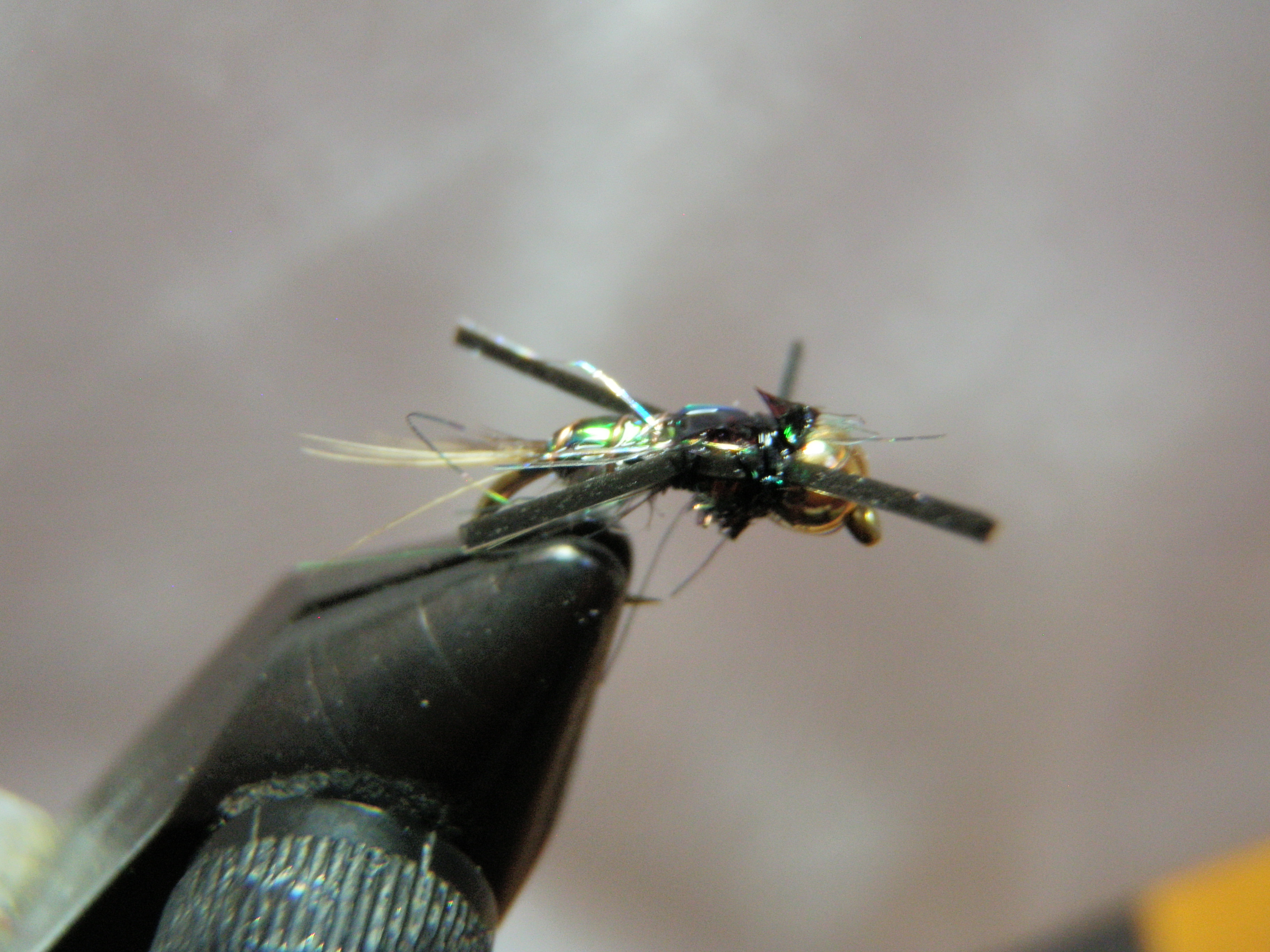 I pulled the flash back black up over the dubbed abdomen and then the pearl flashabou as well and then spiral wrapped the copper wire to the front of the abdomen. Next I folded the flashabou and flash back toward the rear over the abdomen and locked it there with a few turns of thread. Now for the thorax I grabbed the packet of black peacock ice dub and spun it on to my thread. I wrapped the black peacock from the front of the abdomen to behind the bead and then cut two small sections of black silly legs and mounted them on both sides of the thorax. Finally I pulled the flash back and flashabou forward over the top of the thorax dubbing and tied down and whip finished. I trimmed the legs to be even on both sides and as a last step coated the head threads and the entire top of the fly with Sally Hanson Hard As Nails. 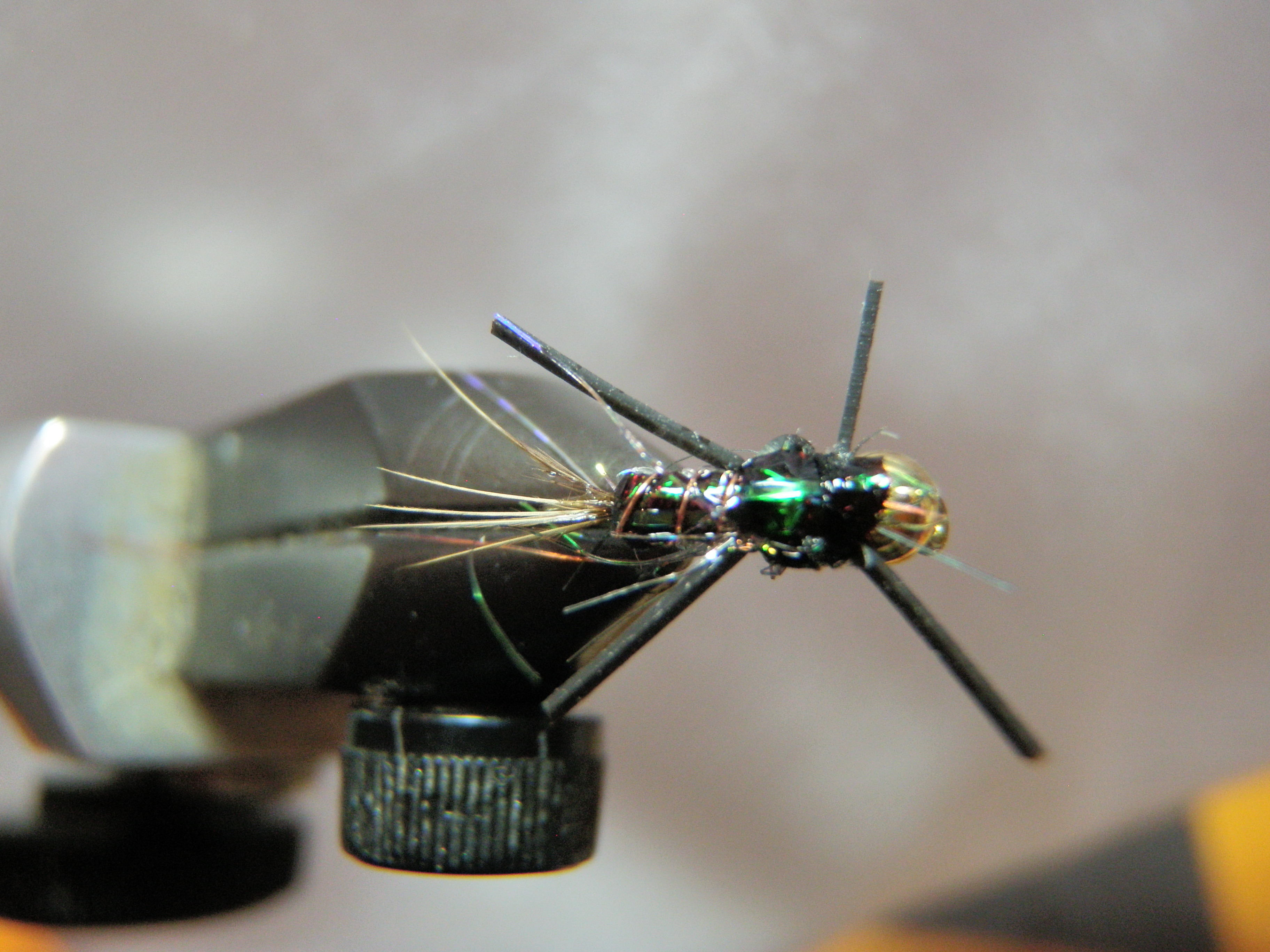 I removed the fly and placed it next to the purchased model and concluded that I’d produced a fairly close replica. This is another new creation I am anxious to test in 2012.