Day 4 of our road trip to Arizona took us from Flagstaff to Tucson. After our Thursday lodging scare, Jane went online and reserved a room at the Baymont Inn and Suites near the Tucson Airport. We were set with a hotel for the weekend, and we were relieved to avoid concerns on that front.

One of the goals of our trip was to attend several spring training baseball games, and we made that happen on Friday. Phoenix was along our path to Tucson, so we decided to view the Los Angeles Dodgers vs. the Arizona Diamondbacks at Salt River Fields at Talking Stick. The Rockies and Diamondbacks share the same spring training complex at Talking Stick; however, when I reviewed the schedule, I realized that the Rockies games took place over the weekend while we stayed in Tucson. Tucson is two hours from Phoenix, and we did not relish the thought of a four hour round trip to see the Rockies.

I saw the Salt River complex in 2011, when I spent a long weekend in Phoenix with Dan, but Jane missed out on that trip, and she hoped to see the modern facility. During my schedule review, I noticed that the Dodgers played the Diamondbacks in a day game on Friday at Salt River Fields, so we made it our destination and programmed the iPhone app to guide us there. 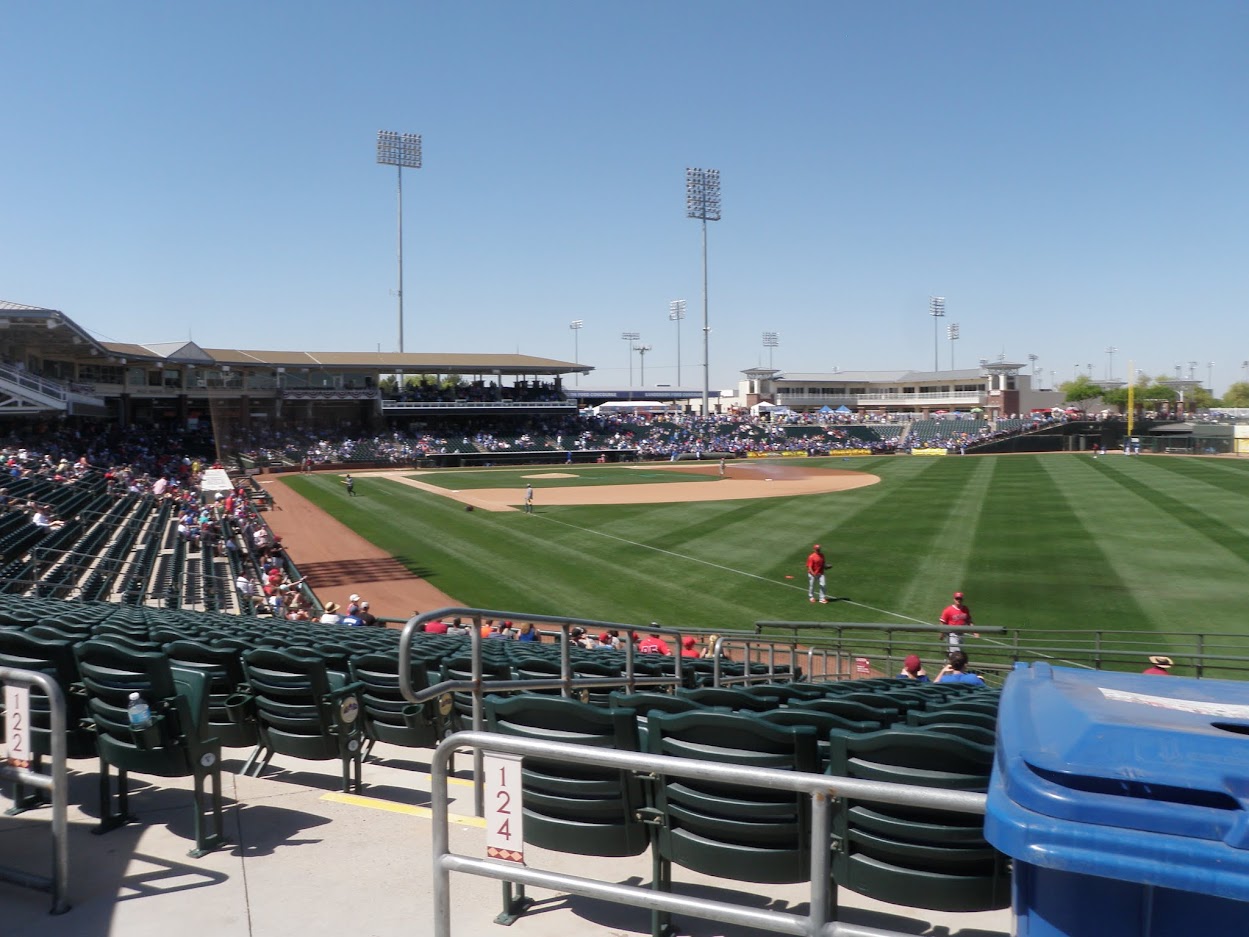 The View from RF

In theory this was a fantastic plan, but in reality it did not happen. We exited Interstate 17 and merged on to the 101 loop, but when we exited near the ballpark, we noticed several signs that informed us that the game was sold out. What was going on? First we had difficulty finding lodging, and now a spring training game was sold out. Needless to say we were disappointed with our foiled plan, so we pulled into a dirt turnout near the stadium parking lot to consider our options. I reopened the Cactus League schedule and scanned the afternoon games. The Angels vs the world champion Kansas City Royals stood out as an interesting option, and the ballpark was on the northwest side of Phoenix in a suburb called Surprise. We reset the map app and made our way back across town to the Royals spring home. 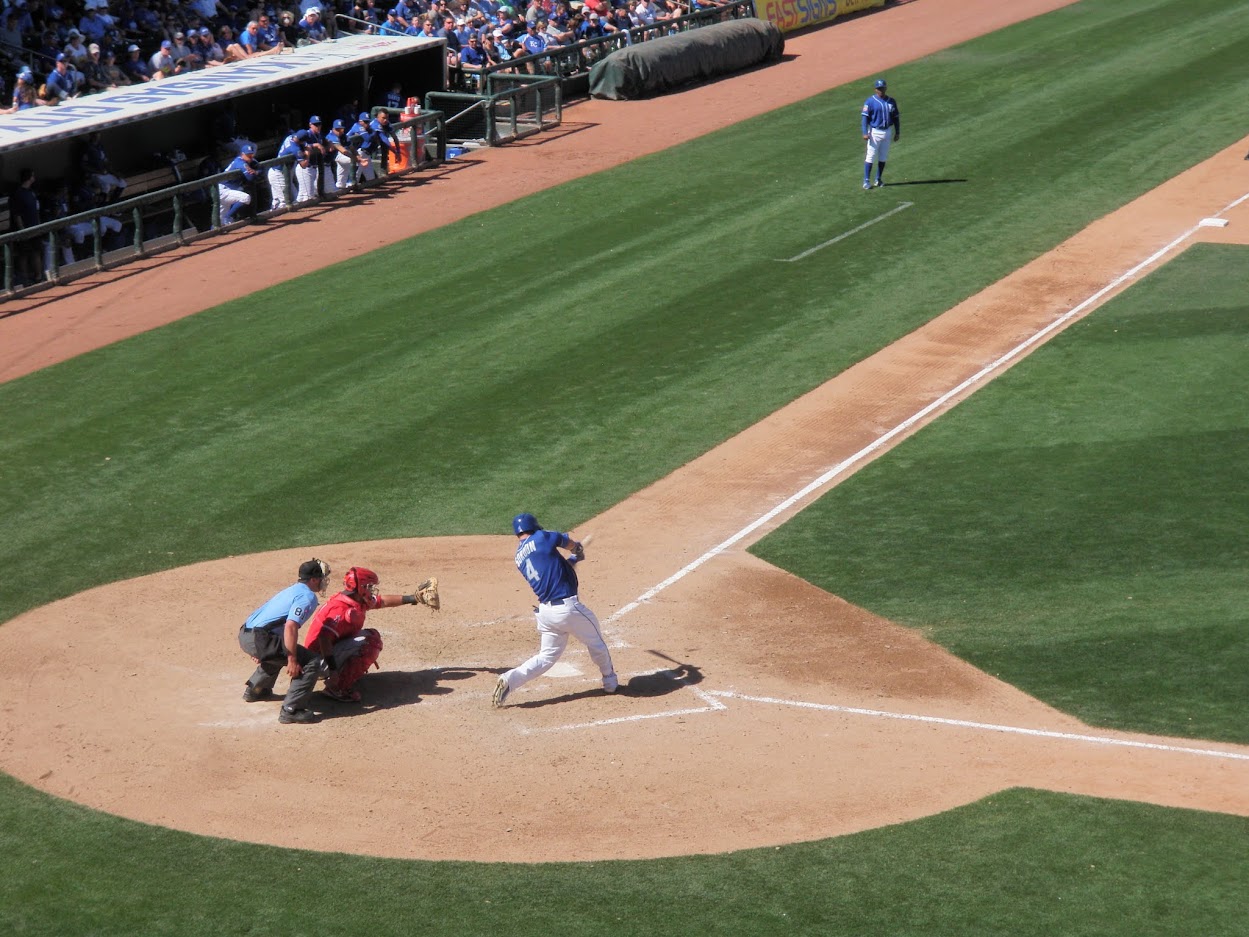 This Resulted in a Fly Ball

The field at Surprise was not as new and modern as Salt River, but it was very well maintained and provided intimate seating on a bright sunny day with many enthusiastic fans in attendance. It was Cactus League baseball, and we enjoyed every minute of it. With my Phillies and Rockies struggling to assemble competitive teams, I adopted the Royals as an American League favorite. I love their style of play which features strong relief, excellent defense, contact hitting and speed on the basepaths. Jane and I purchased Italian sausage sandwiches for lunch and then escaped to the shade with temperatures spiking in the high eighties while the Royals trounced the Angels. Surprise field was the relaxing pleasant atmosphere that we yearned for when we made our plans to visit Arizona. 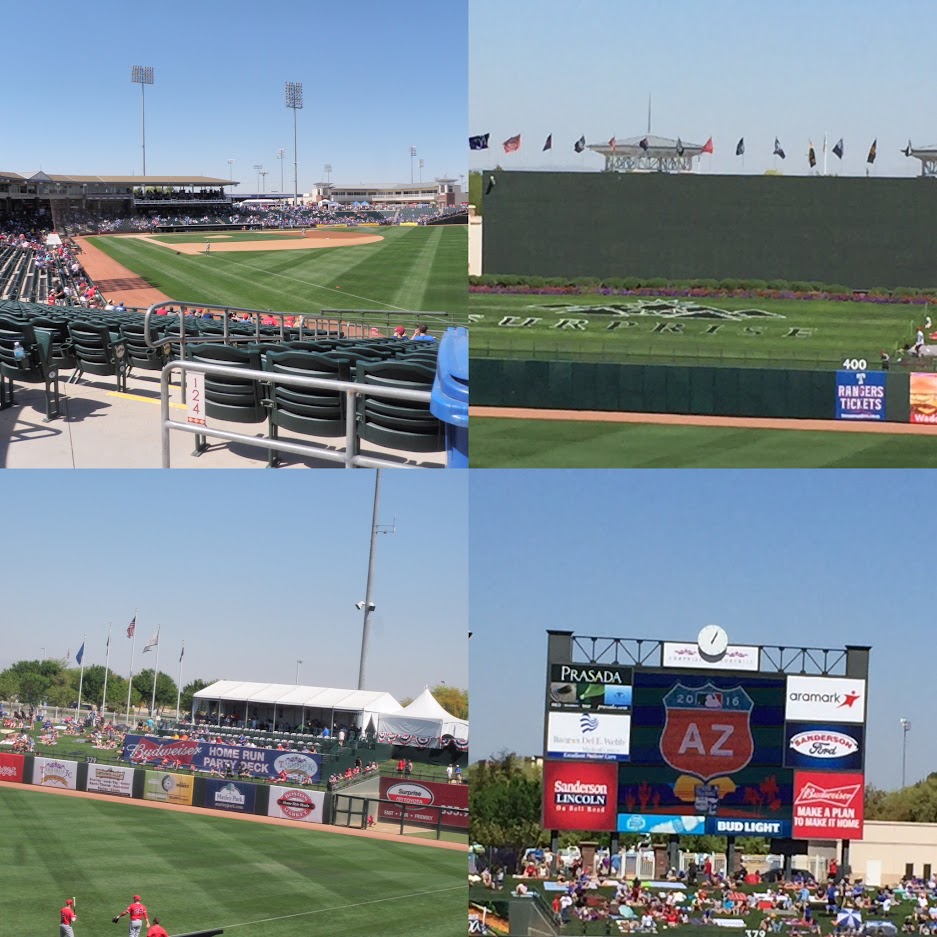 After the game ended we drove west until we found a road that skirted the perimeter of Phoenix. We headed south and mostly avoided rush hour traffic and then continued for another two hours to Tucson. We arrived around dinner time, and since we had a room reserved, we headed directly to Barrios Brewing Co. on the east side of Tucson. I found this brew pub when I searched my phone. Jane and I each enjoyed a craft brew and inhaled some tasty casual fare and then continued on to the Baymont Inn. We could now unpack a bit and settle in for a weekend in Tucson.