On my return drive from Carbondale on Tuesday I encountered heavy wet snow from the Eisenhower Tunnel until Genesee before the long steep descent to Denver. Fortunately the snow accumulated on the ground but not on Interstate 70. At my home the precipitation switched to rain, and I heard the steady pounding throughout the night. Wednesday was an open day, and I hoped to take advantage with another fly fishing outing, but the weather remained uncooperative.

I opened my trusty Weather Underground app and noticed that the rain was supposed to end around 10AM, and the air temperature was projected to gradually warm to the low sixties in the afternoon. I immediately shifted my attention to Pine, CO, a small town near Pine Valley Ranch Park, and the by-hour line depicted clearing and temperatures in the mid-fifties to low sixties by late afternoon. I decided to make the 45 minute drive to Pine Valley Ranch Park on Wednesday afternoon.

I consumed my lunch and threw my gear in the car and departed by 1:00PM. Heavy, low clouds remained in the sky, as I progressed southwest on US 285, and dense fog became a new challenge between the foothills and Conifer. Was Weather Underground off base, and was I wasting my time and fuel on a fly fishing boondoggle? I was relieved, when I crested a hill near the turn off for Staunton State Park, and I noticed blue skies and sporadic sunshine. By the time I arrived at the Pine Valley Ranch parking lot the temperature registered 59 degrees, and I was a very happy camper.

I quickly pulled on my waders and assembled my Sage four weight and ambled along the short trail to Pine Lake. I skirted the north side of the lake in order to investigate the narrow lagoon on the west side, but after a thorough inspection I concluded that no trout were present. I experienced quite a bit of success in the canal-like inlet during two visits in 2021. I continued around the west end of the lake and then paused on the south side, where a large log angled into the water. 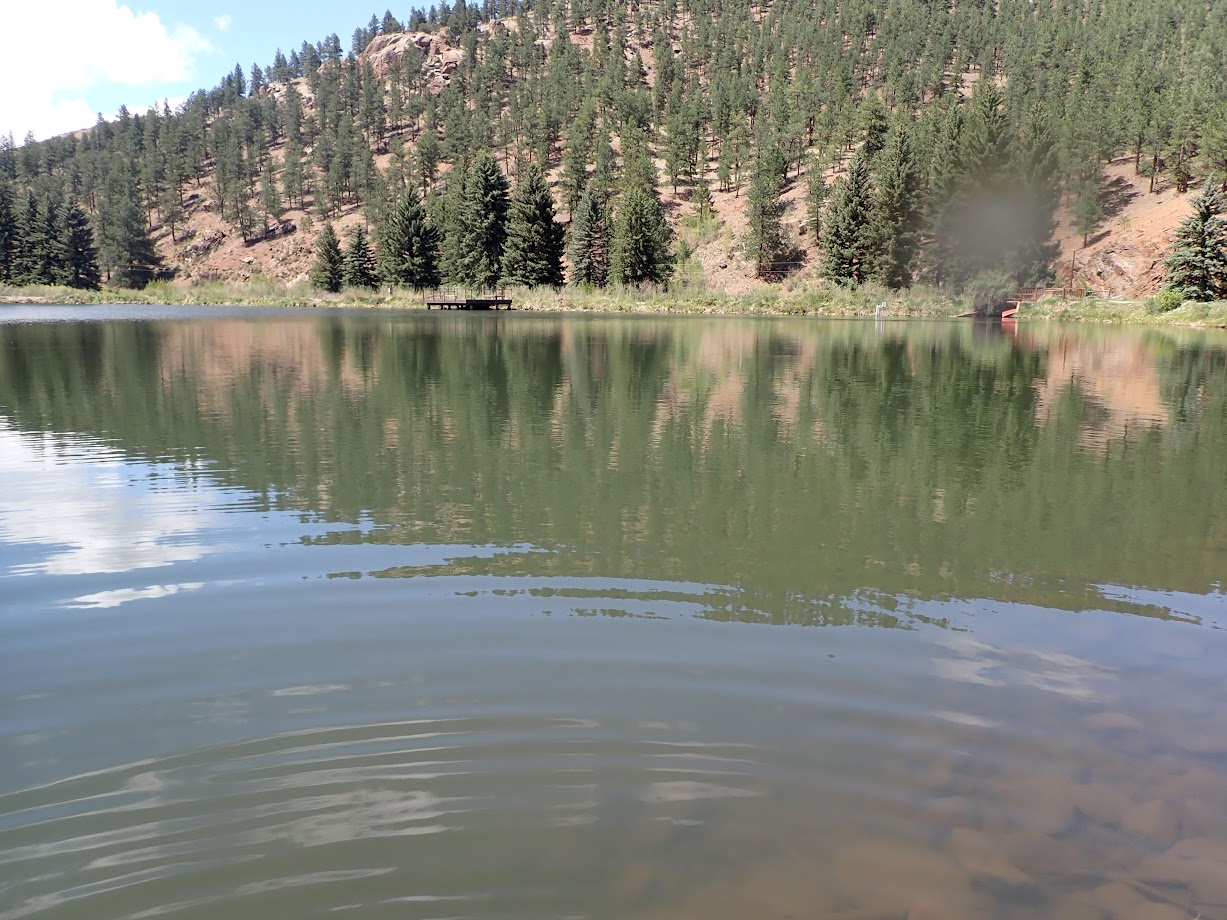 I knotted a silver body hippie stomper to my line and then added a salvation nymph, and I began shooting thirty to forty foot casts into the lake. The wind kicked up and ruffled the surface, and after ten casts I sensed futility, so I continued to circle the lake and stopped in the southeast corner. I stared in the water and observed quite a school of fish, as they darted about near the shoreline. I was unconvinced that these were trout, but I did spend fifteen minutes attempting to catch one in order to identify the species. It never happened. I added a pink San Juan worm, but this imitation bait was ignored in the same manner as the salvation nymph. I bent over and stared at one of the larger fish, and it was obviously not a trout, so I moved along the shoreline to the eastern side of Pine Lake.

During my time on the stillwater I was able to observe rises from time to time, but the surface feeding was extremely sporadic. I was feeling rather overwhelmed with the prospect of blind casting to the large body of water, but I knew the lake had been stocked the previous week, and I was certain that not all the fish were harvested. 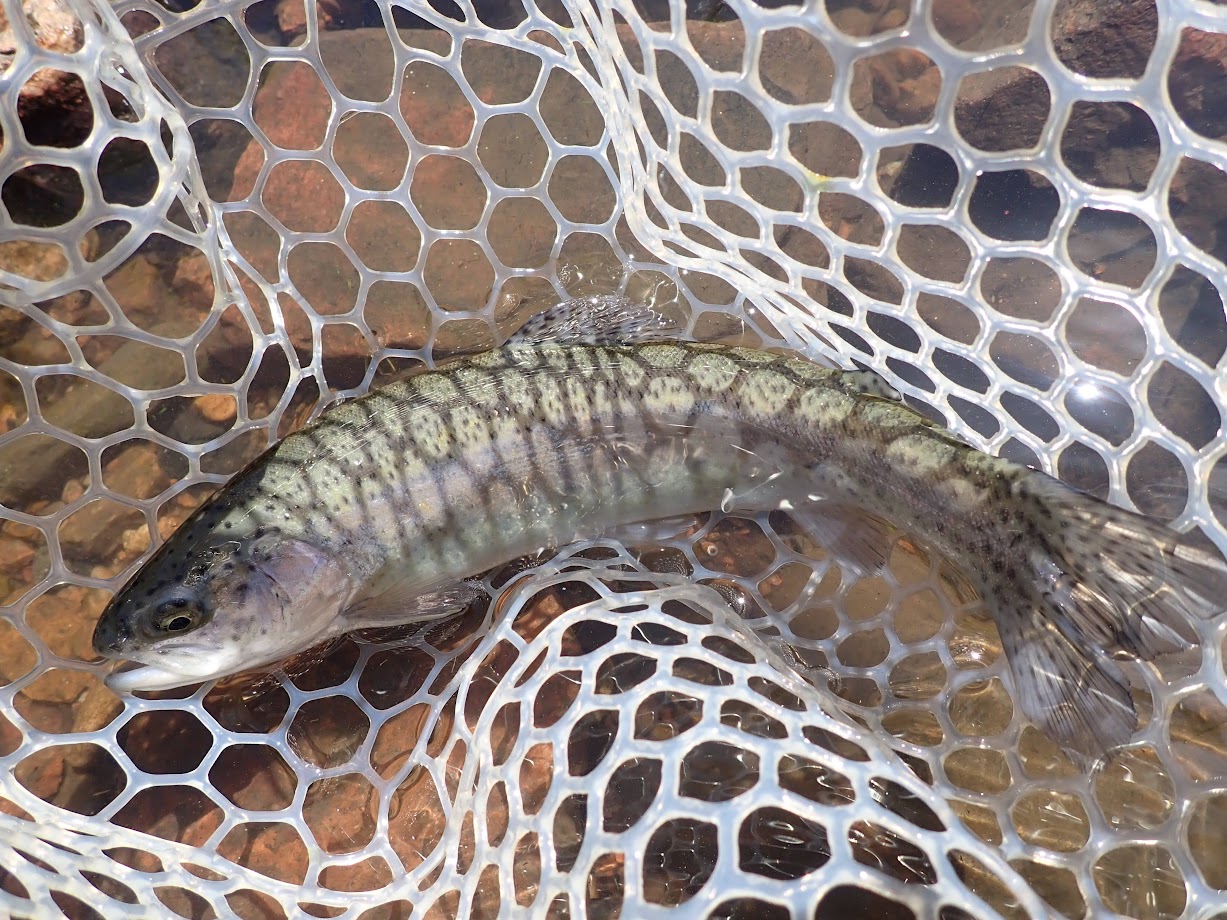 Put Up a Fight

Using the theory that the sporadic rises featured emerging midges, I swapped the San Juan worm for a zebra midge. I executed a prospecting forty foot cast to an area to the right of one of the handicapped casting platforms, and after a brief rest I began making short strips. i was shocked when a bulge appeared behind the leading hippie stomper, and I set the hook and connected with a very strong and stubborn stocker rainbow. Eventually I guided the rankled trout into my net. Two casts later the same scenario played out, and I landed a second albeit smaller stocker rainbow. My confidence surged and my enthusiasm was renewed. 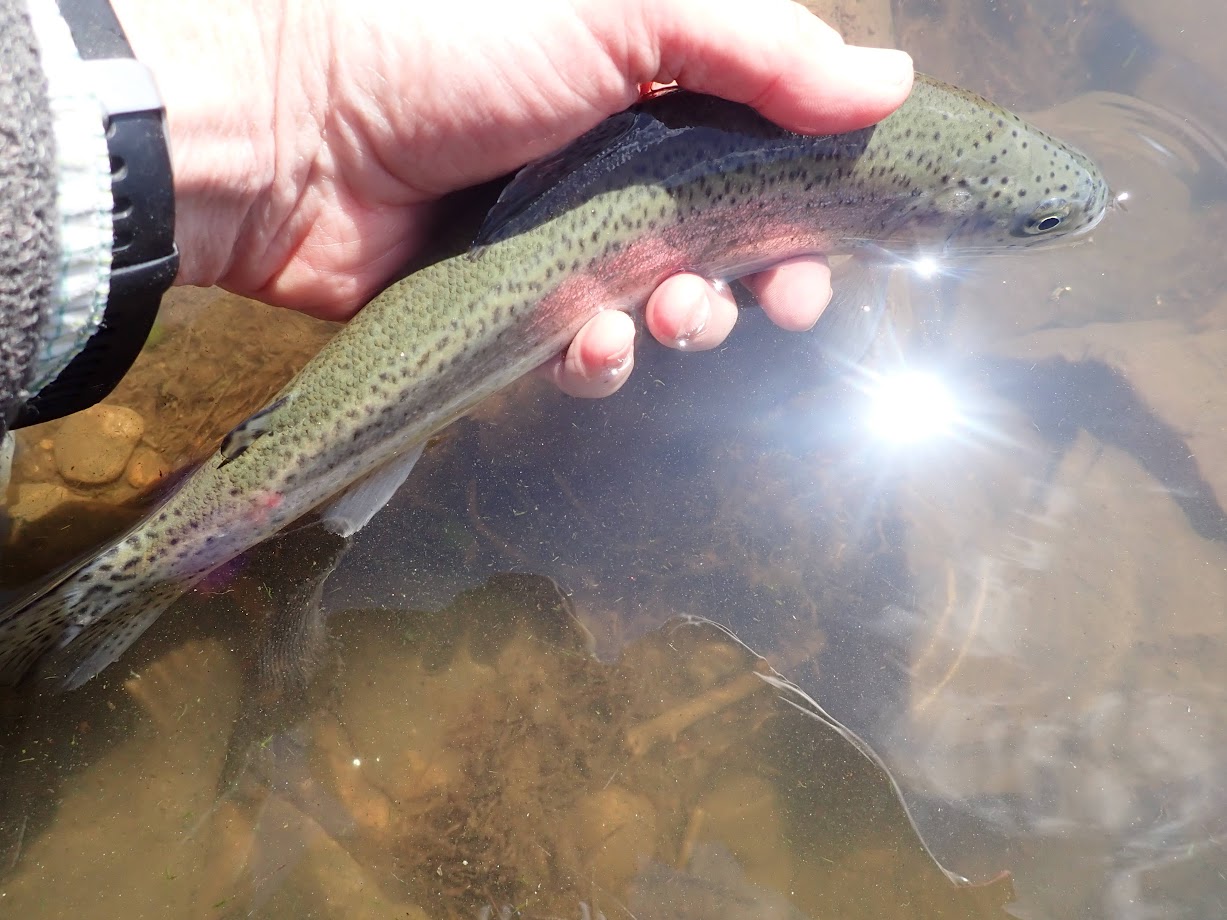 Another dry spell ensued, so I moved farther north along the east bank, and I began spraying thirty to forty foot casts toward the drop off in the lake, but my previous good fortune deserted me. Quite a bit of time elapsed before a random rise appeared no more that fifteen feet out from the shore between me and the handicapped platform. I pivoted my body and fired a cast to the space, where the trout fed, and I was surprised when a tug occurred, and I set the hook and landed another rainbow.

I slid down the shoreline another ten yards, and I slapped the flies down twenty feet from shore, as I prepared to make a longer cast. Again I was shocked, when an aggressive trout attacked the hippie stomper, and I quickly reacted with a hook set. This trout felt a bit larger than the two small versions that I landed earlier, but after a twenty second tussle, the finned creature on the end of my line escaped.

This would be my last bit of action for the day. I worked my way to the northeast corner and then reversed direction and moved along the southern shoreline, but the magic was gone. The number of surface rises shrank even more, and I cycled through various midge pupa and larva patterns, but I was mired in an extended slump. At 4:30 I placed my hook in the rod guide and ambled back to the car. 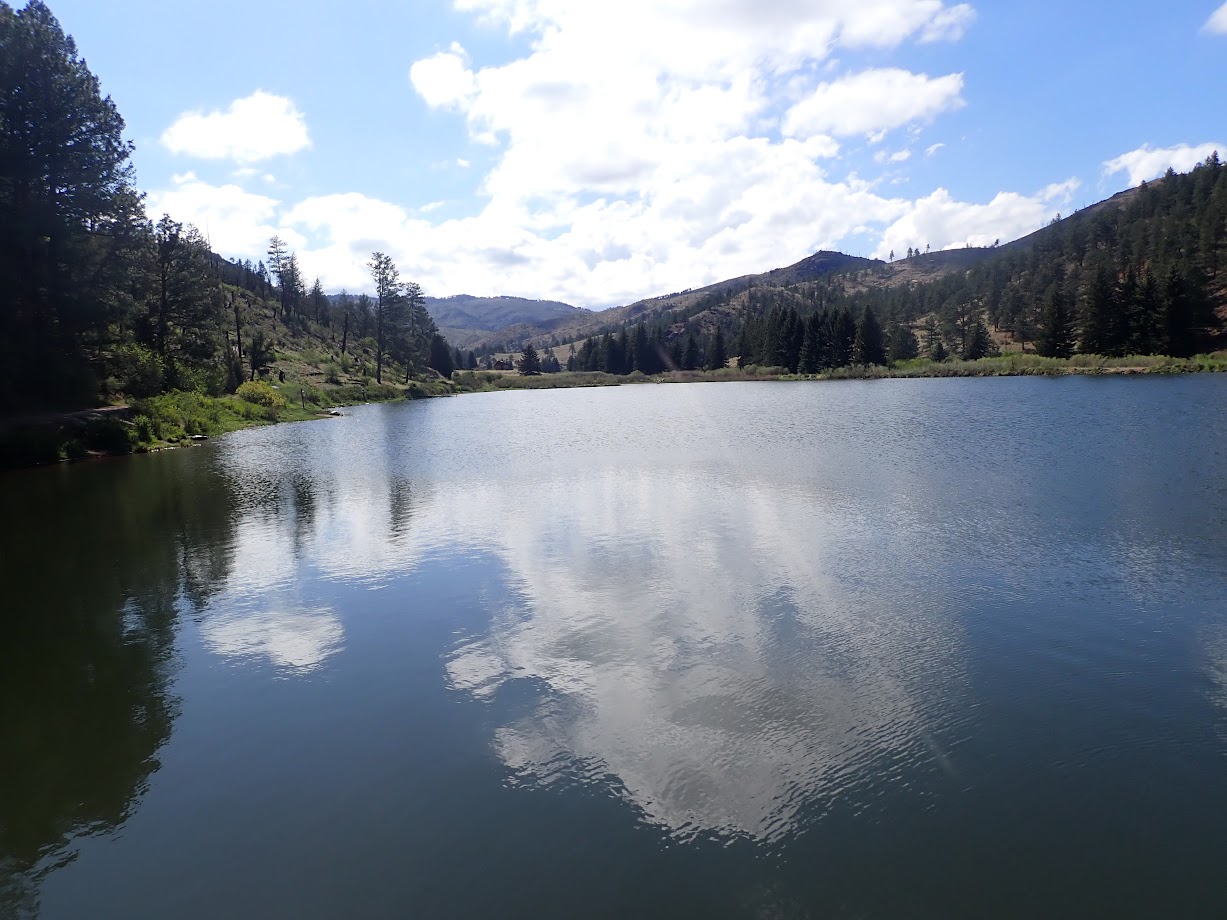 Three fish in two hours is not very exciting, but I managed to avoid a skunking, and I enjoyed some very pleasant spring weather after the wintry blast of the morning. I essentially had the entire lake to myself, although two young anglers appeared and fished across the way from me for the last thirty minutes. I suspect that warmer weather will encourage more aquatic insect activity, and this in turn will spur the stocked trout to be more aggressive with their surface feeding. I will hopefully return before the run off ends during 2022.