Location: Between Trappers Lake and the North Fork Campground

I departed Denver at 8:05AM on Wednesday morning, September 19, and arrived at my intended fishing destination along the North Fork of the White River by 12:30PM. As a result of my zeal to get on the stream, I hastily consumed my small lunch and assembled my Orvis Access four weight, and a short hike on a trail delivered me to a spot next to the tumbling North Fork by 1PM. 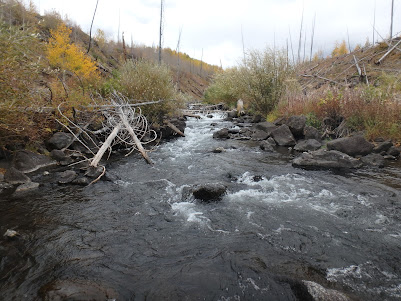 The temperature was around 64 degrees and the sky was overcast, and the cloud cover intensified as the day progressed. By 3PM I became quite chilled, so I pulled on my raincoat for the remainder of the afternoon. In spite of this extra layer I yearned for my fleece during several brief periods, when the sky darkened and the wind picked up. 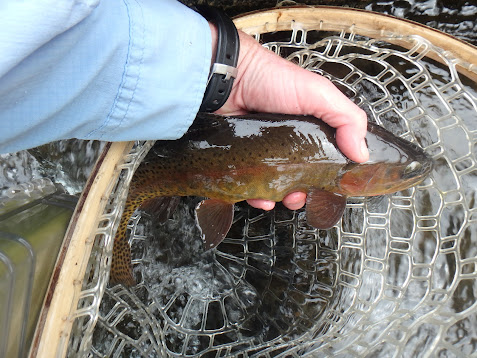 I began my quest for trout with a gray stimulator, but after ten minutes and no action, I moved on to a tan pool toy and beadhead hares ear. This combination was also ignored, so I added a salvation nymph to create a three fly lineup. For the next hour I moved upstream, and the dry/dropper alignment began to connect. Interestingly I netted five trout during this time period, and four smacked the tan pool toy. Midway through the progression I exchanged the salvation for an ultra zug bug, and the iridescent peacock nymph produced a trout as well. In addition to the landed trout, I hooked three decent fish that managed to escape, and consistent with fishing lore, these were the largest. 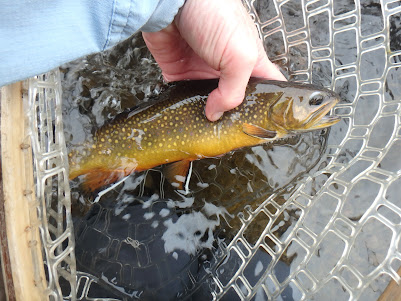 I covered a significant amount of stream real estate, and I learned that the deep slots and pockets were the most productive, and marginal water was largely barren. Among the first five catches were wild and colorful brook trout and cutthroats. I created a nasty entanglement near the end of this period, and the two front legs on the pool toy fell off in the process of unraveling the line. This circumstance prompted me to swap the two-legged hopper for a peacock body hippy stomper, and this move paid off handsomely.

Number six was a spectacular cutthroat that smashed the recently added hippy stomper; and the three fly combination of hippy stomper, ultra zug bug, and salvation nymph remained on my line from 3:00PM until 4:30PM, and they lifted the fish count from five to twenty. The catch rate accelerated with these three offerings, and during the late afternoon the nymphs took center stage, although the foam attractor continued to fool one out of every four fish. 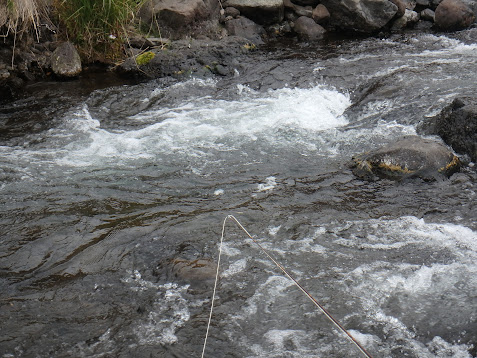 When I reached twenty, a few size sixteen mayflies made an appearance. They tumbled and fluttered on the surface in their efforts to combat the wind and become airborne. The hatch was very sparse, but I spotted four or five subtle rises in response to the emergence. I tossed the hippy stomper to a nice deep pocket, and an above average cutthroat refused the dry fly. I continued casting, and when the top fly was a few feet beyond the rejection point, I glimpsed a flash and splash. I responded with a hook set, felt momentary weight, and then the fish was gone along with three flies. What happened? I stripped the line in and discovered a curled end, and this typically indicates a poorly tied knot or abraded monofilament. 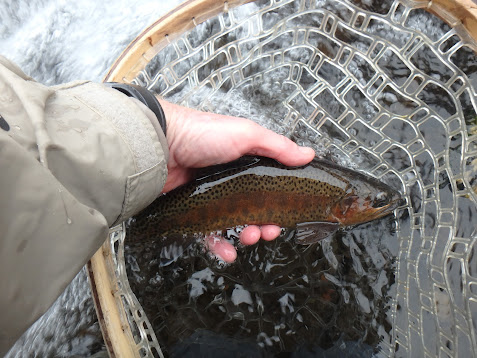 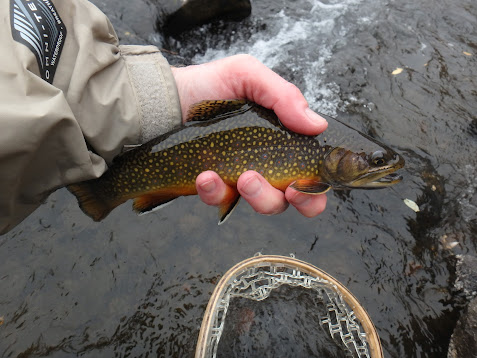 I Love the Orange/Blue Halo Spots

Before this dose of disappointment I spotted a rise in the vicinity of the original refusal, and since I needed to re-rig, I decided to try a size sixteen cinnamon comparadun, in case the rise was a response to a sparse pale morning dun hatch. I flicked a cast across from my position and allowed the very visible comparadun to drift through the tail of the pocket. Nothing. I repeated the ploy two more times, and on the third pass a head appeared, and the dun disappeared in a swirl. I reacted with a swift hook set, and eventually guided a gorgeous cutthroat into my net. I removed the comparadun, and before I snapped a photo, I noticed something glittering in the fish’s cheek. I inspected more closely, and I discovered my ultra zug bug and salvation nymph embedded in my hungry catch! I caught the same fish that broke me off minutes earlier! 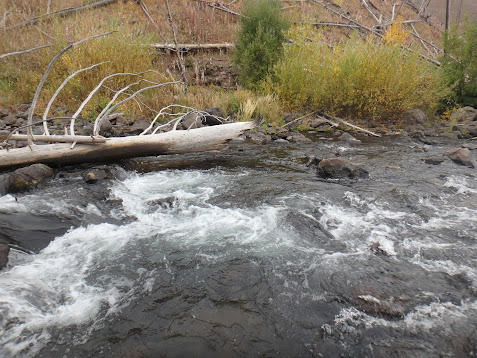 I continued with the comparadun, and it produced a small brook trout, but then I advanced to some faster water, and this created visibility problems, so I returned to the dry/dropper method. For the last half hour I tossed a size twelve Chernobyl ant combined with the ultra zug bug and salvation, and I boosted the fish count to twenty-five.

Wednesday provided a fun 4.5 hours of fishing with excellent results. Fall certainly arrived in the Flattops.