Location: Long pool near the campsite

After dinner and clean up I revisited the river by the campground with the hope of encountering the hatch that entertained me on Tuesday evening. I succeeded. By 8:10 PM I spotted several rises in the slower tail section, and I knotted a size 18 light gray comparadun to my line. In short order a fish gulped the fly, and my expectations soared, until I netted a fat whitefish. I was unable to extract the fly from the tiny lip-ringed mouth, so I eventually cut off the fly, although I probably killed the whitefish during the extended ordeal.

I replaced the comparadun with a size 16 caddis, and in the center of the pool a small rainbow inhaled it. By now the pool was alive with rising fish throughout its expansive area. I placed a nice cast toward the middle, and another solid take ensued. Once again my excitement morphed to disappointment, when a small whitefish flopped in my net. The magic hour was slipping away, and I had only a small rainbow for my efforts.

The fish seemed to ignore the caddis, so I reverted to a size 18 comparadun. This fly was totally ignored during the most intense surface feeding of the evening. Finally at 8:45 I flicked on my head lamp and returned to a size 16 light gray caddis. By now the fly was very difficult to follow in the dim light, so I cast above rises and executed the setting motion, when I approximated my fly to be in the vicinity of a rise. 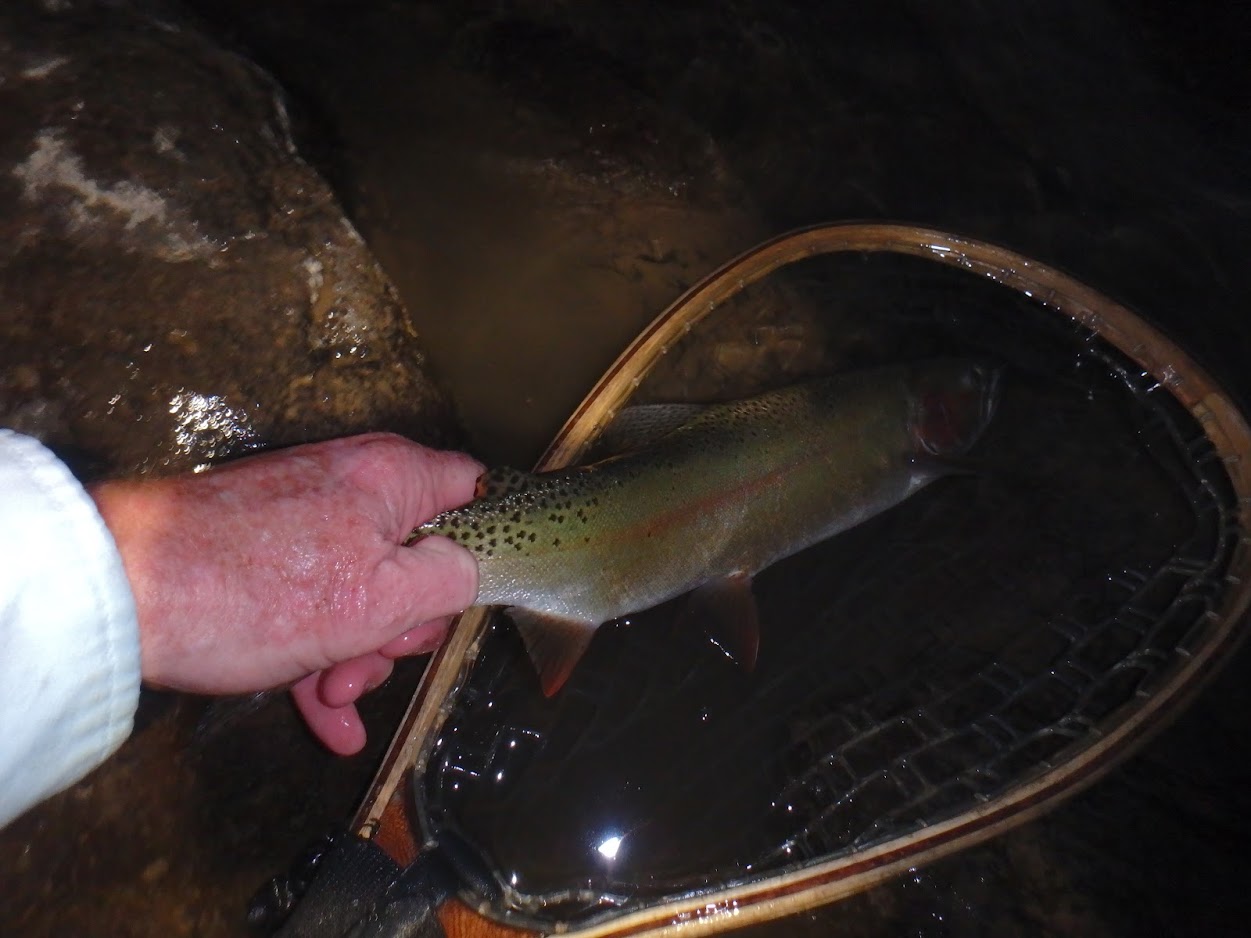 It worked. I lifted and felt weight, and some aggressive thrashing followed. This fish felt different from the whitefish, and indeed a sixteen inch cutbow eventually rested in my net. I snapped some photos and released the sought after prize, and then I dried my fly and resumed a last ditch effort to repeat the near dark success. I suspected that I spotted a pair of rises upstream near the bank in the faint glare. I shot a couple casts to the area, and when a barely visible dimple appeared, I set the hook. Another fish! Alas, this fish revealed itself to be another whitefish. Fortunately the hook was embedded in the outer lip, and a quick release was possible, before I ascended the bank and returned to the campsite in darkness.

For the second night in a row I fished to numerous rising fish next to the campground in waning light. I love the electricity associated with frequently rising fish, approaching darkness and feverish casting. I should do more evening fishing.