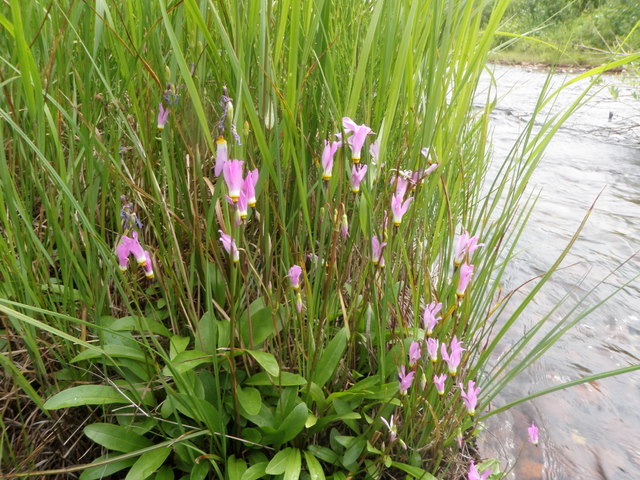 Jane and I had tickets to the Rockies game on Wednesday night, so I couldn’t travel as far as the Arkansas or Colorado to fish, so I chose to try the North Fork of the St. Vrain in Rocky Mountain National Park. In previous years I’d had some fine outings at this time of year on the St. Vrain. I arrived at the park entrance around 9:15 and parked across from Sand  Lake just inside the entrance gate. I began fishing at around 9:30. It was still overcast and a bit chilly with some dark clouds to the west, so I wore my raincoat in the morning.

I started at the RMNP border at the bridge over the road that is outside the park. As it turns out, I am not fond of this water. It is wide and shallow much of the time with few good areas that hold fish. I covered quite a distance and landed four trout, one brown and three brook. The brook trout tend to hold in slow moving areas with very little current. I was using a Chernobyl ant and caught the first couple on it, but switched to a lime green trude at some point. I recall catching one on the trude and the others on the Chernobyl. At around 10:45 I reached a long beaver pond and there were numerous sporadic rises. I cast my lime green trude and let it sit for the next 15 minutes or so. I had one refusal and that was it. I grew weary of the waiting game, so backed out away from the pond and retraced my steps and found the path back to the car. 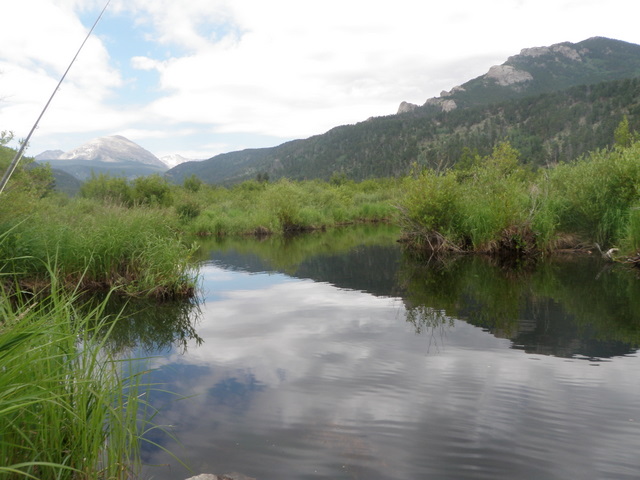 I drove further into the park and was stopped by a ranger telling me that the parking was full and I needed to park at the location where stopped. This was fine as I was close to the stretch of the stream where I wished to fish. I munched down my lunch as I sat on the tail of the minivan. Once I’d finished lunch, I gathered my fishing gear and hiked the horse trail to a spot just downstream from a bridge. Here I began the quest with the lime green trude still attached to my line. In the long pool just below the bridge I landed another brook trout on the trude. In a pocket nearly under the bridge a decent fish rose and floated under the fly, then took it, but I hooked the fish only momentarily. I had switched back to the Chernobyl ant as I was dissatisfied with the productivity of the trude. 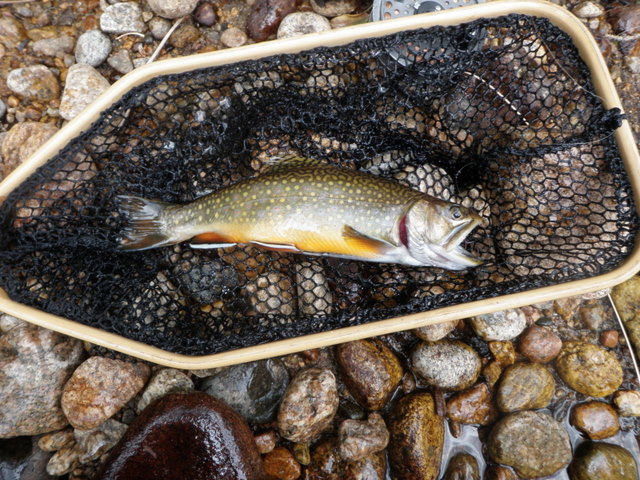 I advanced above the bridge and hiked up the path on the right side a ways as the water was fast with minimal holding spots. When I re-entered, I began prospecting with the Chernobyl ant and picked up fish fairly consistently. I was having great fun moving upstream and plopping the Chernobyl in the likely locations of fish. I began spotting occasional green drakes and other smaller mayflies emerging in the dappled light created by the sun overhead and the shade of the trees. When I’d caught and released twelve or so trout, the effectiveness of the Chernobyl seemed to wane, so I tied on a green drake comparadun. I should have done this sooner. In a stretch where the water hadn’t produced a look to the Chernobyl, three fish emerged and smashed the green drake. One was too small to count, one got off early, and I landed the other one. The trout were obviously tuned into green drakes. 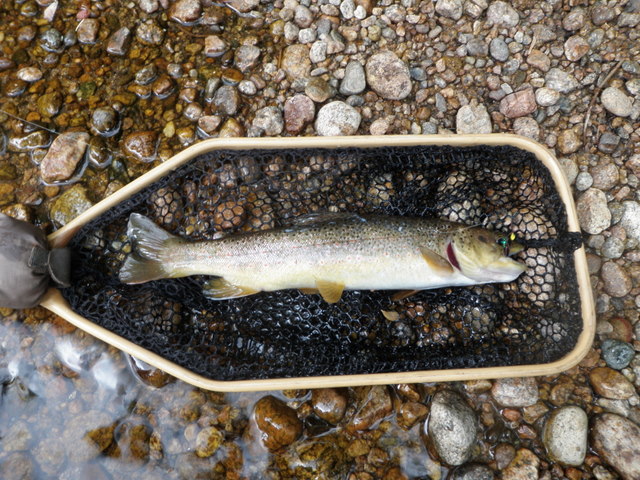 Unfortunately, I discovered this at around 1:45, and I needed to quit at around 2:15 to hike back to the car and return to Denver at the appointed time to go to the Rockies game. I landed two decent browns on the green drake to put my total for the day at 14. On the way back down the road, I decided to make a couple quick casts to the pocket below the bridge where I’d experienced a momentary hookup earlier. On the first cast, the nicest brown of the day emerged from the shadows and inhaled the comparadun with confidence. I landed and released the brown as a parade of horseback riders passed me on the bridge above. They complimented my catch, and I basked in the adulation of the tourists.