One of the by-products of my mitral heart valve surgery was getting introduced to many front-line health care workers within the Boulder Community Health network. Among my favorites is Meghan Gerlach, one of the anticoagulation pharmacists that I conferred with on nearly a weekly basis, while I adhered to a blood thinner regimen after my heart surgery. In one of the early appointments I mentioned my passion for fly fishing, and she informed me that her eleven year old son, Lucas, was an avid fisherman. Apparently Lucas experienced some success fishing for bass while visiting his grandparents cabin in Missouri, and he was keenly interested in advancing his capabilities in the realm of fly fishing. I volunteered to guide Lucas on a local stream or lake, once my arm and shoulder recovered sufficiently from my surgery, and when the covid19 threat was minimized.

Fast forward to August 8, 2020, and the two conditions described above were met, and Meghan and I worked out a plan, whereby I would meet them at Buttonrock Preserve for several hours of instruction and fishing. Boulder Creek in Boulder Canyon was my first choice, but ongoing road construction presented a formidable obstacle with forty-five minute delays and potential disruption of the stream clarity. My second choice was the North Fork of St. Vrain Creek in Laverne Johnson Park in Lyons, but an online search revealed that the park was closed due to the coronavirus pandemic. Knowing that the North Fork of St. Vrain Creek at Buttonrock Preserve offered more challenging conditions, I opted for it anyway, since it was relatively close, and the flows were in a reasonable range for a novice fly fisherman. The large parking lot offered a nice space to introduce some casting instruction, and I was hopeful that the attractive pools next to the parking lot might harbor a few willing trout.

I arrived at the Buttonrock Preserve parking lot at 9:45 and quickly secured one of the six remaining spaces. I prepared to guide Lucas by pulling on my waders, and I set up my Orvis Access four weight. Meghan told me in a text that Lucas had his uncle’s fly rod, but I wanted to provide an alternative. Lucas is saving money that he earns from chores to purchase a starter rod, and I wanted him to have a basis of comparison. As I waited for the two Gerlach’s to arrive, additional preserve visitors appeared, and the free parking spaces dwindled to two. I kept my fingers crossed, and the move paid off, as a white Toyota Sienna arrived and secured a parking space one car over from mine.

Friday’s weather was in line with the recent trend of a lingering heat wave, and the thermometer was already in the low eighties when we began. I pondered suggesting wet wading for Lucas, but he was wearing shorts, and I was concerned about sunburn and scratches, so he climbed into my backup waders and boots. In case you are wondering, he is eleven years old and already has a foot size equal to mine. He is shorter, and this caused the waders to bunch up a bit, but we made it work by shortening the shoulder straps and cinching the belt around his waist.

We began the outing with some casting practice in the parking lot, and although Lucas did not perfect dry fly casting, he advanced his abilities to the point, where I felt he was ready to attack the stream. We meandered to the edge of the creek by a nice starter pool, and I tied on one of the size 16 hippie stompers, that he showed me in his fly box. I directed his casts, and we worked through three or four nice pools and pockets, but neither of us saw any evidence of trout. The high sun and hot atmosphere dampened my confidence, but Lucas was undeterred.

I was reluctant to deploy a dry/dropper due to the risk of entanglement, but I decided to give it a trial. I swapped Lucas’s hippie stomper for one of my peacock size 12’s, and then I added a beadhead hares ear on a 2.5 foot dropper. Lucas managed the two fly system quite well with only a few minor tangles, but the trout in the North Fork were not cooperative. In one shallow run I took the rod to demonstrate how to flick a short backhand cast, and a small four inch brown trout grabbed the hares ear near the middle of the run. Lucas’s eyes grew wide, and I could sense that his level of determination elevated, after he actually held a small trout in his hand. 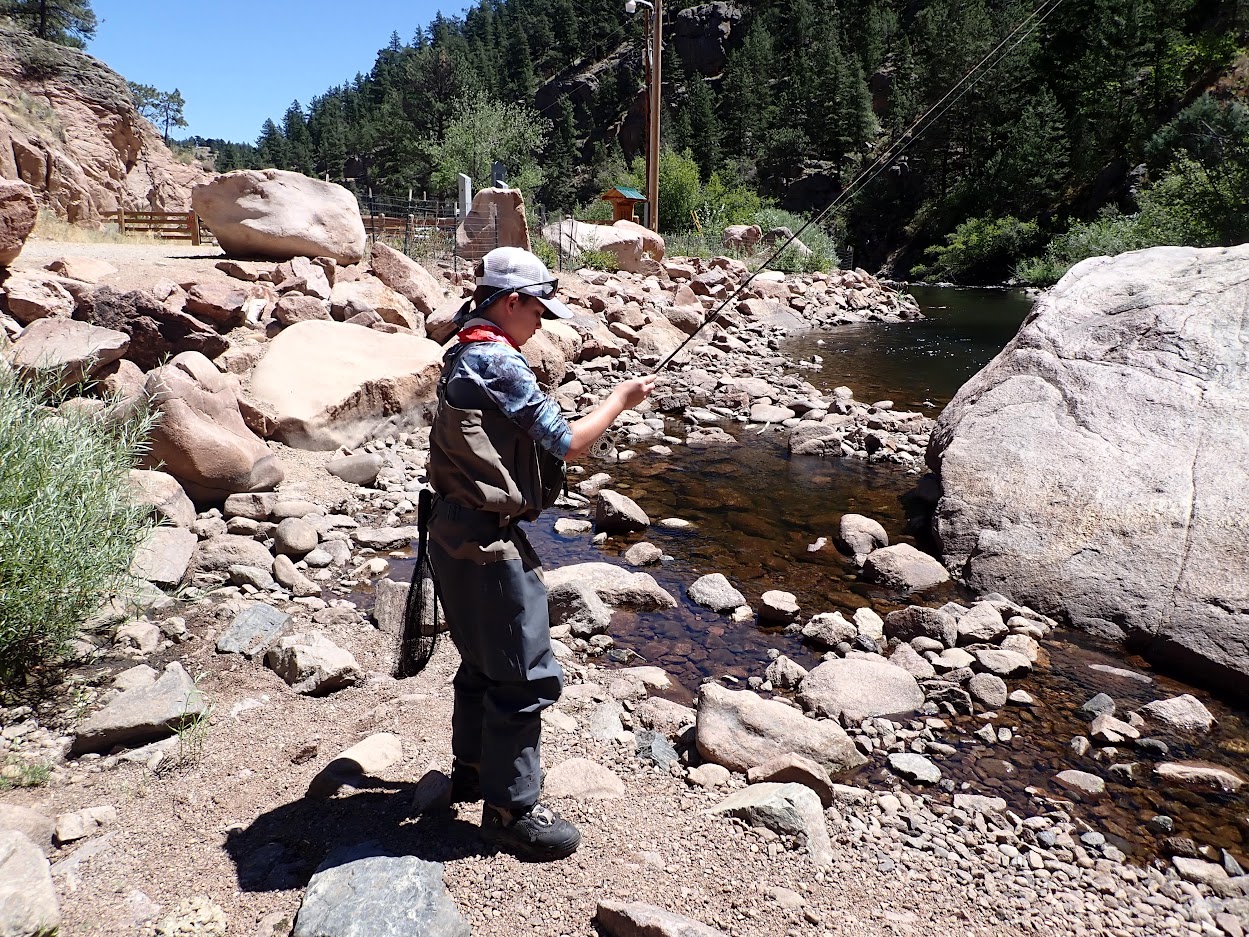 At noon we paused for lunch, and Meghan had moved the minivan closer to the western portion of the parking lot, so we made a short hike to the nearby van. While we munched our snacks, another angler returned to his car right next to us, and he had been fly fishing in Ralph Price Reservoir. I asked him how he did, and he extracted a nice fourteen inch rainbow trout from his bag. It was already gutted and ready for the grill, and he related that he caught it on a woolly bugger. Of course this merely served to get Lucas more optimistic about landing a fish from the North Fork of St. Vrain Creek. The neighboring gentleman also suggested that a good approach to the creek was a chubby Chernobyl trailing a beadhead pheasant tail.

Since our morning results could be described as futility, I adopted the suggested approach. I knotted a chubby Chernobyl with a tan ice dub body to Lucas’s line and then added a super nova nymph as a dropper. The super nova is a close approximation of a pheasant tail. Forty-five minutes remained in our allotted time, before Meghan needed to return to her father’s house to collect Lucas’s sisters. We escalated our focus and fished with intensity for the remainder of our time, but I am sad to report that Lucas failed to land a fish. I concentrated his casts to the whitewater spots at the head of the runs and pools under the theory that the trout sought oxygenated water during the high air temperature conditions. In one promising pocket along the right side Lucas flicked a nice cast next to the seam, and the chubby Chernobyl dipped quickly. Lucas responded with a quick side set, but nothing was attached to his line. I suspect this may have been his closest encounter with a fish.

At 1PM Meghan was ready to depart, so I climbed up some large boulders to join her. Lucas remained in the stream and executed several eleventh-hour casts in an effort to avoid a skunking. I was very impressed with his intensity and persistence, and I am certain he will grow up to be a first rate fly fisherman. He is thirsting for knowledge and willing to seek sources of instruction. These qualities should carry him a long way in fishing but also in whatever career path he pursues. I was very pleased to meet Lucas, and perhaps we can meet again when the temperatures cool in September or October.