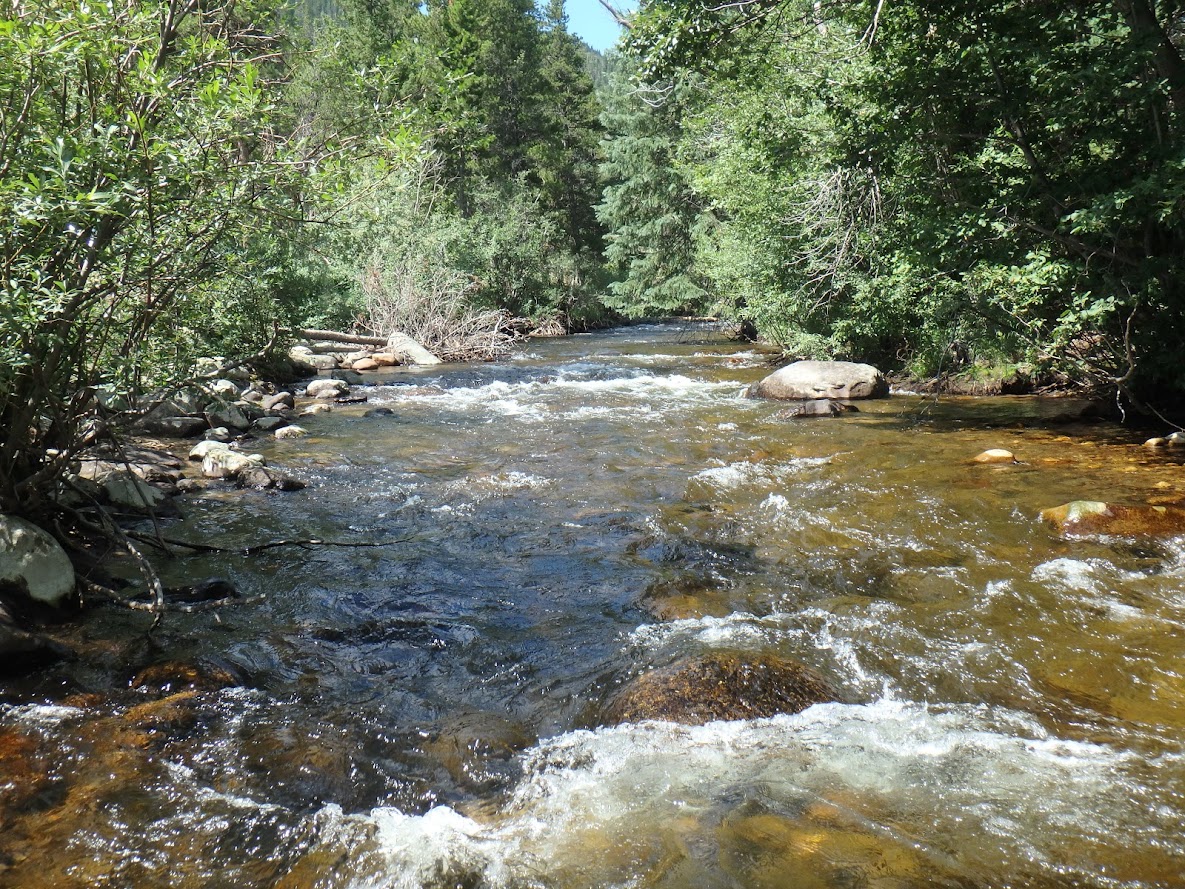 After a successful day on the Cache la Poudre River on Monday, I sought another Front Range fly fishing adventure for Tuesday, July 17, 2018. Unfortunately, I aggravated my mild case of tennis elbow on Monday, and now it mushroomed into a more severe situation. Would I be able to withstand back to back days of casting, and would the discomfort escalate to higher levels? I decided to take the risk, since I wanted to assess the extent of my injury.

After my review of my fishing reports over the last eighteen years, I logged my green drake encounters on front range streams, and this exercise revealed two instances in July when I successfully cast green drake imitations to resident trout on the North Fork of St. Vrain Creek within Rocky Mountain National Park. With this information tucked in my brain, I decided to make the trip to the small mountain stream in the Wild Basin area on Tuesday. Upon hearing of my plan Jane jumped on board, and we both departed from our home in Denver by 8:15AM.

A relatively uneventful drive enabled us to turn left on to the Wild Basin entry road by 9:45, and we slowly followed the winding narrow dirt road for a mile before we were halted by a young lady with a walkie talkie and a reflective vest. She informed us that all the parking at the trailhead was full, so I executed a tight three-point turn in the dirt roadway, and we found a parking space next to some picnic tables along the stream. Jane gathered the necessary gear to hike to Ouzel Falls, and I climbed into my waders and assembled my Orvis Access four weight in preparation for some stream time. 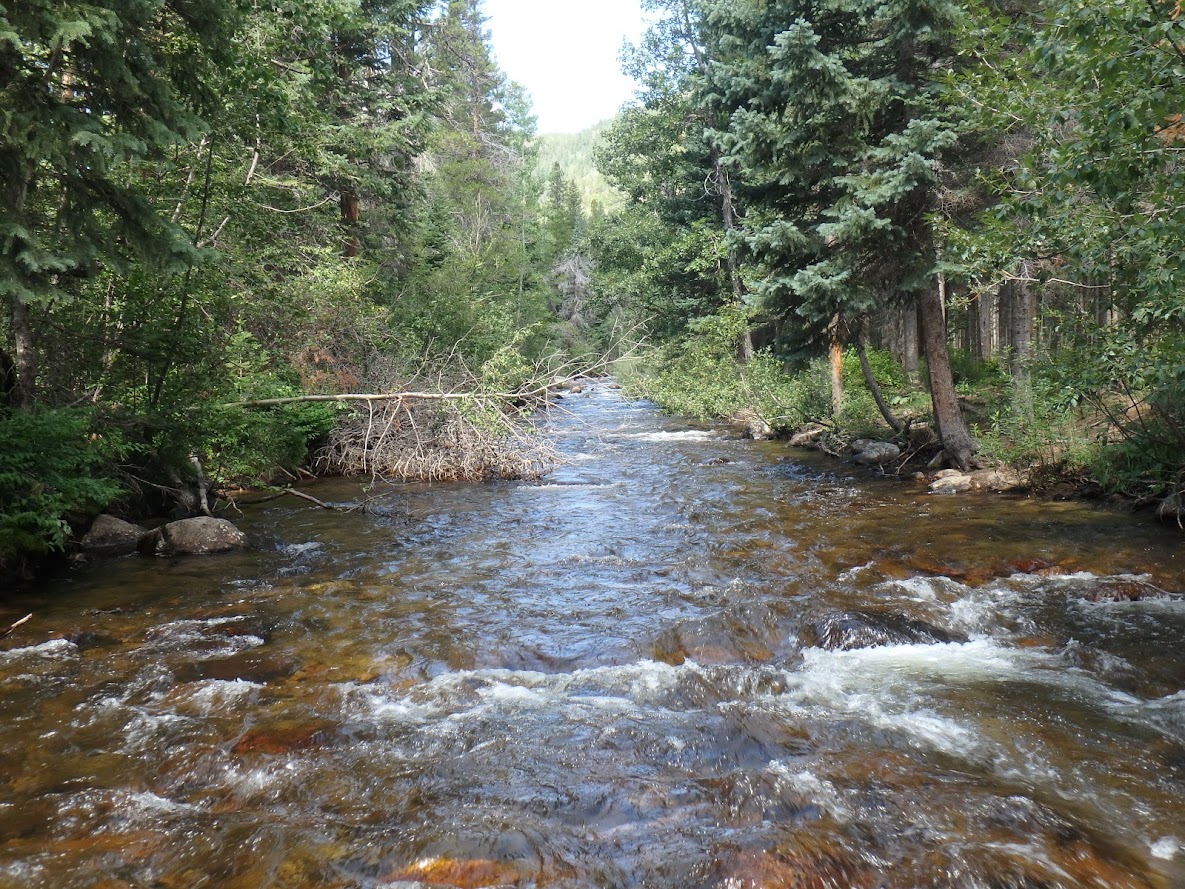 Flows Were Near Ideal

The air temperature was in the sixties and the stream appeared to be clear and near ideal flows. It had been a while, since I fished the narrow high gradient section of the North Fork in Rocky Mountain National Park, and I was anxious to see if it changed much over the intervening years. My stream notes suggested that historically I landed small brook trout and larger brown trout, but the ratio was roughly 60% brook and 40% browns. Would today’s experience match up to history? I asked myself these questions, as I strode along the dirt road at a brisk pace, until I reached the bridge that was .3 miles back toward the entrance. By now a string of cars was lined up along the narrow dirt road, and the RMNP guide was informing them that parking was full beyond the stopping point.

I walked to the middle of the bridge and gazed upstream and discovered two gentlemen in the creek approximately thirty yards above. One of the young men was wearing waders, and it appeared that a wide band stretched over the creek next to their position. At the time I assumed that they were fishermen, and they were using the band as a support for crossing the swift current. Later I concluded that the band was set up for slack lining over the water. Regardless of their intent, I circled through the woods and around them, until I was positioned a good distance above. They were no longer in view, as I knotted a size 12 olive stimulator to my line, and I began to prospect likely fish holding locations.

In the early going I experienced a mixed bag of success and frustration as exemplified by a 50/50 mix of takes and refusals. I landed five brook trout in the first thirty minutes, and none measured up to my standards for a photograph. The five that I counted were barely over my six-inch threshold. I felt that I was passing over catchable fish, so I snipped off the stimulator and swapped it for a size 12 Chernobyl ant, and below the ant I added a size 18 pheasant tail on a two-foot dropper. The Chernobyl was moderately more effective than the stimulator, and I built the fish count to eight, before I reeled up the flies and reconfigured the droppers. The pheasant tail was not carrying its weight, so I replaced it with a beadhead hares ear and then added a salvation nymph as the point fly. Although the Chernobyl accounted for three fish, it also generated its share of refusals. 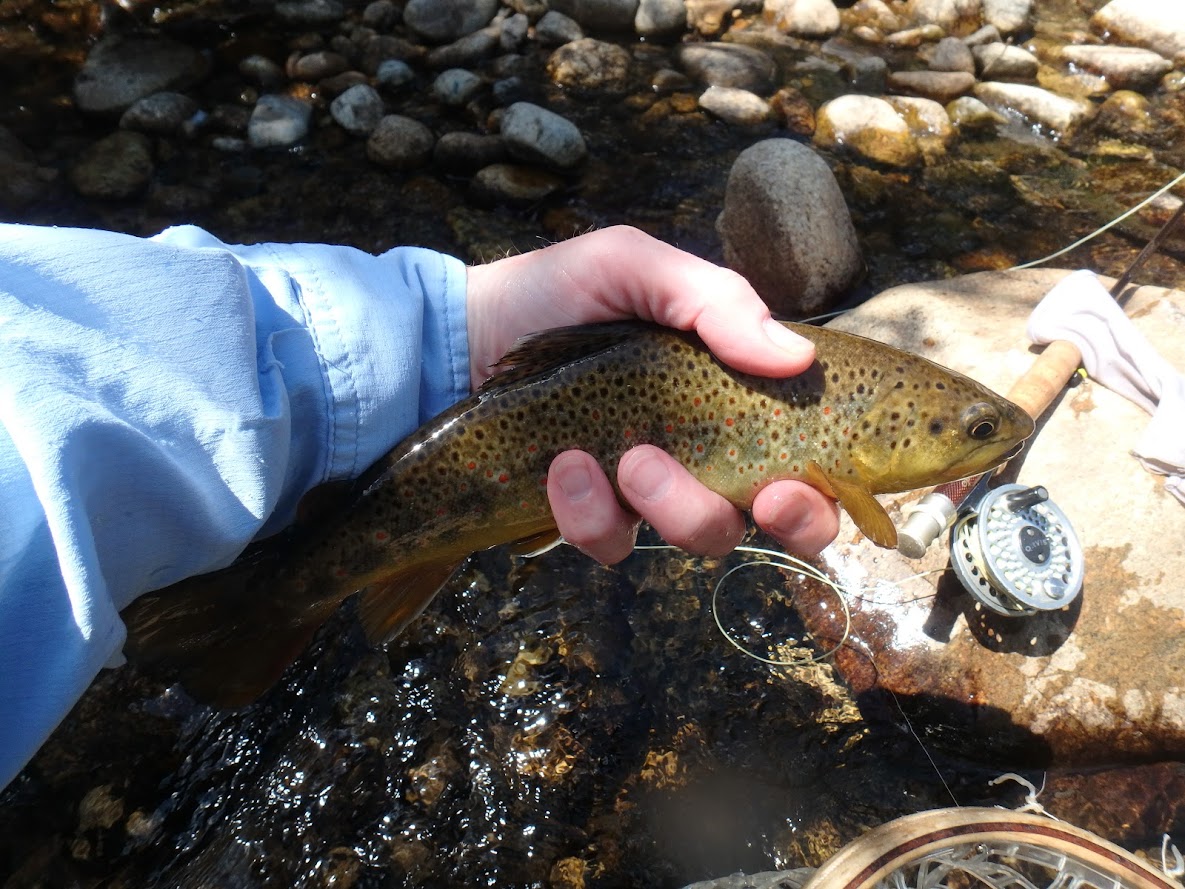 The three-fly dry/dropper combination improved the catch rate, and I incremented the fish counter to fourteen. Once again, the Chernobyl was the clear leader in attracting trout, but the salvation chipped in a few fish as well. In fact, the best fish of the day put a sag in my net during this time period. A small patch of slow water formed just upstream of a fallen angled evergreen. It was a marginal spot at best, but I decided to allocate a few casts. I lobbed three casts to the short space above the newly fallen evergreen, but after only a two-foot drift, I raised my rod to extract the flies, before they snagged one of the branches. On the fifth cast I decided to go for it. I cast farther toward the bank and then moved my rod tip to the right, which caused the trailing nymphs to sweep deep under the overhanging evergreen boughs. I was shocked, when I saw a thirteen-inch brown trout emerge from its hiding place, and it nabbed the accelerating salvation nymph, as it moved diagonally along the fallen tree. The fish hooked itself, and then I played it in the narrow stream and managed to prevent the battling brown trout from tangling around the numerous rocks and branches in the area. This scenario represented the high point of the day. 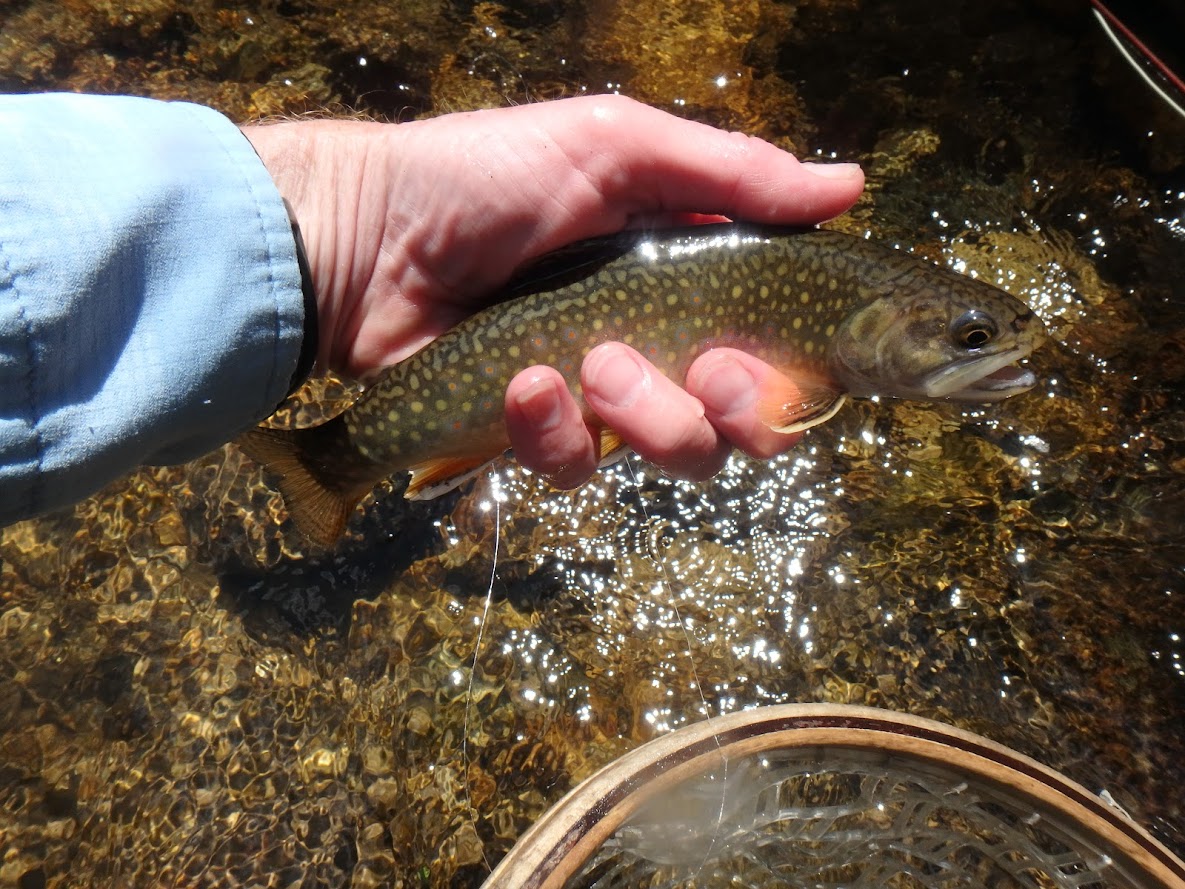 When I reached fourteen, I sensed that the action slowed measurably, so I once again implemented a change in tactics. I snipped the three flies from my line and reverted to a single stimulator. I deviated from the morning session and tied a size 14 gray stimulator to my line. For the next thirty minutes I prospected likely spots with the high floating attractor and increased the count to seventeen. I experienced quite a few refusals, but one nine-inch brown trout and two brook trout mistook the bushy stimulator for a natural food of some kind. As this scenario was unfolding, dark clouds appeared in the western sky and faint thunderclaps heralded an oncoming storm. A few large raindrops created wet imprints on my shirtsleeves, and I knew that the forecast predicted thunderstorms in the 1PM time frame. I stripped in my line and hooked the stimulator in the hook keep and returned via the dirt road to the Santa Fe.

After I removed my fishing gear and waders, I pulled on my raincoat and set out on the bridal trail that paralleled the road in search of Jane. The sky grew darker, and I was very pleased to encounter her after a brief eight-minute hike.

Tuesday was a reasonably successful day, as I landed seventeen fish in 2.5 hours of fishing. I had the stream to myself, and I moved quickly and covered a fair amount of stream mileage in a short time. The fish were small, but two brown trout encouraged me to continue seeking more surprises, and the brook trout made up for their lack of size with brilliant orange bellies. The area was crowded with park visitors, but they did not interfere with my fishing. The constant pinching sensation in my right elbow was an annoyance, but it did not prevent me from notching a fun day of fishing during the summer of 2018.