Location: From fork in the trail upstream to the pond below the dam

After working four days during the first week of May, I was looking for opportunities to fish on Saturday before run off kicked up in a major way. Jane was up for joining me on a trip depending on the destination. I checked out the flows and reports on Clear Creek, the North Fork of the St. Vrain below Buttonrock Reservoir, the South Platte at Deckers, and the Big Thompson below Lake Estes. The flows looked nearly ideal on the St. Vrain and the report from Rocky Mountain Anglers in Boulder was favorable, so we decided to make this our location for the day. Accessing the stretch of water below Buttonrock Dam involves a 30 minute hike on a dirt road that runs along the stream. Bikes and cars are prohibited, so this was a nice location for Jane to do some hiking.

We arrived at the parking lot by 9:45 and after a nice hike on the gradually graded road, I was in the water fishing by 10:30AM. We stashed our lunch and a stadium seat for Jane by some rocks between the road and the stream, and I walked back down the road beyond the spot where a second road cuts off to the reservoir. Jane meanwhile continued her hike to the dam and lake above.

I began with a yellow Charlie Boy hopper for visibility and good floatation and dangled a beadhead hares ear nymph 2.5 feet below the bend of the hopper. I methodically began working my way upstream and covered the likely holding locations. It didn’t take long before the hopper dipped and I landed my first small brown trout on the day. This continued until noon when I arrived at the series of nice deep pools across from where we stashed our lunch. I had landed five trout, four browns and one glimmering rainbow, and most of the fish came from obscure small pockets along the left bank as I faced upstream. One of the browns actually inhaled the large foam hopper. 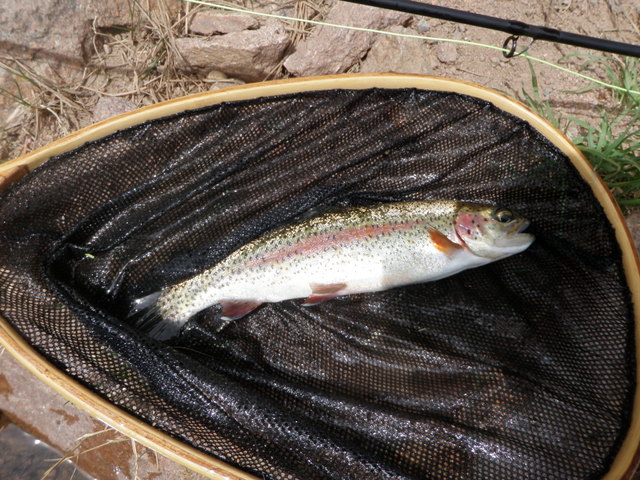 Jane had returned from her hike and was sitting along the road high above the stream. At the tail of the lower pool I landed a ten inch brown and watched a refusal in the current seam. I moved up a bit and cast to the top of the current and let the hopper drift downstream to the tail. After a five foot drift the hopper dipped and I set the hook and felt the temporary weight of a fish. Unfortunately the weight disappeared as quickly as it began, and I was disappointed to have flies back at my feet with no reward.

My focus was renewed by the near miss and I climbed some rocks to the middle pool and made some drifts through the center and spotted two refusals to the hopper. A trend was developing with hopper refusals, and I decided to switch to nymphs for this nice deep run after lunch. 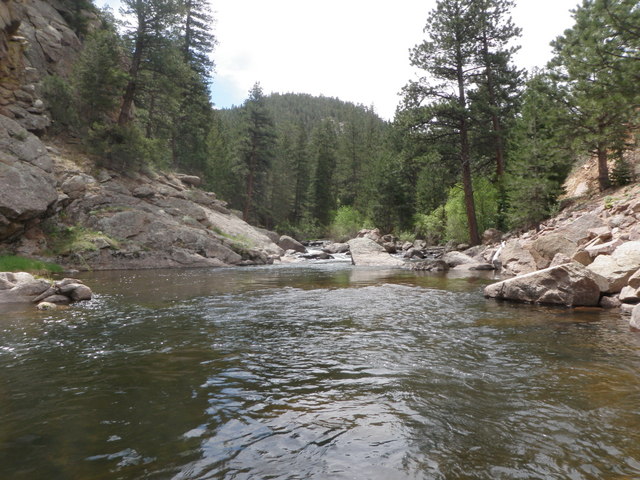 I climbed up the bank and joined Jane for lunch. She had hiked to the lake above the dam and observed quite a few fishermen and showed me some photos she’d snapped with her iPhone. The water level in the dam was already eight to ten feet below the high water line on the rocks. The lake had opened for fishing on May 1, and she spoke to a pair of fishermen who had caught one trout each. While we ate our lunches a man walked by with his two golden retrievers, and of course the dogs wanted to jump in the pool I had targeted for nymphs after lunch. After they jumped in and thrashed around a bit, he added to the mayhem by tossing some sticks and stones in the water.

After this disturbance I elected to fish the smaller top pool in the series and continue on my way upstream. I kept the hopper dropper on but added a size 22 beadhead RS2 below the BHHE as I began to observe a few small mayflies in the air. The sky was partly cloudy for the most part over the remainder of the afternoon. I’d fished for half an hour or so with no action, and I felt that I should be catching some fish, and I began seeing a few more BWO’s in the air, so I decided to try an indicator with split shot and two flies including the RS2. The top fly of the two was a bright green caddis pupa. Between 2 and 2:30 I approached a nice long run toward the middle of the river where the smooth slick fanned out to a nice slower moving pocket of moderate depth over a rocky bottom. On the first drift I observed a refusal to my red strike indicator. This usually happens a couple times during a season of fishing.

I put some more nice drifts through the attractive water and witnessed a pause in the indicator and set the hook and this time I was attached to a decent fish. As I played the fish I could feel the fish roll on top of the line and then felt the hook slip, but I was still attached to the fish. Apparently the fish had slipped the top fly but then got foul hooked by the trailing RS2. When I finally netted the fish I discovered a 15 inch lake trout. I inspected my flies and flicked them to the top of the long pocket and once again saw a pause and set the hook. This time I played a nice chunky rainbow to my net and photographed it. The rainbow had fallen for the bright green caddis pupa and represented the nicest fish on the day. 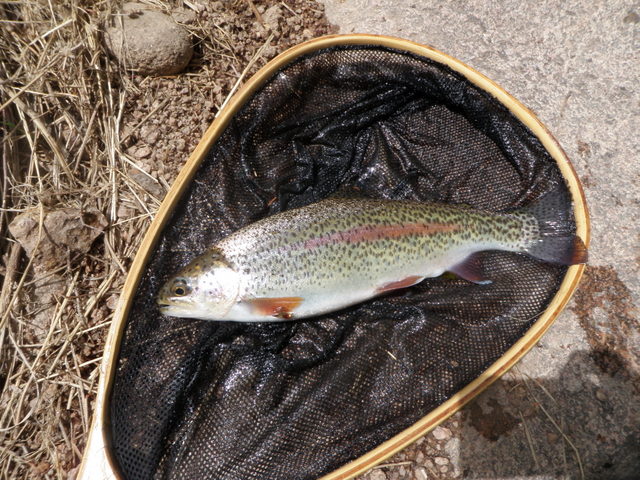 Could this spot hold more fish? This period represented the most intense BWO hatching time, as I observed 5-10 over a half hour period. Why weren’t the fish going for the RS2 instead of the bright green caddis? I made a couple more casts and tried the jigging action that worked on the Arkansas with periodic quick tip lifts as the flies tumbled through the sweet spot and I was rewarded with a hit and felt the throbbing of my rod. This fish cleared the surface of the water and I could see that it was brown, but for some reason after it re-entered the water it came free. I brought my flies in to inspect and realized that the line broke at the knot just below the split shot, so I assume it weakened with the fishing and occasional snags on sticks and rocks. I’d now hooked a rainbow, a lake trout and a brown in this relatively obscure deep slot. 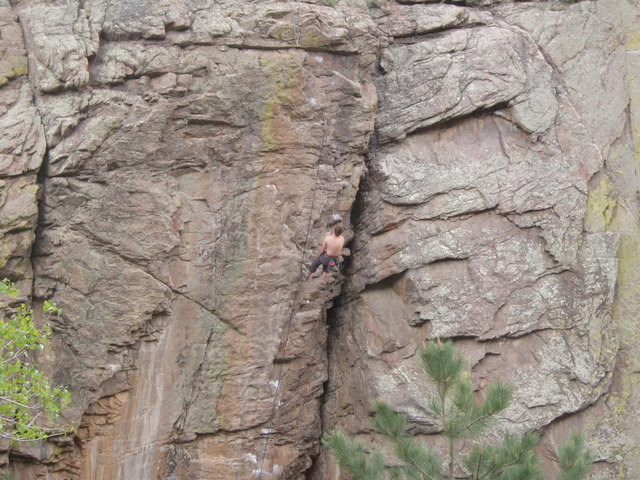 After some additional unsuccessful probing of my hot spot I moved on up the stream and managed to land one more small brown on the bright green caddis pupa. The water between my hot spot and the settling pool below the dam was largely unattractive with fast white water and small pockets that didn’t hold fish. I reached the settling pool and hiked back down the road and found Jane in her stadium seat reading her Kindle. I dropped down the nice run that had been disturbed by the dogs and ran my nymphs through the sweet spot. I did manage to have a momentary hookup at the tail of the run as I applied the lifting action to the flies, but that was the extent of the action. Jane was ready to pack it up and return to the car, so I called it a day at 3:15 or so.