A forecast of high temperatures approaching seventy degrees dictated a day of fishing on Friday, March 6. My last outing was February 1 on Boulder Creek, so I was overly anxious for another winter trip with spring in the air. I checked the flows on several front range options, but rather quickly I settled on the North Fork of St. Vrain Creek in the Buttonrock Preserve. The DWR chart exhibited steady flows in the 20 CFS range, and I knew from prior experience that these were decent numbers for a day of winter fishing. Temperatures in Lyons, CO, the closest town, were expected to peak in the upper fifties.

I departed Denver by 8:30, and after a brief stop for fuel, I arrived at the parking lot for the Buttonrock Preserve by 10AM. Several fishermen were gearing up, but my process was apparently more efficient, since I was on the trail by 10:20. Before my departure on Friday morning, I viewed a video on how to utilize the New Zealand strike indicator, that I received for Christmas, and I was impressed with how easy it was to add and remove from my line. 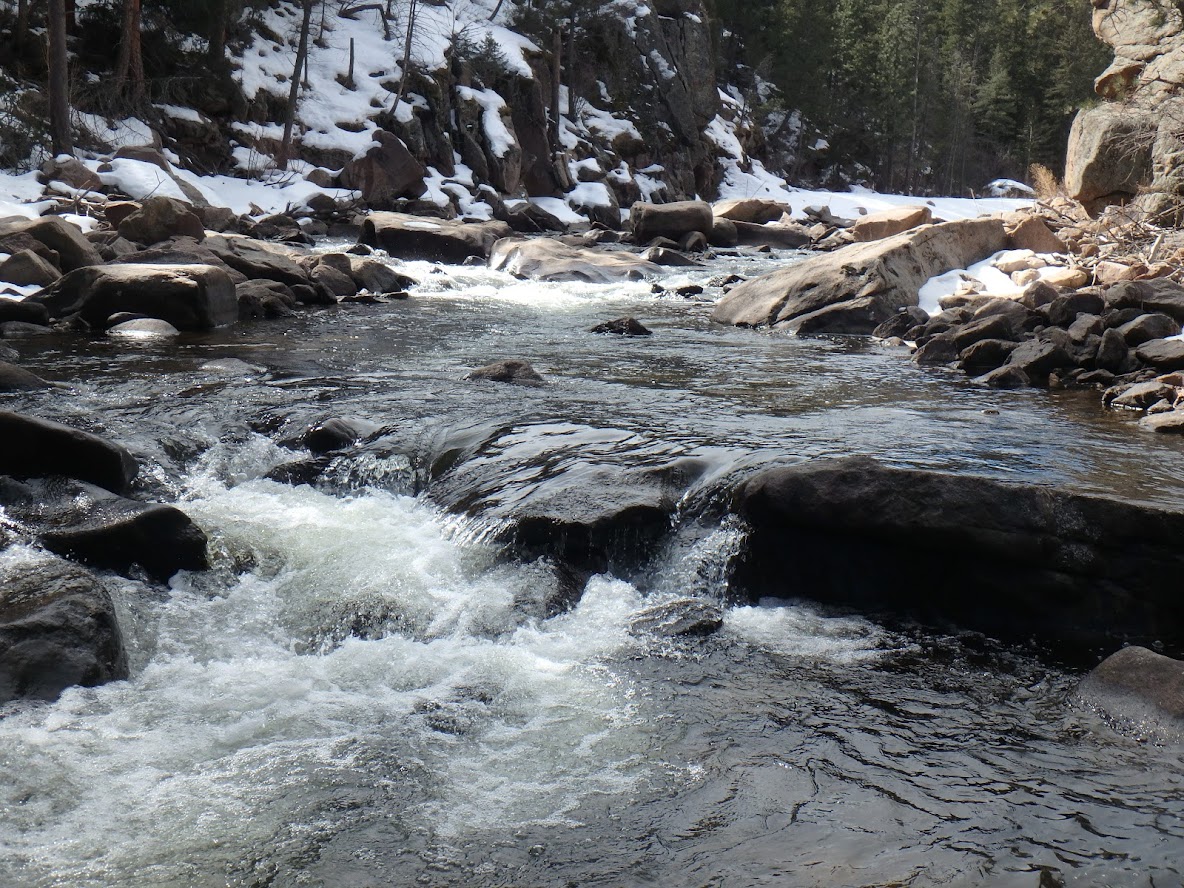 The access road was alternately dry, muddy and covered with ice and snow; but, I hiked for thirty minutes and arrived at a satisfactory starting spot and carefully backed my way down a steep rocky bank to a section of the creek that contained a series of short deep pools. I began my quest for winter trout with a peacock hippie stomper, beadhead hares ear nymph and Pat’s rubber legs; but after forty-five minutes of fruitless casting and covering a substantial distance, the fish count stalled on zero. I was bordering on frustration but reminded myself that the water remained quite cold, and warmer afternoon temperatures portended more active fish. During the morning time period I swapped the Pat’s rubber legs for an ultra zug bug and a salvation nymph. 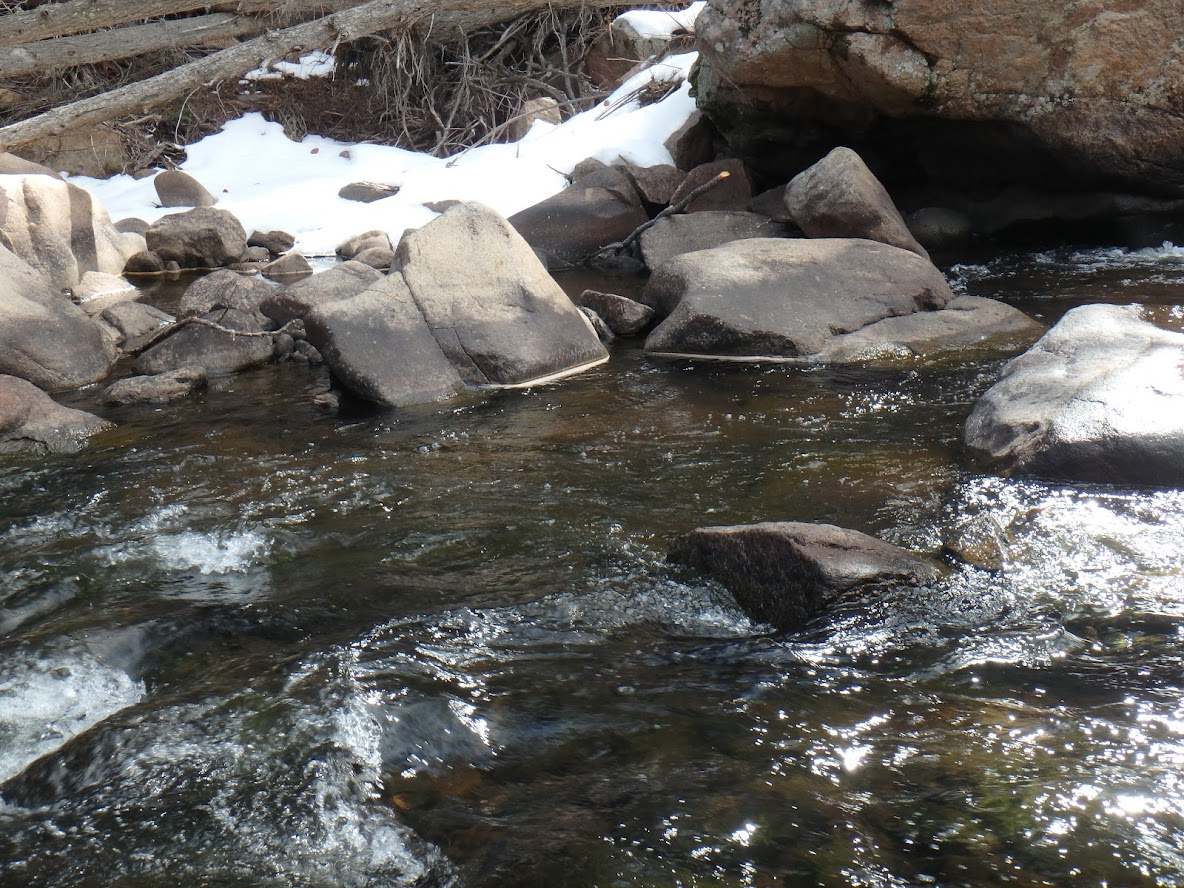 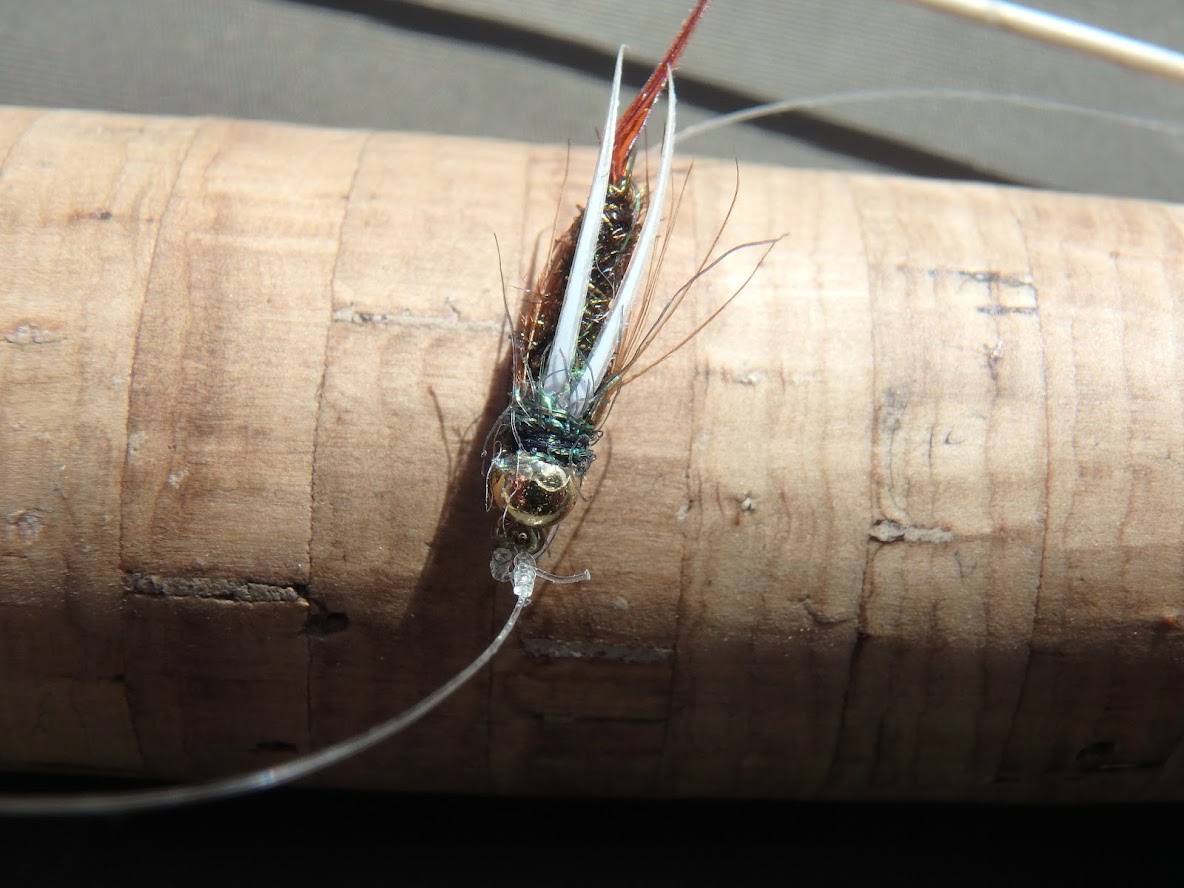 At 11:45 I found a nice open area with large rocks perfect for lunch, and I took advantage to consume my light snack. After lunch I decided to modify my offerings, and I exchanged the hippie stomper for a size 8 yellow fat Albert and replaced the hares ear and salvation with a prince nymph and Craven soft hackle emerger. A tiny gray stonefly perched on my hand during lunch, and the soft hackle emerger was an attempt to mimic the size 18 insect. 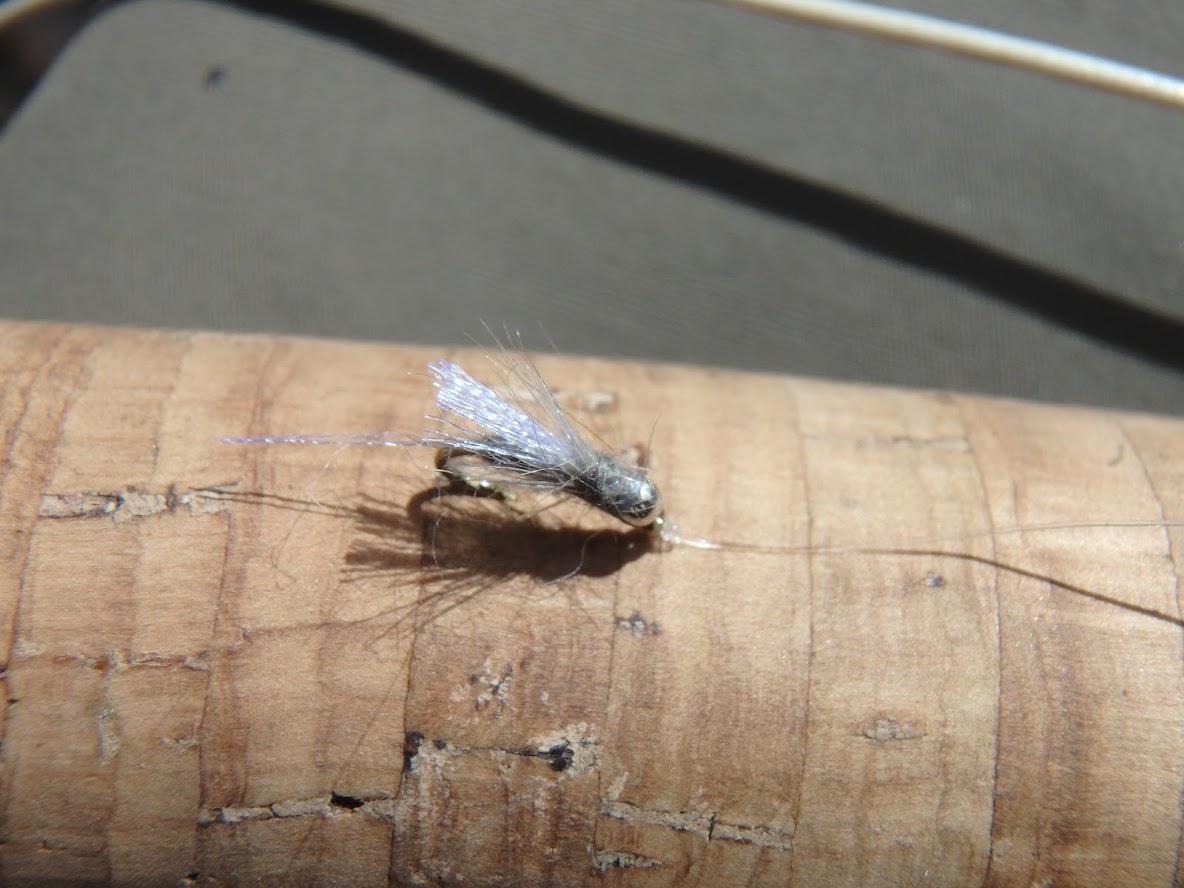 Finally after another fifteen minutes of casting, a fish slashed at the fat Albert, but a momentary connection was my only reward for an instinctive hook set. I did not wait long, however, before a nice ten inch brown trout crushed the fat Albert in a slow shelf pool on the opposite side of the creek. This prize did not escape, and I lifted the deep buttery colored brown into my net and snapped a few photos. I continued my progress upstream in the early afternoon and netted two small rainbow trout. They were both barely over six inches, and one grabbed the prince nymph, while the other nabbed the soft hackle emerger.

As I continued upstream, I arrived at a relatively deep but short pool, where the creek deflected off a large collection of branches and sticks. I spotted several fish at the tail of the pool, but they rose to inspect the fat Albert but resisted the temptation to eat. I decided to change tactics, and I removed the three fly dry/dropper configuration and tied on a size 18 stonefly adult. This fly prompted a refusal, and then it was treated with total disdain, so I once again executed a change. I replaced the small stonefly with a size 22 CDC olive hoping to cover a midge or blue winged olive natural. The move partially paid off, when a ten inch rainbow darted from the stick bramble and inhaled my imitation. I set the hook and played the fish for fifteen seconds, at which point it twisted free of the small dry fly. 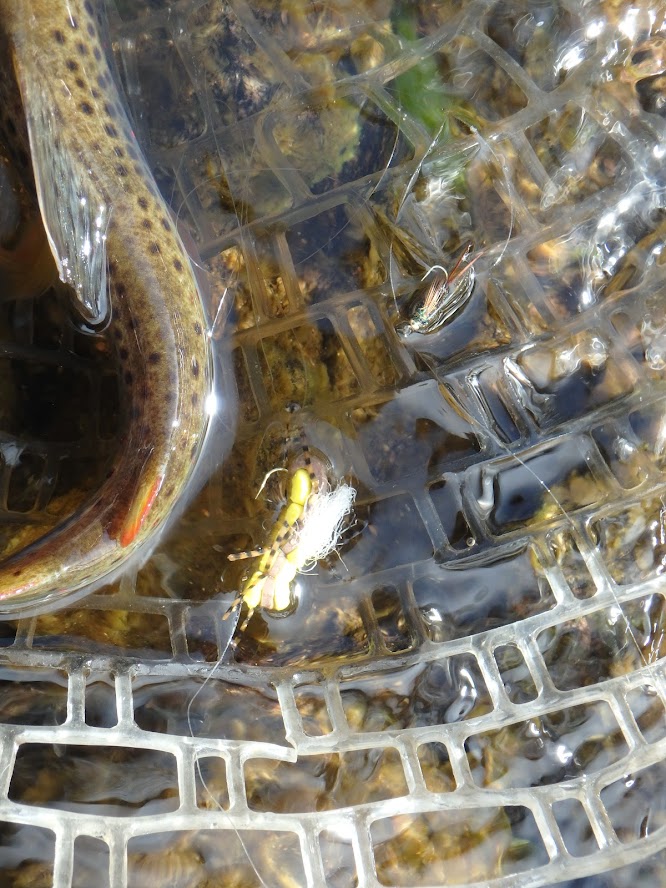 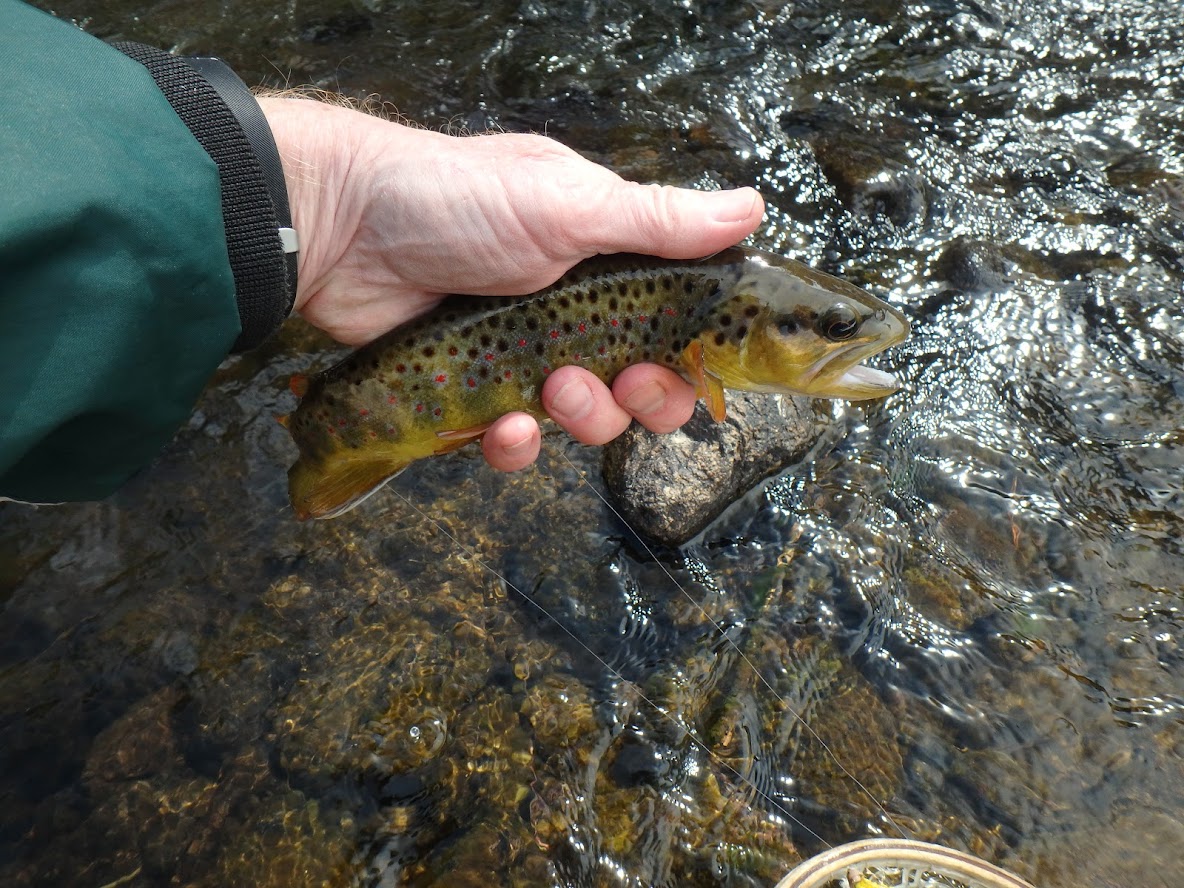 I was back to the drawing boards, and I retained the small olive, as I encountered another long slow moving pool. Unfortunately the CDC olive proved to be a one fish wonder, and I once again contemplated a move. I remembered the New Zealand indicator system and decided to test it out. I crimped a split shot to my line and then deployed the indicator four feet above the split shot. For flies I chose a prince nymph and a sparkle wing RS2. The deep nymphing system lasted for thirty minutes, and I added a fourth trout to my count in the form of a six inch brown trout that struck the RS2. I grew weary of the indicator style of fishing and decided to try one last ploy before ending the day. 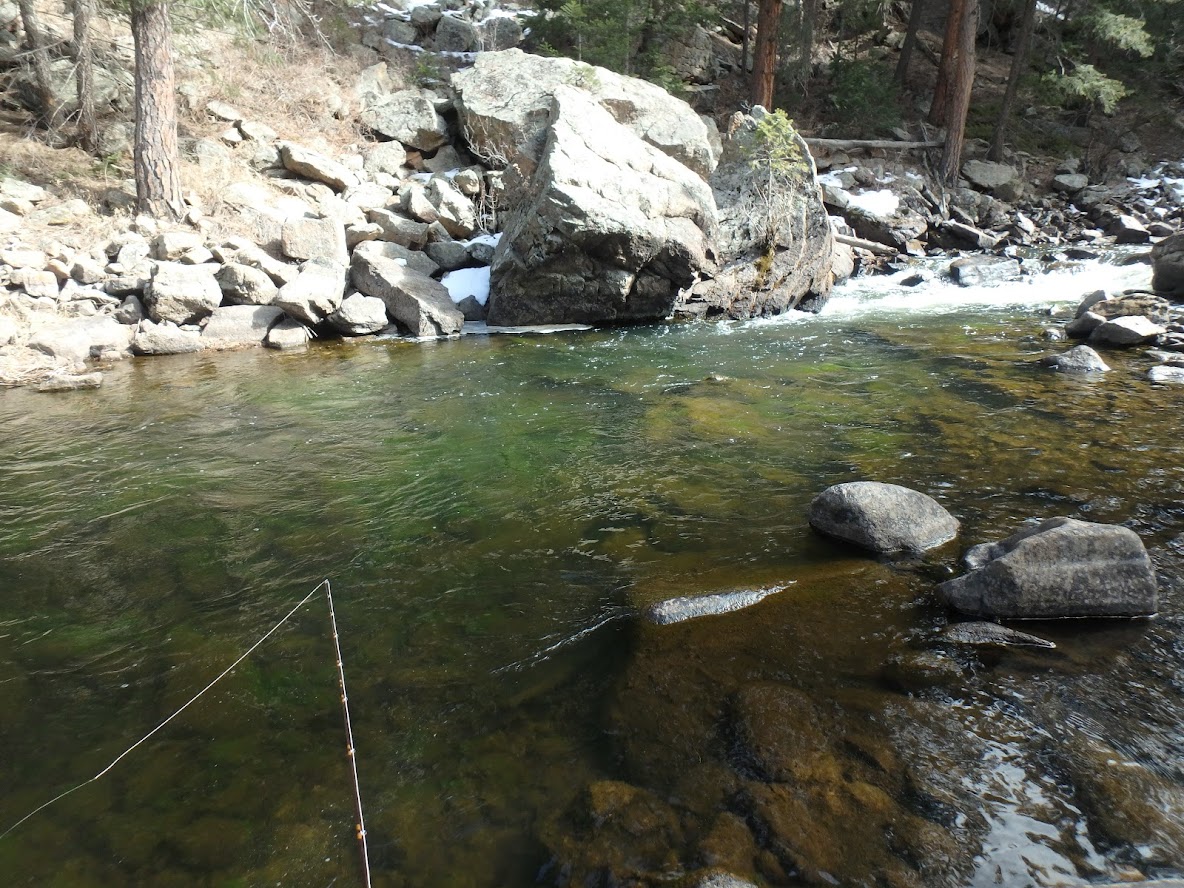 I inspected my fly box and focused on a size 14 gray stimulator. This struck me as a solid lead fly, and below it I knotted the RS2. I flicked the large dry fly to the top of a nice pool and tight to a vertical rock wall and allowed the two fly combination to drift along the rock and then across from me and downstream. On the third such pass a six inch trout nipped the sparkle wing, just as I lifted to make another cast, and fish number five rested in my net for a short amount of time. I progressed upstream a bit farther, but once again my fly was ignored, and at 3PM I decided to call it a day.

Friday was a gorgeous day from a weather perspective; however, the fishing was quite slow. I managed to land five trout during four hours of concentrated fishing with the largest being a ten incher that savored the fat Albert. The air temperature rose to the upper fifties, but the melting snow fields along the creek reminded me that winter was relinquishing its grip at a slow pace. I’m sure the melting snow kept the water temperature below the level required to promote more active feeding. The five day forecast projects more days with highs in the sixties, so I plan to venture forth on another early season fly fishing expedition.